The trove of Titanic artifacts headed to auction all belonged to fifth officer Harold G. Lowe — who saved dozens of lives on that ice-cold night in the Atlantic. 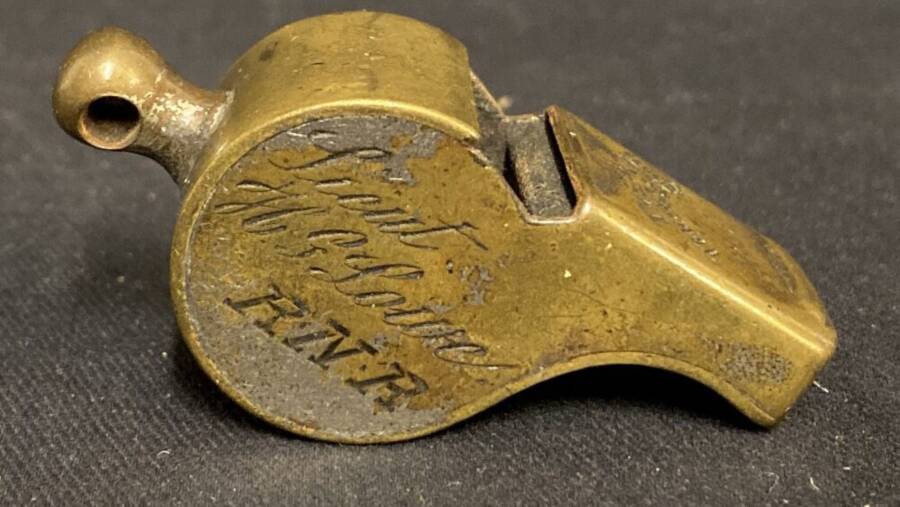 Henry Aldridge & SonIt’s unclear whether Lowe blew this exact whistle that night, though the fact that it belonged to a true hero is yielding interest enough.

In April 1912, the RMS Titanic sank to the bottom of the Atlantic Ocean — taking over 1,500 passengers with it. An invaluable collection of items belonging to a heroic officer who survived that terrible shipwreck is now headed to auction.

According to Fox News, these items belonged to fifth officer Harold Lowe. Revered as one of the heroes of the tragic incident, Lowe not only potentially served as the literal whistleblower of the maritime disaster — but commanded the 14th lifeboat and rescued survivors from the icy waters.

After delivering the passengers on his lifeboat to safety, Lowe was the only officer to go back to the wreck to pull more survivors out of the water. In James Cameron’s movie version, he’s depicted as rescuing Kate Winslet’s Rose during this brave return.

Lowe, who was born in North Wales and respectfully portrayed by Welsh actor Ioan Gruffudd, was 29 at the time of his Atlantic heroics and remained a sailor after the incident. He died in 1944 at 61 years of age. This is the first time any of these items from his archive have been up for auction. 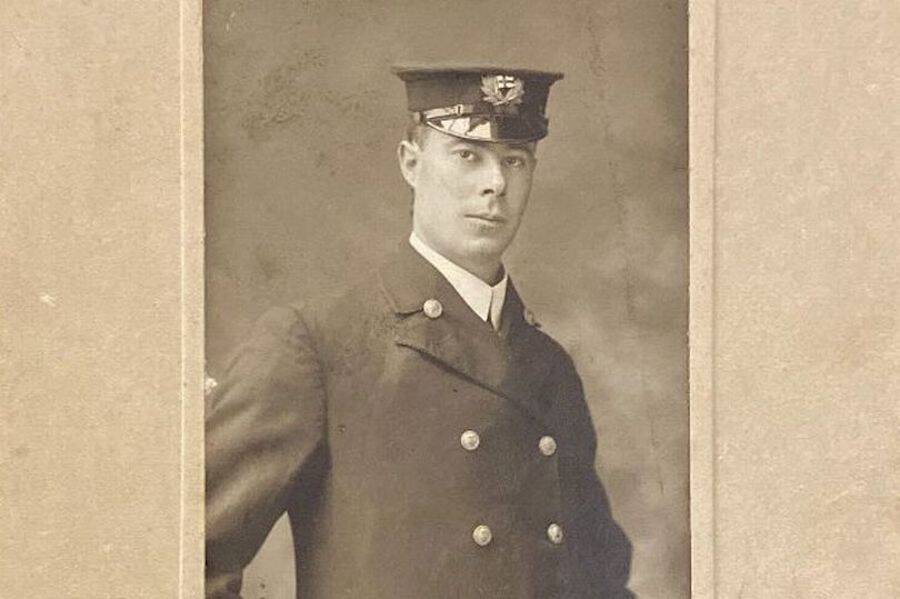 Henry Aldridge & SonLowe remained a sailor after the disaster, and died at 61 in 1944.

“Harold Lowe was without doubt one of the heroes of the Titanic disaster,” said auctioneer Andrew Aldridge of the British auction house in question, Henry Aldridge & Son. “As he loaded women and children in the lifeboats it is said he ordered J.Bruce Ismay, the managing director White Star Line, to get out of his way, telling him ‘you will have me drown the lot of them’, if he didn’t.”

No other officers dared turn back toward the wreck, as they feared desperate and freezing survivors would overwhelm the boats. Lowe’s unique bravery has been celebrated ever since, imbuing even his whistle with deep significance.

Though Aldridge is careful to note, “It is unknown if this was the whistle Officer Lowe had on Titanic, however it is without doubt his Officer’s whistle.”

The whistle, engraved “Lieutenant H.G. Lowe RNR” (Royal Naval Reserve), is listed with a pre-sale estimate of $2,526 to $3,788. The auction’s vast roster of items also includes a signed photo of the Titanic‘s officers aboard the rescue ship Carpathia, a telescope, and more. 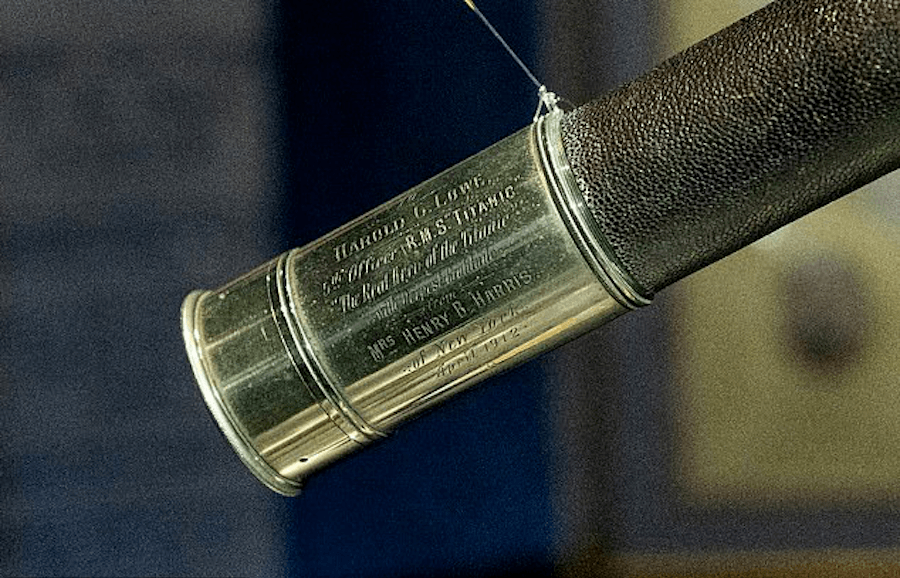 Henry Aldridge & SonThe engraved telescope gifted to Lowe was inscribed with “To Harold G. Lowe…The Real Hero of the Titanic.”

Lowe can be seen in a group photo being auctioned off along with his whistle. The group photo, taken aboard the Carpathia, shows 13 leading officers who survived.

This image is not only signed by all 13 men, but by the Carpathia‘s captain Arthur Rostron as well. It currently has a pre-sale estimate of $7,578 to $12,628 — a notably steep increase from the price of Lowe’s whistle. 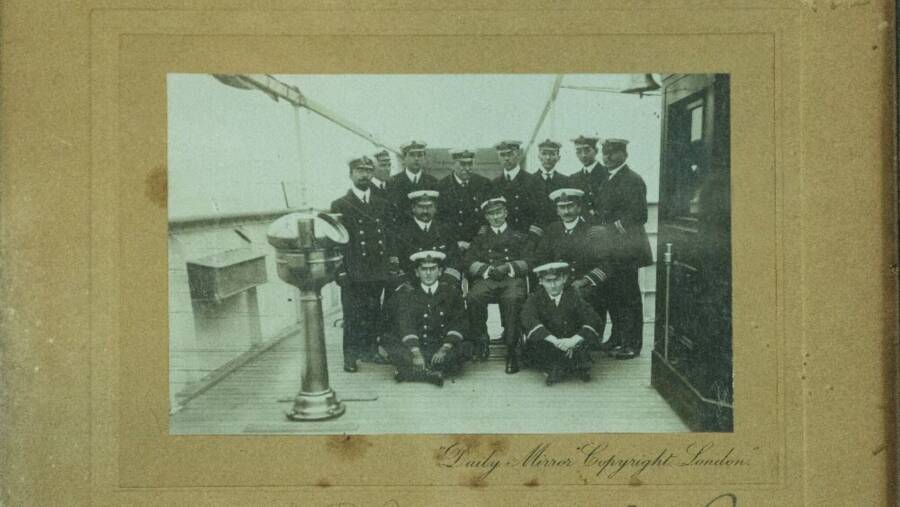 Henry Aldridge & SonThis photo was signed by all 13 Titanic officers depicted, as well as the Carpathia captain whose ship it was taken on.

The archive also includes a telescope given to Lowe by one of the survivors in abject gratitude, which was inscribed with “To Harold G. Lowe…The Real Hero of the Titanic.” It was gifted to Lowe by a woman who Lowe rescued from the sea that night.

Additionally, a watercolor that Lowe painted of the Titanic and his certificate of competency as a master of the ship are expected to fetch substantial sums. 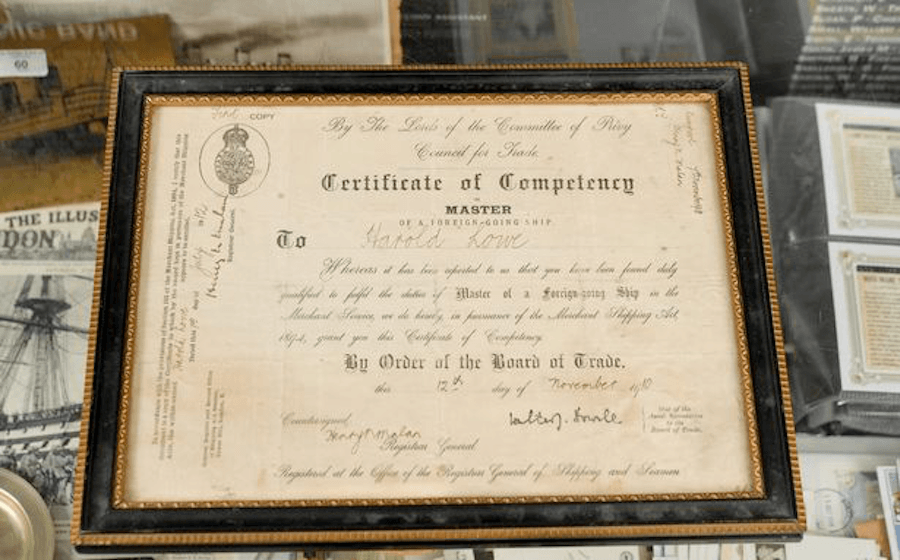 Henry Aldridge & SonLowe’s certificate of competency was reprinted after the disaster took his original to the bottom of the ocean. Nonetheless, it’s a prized item.

“These items have never been seen or auctioned before,” said Aldridge. “Harold is venerated by the Titanic community as the officer who went back.”

All in all, the archive of items is expected to yield around $75,000 when the auction comes to a close on June 20, 2020. For a collection of a handful of items more than 108 years old, that’s rather remarkable.

After learning about the whistle of Titanic officer Harold G. Lowe and other items going up for auction, read up on some astounding Titanic facts you’ve never heard before. Then, watch the only footage of the Titanic before it sank.