These little-known Titanic facts are sure to surprise you--and give you the chills. 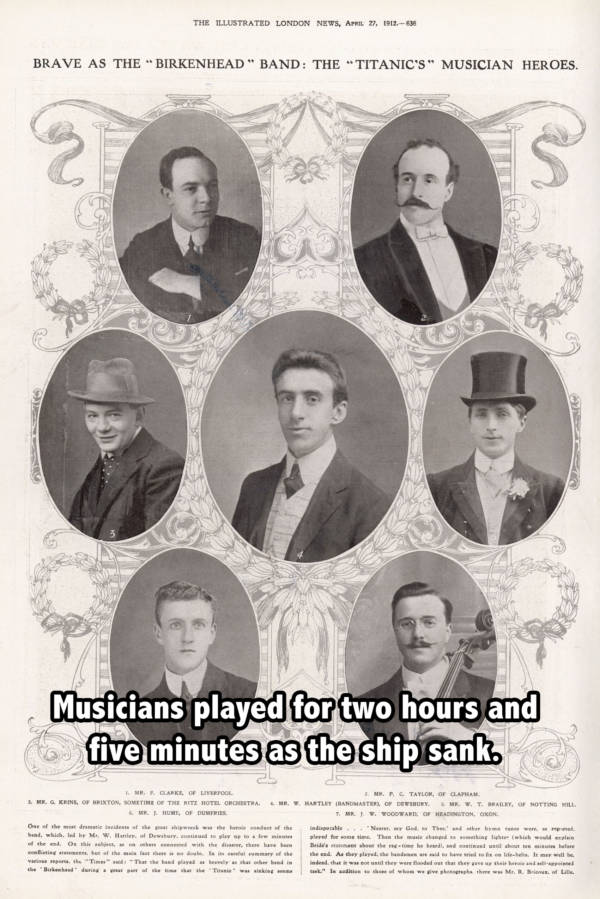 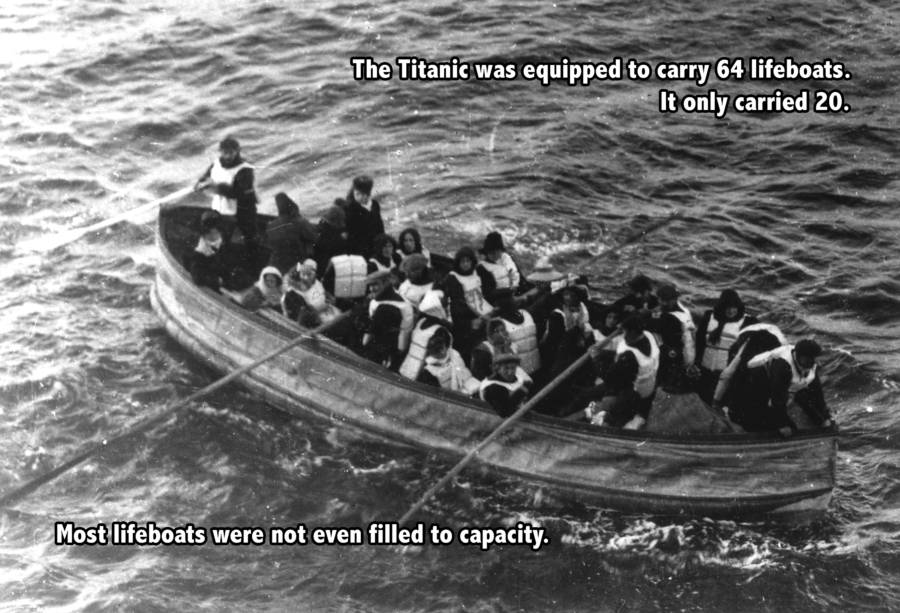 The Titanic was equipped to carry 64 lifeboats. It only carried 20. Most lifeboats were not even filled to capacity.Wikimedia Commons 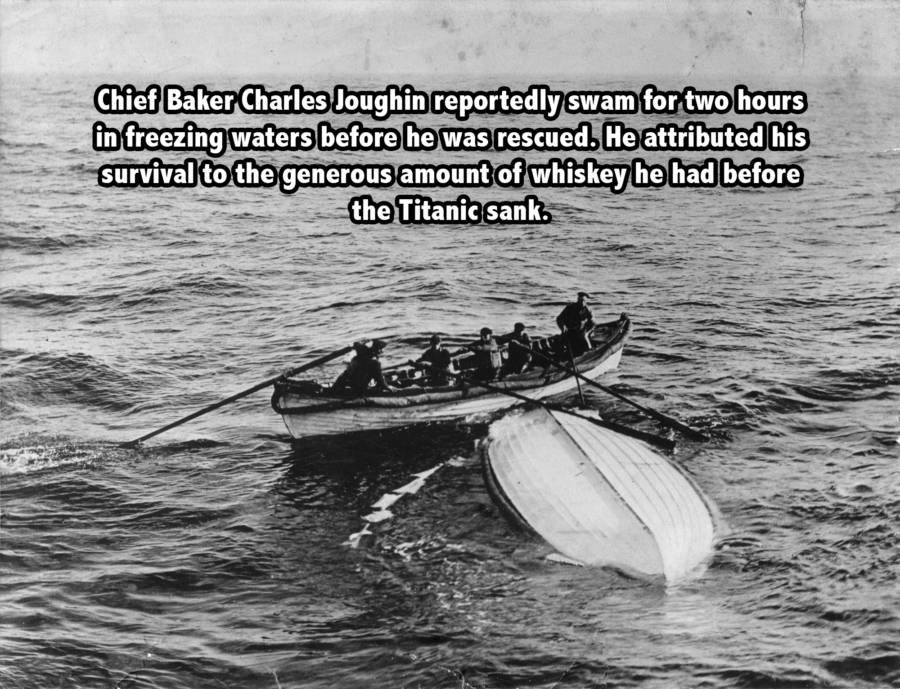 Chief Baker Charles Joughin reportedly swam for two hours in freezing waters before he was rescued. He attributed his survival to the generous amount of whiskey he had before the Titanic sank.Wikimedia Commons 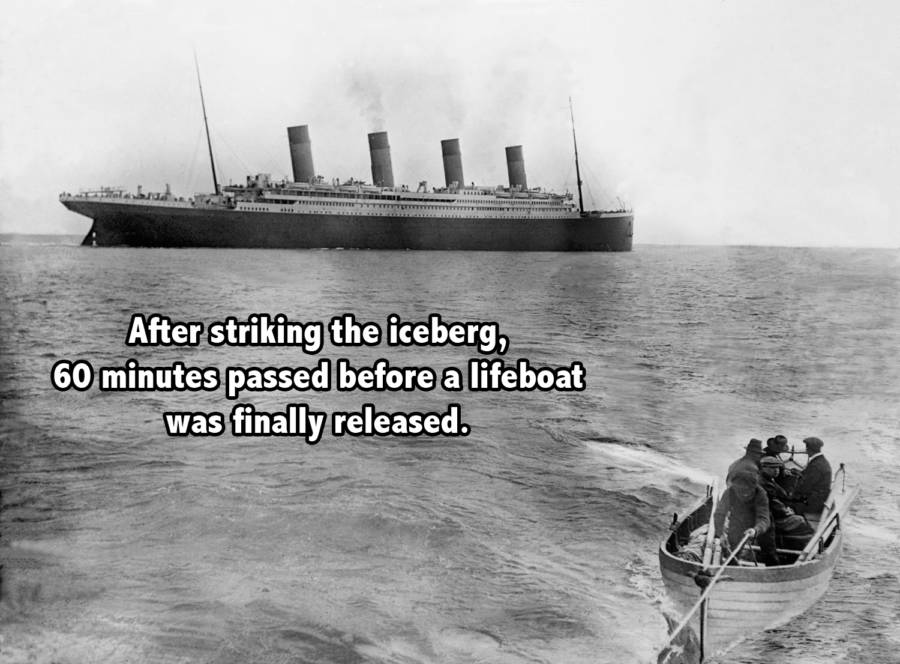 After striking the iceberg, 60 minutes passed before a lifeboat was finally released.Father Frank Browne 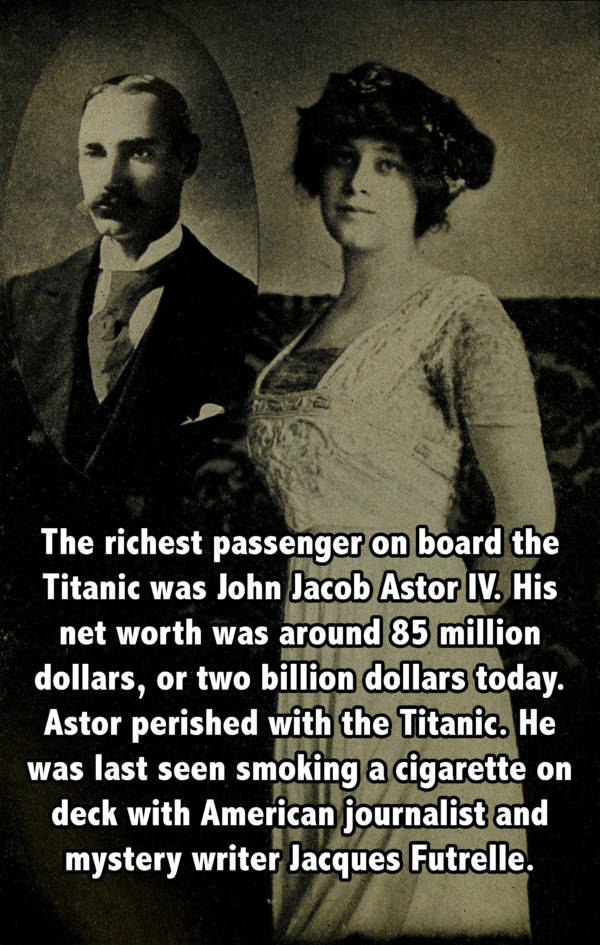 The richest passenger on board the Titanic was John Jacob Astor IV. His net worth was around 85 million dollars, or two billion dollars today. Astor perished with the Titanic. He was last seen smoking a cigarette on deck with American journalist and mystery writer Jacques Futrelle.Wikimedia Commons 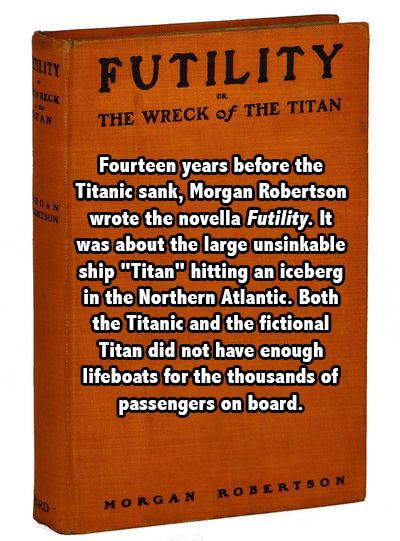 Fourteen years before the Titanic sank, Morgan Robertson wrote the novella Futility. It was about the large unsinkable ship "Titan" hitting an iceberg in the Northern Atlantic. Both the Titanic and the fictional Titan did not have enough lifeboats for the thousands of passengers on board.Wikimedia Commons 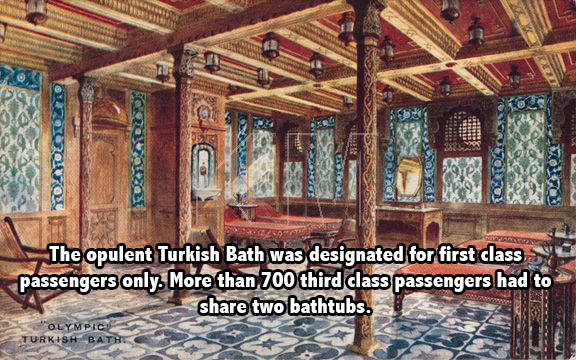 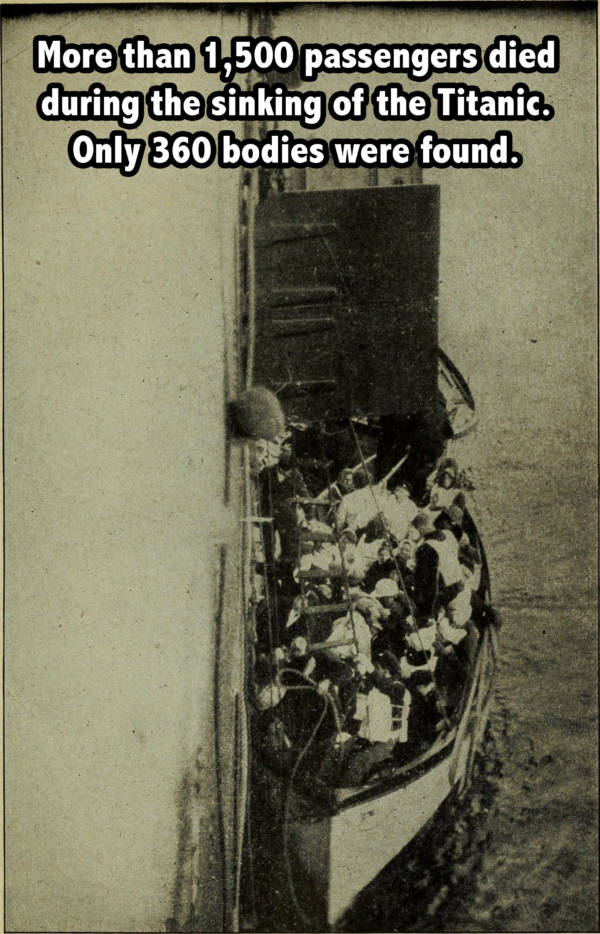 More than 1,500 passengers died during the sinking of the Titanic. Only 360 bodies were found.Wikimedia Commons

The 15 bulkheads on the "unsinkable" Titanic were individually watertight. The fatal flaw? Water could spill from one compartment into the next, the weight of the water pulling the ship down into the ocean. Karl Beutel/Wikimedia Commons

Every engineer aboard the Titanic went down with the ship. They stayed behind to run the power so others could have the chance to escape.Universal Images Group/Getty Images 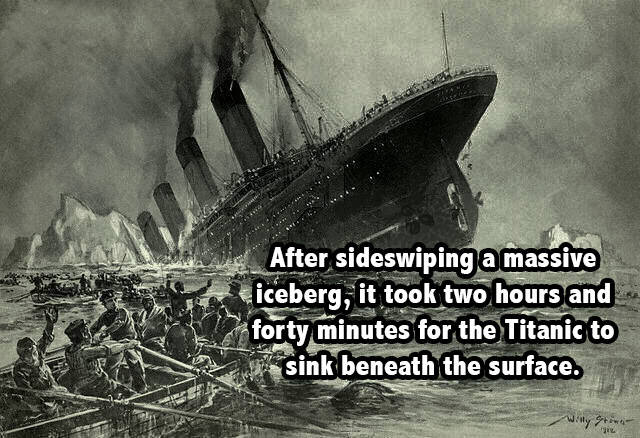 After sideswiping a massive iceberg, it took two hours and forty minutes for the Titanic to sink beneath the surface.Willy Stöwer/Wikimedia Commons 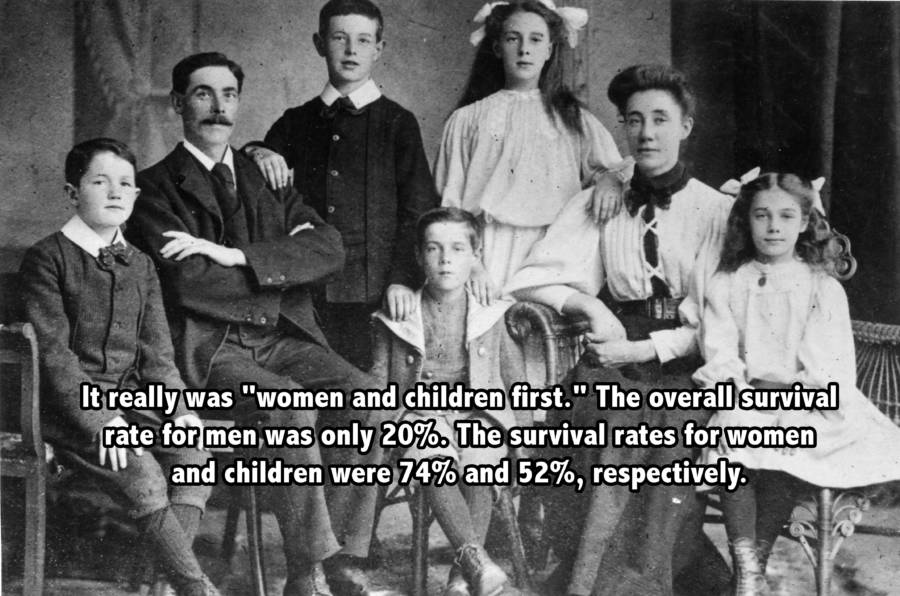 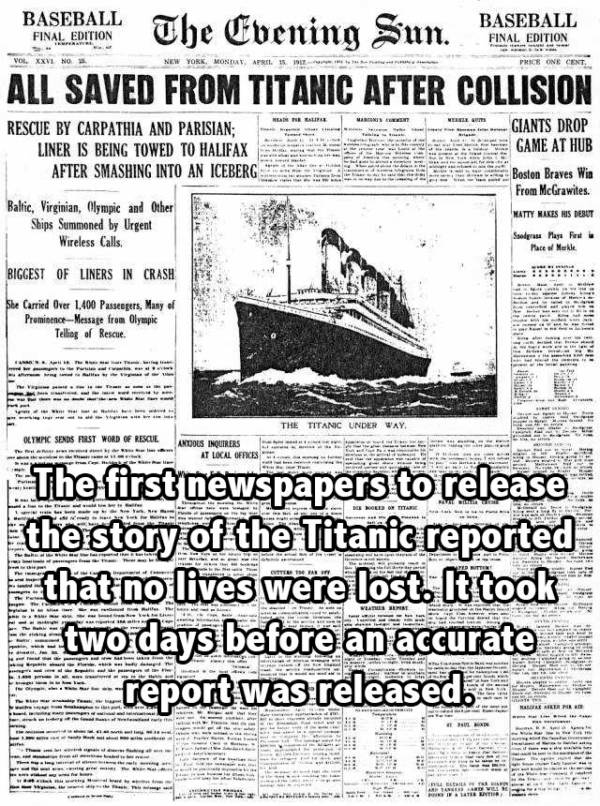 The first newspapers to release the story of the Titanic reported that no lives were lost. It took two days before an accurate report was released.The Evening Star/Wikimedia Commons 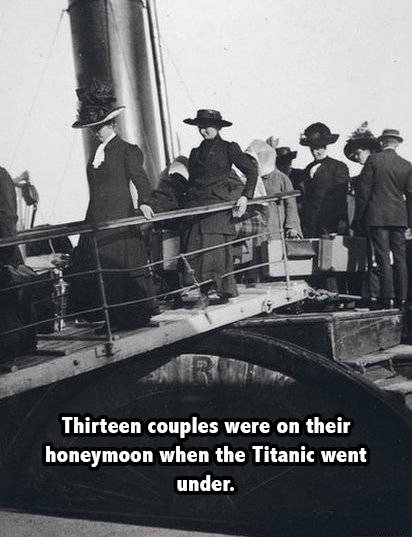 Thirteen couples were on their honeymoon when the Titanic went under.Father Frank Browne 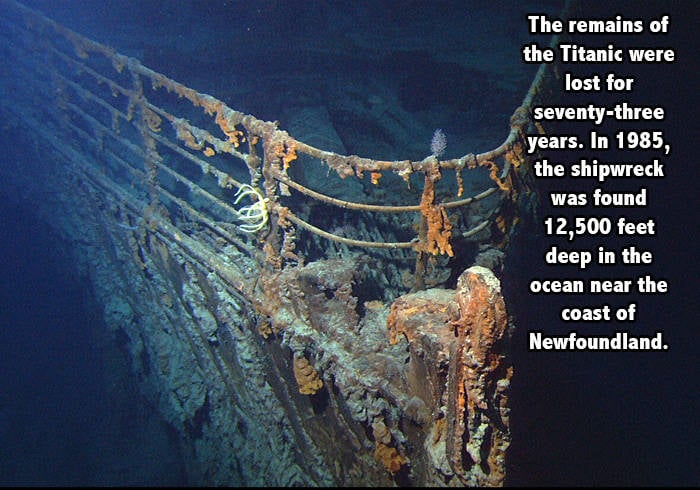 The remains of the Titanic were lost for seventy-three years. In 1985, the shipwreck was found 12,500 feet deep in the ocean near the coast of Newfoundland.NOAA/Wikimedia Commons 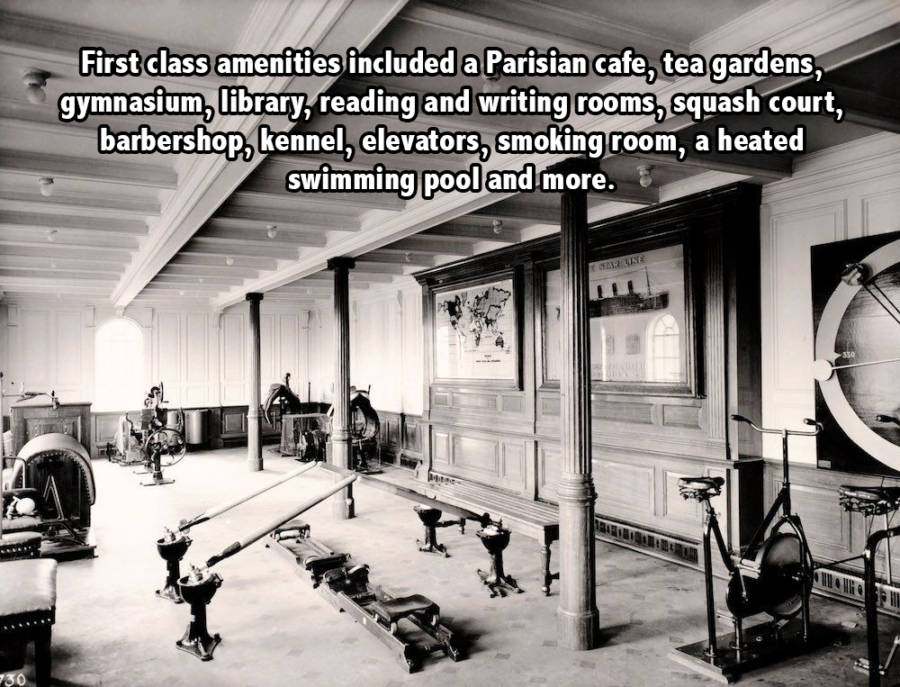 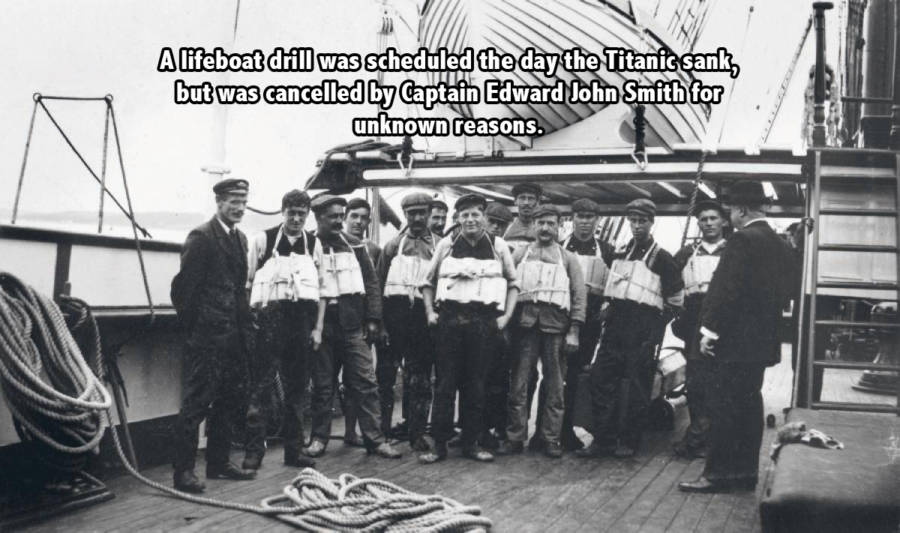 A lifeboat drill was scheduled the day the Titanic sank, but was cancelled by Captain Edward John Smith for unknown reasons.Father Frank Browne

On April 14th, 1912, the Titanic radio operators were warned six times of drifting ice in the North Atlantic.Stephan Rehorek/Wikimedia Commons 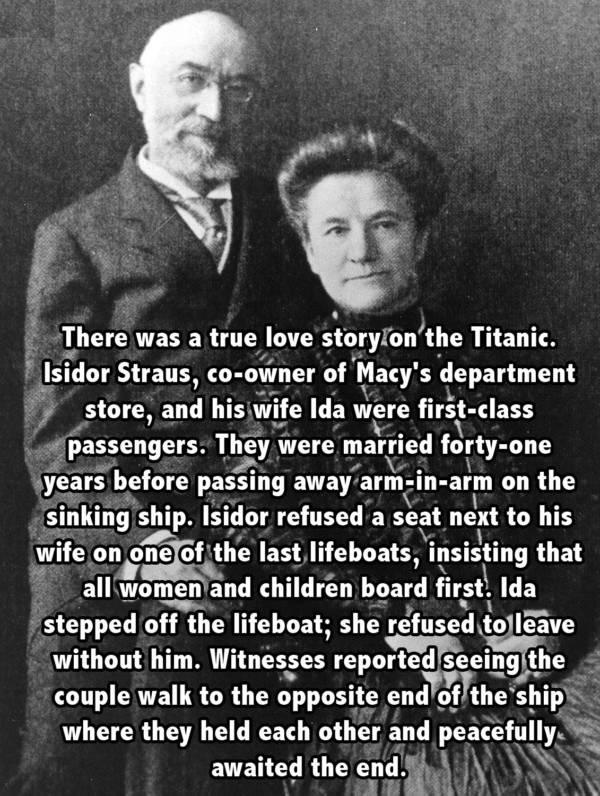 There was a true love story on the Titanic. Isidor Straus, co-owner of Macy's department store, and his wife Ida were first-class passengers. They were married forty-one years before passing away arm-in-arm on the sinking ship. Isidor refused a seat next to his wife on one of the last lifeboats, insisting that all women and children board first. Ida stepped off the lifeboat; she refused to leave without him. Witnesses reported seeing the couple walk to the opposite end of the ship where they held each other and peacefully awaited the end. Wikimedia Commons 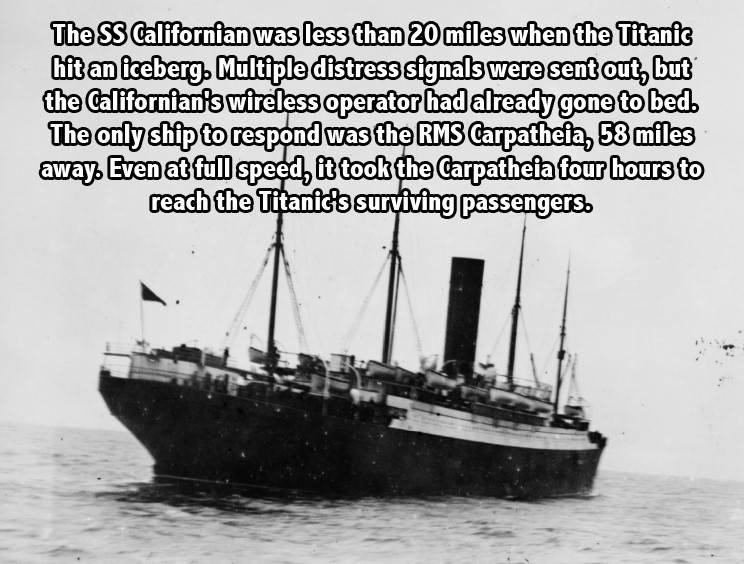 The SS Californian was less than 20 miles when the Titanic hit an iceberg. Multiple distress signals were sent out, but the Californian's wireless operator had already gone to bed. The only ship to respond was the RMS Carpatheia, 58 miles away. Even at full speed, it took the Carpatheia four hours to reach the Titanic's surviving passengers.Wikimedia Commons 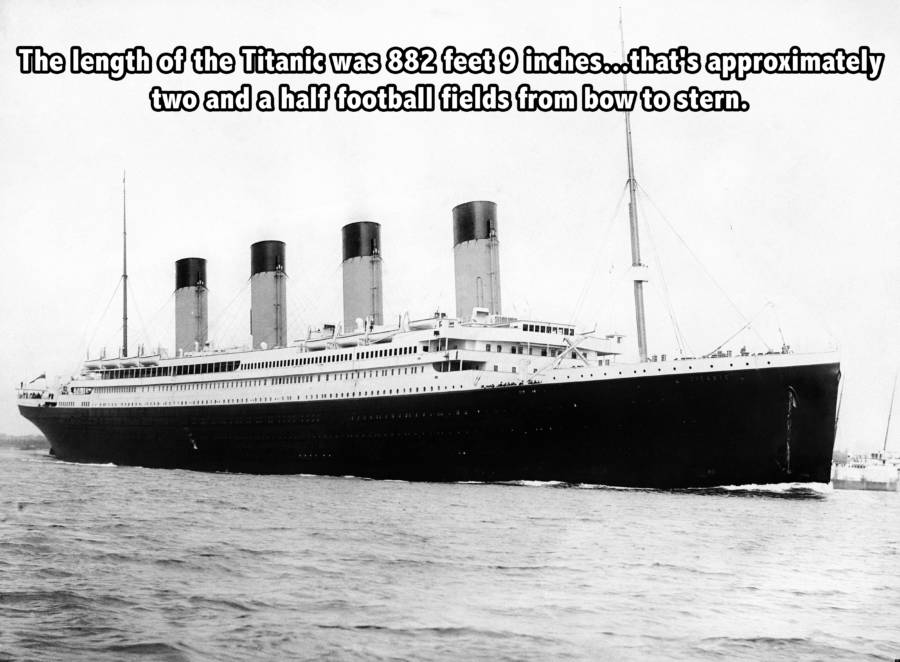 The length of the Titanic was 882 feet 9 inches...that's approximately two and a half football fields from bow to stern.F.G.O. Stuart/Wikimedia Commons 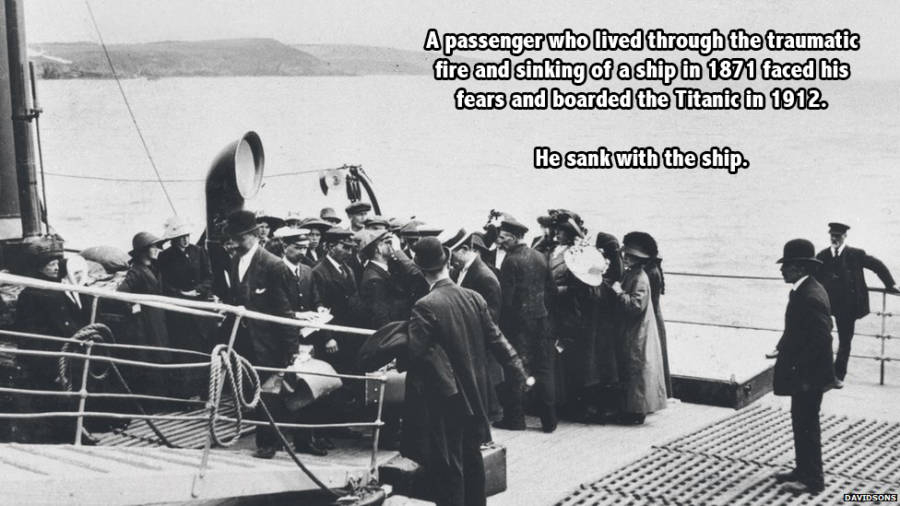 A passenger who lived through the traumatic fire and sinking of a ship in 1871 faced his fears and boarded the Titanic in 1912. He sank with the ship.Father Frank Browne 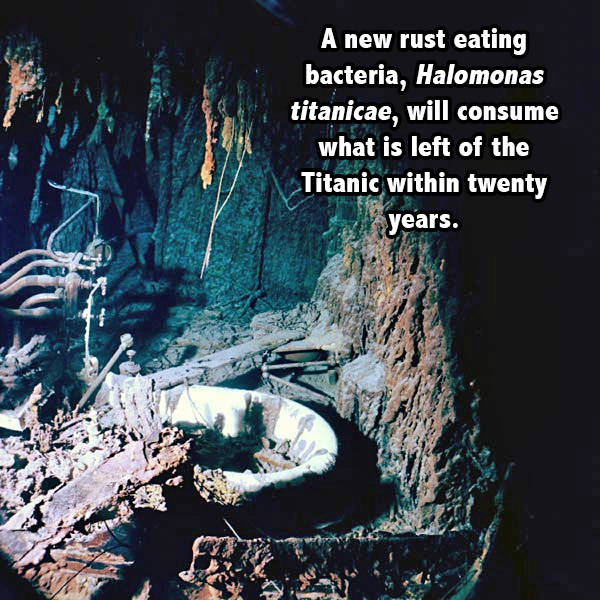 A new rust eating bacteria, Halomonas titanicae, will consume what is left of the Titanic within twenty years.NOAA/Wikimedia Commons 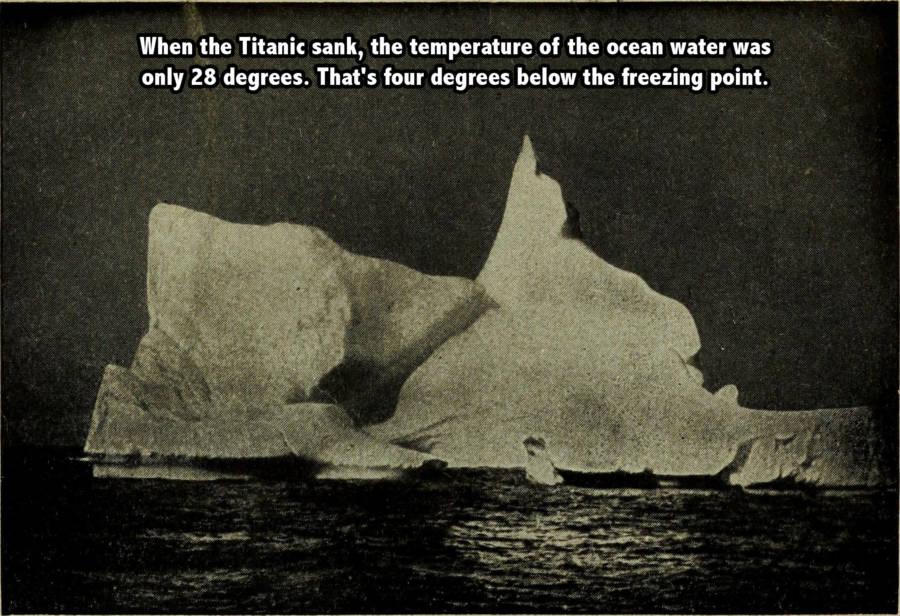 When the Titanic sank, the temperature of the ocean water was only 28 degrees. That's four degrees below the freezing point.Wikimedia Commons

When the Titanic first hit the iceberg, large chunks of ice went flying to the forward deck as carefree passengers tossed the ice around in a spontaneous game of ice football. They were, for the moment, oblivious to the impending disaster.

Five days earlier, on April 10, 1912, the Titanic had left the port of Southampton, England, headed for New York. On April 15, the behemoth struck the iceberg, split in two, and sank deep into the frigid waters of the North Atlantic.

The iceberg was actually spotted one minute before the collision, but First Officer Murdoch waited 30 seconds to give orders. If it weren't for this fatal delay, the Titanic might have avoided the iceberg altogether.

The basic story of the Titanic is a familiar one, but from that game of ice football to the reason a nearby ship didn't come to the rescue to the very reason the Titanic sank (it isn't exactly what you think), these little-known Titanic facts are sure to surprise you--and give you the chills.

After learning this interesting facts about the RMS Titanic, see James Cameron's video explanation of how the Titanic sank and take a look at some stunningly beautiful icebergs (that have never sunk a ship) from around the world. Then, go beyond the Titanic to discover five sunken ships with even more fascinating stories.