These Harry Houdini facts reveal that this master illusionist's life was even more exciting and mysterious than you imagined. 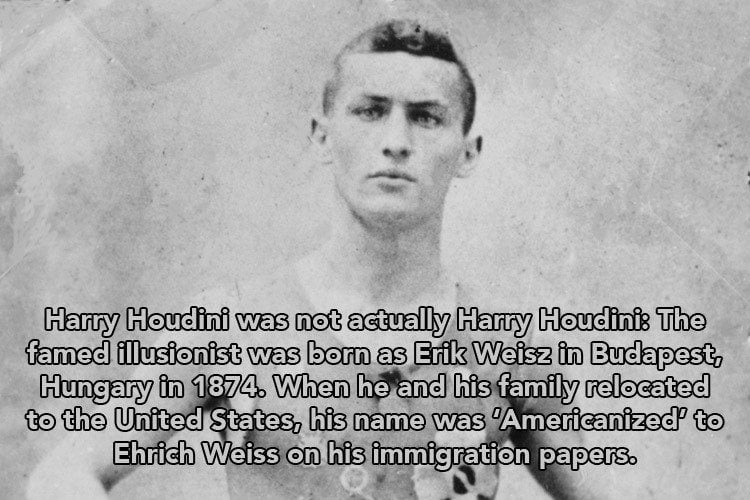 Harry Houdini was not actually Harry Houdini: The famed illusionist was born as Erik Weisz in Budapest, Hungary in 1874. When he and his family relocated to the United States, his name was 'Americanized' to Ehrich Weiss on his immigration papers.Wikimedia Commons 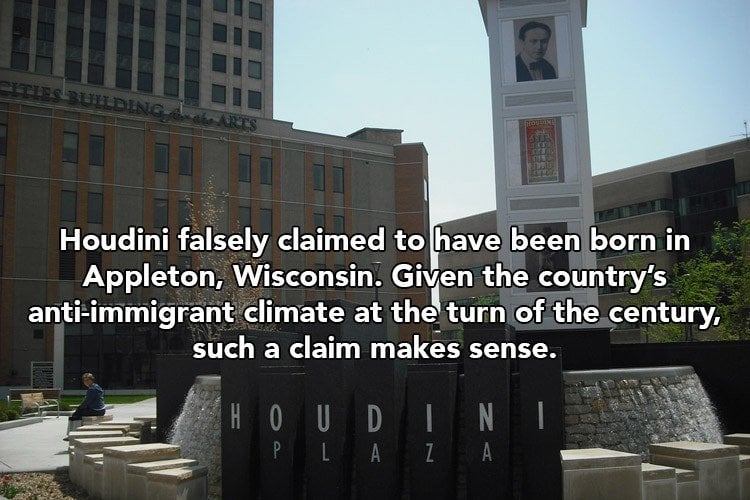 Houdini falsely claimed to have been born in Appleton, Wisconsin. Given the country's anti-immigrant climate at the turn of the century, such a claim makes sense.Flickr 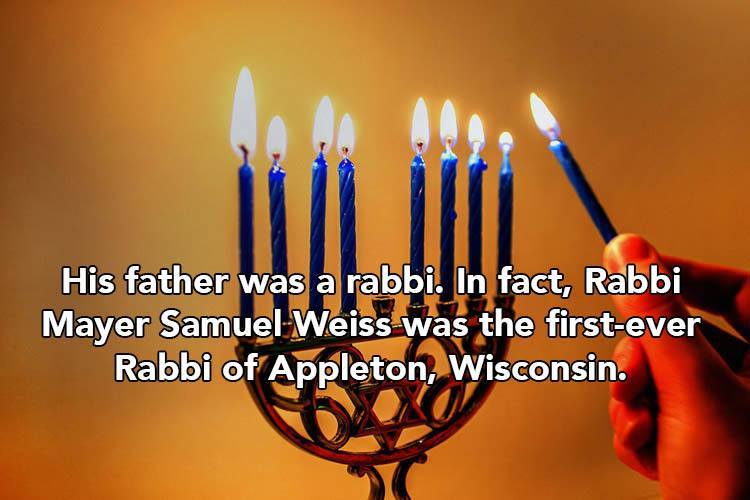 His father was a rabbi. In fact, Rabbi Mayer Samuel Weiss was the first-ever Rabbi of Appleton, Wisconsin.Flickr 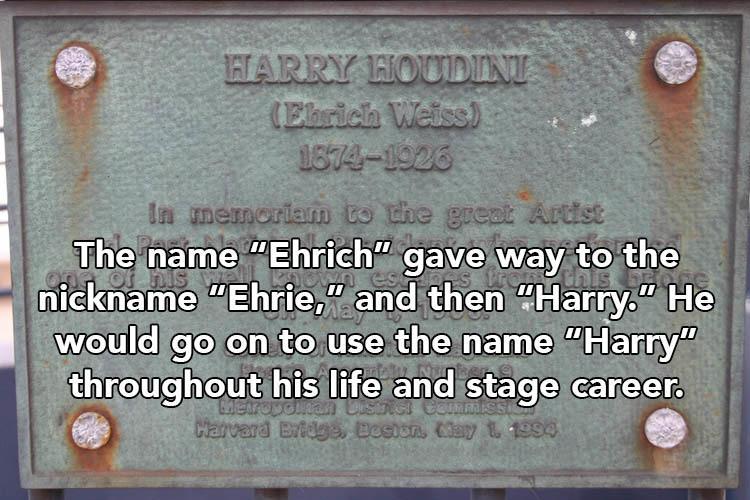 The name "Ehrich" gave way to the nickname "Ehrie," and then "Harry." He would go on to use the name "Harry" throughout his life and stage career.Flickr 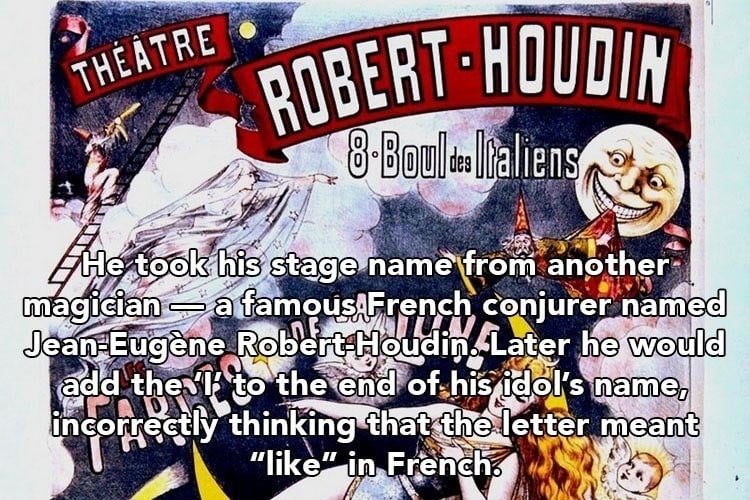 He took his stage name from another magician — a famous French conjurer named Jean-Eugène Robert-Houdin. Later he would add the 'I' to the end of his idol's name, incorrectly thinking that the letter meant "like" in French.Flickr 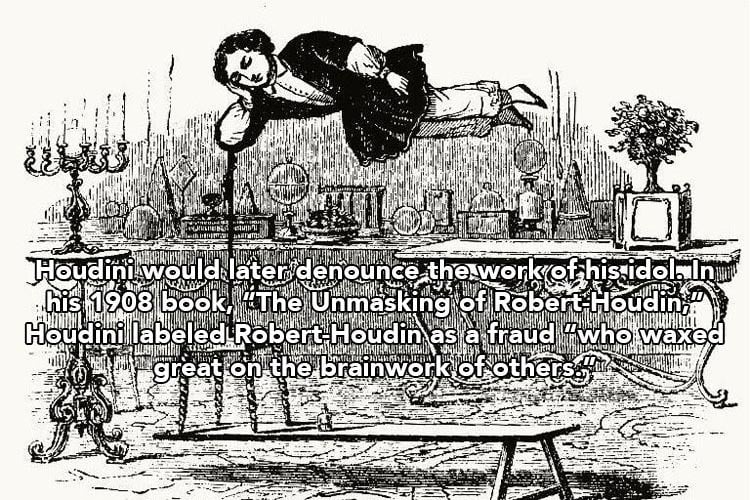 Houdini would later denounce the work of his idol. In his 1908 book, "The Unmasking of Robert-Houdin," Houdini labeled Robert-Houdin as a fraud "who waxed great on the brainwork of others."Wikimedia Commons 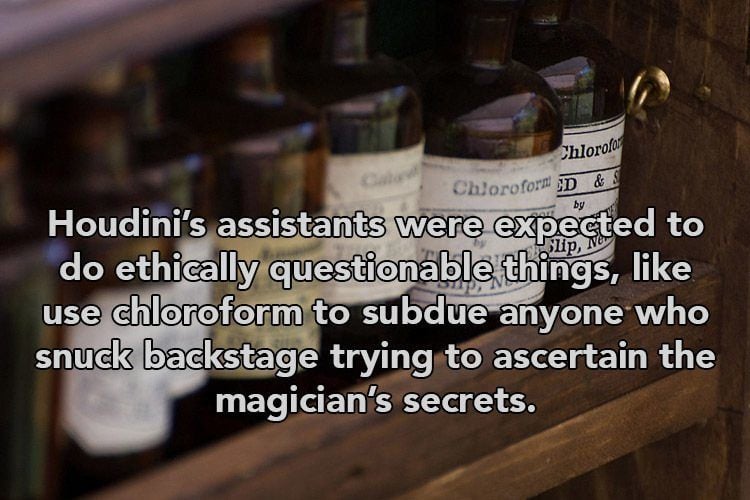 Houdini's assistants were expected to do ethically questionable things, like use chloroform to subdue anyone who snuck backstage trying to ascertain the magician's secrets.Wikimedia Commons 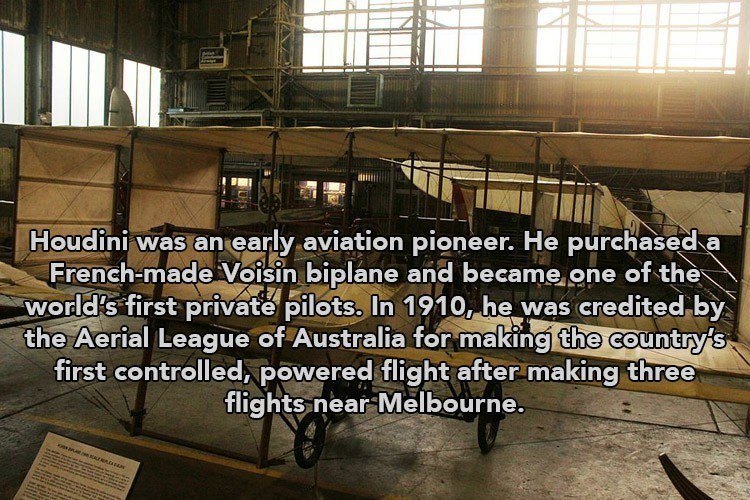 Houdini was an early aviation pioneer. He purchased a French-made Voisin biplane and became one of the world's first private pilots. In 1910, he was credited by the Aerial League of Australia for making the country's first controlled, powered flight after making three flights near Melbourne.Wikimedia Commons 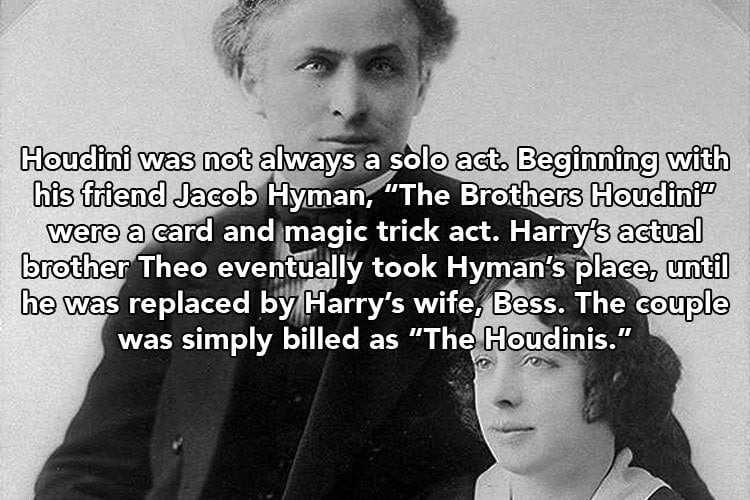 Houdini was not always a solo act. Beginning with his friend Jacob Hyman, "The Brothers Houdini" were a card and magic trick act. Harry's actual brother Theo eventually took Hyman's place, until he was replaced by Harry's wife, Bess. The couples was simply billed as "The Houdinis."Wikimedia Commons 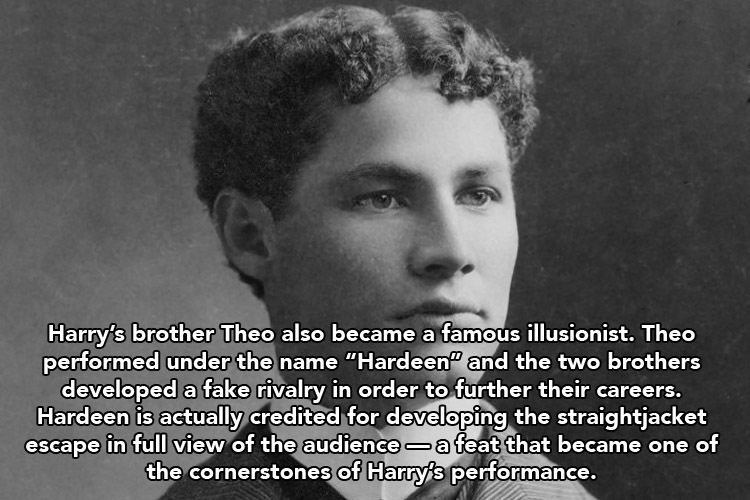 Harry's brother Theo also became a famous illusionist. Theo performed under the name "Hardeen" and the two brothers developed a fake rivalry in order to further their careers. Hardeen is actually credited for developing the straightjacket escape in full view of the audience — a feat that became one of the cornerstones of Harry's performance.Wikimedia Commons 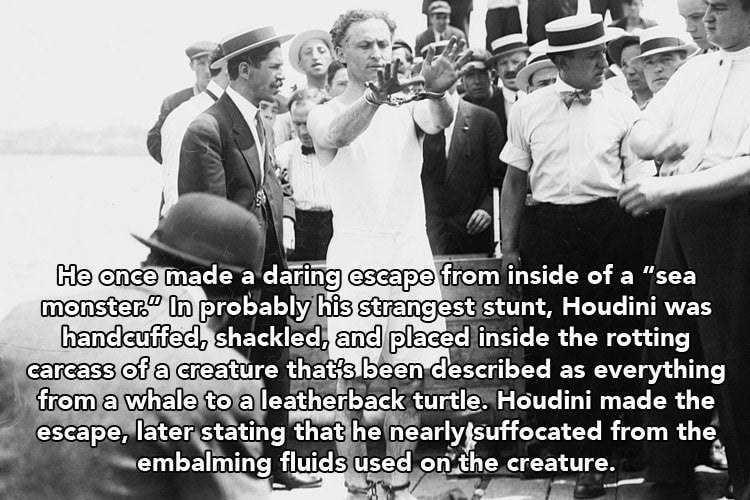 He once made a daring escape from inside of a "sea monster." In probably his strangest stunt, Houdini was handcuffed, shackled, and placed inside the rotting carcass of a creature that's been described as everything from a whale to a leatherback turtle. Houdini made the escape, later stating that he nearly suffocated from the embalming fluids used on the creature.Wikimedia Commons 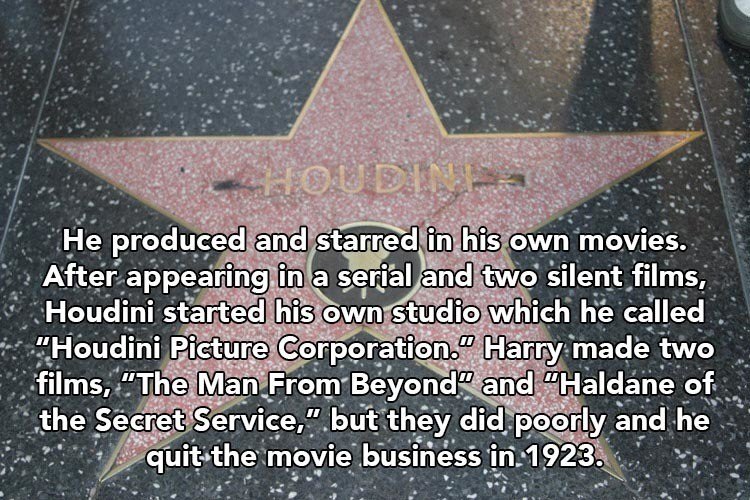 He produced and starred in his own movies. After appearing in a serial and two silent films, Houdini started his own studio which he called "Houdini Picture Corporation." Harry made two films, "The Man From Beyond" and "Haldane of the Secret Service," but they did poorly and he quit the movie business in 1923.Flickr 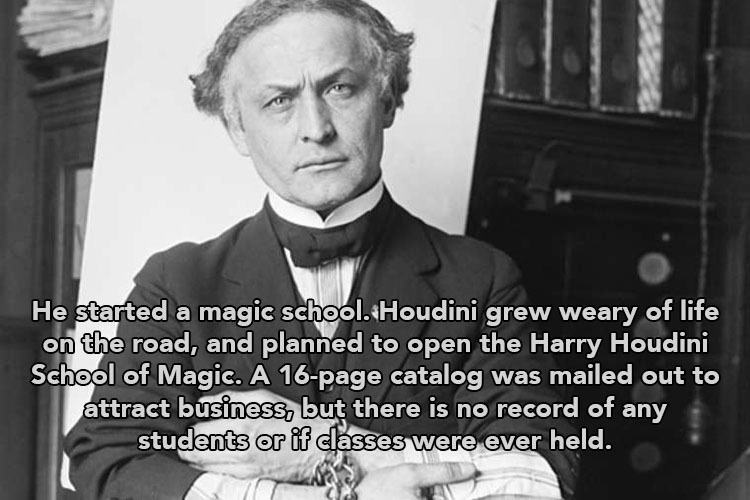 He started a magic school. Houdini grew weary of life on the road, and planned to open the Harry Houdini School of Magic. A 16-page catalog was mailed out to attract business, but there is no record of any students or if classes were ever held.Wikimedia Commons 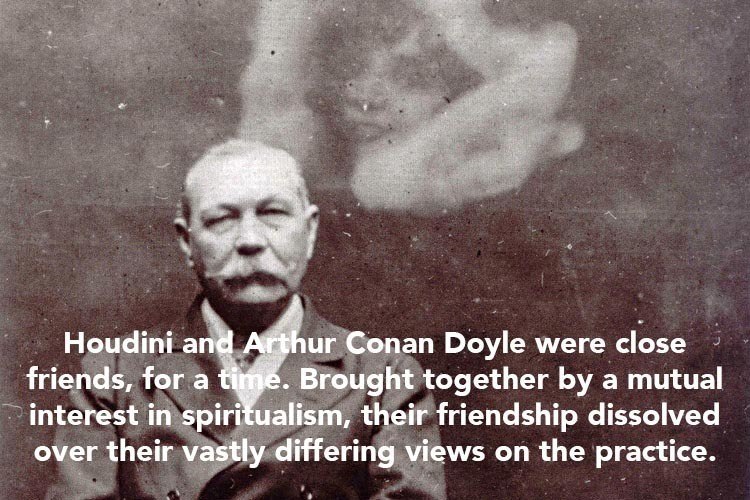 Houdini and Arthur Conan Doyle were close friends, for a time. Brought together by a mutual interest in spiritualism, their friendship dissolved over their vastly differing views on the practice.Flickr 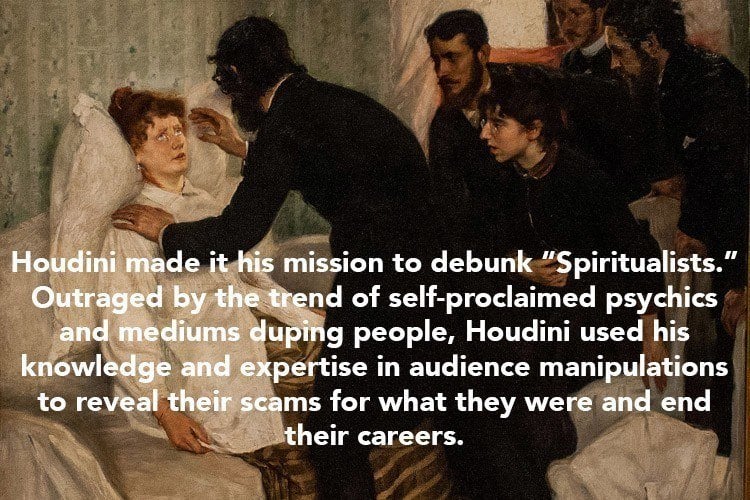 Houdini made it his mission to debunk "Spiritualists." Outraged by the trend of self-proclaimed psychics and mediums duping people, Houdini used his knowledge and expertise in audience manipulations to reveal their scams for what they were and end their careers.Wikimedia Commons 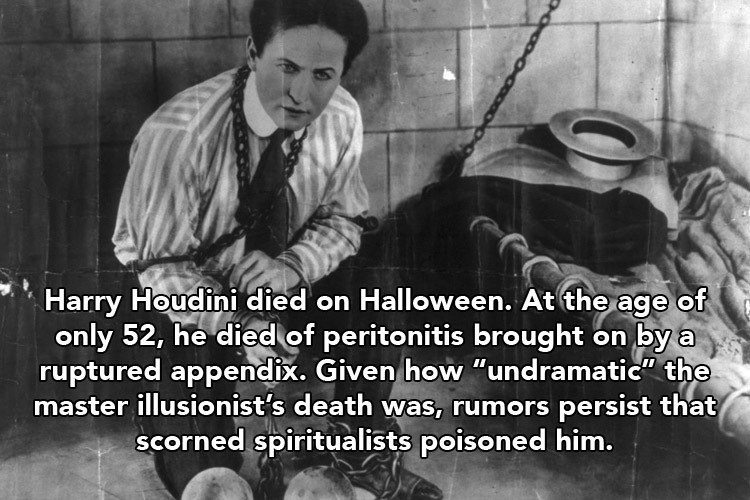 Harry Houdini died on Halloween. At the age of 52, he died of peritonitis brought on by a ruptured appendix. Given how "undramatic" the master illusionist's death was, rumors persist that scorned spiritualists poisoned him.Wikimedia Commons 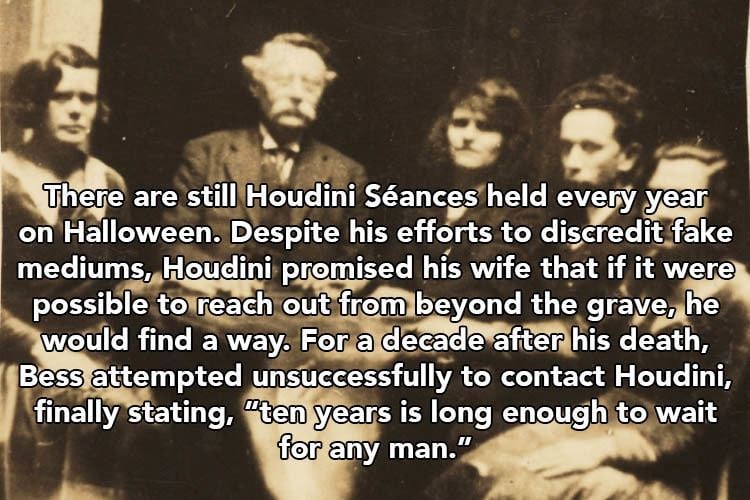 There are still Houdini Séances held every year on Halloween. Despite his efforts to discredit fake mediums, Houdini promised his wife that if it were possible to reach out from beyond the grave, he would find a way. For a decade after his death, Bess attempted unsuccessfully to contact Houdini, finally stating, "ten years is long enough to wait for any man."Flickr 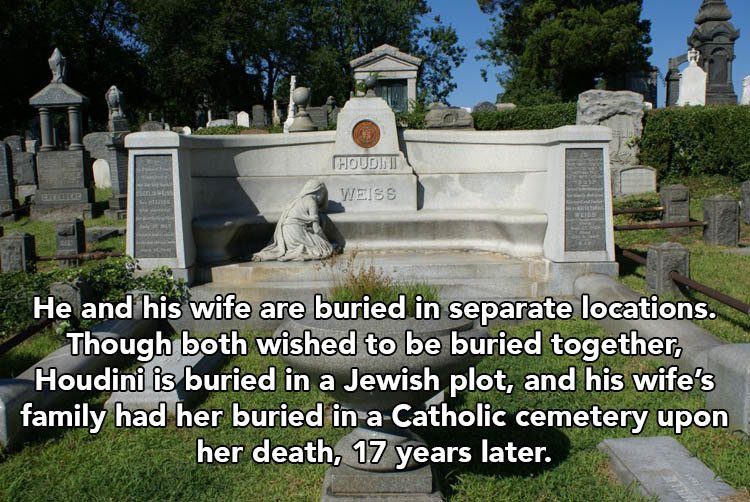 He and his wife are buried in separate locations. Though both wished to be buried together, Houdini is buried in a Jewish plot, and his wife's family had her buried in a Catholic cemetery upon her death, 17 years later.Wikimedia Commons 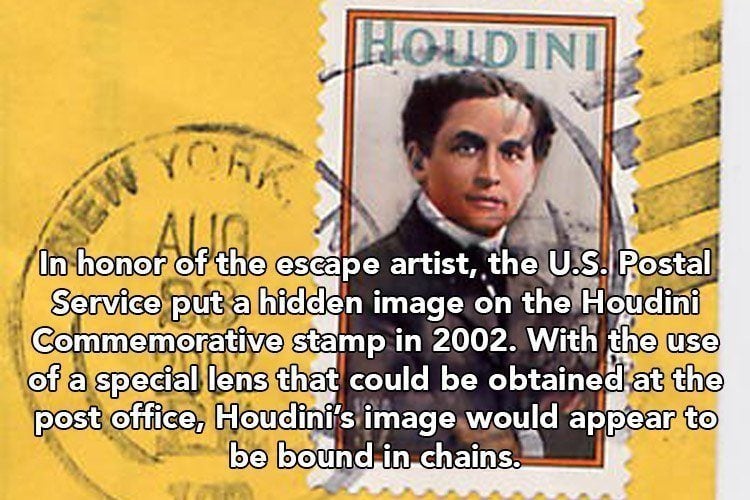 In honor of the escape artist, the U.S. Postal Service put a hidden image on the Houdini Commemorative stamp in 2002. With the use of a special lens that could be obtained at the post office, Houdini's image would appear to be bound in chains.Flickr

Nearly a century after his death, the name Harry Houdini still conjures images of mystery and intrigue. Tens of thousands would gather to watch the grand illusionist escape from straitjackets while suspended from cranes, escape from sealed cans filled with water, and escape from the earth itself after being buried alive. But while many knew his work, did any of us know the man?

The astounding Harry Houdini facts and photos above prove that his life was even more mysterious and intriguing than you ever imagined.

Enjoy these Harry Houdini facts? Next, check out what you may not have known about Sherlock Holmes creator Sir Arthur Conan Doyle, plus these incredible PT Barnum facts and optical illusions that'll fool you every time.