Why Your Eyes Are Fooled By The Famous Checker Shadow Illusion

You've likely been fooled, astounded, and enraged by the infamous checker shadow illusion. Here's why it gets you every time. 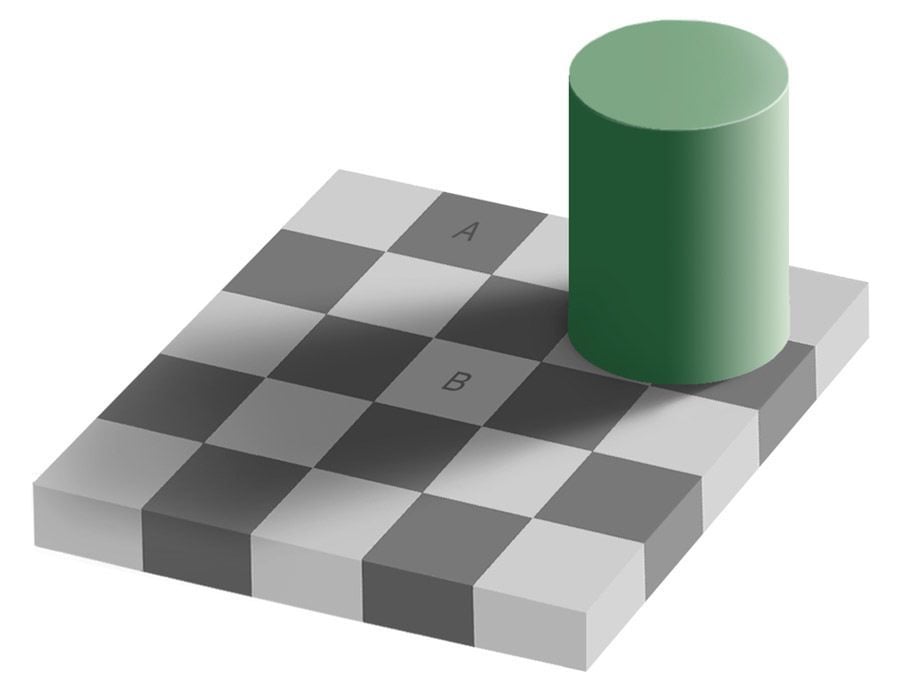 Squares “A” and “B” are actually the same exact color. Image Source: Wikimedia Commons

Squares “A” and “B” in the photo above are the exact same color. Yet, if you still trust your eyes more than those words, there are a few simple tests and scientific principles that will help you realize that your eyes are lying to you.

This optical illusion, known as the checker shadow illusion, is related to the infamous Cornsweet illusion, named after psychologist Tom Cornsweet in the 1960s. These illusions work because of the way the brain understands contrast and shadows. The human brain uses relative color and shading to determine the color of objects in an image (and in the real world).

In the above checker shadow illusion, the brain perceives that the image is lit from a light source coming from the right. That light source casts a shadow on the checkerboard, supposedly making all of the squares that lie in the shadow’s path darker, but not so dark that the lighter and darker squares inside and outside of the shadow are indistinguishable.

Square A appears to still be darker than square B. But it’s not.

“In the Cornsweet effect, opposing luminance gradients that meet at an edge make physically identical adjoining regions look differently bright,” according to American Scientist, the magazine of The Scientific Research Society. “Specifically, the region adjacent to the lighter gradient appears brighter than the region next to the darker gradient.”

Judging the color of objects based on the contrasts in the objects’ environment doesn’t work. To test for yourself, pull up Photoshop or another photo editing software that has the capability to pull colors from an image. You will find that both squares have the same exact color profile.

Or, if you still trust your eyes, just watch the video below:

After learning about the checker shadow illusion, check out 17 more optical illusions that will blow your mind. Then, take a look at the incredible painted illusions of Felice Varini.