Despite being accepted members of their school community, Harris and Klebold were far from normal in terms of their attitudes towards violence and society.

Cullen found that Harris had thoroughly voiced his bleak perspective on modern society on numerous occasions before the massacre. Harris allegedly found joy in manipulating people, lying to them, and expressed little to no empathy regarding their troubles.

“God I can’t wait till they die. I can taste the blood now…You know what I hate?…MANKIND!!!…kill everything,” Harris wrote in his notebook.

As for Harris’ partner, Cullen wrote, “Klebold is easier to comprehend, a more familiar type. He was hotheaded but depressive and suicidal. He blamed himself for his problems.”

A picture of a calculated killer, Harris, and a troubled young man, Klebold, appeared to be the more likely profile of the shooters to Cullen than victims-turned-aggressors.

Kass also got a hold of Klebold’s college application essay through a Freedom of Information Act request and found that the young killer was somewhat self-aware and made active attempts to make sense of himself and his life. Klebold acknowledged in the essay that he had made mistakes and had become part of a bad crowd during his sophomore and junior years. But that he completed a college application at all strongly indicated to Kass that Klebold at least considered living out a future.

Nonetheless, both Harris and Klebold gave their parents and local authorities a hefty supply of warning signs — which went largely unreported.

In 1998, Harris and Klebold were arrested for breaking into a Jefferson County vehicle and placed into a juvenile diversion program by authorities. Meanwhile, Klebold recorded depressing and alarming notes in a personal day planner. He wrote unrequited love letters, and described feeling alone and wanting to die. In November 1997, Klebold wrote that he wanted someone to buy him a gun so that he could kill himself with it. 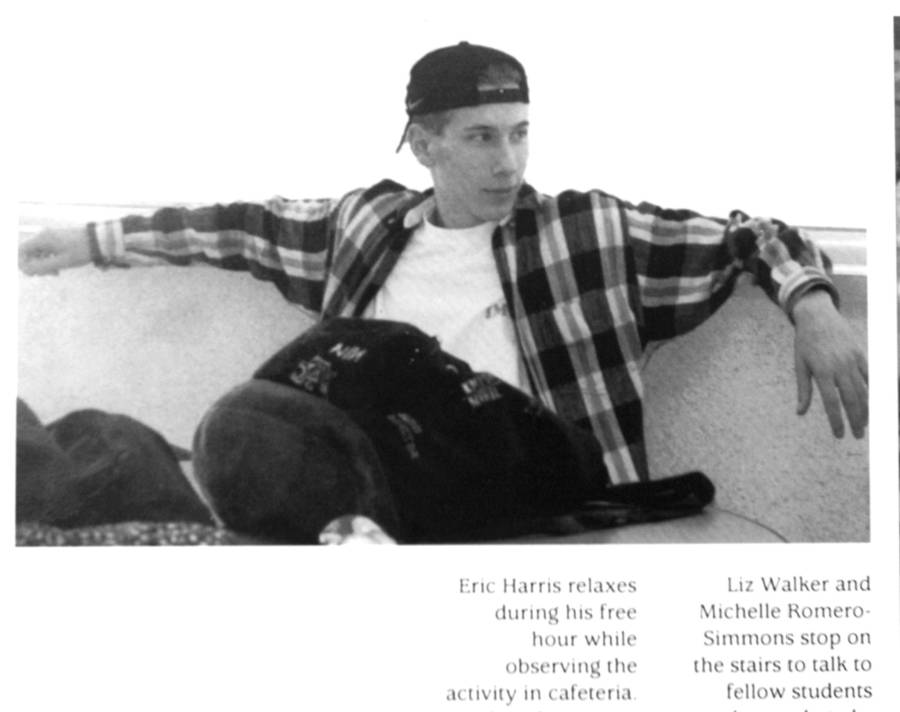 Photo by Rick Maiman/Sygma via Getty ImagesEric Harris in the Columbine yearbook. 1998-1999.

Klebold and Harris were busy making pipe bombs and quietly amassing a sizable arsenal of weapons which Harris recorded on his personal website. In 1998, junior Brooks Brown discovered his name on that very website and that Harris had threatened to murder him.

“When I first saw the Web pages, I was utterly blown away,” said Brown. “He’s not saying that he’s gonna beat me up, he’s saying he wants to blow me up and he’s talking about how he’s making the pipe bombs to do it with.”

When parents Randy and Judy Brown visited the Jefferson County Sheriff’s Office to alert them of this, they were told Harris already had a well-documented criminal file. Both Harris and Klebold were still on probation at this time for having broken into a car and for theft. 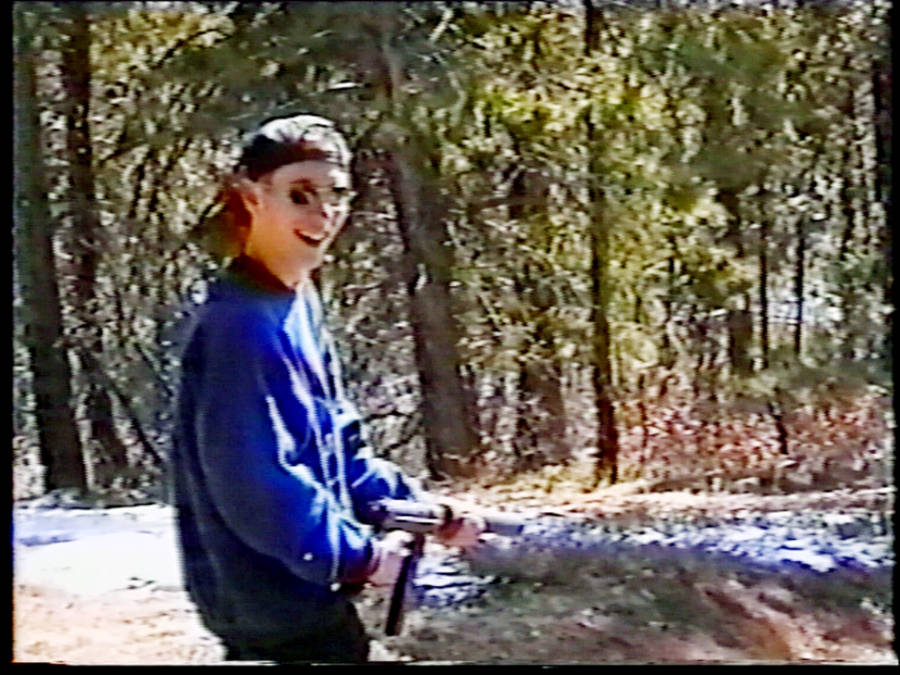 “I was utterly dumbfounded that they did nothing with the Web pages,” said Brooks Brown. “Eric was saying how he was gonna blow people up. ‘Hey, I’m making pipe bombs. I’ve got the designs for them on my Web site. I’m gonna kill these people. Here’s why.’ That’s a level beyond making a joke.”

A document obtained by CBS confirmed that investigators “met with Mrs. Judy Brown” and subsequently tried to get a warrant to search Harris’ home but they failed to do so. Oddly, a sheriff’s deputy reportedly found “a pipe bomb…consistent with the devices” Harris described on his website without having searched the young killer’s home.

Fellow Columbine student Nate Dykeman said that Harris and Klebold had shown off their weapons and bragged about them months before the shooting. Meanwhile, Devon Adams, a sophomore in 1998, also found herself mentioned on Harris’ website as an intended target.

Klebold even handed in an assignment that was so violent that his teacher later called it “the most vicious story she’d ever read.”

“The man unloaded one of the pistols across the fronts of four innocents…The…streetlights caused a visible reflection off of the droplets of blood…I understood his actions.”

By then, Klebold and Harris had added two sawed-off shotguns, a semiautomatic pistol, and a rifle to their stockpile.

What’s more, Joe Schallmoser and Howard Cornell, who were in charge of drafting a new set of security guidelines for the district following the shootings at Paducah, Kentucky and Jonesboro, Arkansas, reported that Columbine High school rejected implementing the safeguards just eight months before the attack. 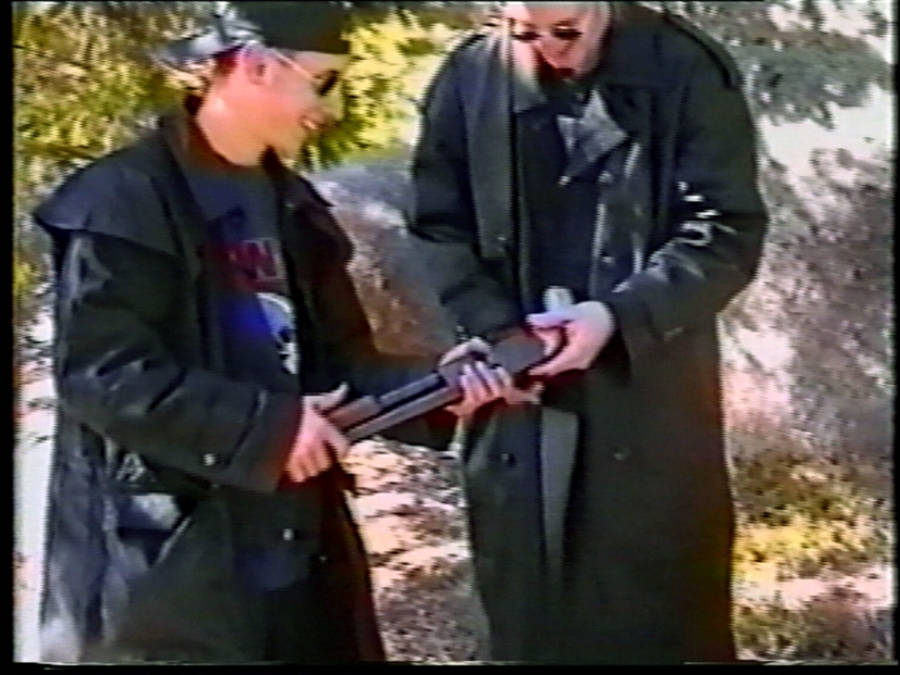 The guidelines would’ve required that the school notify parents and law enforcement about “a threat by any student” to “commit any act of violence.” Even though Columbine said they’d already discovered a potential threat — Harris — they added they didn’t need any assistance and thus did not take preemptive action against the young killer.