During World War I, Russia constructed the Tsar Tank, a vehicle unlike anything the world had ever seen. But this tricycle-like behemoth had one little problem. 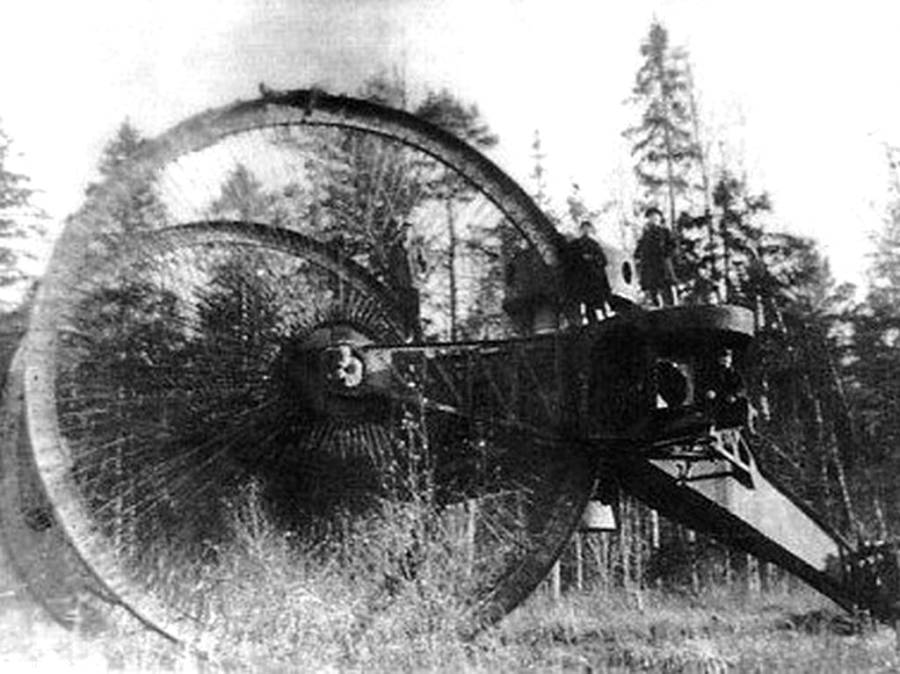 From 1914 to 1918, the killing fields of Europe were a place of bloody stalemate. The Great War – World War I as we call it today – resulted in massive casualties on a frightening scale as belligerent empires became bogged down in trench warfare with tens of thousands of lives sacrificed for mere yards of territory.

To break the deadlock, military innovators turned to the drawing board. Several countries simultaneously came up with the concept of the tank – as in water tank, coined by the British to disguise the real purpose of the armored vehicle they were developing.

Most World War I tanks followed a similar design: a motorized protective barrier with treads to plow over obstacles and rough terrain while providing shielding for troops. Some early versions included machine guns and cannons to add offensive capabilities to strike at enemy positions.

All kinds of designs and features were considered. Perhaps the most unusual prototype to emerge from the new era of military technology was the Russian Tsar Tank.

Also known as the Netopyr, this behemoth was the brainchild of Nikolay Lebedenko, a Russian military engineer who worked on the original design with Nikolai Zhukovsky, Boris Stechkin, and Alexander Mikulin.

The Tsar Tank was gigantic even by modern standards. It was nearly 60 feet long and almost 30 feet wide. It featured a large armored T-shaped carriage with a main top turret bristling with machine guns. Lower sponsons were also equipped machine guns for covering fire. A crew of 10 operated the vehicle.

Each large wheel was powered by a 250-horsepower engine that was adapted from motors captured from a destroyed German Zeppelin. On firm ground, the Tsar Tank reached a top speed of 11 miles an hour. At the rear, a small metal rotor provided balance, giving the military vehicle the appearance of a tricycle on steroids.

The Tsar Tank got its name from Nicholas II, the ruler of Russia. He took a keen interest in the project after Lebedenko showed the Tsar a small working version in 1915. They played with it on the floor, setting up obstacles of books and other barriers, which the miniature model easily overcame.

Nicholas was impressed with the idea and gave Lebedenko a reported 250,000 rubles (about $125,000, an enormous sum at the time). Construction then began under incredible secrecy. All parts for the Tsar Tank were produced as if they were intended for use in battleships or heavy industrial machines so that no one would know the truth about the project.

On Aug. 27, 1915, the Tsar Tank was put through its first field test. It moved along a corduroy road – a path lined with logs – across a swamp. It crushed a tree and then moved off the roadway into the wetland. And that’s where it stopped.

The wheels spun and could not dislodge the Tsar Tank from the muck. The weight was too far to the back, causing the rear rotor to easily sink. Even with large engines, the two large wheels did not have enough power to pull the tank out of the bog.

The project was thus abandoned and the vehicle sat in the swamp until 1923, when it was salvaged for scrap.

Military historians have since debated whether or not the Tsar Tank would have been effective on the battlefield if properly designed. Its sheer size certainly would have intimidated enemy soldiers, especially at a time when tanks were still relatively unknown (imagine a War of the Worlds-style alien craft attacking average military units).

However, the impressive bulk of the Tsar Tank would also have been a detriment, as heavy artillery would have easily damaged or destroyed its front wheels.

Chalk it up to another case of “interesting idea, but maybe we should have thought it out a bit further.”

After this look at the Tsar Tank, check out the craziest Nazi superweapons ever dreamed up. Then, read up on the Landkreuzer P. 1000 Ratte, the biggest tank the Nazi’s came up with.