After delivering the components of the Hiroshima bomb in 1945, the USS Indianapolis was torpedoed by a Japanese submarine, leaving nearly 1,000 men adrift in the middle of the Philippine Sea.

When the USS Indianapolis sank on July 30, 1945, it had just covertly delivered parts of the atomic bomb that would be dropped on Hiroshima. Indeed, the Navy cruiser had a prolific career in the Pacific theater of World War II — until Japanese torpedoes relegated it to the bottom of the ocean in 12 minutes flat.

Due to a slew of miscommunication errors, the USS Indianapolis was left in a harrowing lurch when tragedy struck its starboard side that July night.

What followed instead was the worst wreck in U.S. Naval history, as nearly 1,000 sailors with little hope for rescue were killed in the attack or left adrift for three and a half days under an oppressive sun, floating above hordes of circling sharks. 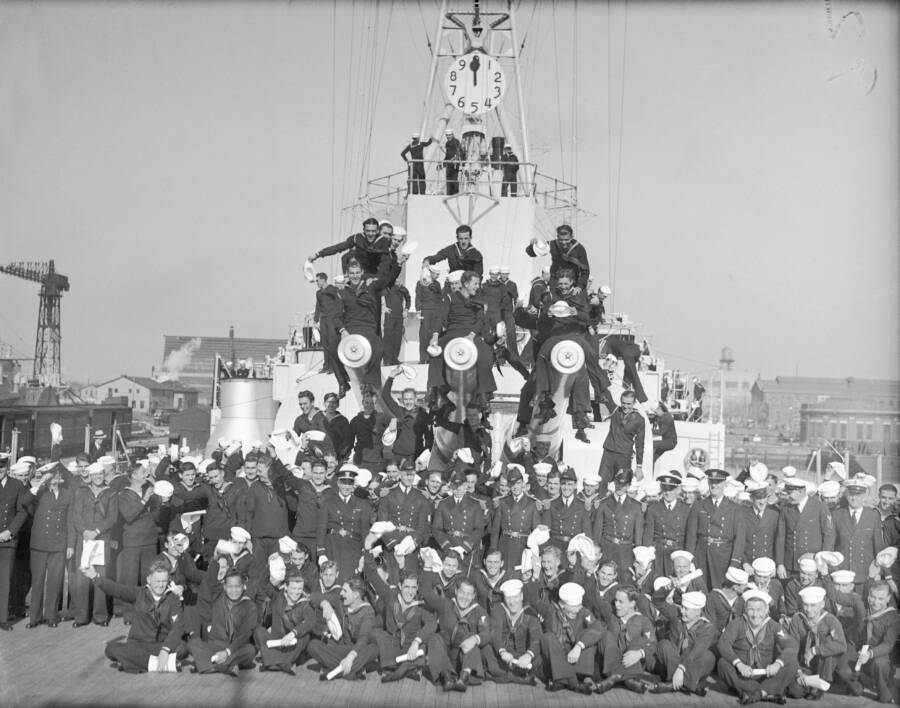 Bettmann/Getty ImagesCrew of the USS Indianapolis pose on board at the Pennsylvania Navy Yard after her commissioning ceremonies. November 15, 1932.

At 610 feet and three inches long, displacing a whopping 9,950 tons of water when placed into the harbor, the USS Indianapolis was launched in 1931 and commissioned by the Navy the following year.

The ship had been constructed in Camden, New Jersey by the U.S. Navy and even though she was originally classified as a light cruiser due to her thin armor, she was reclassified as a heavy cruiser because she was fitted with a collection of eight-inch, 203-millimeter guns.

In addition to a main battery of nine eight-inch guns, the cruiser had eight five-inch anti-aircraft firearms. This massive cruiser required substantial power to run, which included eight boilers and four steam turbines. Her top speed exceeded 32 knots, or about 37 miles per hour. 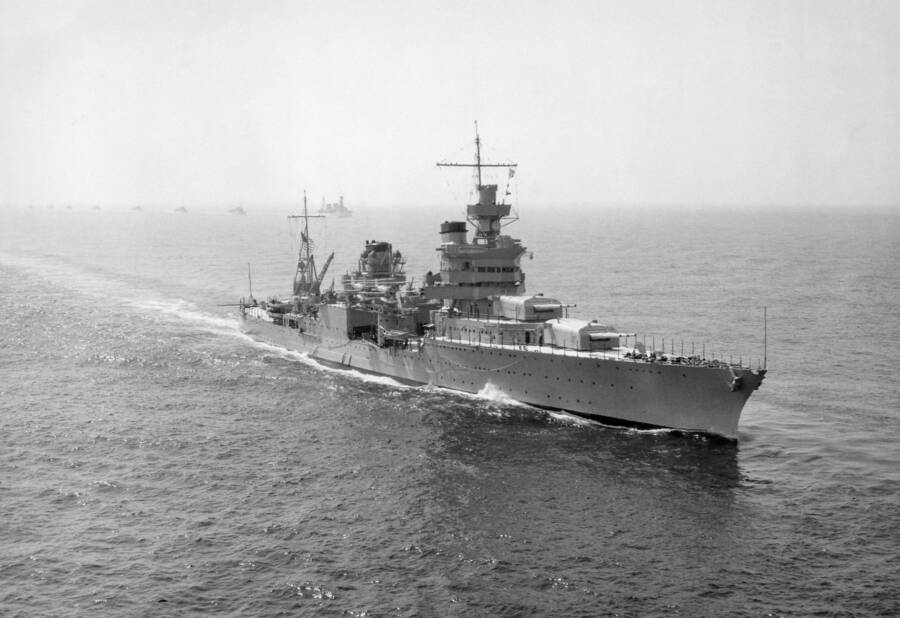 The Indianapolis spent her first few years in the Atlantic and Pacific oceans. She took President Franklin D. Roosevelt on three separate cruises, one of which was his “Good Neighbor” trip to South America in 1936.

With the onset of World War II, however, the Indianapolis set course for the Pacific theater where she saw major action — and one of the most harrowing maritime disasters of the 20th century. 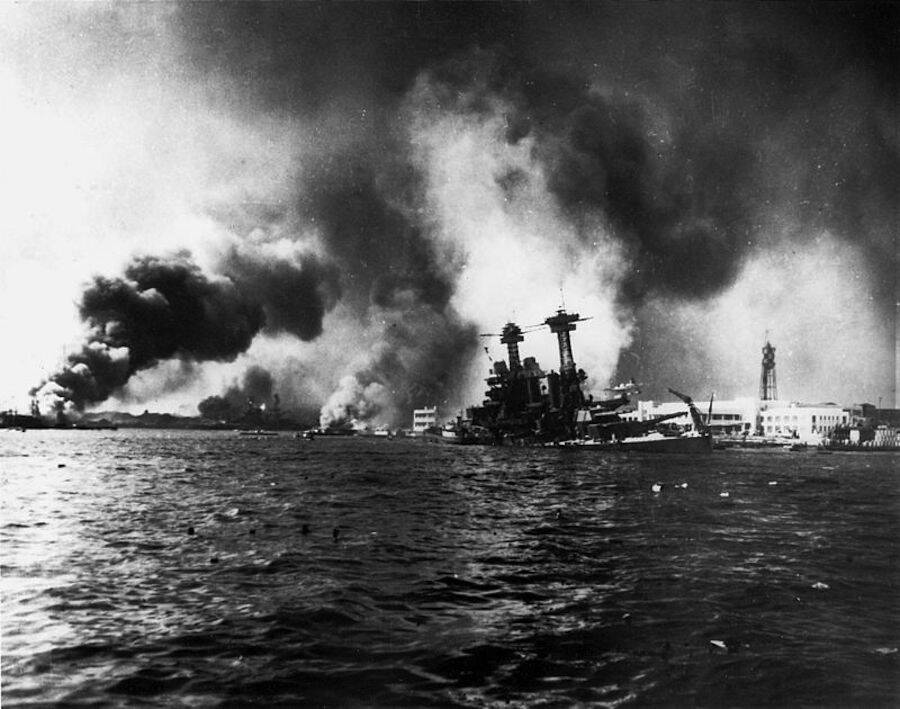 The Indianapolis first saw battle in February 1942 about 350 miles south of Rabaul, New Britain, where she and other American ships downed 16 of 18 twin-engined Japanese bombers. Throughout most of 1943, the vessel largely escorted American convoys and defended them against amphibious assaults. Her sprawling involvement in the war saw her in New Guinea, Saipan, in the 1944 Battle of the Philippine Sea, and even attacks on Tokyo the following year. 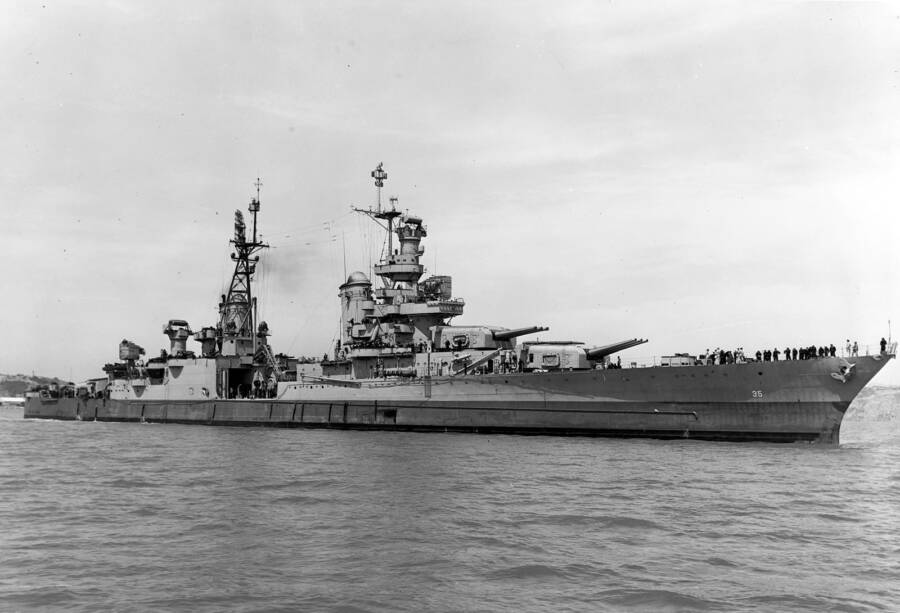 She was also paramount in securing the landings on Iwo Jima and bombarding Okinawa, which was the last island the Allies had to take before reaching mainland Japan. The USS Indianapolis was damaged while in Okinawa and sent back to Hawaii for repairs. Her crew thought their stint in the war at this point was over, but they were called away on one last mission: to deliver components of and nuclear material for the atomic bomb called “Little Boy” that would be dropped on Hiroshima.

The mission was kept top-secret and the crew largely did not know what it was that they were transporting. 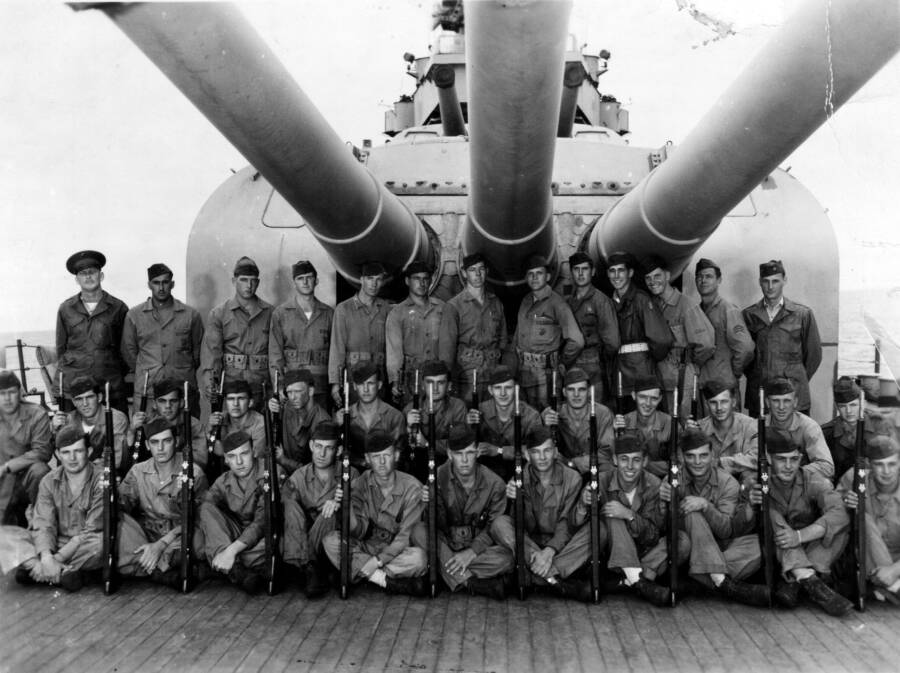 United States NavyA Marine Guard aboard the deck of the USS Indianapolis.

“Rumors started flying all over the place. Wagers were being made and everybody was betting on what that crate contained. They were wagering it was anything from a new type of airplane engine to scented toilet paper for General MacArthur. Needless to say, nobody ever collected a nickel on that bet.” — Clarence Hershberger, Seaman First Class

The vessel raced 5,000 miles from San Francisco to the island of Tinian in 10 days from July 16, 1945, to July 26. It was only three days later that she was blown to bits en route to the Filipino island of Leyte — and 1,195 men were thrown into shark-infested waters.

The Sinking Of The USS Indianapolis

By this point in the war, the Japanese were strained and American forces at sea felt they were close to victory. “Things are very quiet,” one commodore wrote of the Pacific. “The Japanese are on their last legs, and there’s nothing to worry about.”

Nevertheless, at five minutes after midnight on July 30, 1945, the Japanese submarine I-58 shot six torpedoes at the unsuspecting vessel. Two hit. 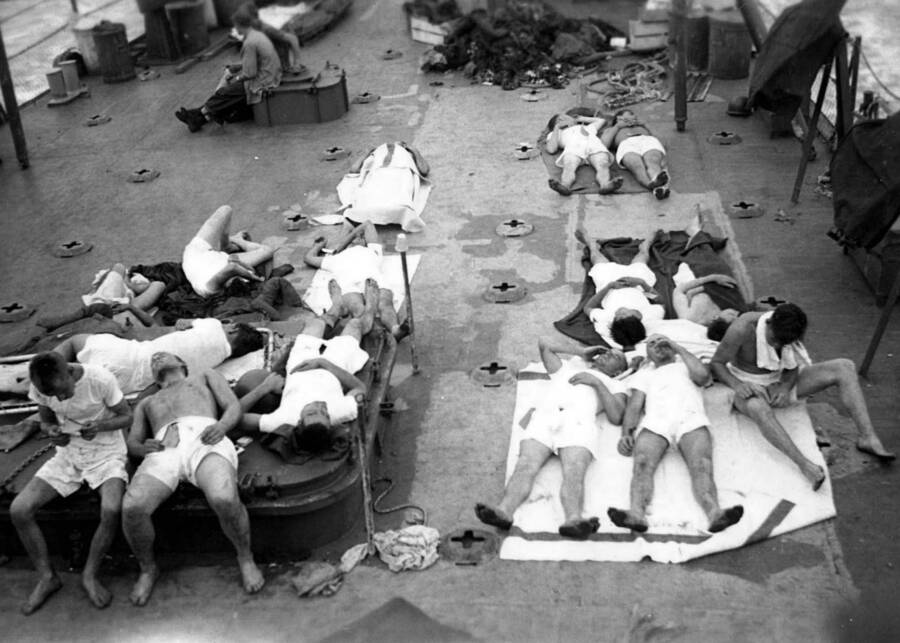 “I was thrown from my emergency cabin bunk on the bridge by a very violent explosion followed shortly thereafter by another explosion… I was sucked off into the water by what I believe was a wave caused by the bow going down rather rapidly… Within a few seconds, I felt hot oil and water brush over the back of my neck and looked around and heard a swish and the ship was gone… We could still see nothing. It was still dark and I could hear people yelling for help.” — Charles B. McVay III

The first torpedo hit the Indianapolis on her back righthand side. The second hit the middle, igniting the fuel tank. Immediately, 300 sailors became trapped in the destroyed ship. Others managed to snag but a few rafts before jumping overboard, while the rest were held afloat by life jackets.

Nine hundred men who survived the initial attack were now left to await rescue in the middle of the Philippine Sea. However, the ship’s three distress signals had been ignored by three separate Naval commanders because one believed it was a trap set by the Japanese, a second had asked not to be bothered, and a third was drunk.

Further, because of communication errors that the Navy later blamed on the secrecy of the mission, the ship was not reported missing when it failed to arrive in Leyte as scheduled the following day.

As a result, it would take close to four days on the open sea for survivors to be sighted by pilots on a routine patrol flight. 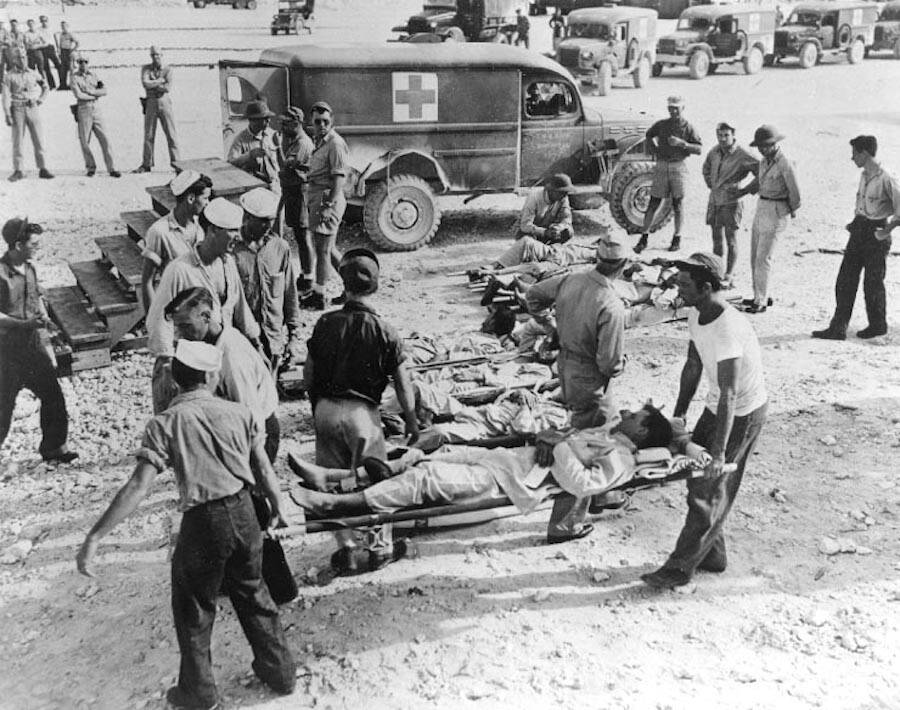 Wikimedia CommonsUSS Indianapolis survivors are tended to in Guam.

Paul McGinnis, Signalman Third Class, remembered how oppressive the sun beat down on him while he lay adrift in the ocean awaiting rescue. He said it was like “having your head in a hole in the middle of a mirror.” Desperate, the sailors began to drink salt water. They prayed for nighttime — only for the lack of sun to leave them all near freezing.

All the while, sharks circled the floating men and picked off helpless sailors at random. Granville Crane, Machinist’s Mate Second Class, recalled how he had no choice but to “see the sharks eating your comrade.”

“All the time, the sharks never let up. We had a cargo net that had Styrofoam things attached to keep it afloat. There were about 15 sailors on this, and suddenly, 10 sharks hit it and there was nothing left. This went on and on and on.”

As many as 150 men are thought to have fallen prey to the sharks. 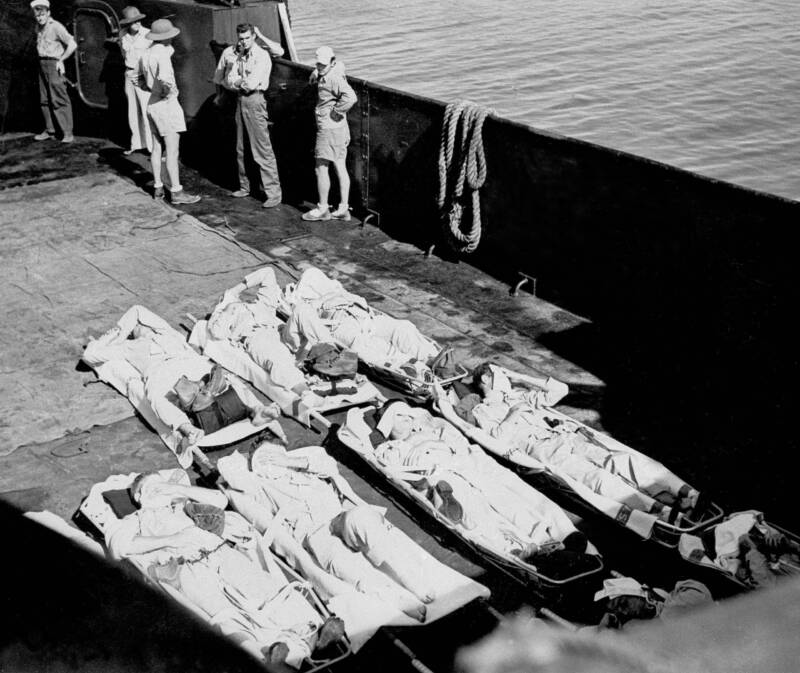 From his plane, Lieutenant Junior Grade Wilbur “Chuck” Gwinn reported that he saw nothing but men covered in oil, waving at the promise above them. Rescue planes subsequently dropped down survival crafts and towed them up.

Rediscovering The Wreck Of The USS Indianapolis 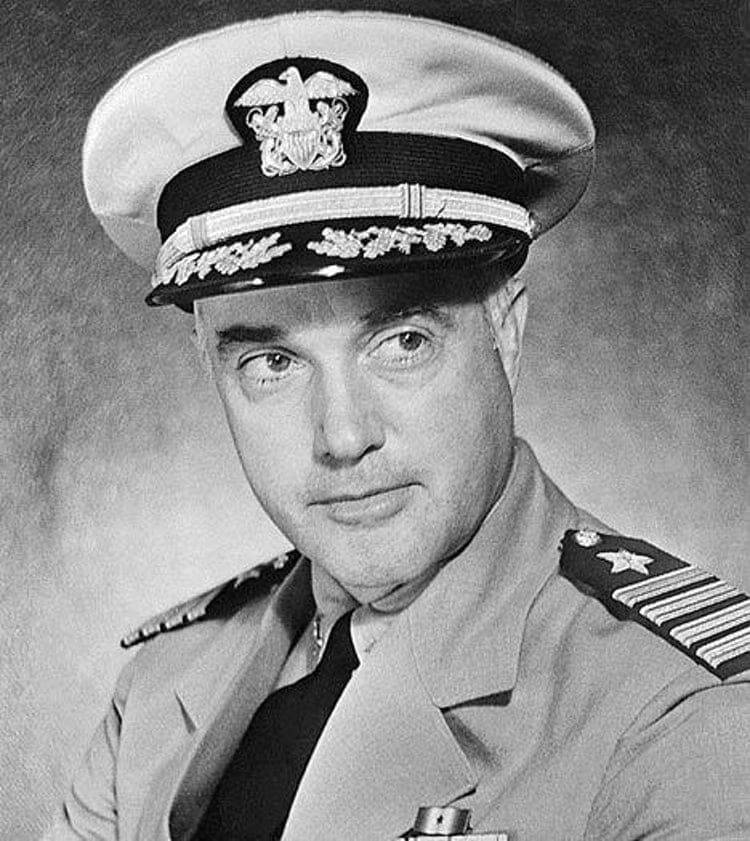 U.S. Navy photoCharles McVay committed suicide on his front lawn with his Navy revolver. A toy sailor was found in his hand.

Among the survivors was the Indianapolis’ captain, Charles B. McVay III. In a highly controversial move, the commanding officer was court-martialed for his failure to perform evasive tactics that might have prevented the ship’s demise. 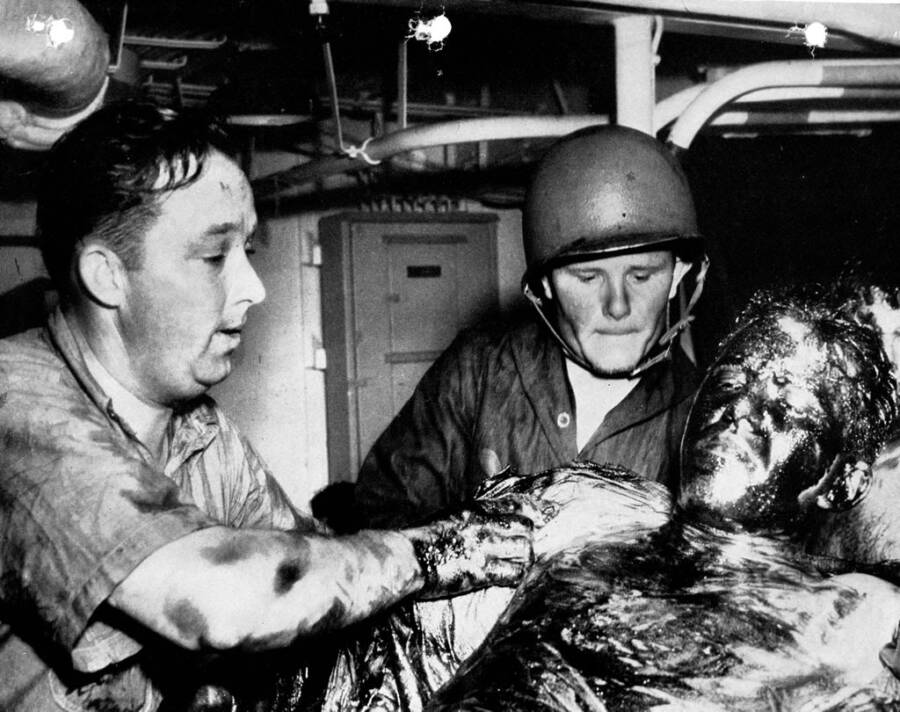 United States NavyThe survivors were covered in oil from the explosion aboard the ship, making their rescue all the more difficult.

Even though the commander of the Japanese submarine that sank Indianapolis testified at McVay’s trial that those evasive maneuvers would not have proved effective, McVay was nonetheless found guilty and stripped of his seniority. After years of anguish, he committed suicide in his front yard in 1968.

It was later discovered that the U.S. Navy had known Japanese submarines were operating in the area around the USS Indianapolis but that McVay had not been warned. Consequently, a campaign was launched to clear his name and he was exonerated by the efforts of a sixth grader’s history project in 2000.

To learn more about McVay’s unprecedented trial, check out our podcast on the sinking of the USS Indianapolis below:

Listen above to the History Uncovered podcast, episode 6: The USS Indianapolis, also available on iTunes and Spotify.

The last living officer and oldest remaining survivor of the tragedy, Don Howison, died at the age of 98 in 2020. As it stands, there are only 10 USS Indianapolis survivors still alive.

In August 2017, the wreck of the Indianapolis was discovered 3.4 miles beneath the surface of the Pacific by a team led by Microsoft cofounder Paul Allen. The ship was discovered after a collection of records pinpointing its location 11 hours before it sank were found by a Naval historian the previous summer.

Quint’s famous monologue aboard the Orca in Jaws was no work of fiction. He was describing the wreck of the Indianapolis.

“I’m very happy that they found it. It’s been a long 72 years coming,” said 93-year-old Indianapolis survivor Arthur Leenerman at the time.

“I have wished for years that they would find it. The lost at sea families will feel pretty sad but I think finding the ship will also give them some closure.”

Today, there is a national memorial to those lost in the wreck of the USS Indianapolis in Indianapolis.

After learning about the wreck of the USS Indianapolis, read about Richard Bong, the best American fighter pilot in World War II. Then, learn about the aftermath in Hiroshima following the atomic bomb.