It may be cute, but the dumbo octopus is also tough — it can thrive in one of the harshest environments known to man, four miles below the surface of the ocean.

At first glance, the dumbo octopus appears more cartoonish than it does resilient. Yet, these adorable cephalopods are in fact the deepest-living octopus on the planet and thrive in the cold depths four miles below the surface of the sea.

They are also incredibly rare creatures and have so far seemed to have escaped humanity’s gargantuan environmental footprint thanks to their ability to flourish in one of the planet’s most unforgiving ecosystems.

What Makes The Dumbo Octopus Unique 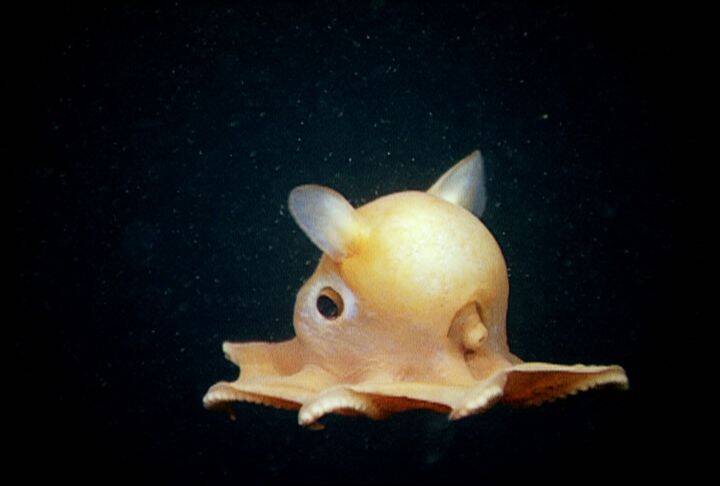 Monterey Bay Aquarium Research InstituteThis so-called flapjack octopus is a species of umbrella octopus. These creatures are so cute that scientists considered naming them “adorabilis.”

The dumbo octopus, or Grimpoteuthis, is so-named for the distinct shape of its fins which closely resemble the ears of an elephant. Naturally, its nickname is a reference to the classic Disney animated movie, Dumbo.

Dumbo octopuses refer to an entire genus of umbrella octopuses, which have a web of skin connecting all of their limbs. These creatures resemble an open umbrella when they have spread all their tentacles. Scientists have so far identified 15 species of dumbo octopus.

These deep-sea creatures move about slowly in the dark depths by flapping their fins and using their arms to steer. 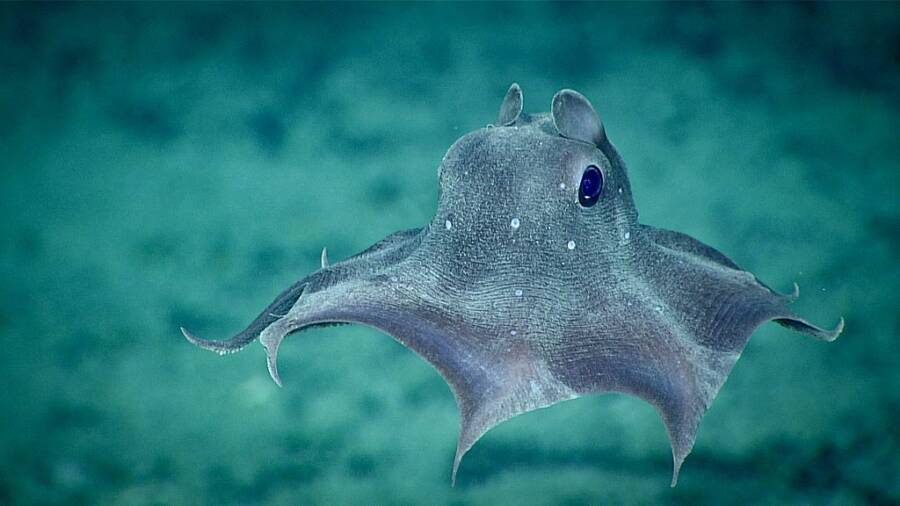 Wikimedia CommonsThere are 15 known species of Grimpoteuthis or dumbo octopus in the world.

Dumbo octopuses make their home at least 2.5 miles or 13,000 feet beneath the ocean’s surface, making them the deepest living octopus species in the world.

But their ability to dwell in the deepest corners of the Earth has proven to be quite the asset.

Life In The Deep Sea

The dumbo octopus is somewhat of a small creature. They typically measure up to 11 inches in size, or the length of a full-grown guinea pig, though the largest specimen ever recorded by scientists measured six feet.

They feast on pelagic invertebrates, like krill, copepods, and jellyfish, that swim near the sea floor. But because prey can be scarce this deep in the ocean, dumbo octopuses are quick to finish their meals and will swallow their victims whole. 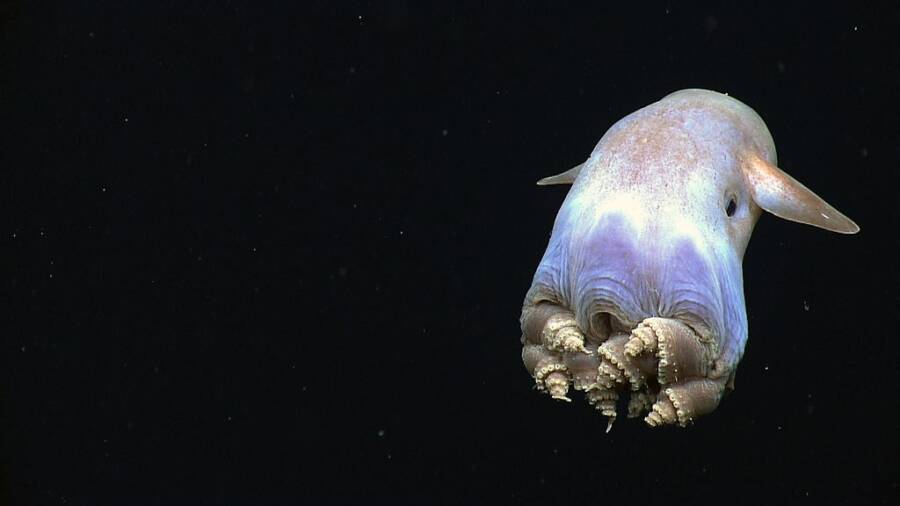 Wikimedia CommonsFemales have the unique ability to carry eggs in various stages of development and can store male sperm for later which allows them to reproduce at any time without a mate present.

In addition to prey, mates can be scarce at these depths and so dumbo octopuses have evolved to breed in miraculous ways. Female dumbo octopus have the ability to reproduce at any time after securing a mate. They do this by saving the sperm they receive from a partner and using it at their disposal.

To this end, female dumbo octopus also always carry eggs that are in different stages of development. Females will lay eggs continuously on rocks, corals, or shells.

Living this deep in the ocean also has its benefits. For one thing, dumbo octopuses are largely safe from predators and thus do not have a defensive ink sac like other octopuses, including the incredible coconut octopus, which can use shells as though they were tools for shelter or hunting. Other octopuses employ more offensive methods to protect themselves, like the blue-ringed octopus, which is incredibly venomous.

Living miles below the ocean’s surface keeps the dumbo octopus safe from predators like dolphins and sharks.

Like other octopuses, however, the dumbo octopus is a master of disguise and can flush different colors or patterns in order to mimic its environment. Sometimes, it’s ear-like fins will remain one color while the rest of its body changes.

Scientists believe that dumbo octopuses can be found around the world, though they have so far only been spotted in territories around the Indian Ocean and North Pacific Ocean in the waters around the Philippines, Australia, New Zealand, New Guinea, and California.

The most recent dumbo octopus encounter caught on camera was in June 2020. A group of researchers recorded the creature more than four miles below the ocean’s surface in what is known as the Sunda Trench off the Sumatra island of Indonesia. This is the deepest depth on record at which a dumbo octopus has been seen. 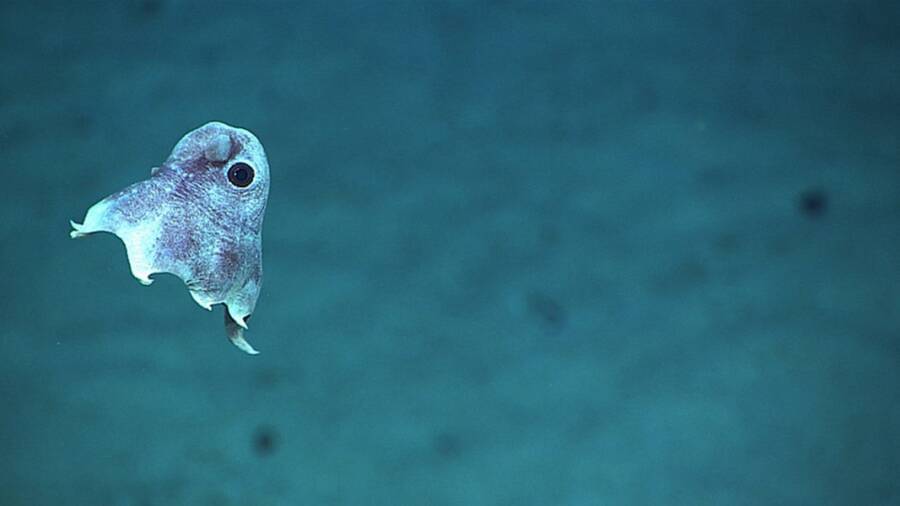 Moreover, that octopus is believed to be an entirely new species of Grimpoteuthis never before seen.

Alan Jamieson, the CEO of deep sea exploration company Armatus Oceanic and the marine ecologist who led this expedition, said that the cuteness of the dumbo octopus might change people’s ideas about deep sea creatures are like. “This is just a cute little octopus doing what octopuses do,” Jamieson said, “there’s nothing particularly weird about it. So hopefully, people might feel a greater attachment to the really deep waters as opposed to the scary, horrible, weird environment that it’s made out to be.”

Indeed, so far we only know little about the dumbo octopus largely because of its inaccessible habitat. But its isolation has also largely protected it from humans, particularly boaters and fisherman.

Here’s to hoping that these adorable cephalopods remain safe near the ocean floor.

Next, find out how the blue-ringed octopus is both one of the world’s deadliest and most adorable creatures, and checkout 29 of the most fascinatingly weird animals from around the world.