The coconut octopus is known for displaying atypical behavior for sea creatures, including using shells as tools and walking 'bipedal' on the ocean floor. 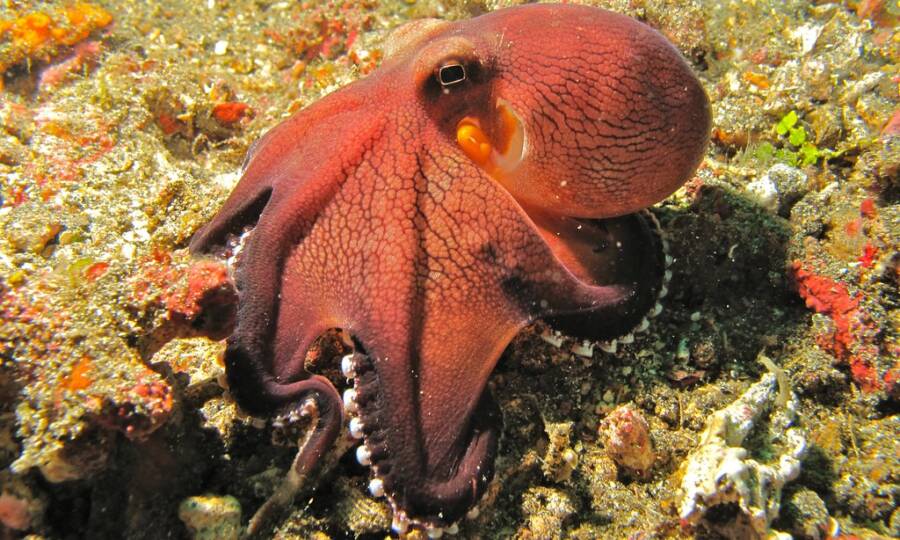 Bernard Dupont/FlickrPink coconut octopus in the waters of Makawide Island in Sulawesi, Indonesia.

The designs of nature are endlessly fascinating, particularly among marine wildlife. But perhaps no sea creature is as seemingly crafty as the coconut octopus, a species of octopus that got its name from its peculiar habit of using coconuts or sea shells on the ocean floor to assist in its daily activities. 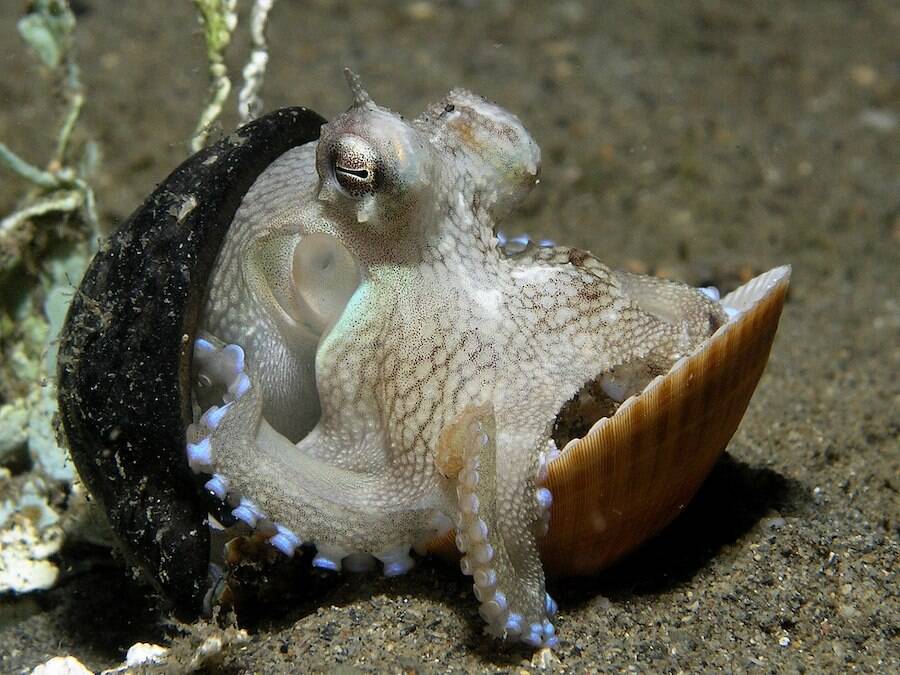 If you ever find yourself swimming at the bottom of the western Pacific Ocean, make sure you pay close attention to what is happening on the sea floor. If you are lucky, you might spot a coconut octopus in action.

This stunning cephalopod — known by its latin name Amphioctopus marginatus — is one of 300 species of octopus that have been recorded and described by scientists so far. Like most octopus species, the coconut octopus has a soft body that consists of its head and eight tentacles which it uses to swim, eat, and do other activities.

But the coconut octopus has a distinct behavior that separates it from its other eight-tentacle brethren and inspired the animal’s silly moniker. In fact, this sea creature displays a couple of atypical behavior for invertebrates, including the use of coconuts and shells as makeshift tools.

Indeed, the coconut octopus is known to collect coconut shells or sea shells on the sea bed and uses the pieces to protect itself. This octopus species typically grows up to six inches long, including the length of its tentacles, making the empty cocoons of halved coconuts and sea shells the perfect hiding spot.

As a whole, octopus are known to be highly-intelligent creatures. But while it is common for them to use foreign objects as temporary shelters, it is unusual for an animal to hang on to an object for later use as the coconut octopus does with its shells. Once a coconut octopus selects a coconut shell that it likes, it will carry the shell around with it until the sea creature is ready to use it again.

The coconut octopus also uses shells to hunt for prey.

The coconut octopus’ save-it-for-later approach suggests advance planning on the part of the creature which by extension also suggests a level of intelligence that is not typically expected from animals besides humans.

Apart from the obvious advantage of having a solid armor piece, the coconut or sea shell also acts as a booby trap for prey.

The coconut octopus will hide inside its makeshift protection as its prey approaches, and pounce out at the right moment to capture its meal. The coconut octopus — which is sometimes referred to as the veined octopus — enjoys a diet of various crustaceans, like crabs, clams, and shrimp.

When the octopus is not using the shell, it will wrap its tentacles around the concave object and use the rest of its tentacles to move about, as if stilt-walking.

This peculiar method in its movement across the sea floor makes it appear almost bipedal as it carries its shell-made shelter and scurries about. It is evidence of another unusual behavior among invertebrates that is only found among this particular species of cephalopod.

The Octopus’ Ingenuity Has Stunned Scientists

Marine biologists believe that the coconut-carrying octopus is the only invertebrate to be recorded using tools.

The researchers caught the coconut octopus in the act during a series of diving trips around the islands of North Sulawesi and Bali in Indonesia years prior, behavior that had never been scientifically studied before.

“I was gobsmacked,” Julian Finn, a research biologist at the Victoria Museum in Melbourne who specializes in cephalopods, said of witnessing the act. “I mean, I’ve seen a lot of octopuses hiding in shells, but I’ve never seen one that grabs it up and jogs across the sea floor. I was trying hard not to laugh.”

The scientists filmed the octopus selecting halved coconut shells that had been lying on the sea floor. The octopus emptied the shells out before carrying them under their tentacles and using two shells to create a makeshift yet solid mobile shelter.

Since its discovery, the behavior of the coconut octopus has stunned marine biologists who say that the animal’s deliberate use of tools in the form of coconut shells to achieve a specific objective — as protection or hunting method to catch prey — was proof of the coconut octopus’ advanced intelligence. 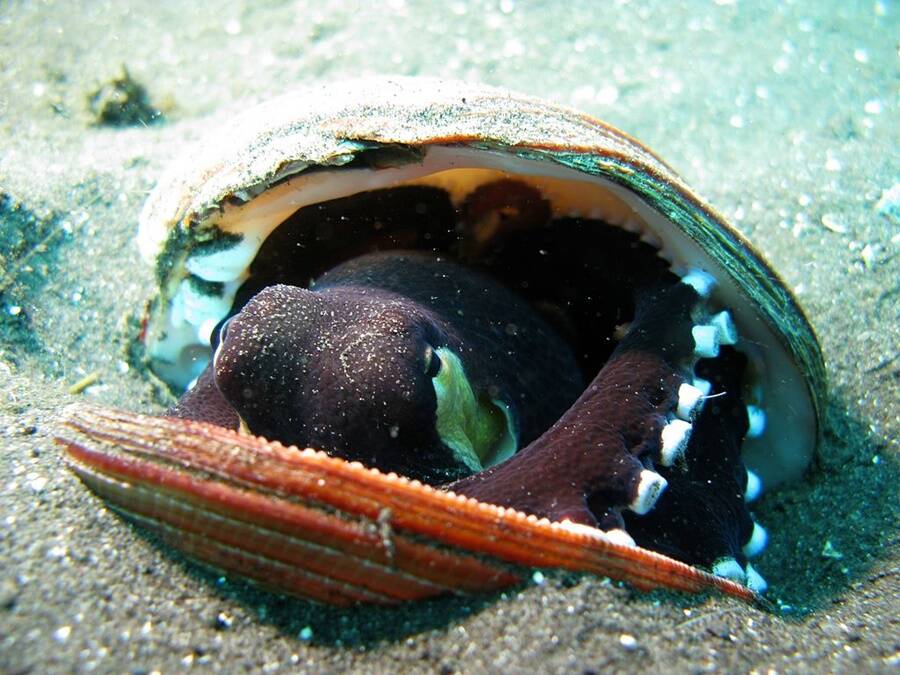 Wikimedia CommonsCoconut octopus, or amphioctopus marginatus, are the only known invertebrates to showcase sophisticated tool use.

While other octopus species have been known to use foreign objects as shelters, the fact that the octopus performs all these complex behaviors in its use of the shells — collecting them, preparing them, and keeping them for later use — sets its kind apart from the rest.

“What makes it different from a hermit crab is this octopus collects shells for later use, so when it’s transporting it, it’s not getting any protection from it,” Finn said. “It’s that collecting it to use it later that is unusual.”

In other words, the act of advance planning is a unique behavior that has not been exhibited by any invertebrate animal except for the coconut octopus.

The way the coconut octopus meticulously prepares the coconut shells before using them by blowing jets of mud out of the bowl is also incredible to witness.

However, there is still much debate in the scientific community about the definition of “tool use” among animals as the original study also acknowledges.

According to Associate Professor of Tropical Biology Simon Robson, who teaches at James Cook University in Townsville, Australia, the varying definitions of what is considered animal behavior displaying “tool use,” makes it difficult to determine whether the study of the coconut octopus is the first evidence of such behavior among invertebrates.

Despite this, Robson noted that the finding is still deeply fascinating.

“It’s another example where we can think about how similar humans are to the rest of the world,” Robson said. “We are just a continuum of the entire planet.”

Now that you’ve discovered the intricate behavior of the coconut-carrying coconut octopus, learn about the astounding mimic octopus — the impersonator extraordinaire of the deep sea. Next, discover the six most amazing oceanic creatures in the world.