The Astounding Mimic Octopus – Impersonator Extraordinaire Of The Deep Sea

The mimic octopus is one of the smartest and most adaptable creatures in the ocean.

The mimic octopus is the chameleon of the sea. With the ability to change its color, texture, and behavior, it mimics whatever life forms are in its current environment. Scientists believe that it can mimic up to 15 other different types of marine species.

Officially named the Thaumoctopus mimicus, the mimic octopus is a relatively new scientific discovery. It was only discovered by scientists in 1998 off the coast of Sulawesi, Indonesia. It is known to live most commonly in the Indo-Pacific Ocean, but scientists are not sure of the exact habitat and believe it may be native to other tropical waters that have not yet been explored.

Most recently, a mimic octopus was spotted as far away as the waters off Lizard Island in Queensland, Australia, near the Great Barrier Reef. 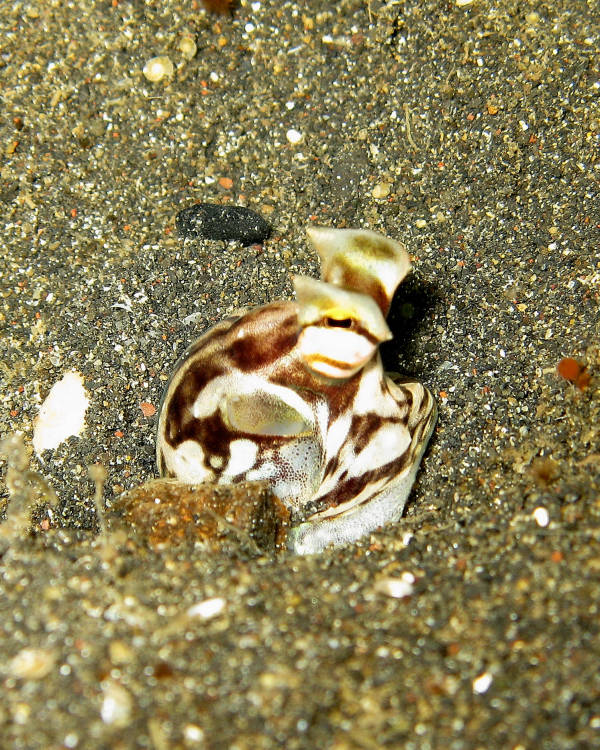 Naturally a brownish-beige color with a small body, the octopus floats across the muddy seafloor, hunting for small fish and crustaceans to eat. It uses its mimicry to blend into its surroundings, posing as a potential mate in order to lure its prey. Once it gets close enough, the octopus uses its suction cups to latch onto their food. It forages for food as well, drifting along the ocean floor and digging its tentacles into crevices and hole in order to pull out crabs with their suction cups. They do not eat plant life or any vegetation.

Although the octopus occasionally uses aggressive mimicry to attract prey, its main use is to avoid their own predators. The octopus is food for creatures like jellyfish, stingrays, sea snakes, lionfish, and the poisonous sole fish, among others.

To avoid being spotted, the octopus mimics the characteristics and behavior of its predator, changing color, shape, and even swimming speed and direction to blend into its surroundings.

Sole fish are flat, fast swimmers, so the octopus will pull its tentacles into a leaf shape and use jet propulsion to match the speed of its predator. But when faced with a sea snake, it will spread two of its tentacles in opposite directions to match the shape of the snake’s body, while changing the color of its body to yellow and black bands.

Even more remarkably, the octopus has been observed impersonating a creature that is an even greater threat to its predator. For example, when a damselfish is nearby posing a threat to the octopus, the octopus, instead of trying to blend in, mimics the banded sea snake, which is a threat to the damselfish, thus scaring them off. They possess the ability to determine which sea creature would be the biggest threat to their current adversary, and then adjust their behavior accordingly, in order to ensure their own survival. 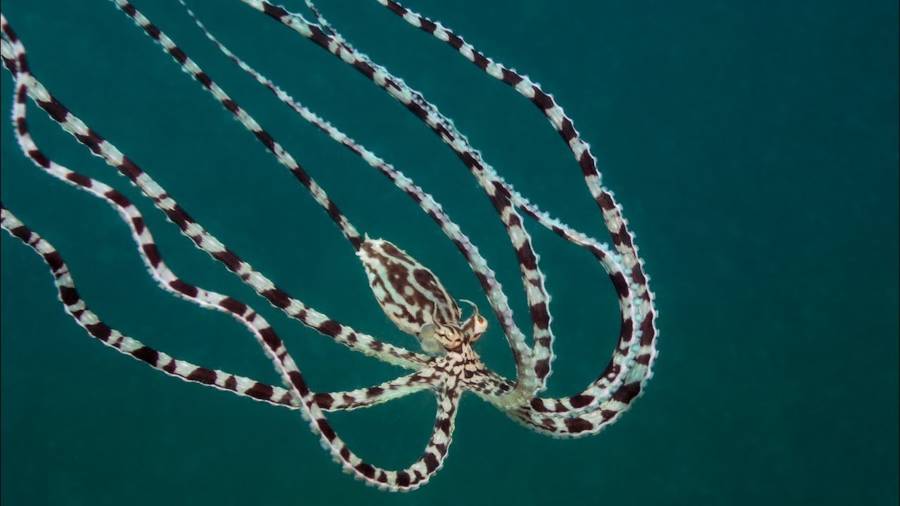 Their camouflaging ability gives them several environmental advantages. It enables them to live in relatively shallow waters, normally less than fifty feet deep, often near the mouths of rivers. They are also most active in the daylight. For other creatures, this would make them particularly susceptible to other predators, but their ability to blend in makes them difficult to spot even in the best of conditions, in shallow waters in broad daylight.

Even with their remarkable ability to avoid prey, their lifespan is still only around nine months long. Shortly after inserting the sperm into the female mantle cavity, the male octopus’s hectocotylus falls off and he dies.

The female survives only long enough to fertilize and carry the larvae until they mature. Once they hatch, the female dies and the larvae drift along until full maturity, when they sink to the bottom of the ocean floor and begin the cycle all over again.