Venture into the shadowy ocean deep with this gallery of the often bizarre suits that humankind wore in order to first dive below the surface. 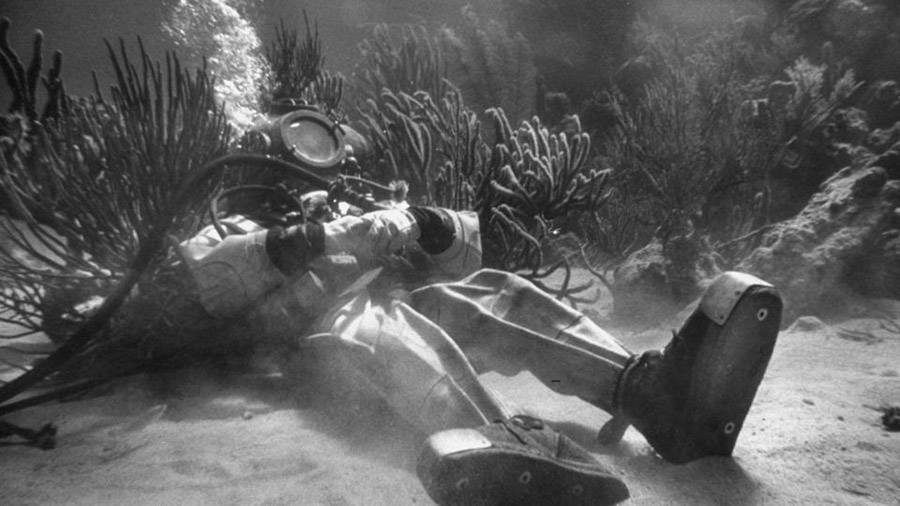 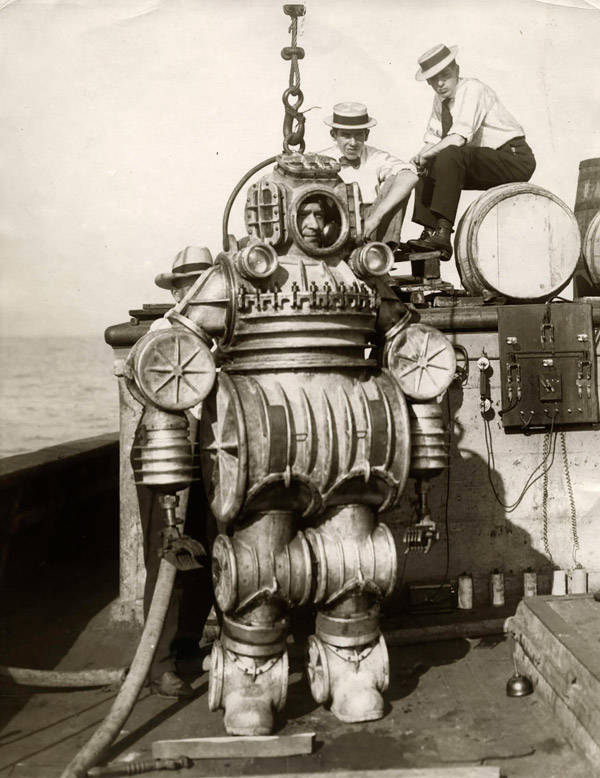 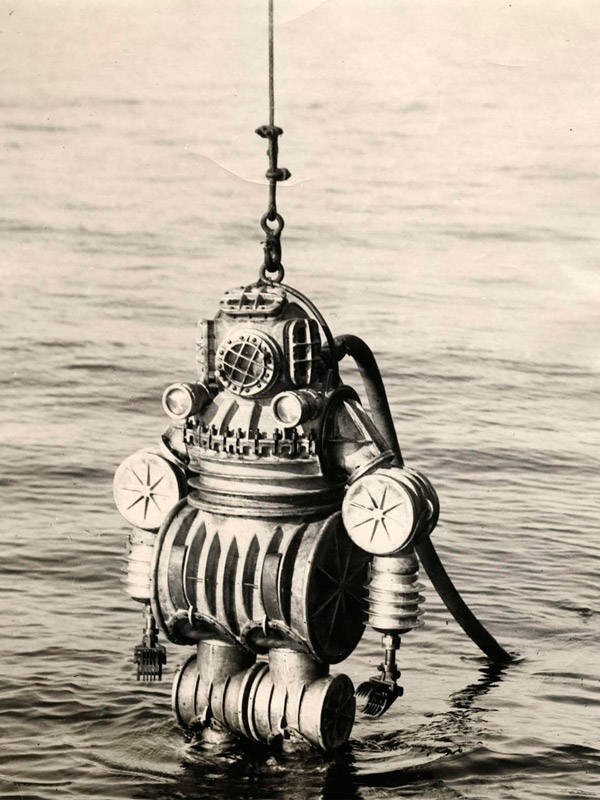 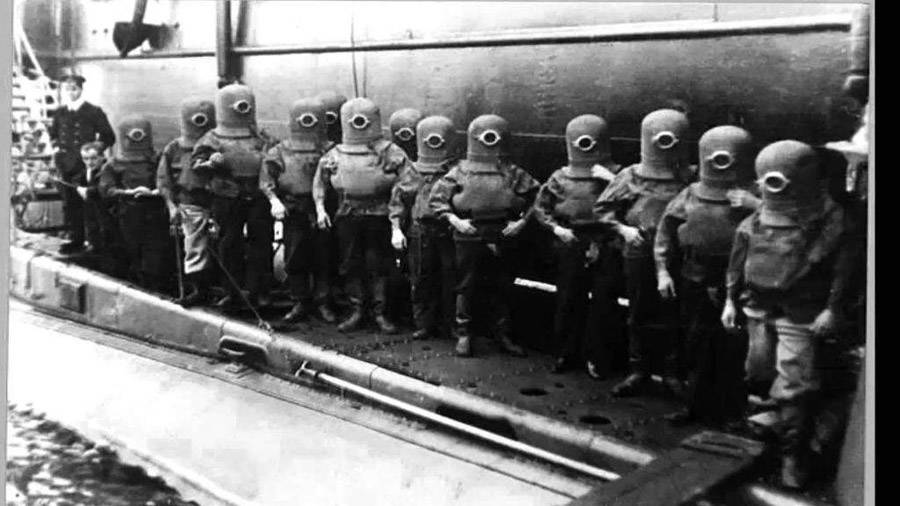 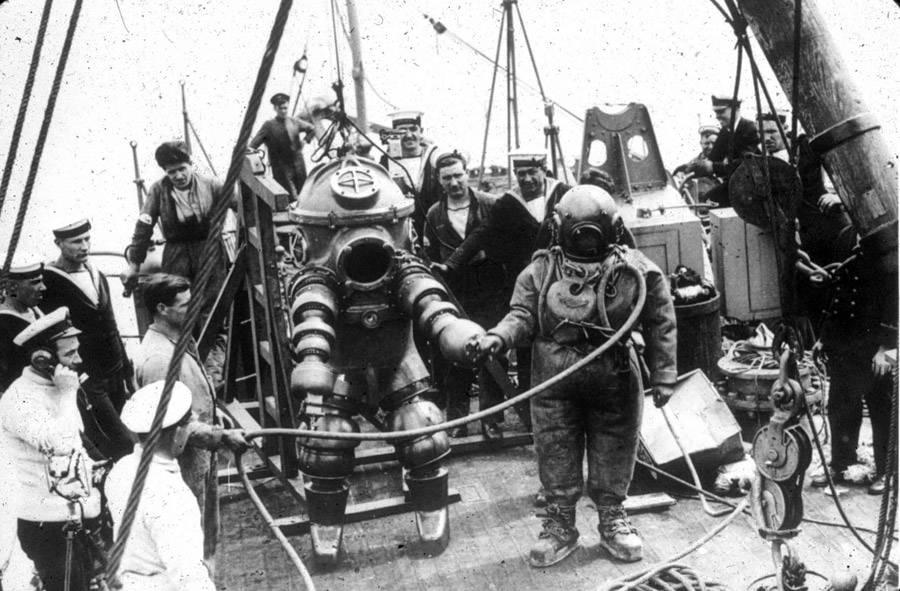 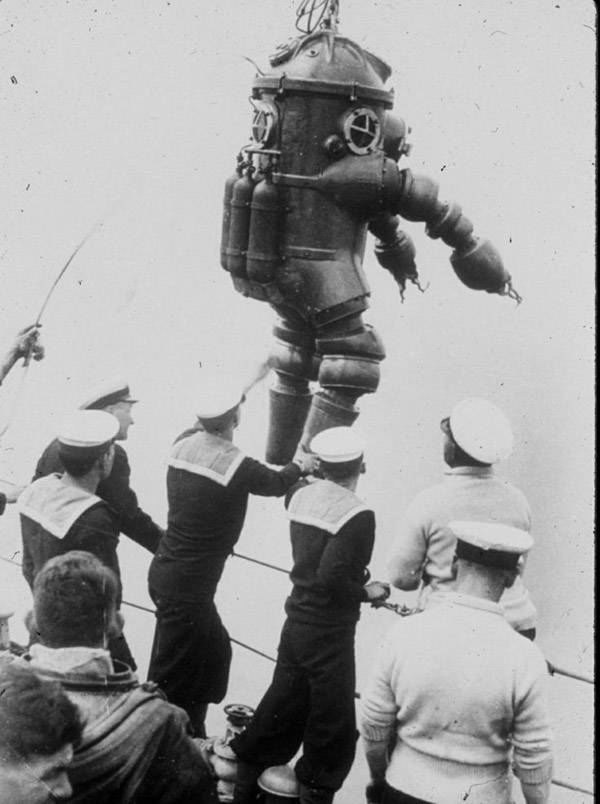 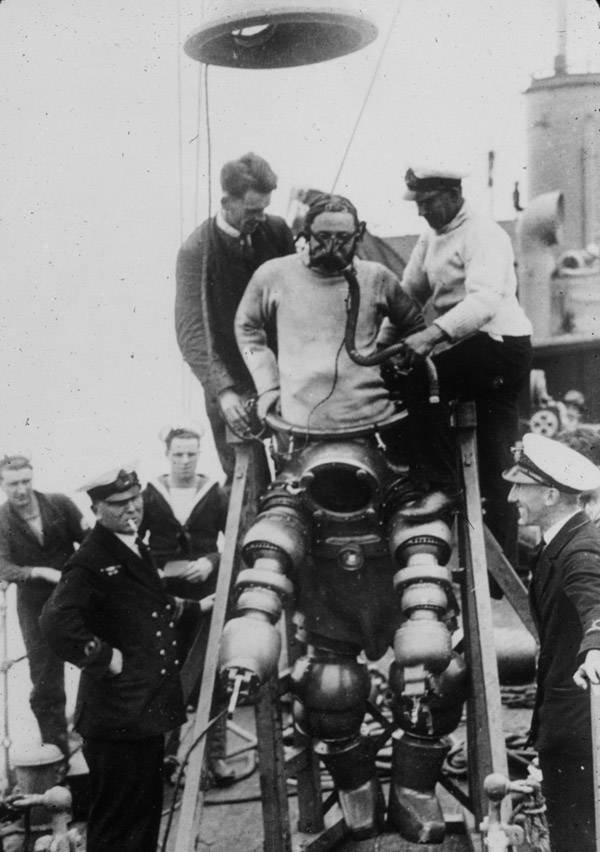 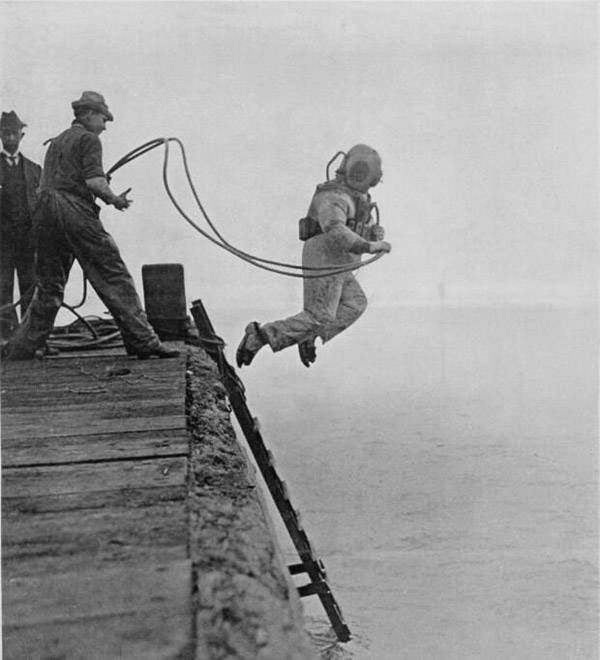 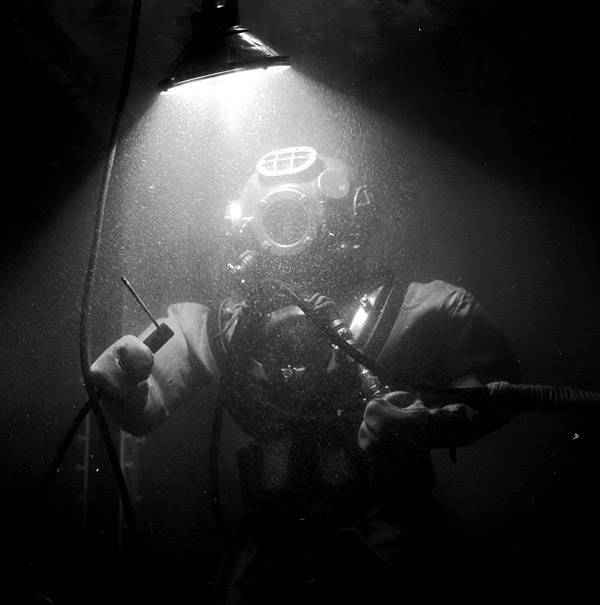 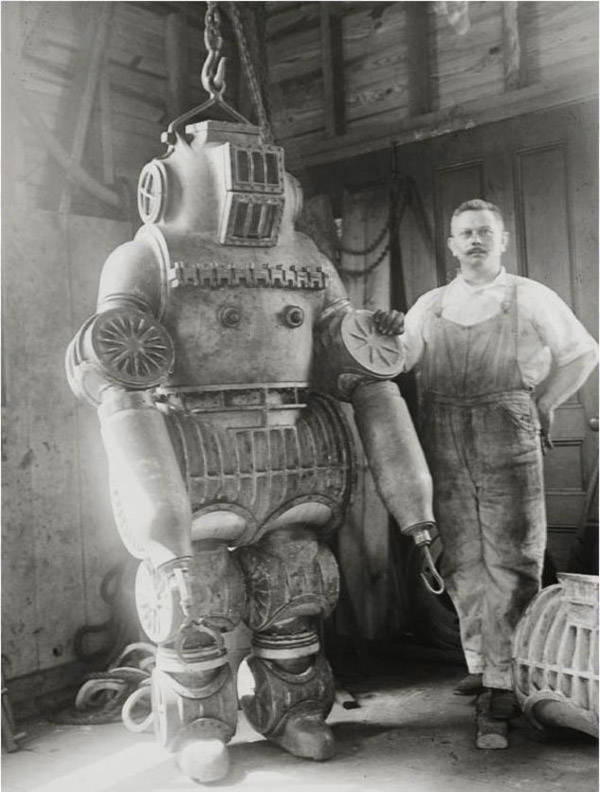 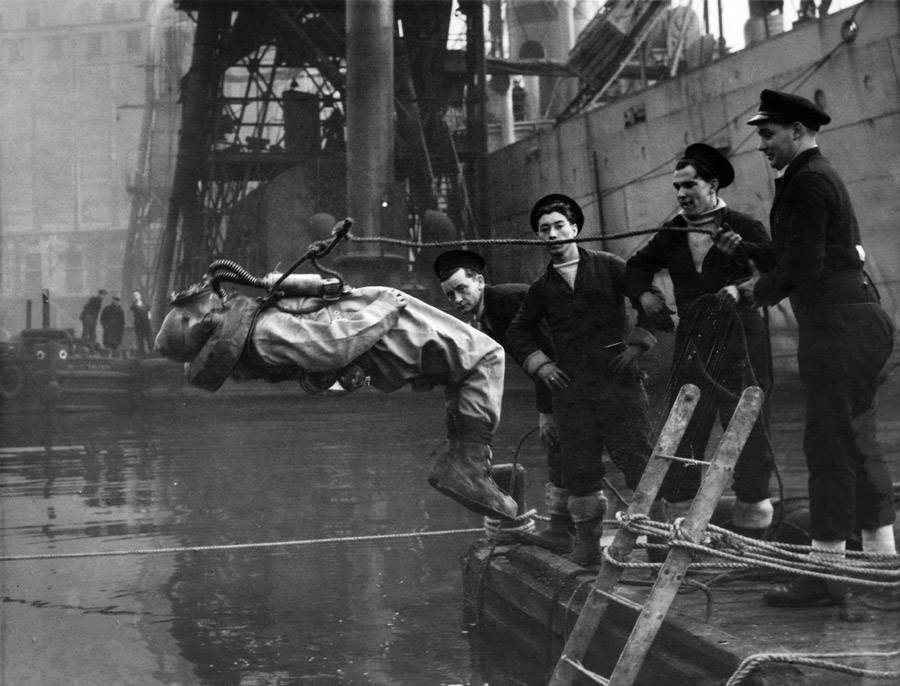 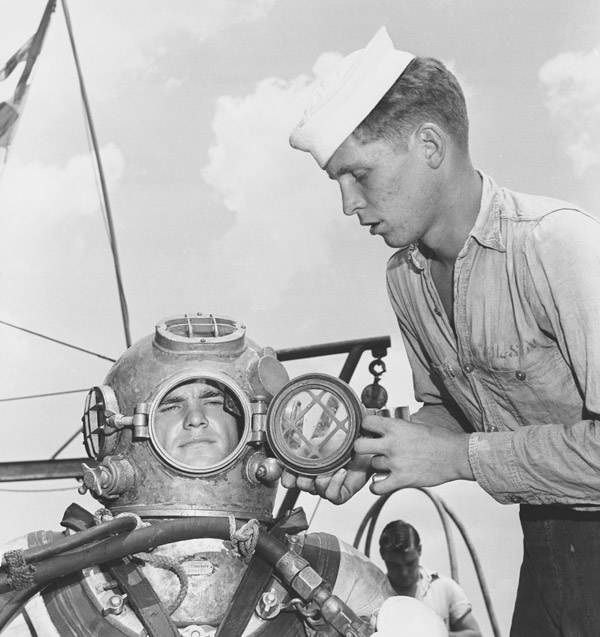 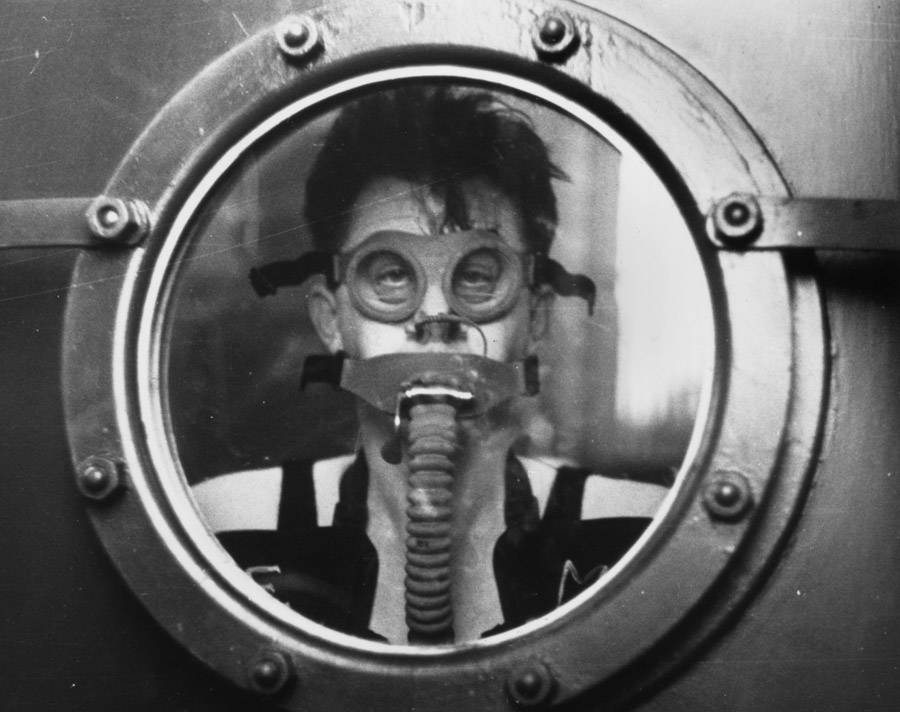 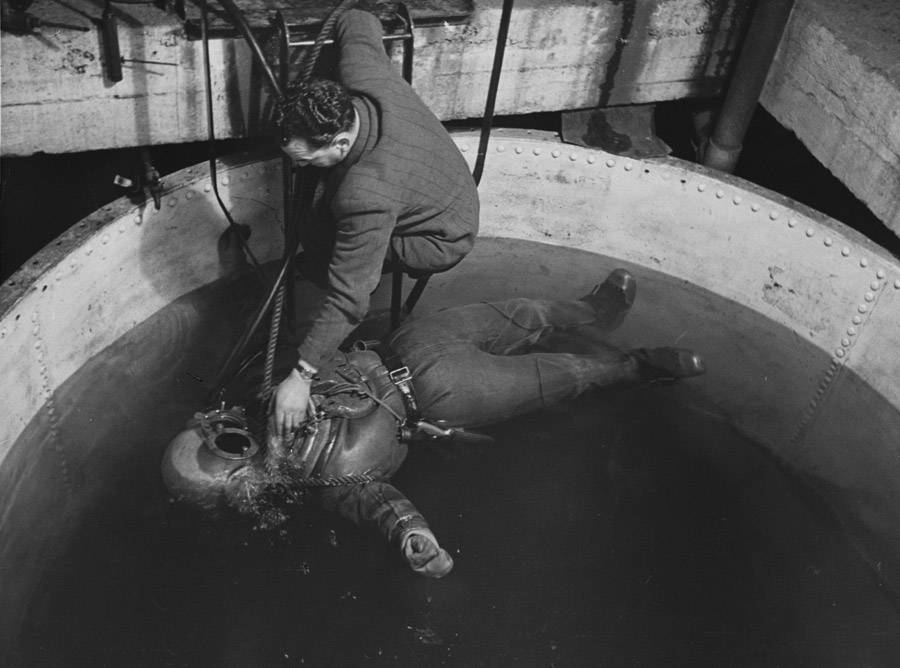 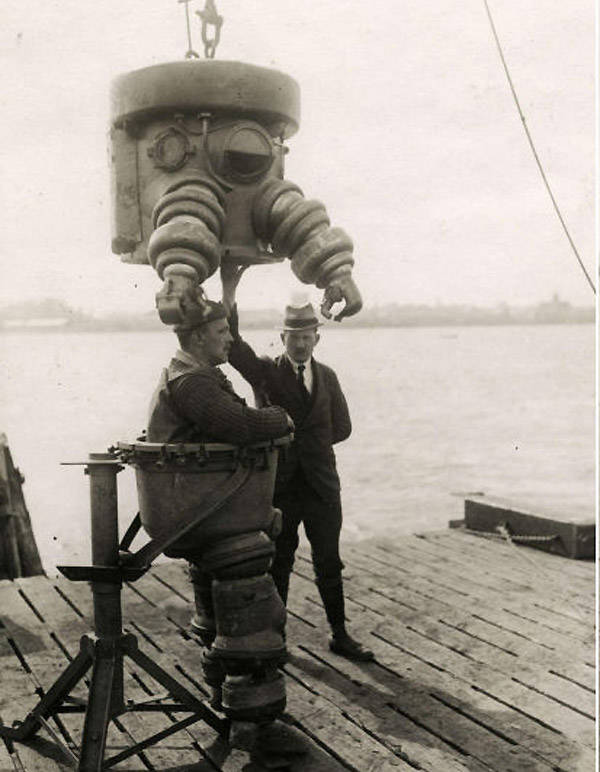 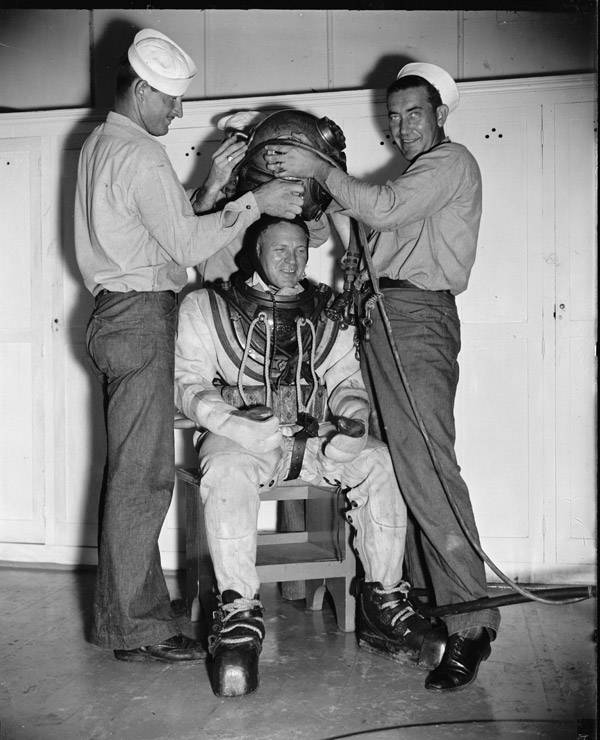 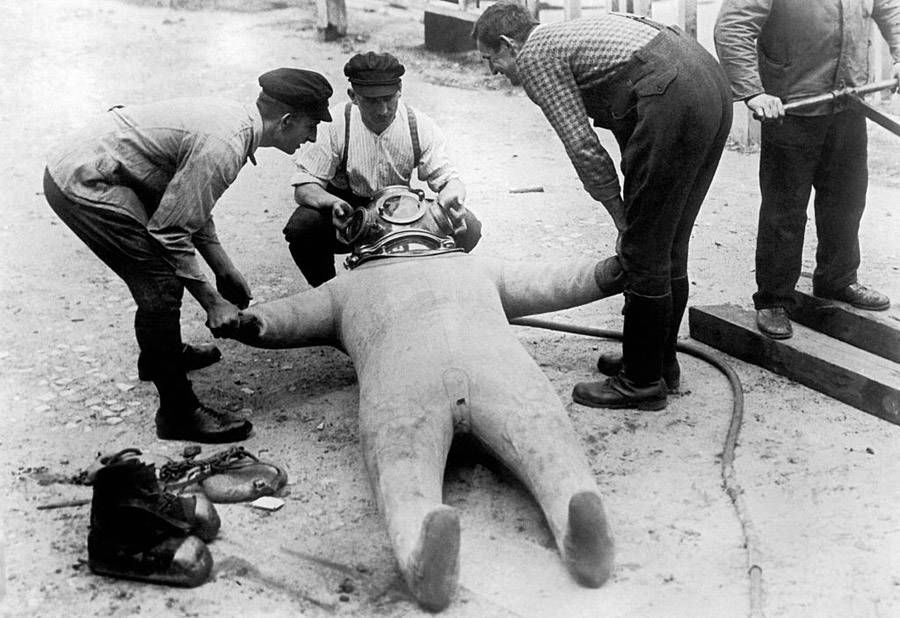 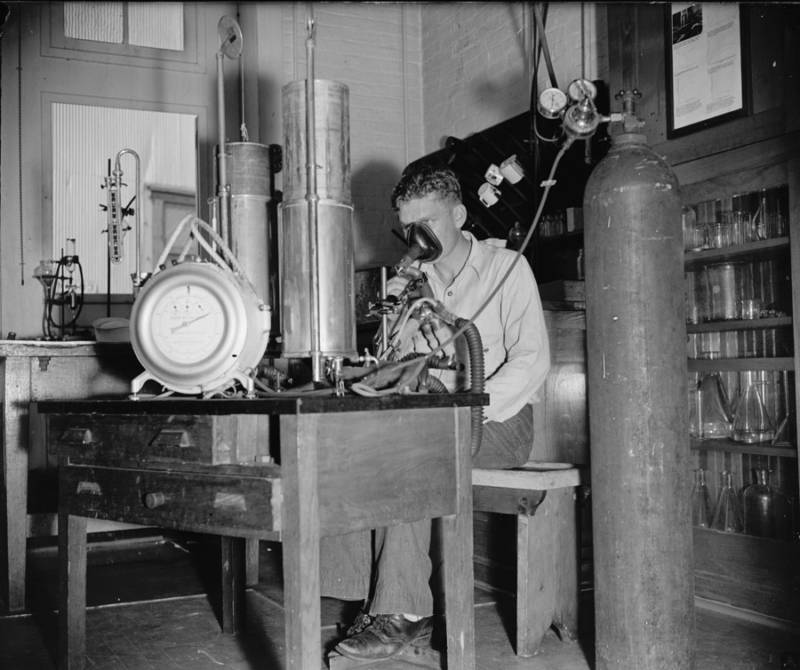 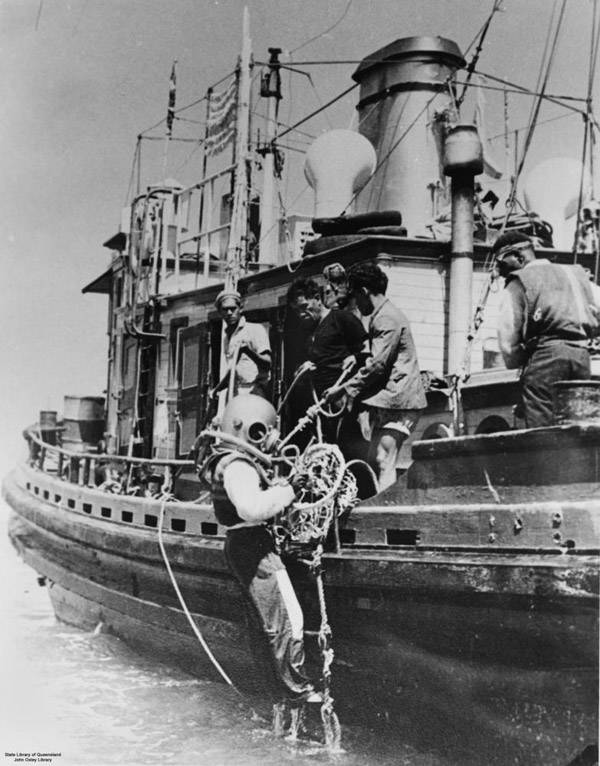 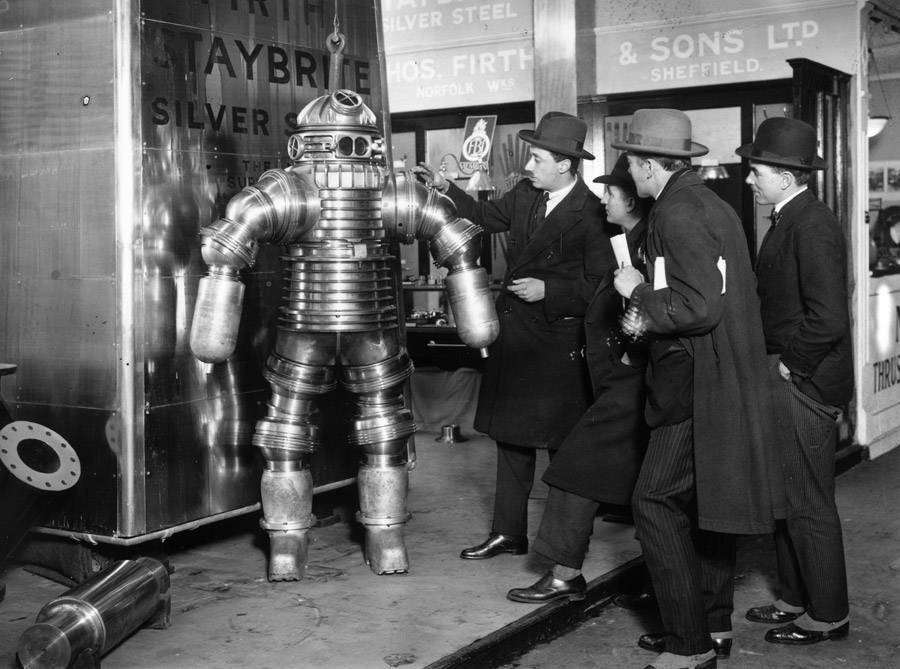 1 of 21
A diver with the U.S. Navy sits on the ocean floor, aided by heavy lead shoes that allow him to walk there. 1955. Library of Congress
2 of 21
Explorer O.E. Gandy stands in his iron suit, weighing 540 pounds, before making a dive where he would reach a depth of 230 feet. 1907.The Brooklyn Eagle/Brooklyn Public Library
3 of 21
O.E. Gandy is slowly lowered into the ocean. 1907.The Brooklyn Eagle/Brooklyn Public Library
4 of 21
Submarine crew members pose wearing their special escape helmets. The helmets incorporated a canister with "oxylithe," a special chemical which, when breathed upon, gave off oxygen and absorbed carbon dioxide. 1908.Royal Navy Submarine Museum Library
5 of 21
Jim Jarret wears his diving suit, "Tritonia," as he prepares to dive 312 feet down to explore the wreck of the Lusitania, the British passenger ship whose destruction by a German U-boat in 1915 with 128 Americans aboard helped push the U.S. into World War I. 1935. National Oceanic and Atmospheric Administration
6 of 21
Sailors assist Jim Jarret as he is lowered into the deep. 1935.National Oceanic and Atmospheric Administration
7 of 21
Jim Jarret is helped into the Tritonia atmospheric diving suit. 1935.Wikimedia Commons
8 of 21
Two men hold a diver's oxygen hose as he jumps in for a dive. 1915. National Oceanic and Atmospheric Administration
9 of 21
A diver from the U.S. Navy Salvage School in Bayonne, New Jersey adjusts his air pressure with his left hand while working underwater with a welding torch. More air would cause him to rise and less to sink. Circa 1955. Al Barry/Three Lions/Getty Images
10 of 21
Chester E. MacDuffee stands beside one of the first atmospheric diving suits, made from aluminum alloy and weighed about 550 pounds. 1911.National Oceanic and Atmospheric Administration
11 of 21
A navy minesweeper diver plunges into the water in the Manchester Ship Canal in the U.K. 1945. WATFORD/Mirrorpix/Mirrorpix via Getty Images
12 of 21
A diver listens for the test of the phones and air flow inside his helmet before the face plate is closed. Date unspecified. Hulton-Deutsch Collection/CORBIS/Corbis via Getty Images
13 of 21
A British Navy diver sits in a decompression chamber after finishing a dive. Circa 1945. Stringer/Hulton Archive/General Photographic Agency/Getty Images
14 of 21
An instructor helps a student diver who has over-inflated his suit. When over-inflation occurs, the diver's limbs become useless, as they're too rigid to reach the air valve. Date unspecified. Hulton-Deutsch Collection/CORBIS/Corbis via Getty Images
15 of 21
A diver stands in a metal suit's lower half as he waits for the upper part to be lowered down. 1922. Memory of the Netherlands Library
16 of 21
U.S. Navy diver William Badders is helped with his suit before taking an experimental dive in a training tank at Washington's Navy Yard. 1938.

During his time in the Navy, Badders would make a record-setting dive of 500 feet. Library of Congress
17 of 21
A diving suit is inflated after a dive to prevent cracking in its surface. Berlin, Germany. Circa 1932.Underwood Archives/Getty Images
18 of 21
Diver E.B. Crosby breathes into a special apparatus that measures the amount of helium gas absorbed by the body after a dive. 1938. Library of Congress
19 of 21
A diver is assisted into the water by three deck hands from a pearling lugger. Thursday Island, Australia. 1948.Wikimedia Commons
20 of 21
Joseph Peress explains the workings of his new steel diving suit, made of Staybrite Silver Steel at a Shipping Exhibition in Olympia, Washington. 1925.E. Bacon/Topical Press Agency/Getty Images
21 of 21 Since humankind first paddled out into the sea in primitive canoes, life below the water's surface has been a place of alluring danger and mystery.

Yet, while the ancient Greeks were known for their impressive skill at freediving for harvesting pearls and sponges, it wasn't until the 16th century that divers could stay underwater for more than a few minutes with the use of diving bells (airtight chambers lowered into the sea). As useful as they were at the time, they were still incredibly limiting both in the depths that a diver could explore and the time they could spend underwater.

Then, in the 19th century, surface-supplied diving — different from scuba diving because air is supplied via an umbilical from the surface — would mark the first steps towards the modern diving of today.

We've all no doubt seen that era's bulky copper diving helmets sitting on the shelf as decoration at some seafood restaurant. As cumbersome as they might look, however, these helmets revolutionized underwater sea exploration when they were invented in the 1820s (though, oddly enough, the helmet was invented to be used as a breathing device for firefighters).

In addition to those helmets, watertight canvas diving suits filled with air worked to combat the ocean's pressure and metal boots known as "heavy footers" allowed the diver to walk on the ocean floor. This completed diving suit would be used by the military and explorers for everything from minesweeping to working on bridges and exploring shipwrecks.

As technologically advanced as these suits were for the time, they still limited the depths to which men could plunge without being crushed by the ocean's unrelenting pressure.

For reaching the deepest of the deep, humans would need to be encased in the strongest of steel. The earliest atmospheric diving suits, developed in the 19th century, looked like space alien armor and because of their steel design could weigh as much as 850 pounds.

Advances in technology would gradually make the suits lighter — though not much less cumbersome — and eventually allow humans to venture over a mile under the water's surface. The most recent depth record was set by U.S. Navy Diver Daniel Jackson when he reached a depth of 2,000 feet in 2006. Jackson would describe his experience as "the best ride in the world."

Full of danger and surprise, the vintage deep sea diving photos above reveal the best ride in the world and serve as a reminder of humankind's constant pursuit to explore the unknown.

Next, dive back into the deep with this mesmerizing gallery of jellyfish facts. Then, check out more vintage photos of discovery with a look at the early days of Antarctic expeditions.