Not even 50 years ago, crowds in tourist spots like Atlantic City were lining up to watch diving horses perform death-defying stunts. 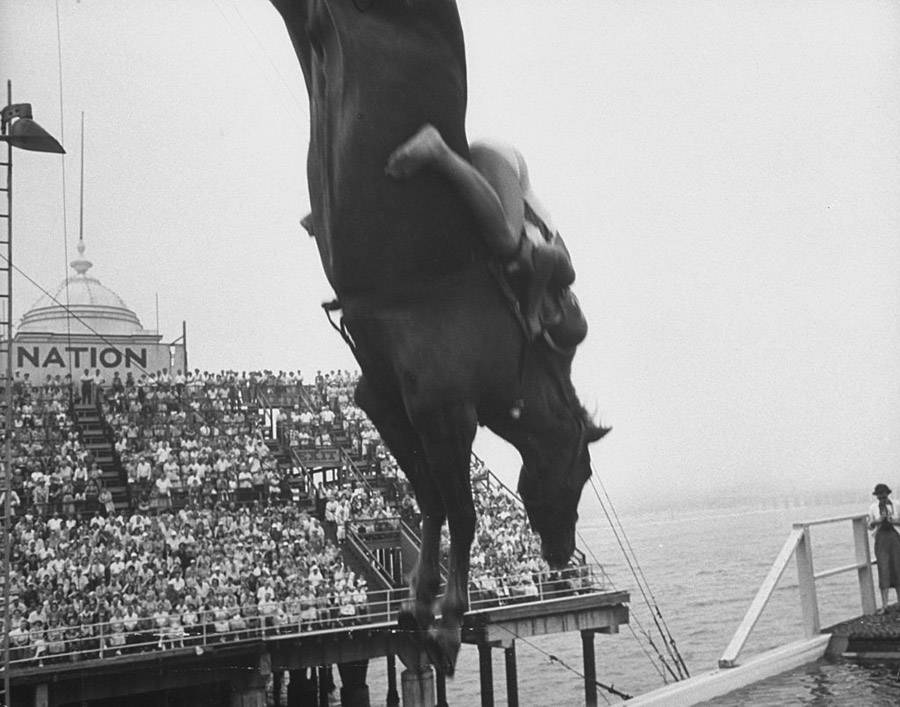 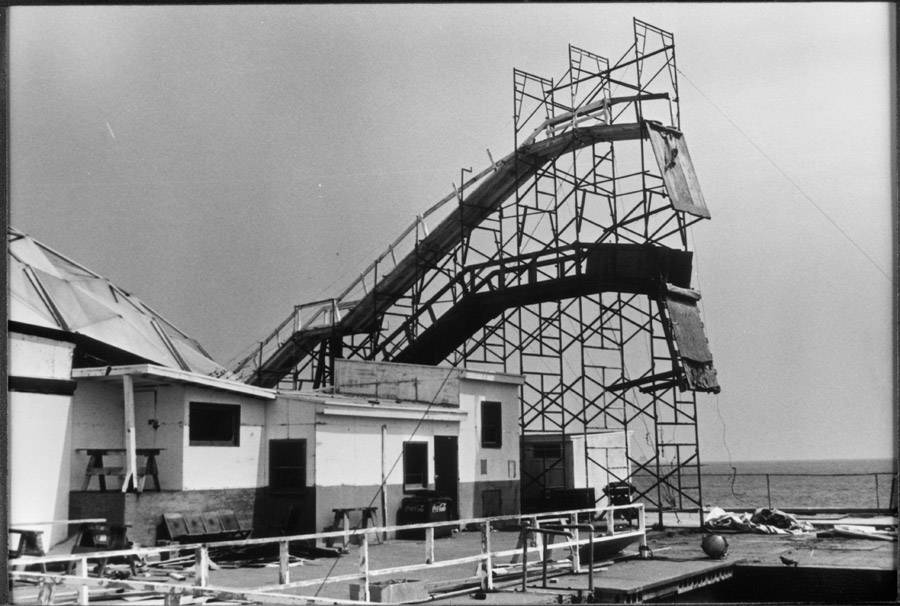 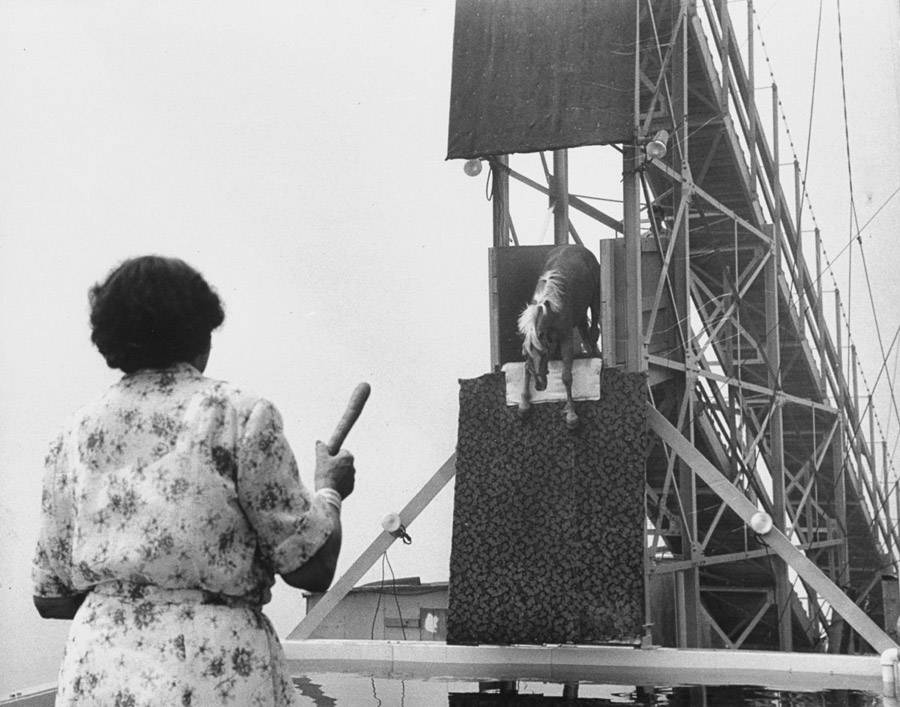 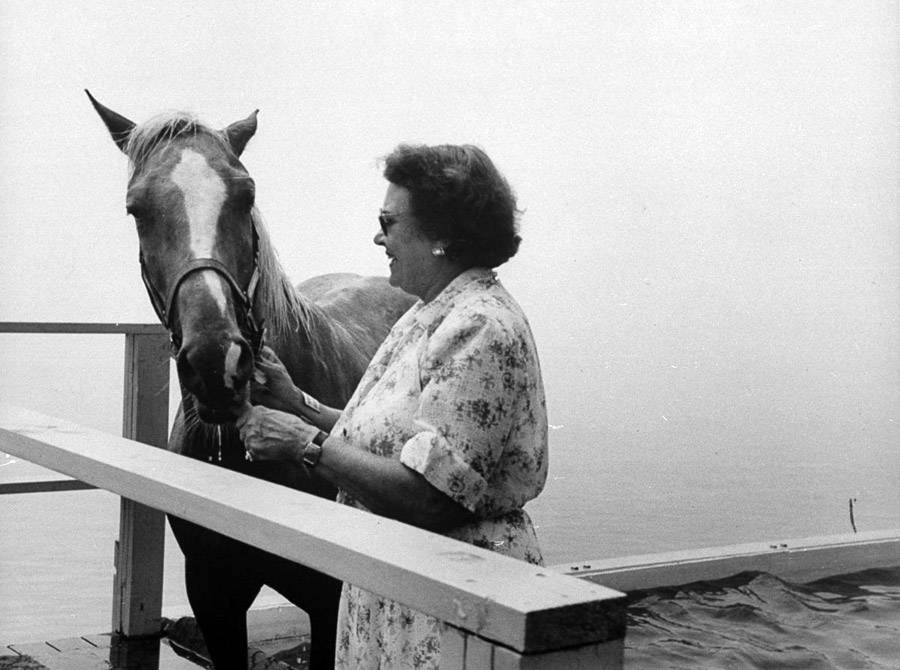 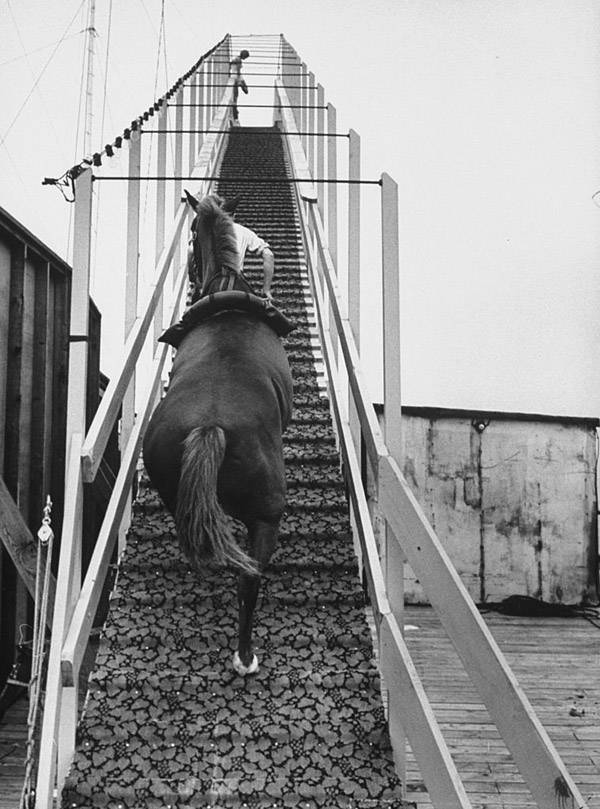 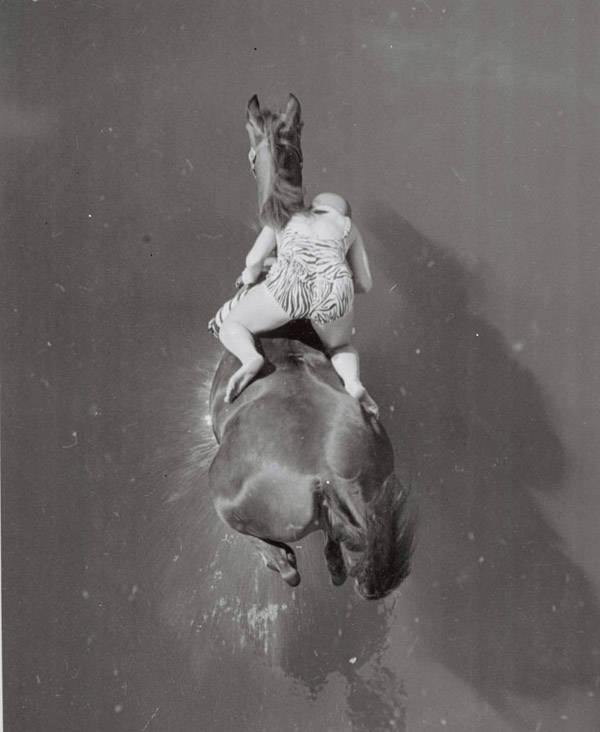 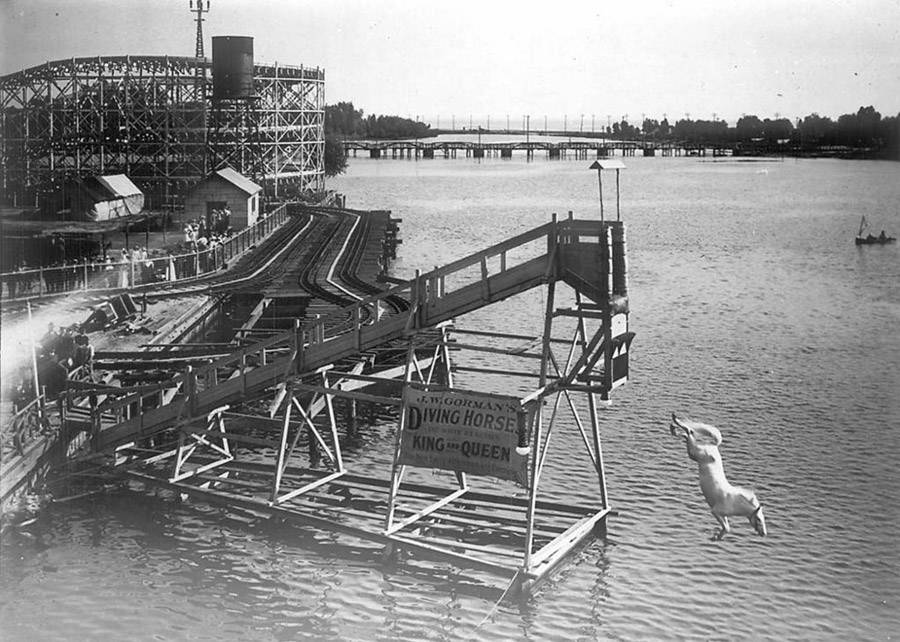 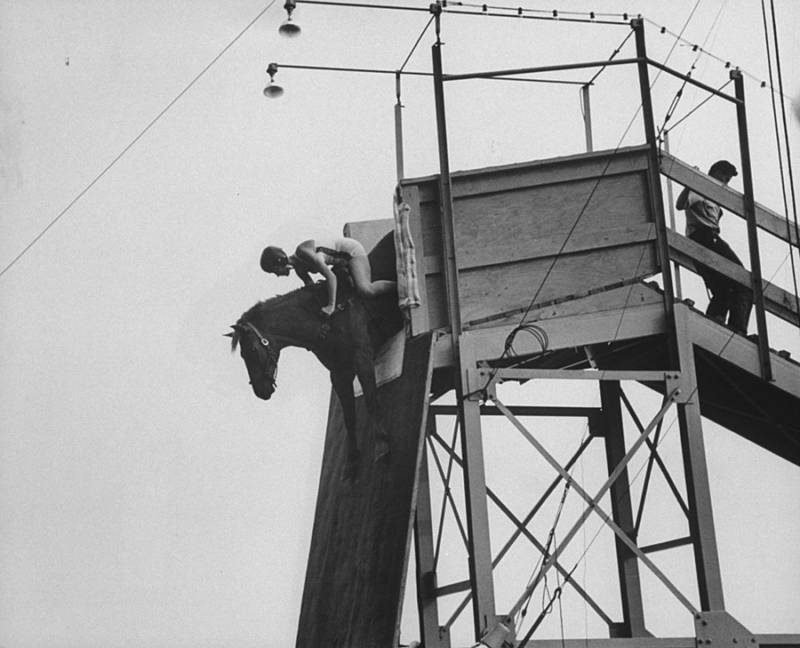 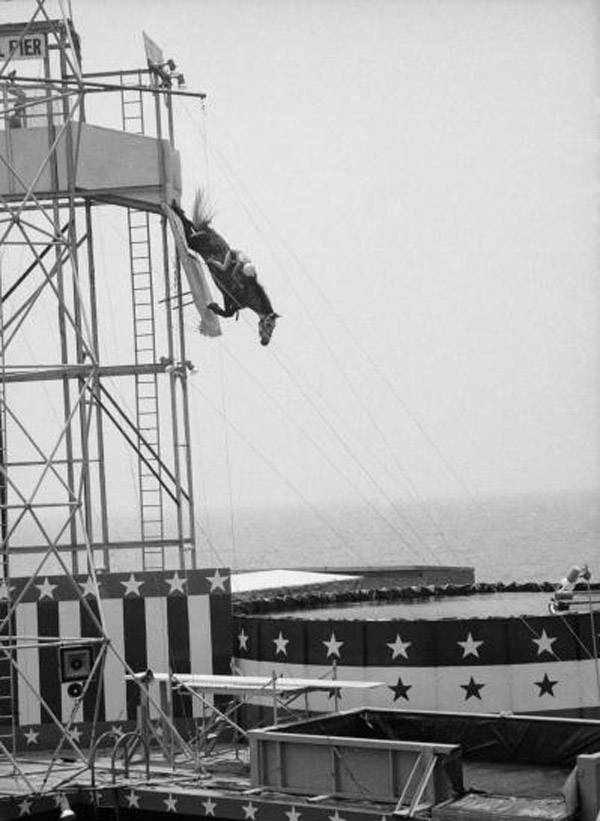 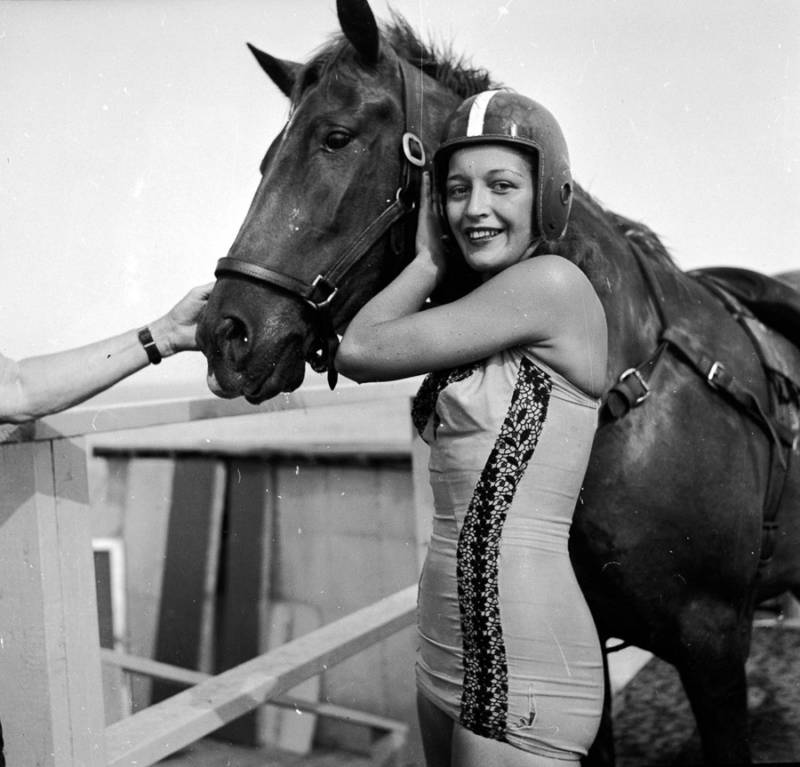 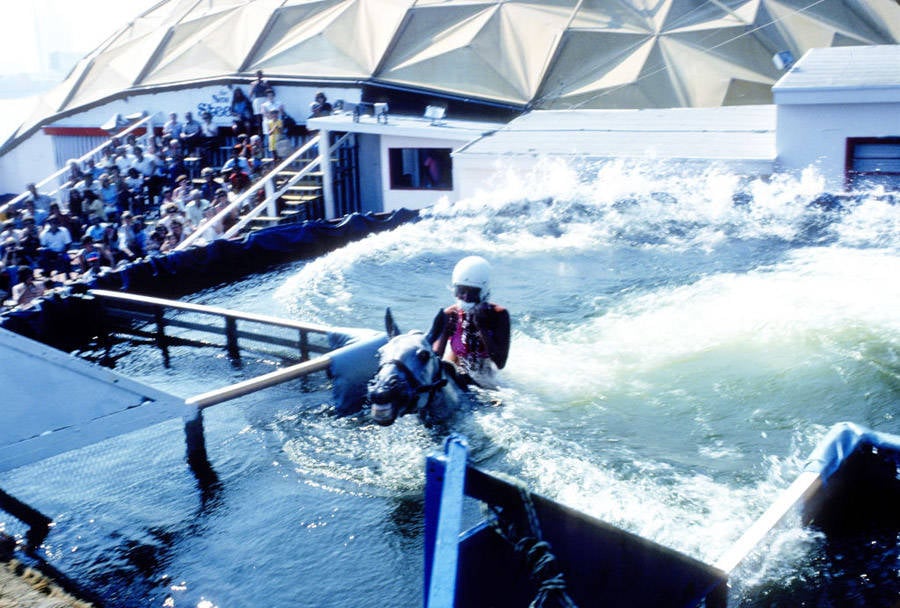 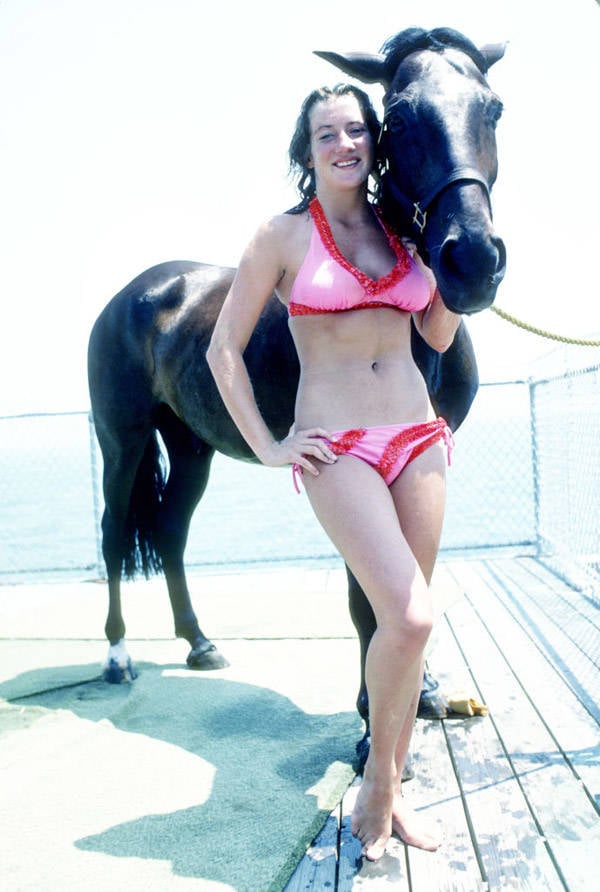 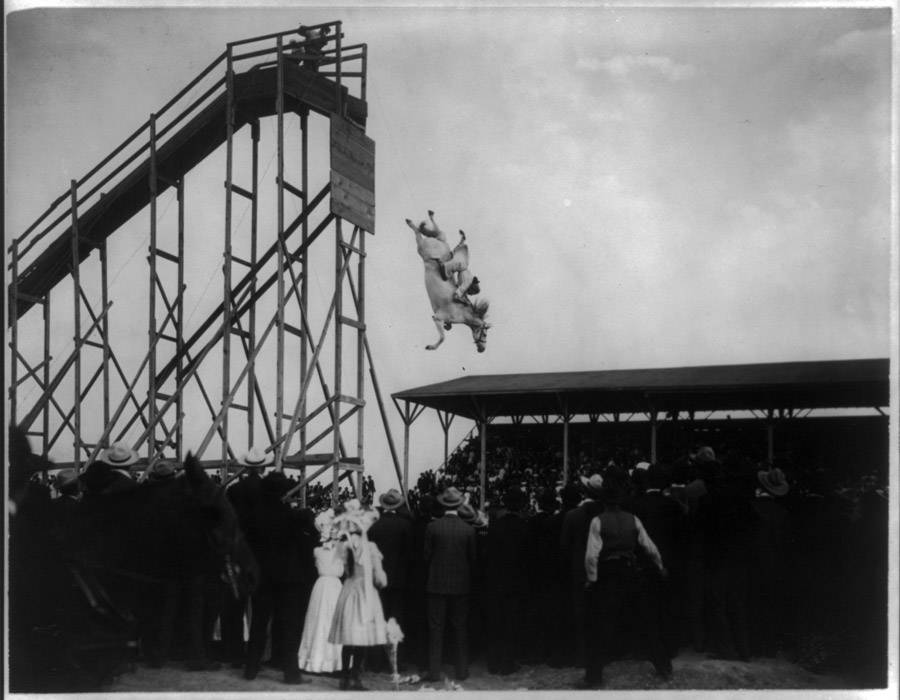 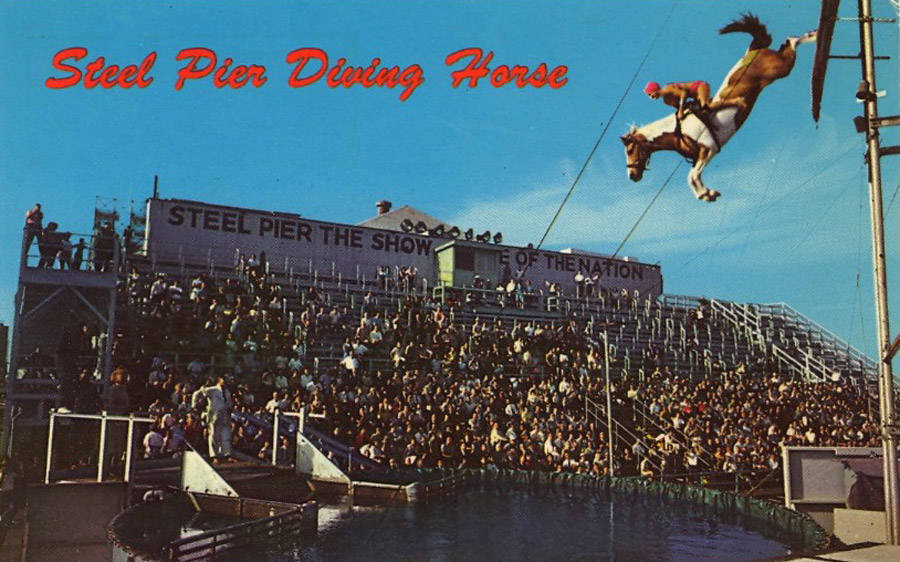 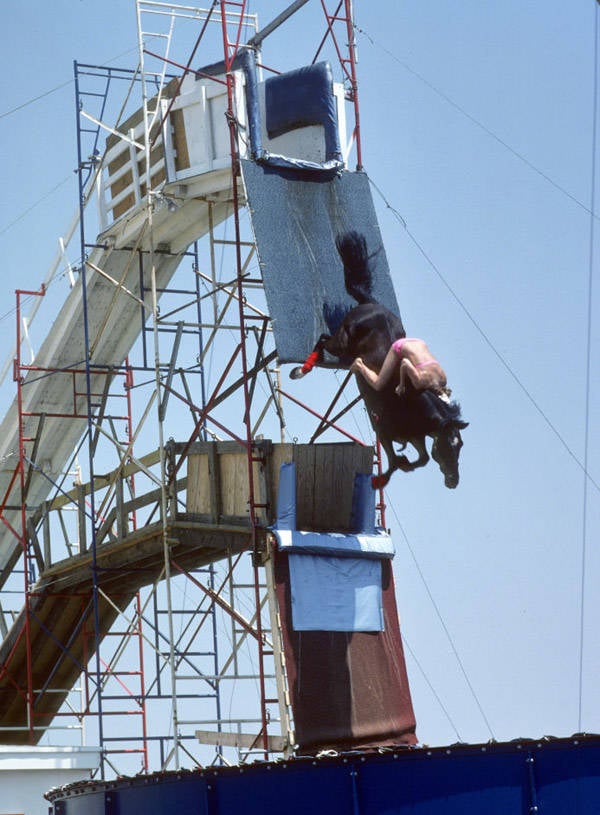 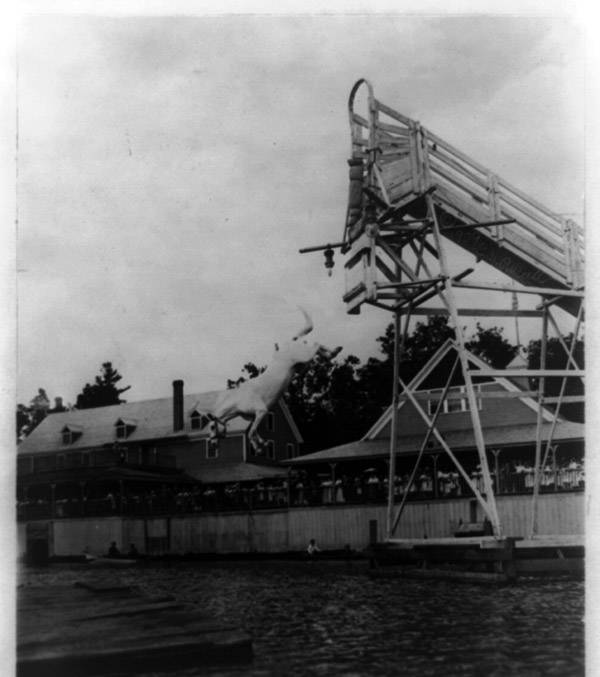 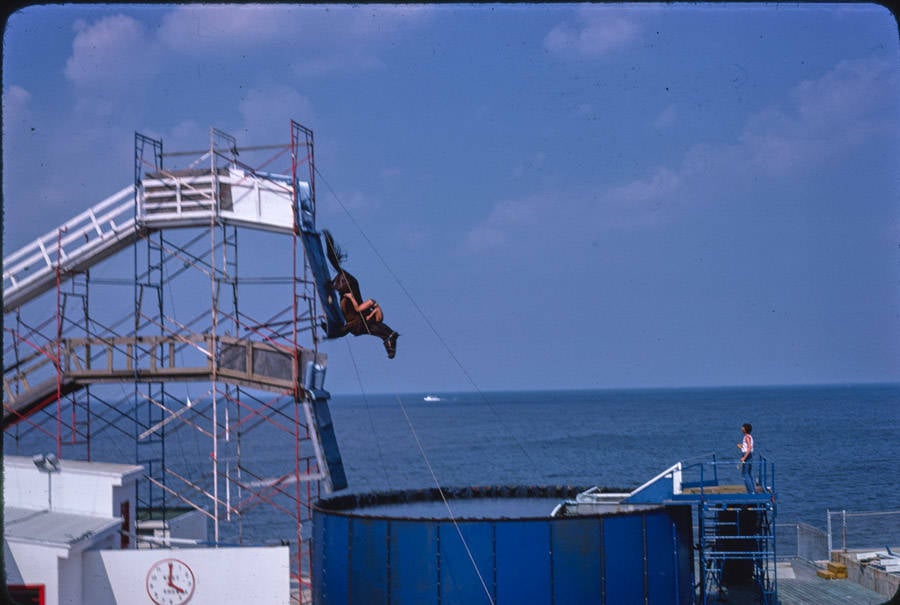 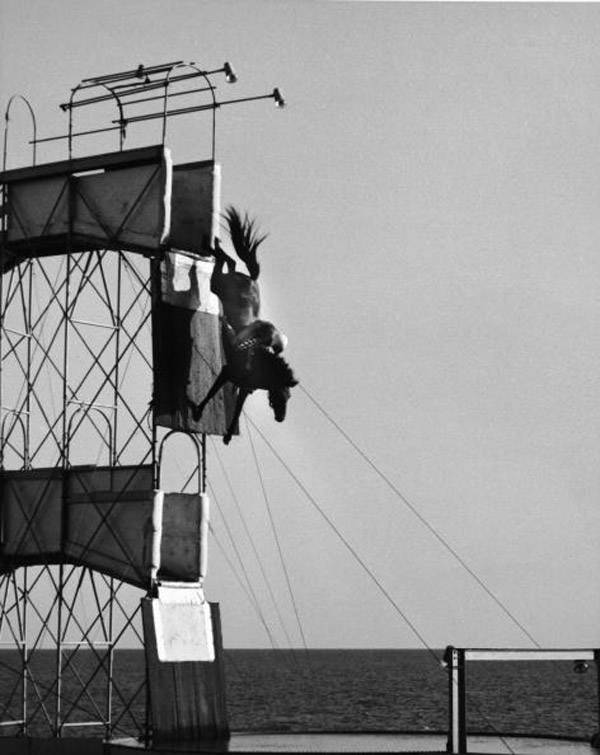 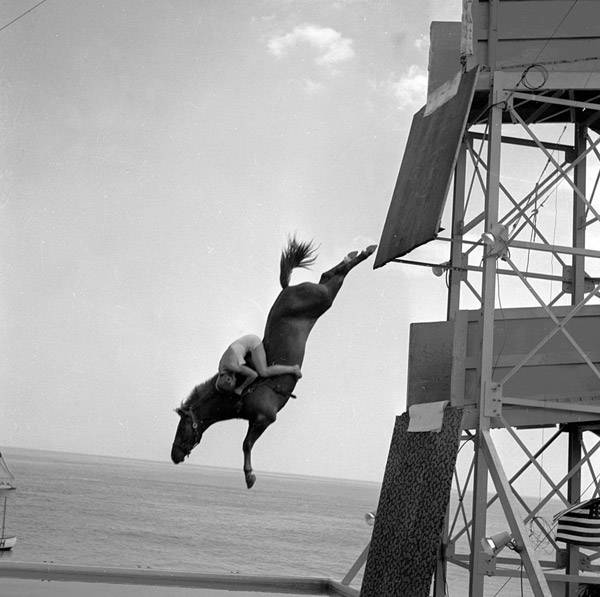 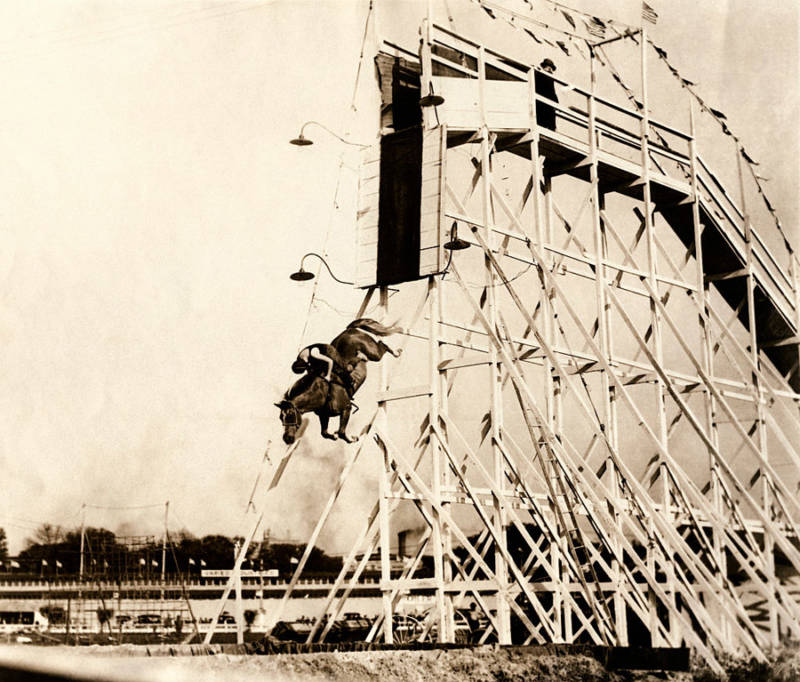 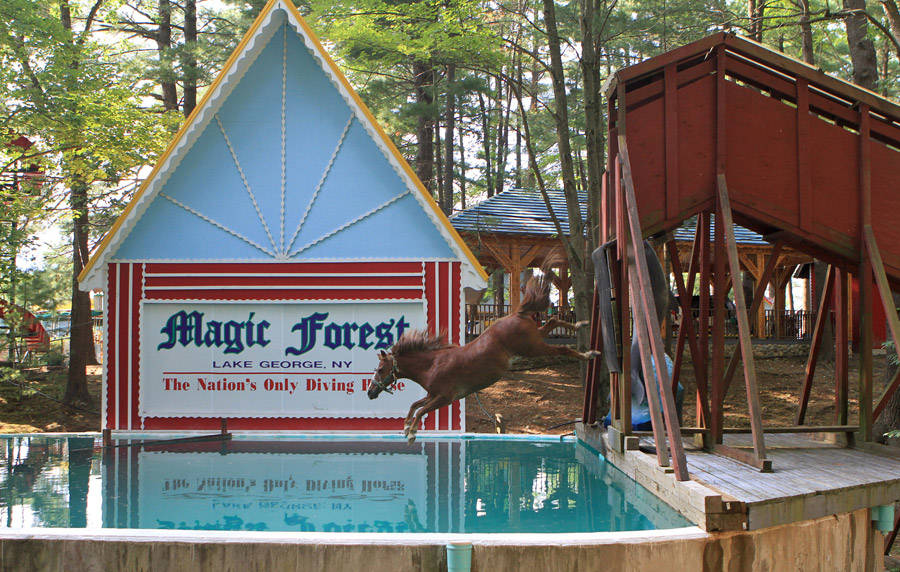 1 of 22
At the peak of horse diving, the spectacle attracted huge crowds to places like Atlantic City, where divers and horses would perform the death-defying jumps. Peter Stackpole/The LIFE Picture Collection/Getty Images
2 of 22
The towering diving platforms could sometimes be as high as 75-feet. Library of Congress
3 of 22
Training horses to dive was no easy feat of course.

They would sometimes perform the stunt six times a day at George Hamid's Steel Pier in Atlantic City, New Jersey. Bettmann/CORBIS/Getty Images
7 of 22
Diving horses were a popular attraction at the Hanlan's Point Amusement Park in Toronto, Canada. 1907William James/Wikimedia Commons
8 of 22
A rider leans forward as the horse extends its front legs in preparation to dive. Peter Stackpole/The LIFE Picture Collection/Getty Images
9 of 22
Horse and rider plunge towards the pool below in Atlantic City. 1969. Public Domain
10 of 22
Sonora Carter became one of Atlantic City's premier entertainers and started in the high-flying sport at just 15 years old.

She prided herself on never injuring a horse over the course of her career. Wikimedia Commons
11 of 22
A diver and horse exit the pool as the crowd looks on. 1977. PL Gould/IMAGES/Getty Images
12 of 22
A diver poses for a photo with her horse in Atlantic City, 1977. PL Gould/IMAGES/Getty Images
13 of 22
A large crowd of spectators watch Eunice Padfield and her horse dive from a high tower in Pueblo, Colorado on July 4, 1905.Public Domain
14 of 22
A postcard from the 1960s, showcasing the Steel Pier's popular diving horses attraction. Flickr/Sonya
15 of 22
Horse and diver descend head-first towards the water below. 1977. PL Gould/IMAGES/Getty Images
16 of 22
King the horse falls towards the water in this 1909 photo. G.H. Russell/Library of Congress
17 of 22
A horse takes a practice dive at Atlantic City's Steel Pier park. 1978. John Margolies/Library of Congress
18 of 22
A rider clings to their horse as the animal makes a near vertical drop into the diving pool. Circa 1940s. Frederic Lewis/Getty Images
19 of 22
A rider is seen hanging on for dear life as the horse plunges towards the pool below. 1955.Three Lions/Getty Images
20 of 22
Divers often trained with their horses for years, gradually moving up to higher and more challenging diving platforms. George Rinhart/Corbis via Getty Images
21 of 22
Lightning Wonder takes a dive at the the United States' only still operating horse diving exhibition in Lake George, New York. 2010. James Ambler/Barcroft USA/Getty Images
22 of 22 The idea of throwing oneself off a 70-foot diving platform is enough to keep most people firmly planted on the ground below. Throwing yourself off said platform while on the back of a horse is a stunt only for the truly daring and crazy.

That's exactly what some people did though in the early half of the 20th century in a sport known as diving horses. The peculiar sport that appealed only to the most extreme of thrill-seekers, involved climbing onto the back of a horse and then coaxing it to leap off a platform, plunging head-first into a diving pool far below.

Horse diving first emerged in the 1880s as an idea by William "Doc" Carver, a man better known for performing in Buffalo Bill Cody's Wild West Show as a sharpshooter than as an Olympic diver. Carver allegedly came up with the idea when crossing a bridge over Nebraska's Platte River. With Carver still on, the horse jumped off the bridge into the water below, inspiring the idea of diving horses.

While Carver himself didn't see a future participating in the sport, he trained horses and convinced his daughter to take up the practice.

The new sport would an audience on the boardwalks of popular tourist cities like Atlantic City, New Jersey, where crowds were eager for live entertainment. Sonora Carver, the wife of William Carver's son, Al, would become the sport's most famous diver, regularly performing at Atlantic City's Steel Pier in the 1920s and 1930s. She would eventually lose her vision from a diving accident, though her career would inspire a book and Disney movie, Wild Hearts Can't Be Broken.

While injuries did happen, it was more often the horse's rider who was at risk than the horse. Former diving horse rider Sarah Detwiler Hart, recalled just how much trust there needed to between rider and horse: "They went when they were ready... I wouldn't want to be on a horse that was agitated. My life depended on that horse doing that in a calm way, so there was no electrical devices or trap doors or anything like that during my time."

By the 1970s, diving horses had begun to lose its popularity with animal rights activists demanding an end to the practice. There was however, a small push to bring the diving horses back to Atlantic City in 2012, but it was quickly snuffed out by animal welfare advocates.

The only horse diving exhibition still in operation today is located in Lake George, New York.

To see what diving horses looked like back in 1923, view the video below:

Now that you've seen diving horses entertain the masses of the past, take a look at how miniature horses are changing lives for the better in the present. Of course, horses aren't the only animals with a history in show business, check out these vintage photos from the golden days of the circus.