These are the little-known yet unforgettable moments that make up New York City history's weird side. 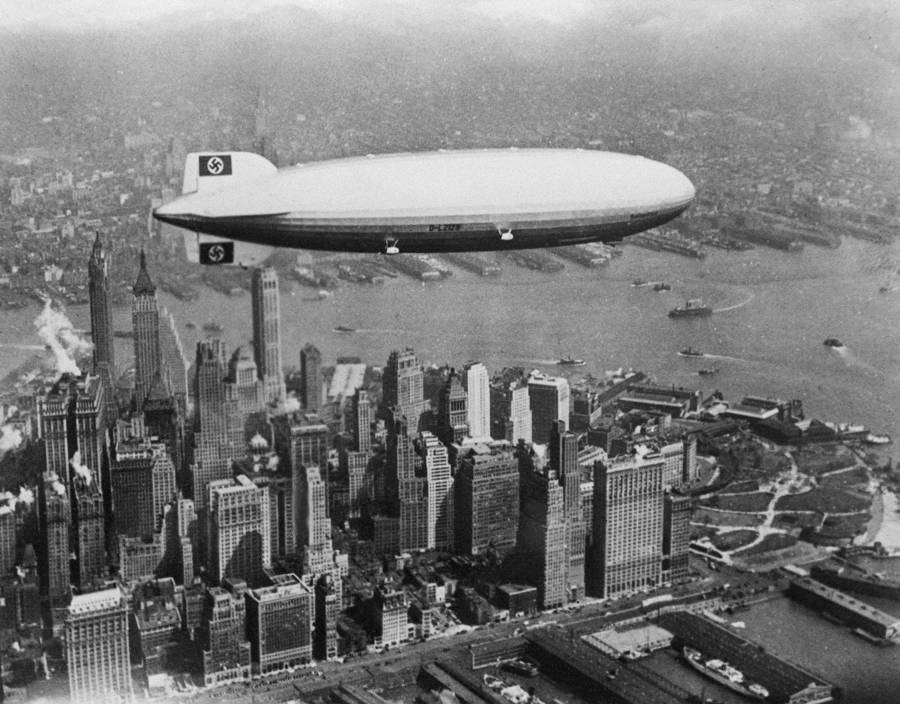 The German airship Hindenburg, swastikas and all, flies over New York City on the afternoon of May 6, 1937, a few hours before its historic, fiery crash in Manchester Township, New Jersey.AFP/AFP/Getty Images 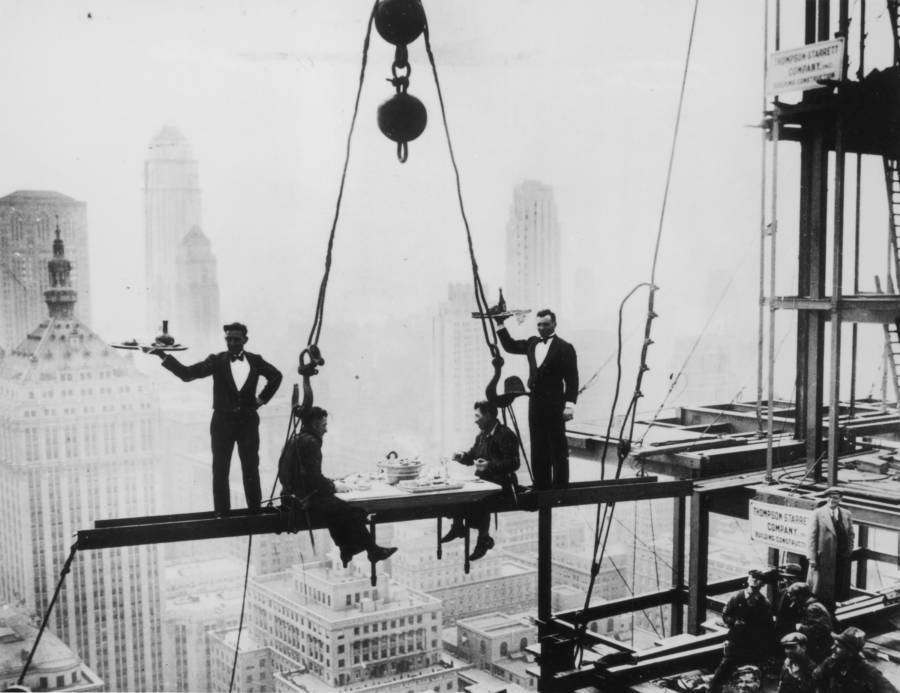 Waiters serve lunch to two steel workers on a girder high above the city on November 14, 1930, during construction of the famed Waldorf-Astoria Hotel.Keystone/Getty Images 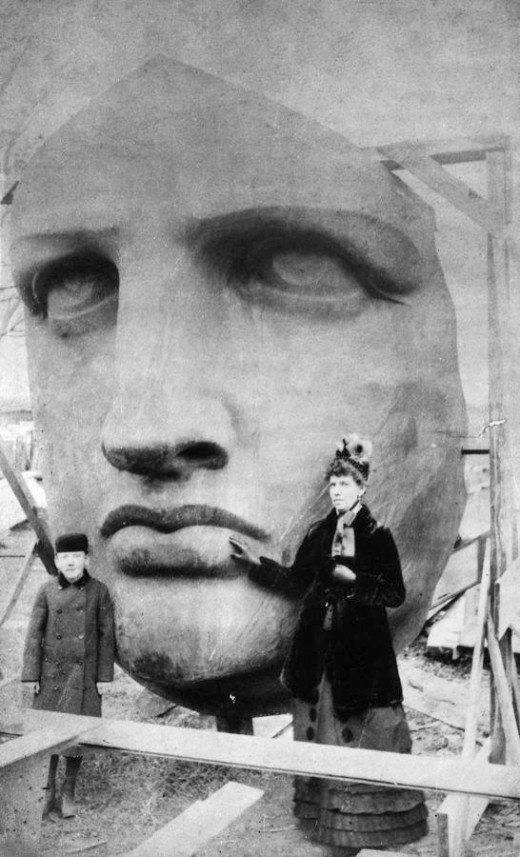 The as-yet unassembled face of the Statue of Liberty sits unpacked in New York soon after its delivery from France on June 17, 1885.Wikimedia Commons 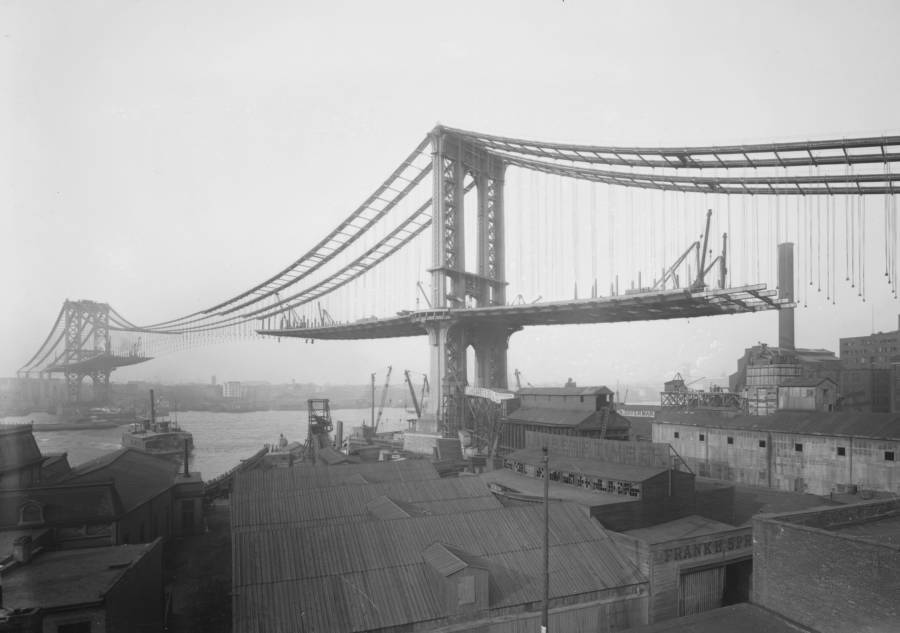 The Manhattan Bridge during construction in 1882.Buyenlarge/Getty Images 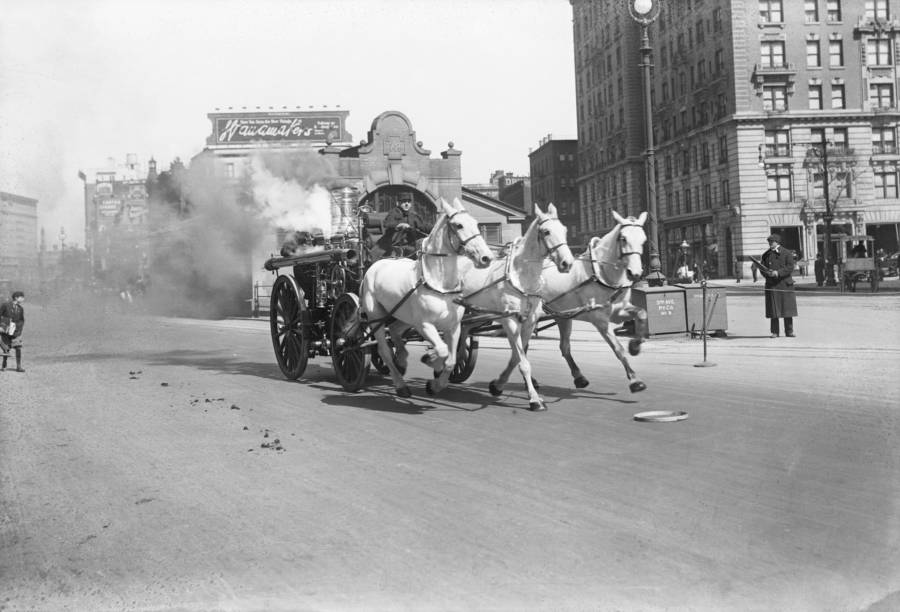 A horse-drawn fire engine at 72nd Street and Broadway races toward a fire. Circa 1910.Bettmann/Contributor/Getty Images 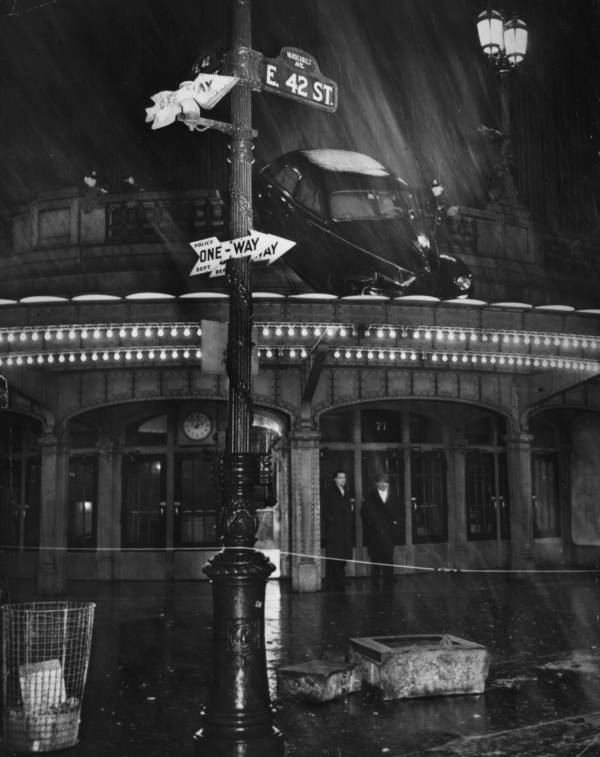 A car sits on the roof of Grand Central Station following an accident in which a car crashed through the barrier of Park Avenue and ploughed into the roof below, on the corner of 42nd Street and Vanderbilt Avenue. 1944.Weegee (Arthur Fellig)/International Center of Photography/Getty Images 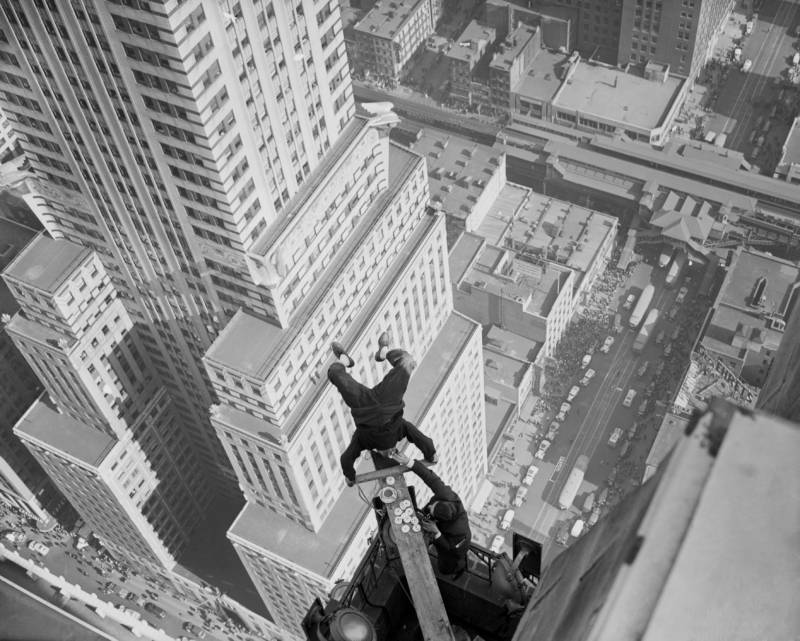 From a board stuck out from the 54th floor of the Chanin Building, daredevil pole sitter Alvin "Shipwreck" Kelly balances on his head while dunking doughnuts to celebrate Friday the 13. 1939.Bettmann/Getty Images 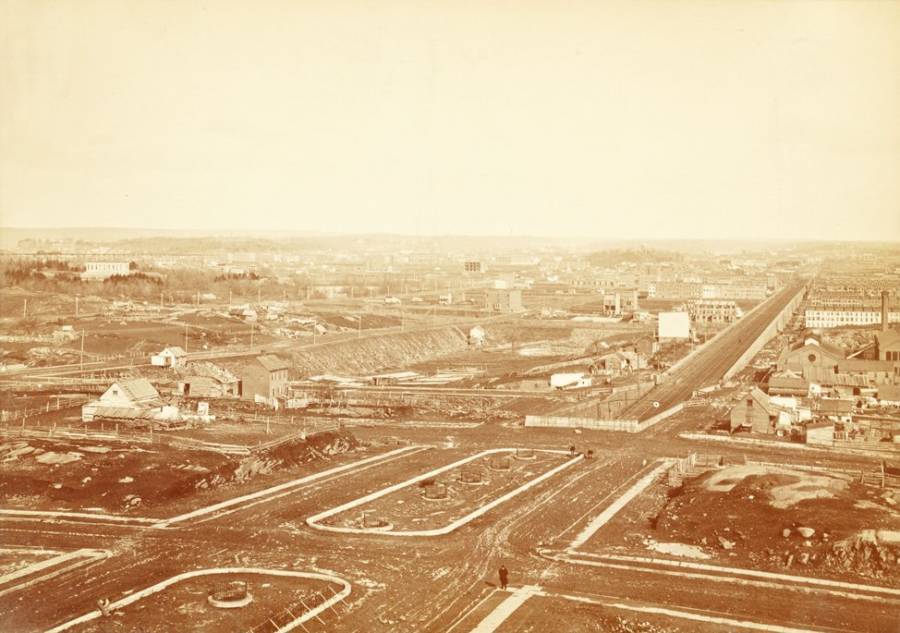 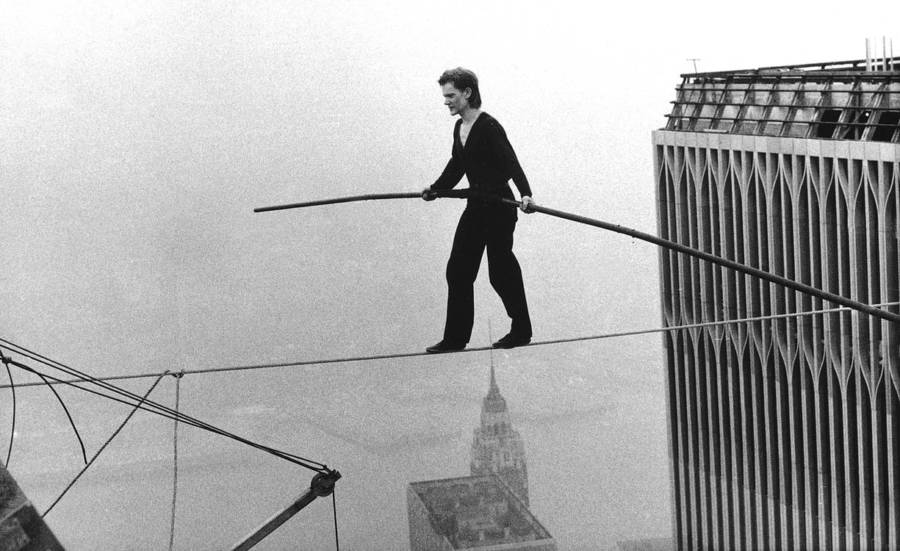 French aerialist Philippe Petit walks a tightrope strung between the tops of the Twin Towers of the World Trade Center. 1974.Alan Welner/AP 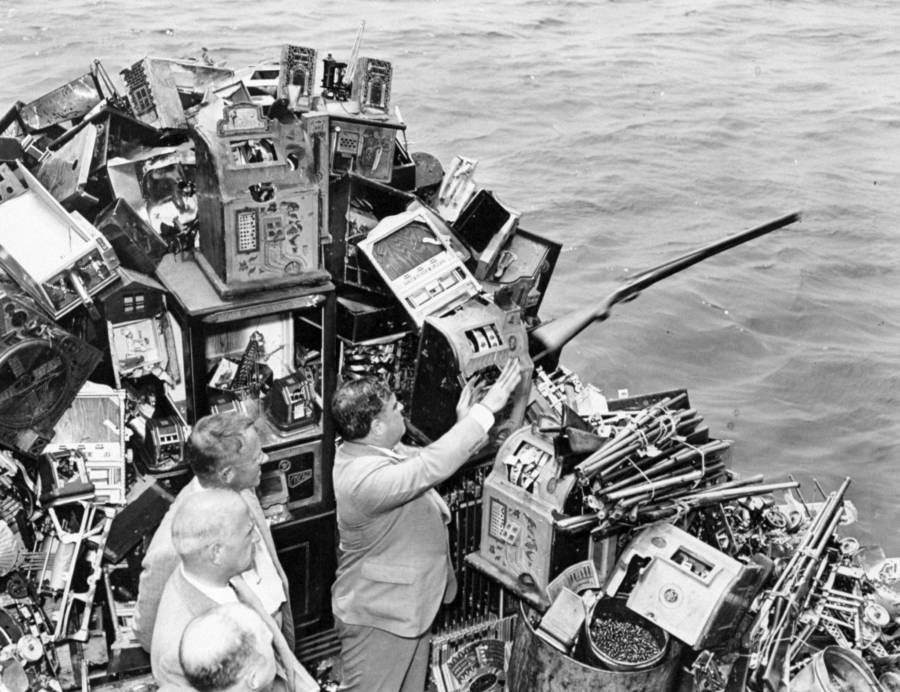 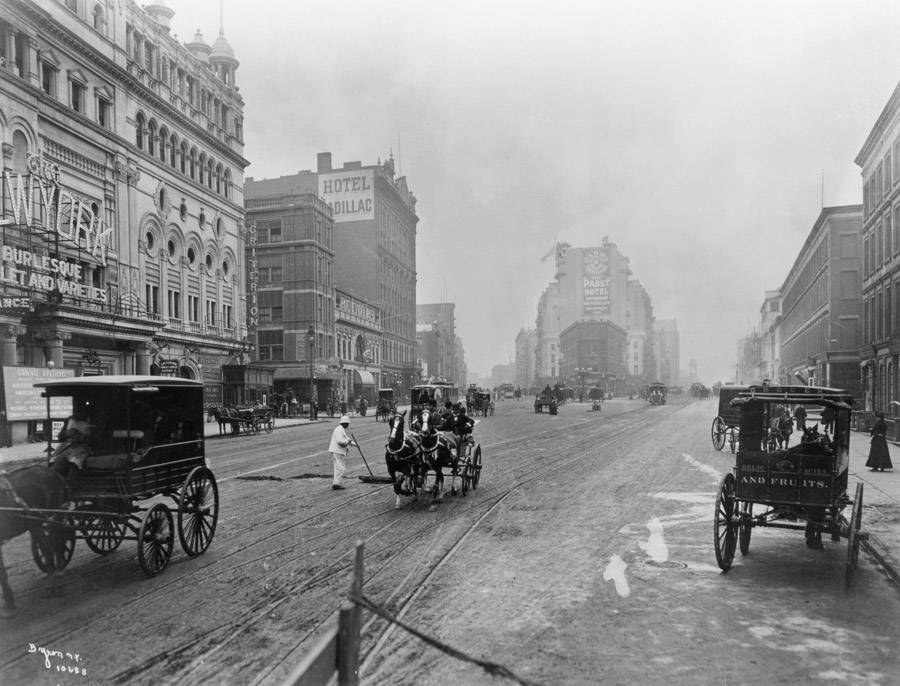 Longacre Square, not long before it became "Times Square." Circa 1900. Bettmann/Getty Images 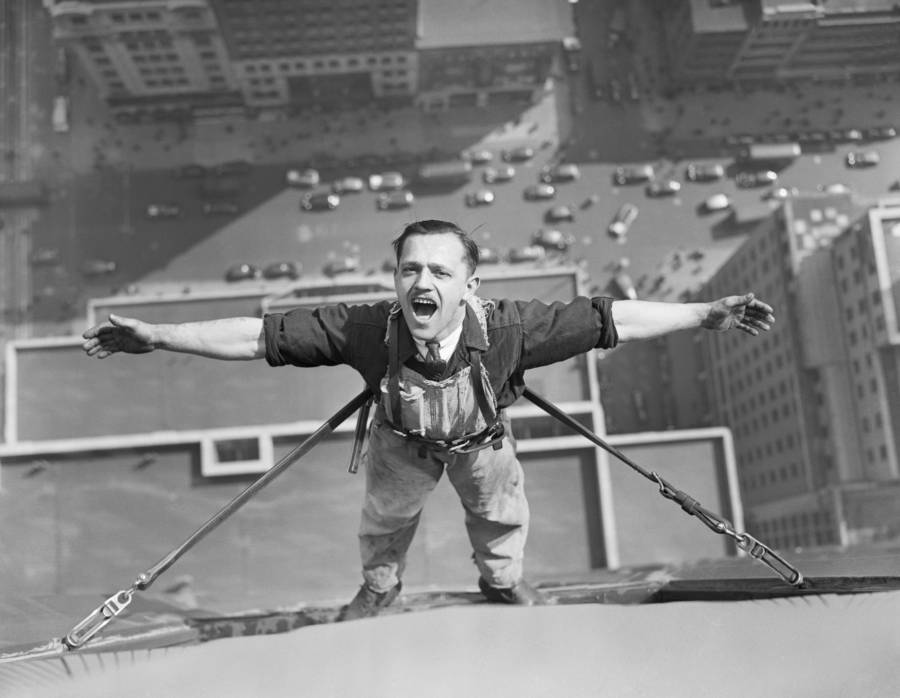 A window washer at work on the Empire State Building poses during a brief break from his duties. March 24, 1936.Bettmann/Contributor/Getty Images 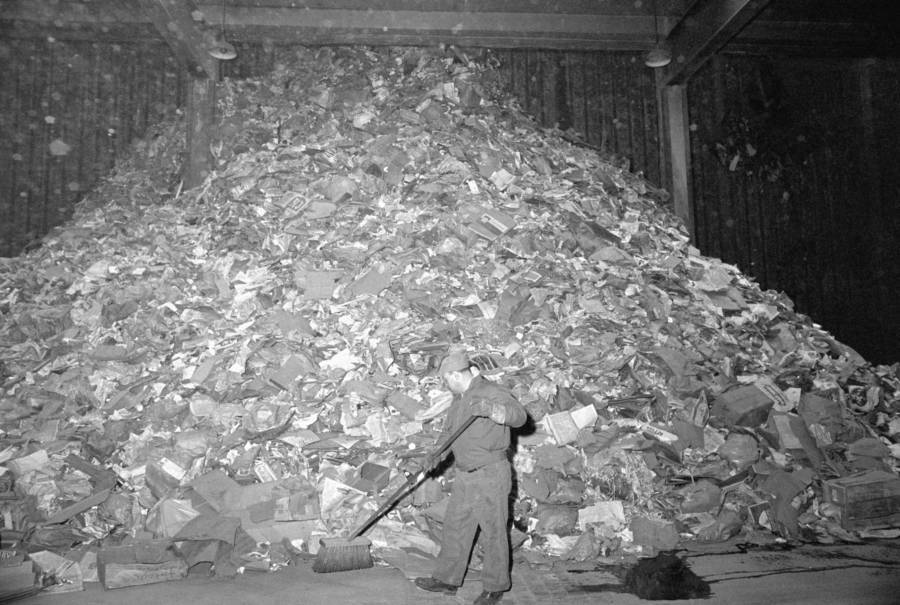 A sanitation worker attempts to manage a mountain of garbage, which had accumulated during a citywide garbage strike. 1968.Bettmann/Getty Images 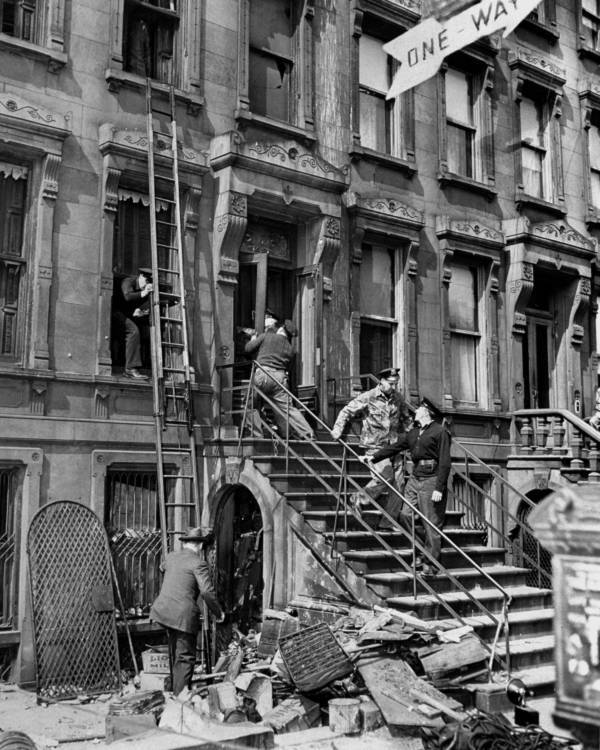 Police attempt to enter the residence of the Collyer Brothers, a pair of legendary New York hoarders and recluses, after receiving reports of a foul smell coming from the house. They later found the bodies of the two brothers dead under a mountain of rubbish. 1947.Charles Hoff/NY Daily News via Getty Images 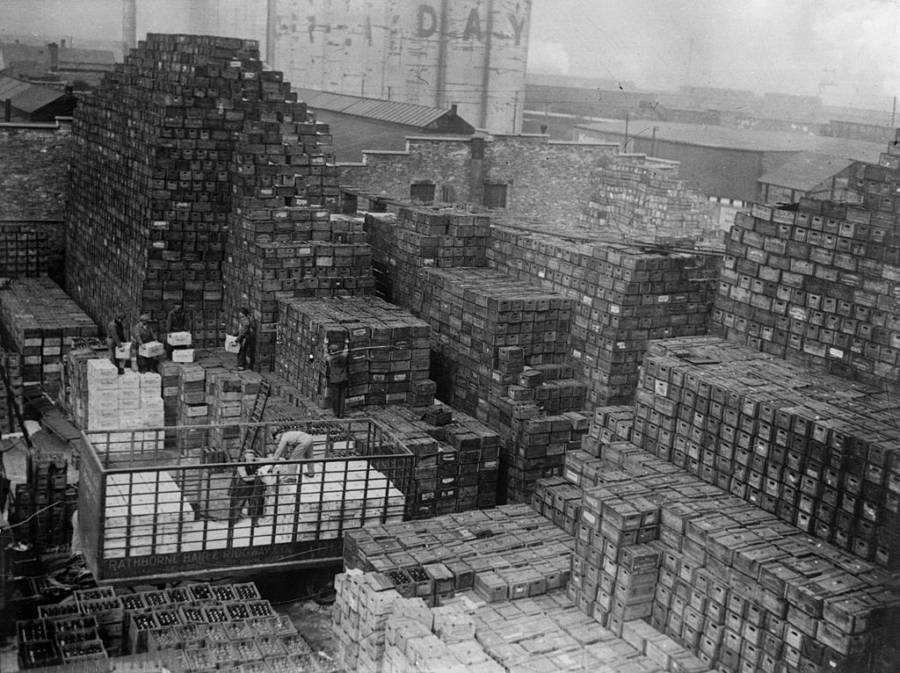 Workers at a brewery unload thousands of crates of beer, getting ready for the end of Prohibition. April, 1933.Keystone/Getty Images 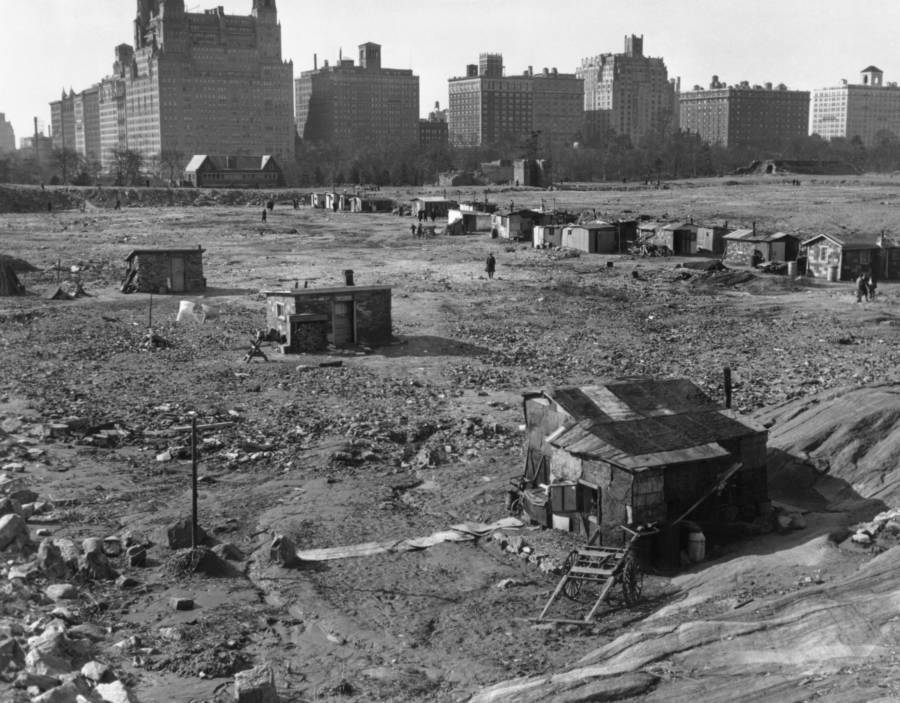 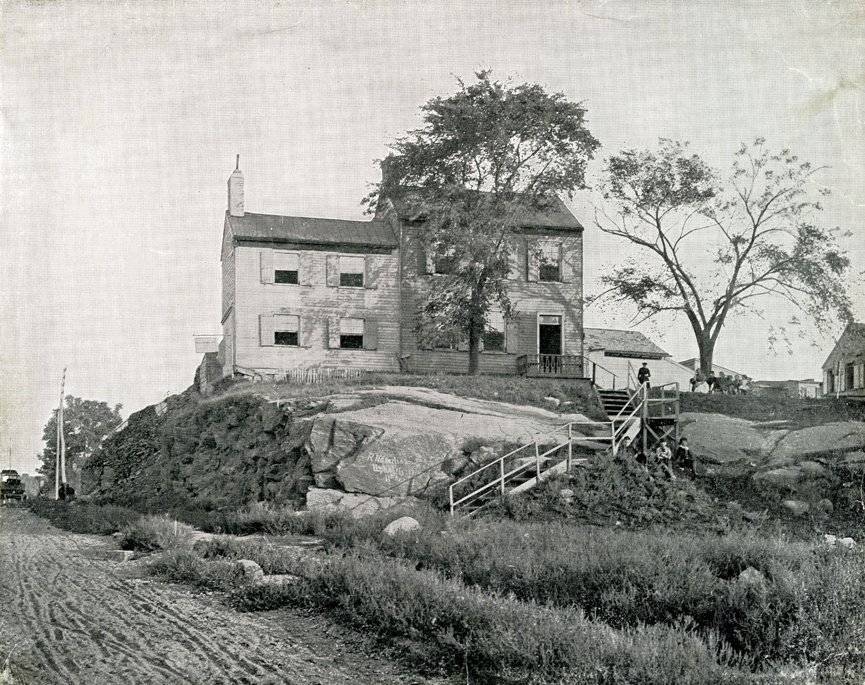 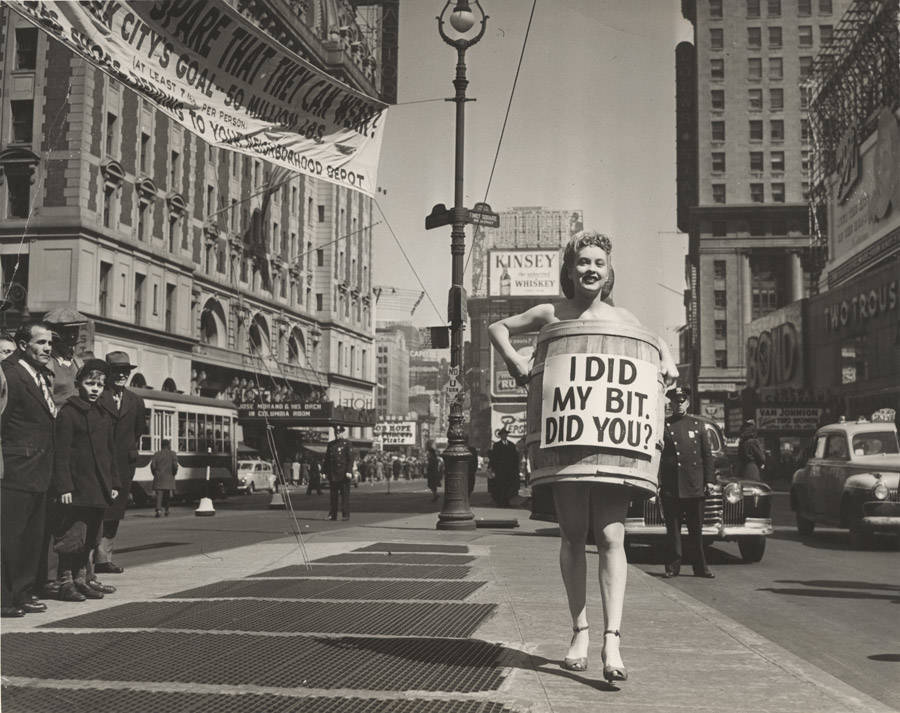 A woman dressed in only heels and a barrel that reads "I Did My Bit, Did You?" stands in Times Square.

The promotion, organized by the United National Clothing Collection was part of drive to collect clothing and bedding for overseas war relief. April 1945.Weegee(Arthur Fellig)/International Center of Photography/Getty Images 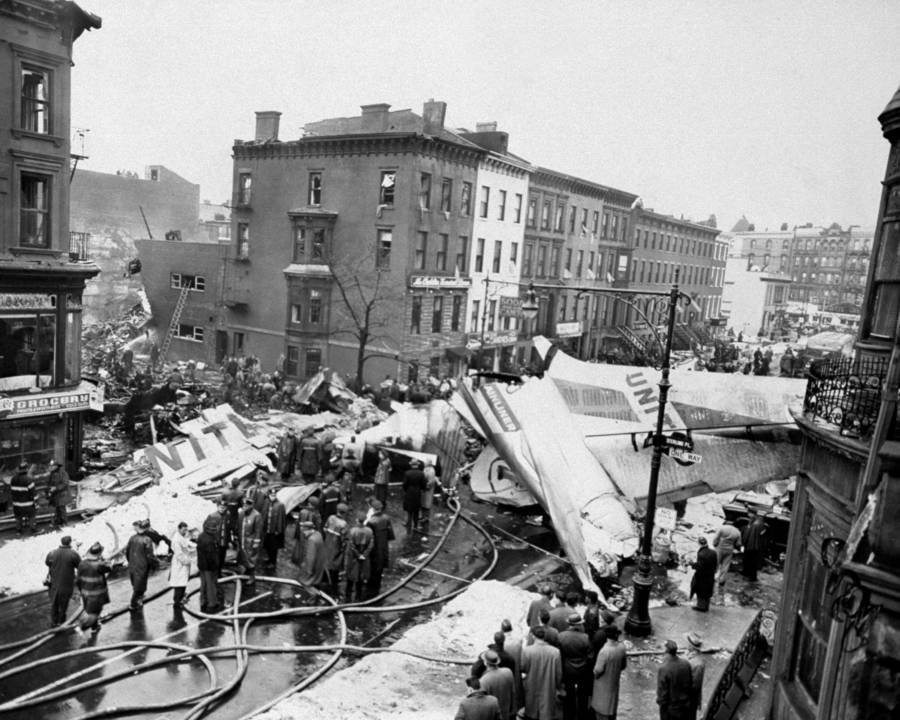 The scene in the Park Slope neighborhood of Brooklyn after two airplanes crashed to the ground. The planes had collided over foggy New York harbor on December 16, 1960.Paul Bernius/NY Daily News/Getty Images 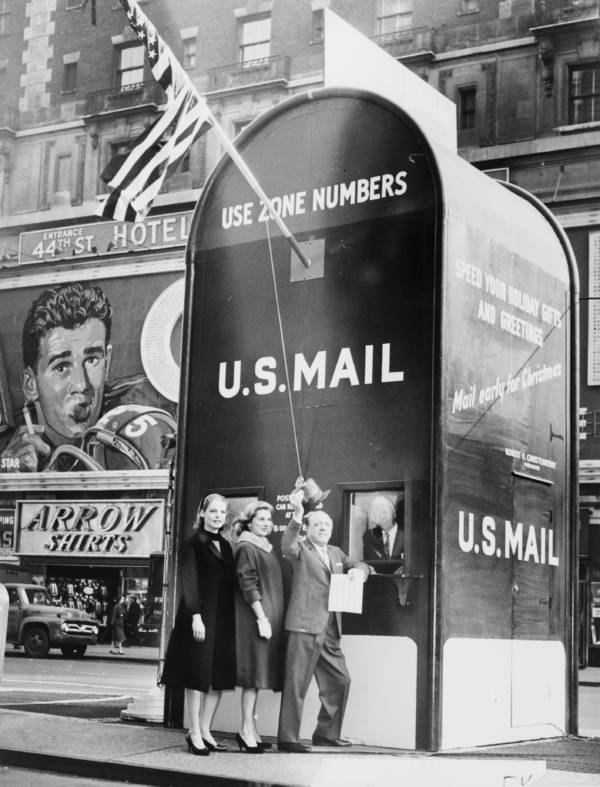 New York residents stand outside a giant mailbox stamp-selling booth in Times Square, while the Assistant Postmaster dispenses stamps from inside the booth. 1961.Wikimedia Commons 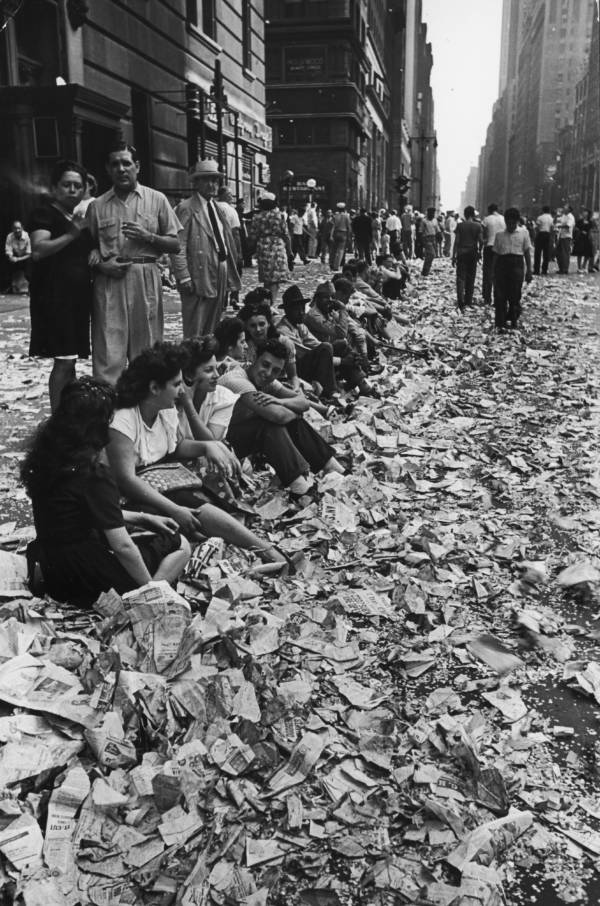 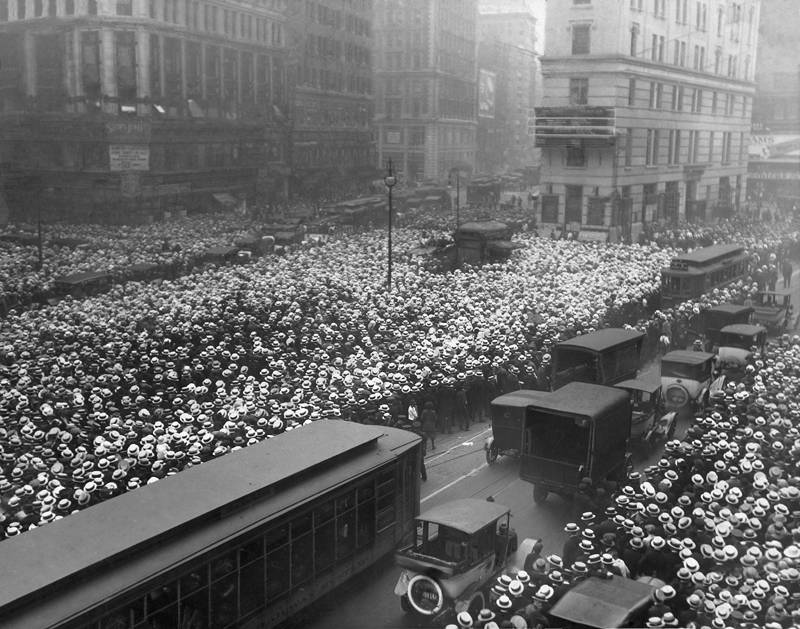 In July 1921, a crowd reportedly consisting of approximately 10,000 men gather outside the New York Times building in Times Square in order to receive updates on the boxing match between Jack Dempsey and Georges Carpentier.Wikimedia Commons 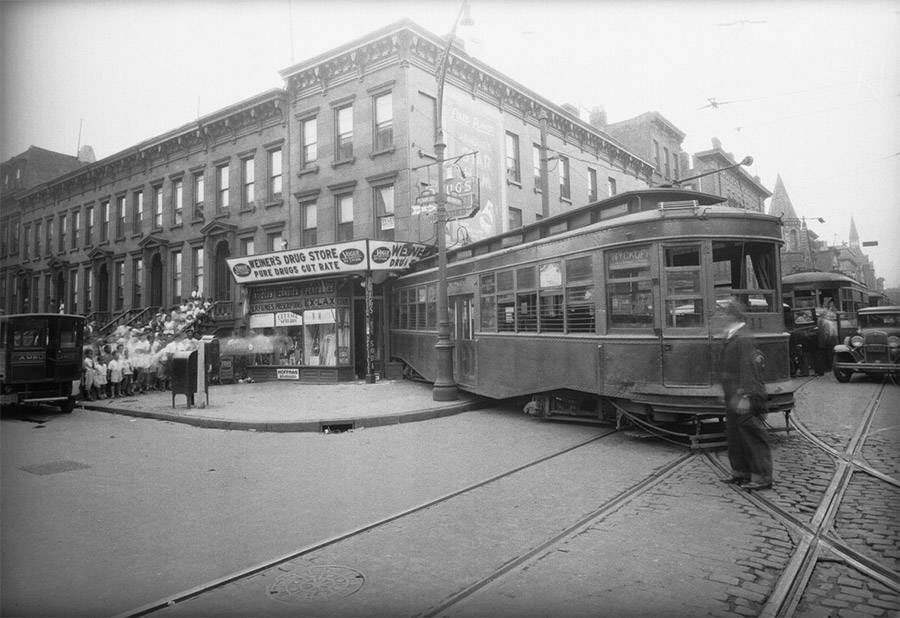 A streetcar lies motionless just after having jumped the tracks and crashed into a store at the intersection of Nostrand and Putnam Avenues. July 1931.NYC Municipal Archives 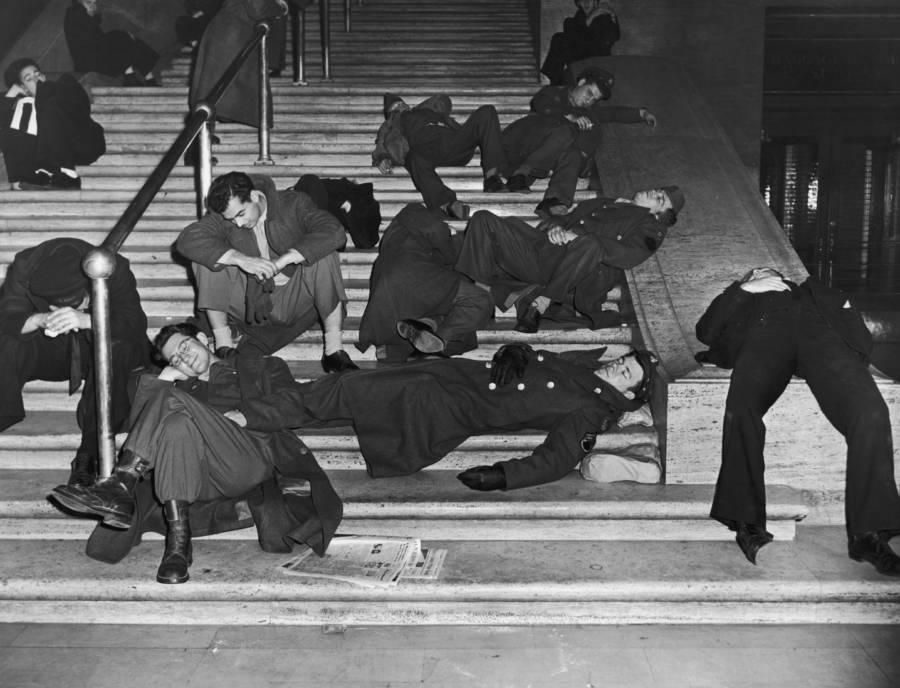 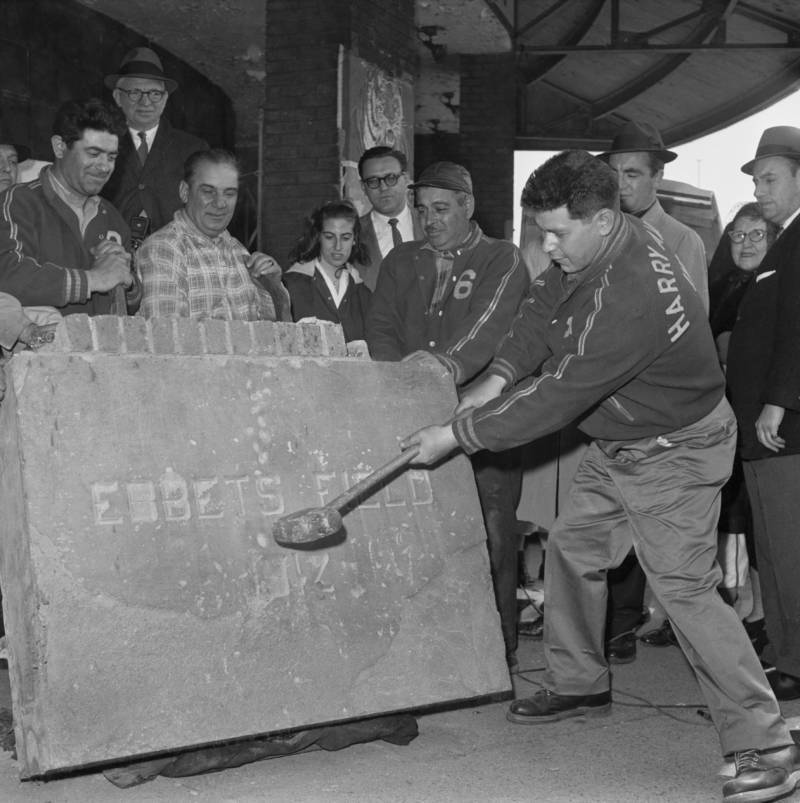 A Brooklyn youth swings a sledgehammer at the concrete cornerstone of Ebbets Field during an auction sale on the old stomping grounds of the Brooklyn Dodgers. Balls, bats, bases, and other diamond bric-a-brac were sold at the auction. The stadium had recently been torn down to make way for a middle-income housing project. 1960.Bettmann/Getty Images 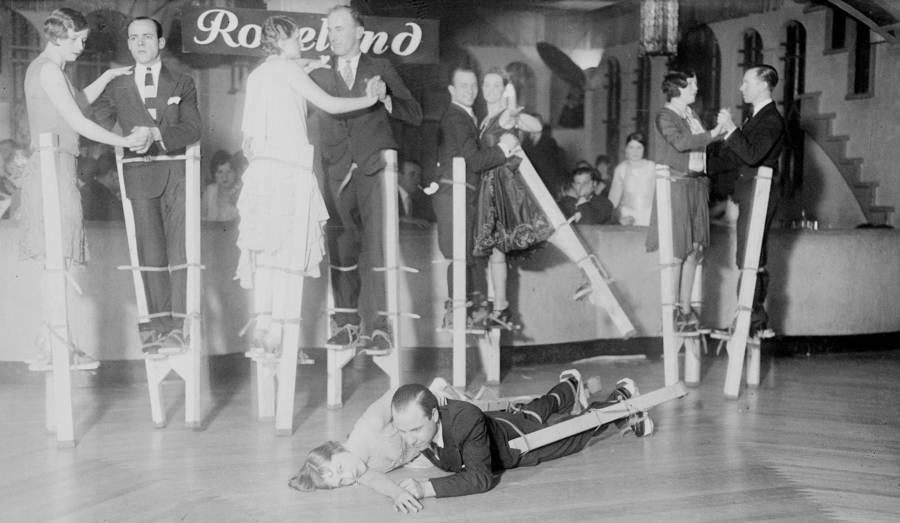 The New York City ballroom holds a stilt-dancing marathon. Due to the falling of some participants, the Roseland Ballroom owners called a halt to this contest after four hours. February 6, 1922.NY Daily News Archive/Getty Images 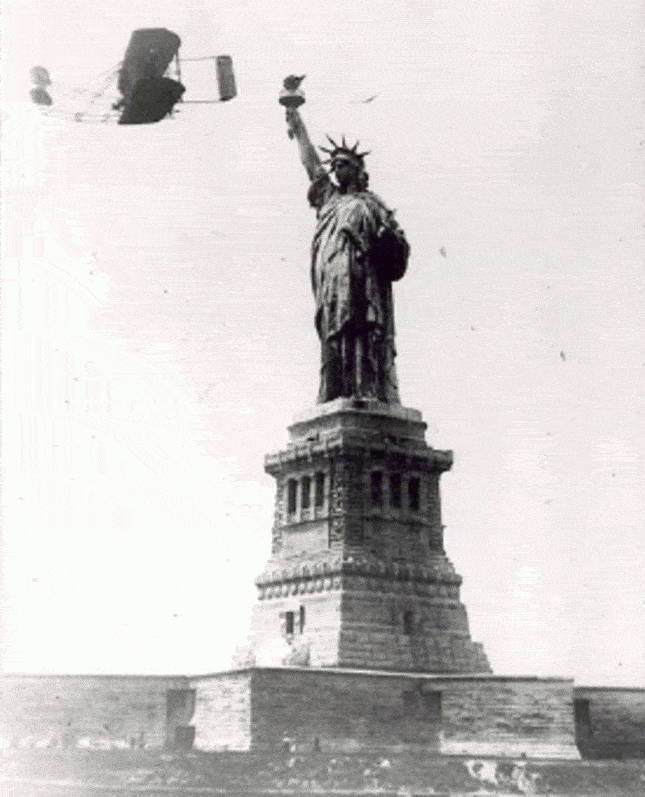 Wilbur Wright, of Wright brothers fame, flies a Wright Type A plane by the Statue of Liberty as part of a demonstration. 1909.Wikimedia Commons

From the draft riots of 1863 to the stock market crash of 1929 to the terrorist attacks of September 11, 2001, New York City has played host to many of American history's most notable moments.

But aside from such momentous events, the city has been the site of countless historical episodes that are less well-known yet completely unforgettable — the man who walked a tightrope between the Twin Towers, the brothers who entombed themselves in a maze of trash, and on and on.

Even less well-known still are the tiny little moments that reveal some of the strange little happenings that make New York the unique, ever surprising city that it's always been.

See some of the strangest and most unexpected vintage photos of New York City in the gallery above.

Enjoy these weird pictures of New York City? Next, check out these incredible photos of the undeveloped New York City before it became the modern metropolis we know today. Then, see the terrifying crime and decay of New York in the 1970s.