The U.S. Department of Agriculture currently believes this bizarre phenomenon is part of a "brushing scam," while officials continue to investigate. 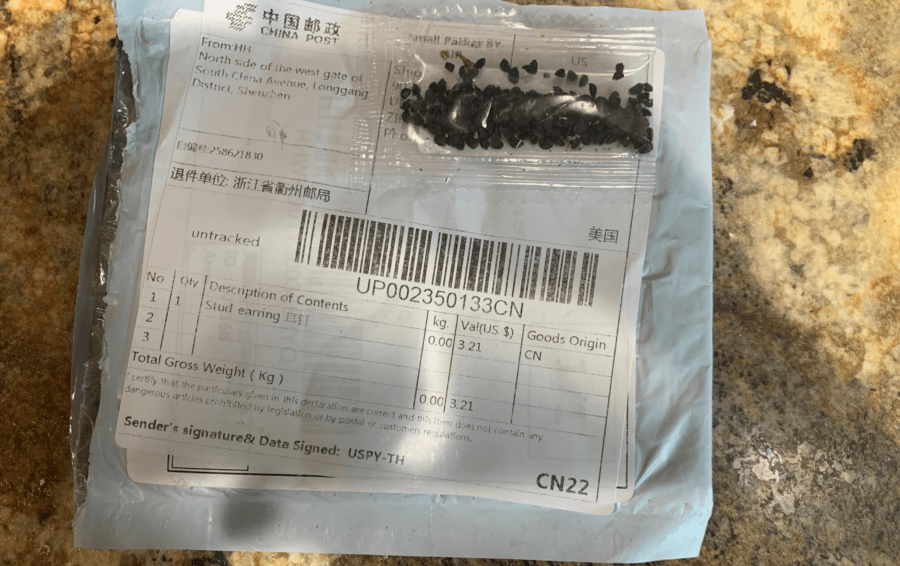 In cities across the United States, people have found unsolicited packages in their mailboxes containing mysterious seeds from China and Kyrgyzstan. According to ABC News, agriculture officials in at least 15 states have warned residents not to plant them — as nobody knows yet what they are.

The packaging is rather easily identifiable. The thin gray bags are typically adorned with shipping labels from Suzhou, a Chinese city west of Shanghai. While they describe the contents as varying jewelry, confused find a clear bag of seeds upon opening the packages.

State and federal agencies, the U.S. Department of Homeland Security (DOH), and Department of Agriculture (USDA) are now actively investigating the bizarre matter. While the motivation behind it remains a mystery, the USDA stated firmly: “Do not plant seeds from unknown origins.”

An ABC News segment on the bizarre shipments emanating from China and Kyrgyzstan.

As of Sunday, residents in cities including St. Paul, Philadelphia, Nashville, Cincinnati, Tampa, and Minneapolis have reported receiving these packages. According to KARE 11, people in states including Louisiana, Utah, Virginia, and Washington, have, as well.

Some of the packages have a return address of Kyrgyzstan and include instructions on how to plant the seeds typed out in English.

“At this time, we don’t have any evidence indicating this is something other than a ‘brushing scam’ where people receive unsolicited items from a seller who then posts false customer reviews to boost sales,” USDA official said.

The primary concern at this juncture is discerning whether or not these packages contain anything agriculturally or environmentally harmful. Officials have already begun collecting the unspecified amount of packages to do so, with Chinese authorities weighing in to quell any fears of complicity. 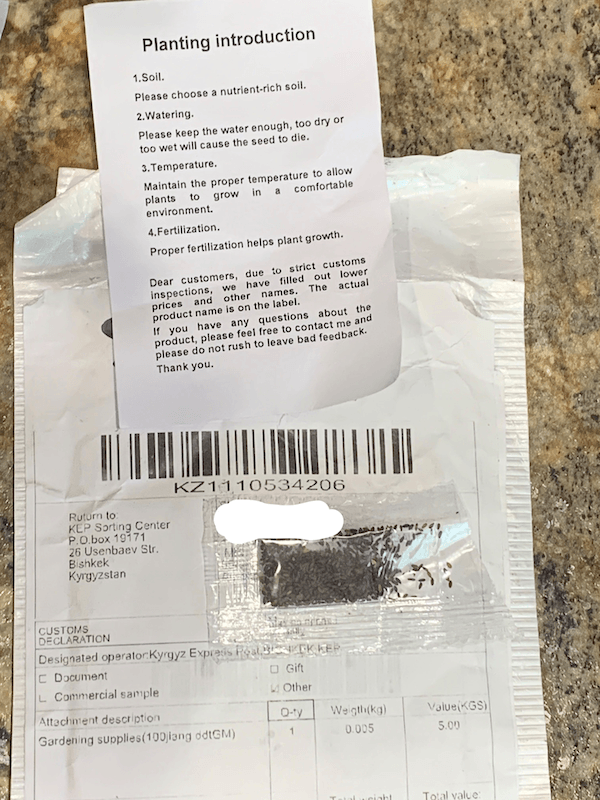 Spokesperson for China’s Ministry of Foreign Affairs, Wang Wenbin, confirmed on Tuesday that the labels were forged. He explained that the Universal Postal Union “strictly” prohibits sending or receiving seeds through the mail, as a stringent policy matter.

“After confirming with China Post, the China Post face-to-face slips on this batch of mails are forged, and there are many errors in the layout of the face-to-face slips and information items,” said Wenbin. “China Post has negotiated with U.S. Post to return these fake mails to China for investigation.”

As it stands, the USDA has urged anyone who has received a package like this to contact their state’s plant regulatory official as soon as possible. Alternatively, residents can notify the plant health director of their state’s Animal and Plant Health Inspection Service (APHIS).

“Please hold onto the seeds and packaging, including the mailing label, until someone from your state department of agriculture or APHIS contacts you with further instructions,” officials said.

After learning about agriculture officials warning residents in 15 U.S. states not to plant the mysterious Chinese seeds they’ve gotten in the mail, read about the Amazon driver who left more than a package at a customer’s house. Then, learn about the deadly nightshade — the beautiful plant that can kill you.