The bite of a blue-ringed octopus is one of the deadliest in the world — and it comes in a squishy package.

The tiny blue-ringed octopus packs a lethal punch. One of the deadliest animals in the world, this little cephalopod doesn’t have razor-sharp teeth or even the ability to travel particularly fast. But it does produce a neurotoxin with the power to paralyze — or kill.

When threatened, rings of electric blue flare along the body of this seemingly harmless mollusk. That means run. The creature is preparing to release a strong dose of tetrodotoxin through its salivary glands. 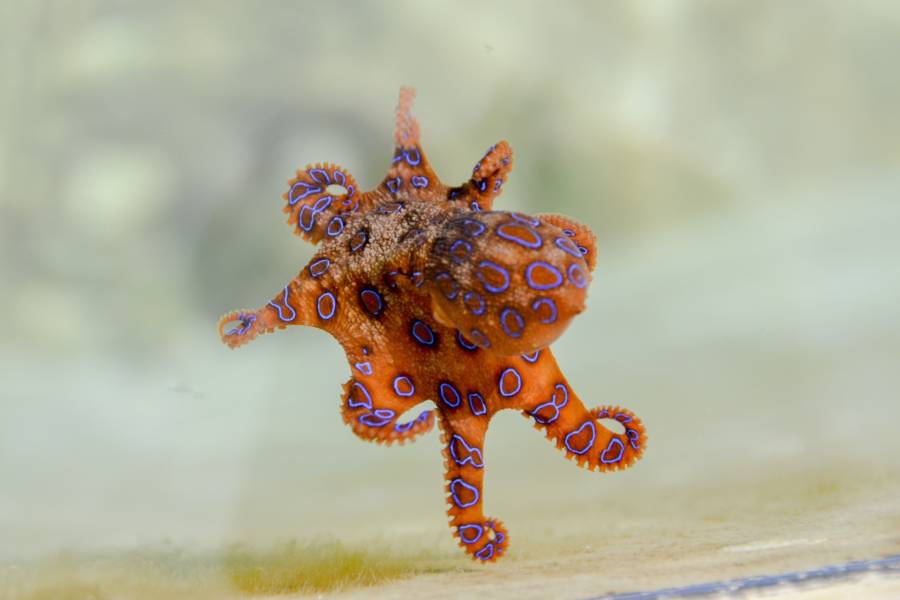 PixabayA single blue-ringed octopus bite can cause paralysis and death.

Tetrodotoxin is 1,000 times more deadly than cyanide, and the octopus has enough to kill 26 people — or at least paralyze someone for up to 24 hours. And, no, there is no known antidote. Anyone bitten by the blue-ringed octopus had better cross their fingers (while they still can) and seek medical assistance.

But the blue-ringed octopus’s venom is only one of its fascinating characteristics.

How The Blue-Ringed Octopus Lives And Hunts 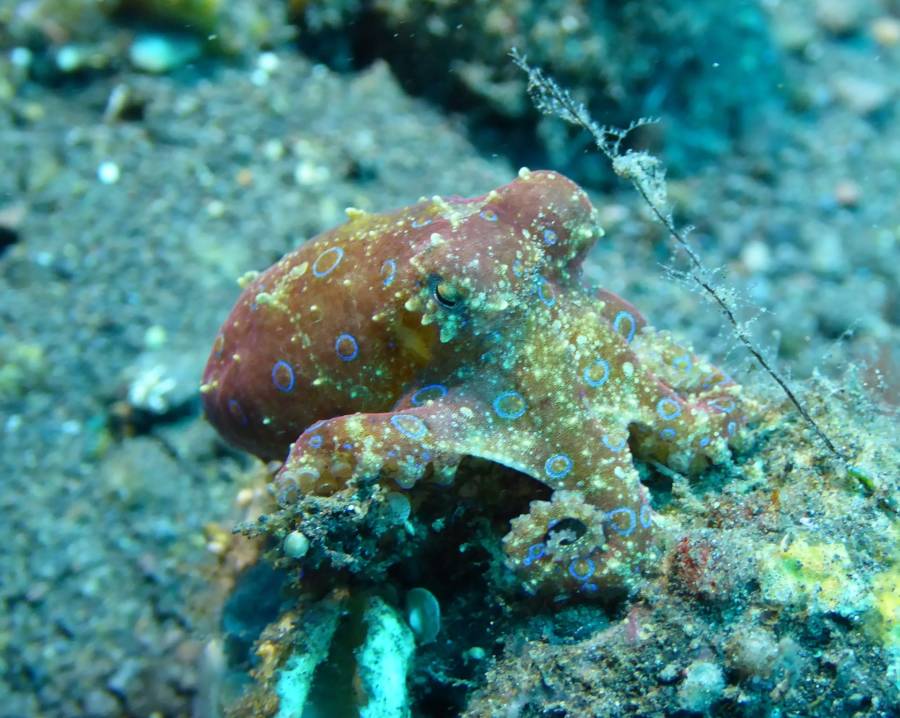 Officially known as the Hapalochlaena maculosa and sometimes referred to as the blue-spotted octopus, the blue-ringed octopus is less than five inches in diameter, weighs a mere ounce, and has eight flexible arms at its disposal. Like other octopuses, its eight arms have suction pads. And like other octopuses, it has a tiny beak hidden away until mealtime.

Unlike other octopuses, however, the blue-ringed octopus can produce a fatal, paralyzing neurotoxin known as tetrodotoxin. (All breeds of octopus are venomous, but the blue-ringed variation is by far the most lethal.)

This substance — produced in the octopus’s salivary glands — is distributed all over its body, particularly along its arms and stomach.

How did the blue-ringed octopus become so deadly? Like other mollusks, these octopuses have a soft and sack-like body. Without a protective shell, scientists think they likely needed a way to defend themselves. Thus, the creature developed an impressive display system of iridescent rings, flexible arms, high sensory systems, and notable brain size. 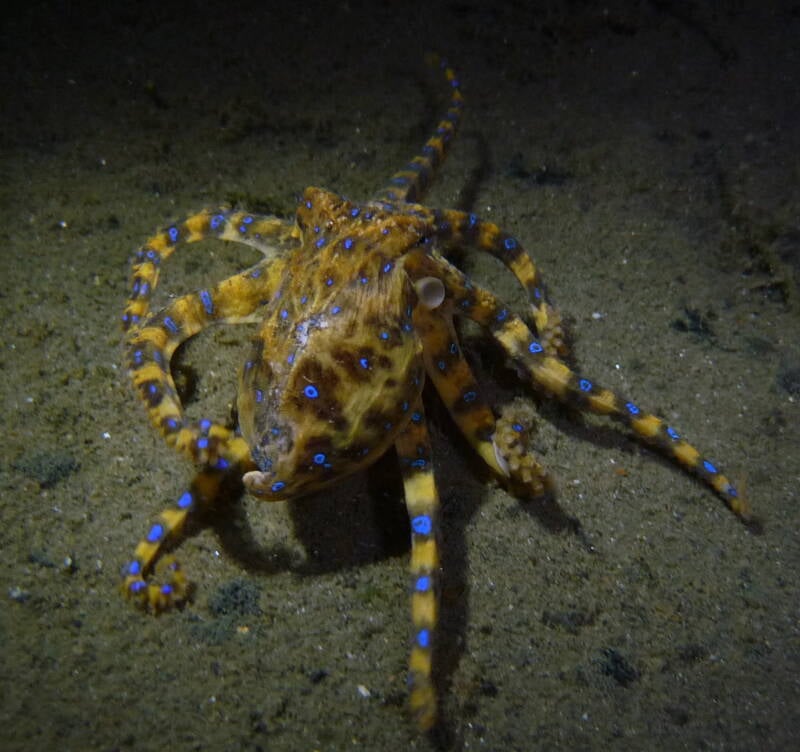 Saspotato/FlickrA blue-ringed octopus in the ocean.

Perhaps unsurprisingly, this deadly octopus is prevalent in Australia — which is also home to venomous animals like the box jellyfish and Sydney funnel-web spiders. Although beachgoers throughout the Indo-Pacific may want to keep an eye out for a flash of bright blue, the octopus is particularly common in Australia’s southern region.

These blue-ringed ocean dwellers have a pretty short lifespan. From pea-sized babies to an adult ping-pong ball, the octopus usually survives no longer than three to four years. But in that time, they can do plenty of damage — thanks to their deadly neurotoxin.

How The Octopus’s Deadly Neurotoxin Works 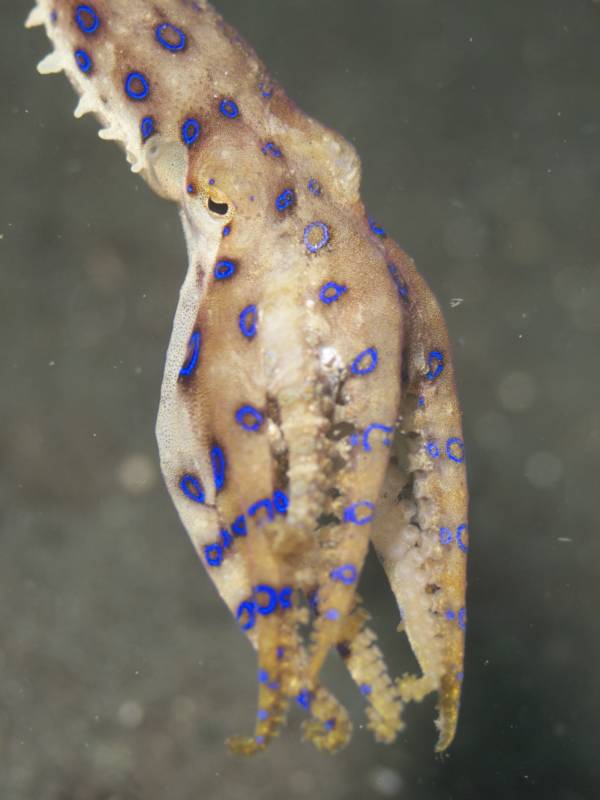 For such a beautiful creature, the blue-ringed octopus is extremely deadly. Its neurotoxin, tetrodotoxin, is also found in pufferfish and is used by the octopus for hunting.

Once the octopus identifies its prey — maybe crabs, shrimp, or fish — it cracks through its exoskeleton. Then, the octopus secretes its venom into its victim’s bloodstream. The poor crab or fish first goes numb and then is paralyzed. With its prey subdued, the blue-ringed octopus starts its feast.

Sometimes, however, the octopus uses its venom when it feels like it’s in danger. Like, for example, when a curious human picks a blue-ringed octopus up on the beach.

Feeling threatened, the octopus will likely bite. Its venom will immediately cut off that person’s nerve signals, numb their muscles, and send them into complete paralysis. A human victim may experience vision loss that extends into blindness, inhibited motor skills, loss of smell, touch, taste, or hearing, and an inability to swallow. 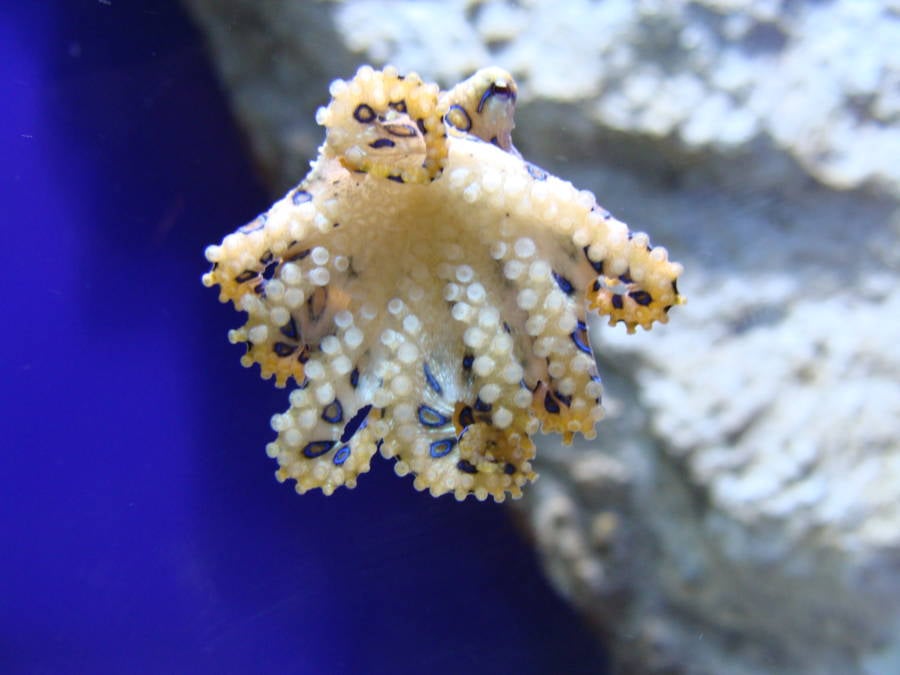 Wikimedia CommonsA blue-ringed octopus in the Aquarium Finnisterrae in Spain, 2008.

Ultimately, it’s the muscle paralysis that can kill — the heart is a muscle, after all. Without the blood-pumping organ functioning as intended, lungs won’t receive the oxygenated blood they need to do their job.

Thus, a human victim of the octopus will experience respiratory arrest, with their last known contact on Earth being a small, seemingly harmless octopus. 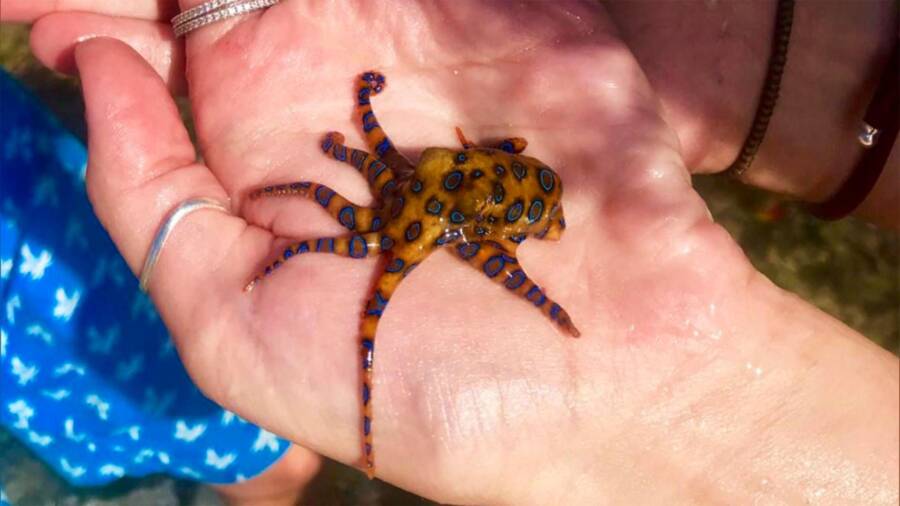 YouTubeThis woman in Bali picked up a blue-ringed octopus without realizing the risks.

Breathe a sigh of relief — the blue-ringed octopus bite is not necessarily fatal. There have been several cases of close calls among humans who accidentally touched the animal.

After a toddler playing in the shallows of a beach in Australia accidentally touched an octopus in 2006, he spent the night on life support. Fortunately, he survived his bout with neurotoxicity. 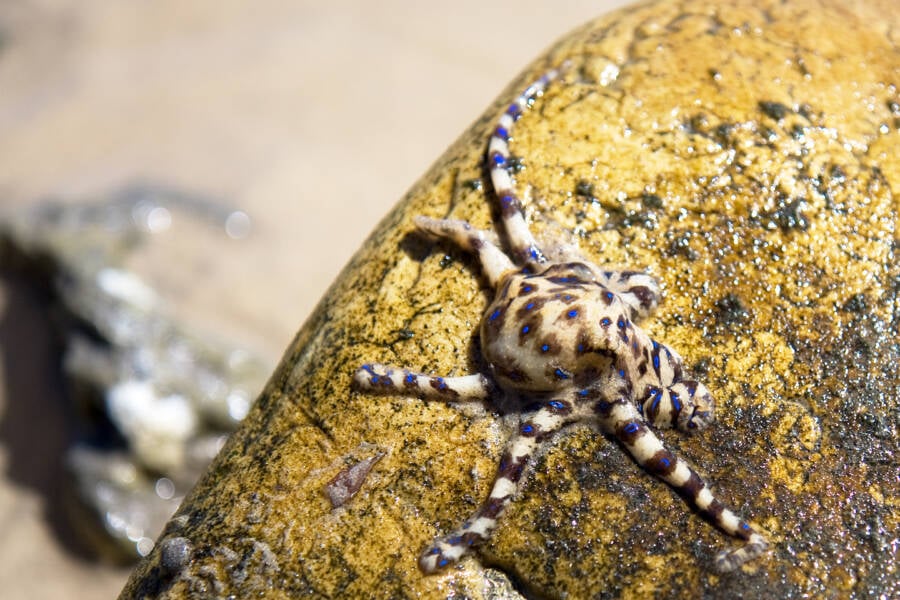 CirclesOfLight/FlickrAn octopus flaring blue after a human flipped over its rock.

But as Reddit user Delamoor described in a popular thread, the venom of a blue-ringed octopus is so debilitating to the human body that an emergency responder has to be cognizant of more than just the victims’ breathing.

Delamoor recounted an anecdote from a teacher who had performed CPR on a blue-ringed octopus victim. He did so until emergency services arrived on the scene, but the first responders were so busy saving the person’s life by prioritizing respiratory function, that they forgot to shield the victim’s eyes — which had been paralyzed, open, and staring into the sun for hours.

“Total paralysis, easy for the first-aiders to not think to cover their eyes,” he explained. “Caused irreversible damage. They permanently lost their vision.”

How To Avoid A Blue-Ringed Octopus Bite 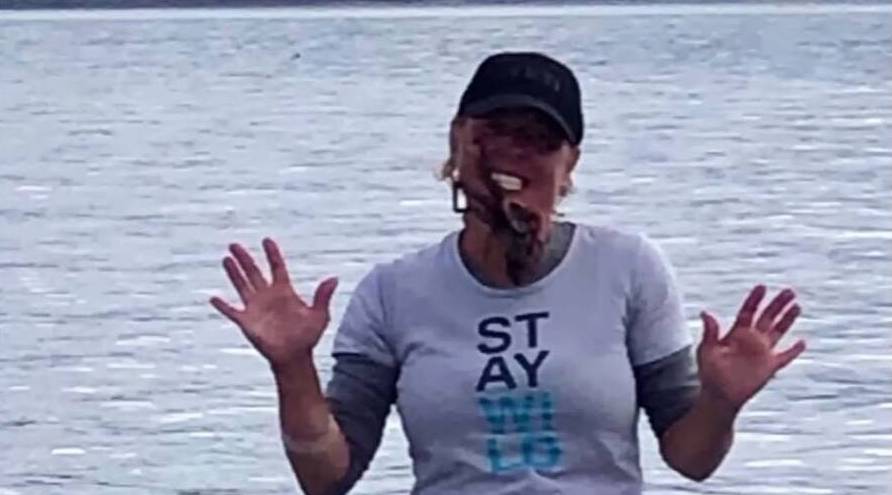 YouTubeThis woman put a Pacific octopus on her face and got bitten.

Fortunately, the blue-ringed octopus doesn’t pose a threat to most people. Very few humans are bitten each year. And most recover just fine after medical treatment.

“Unless you’re looking for them, encounters tend to be rare,” said Professor Jamie Seymour, a venom expert from James Cook University.

During the day, blue-ringed octopuses tend to hide behind rocks or in shells. They sometimes will seek shelter in bottles or cans, so beachcombers should use caution while picking things up. Because they hunt at night, anyone who fancies a nighttime dip should take extra caution.

Anyone who does come across a blue-ringed octopus should keep their distance. Don’t poke at it, pick it up, or pose for a photo.

Remember, these things only secrete their deadly substance if they feel threatened. So you see those blue rings flare, just move away — quick.

After this look at the impressively venomous blue-ringed octopus bite, read about the coconut octopus. Then, take a look at the blue dragon, the world’s most beautiful — and deadly — slug.