California’s Vaccination Bill: Why Vaccines Must Be Universal 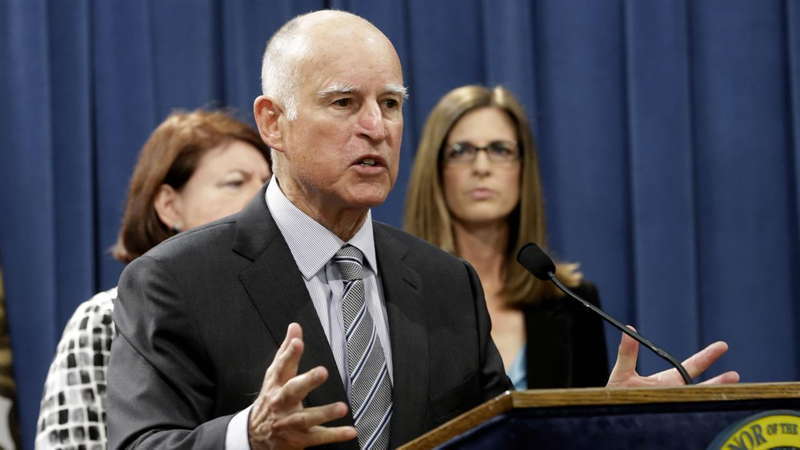 On June 30, 2015, California Governor Jerry Brown signed a bill requiring that all children in the state be vaccinated prior to attending school. Brown’s move has again raised the hackles of religious groups and anti-vaxxers, so we thought it would be a good idea to revisit the issue and answer some of the most commonly heard objections to this rare outbreak of functioning state government.

Most of the SB 277 controversy stems from the fact that the bill closes religious exemptions from getting vaccines, and forces people to have chemicals injected into their children’s bodies. Put that way, it’s no wonder the law has inspired such over-the-top rhetoric. Take Jim Carrey, for example:

Pretty serious stuff. Usually, we put child-poisoners in prison, and fascism is the political movement that tried to take over the world awhile back. Is it possible he’s just lost his mind? If he’s nuts, he’s not alone–at least 3,000 people agree.

Here are some of the more common complaints, presented as fairly as possible, with explanations of why they’re simply wrong.

This is one of the oldest complaints about vaccines. According to these skeptics, vaccines introduce harmful, non-specific “toxins” into the human body, and mustn’t be injected into children. Among the many “toxic” additives that these skeptics cite, the primary culprit is a mercury-based preservative called Thimerosal, which was included in some MMR and flu vaccines before it was phased out in the 1990s. To the people making these complaints, additives like Thimerosal cause all kinds of health problems such as autism and type I diabetes, leaving millions of people to suffer needlessly.

For sanity’s sake, lets stick to the two big claims: MMR vaccines cause autism, and Hep B vaccines cause diabetes. Much has been said about the MMR-autism link, particularly by actual experts. One such expert is the US Centers for Disease Control and Protection, which just comes out and says there’s no link between vaccines and autism. It’s worth noting that the only study ever to show such a link was later retracted by the journal that published it, and the researcher who wrote it owned stock in a company that produced a competing product and had his credentials revoked by his university for academic fraud.

As for diabetes, this article suggests that there could conceivably be a link between hepatitis vaccines and type I diabetes. Four years later, the same source, working with more data, totally debunked the claim.

Other Kids Are Already Immune 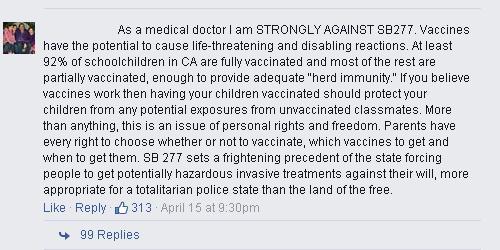 This is another common response made by anti-vaxxers. The idea is that, since so many kids are already vaccinated, it’s not necessary to top off that last 8 percent. If 92 percent of other peoples’ kids are already immune to the totally avoidable plagues we’ve conquered, then epidemics don’t stand a chance, and we shouldn’t bother with the holdouts. This is like a lawyer arguing that, since 92 percent of businesses already pay taxes, it shouldn’t matter if the remaining 8 percent—including the firm he or she is representing—doesn’t bother.

Beyond the selfishness of such an argument, it’s empirically false. To understand how shatteringly wrong it is, it’s necessary to give a little background on how immunity works, and how disease spreads. There will be math, but it’s simple enough that even people who play doctors on social media sites should be able to understand it.

The study of how diseases spread through populations is called epidemiology. Epidemiologists typically label the first person to introduce a contagious disease into a population as Patient 0. They do this to see how the virus leaps from one generation to another, so the first group of people to be infected is Generation 1, the second is Generation 2, and so on.

When assessing the epidemic potential of a virus, it’s important to understand its R-factor, or the average number of people who are going to be infected by each contagious person in the preceding generation. So, if Generation 1 contains three people, and the virus’ R-factor is 4, then Generation 2 will likely have 3 x 4 = 12 infections. To get the number infected in each generation, simply multiply the number of people in the previous generation by the R-factor.

A disease with an R-factor of exactly 1 is said to be endemic; for every one person who catches it, one more person will be infected, and the number of cases neither grows nor shrinks. An R-factor of less than 1, 0.9, for example, or 0.35, indicates that the outbreak is under control. For every 12 people infected with a virus rated R-0.5, for instance, six people will be infected in the next generation, then three, then one or two, then none. Any R value greater than 1 is potentially an epidemic, and it will grow. Even a low factor, such as R-1.1, is still out of control. For every 1,000 people who have it now, 1,100 will have it in the next generation.

Ebola has an R-factor of between 1.5 and 2.5, while smallpox, polio, and rubella have R factors that range from 5 to 7. Mumps and diphtheria can also reach 7. Pertussis goes from 12 to 17. Measles can reach 18. That’s 18 people, mostly children, infected for each previously infected child. Try this – get a calculator and press “1.” Then, multiply that by 18. That’s the number of cases in Generation 1. Press Enter again. That’s Generation 2. Press Enter again for Generation 3. And again. And again. Now consider that 1 or 2 in 1,000 people infected with measles die, even in developed countries. In 2011 alone, the World Health Organization estimates that 158,000 people – again, mostly children – died of measles. That’s down from 630,000 in 1990, almost entirely because of vaccinations.