Meet ‘Van Gogh,’ The One-Eared Dog Who Paints Masterpieces With His Tongue

After being rescued from a dogfighting ring in North Carolina, this seven-year-old dog is getting a second chance at life — and making beautiful pieces of art. 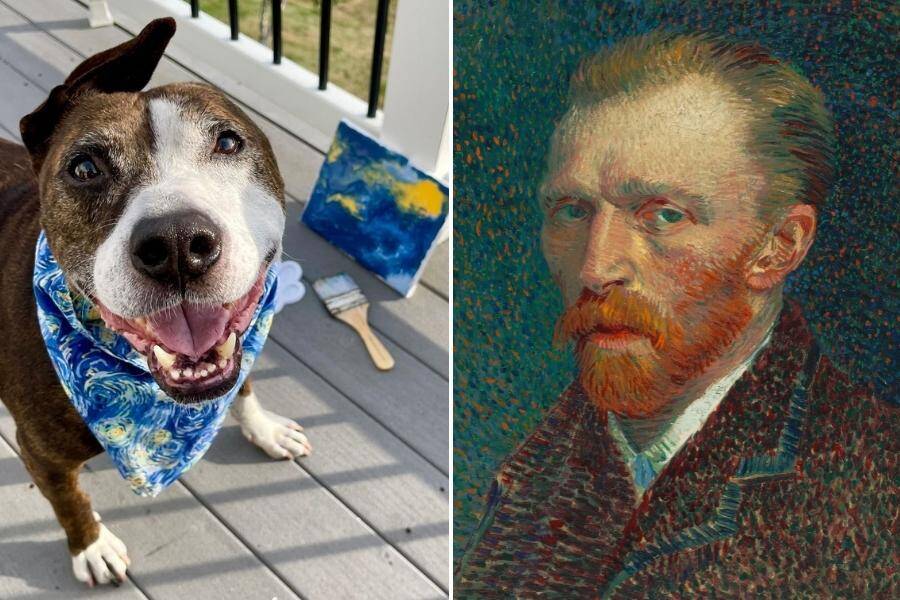 Vincent Van Gogh was a legendary 19th-century artist who painted over 2,000 pieces and famously severed one of his ears in a bout of madness that he later could not recall.

But Van Gogh — sans-Vincent, that is — is a seven-year-old boxer-pit bull mix who shares more than one similarity with his namesake. For one thing, Van Gogh the dog only has one ear. For another, he is a phenomenal painter.

As KCRA reports, when Van Gogh was rescued from a dogfighting ring in North Carolina, where he was used as a bait dog, his ear was in such bad shape that it required amputation.

But rather than let that get him down, Jaclyn Gartner, founder of Happily Furever After Rescue in Connecticut, determined to give the dog the happy life he deserves. 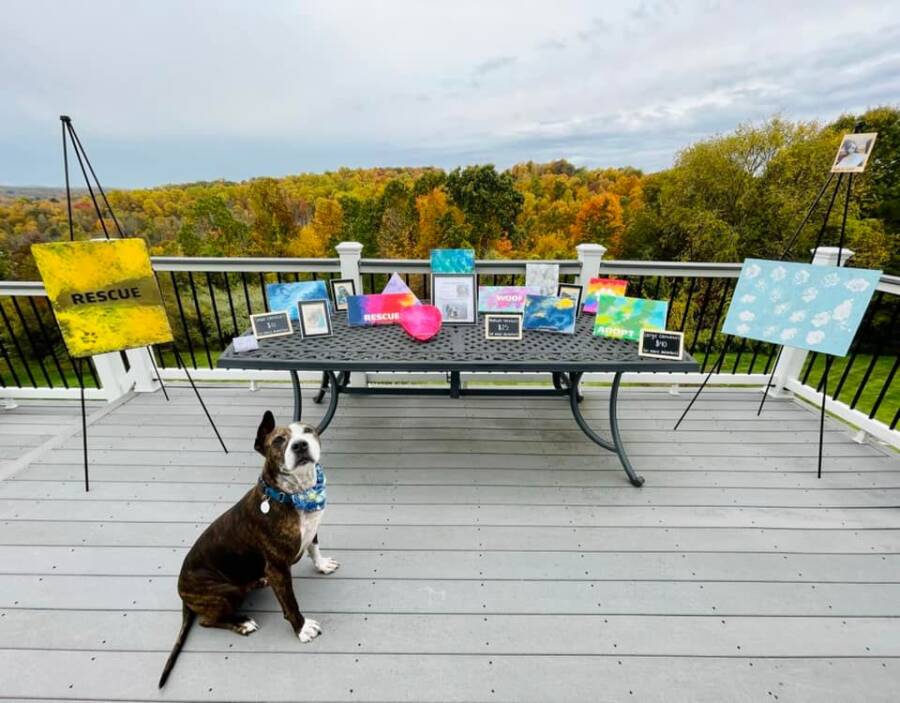 Happily Furever After RescueVan Gogh, the one-eared boxer-pit bull mix, standing in front of a display table featuring artwork that he painted — with a little help from his human friend.

Not only did Gartner name him after the famous one-eared painter, she also found a clever way to help Van Gogh create beautiful art pieces of his own.

Gartner takes a blank canvas and drops several globs of paint onto it. Then, she places the canvas into a sealed plastic bag — which she then coats with peanut butter.

Gartner even put together a gallery show to help raise money and find a permanent home for Van Gogh. Unfortunately, only two people showed up.

Since then, however, Van Gogh has become something of a celebrity himself in the dog-art world. He’s now sold 30 pieces averaging around $40 each, and has been commissioned to create more.

While he may have found artistic success, Van Gogh is still missing something he desperately needs: a forever home. 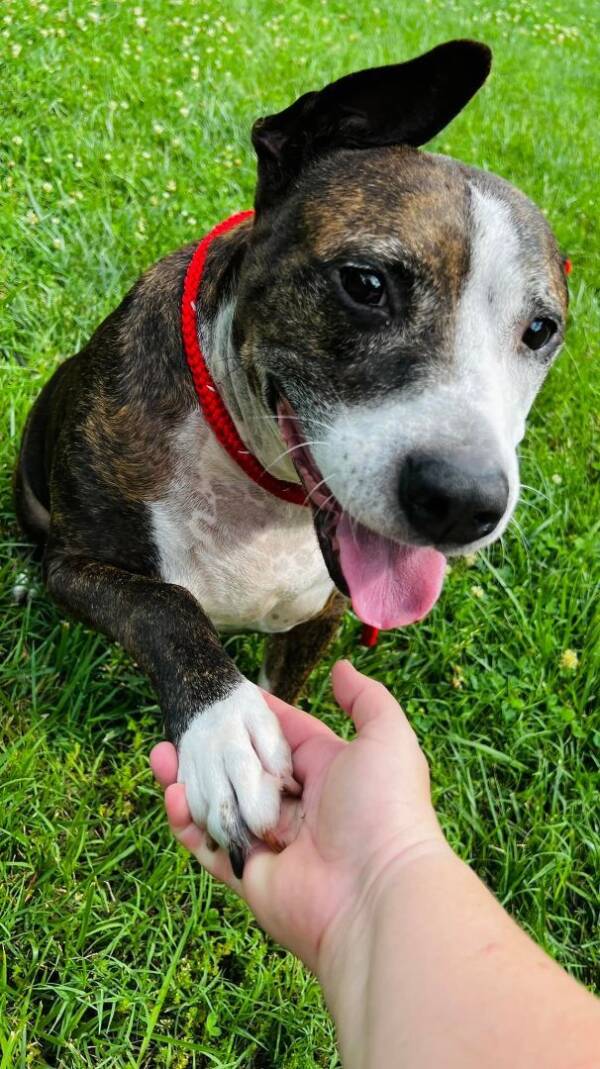 Happily Furever After RescueVan Gogh’s adoption listing says he is “the sweetest, most down-to-earth dog you could ever meet – you cannot help but fall in love.”

He has been described as a “well-mannered gentleman” and “a relaxed guy who enjoys nothing more than being by your side, getting all the belly rubs you have to offer, going for leisurely strolls around the neighborhood, or jumping in the car for a drive.”

Certainly, Van Gogh’s life as an artist is leaps and bounds better than the environment he was forced into in North Carolina — and while his story is inspiring, it also serves as a grim reminder of the harsh realities of dog fighting in the United States.

Statistics show that each year upwards of 16,000 dogs are estimated to die in dogfighting arenas. And although dogfighting is a felony in all 50 states, roughly 40,000 Americans are involved in the practice, according to The United States Humane Society.

These dogs face horrific training routines, and the weaker dogs are often only used as disposable training targets. A single dogfight can last hours, with bets reaching as high as tens of thousands of dollars.

The crime is in fact so prominent that half of all police officers have encountered dogfighting at least once in their careers, as revealed in a 2015 ASPCA poll. 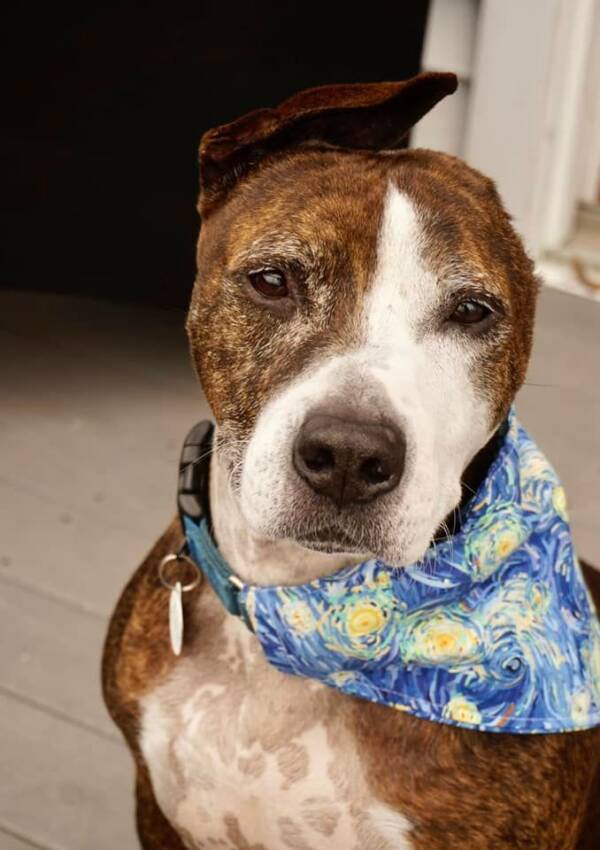 Happily Furever After RescueVan Gogh managed to escape his horrible situation and find a new life, but many dogs out there are still being forced to fight in dogfighting rings.

Fortunately, if there is to be an upside, many of the dogs rescued from these rings are rehabilitated and can go on to be happy, loving members of a family — just like Van Gogh.

Learn more about this talented dog’s namesake with these surprising facts about Vincent Van Gogh. And did you know that a fine dining restaurant recently opened in San Francisco — exclusively for dogs?