The Story Of ‘Vasa,’ The Epic 17th-Century Swedish Warship That Sank 20 Minutes After Launch

The "Vasa" ship was supposed to be a feat of engineering in 1628. But then, it buckled under its own weight and sank to the bottom of Stockholm Harbor. 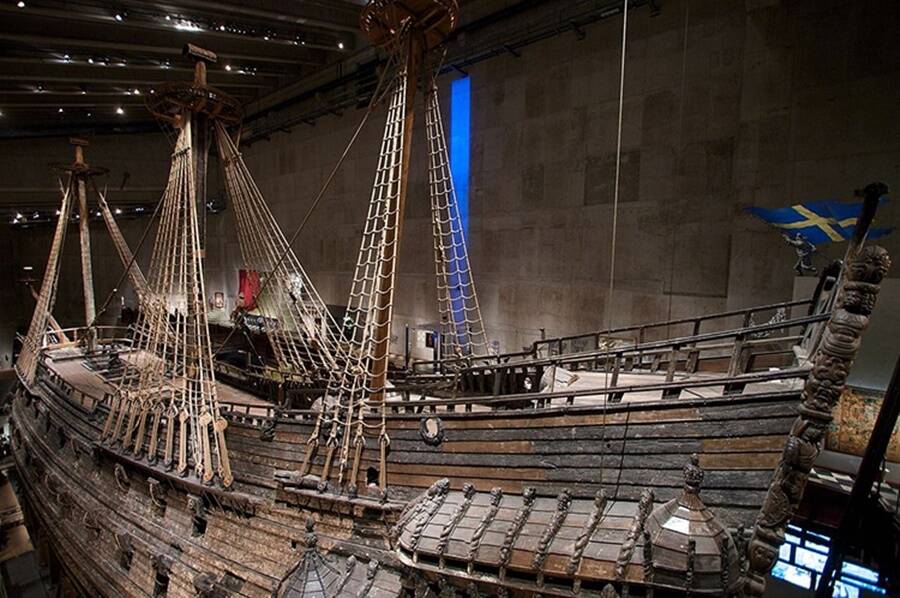 Public DomainVasa was a formidable 17th-century warship built under the Swedish Royal Navy.

In 1628, the Swedish Royal Navy debuted Vasa, an impressive 226-foot-long war vessel. The ship had the astounding capacity to carry 64 heavy gun cannons, which was an unprecedented armament aboard any battleship at the time.

But within minutes of its departure, the ship sank to the bottom of the Baltic Sea where it stayed for more than 300 years before it was finally rediscovered. Resurfacing the ship was one of the biggest archaeological excavations of the 1960s.

But how did Vasa find itself at the bottom of Stockholm Harbor in the first place?

Vasa Was A Beacon Of Sweden’s Power 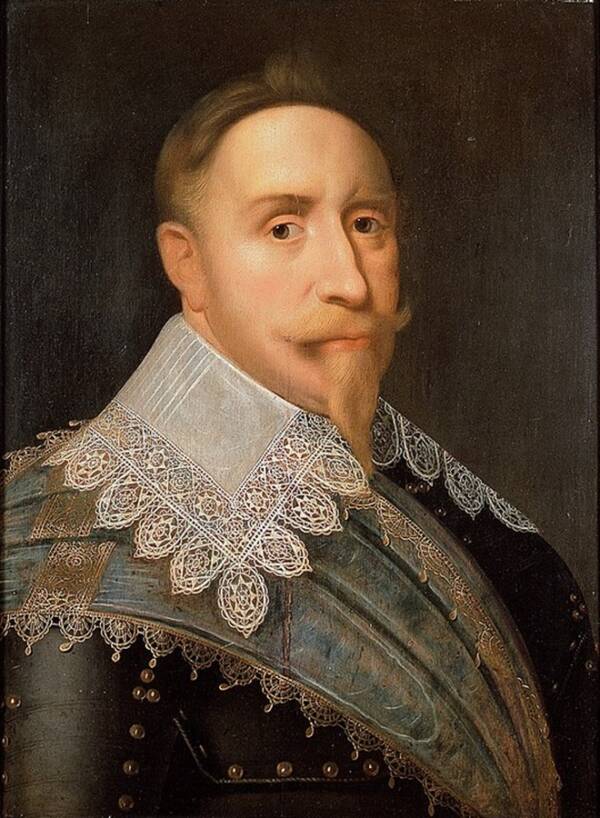 In the 17th century, Sweden rose to power as a major European empire after winning wars against Denmark, Poland, and Russia, and it ruled over most of the Baltic region.

It was King Gustavus Adolphus, or King Gustav II Adolph, that led Sweden through this series of triumphant wars. Indeed, for 18 of the 21 years that he reigned between 1611 and 1632, the Swedish Army was embroiled in battle.

As a testament to the kingdom’s strength, the king commissioned a larger-than-life battleship that would become known as the Vasa. The distinct name of the Swedish ship Vasa, which was designed by shipmaster Henrik Hybertsson, was inspired by the Vasa dynasty from which the king had descended. 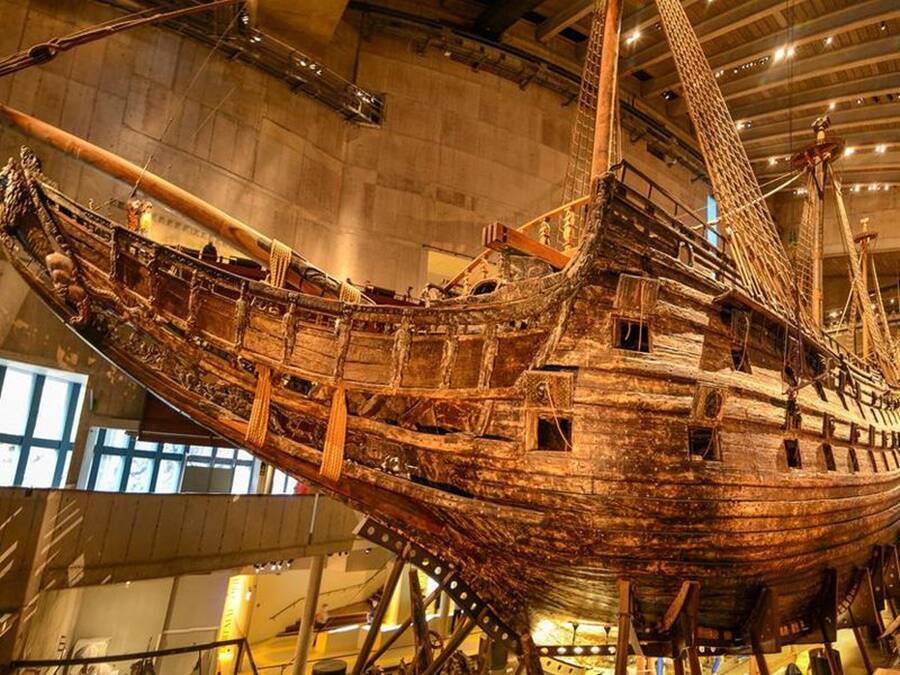 Public DomainThe Vasa ship was supposed to signify the growing power of the Swedish Empire.

The wooden vessel stretched over 226 feet with an exterior covered in ornate carvings that portrayed stories of the royal family and the king himself. While there were other Swedish warships that were bigger and stronger, Vasa carried an unprecedented amount of bronze armory.

Equipped with 64 cannon guns, the Swedish warship Vasa was among the most formidable sea vessels under the nation’s royal navy. It was heralded as an engineering feat during its construction and was expected to strike fear among the empire’s enemies.

How The World’s Most Spectacular Warship Sank 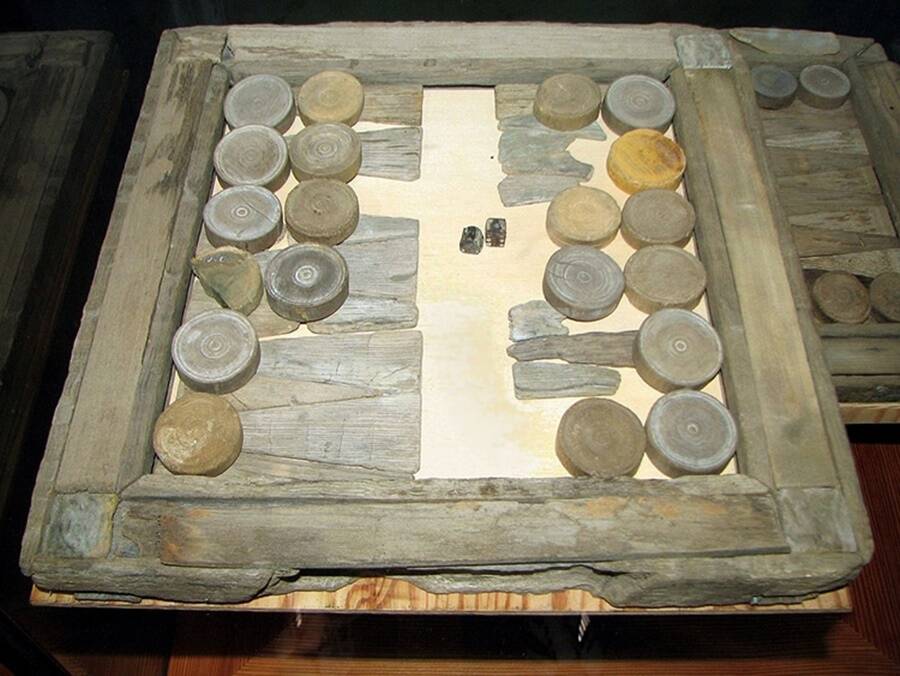 Public DomainThis backgammon game board was among the 40,000 items excavated from the sunken ship in the 1960s.

Despite its ornate exterior, Vasa was riddled with design flaws.

For starters, the ship was originally only supposed to carry 36 cannon guns at 24 pounds each — nearly half the number it wound up with. According to an archaeologist who studied the ship after it was rediscovered, Vasa‘s gundeck was far too heavy. Additionally, the ship appeared to have been designed by someone with no experience building a ship of such epic proportions.

The ship was likely also overburdened by the weight of its flamboyant wooden decorations. The king’s desire to debut the ship as quickly as possible likely only made its construction that much more flawed.

Yet on August 10, 1628, the great Vasa ship was revealed to the public and set sail on its maiden voyage from Stockholm Harbor. It was supposed to carry a portion of its crew and guests to the fortress of Vaxholm, where the guests would disembark. 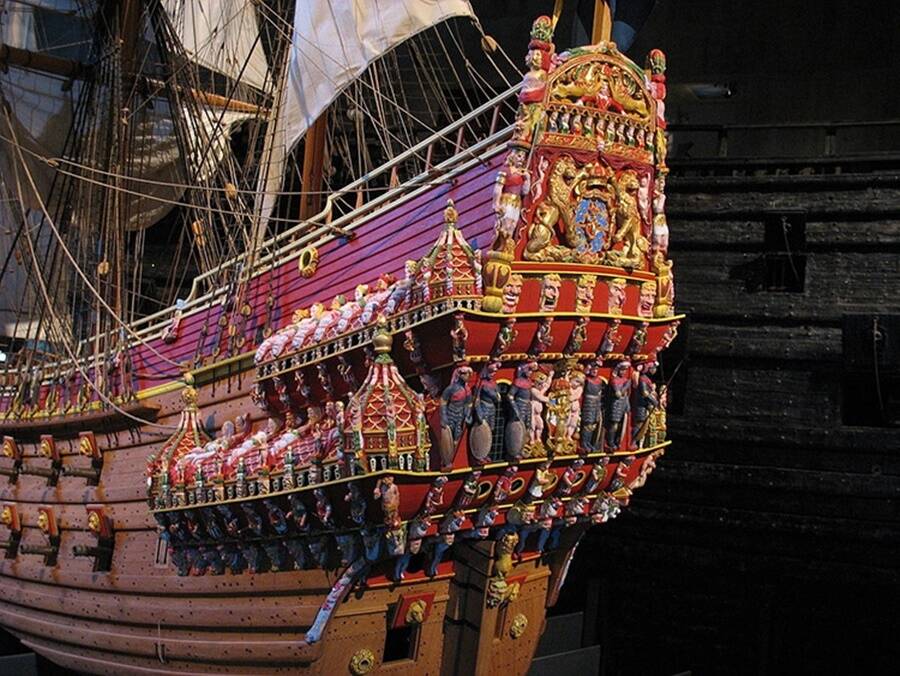 Vasa was then scheduled to continue its journey to the summer fleet base on the island of Älvsnabben, where it was meant to become the flagship of the reserve squadron. Its terrifying arsenal of cannons would act as naval reinforcements at the Gdańsk blockade against Poland-Lithuania or join the rest of the squadron at Stralsund.

But within 20 minutes of its departure at sea, Vasa was hit by a strong wind and slowly began to sink in front of thousands of horrified onlookers, including the king.

Spectators watched as a small gust of wind nearly toppled the giant ship onto its side. The ship recovered but was hit by another gust which tipped the vessel over onto its gun side.

That was all it took for the ship to become flooded with water, pushing it into its watery grave less than a nautical mile off Stockholm Harbor. 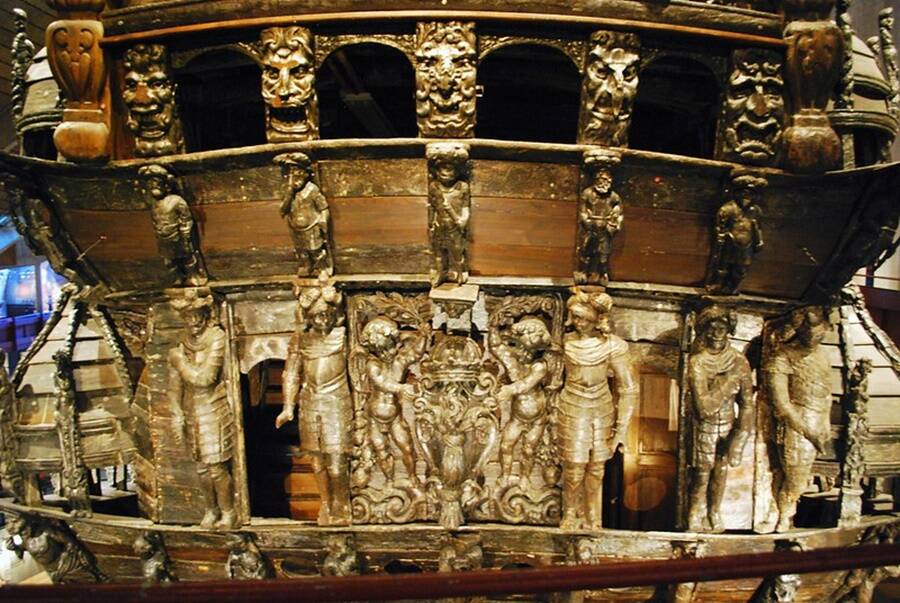 Hugh Llewelyn/FlickrThe Vasa is the only preserved 17th-century vessel in the world.

Roughly 30 people drowned in the sinking of the Vasa, and the crown consequently launched an investigation. It was carried out by a special commission made up of 17 councilors and naval officers.

The special commission was chaired by the king’s older half-brother, Admiral of the Realm Karl Karlsson Gyllenhielm. The surviving officers and senior petty officers were questioned before the commission.

The officers and crew members said they weren’t aware of any wrongdoing and that everything had been in tip-top shape before the launch of the Vasa warship.

But an admission from the shipmaster Jöran Matsson stunned the commission. According to Matsson, a demonstration ordered by Captain Söfring Hansson had been carried out the month before the launch.

The demonstration was witnessed by Vice Admiral Klas Fleming, Gyllenhielm’s deputy, and involved 30 crewmates running back and forth across the deck to test its stability.

They found that the ship was incredibly unstable. Despite this disturbing discovery, Fleming failed to report it back to his superiors, possibly due to pressure from the king to carry out a successful launch of the ship as quickly as possible.

Just as the inquest had found, modern studies on the ship’s remains confirmed that the ship’s ambitious design caused its untimely demise.

All this, combined with the king’s orders to rush the Vasa’s debut, led to its final, catastrophic result. The shipwreck remained at the bottom of the Baltic Sea for over 300 years.

Vasa’s sinking might have been a stain on Sweden’s history at one point, but today, the reconstructed ship has become a massive tourist attraction.

In 1961, formal efforts to recover the sunken ship were launched by archaeologists. But the vessel’s vulnerable wooden structure made its retrieval challenging.

Thankfully, the cold temperatures and low oxygen levels at the bottom of the Baltic Sea preserved the integrity of the ship and protected it from bacteria and “shipworms,” which typically attack sunken vessels in warmer climates. About 95 percent of the ship’s body was successfully rescued fully intact.

After the ship’s retrieval, a team of divers worked for another three years to collect parts that had fallen off the ship, such as parts of the foremast and mainmast, a few sculptures, and the collapsed beakhead. The Vasa ship’s 39-foot longboat was also recovered from the water.

After the ship was resurfaced, its entire exterior was sprayed down with a waxy substance called polyethylene glycol, or PEG, to prevent it from shrinking.

Archaeologists successfully recovered more than 40,000 items from within the ship’s hull. It took 30 years to catalog the bounty and it is considered one of the biggest scientific endeavors early on in the field of maritime archaeology.

In 1990, Vasa was publicly displayed for the first time at the Vasa Museum in Stockholm, where it remains today. It remains the only preserved 17-century warship that exists in the world.

Now that you’ve discovered the little-known story of the sinking of Sweden’s impressive Vasa ship, take a look at these rare photographs of the Titanic before and after the famous tragedy. Then, read about the discovery of the SS Cotopaxi shipwreck, the vessel that notoriously disappeared in the Bermuda Triangle.