The Way Baghdad Was

Even before the United States set its sights on Baghdad, people began to note its decline. Long considered to be the intellectual capital of the Islamic world, in the early 1900s the Iraqi city had already begun its transformation into a “once was”.

Centuries of Ottoman rule and over a decade of British occupation allowed sectarian divides to fester, and would only culminate following the country’s 1932 independence and exploitation of oil. Around a century later, the formerly sophisticated center of Mesopotamia is embroiled ceaseless conflict, war and strife. Looking back to its days of normalcy makes present-day Baghdad all the more haunting. These 1932 photos courtesy of Foreign Policy show a Baghdad before the turmoil of the past half century. 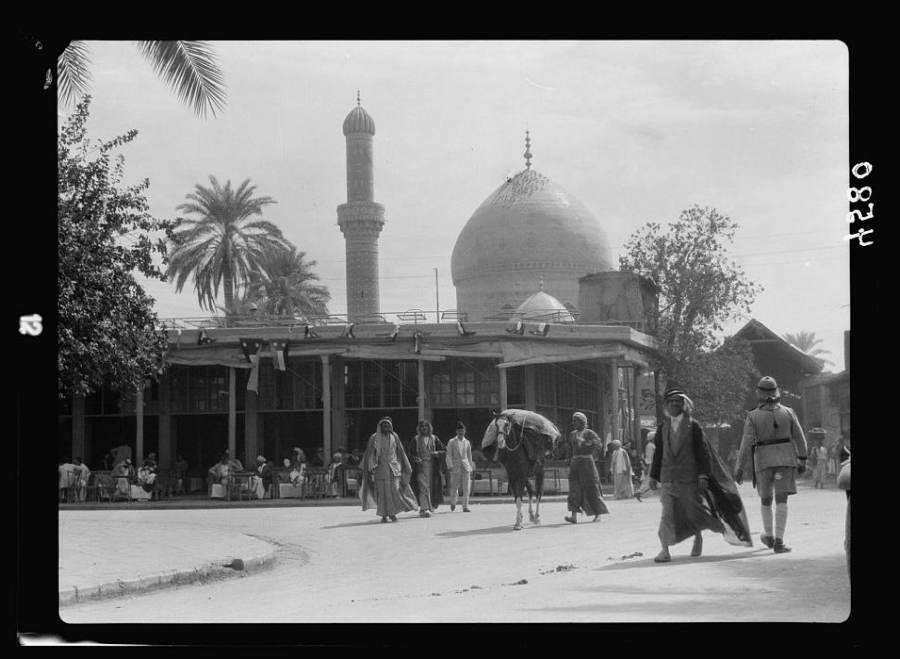 Pedestrians walk along the streets near the Midan mosque. 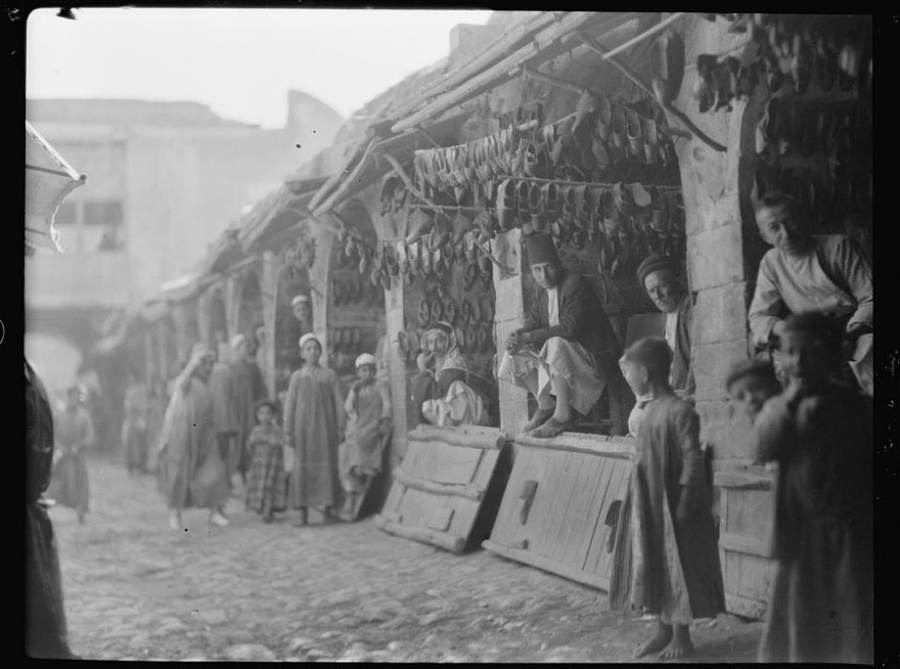 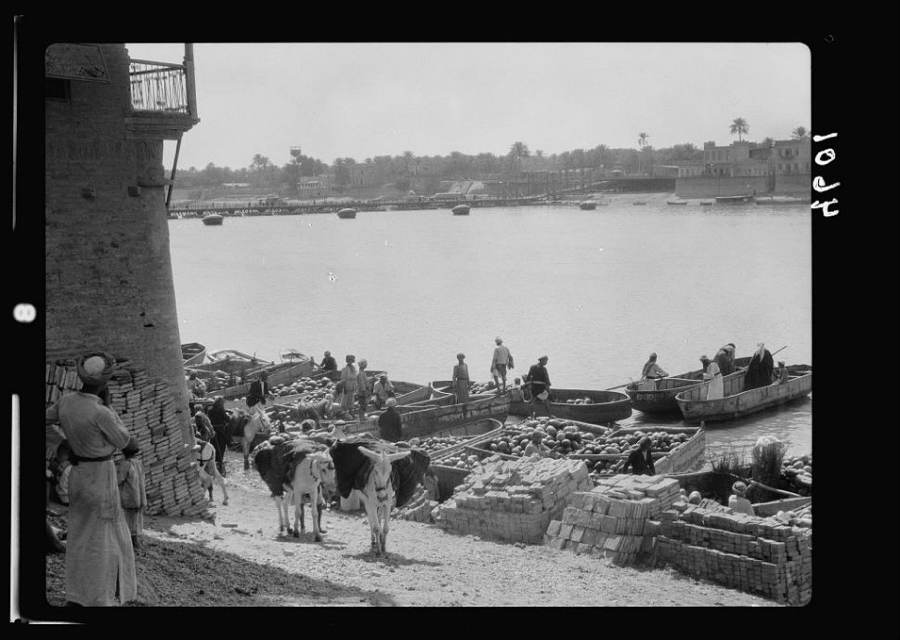 Workers load and unload goods from the river. Though Faisal attempted to change the nature of Iraq's economy early on, it still primarily consisted of agricultural goods. 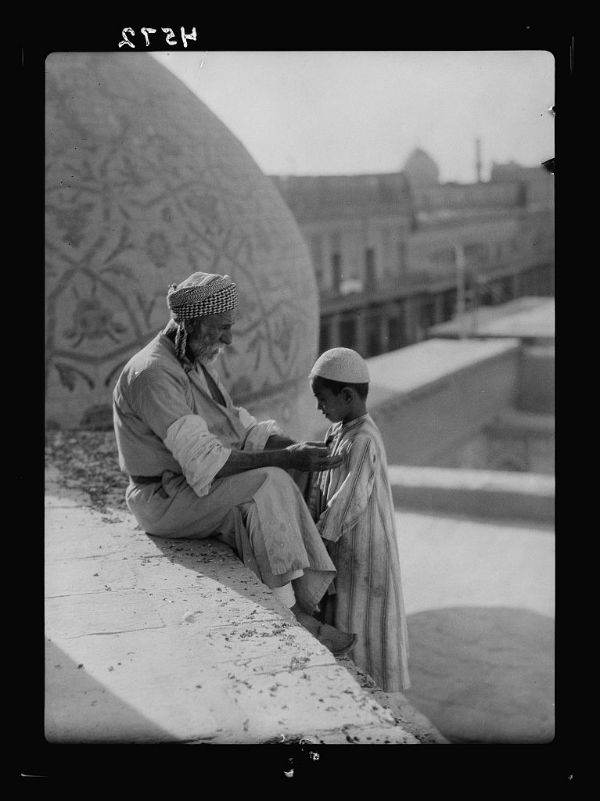 An elderly man speaks to a boy at the Haidar Khana mosque. It has since been damaged by bombings (2007) in a Shiite-dense part of the city. 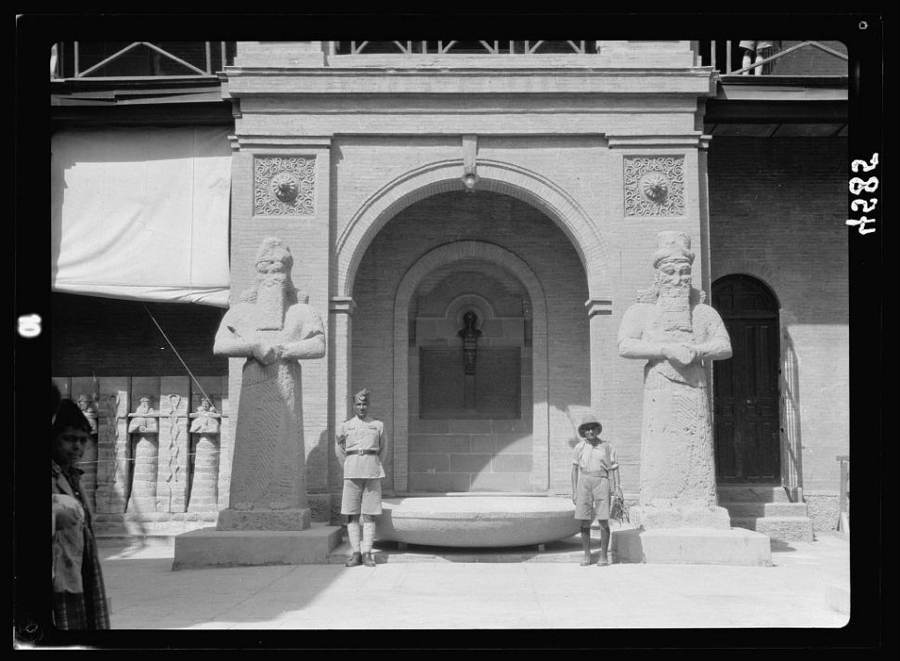 Before being looted in the early 2000s, the Iraq Museum was home to some of the most incredible archaeological findings from the region . 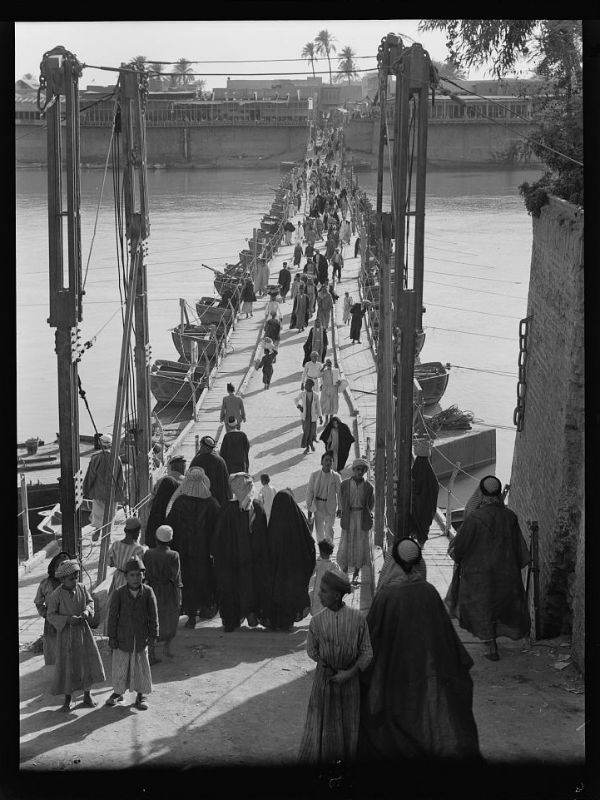 Pedestrians cross the Tigris River. Once a primary contributor to the Fertile Crescent, today the river is entrenched in pollution. 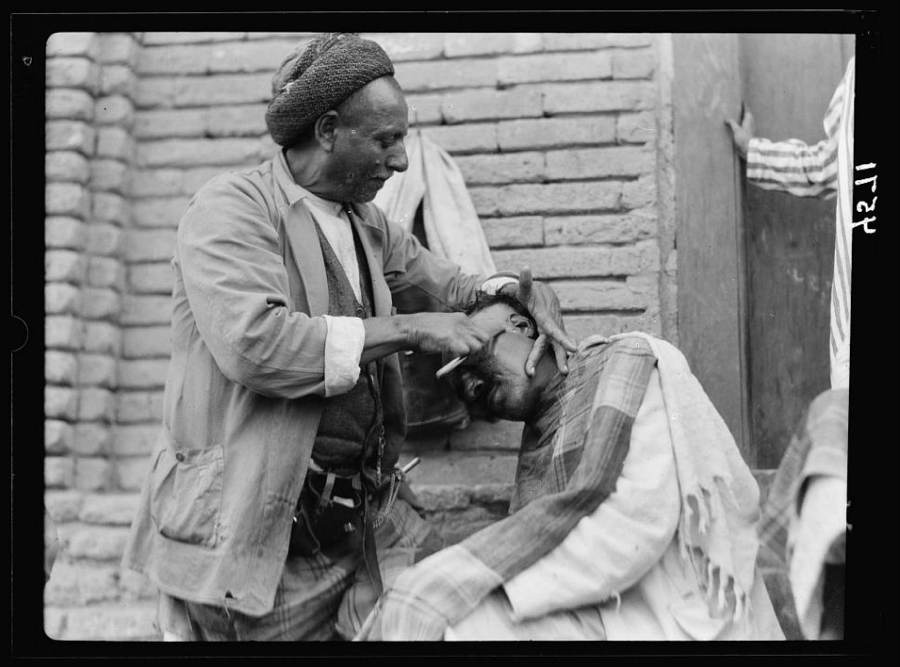 A street barber performing his artistry. 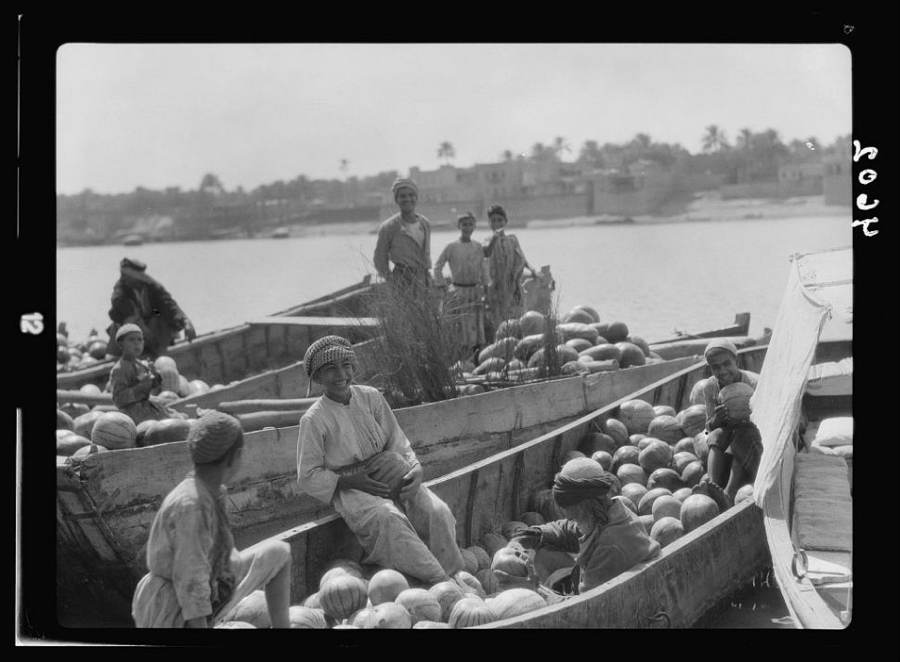 Boys sitting at the banks of the Tigris, in boats filled with watermelon. Watermelons grown in this region can grow up to 50 pounds and serve as a hydration resource for those afraid of drinking unclean water. 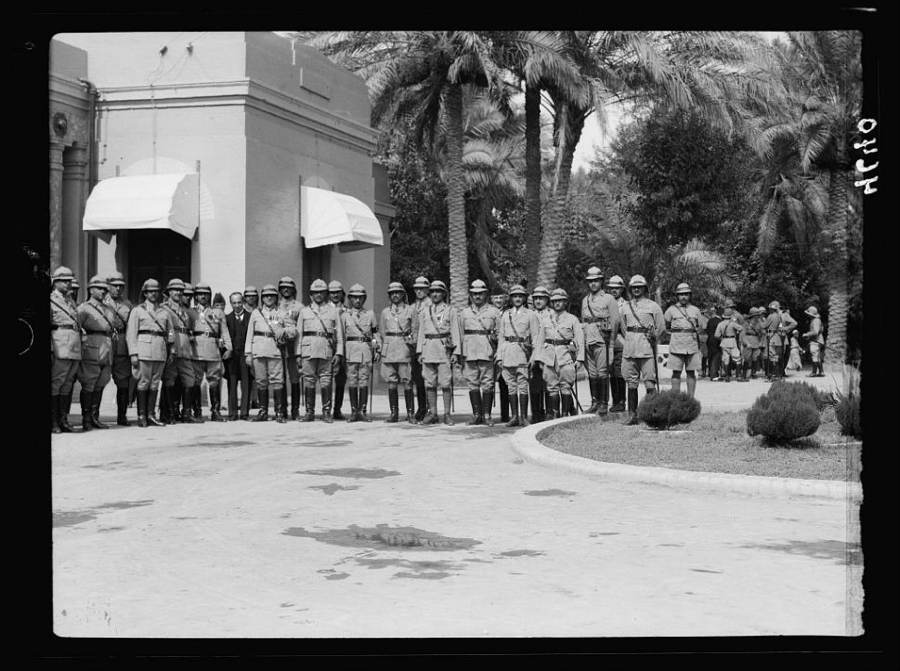 Iraqi army officers upon being inducted into the League of Nations. 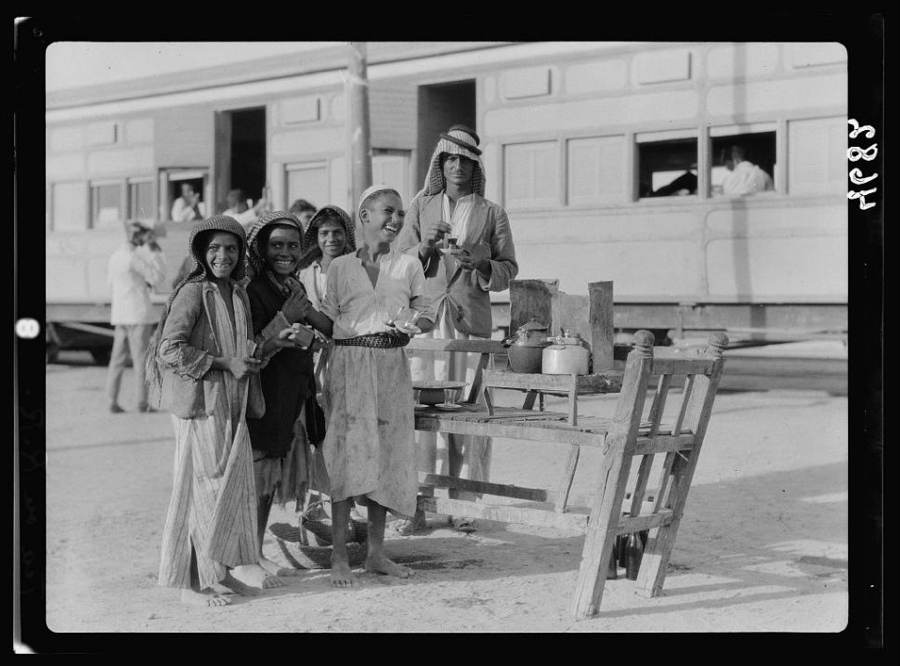 Tea merchants smile while on the job in Ur. 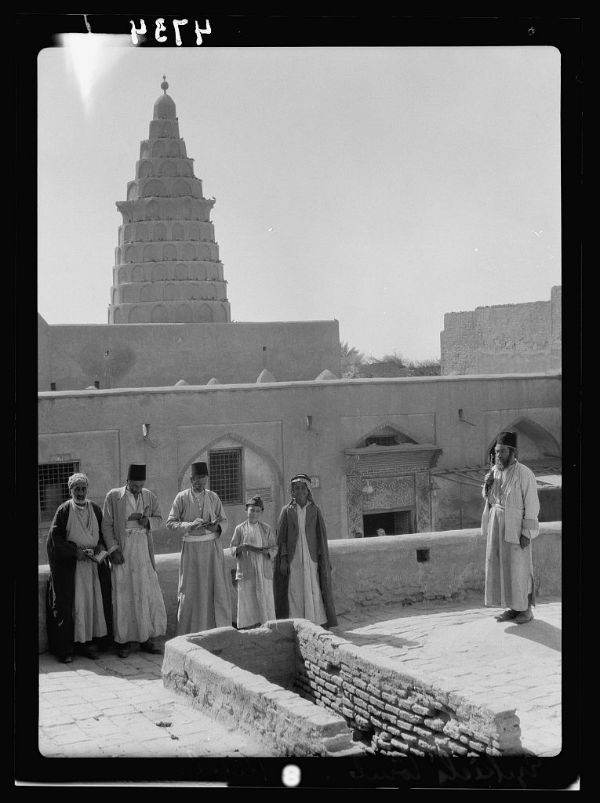 Rabbis stand before the tomb of Ezekiel. In the early 1930s, Iraq featured one of the oldest Jewish populations in the world. But with Israel's creation in 1948, many Jews were pressured to leave. Today, there is virtually no Jewish population at all within Baghdad's walls. 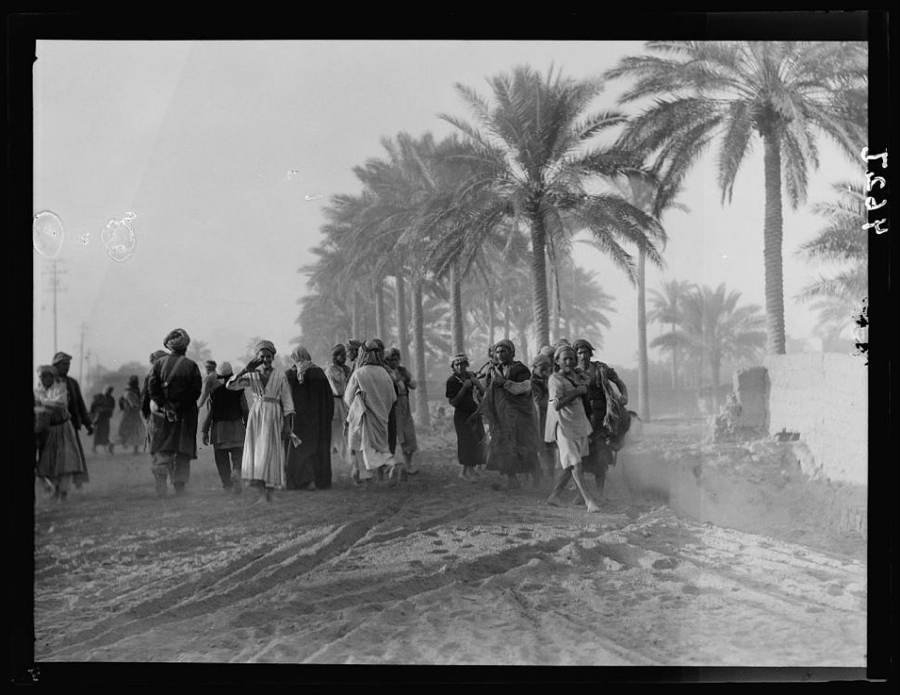 Boys carrying baskets of unwanted sand from a highway. The sand in Baghdad is not ideal for construction. 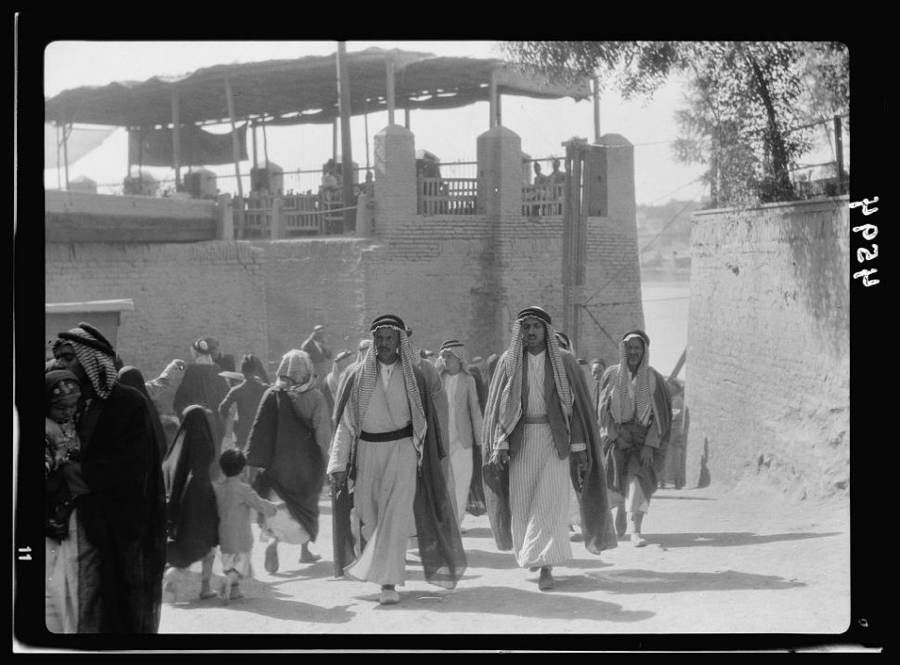 Men walk near the Katah Bridge. 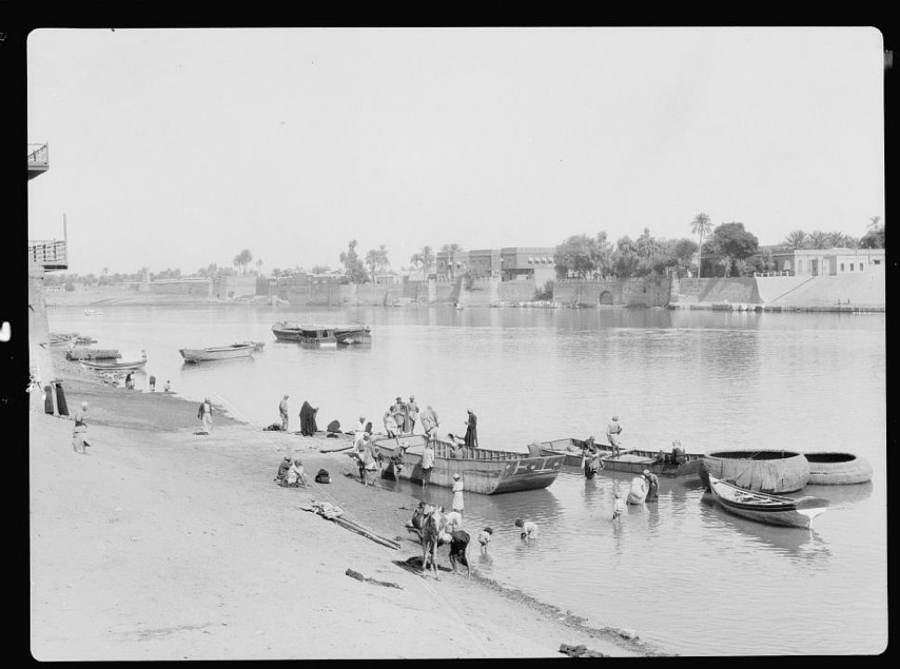 People crowding at the banks of the Tigris River, with Baghdad's walls looming in the distance. 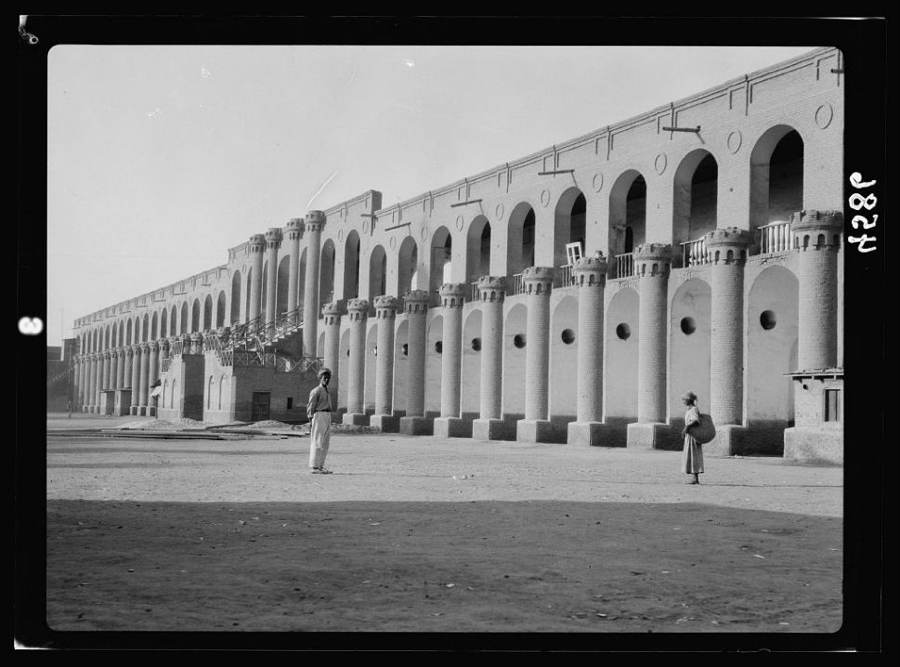 Outside the Turkish citadel, Qualla'a. The Ottomans conquered Baghdad in 1534 and occupied it until 1921. 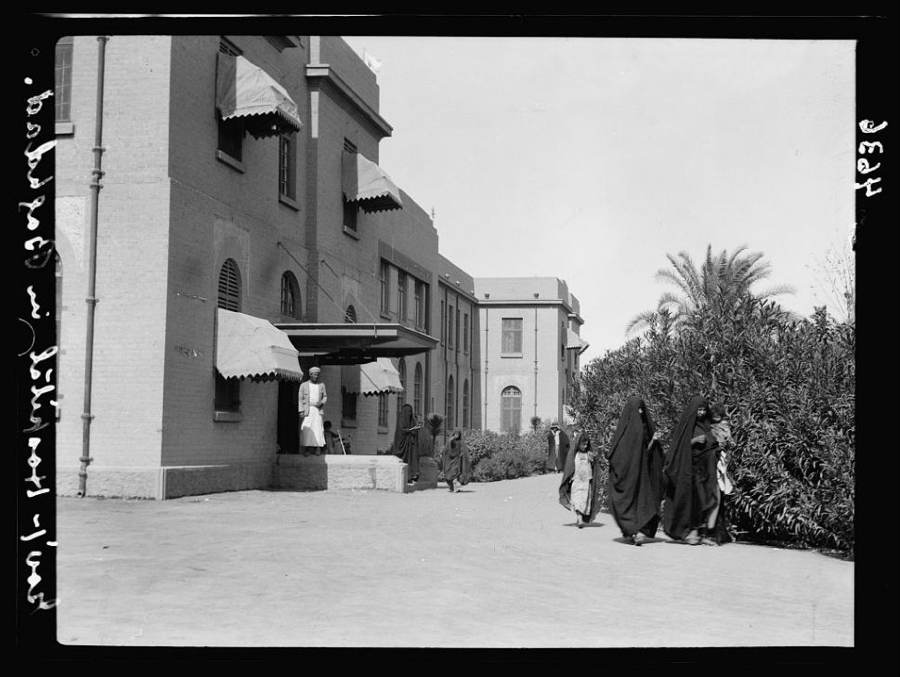 Women walking by the Royal College of Medicine, which still exists today as part of the University of Baghdad. 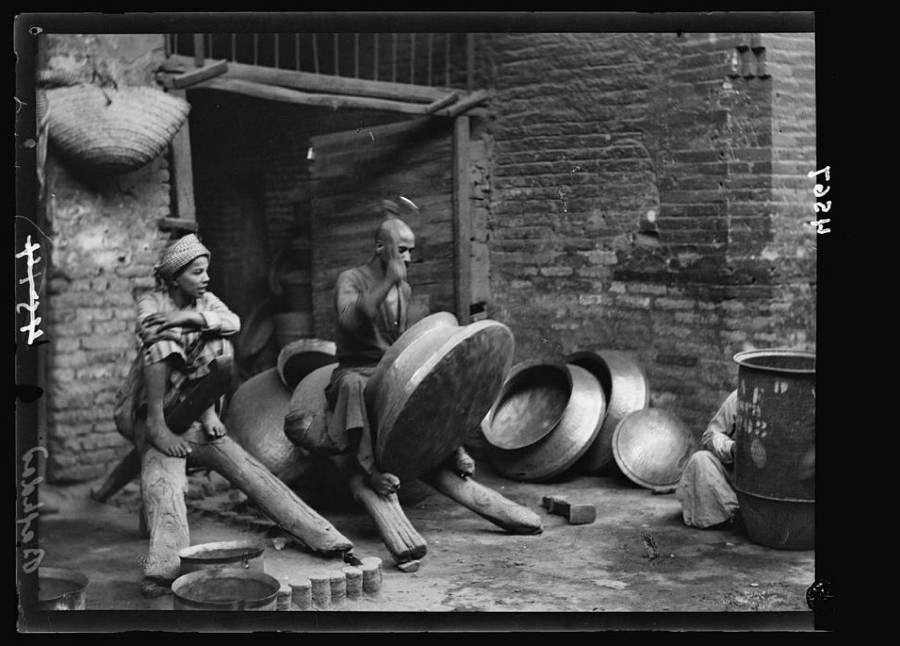 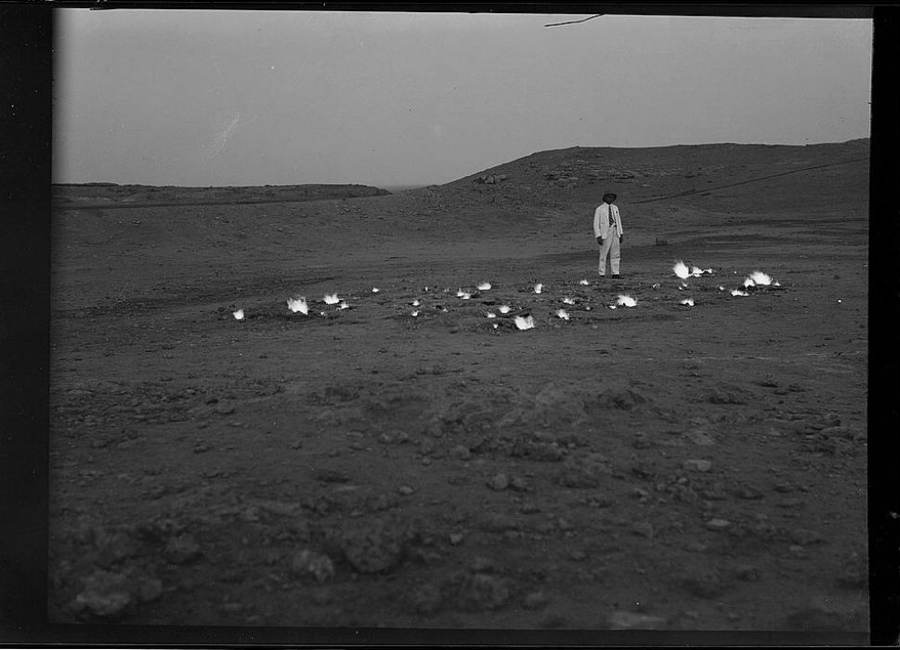 A man stands amid the fires caused by natural gas explosions near the Iraq Petroleum Company. 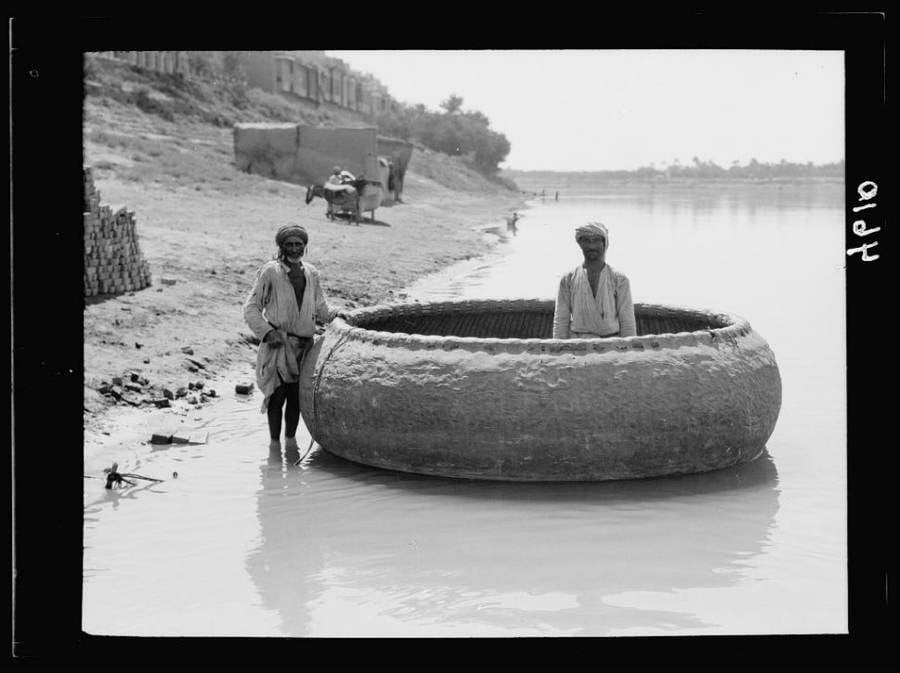 Men stand by a gufa on the banks of the Tigris. These boats are made from reed and asphalt, and can transport up to 20 people. 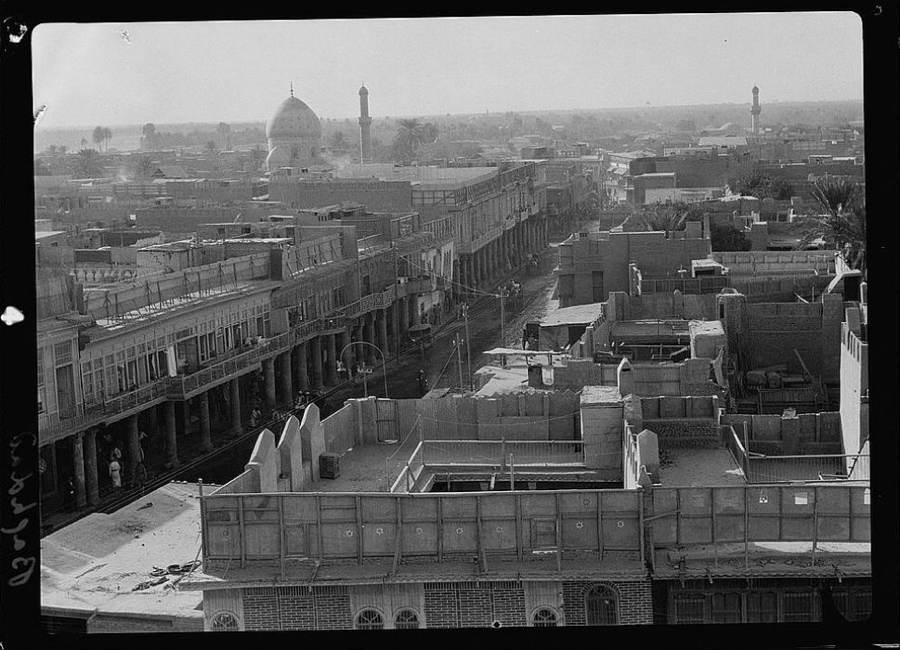 The Baghdad cityscape in 1932. 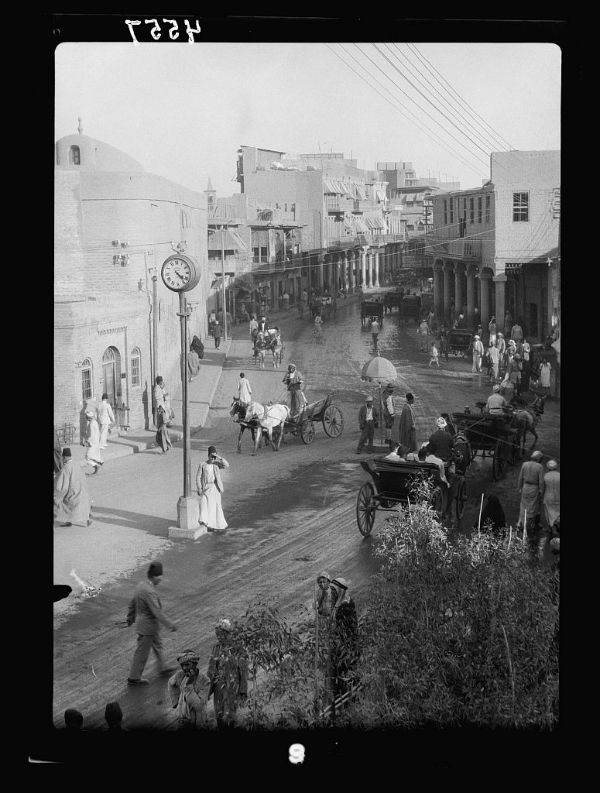 Men wear fezzes while walking about the streets of Baghdad. 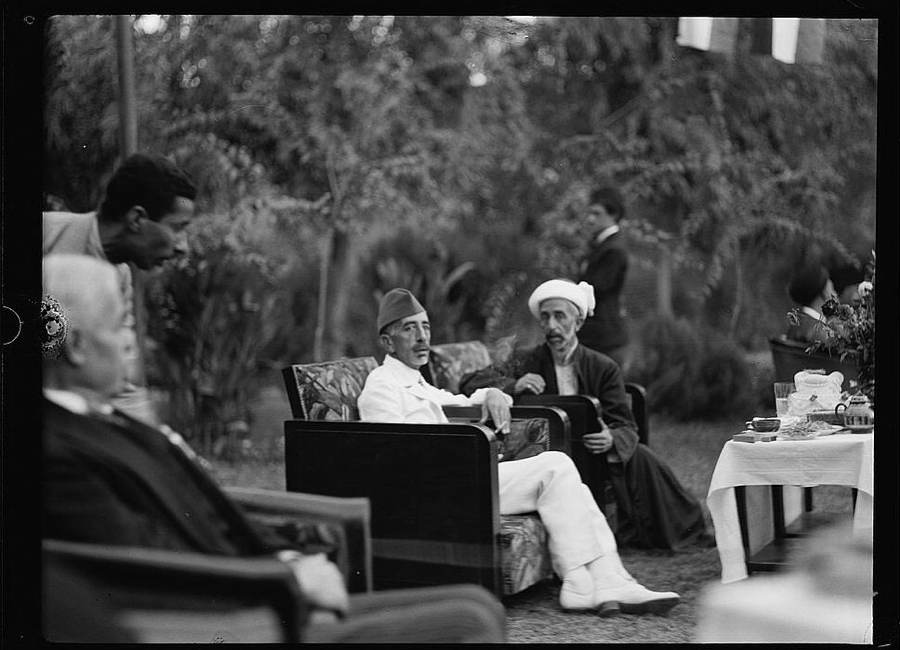 King Faisal I (left) sits next to his brother during a lawn party at the Royal Palace of Baghdad. Many Iraqis mistrusted Faisal, as they thought he was too deferential to the British and suppressed non-Sunni populations.

As British painter Tristram J. Ellis wrote, "All those who are acquainted with the past history of Baghdad, and the glowing descriptions of its buildings and streets in the time of the Caliphs, will think the present city very mean, and it is so, compared with almost any other great Oriental city."