The Tragic Death Of Vladimir Komarov, The Man Who Fell From Space

On April 24, 1967, Soviet cosmonaut Vladimir Komarov tried to return to Earth after a mission on the Soyuz I spacecraft. But then, his parachute failed to deploy. 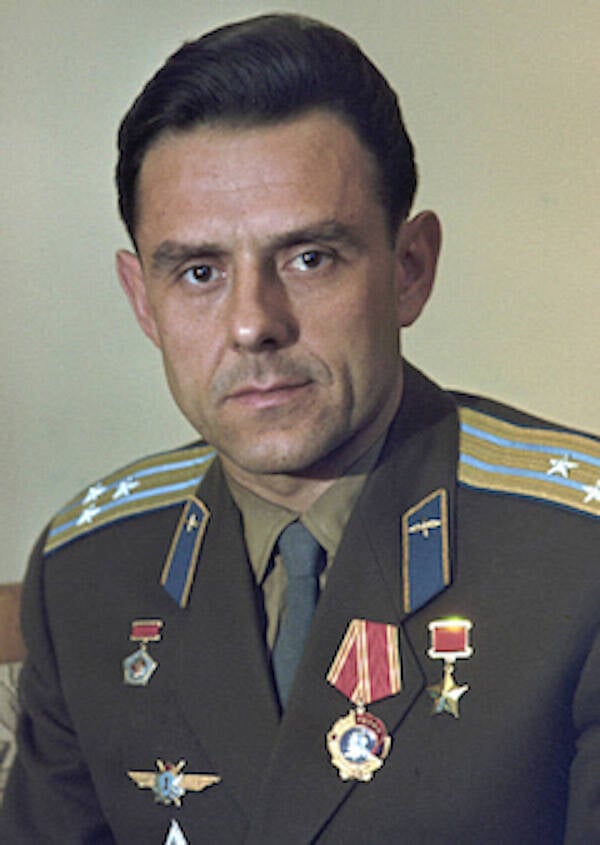 Wikimedia CommonsSoviet cosmonaut Vladimir Komarov in 1964, just a few years before his death.

In life, Vladimir Komarov was an exceptional Soviet cosmonaut. But he would be remembered best for his death — as the “man who fell from space.” In 1967, with the 50th anniversary of the Communist Revolution approaching, Komarov was tapped for a historic space mission. But tragically, it proved fatal.

Although Komarov was well-trained, the Soyuz 1 mission he embarked upon was allegedly rushed. Rumors would later swirl that the spacecraft had “hundreds” of structural problems before it took off — and that at least some high-ranking Soviets deliberately ignored the engineers’ warnings.

However, these claims and others appear in a controversial 2011 book — which is described by historians as being “rife with errors.” While there’s no question that Komarov’s spacecraft had issues, much of his death and the events leading up to it have been shrouded in mystery — thanks in part to questionable accounts but also due to the secrecy of the Soviet Union.

But this much we know: Komarov made multiple orbits around the Earth in his spacecraft, he struggled to reenter the atmosphere once he was done, and he ended up plummeting to the ground — dying in a horrific explosion.

And Vladimir Komarov — the man who fell from space — returned to Earth reduced to a charred, irregular “lump.” While much remains unknown about the events leading up to his demise, there’s no question that his story is a testament to the madness of the Cold War space race — and the price that the Soviet Union paid for progress.

The Cosmonaut Career Of Vladimir Komarov 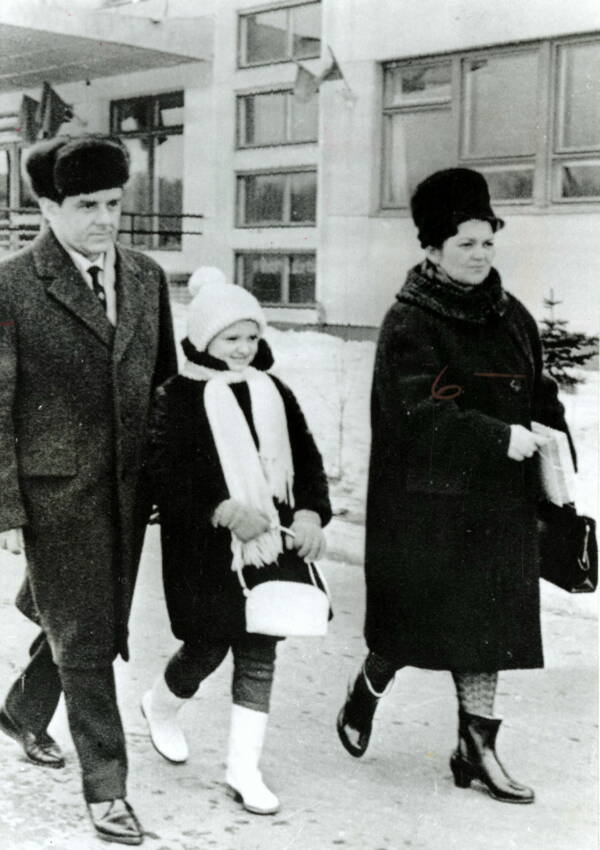 Wikimedia CommonsVladimir Komarov with his wife Valentina and daughter Irina in 1967.

Before he ever dreamt of being a Soviet cosmonaut, Vladimir Mikhaylovich Komarov was a young boy with a passion for flight. Born in Moscow on March 16, 1927, Komarov showed a fascination with aviation and airplanes early on.

Komarov joined the Soviet air force when he was just 15 years old. By 1949, he was a pilot. Around the same time, Komarov met his wife, Valentina Yakovlevna Kiselyova, and rejoiced in his marriage — and his love of flying.

He once remarked, “Whoever has flown once, whoever has piloted an airplane once, will never want to part with either an aircraft or the sky.”

Komarov continued to climb the proverbial ladder. By 1959, he had graduated from the Zhukovsky Air Force Engineering Academy. And before long, he expressed interest in becoming a cosmonaut. As it turned out, he was one of just 18 men initially chosen to train in this field. 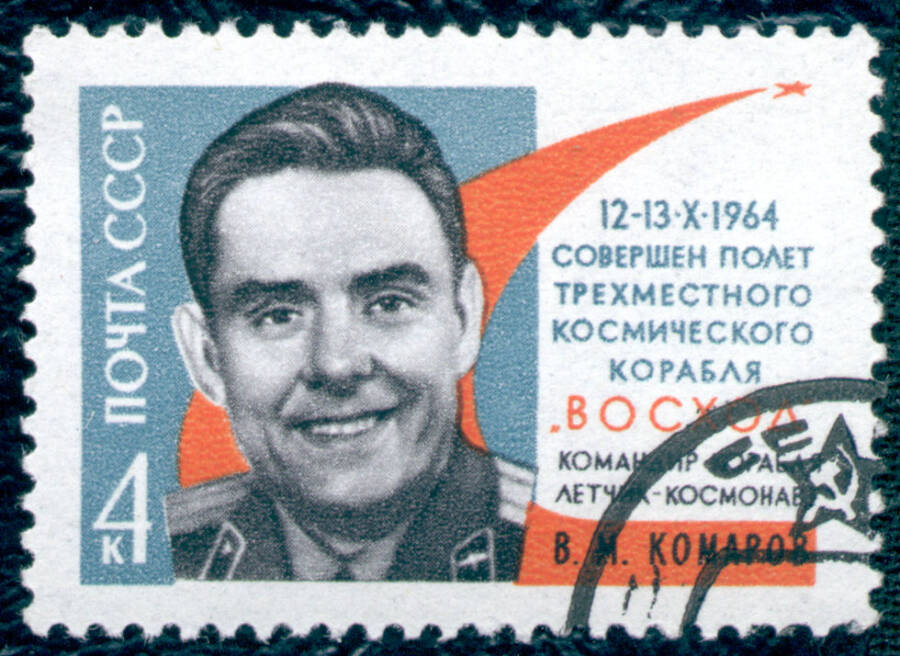 By this point, World War II was becoming a distant memory — and it was clear that outer space had become the next battleground amidst the Cold War. For Komarov, it seemed that the sky was no longer the limit.

In 1964, Komarov distinguished himself by successfully piloting Voskhod 1 — the first vessel to carry more than one person into space. While he wasn’t the first man in space — that honor belonged to fellow Soviet cosmonaut Yuri Gagarin — there’s no question that Komarov was tremendously well respected for his skill and talent.

As the 50th anniversary of the Communist Revolution approached, the Soviet Union was determined to plan something special for 1967. And Komarov seemed to be the perfect man to carry it out.

The Man Who Fell From Space 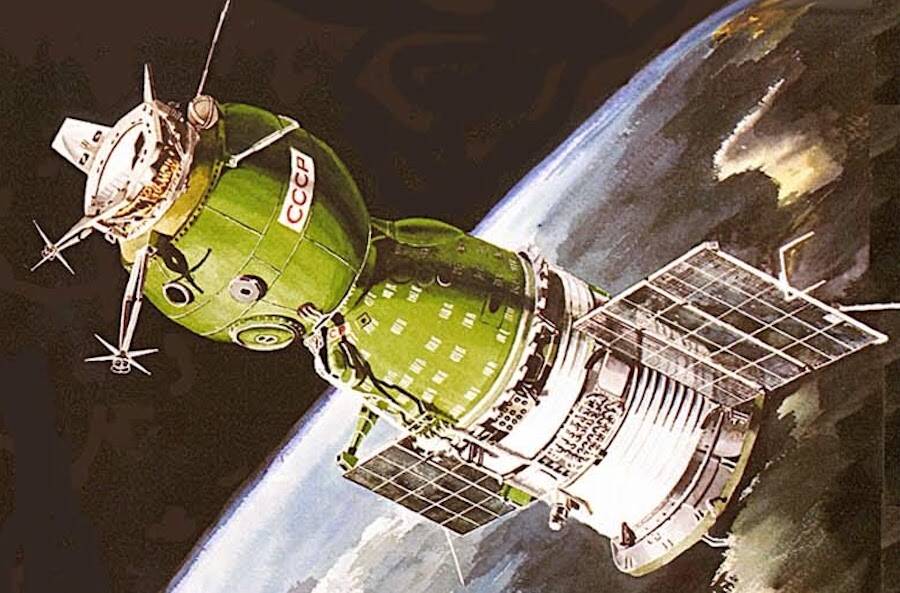 Public DomainIllustration of the Soyuz 1 capsule, the spacecraft Komarov piloted before his tragic crash.

The premise of the mission was rather ambitious: Two space capsules were to rendezvous in low-Earth orbit and Komarov was to park one capsule next to the other. He would then spacewalk between the two crafts.

From there, that’s when the story gets murky. According to Starman — a controversial 2011 book that’s believed to contain many errors — Komarov’s spacecraft Soyuz 1 was riddled with “203 structural problems” that became evident before the flight. (There’s no question that the craft had issues, but it’s unclear how many were spotted early on.)

As Komarov’s backup pilot, Gagarin supposedly argued for the mission to be postponed. He allegedly even wrote a 10-page memo and handed it to Venyamin Russayev, a friend in the KGB. But this memo was ignored.

However, it has not been proven that this “memo” actually existed. If it did, it was not mentioned in any memoirs or official accounts. But either way, as the launch date approached, it seemed like postponement was the last thing on any high-ranking Soviet’s mind.

“The [Soviet] designers faced immense political pressure for a new space spectacular,” wrote Francis French in In The Shadow of the Moon. “Soyuz was being rushed into service before all the problems had been ironed out.” 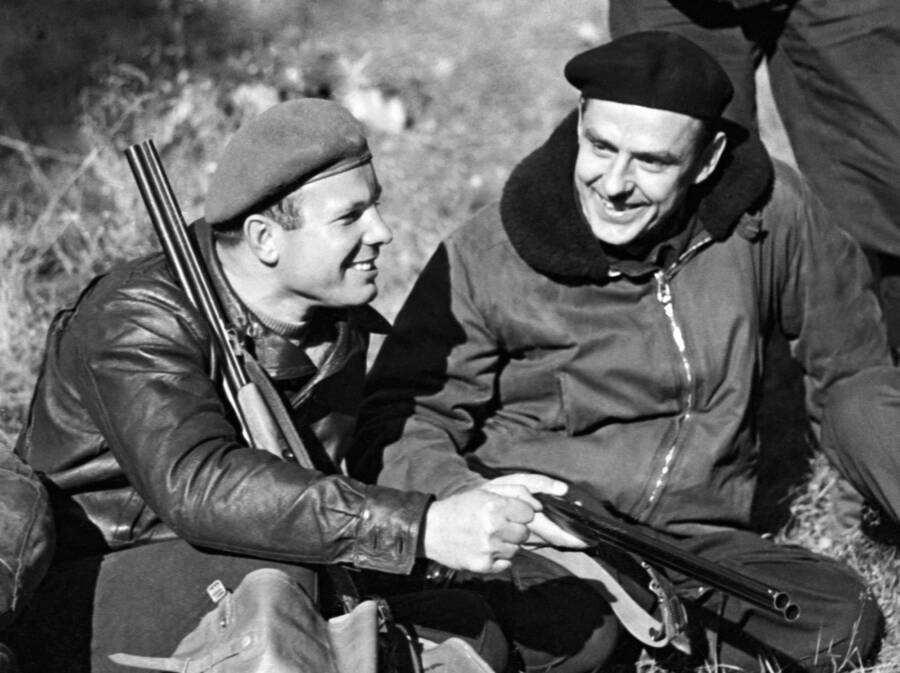 In Starman‘s dramatic retelling, Komarov was certain that he would die if he went on the mission, but refused to step down in order to protect Gagarin — the backup pilot who at that point had become his friend.

But according to experts, Gagarin was likely a “backup” in name only. Since he had already achieved the coveted honor of being the first man in space, he was seen as a national treasure of sorts. So at that point in his career, officials would be extremely hesitant to send him on any mission that was risky. But they were apparently willing to risk sending Komarov.

On April 23, 1967, Komarov took off on his ill-fated space journey. Over the course of 24 hours, he was able to orbit the Earth 16 times. However, he was unable to complete the end goal of his mission.

This was because one of his two solar panels that supplied energy for the maneuver failed to deploy. Soviets apparently canceled the launch of the second module and then instructed Komarov to come back to Earth.

But little did Komarov know reentry would prove fatal. 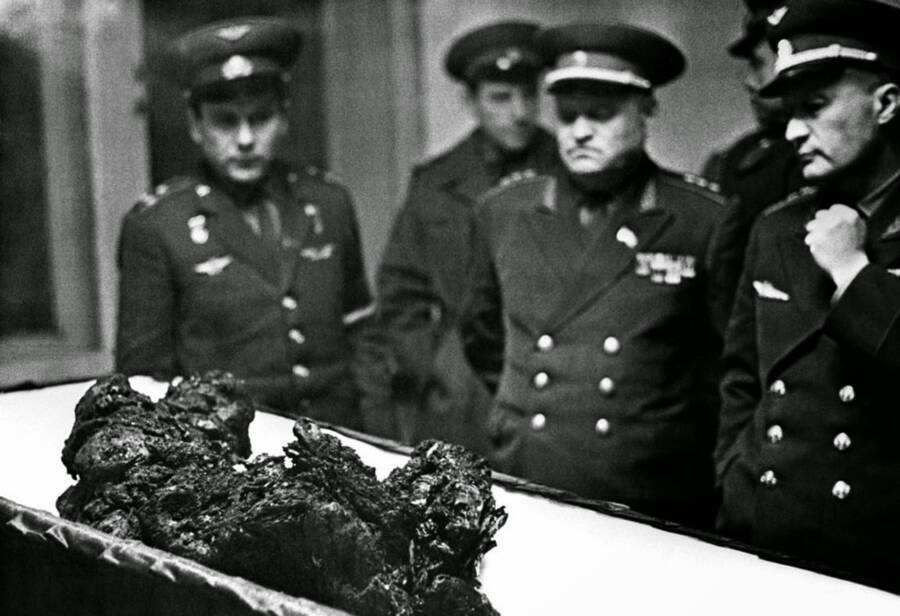 Despite Komarov’s skill, he had difficulty handling his spacecraft and apparently had trouble firing his rocket brakes. It took two more trips around the world before he was finally able to reenter.

Tragically, when he reached an altitude of 23,000 feet, his parachute that was supposed to deploy failed to do so. As it turned out, the lines of the chute had gotten tangled during Komarov’s reentry troubles.

And so on April 24, 1967, Komarov plummeted to the ground and was killed in a devastating explosion — making him the first known man to die in spaceflight. His final moments are perhaps the most mythologized of all.

As Starman claims, Komarov was filled with rage as he died, saying, “This devil ship! Nothing I lay my hands on works properly.” And if the book is to be believed, he even went so far as to curse the officials who put him on such a “botched spaceship” in the first place.

Meanwhile, many experts are skeptical of this — including space historian Robert Pearlman.

“I simply don’t see that as being believable,” said Pearlman.

“We have the transcripts from the flight, and that hasn’t been reported to date. Komarov was an experienced cosmonaut with training as a tech pilot and Air Force officer. He was trained to deal with high-pressure environments. The idea that he would have lost it is just distasteful.”

According to the official transcript of Komarov’s final moments (from the Russian State Archive), one of the last things he said to colleagues on the ground was this: “I feel excellent, everything’s in order.” Moments later, he said, “Thank you for transmitting all of that. [Separation] occurred.”

While those were the last official quotes recorded, it’s not unreasonable to think that Komarov may have uttered something else after losing connection with people on the ground. It’s not clear what that would’ve been, but surely he must’ve felt some emotion upon realizing that he was going to die.

The real answer died with Komarov — whose charred remains resembled an irregular “lump.” According to reports, only his heel bone was recognizable.

The Legacy Of Vladimir Komarov 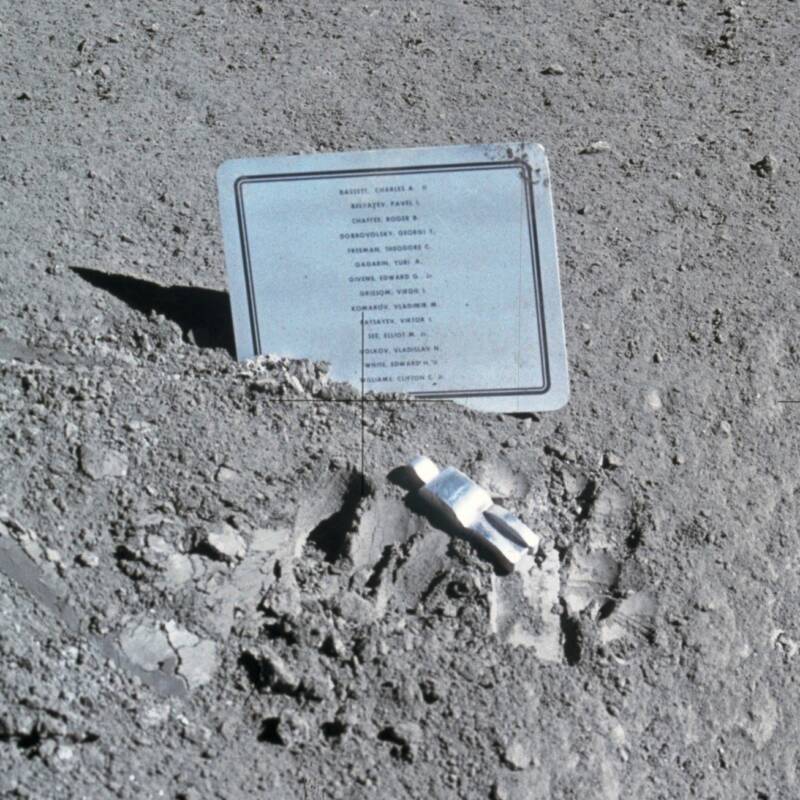 Wikimedia CommonsA commemorative plaque and “Fallen Astronaut” sculpture left on the Moon in 1971, honoring Vladimir Komarov and 13 other USSR cosmonauts and NASA astronauts who died.

While it’s unknown exactly how outwardly furious Komarov was over his own death, it is clear that Gagarin was very angry afterward. Not only was he upset that his friend was gone, but he was also likely plagued with survivor’s guilt in the aftermath of the disaster.

Gagarin may have also felt that Komarov’s death could’ve been prevented — if his mission hadn’t been so rushed to commemorate a certain occasion.

That said, the man who fell from space probably knew that there was a chance that he might not come back to Earth alive. Not only was space travel relatively new, his spacecraft was rushed and it was entirely possible that those preparing it felt more pressure to launch it than to perfect it. And yet, Komarov still climbed aboard.

Already seen as a national hero in life, Komarov was perhaps even more revered in death. Numerous Soviet officials gazed upon his charred remains before cremating the fallen cosmonaut, even though there wasn’t much left of him to see. Komarov’s remains were later entombed in the Kremlin.

There’s no question that Komarov died a horrific death as the “man who fell from space.” However, like many events that happened in the days of the Soviet Union, much of the story remains shrouded in mystery.

While some might be tempted to believe the astonishing tale told in Starman, many experts believe this account is inaccurate — especially since it relies almost entirely on an untrustworthy former KGB officer named Venyamin Russayev.

But despite the murkiness of the story, there are some facts that are undeniable. Komarov was a talented pilot, he climbed into a capsule that was faulty, and he paid the ultimate price during the space race.

After learning about Vladimir Komarov and Soyuz 1, learn the disturbing story of Soyuz 11. Then, see 33 harrowing images from the Challenger disaster.