The full story behind the hotly-debated deaths of the men aboard Soyuz 11. 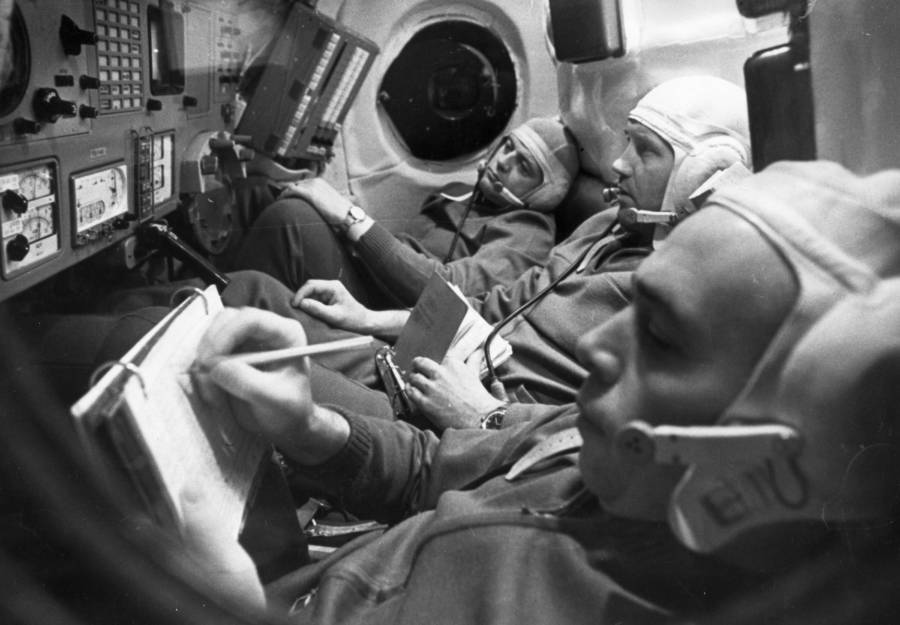 Sovfoto/UIG via Getty ImagesThe crew of the Soyuz 11 mission (left to right: Vladislav Volkov, Georgi Dobrovolski, and Viktor Patsayev) on the day of the launch, June 6, 1971.

June 30, 1971. The Soviet retrieval team anxiously awaits the return of the Soyuz 11 cosmonauts in a remote region of Kazakhstan. A nearby recovery helicopter spots the scorched parachute of the spacecraft’s descent module as it plummets toward Earth. After making their way to the crashed module, the would-be rescuers open the hatch and reveal a gruesome discovery: the dead bodies of cosmonauts Georgi Dobrovolski, Vladislav Volkov, and Viktor Patsayev.

By all accounts, until that moment, the Soyuz 11 mission had gone perfectly. The team had spent more than 23 days in orbit, during which time they had occupied history’s first space station.

Their successful mission would stand as a triumphant rebuttal to the U.S. accomplishment of putting a human on the moon. The Soviets would regain the international fame they had not enjoyed since the historic launch of Sputnik (history’s first artificial satellite) on Oct. 4, 1957.

However, these hopes dissolved into infamy in 1971, as the Soyuz 11 cosmonauts and would-be heroes all returned to Earth dead.

The sudden and untimely deaths of these three cosmonauts quickly became the subject of intense debate. Tom Stafford, the chief of NASA’s astronaut corps, believed that the physiological stress of their long flight is what caused the cosmonauts’ demise. NASA physician Chuck Berry theorized that it was not a physiological cause, but that a toxic substance of some kind found its way into the descent module.

However, the United States would not learn the official cause of why the Soyuz 11 cosmonauts died until The Washington Post reported on the mission in October 1973.

Ultimately, the conclusion was that a ruptured breathing valve caused the men to die of decompression, which is the result of a sudden, large drop in air pressure, causing the air in your lungs to expand and tear the delicate tissue of the vital organs. Decompression also vaporizes the water in the soft tissues of your body, thus producing a certain amount of swelling. The continued leakage of gas and water vapor would lead to a dramatic cooling of the mouth and airways. The water and dissolved gas would create bubbles that impede blood flow.

After 60 seconds, blood circulation would come to a stop, your brain would be starved of oxygen, and you would fade into unconsciousness.

What the Soyuz 11 cosmonauts experienced in their final moments would not have been a painless end. The unexpected drop in pressure would have exposed them to the vacuum of space.

Although the official autopsies from the Burdenko Military Hospital remain classified, it is not difficult to surmise what symptoms they would have undergone. First, they would have felt an intense pain in their chest, abdomen, and head. Then their eardrums would have ruptured, and blood would have begun spilling out of their ears and mouths. During this, the men would have remained conscious for about 60 seconds.

With the men dead, Soyuz 11’s impeccable landing was completely automatic, as the capsule ran a programmed re-entry with no need for living pilots. Their deaths transpired 104 miles above the atmosphere, cementing their status as the only human beings to have ever died in space.

After this look at the Soyuz 11 disaster, check out 29 interesting space facts that prove Earth is boring. Then, take a wondrous look at 21 amazing pictures of Earth from space.