The History of Voting in America

Following the Supreme Court’s decision on the 2013 Shelby v. Holder case–which withdrew the requirement that jurisdictions with a history of discrimination against minority voters get approval from the feds before changing voting laws–and the subsequent addition of voter identification laws in many states, it appears that even as we make new leaps toward equality we’re going backward when it comes to voting rights. But that’s nothing new.

In the Oxford Companion to American Law, Grant M. Hayden explains: “The history of voting in the United States has not been characterized by smooth and inexorable progress toward universal political participation. It has instead been much messier, littered with periods of both expansion and retraction of the franchise with respect to many groups of potential voters.” 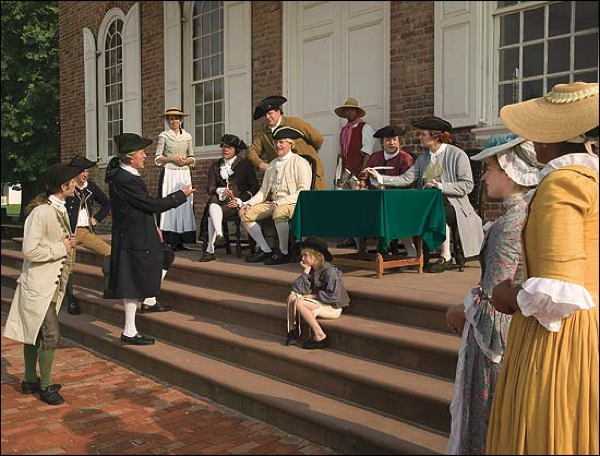 A reenactment of an election day from the pre-Revolutionary period at Colonial Williamsburg, Virginia
Source: History

When America was still a collection of British colonies, voting was extremely restricted. Only property-owning white men could vote, which left out women, poor white men, slaves and free blacks, Native Americans, and in some cities, Jews and even Catholics. So it boiled down to wealthy white Protestant men electing other wealthy white Protestant men to office. Even though the current Congress is the most diverse in US history, the vast majority of members are still wealthy white Protestant men. All but two of our presidents fit that bill as well, the exceptions of course being Barack Obama, who is half black, and John F. Kennedy, who was Catholic. 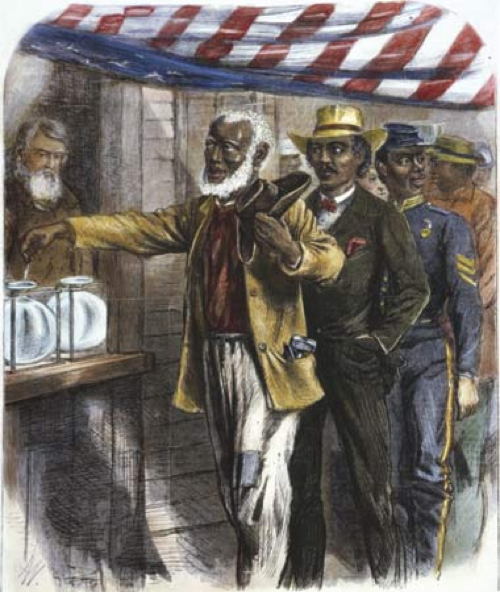 After the Civil War, voting rights began to change. The Civil Rights Act of 1866 granted citizenship but not voting rights to all who were born in the United States. It wasn’t until 1869 that Congress got around to giving black men the right to vote. And they voted in droves. Black men ran for and held office, too, supported by the federal government’s passage of the Reconstruction Acts of 1867. This period of Radical Reconstruction lasted a decade. The new arrangement did not go over well with many white Southerners who, after generations of slave-owning, could not fathom and were not willing to be ruled by a black man. The stripping of blacks’ voting rights began. 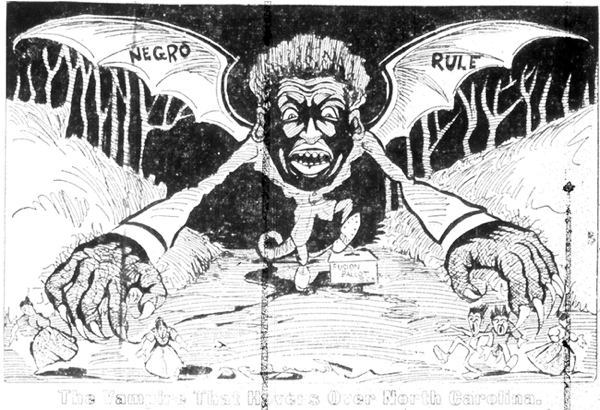 A real political cartoon from the the Raleigh, North Carolina News and Observer, September 27, 1898
Source: US History Scene

In 1896, Louisiana passed a law disallowing any former slave or descendant of slaves to vote. Think about that for a second. That described nearly all black people in the country at that time. Not surprisingly, the percentage of registered black voters in Louisiana fell from 44.8% in 1896 to just 4% in 1900. Several other southern states passed similar “grandfather clauses.” 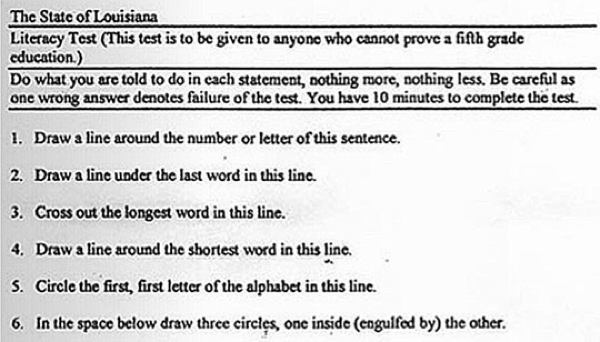 A real literacy test given to blacks who attempted to vote in Louisiana in the 1940s
Source: American Civil Liberties Union

Meanwhile, for much of the nineteenth century, an ever-growing group of women were working to gain the right to vote. A pamphlet from the era, published by the National Association Opposed to Woman Suffrage, lists arguments against it, including: “Because 80% of the women eligible to vote are married and can only double or annul their husband’s votes.

Because in some States more voting women than voting men will place the Government under petticoat rule. Because it is unwise to risk the good we already have for the evil which may occur.” Women finally landed the vote in 1920. For more on the women that struggled for suffrage, read our article on the subject.

By 1940, Jim Crow laws were deeply entrenched. The name comes from an 1828 minstrel routine called “Jump Jim Crow” by Thomas Dartmouth “Daddy” Rice, a white man who performed in blackface. Eventually, the term was used to describe racial segregation, which began after the official end of Reconstruction in 1877. In the 1940s, the time when blacks held office had long been forgotten. Literacy tests like the one above were used to keep blacks from voting. Even though it reads, “This test to be given to anyone who cannot prove a fifth grade education,” whites weren’t asked to prove a thing when heading to the polls. Poll taxes were another way to keep the overwhelmingly poor black community from casting their ballots.

Frustrated by the perseverance of segregation, alienation and lack of opportunity in a supposedly “free and equal” society, the Civil Rights Movement kicked off in the 1950s. Using nonviolent protests like sit-ins and marches, activists sought to put an end to segregation and voter discrimination laws throughout the South.

Led by the Rev. Dr. Martin Luther King, Jr., in the 1960s the Southern Christian Leadership Conference took trips to southern cities to register black voters. In March 1965, he was among the protesters that tried three times to march from Selma to Montgomery, Alabama. Police blocked their path the first time. The second time, by order of the governor, state troopers reacted with violence to the peaceful march, attacking the marchers with billy clubs and tear gas while white bystanders cheered. It was international news and became known as Bloody Sunday. The National Guard was called in to protect them and on their third try, they completed the trek to Montgomery.

The world saw what was going on in the South, so the pressure was on Congress to take action. The Voting Rights Act was passed later that year and signed into law by Lyndon Johnson. Disturbing footage of Bloody Sunday may be seen below.

Four presidents have signed extensions to the Voting Rights Act (VRA): Richard M. Nixon, Gerald Ford, Ronald Reagan, and in 2006, George W. Bush. Since it was written, the VRA has traditionally been a bipartisan issue. But something changed in the last few years. Many states, most in the South but some in the Midwest, have applied to make changes in voting laws and have been turned down by the Department of Justice (DOJ).

Voter ID laws are by far the most popular changes being made, even though they’re a modern-day version of a poll tax, and fears of voter fraud are more apocryphal than they are based in reality. Nevertheless, the Supreme Court made the jaw-dropping decision to tear a chunk out of the VRA: Section 5, which is what gives the DOJ their power to shoot down bad state voting laws. Their decision means that the DOJ no longer has the right or ability to clear proposed voting laws before states enact them.

Many red (read: Republican-run) states have taken advantage of this ruling by putting in place a slew of voter ID laws. All these do is disenfranchise the poor, the young, minorities, and the elderly, four groups that are most likely to vote Democrat. No matter what side of the aisle you’re on, no one should stand for this. You don’t have to take my word for it; let Lewis Black tell it like it is: