25 Heartbreaking Wartime Goodbyes Of Decades Past

From World War I to World War II and beyond, this is what a kiss looks like when both people know it could be their last. 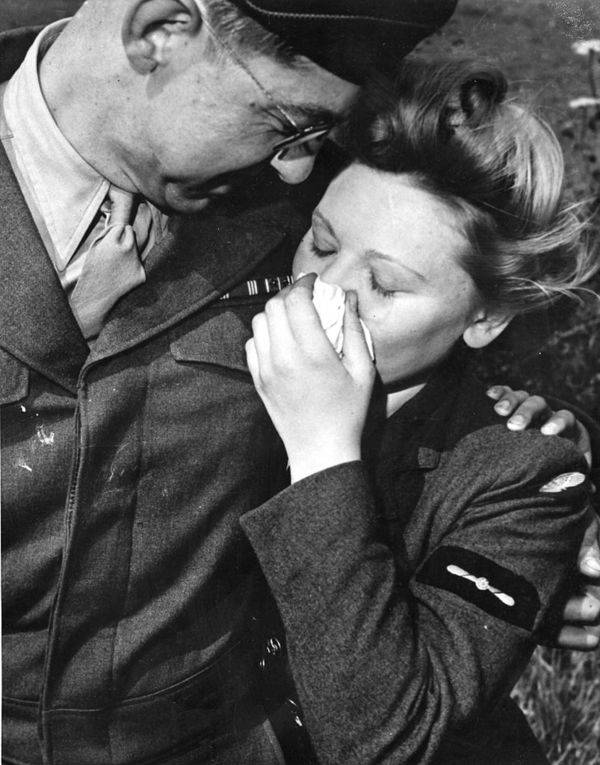 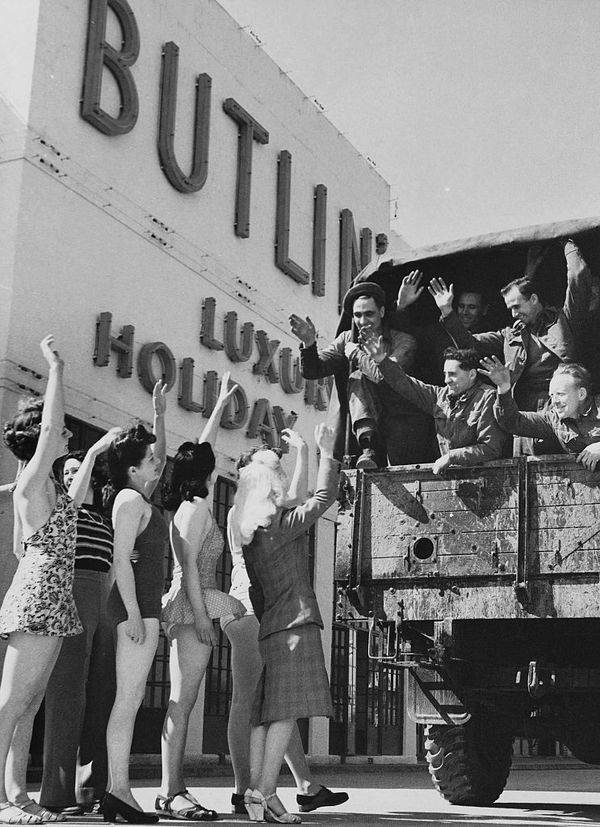 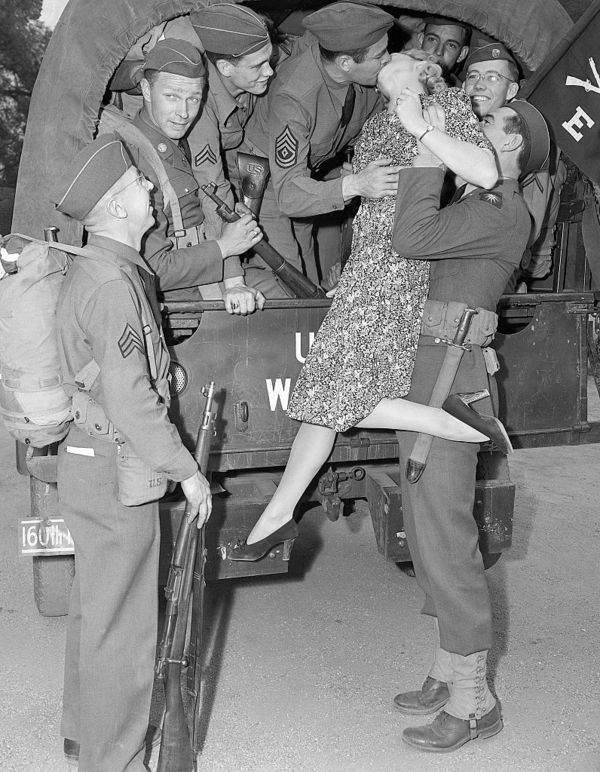 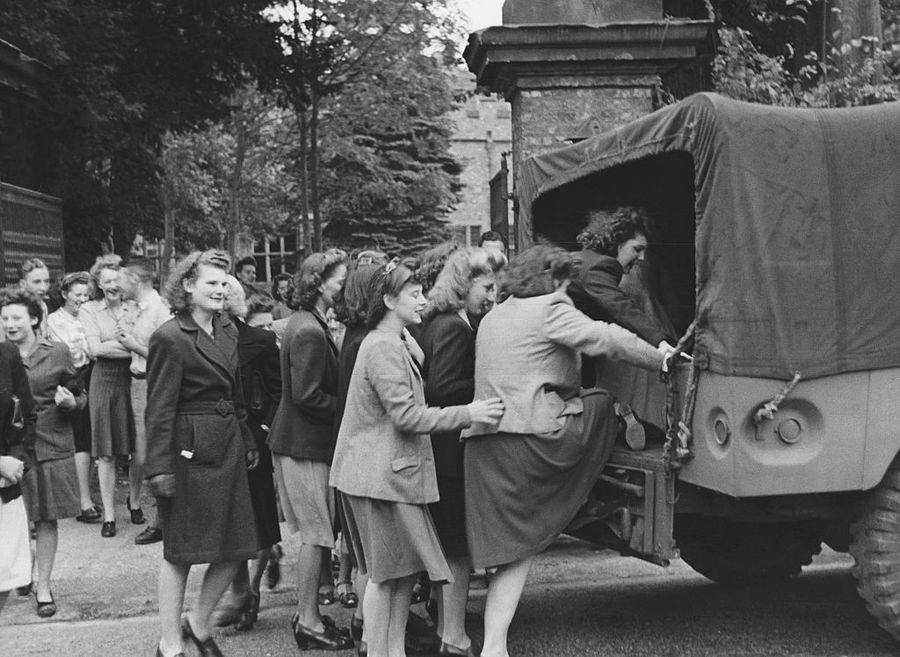 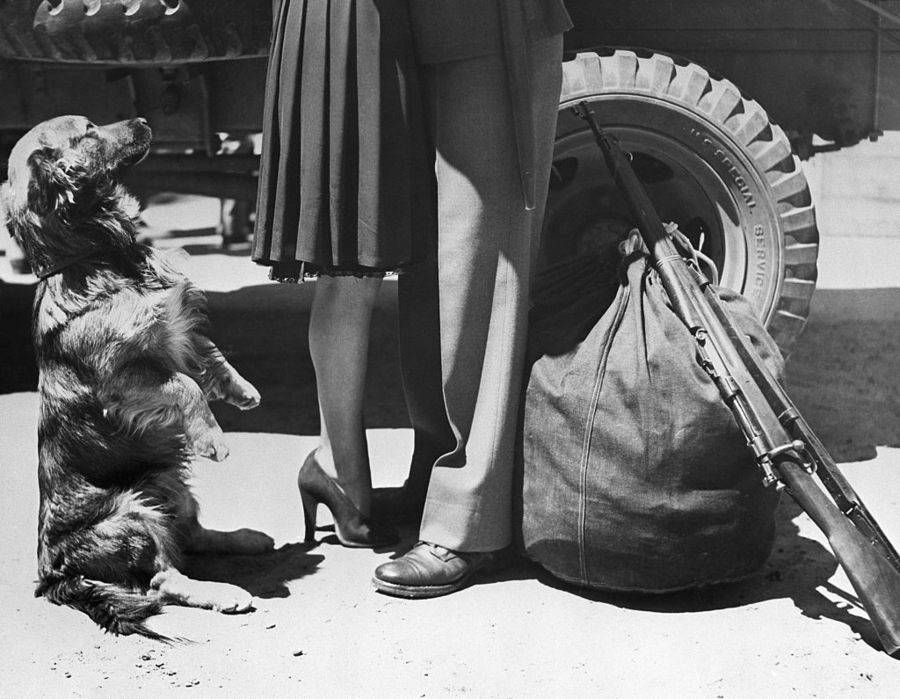 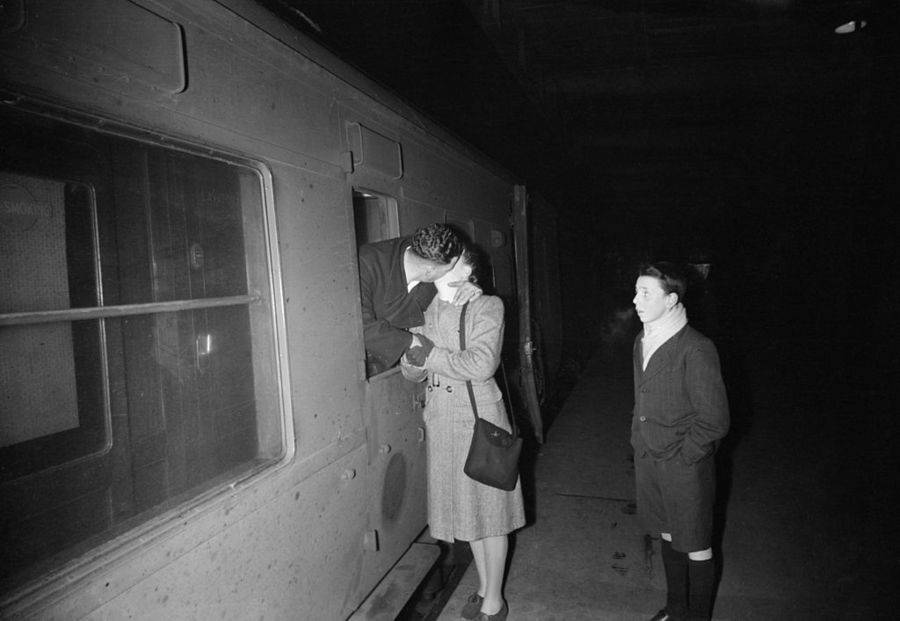 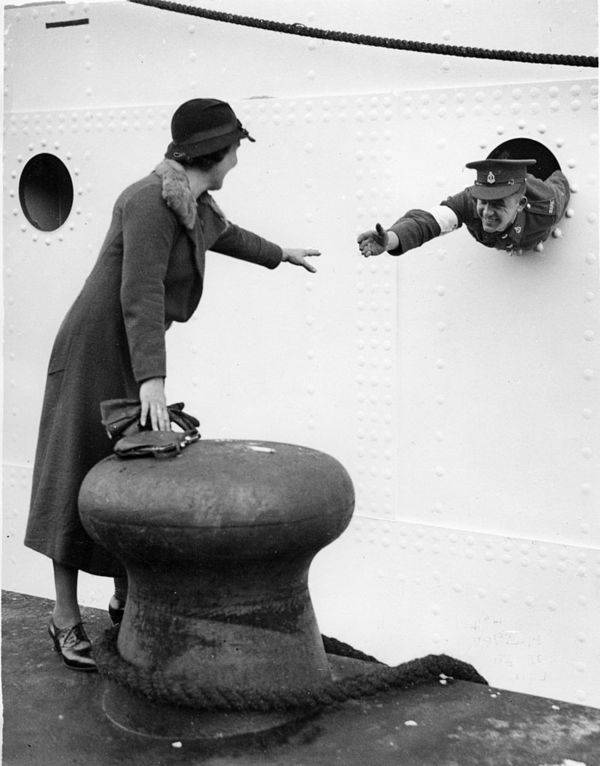 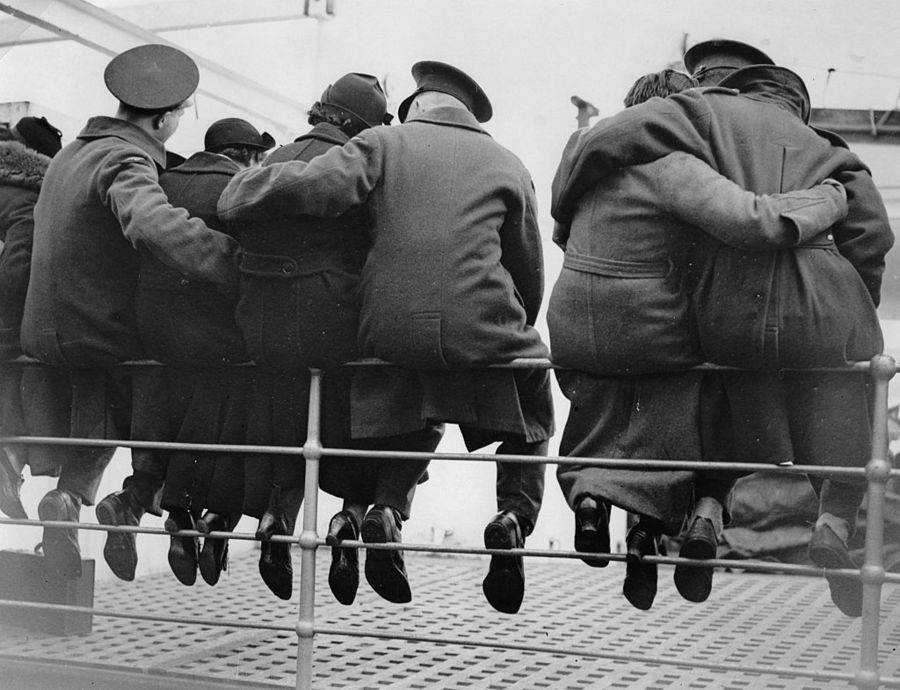 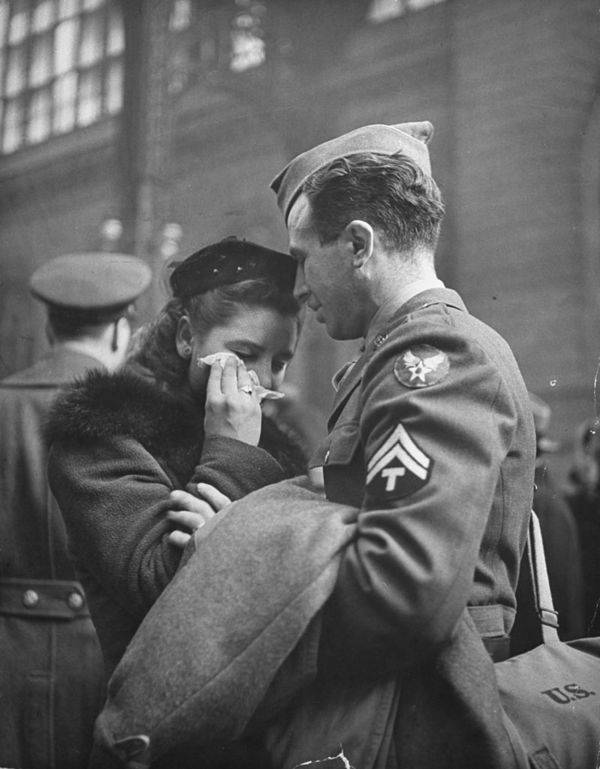 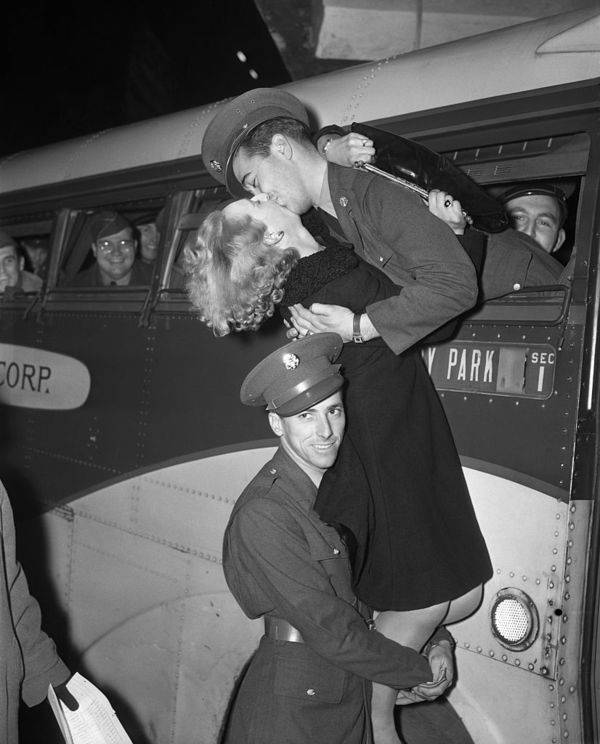 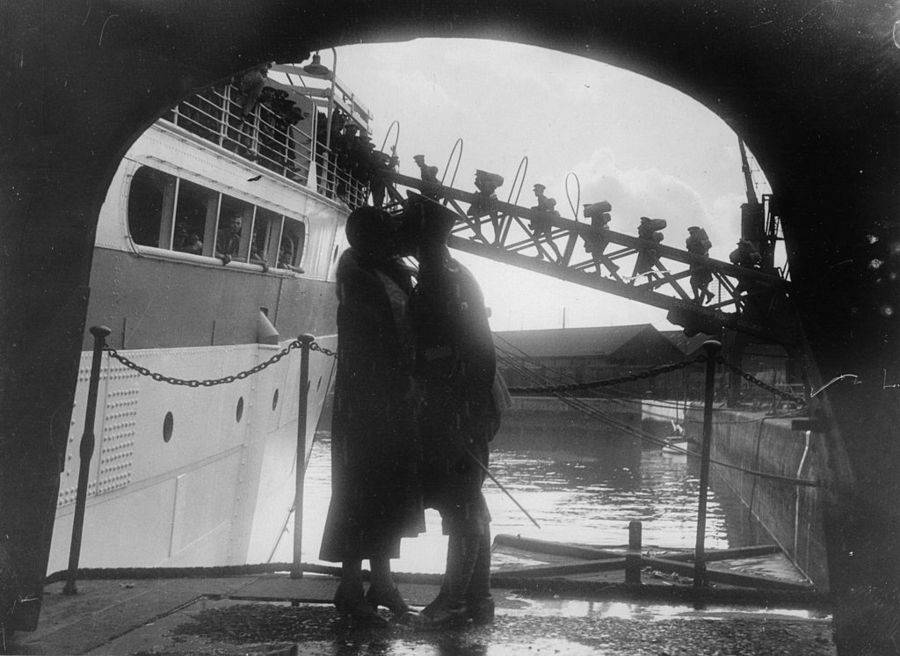 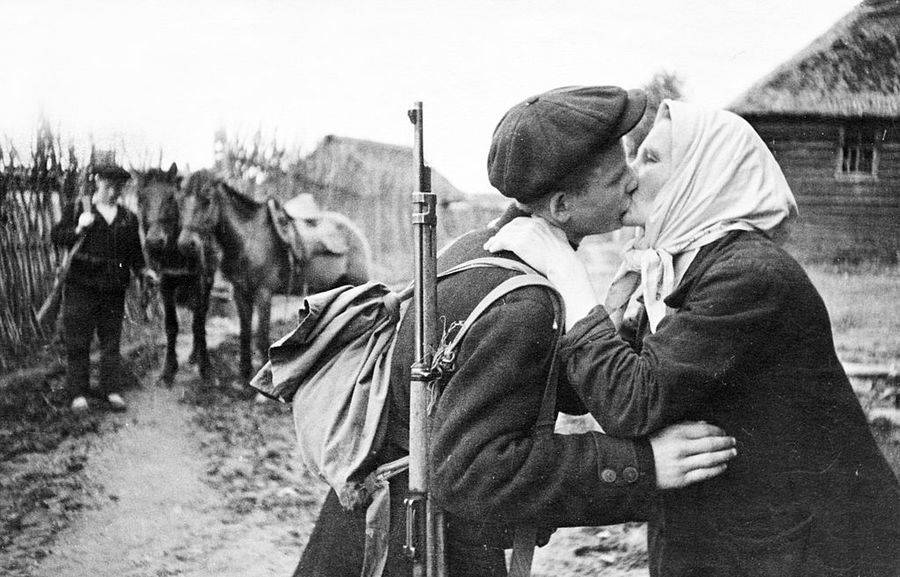 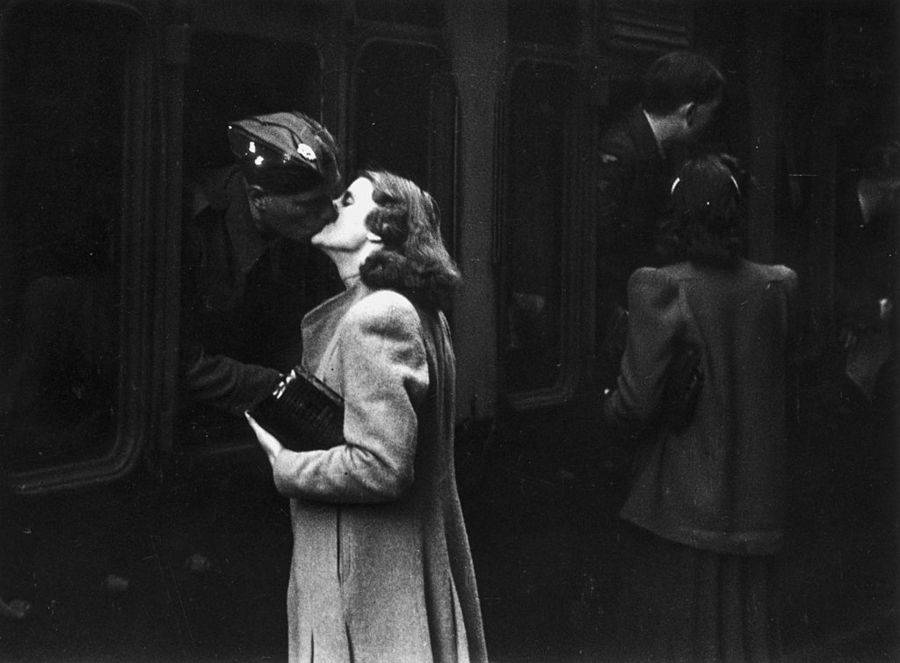 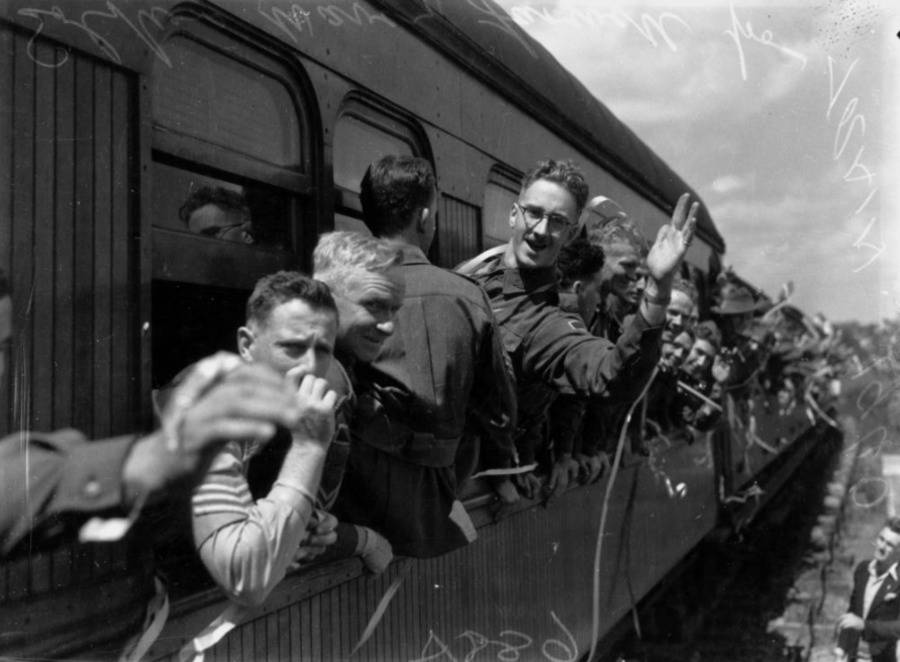 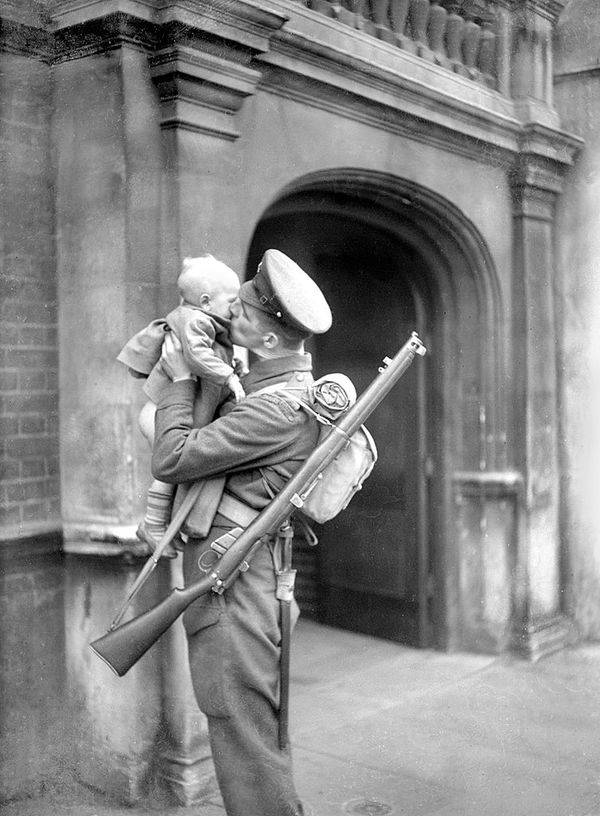 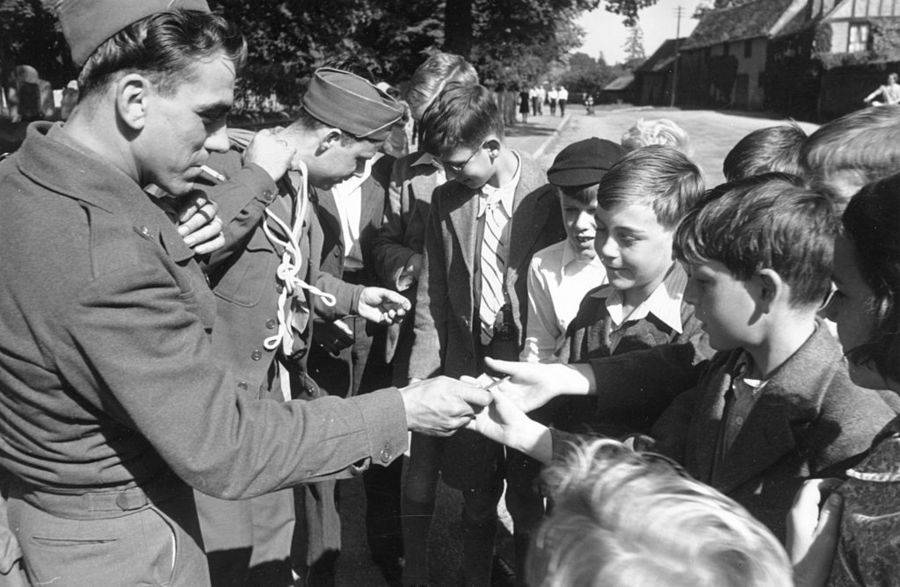 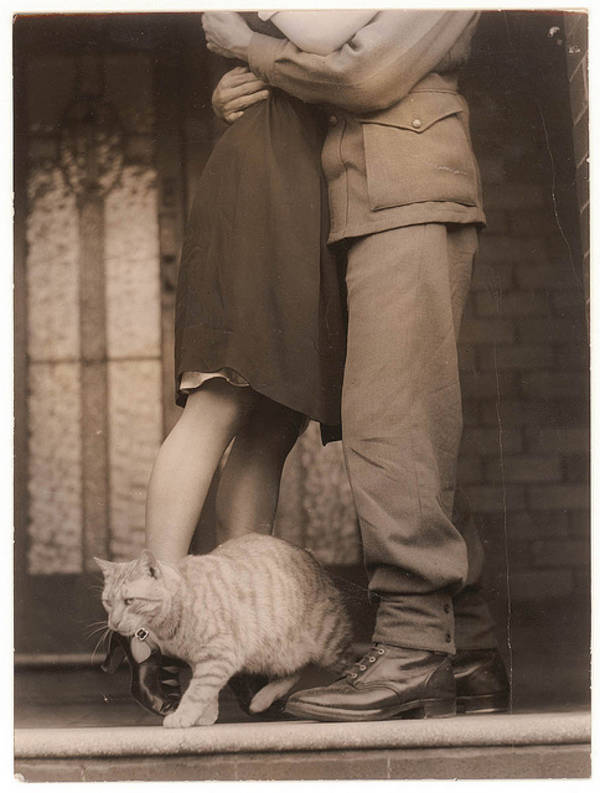 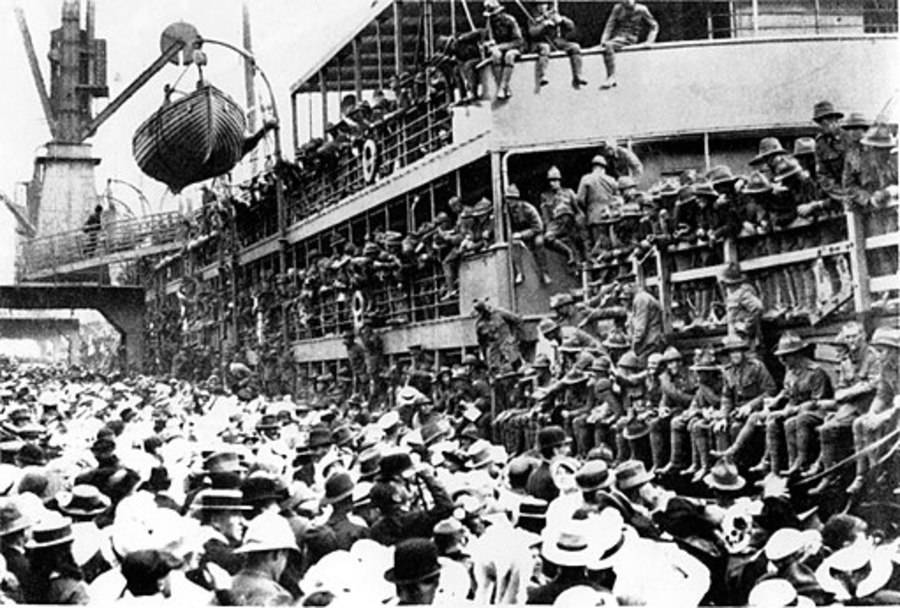 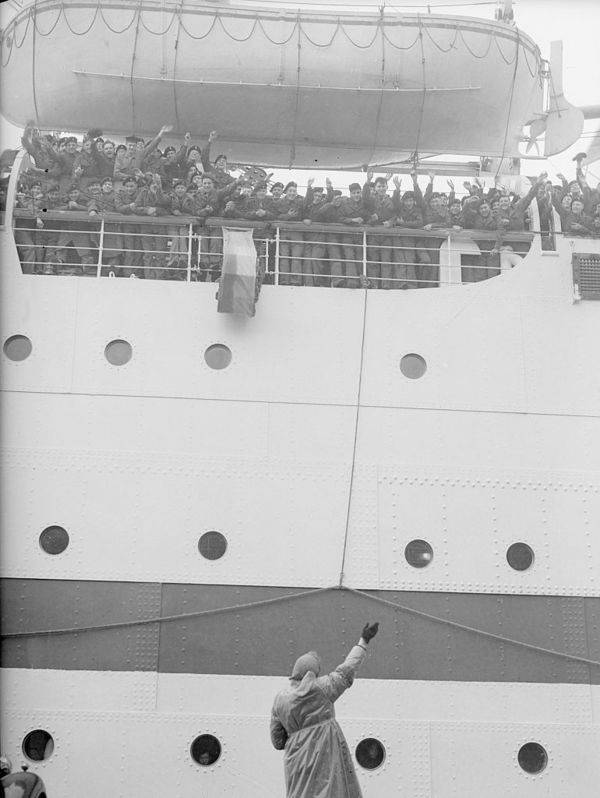 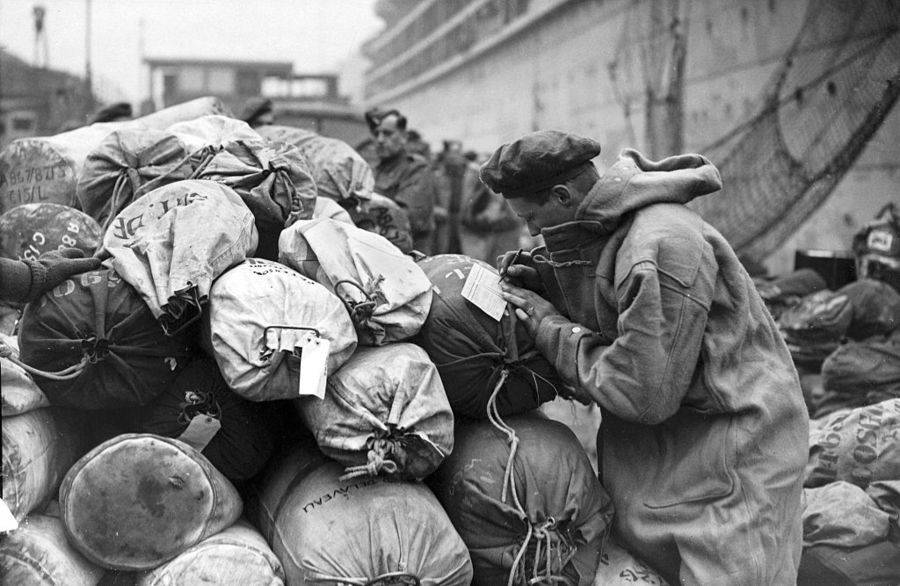 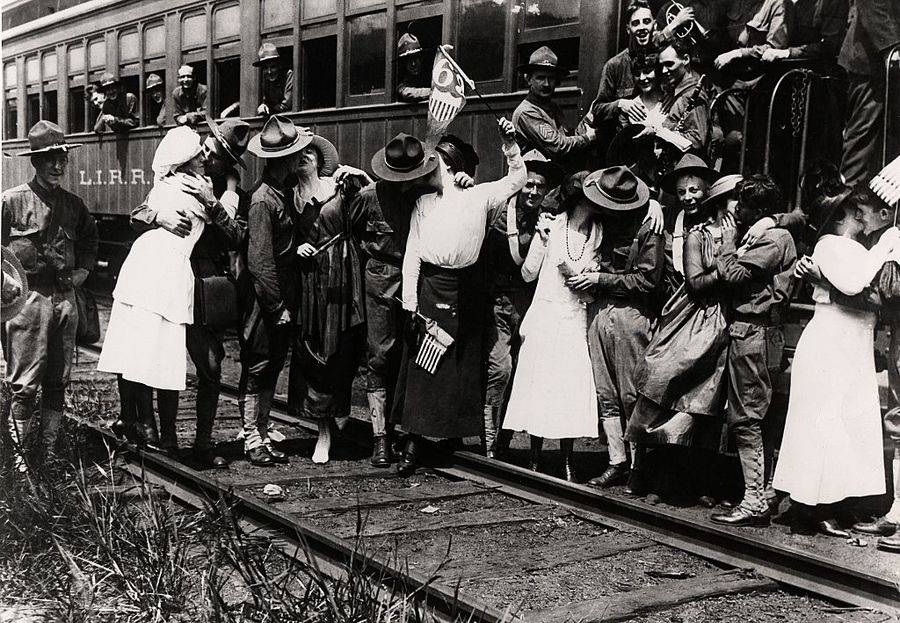 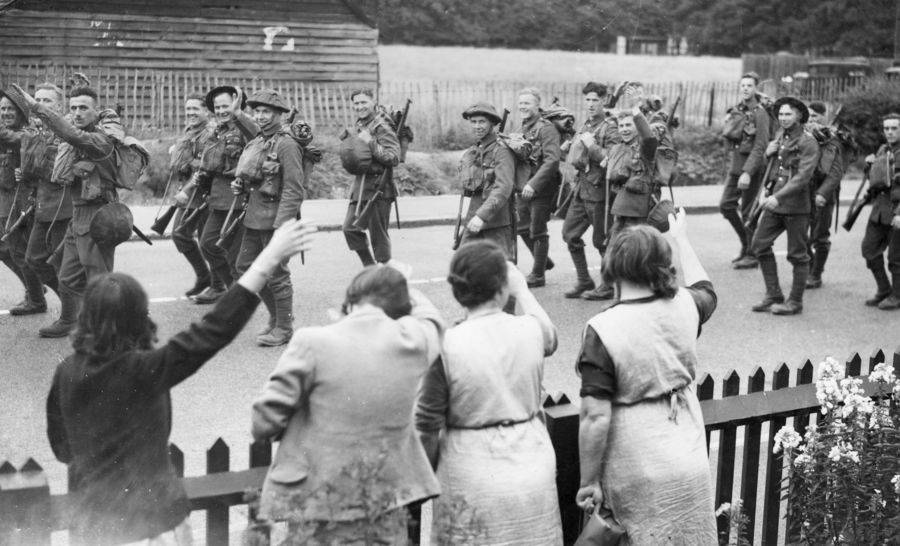 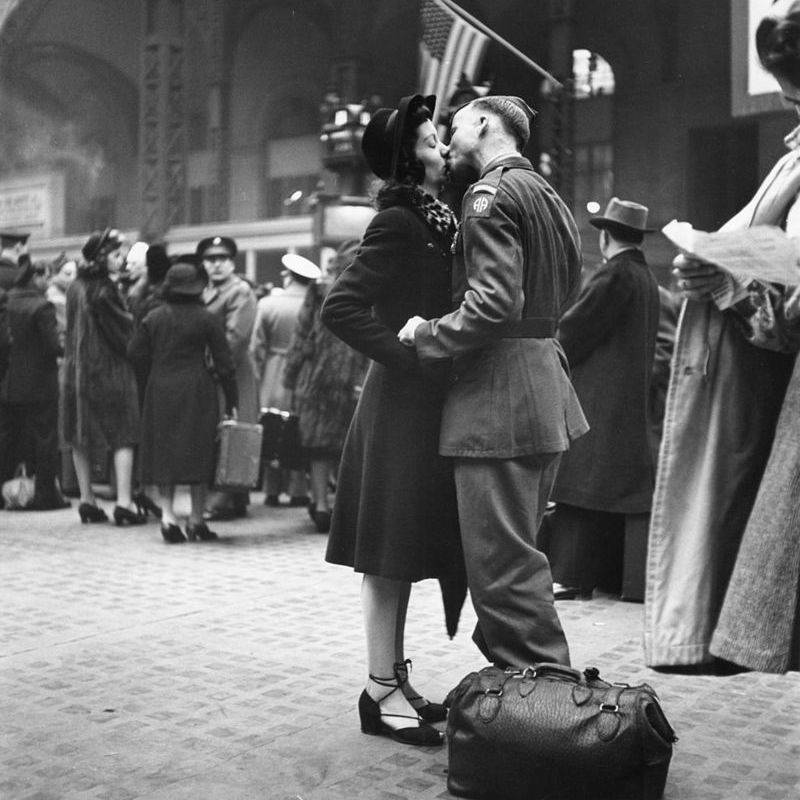 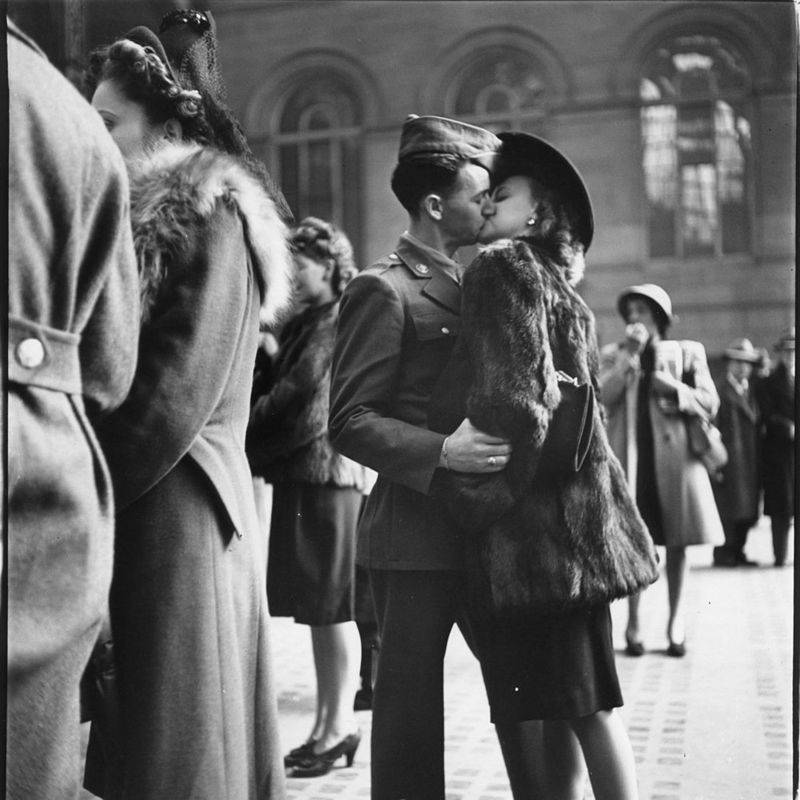 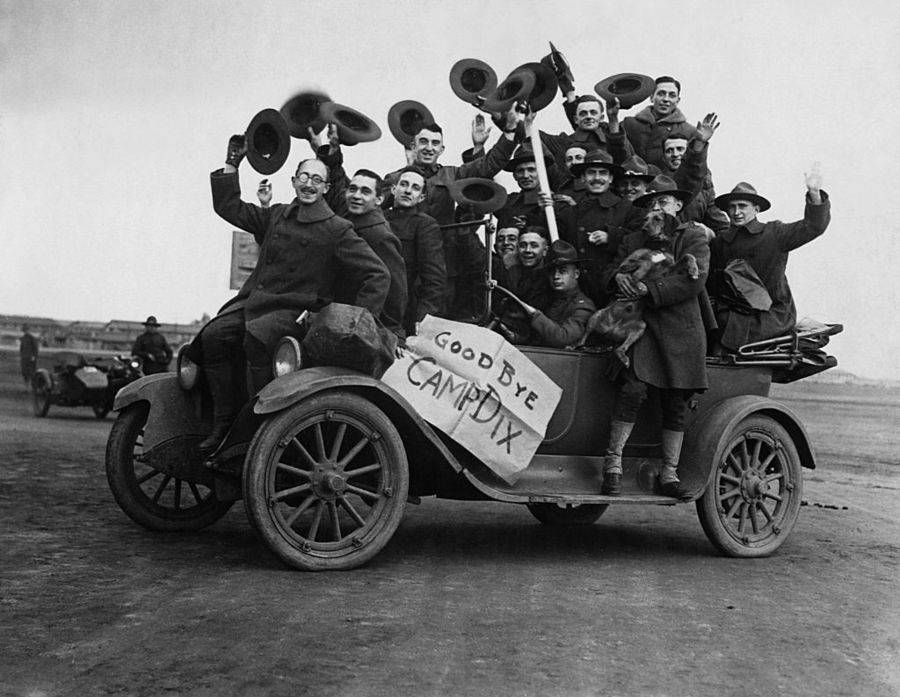 1 of 26
British Leading Aircraftswoman Dorothy Hall, says a tearful goodbye to American soldier Sgt. John A. Babcock of the 8th Air Force before the later returned to the United States. England. 1945.PhotoQuest/Getty Images
2 of 26
Early holiday-makers to Butlin's Camp at Clacton, England wave goodbye to the last of the troops leaving the camp in 1946 Hulton-Deutsch Collection/CORBIS/Corbis/Getty Images
3 of 26
A woman kissing a soldier goodbye before leaving for WWII in 1941. Location unspecifiedBettmann/Getty Images
4 of 26
Girls board a truck to go to a last dance with American soldiers. Location and date unspecifiedHulton-Deutsch Collection/CORBIS/Corbis/Getty Images
5 of 26
A man, his girl, and his dog stage a poignant farewell scene in Washington. 1942.Bettmann/Getty Images
6 of 26
At London's King's Cross station, a serviceman leans out of a train window to kiss his lover goodbye at the end of a period of leave. 1944.Ministry of Information Photo Division Photographer/ IWM/Getty Images
7 of 26
Soldier of the British Coldstream-Garde says goodbye to his wife in 1935. Location unspecified.Imagno/Getty Images
8 of 26
English soldiers say goodbye to their wives in 1937. Troops heading for Egypt. Location unspecified.Imagno/Getty Images
9 of 26
Soldier consoles his weeping wife in 1944 as he says goodbye at Pennsylvania Station before returning to duty after brief furlough during WWII.Alfred Eisenstaedt/Pix Inc./The LIFE Picture Collection/Getty Images
10 of 26
A soldier's girl kisses the boy goodbye in a 34th Street bus terminal, while another soldier cooperates by holding her up to reach him. New York. 1941.Bettmann/Getty Images
11 of 26
Goodbye kiss of a marine soldier at the pier of Southampton Docks in England. 1933.Imagno/Getty Images
12 of 26
A Russian partisan in the Leningrad region kisses his mother goodbye before leaving with his detachment to fight in WWII. Date unspecified.Sovfoto/UIG/Getty Images
13 of 26
A soldier leans out of a carriage window to kiss his wife goodbye at Paddington station in London. 1942.Bert Hardy/Picture Post/Getty Images
14 of 26
Soldiers wave farewell from a train. Brisbane, Australia. 1940.Wikimedia Commons
15 of 26
A fond farewell for this little boy from a guardsman who is returning to duty after leave. London. 1941.Planet News Archive/SSPL/Getty Images
16 of 26
Two American soldiers say goodbye to local children with their last sticks of chewing gum. Buckden, England. 1945.Francis Reiss/Getty Images
17 of 26
A soldier's goodbye to his lover and to Bobby the cat. Location unspecified. Circa. 1939-1945.Sam Hood/ State Library Of New South Wales/Flickr Commons
18 of 26
The Main Body of the New Zealand Expeditionary Force (NZEF) leaves Wellington on October 16, 1914.Archives New Zealand/Wikimedia Commons
19 of 26
Mrs. Buggins waves off her son as his troopship sails for the far east. Location unspecified. April 30, 1953.Daily Mirror/Mirrorpix/Mirrorpix/Getty Images
20 of 26
Soldier writes a farewell card home. Location unspecified. 1944.Daily Mirror/Mirrorpix/Mirrorpix/Getty Images
21 of 26
Women say goodbye to the 69th regiment soldiers in Washington, D.C. during World War I. CIrca 1917-1918.Photo12/UIG/Getty Images
22 of 26
Women wave goodbye to troops, as they march off to WWII. England. 1939.Chris Ware/Keystone/Getty Images
23 of 26
A couple in New York's Penn Station share a farewell kiss in 1943 before he ships off to war during WWII.Alfred Eisenstaedt/The LIFE Picture Collection/Getty Images
24 of 26
Another couple in Penn Station in 1943 kiss goodbye before the man ships off to war during WWII.Alfred Eisenstaedt/The LIFE Picture Collection/Getty Images
25 of 26
Soldiers packed into a car wave goodbye to Camp Dix upon their mustering-out at the end of World War I in 1918.CORBIS/Corbis/Getty Images
26 of 26 Saying goodbye to your loved one is difficult at the best of times, but saying goodbye when one has to go fight in a war can be close to impossible. Yet countless people have indeed done it in the past and countless more will certainly do it again in the future.

World War I and World War II, as well as every war before in between and after, saw countless couples kissing each other goodbye, not knowing whether they would ever see each other again. Each kiss could have very well been their last one.

Many images you see today of soldiers kissing their loved ones before leaving for war come from the 1944 Valentine's Day issue of LIFE magazine. The issue published photographs of couples embracing at New York's Pennsylvania Station in 1943. The accompanying text said:

"They stand in front of the gates leading to the trains, deep in each other's arms, not caring who sees or what they think. Each goodbye is a drama complete in itself, which Eisenstaedt's pictures movingly tell. Sometimes the girl stands with arms around the boys' waist, hands tightly clasped behind. Another fits her head into the curve of his cheek while tears fall onto his coat. Now and then the boy will take her face between his hands and speak reassuringly. Or if the wait is long they may just stand quietly, not saying anything. The common denominator of all these goodbyes is sadness and tenderness, and complete oblivion for the moment to anything but their own individual heartaches."

But it wasn't just lovers who shed tears. Mothers hugged their sons close to them and soldiers kissed their children hoping that they would get to see them grow old.

And when all of these wars finally came to an end, the goodbyes did not stop. Soldiers embraced other soldiers, fervently hoping that they could avoid losing touch with the only people in the world who truly understood what they had gone through.

Next, learn about World War II's Dunkirk evacuation in 33 dramatic photos. Then, take a look at 25 photos of World War I and World War II dazzle camouflage.