The 9 Weirdest Mushroom And Fungi Species In The World

Fungi that bleed, hiss, and "throw their hats" — we've foraged nine of the strangest mushrooms in the world.

Some might only think about mushrooms as a pizza topping, but the wide world of fungi is a much more stunningly bizarre — and sometimes visually upsetting — place than that.

Mushrooms are the fruiting bodies of certain fungi. Once mature, they produce microscopic spores, like pollen, that may number in the billions in order to spawn.

Thousands of different varieties of mushrooms exist: edible, medicinal, poisonous, hallucinogenic, and more. And they come in almost every color and shape imaginable. From the mushroom that looks like a bleeding tooth to the species known as devil’s fingers that smells like rotten meat, these weird mushrooms are sure to amaze — and disgust. 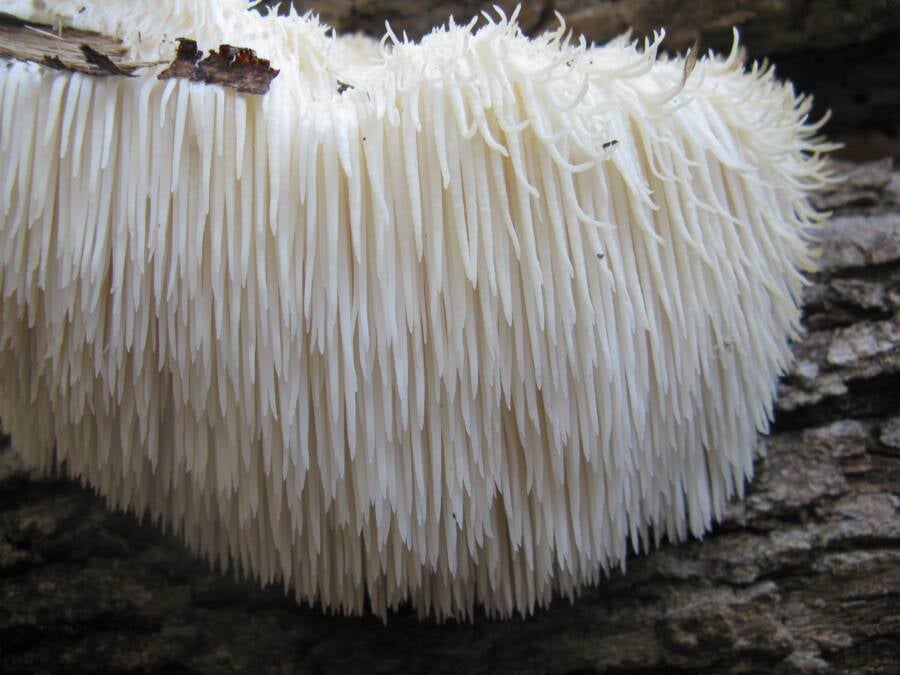 Known as the bearded tooth mushroom or the lion’s mane, the Hericium erinaceus is an edible, medicinal mushroom that belongs to the tooth fungus group, which are mushrooms that feature teeth-like ridges on the underside of their caps. Spores are also produced in the teeth before being released for reproduction.

Interestingly, these ridges always grow perpendicular to the Earth. 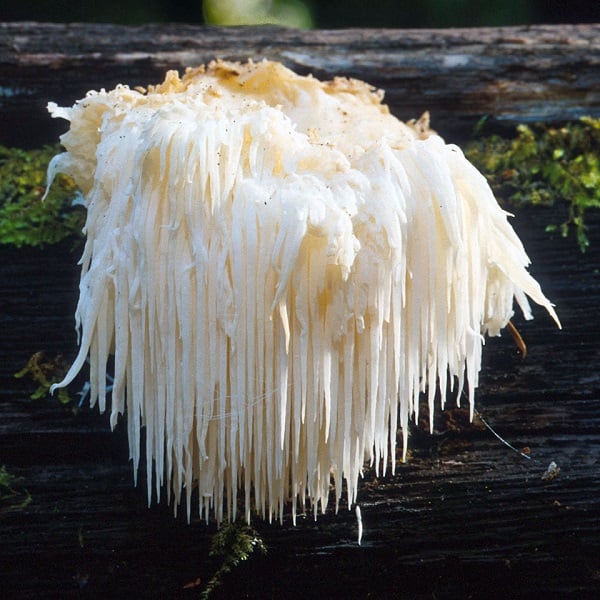 The Fungi of CaliforniaHericium erinaceus is said to have anti-diebetic properties, among other health benefits.

This mushroom species is usually found sprouting like a parasite from living, recently cut, or injured trees in North America, Asia, or Europe.

While they are typically edible, most of these bizarre mushrooms don’t taste very good at all — except, apparently, for the bearded tooth mushroom, which tastes like lobster cooked in butter when eaten young and fresh. 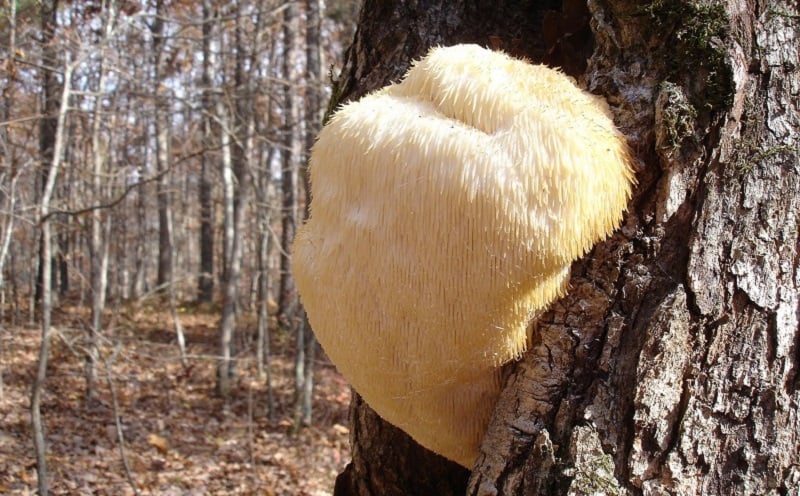 Two species of weird mushrooms known as a Badger and One-Eyed Toad.

Some studies have also shown that Hericium erinaceus can have a positive effect on increasing serotonin levels and controlling depression.

2. The Bizarre Mushroom That Looks Like A Bleeding Tooth (Hydnellum pecki) 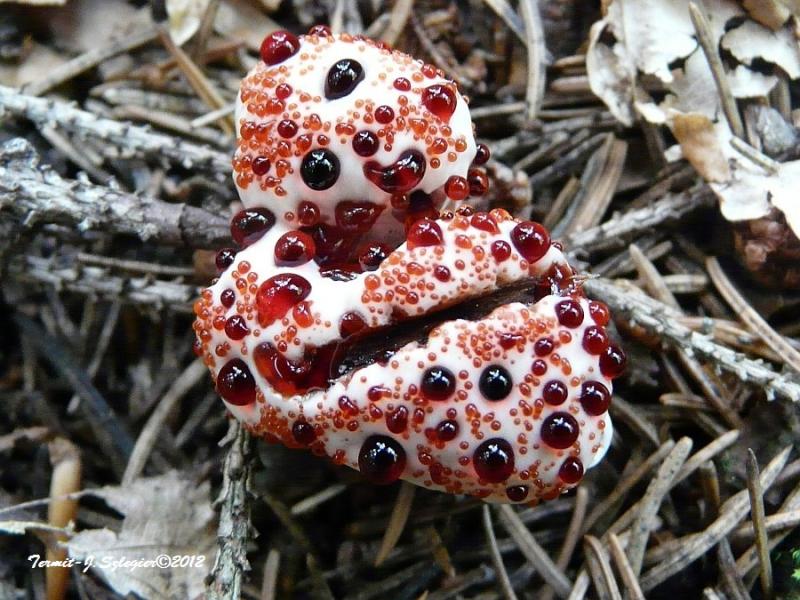 The Bleeding Tooth is undoubtedly a bizarre mushroom species, and its appearance is also pretty unsettling.

Found in various parts of the world and not to be eaten, the body of a young Bleeding Tooth mushroom “bleeds” a pigment that contains anticoagulant properties, like blood thinners. Older specimens are brownish colored.

The gooey red liquid that bleeds out of this weird mushroom is actually a sap of sorts. It’s made by a process called guttation, during which the soil surrounding the fungi becomes very wet and is able to force water into the roots of the mushroom through osmosis. This creates enough pressure within the mushroom that the liquid is squeezed out of it. 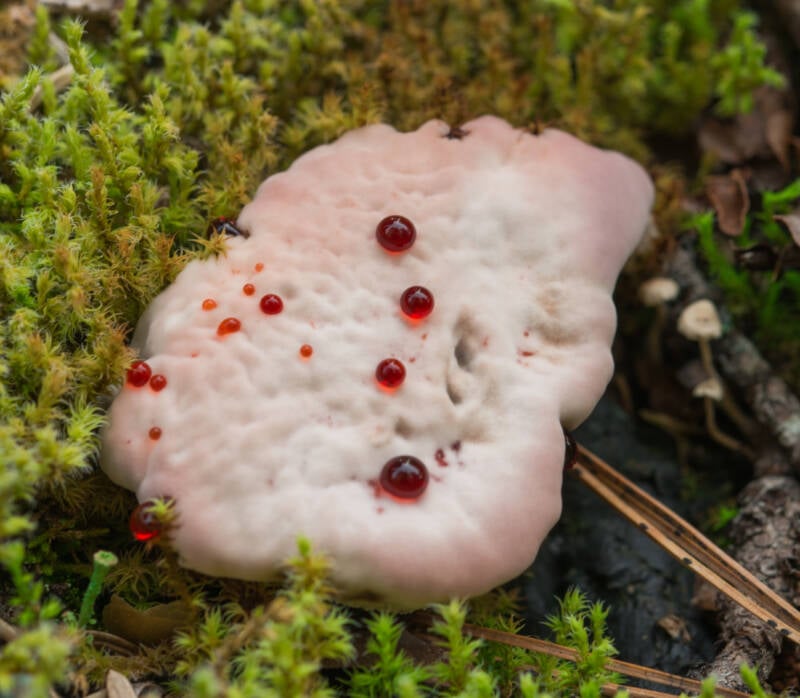 Will Brown/FlickrThough they might look juicy, these mushrooms are not to be eaten.

Located in forested mountain areas within North America, Europe, Iran, and South Korea, Bleeding Tooth mushrooms live symbiotically with the coniferous trees from which they grow.

The trees provide the mushroom with a fixed source of carbon dioxide while the fungus converts amino acids and soil minerals into forms that the trees can more easily access for energy itself. 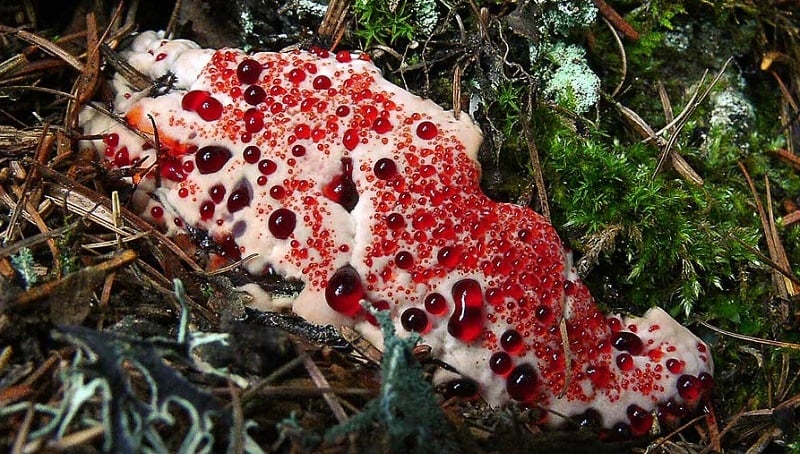 Manfred MüllerThough they might look juicy, these mushrooms are not to be eaten.

When they’re young, the bleeding tooth’s surface is covered in soft hairs that make it seem to have a velvety texture. Unfortunately, these mushrooms are rarely seen at their best, often found embedded amongst plant stems and other woody debris.

And though it might like strawberries and cream, this weird mushroom is incredibly bitter and is best not eaten. 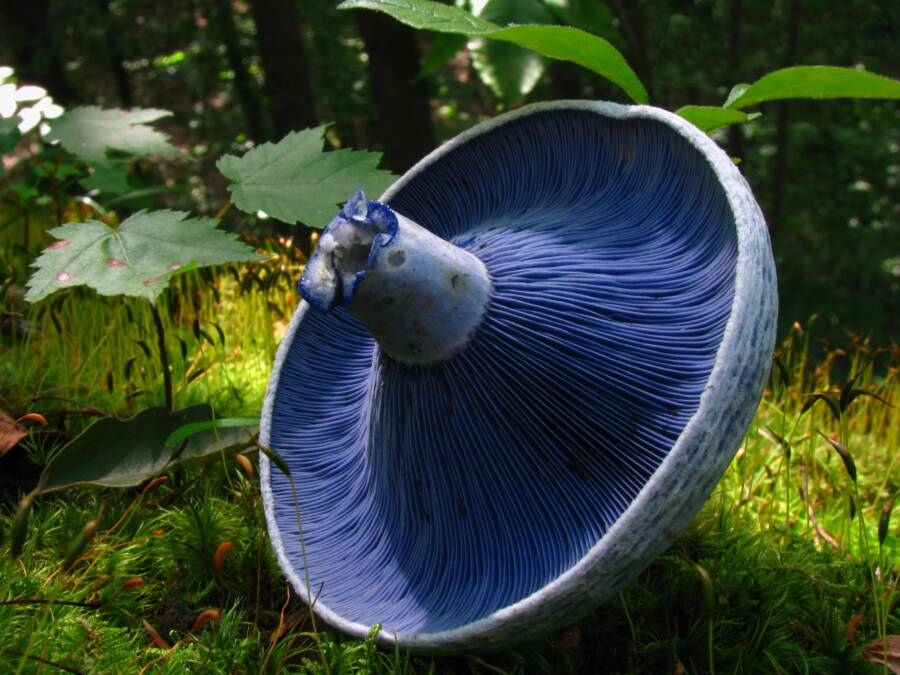 The Lactarius indigo mushroom gets its name “Indigo Milk” from the blue milky liquid it exudes when cut with a knife. This bizarre mushroom grows in North and Central America and is usually characterized by its silvery-blue coloring.

Although, as this bizarre mushroom ages, its coloring changes to a grayer, greenish-blue. 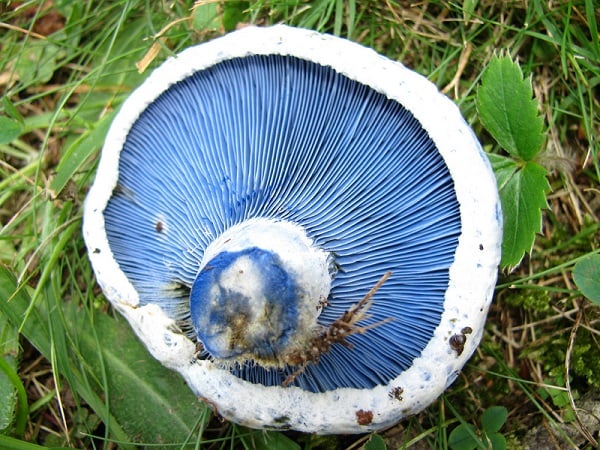 Indigo Milk Caps grow either scattered or in groups, on soil or oakwood or pine. They’re most commonly found from July through October, and like many other fungi on this list, they have a symbiotic relationship with the trees from which they often sprout. Their preferred trees tend to be oak or pine.

Because of this bizarre mushroom’s vibrant pigments, it’s also been known to be used as a dye for textiles. 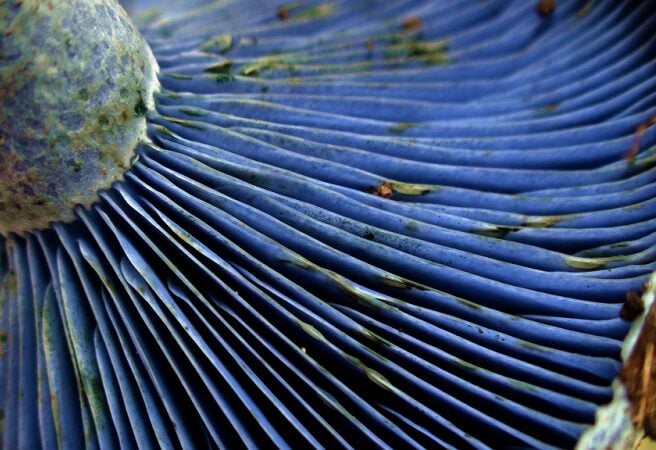 Plaidbird/TumblrIndigo Milk Caps will turn green when cut and oxidized.

Not only are these weird mushrooms lovely to look at, but they are also excellent to eat. When added to scrambled eggs, the mushrooms will turn them green.