Inside Hitler’s Plan To Build The “Capital Of The World”

The city in 'Man In High Castle' may seem like a dystopian nightmare, but Hitler had plans to make it very real. 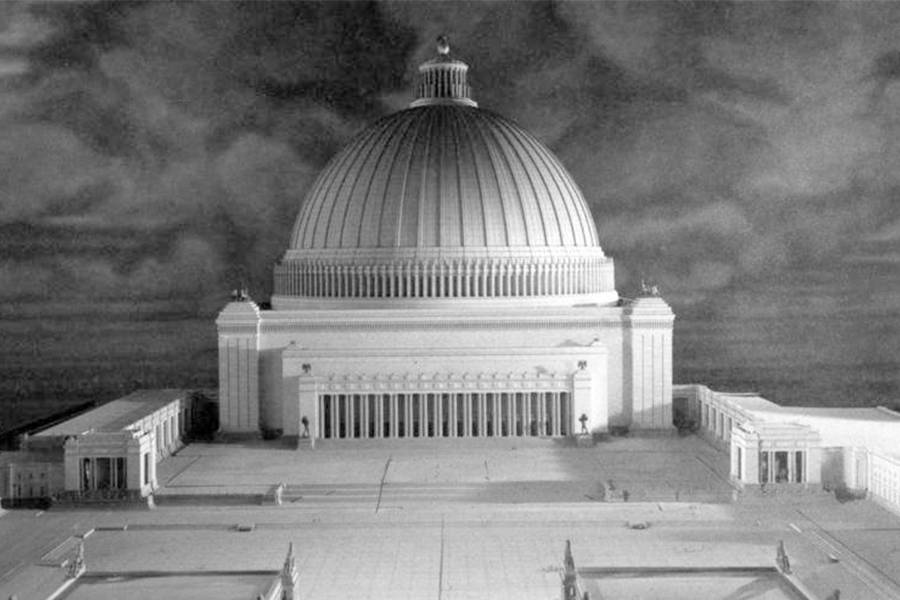 On Amazon’s alternative history thriller, The Man in the High Castle, viewers are taken into a CGI-world of a new Berlin that has grown in scale and grandeur to reflect its place as the center of a Thousand Year Reich that now covers most of the globe.

But rather than springing from the mind of filmmakers, this Nazi super-city is based on real plans conceived by Adolf Hitler and Albert Speer, the “General Building Inspector for the Reich Capital.” The project was started in 1937. A massive scale model was made, sections of Berlin were cleared, and its construction sites may have even initiated the Holocaust.

Hitler was determined this vision of a Nazi dystopia called Welthauptstadt Germania (World Capital Germania) would be finished by 1950. Speer had impressed Hitler with his work on buildings at Nuremberg, which were deliberate reinterpretations of classical architecture into massive, distinctly austere Nazi architecture designed to intimidate and overwhelm.

This aligned with Hitler’s vision to make Welthauptstadt Germania the grandest city of them all by taking the best monuments Europe had to offer and to super-size them. Most of these monuments would be placed along a seven-kilometer (4.3 miles) Boulevard of Splendours to create an overall narrative describing Nazi Germany’s superiority to citizens and visitors alike. At the south end of the boulevard, would sit the Triumphal Arch, designed to dwarf Paris’ Arc de Triomphe, which could fit inside Hitler’s planned arch six times. At the north end, the boulevard would open up into a parade ground featuring a colossal Fuhrer’s Palace, the Reich Chancellery, and the ridiculously massive Grand Hall.

The more elegant domed structures of Rome’s Pantheon and St Peter’s Basilica influenced the Grand Hall. But Hitler preferred size to elegance. It would cover 99,000 square meters and would be capped with a colossal dome that was 300 meters high and weighed 200,000 tons. Designed to be a sort of Nazi cult site and city focal point, it would be the largest enclosed space in the world, able to hold 180,000 people inside it. Apparently, the breath from the crowd would have created the building’s own rainfall as it precipitated from the ceiling. 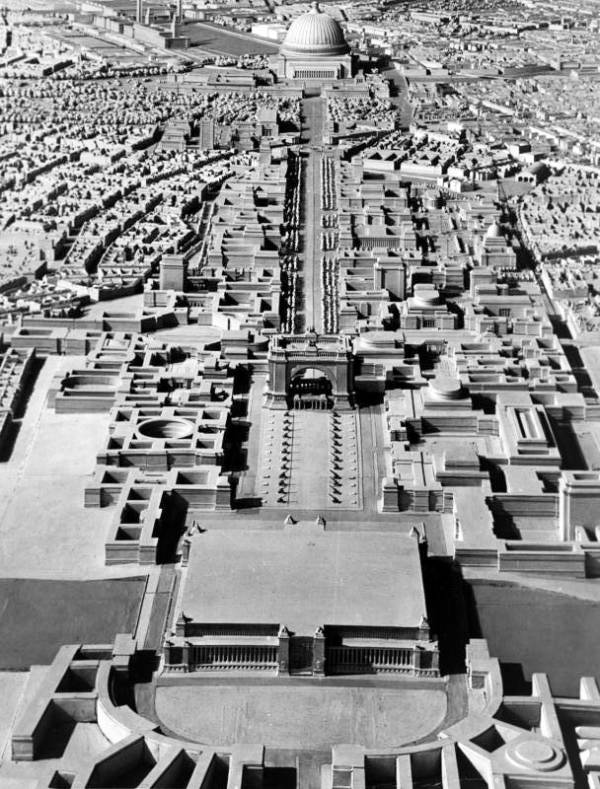 Hitler’s scale-model of Germania. The Boulevard of Splendours connects the Grand Hall, in the distance, to the Triumphal Arch, a gargantuan, inelegant version of the Arc de Triomphe.

Only a handful of buildings were constructed. Hitler’s Reich Chancellery was one, with its Long Hall twice as long as Versailles’ Hall of Mirrors, which inspired it. Unfortunately, it was destroyed in the bombing of Berlin in 1945. Another building was the stadium for the 1936 Berlin Olympics, built five miles from Berlin’s center. It was the largest in Europe, modeled off the Roman Colosseum, but 200 meters longer. After the game’s success, Hitler decided he needed a more massive arena, which, was it planned, would house every Olympic Games hence. It was only partially built.

The rest of Welthauptstadt Germania would be new ring roads, autobahns, tunnels and living areas. The environment would have been hostile to citizens. Traffic lights and tramways would be a thing of the past, forcing pedestrians underground into a system of tunnels just to cross the roads and negotiate the complex roadways.

The architecture would literally and metaphorically oppress its people.

Areas of residential Berlin were marked for development. Speer and his cronies had 60,000 apartments bulldozed and 100,000 Germans became homeless. The real suffering was once again directed at the Jews. There would be no place for them in this new city, so 25,000 apartments were seized from Jews. Evicted, they were sent to ghettos, then concentration camps, while homeless Germans were crammed into their apartments.

The Jews became the laborers. Speer apparently remarked: “The Yids got used to making bricks while in captivity in Egypt.”

Many believe the “Night of Broken Glass” in Nov. 1938 was the beginning of the Holocaust but it started months earlier with Germania’s construction.Gross-Rosen, Buchenwald, and Mauthausen concentration camps were built near quarries, while Sachsenhausen was built near a brickworks. Speer signed a contract with the SS to have all bricks shipped to Germania’s construction sites. Sachsenhausen was 35 kilometers from Berlin’s center, so canals ferried the quarried stone to the Welthauptstadt Germania construction sites. These brickworks proved the harshest labor in all camps. Literally, tens of thousands were worked to death. 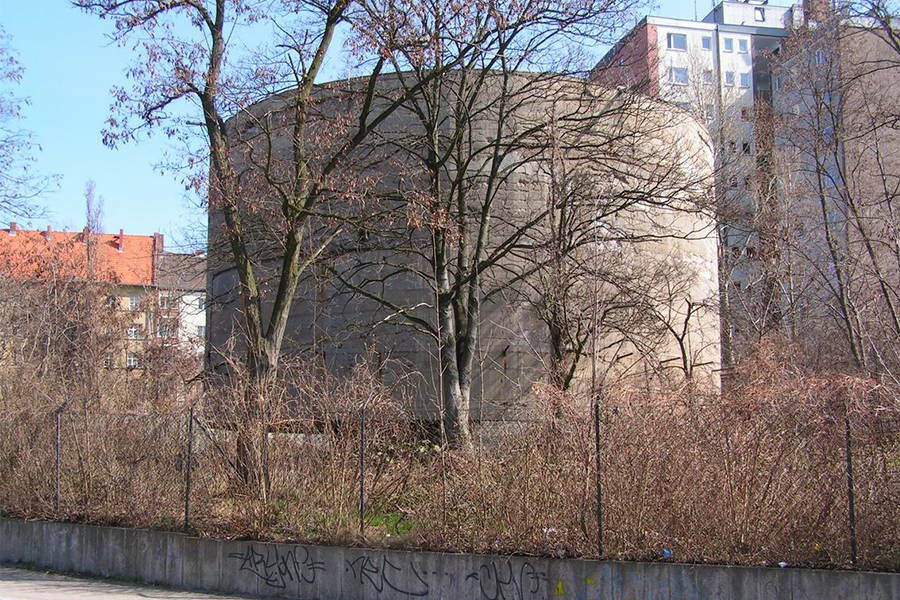 Wikimedia CommonsThe Schwerbelastungskoerper, a structure built to see if Berlin’s weak ground could hold the heavy foundation of the planned arch.

The workforce of 130,000 included not only Jews but POWs. Then in June 1938, police started rounding up tramps, gypsies, homosexuals, and beggars off the streets to make up the labor force.

Hitler’s project was not without its critics. Speer’s number two, Hans Stefan drew a series of caricatures which parodied the overbearing nature of the Germania project in secret. Several drawings poke fun at the ridiculous size of the Grand Hall. One depicts Berlin’s largest building, the Reichstag, being accidentally moved by a crane during construction of the impossibly large Grand Hall.

Stefan does not hold back in criticising the changes to Berlin, which he sees as tampering with German history and culture. Hitler had the Victory Column relocated. Stefan’s response was to show the Goddess Victory, unhappy with Hitler’s decision, escaping via parachute from her fixture at the top of the column.

Construction on Welthauptstadt Germania finally ground to a halt as the Second World War progressed. Speer believed that Nazi victory was imminent and remarked that Allied air strikes on Berlin had helped to level the old city to pave way for Germania. They hadn’t.

Though Hitler committed suicide Albert Speer was luckier. At the Nuremberg Trials he charmed the court, and despite his heavy use of concentration camp labor, he denied knowledge of the Holocaust. Spared execution, he spent the next twenty years in Spandau prison.

Next, take a look at the giant trove of Nazi artifacts found in Argentina after the war. Then, read about some of the craziest weapons that the nazi’s dreamed up over the years.