Zealandia: The Lost Continent That Sank Beneath New Zealand

A 2017 expedition claims to have definitive evidence of a new continent about as big as India. And the discovery of Zealandia could have international economic implications.

Everyone knows the story of Atlantis, and while that’s just a myth, sunken landmasses are very real — and few are more fascinating than Zealandia, the landmass lurking beneath New Zealand.

Mostly submerged and stretching almost two million square miles, Zealandia has long piqued the interest of scientists. Researchers are hopeful that further study of the landmass will give insights into the seafloor, climate history, and even pollution. Zealandia could also have major economic implications for New Zealand itself.

Now, a team from the University of Queensland has started to map Zealandia’s boundaries — offering the world an incredible look at an underwater realm.

The First Discovery Of Zealandia

Zealandia is a submerged continent buried deep beneath the waves of the Pacific ⏤ and it’s inhabited.

That’s because roughly six percent of the landmass is still above sea level as New Zealand and its outlying islands. These are the highest points of what was once a much larger expanse of land. 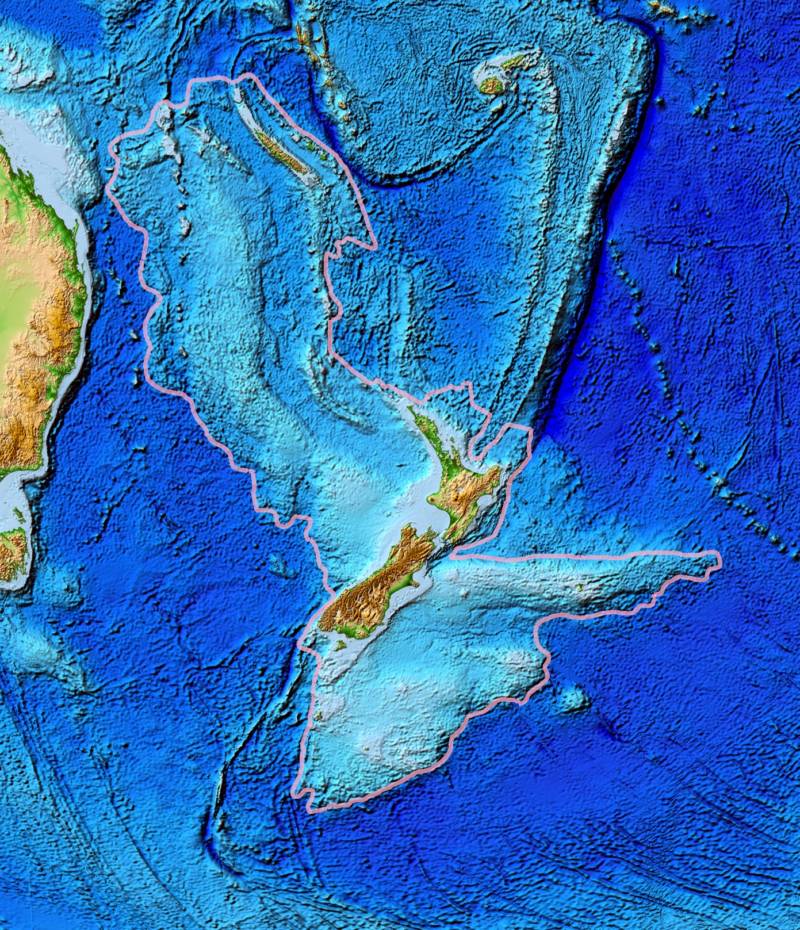 Wikimedia CommonsA topographical map of Zealandia, with New Zealand showing as the major landform. The east coast of Australia is on the left.

As a result, Zealandia wasn’t so much discovered as it was recognized.

In 1995, an American geophysicist and oceanographer named Bruce Luyendyk noticed Zealandia for the first time. Luyendyk was studying Gondwana — a piece of the supercontinent Pangaea that geologists think split apart around 180 million years ago to give us present-day South America, Africa, India, Australia, and Antarctica — when he made the find.

Luyendyk had been studying the region since the 1980s. He was trying to match the Antarctic geologic features to the edges of New Zealand — a project akin to trying to fit pieces of a crumbling puzzle back together.

This work led Luyendyk and his fellow researchers to take a closer look at the seabed around New Zealand. What they found astonished them: The rock beneath the island nation might constitute a continent in its own right.

What Makes A Continent? 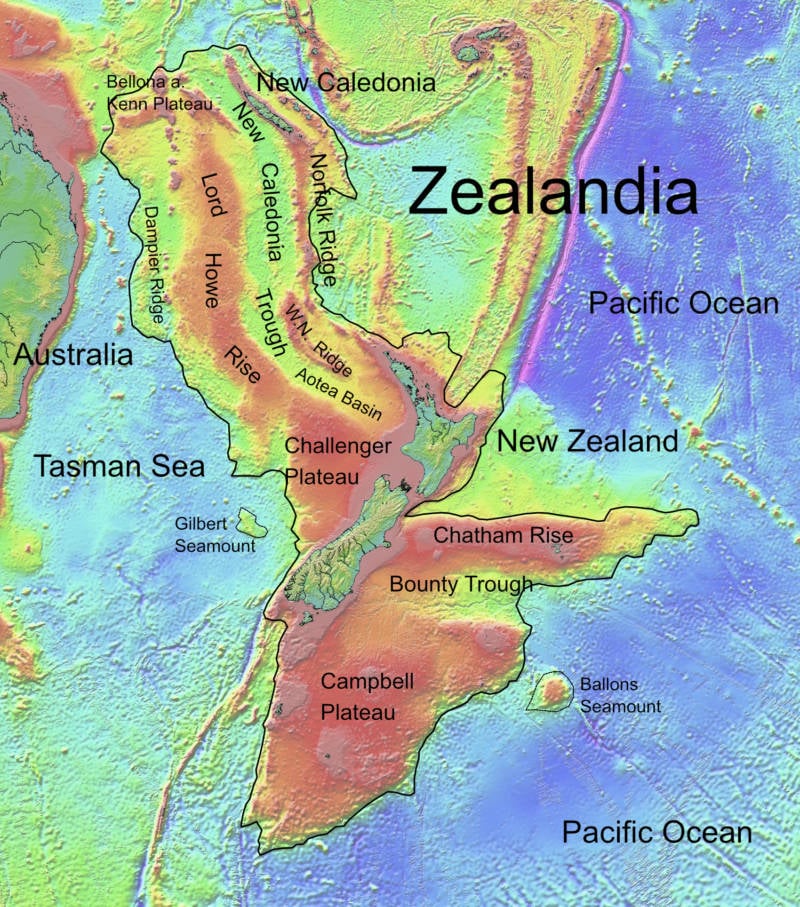 Wikimedia CommonsA map of Zealandia, outlining important points. New Caledonia is to the north. The Tasman Sea is to the west.

Most learn in school that there are seven continents. However, geologists have posited that there are only six — as Europe and Asia can be considered a single continent.

Whether Zealandia is considered the seventh or the eighth continent, then, was long up for debate. Geologists argued that it should be considered a continent in its own right.

They explained that the rock beneath New Zealand, by Luyendyk’s calculations, meets the criteria which classify a landmass as a continent. Luyendyk called the area Zealandia when he recognized that New Zealand and its outlying islands weren’t actually disparate, and it wasn’t long before other researchers took up the cause and pointed to all the qualities that made Zealandia fundamentally the same as other continents — just underwater. 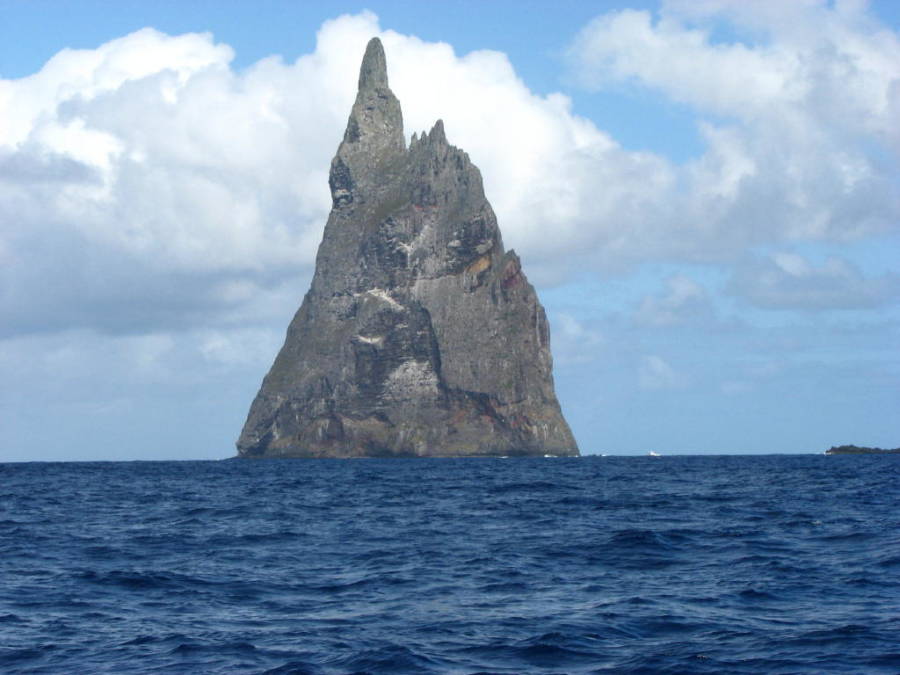 Also, Zealandia is raised above the ocean floor, which means there’s a clear difference between the submerged landmass and the surrounding seabed and not just in their respective heights. Zealandia, unlike the neighboring ocean floor, is made from the bulkier, less dense material that forms the continental crust.

Its composition also meets the requirements for a continent. Like other continents, it is made up of three separate types of rock: igneous, metamorphic, and sedimentary. This variety reveals that it was formed and shaped by volcanic activity, heat, pressure, and erosion, just like in other continents.

Zealandia is also too big to be considered just a continental fragment. Although some argued that Zealandia better deserved the less impressive designation “microcontinent,” others pushed back, noting that the rock beneath New Zealand is significantly larger than even the largest recognized microcontinent.

Atlas Pro explains what makes a continent and argues that Zealandia should be the eighth continent.

Whether Zealandia constitutes a continent or not can seem like a rather dry and technical point for scientists to argue over. But the answer had real consequences for the region economically.

The United Nations determines a country’s right to drill off-shore based on continental boundaries — and if the entire landmass of Zealandia belongs to New Zealand, that significantly changes the island nation’s fortunes.

By some estimates, tens of billions of dollars worth of fossil fuels could suddenly become available to the country, once Zealandia was recognized as a continent.

In 2017, the debate came to an end: Zealandia was officially classified as Earth’s eighth continent.

Few teams did more to underline Zealandia’s right to continent status than the expedition that set out to drill into Zealandia’s submerged rock in 2017.

The project was a tricky one. The lost continent is hidden beneath two-thirds of a mile of water. To get a range of samples, the researchers had to drill 4,000 feet into the sediment over a period of nine weeks.

But their efforts proved fruitful. Geologists believe that Zealandia separated from Antarctica somewhere between 85 and 130 million years ago, then broke off from Australia between 60 and 85 million years ago.

Watch Pangaea split apart to form the continents we recognize today, including Zealandia.

This research confirms that theory, and further posited that as Zealandia separated from Australia, its crust stretched and thinned until it dropped to the bottom of the ocean.

No human ever saw the continent above the water, but researchers were able to find hundreds of fossils, crushed shells, and pollen samples that suggest that the continent spent more time than scientists previously thought at a relatively shallow depth.

This means that, for a time, animals easily crossed between the continent’s highest points, and plants covered its tropical peaks. 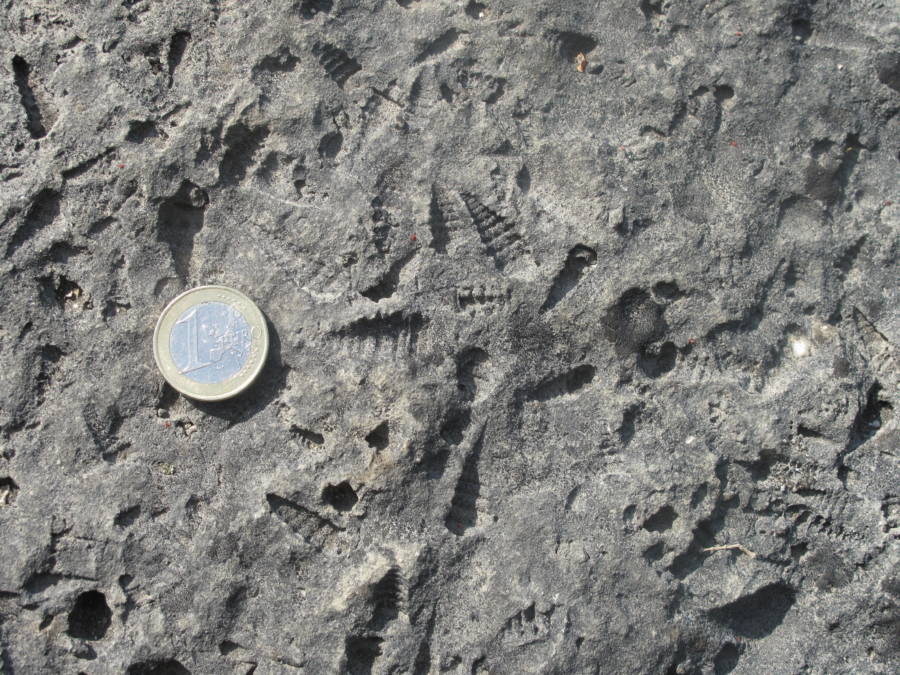 Wikimedia CommonsFossils of tiny shells with a 1 euro coin for comparison.

The news was a critical piece in several ongoing puzzles.

First, the discovery that the region’s climate was once tropical offers scientists new climate data that doesn’t just help them to understand the past, but also makes them better able to predict climate shifts in the future.

The discovery also answers longstanding questions about how the region’s animals evolved and spread from continent to continent. It paints a fascinating new picture of Zealandia as a verdant jungle teeming with life — a jungle that’s now at the bottom of the ocean.

Since Zealandia was designated as a continent in 2017, scientists have been working to map its boundaries. This is easier said than done, considering so much of the continent is underwater.

“We’re only just starting to discover Zealandia’s secrets,” said Dr. Derya Gürer, an earth scientist with the University of Queensland. “It’s remained hidden in plain sight until recently and is notoriously difficult to study.” 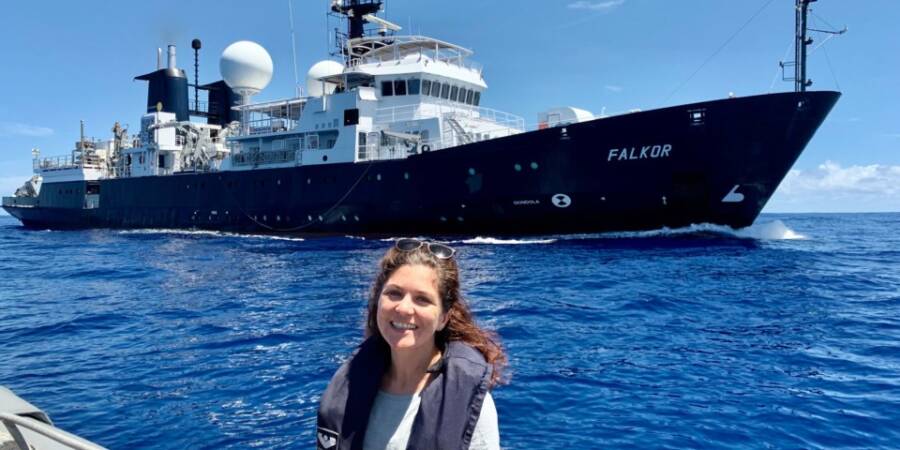 The University of Queensland has teamed up with the Schmidt Ocean Institute to map the continent. As the chief scientist on the project, Gürer spent 28 days mapping 14,285 square miles along Zealandia’s northwestern continent.

“Our expedition collected seafloor topographic and magnetic data to gain a better understanding of how the narrow connection between the Tasman and Coral Seas in the Cato Trough region — the narrow corridor between Australia and Zealandia — was formed,” Gürer explained.

In addition to mapping Zealandia, the seafaring project also served other purposes. It shared 14,000 square miles of data to the Seabed 2030 project, which aims to produce a map detailing the depth of the ocean by 2030. To date, less than 10 percent of the seafloor has been mapped.

Plus, as the research vessel Falkor moved through the ocean, it picked up plenty of seawater — and plastic — for scientists to study. Out of more than 100 samples they collected, only one had no visible microplastics, which is a concerning fact as microplastics can poison marine species.

“It wasn’t a huge surprise that we found microplastics given their prevalence globally, but it was still quite shocking how much we found,” Gürer said.

For now, scientists have their work cut out for them. The sprawling continent of Zealandia stretches across almost two million square miles. The most recent mapping project captured just 14,000.

“The seafloor is full of clues for understanding the complex geologic history of both the Australian and Zealandian continental plates,” Gürer continued.

Indeed, as researchers like her press ahead in examining the ancient sea floor, excitement grows around what the lost continent can reveal.

After this look at the lost continent of Zealandia, read up on the Bimini Road in the Bahamas. Or take a look at Lemuria, another lost continent south of India.