Looking Back At Yamamoto Nizo’s Best Work At Studio Ghibli

A brilliant view of a sunset over the water. (Girl Who Leapt through Time)
Source: The Kobe Shimbun

When Studio Ghibli announced the re-tooling and possible closing of their company this past summer, many of us to took a look back on some of the production studio’s finest films. Many of us grew up during Studio Ghibli’s heyday, shortly after it was created in 1985. It’s no secret that these films possess beautiful animation and the unforgettable stories, but there’s more going on behind the scenes of these animated classics than most of us realize. 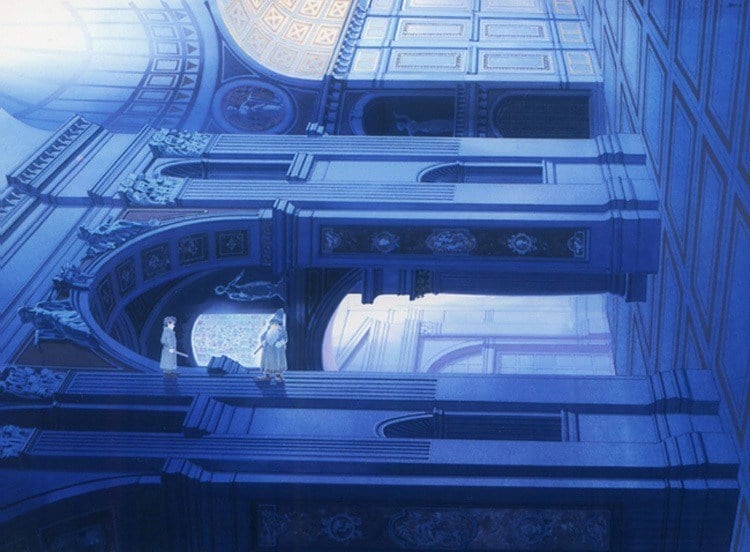 Yamamoto’s knowledge of architecture shows through in this scene. (Little Nemo)
Source: The Kobe Shimbun

Yamamoto Nizo was a star Studio Ghilbli employee for many years, and he is the one responsible for the beautiful backgrounds we see in these treasured movies. He has been at the forefront of production for over 30 years; from the forests of “Princess Mononoke” to the temples of “Fantastic Children”, he puts unmeasurable care and detail into Ghibli’s animated backdrops, which are only meant to be seen for a few short seconds. 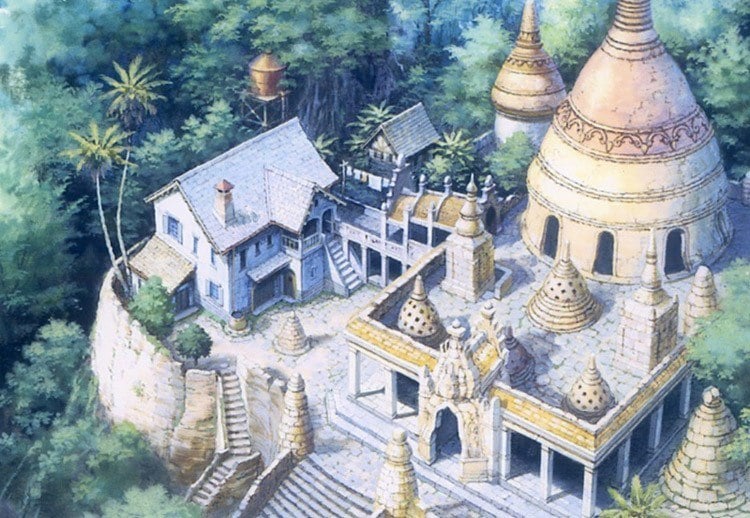 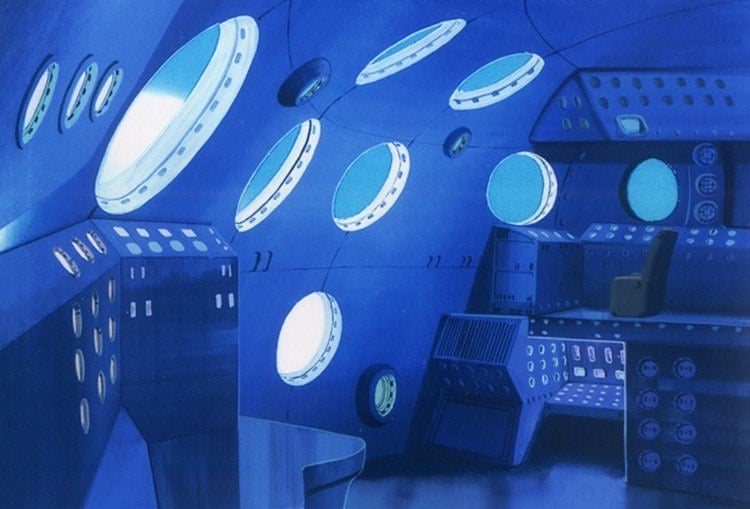 Yamamoto originally studied architecture in school, but he later discovered a passion for art and went on to create the backgrounds for many animated movies and TV shows; his work even pre-dates Studio Ghibli films, such as “Future Boy Conan.”

Later, in 1985, he was asked to join Studio Ghibli and agreed to start working on his first Ghibli film, “Castle in The Sky.” Even though it was Yamamoto’s first Ghibli film, it features professionally executed scenery. The architecture of the castle is unique, and can no doubt be attributed to Nizo’s time studying architecture. 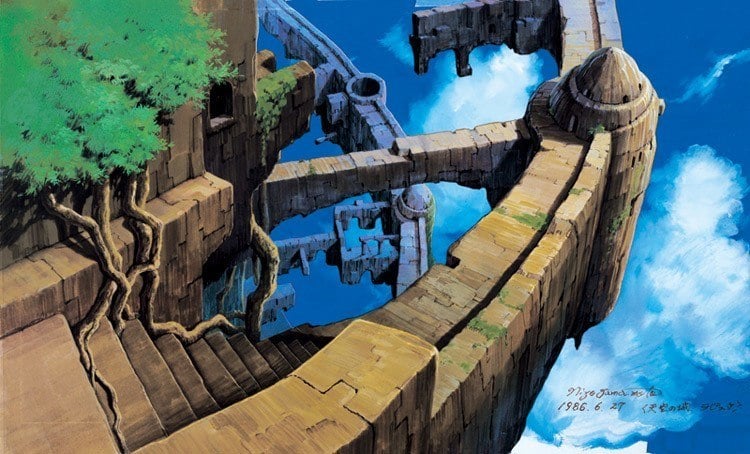 As beautiful and creative as the design of this Castle is, we wouldn’t want to find ourselves falling off of it. (Castle in the Sky) Source: The Kobe Shimbun 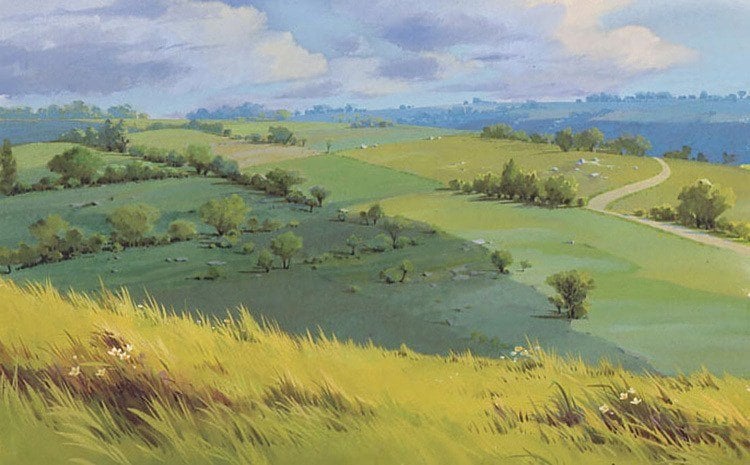 We can almost feel the breeze blowing through the grass. (Castle in the Sky) Source: The Kobe Shimbun

Made in 1997, Princess Mononoke is one of Studio Ghibli’s more popular films. The beautiful forest landscapes provided the movie with the eerie yet calm atmosphere that Yamamoto excels at. 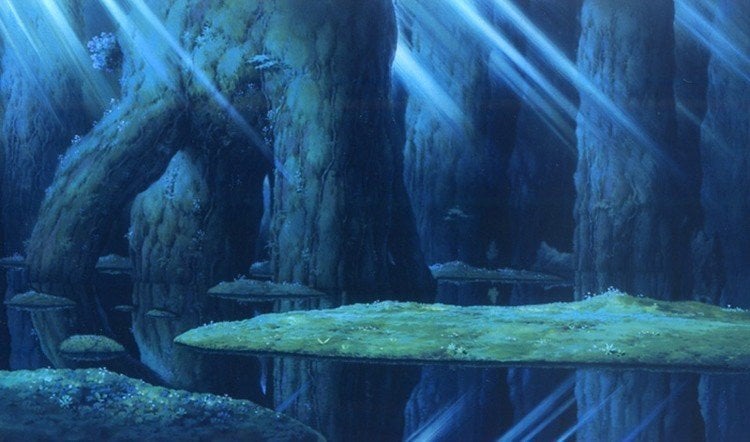 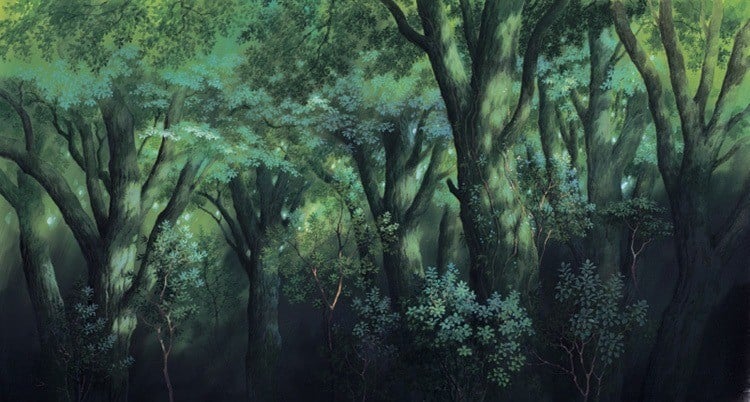 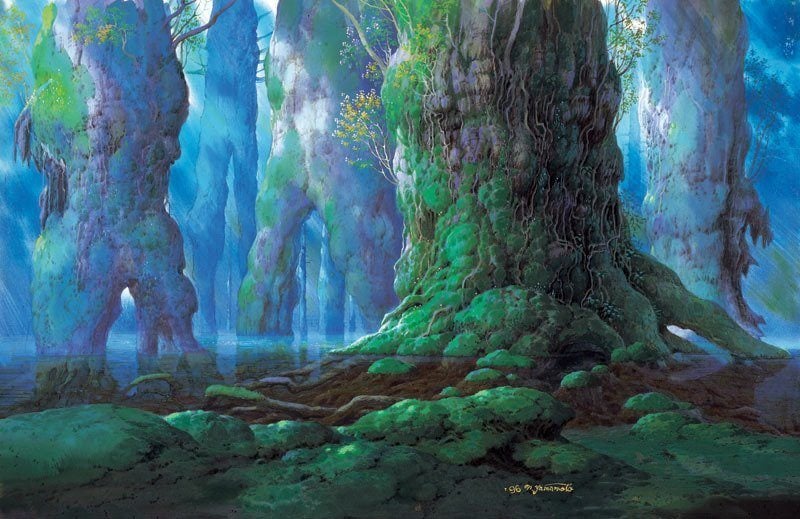 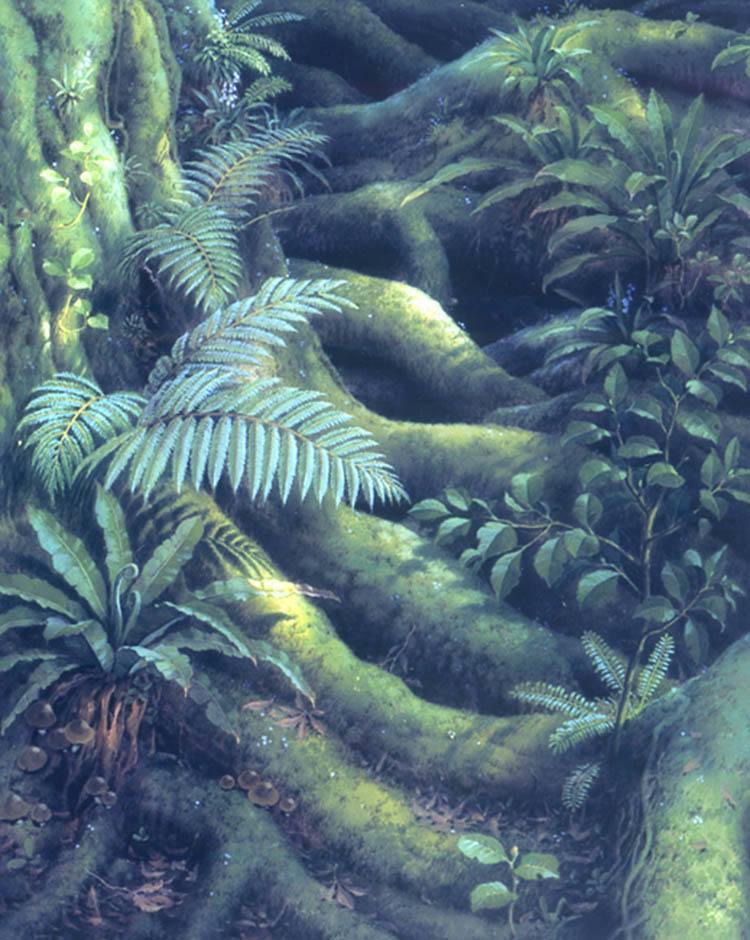 Watch your step as you go exploring through these woods. (Princess Mononoke) Source: The Kobe Shimbun

After production was completed on Studio Ghibli’s “Spirited Away” in 2001, Nizo left to pursue a career in freelance projects for Kaieisha, the business that he founded and directs. One of Nizo’s more well-known projects is “The Girl Who Leapt through Time,” for which he won the Minister of Internal Affairs and Communications Award in 2006. 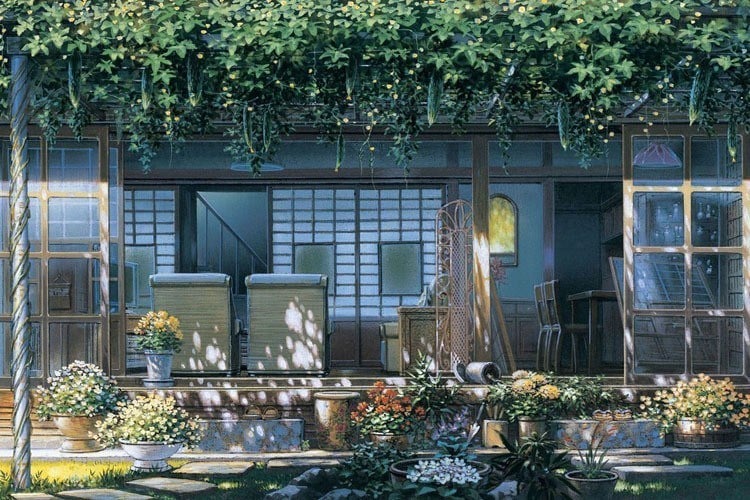 A relaxing scene with many potted plants. (The Girl Who Leapt Through Time) Source: Spoon Tamago

Created in 2006, “Grave of the Fireflies” was one of Yamamoto’s freelance projects. Not only did he receive the Minister of Internal Affairs and Communications Award for it, he also won the 12th AMD Award, given out for excellence in digital media. We hope that Yamamoto continues to enrich these films for us for a long time to come. 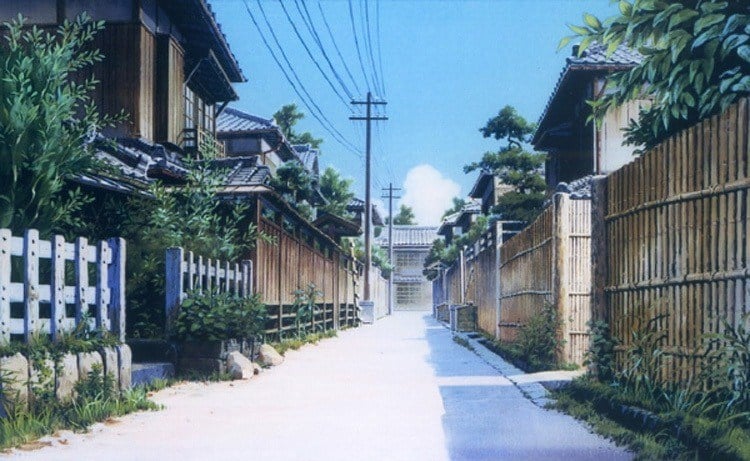 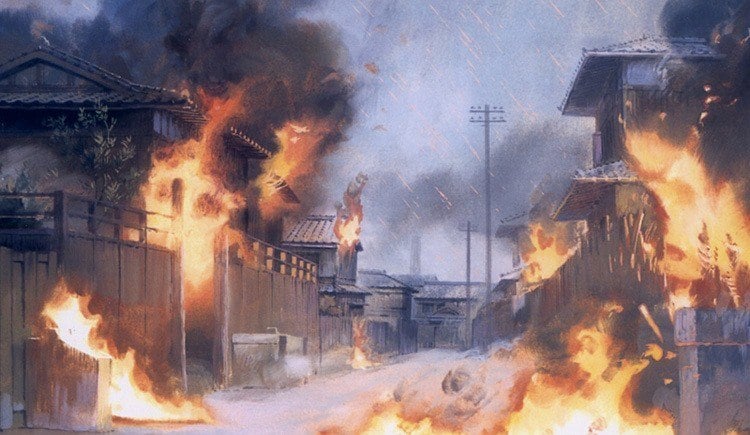 Disaster strikes! (Grave of the Fireflies) Source: The Kobe Shimbun 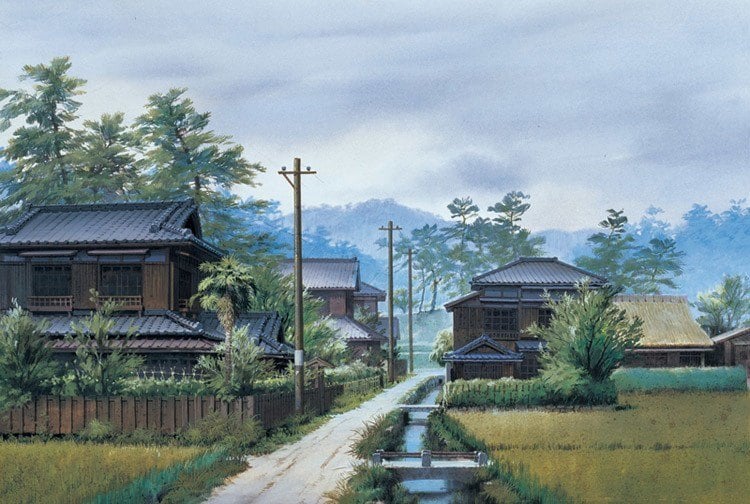 A marshy, residential landscape. (Grave of the Fireflies) Source: The Kobe Shimbun 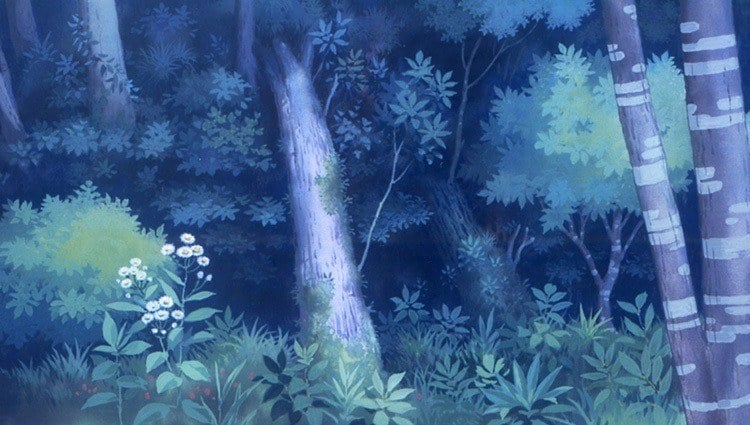