The government of Nepal created guidelines to control the mass of people coming to their country to hunt the mysterious Yeti. 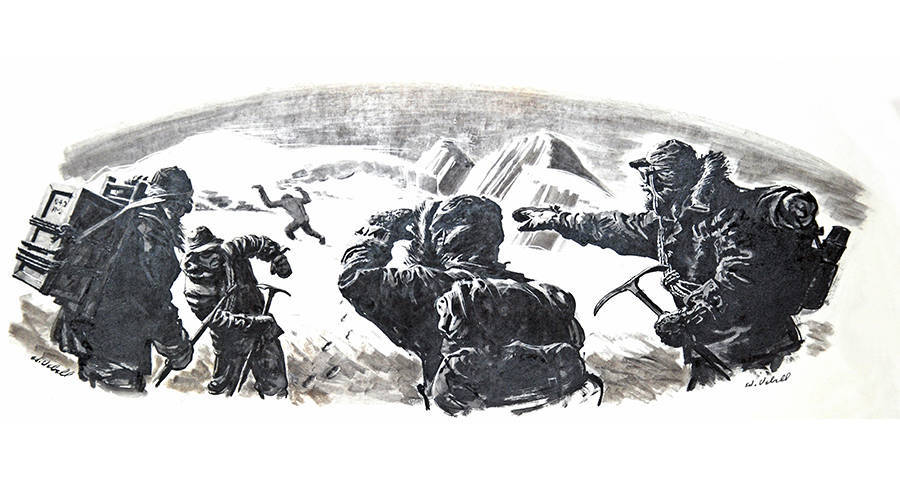 Drawing of hikers encountering a yeti.

In 1951, British explorer Eric Shipton stumbled upon one of the most exciting things a mountain explorer in Nepal could hope for — a three-toed footprint that he claimed belonged to the elusive, fabled Yeti.

Shipton, a long-time explorer, and mountaineer had been searching for an alternative route to the top of Mount Everest when he stumbled across the print. He photographed it and brought the images back to London. Within the next few years, expeditions had been organized around the world, all of them set on finding the mysterious Himalayan mountain creature.

Nepal became overwhelmed with the number of people who were flocking to the country to search for the Yeti, and, in 1957, created a “Yeti Memo” that was intended to regulate Yeti hunting. The document consisted of three guidelines, which stipulated certain terms that hunters were expected to agree to before embarking on their journeys.

First, the memo ruled that any hunters who wished to procure a Yeti hunting license had to pay a royalty of 5,000 rupees to the Nepalese government. The sum was equal to roughly $77 at the time, and $1,100 today. Turns out hunting mythical creatures was not cheap.

Second, the Yeti Memo reminded hunters that the Yeti could only be shot or killed in self-defense. It did, however, let hunters know that it was perfectly acceptable to capture a live Yeti if they were so inclined — or able. In addition, it declared that photographs of the beast were allowed, but had to be turned over to the Nepalese government.

Thirdly, the Yeti Memo stated that under no circumstances should photos of the Yeti “be given out to the press or reporters for publicity without the permission of the government of Nepal.” 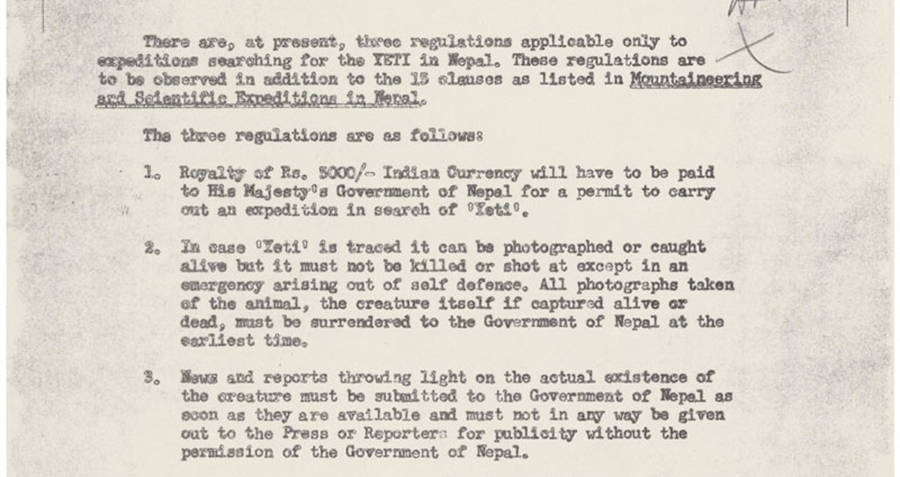 National ArchivesGuidelines for hunting a Yeti.

Meanwhile, while Nepal was battling the influx of hunters declaring war on the Yeti, the United States was at the center of the war on communism.

The U.S and the Soviet Union had been locked in the Cold War for over a decade, and the government was doing anything in their power to keep tabs on the communist countries that they felt posed a threat — including Nepal’s neighbor, China. The U.S. had long since been looking for a way to ally itself with Nepal in an effort to gain insight into China, and it seemed that Yeti hunting was the way to do it.

In a move that was seen by the government as a declaration of support for the sovereign rule of Nepal — and seen as an admittance of the existence of the Yeti by enthusiasts — the United States translated the Yeti Memo into English and published it.

“Although, at first glance, a memo about yeti-hunting seems fanciful, it is in fact representative of American Cold War strategies to combat what they saw as the rising threat of communism,” historian Sanjana Barr said.

So, while the U.S. may not have firmly believed in the existence of the Yeti, it seems they were willing to play along and publish the Yeti Memo in the interest of battling communism, and ending the Cold War.