The joint was rolled at the Harvest Cup – a meeting of cannabis aficionados from around the world who gathered to show off their cannabis-themed wares. 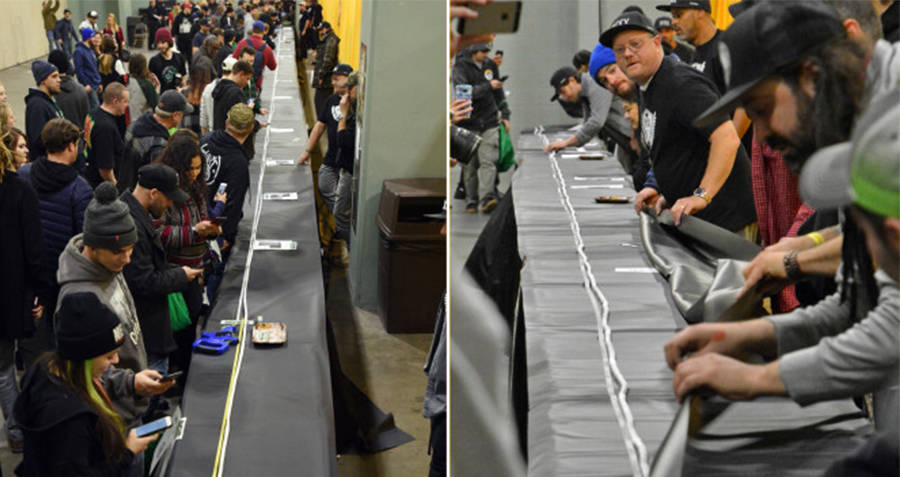 During the Harvest Cup – a cannabis extravaganza held in Massachusetts over the weekend – a group of professional weed growers got together and showed off their specific set of talents.

The result? A 100-foot-long joint, filled with 1000 grams of homegrown cannabis.

The joint was hand rolled at the cannabis festival by a “group of people wicked passionate about growing” who call themselves Beantown Greentown, and unveiled at 4:20 p.m. on Saturday.

The joint contained 35.27 ounces of the group’s own pot trimmings and was rolled using their own signature, secret rolling technique.

The Harvest Cup, which took place over the weekend at the DCU Center in Worcester, was every cannabis (never “marijuana” as it has negative connotations) aficionado’s dream. The event functioned like any other would, with keynote speakers who covered everything from the history of marijuana, to debates about legalization, to informative sessions on how to start up your very own cannabis farm.

In November 2016, Massachusetts voters legalized recreational marijuana. The new law allows adults over the age of 21 to possess up to 10 ounces of marijuana in their homes, and one ounce while outside.

The event also hosted 130 cannabis vendors, including cannabis-themed bakers and chefs, who displayed their laced goodies for event-goers. Samples included everything from a classic pot brownie, to “infused terpene enhanced fresh mozzarella cheese.”

There were also non-edible vendors present, such as Michael Milburn, who created a mobile app called DRUID – DRiving Under the Influence of Drugs, which detects impairment through a series of hand-eye coordination and timed reaction tests.

In addition to sampling treats, cannabis enthusiasts were encouraged to participate in the event’s competition, to determine the best of the best that cannabis has to offer, from edibles to bath and body products, to the plants themselves.

“What we’re hoping to get out of it is a little bit of celebration to bring this out of the shadows and let the average Joe know this is not just some room that stinks like patchouli and is filled with hippies ” said Peter Bernard, president of the Massachusetts Grower Advocacy Council, which in part sponsored the Harvest Cup. “We’re coming out of the ‘pot closet,’ so to speak.”

“We want people to join the club and become part of a bigger community,” said Keith Laham, co-founder of Beantown Greentown. And, he added “we’re all hardcore smokers, we don’t want to run out of weed.”

With a 100-foot-long joint, that doesn’t seem likely. Of course, after the unveiling, one excited onlooker asked the question that seemed to be on everybody’s mind:

“When are you going to light it up?”

Next, read about the business of marijuana growing, and how lucrative it actually is. The, check out the suburban mom who was busted in one of the largest growing operations California officers had ever seen.