Robert Marchand has led an extraordinary life. Setting this world record is just the cherry on top. 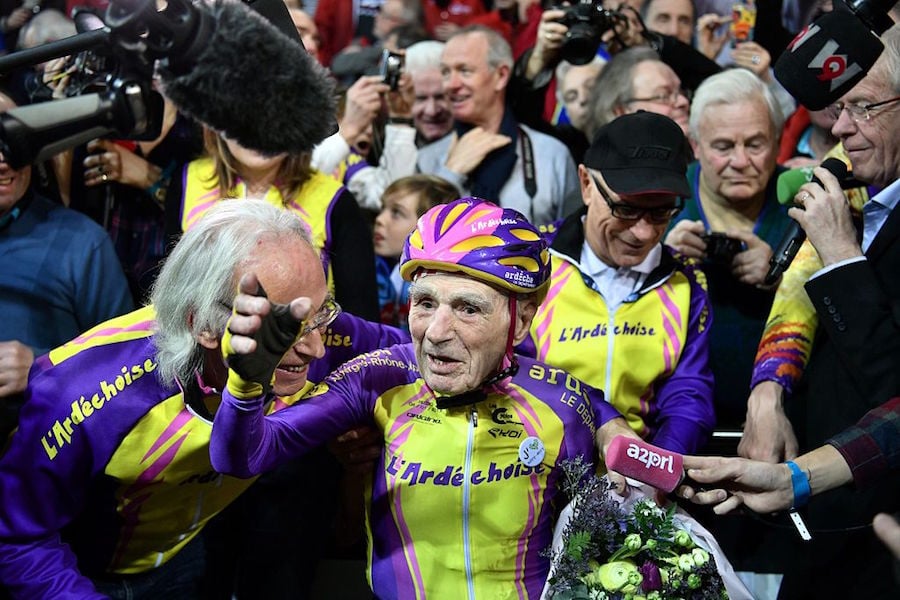 Robert Marchand, a 105-year-old Frenchman, set a new world record this past Wednesday after cycling 14 miles in a single hour.

According to The Associated Press, Marchand received a standing ovation from the audience as he set the record for greatest distance cycled within one hour in the 105-plus age group, with the crowd chanting “Robert, Robert” as he rolled to a stop.

“I did not see the sign warning me I had 10 minutes left,” Marchand said after setting the record. “Otherwise I would have gone faster, I would have posted a better time. I’m now waiting for a rival.”

“I am not here to be champion. I am here to prove that at 105 years old you can still ride a bike,” Marchand said, per Eurosport.

As incredible as this achievement is, it’s hardly the first spectacular event in Marchand’s life. Born in 1911, the former firefighter has lived through two world wars and worked as a truck driver in Venezuela during the late 1940s. He had previously cycled competitively as a young man, but quit after his coach told him he would never be a champion due to his small size.

Marchand later moved to Canada to become a lumberjack before finally returning to France in the 1960s. Unfortunately, when he got there, he worked a variety of jobs that left him no time for athletics, including cycling.

He eventually took up cycling again at the age of 75 and launched into a series of cycling feats.

In 1992, he cycled from Moscow to Paris, as well as from Bordeaux to Paris and back several times. In 2012, Marchand set a world record as the fastest centenarian to cycle 62 miles.

For all these accomplishments, Marchand’s coach and good friend Gerard Mistler told the AP that his prodigy’s secret was simple: Meals rich in fruits and vegetables, no smoking, daily exercise, 9 p.m. bedtime, only the occasional glass of wine, and of course lots of cycling.

And perhaps the way in which Marchand cycles is his greatest secret of all: Four times a week, he cycles with friends. “That’s the secret,” said Professor Veronique Billat, a physiologist who’s been studying Marchand for years, “he’s not alone.”

Next, check out what the world’s oldest person credits her longevity to, before reading our interview with Jason Lewis, the man who recently circumnavigated the globe using only human-powered devices.