The Harrowing True Story Of The 1906 San Francisco Earthquake

It’s been over a century since the 1906 San Francisco earthquake tore the city apart, but the shock waves from this catastrophe still reverberate across time. On a seemingly normal April morning, the city’s residents awoke to one of the worst natural disasters in American history.

The quake itself lasted just 42 seconds, but the damage was apparent almost instantly. Buildings had toppled, gas mains had ruptured, and severe cracks had appeared in the roads. But the devastation was far from over. Shortly after the ground stopped shaking, several fires ignited throughout the city — destroying many structures that had survived the quake. 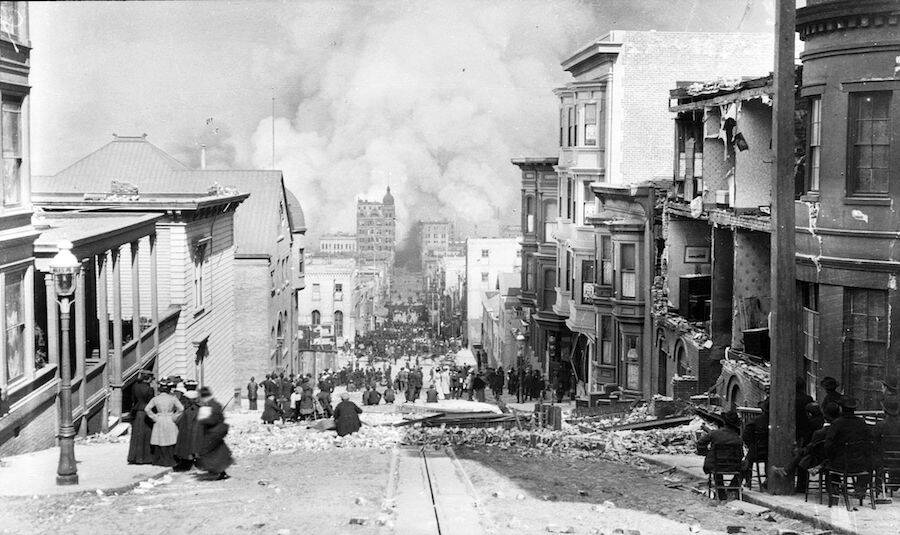 It’s estimated that 500 city blocks — comprised of 28,000 buildings — were reduced to husks of their former selves. More than half of San Francisco residents had become homeless in the seeming blink of an eye. And by the time the dust had settled, nearly 80 percent of the city had been left in utter ruins. Most horrific of all, 3,000 people had died.

Back in those days — near the end of the Wild West era — many cities like San Francisco were largely comprised of wooden and brick buildings. While these structures may have looked beautiful, they were extremely vulnerable to earthquakes. Sadly, many didn’t realize this until it was too late. 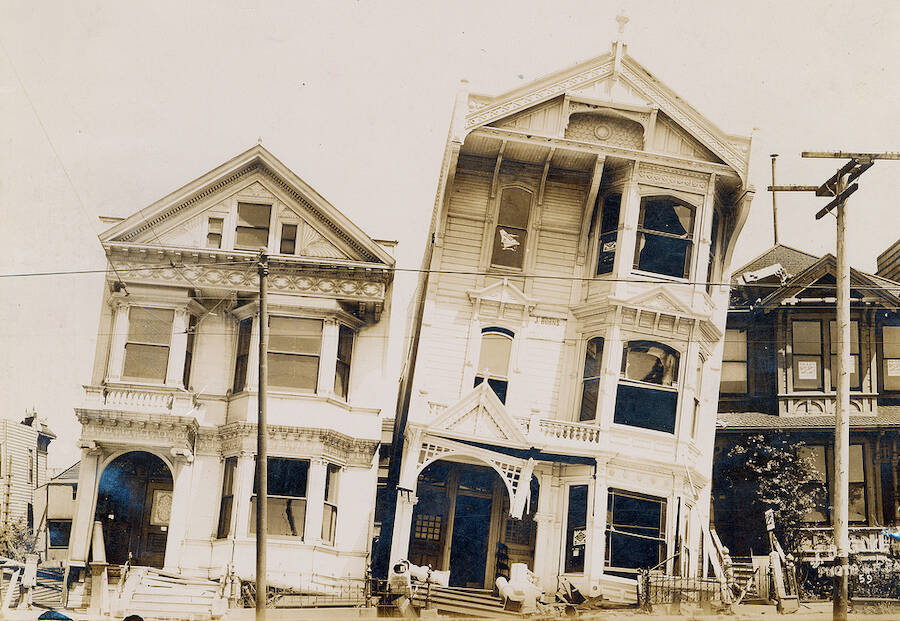 National ArchivesAn estimated 28,000 buildings were destroyed during the 1906 earthquake.

At 5:12 a.m. on April 18, 1906, a foreshock hit San Francisco. While it startled many residents awake, it was only a precursor to the truly destructive quake that would strike the area mere seconds later. And since the epicenter of the earthquake was close by, the entire city was directly affected.

Walls caved, chimneys toppled, gas lines broke, and streets ripped open. Perhaps most stunning — besides the astonishing destruction produced within minutes — is the fact that the San Francisco earthquake was felt from South California to Oregon, and as far inland as Nevada.

It was later discovered that the quake’s rupturing had spanned 290 miles of the Earth’s surface. But of course, San Francisco got the worst of it.

Sadly, the sudden nature of the earthquake — and its powerful magnitude — left countless people dead from falling debris. Many of the early victims were killed before they even realized what was happening. 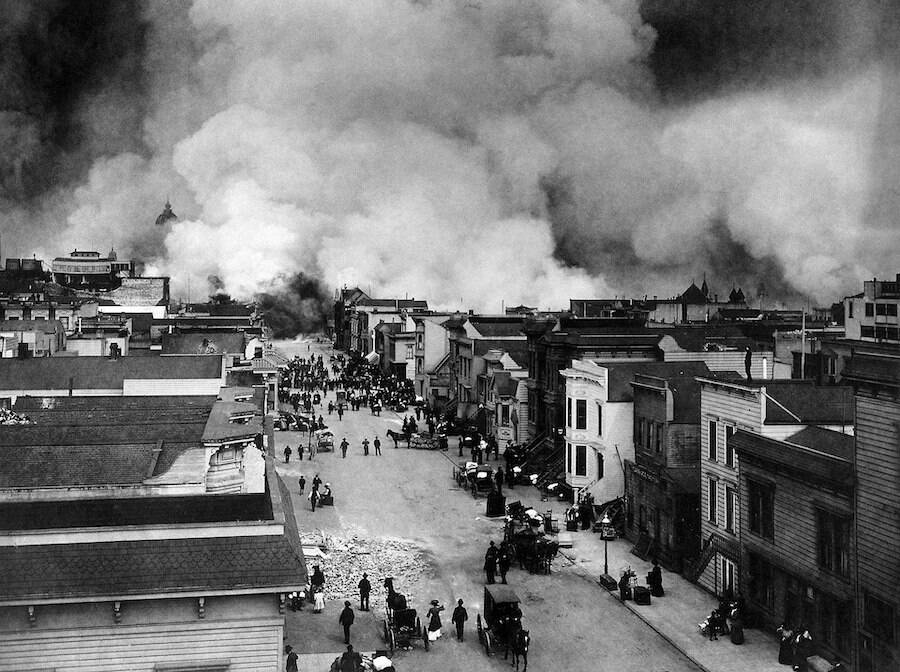 Wikimedia CommonsThe fire in the Mission District during the Great San Francisco Earthquake.

The fires springing up across town certainly didn’t help matters. Many of those lucky enough to crawl out of the wreckage were greeted with a terrifying scene of blazes scattered across the skyline.

One survivor remembered, “There were a lot of people praying on the street… thinking that the end of the world was here.”

Another recalled, “I asked a man standing next to me what happened. Before he could answer, a thousand bricks fell on him and he was killed.”

Fortunately, the disaster was not without heroics. In the moments after the devastation, some survivors quickly mobilized to help their neighbors and friends. And in some cases, they lent a hand to complete strangers.

But sadly, much of the damage was already done. And some decisions made by people who were trying to help made the situation even worse.

Why The Disaster Was So Devastating 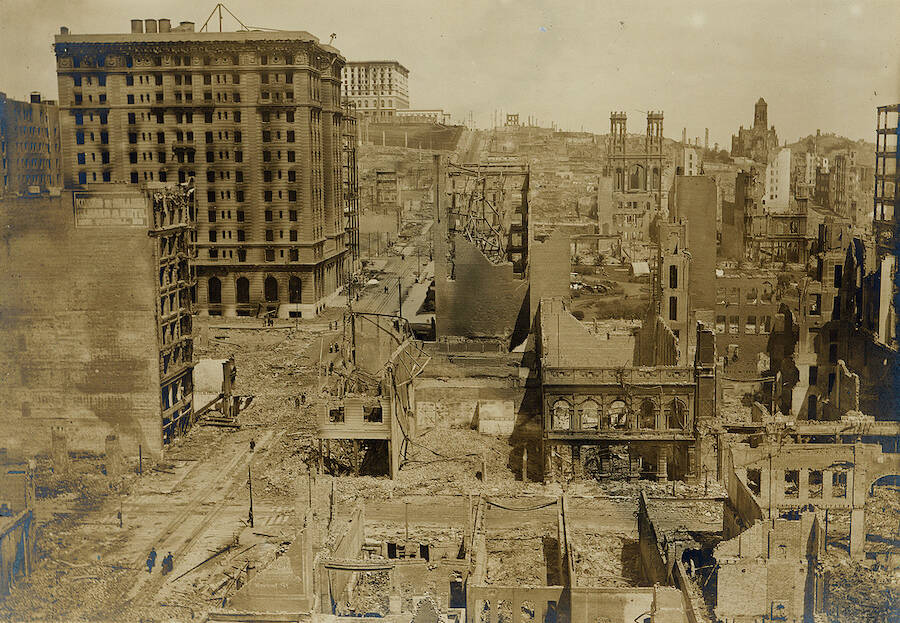 National ArchivesThe St. Francis Hotel and Fairmount Hotel (in the distance) remained standing due to their class A steel frames.

While there’s no question that the quake itself caused damage, it’s believed that the fires that followed were worse. Many of the early flames sprang up from the gas lines that had broken during the quake. But since many water pipes had broken as well, firefighters struggled to put out the flames.

Fatefully, the San Francisco fire chief had been mortally wounded early on in the quake, and he would succumb to his injuries days later. Without his leadership, many firefighters weren’t sure how to proceed — especially since most of them were unable to use their hoses as they normally would.

As the inferno raged, some firefighters resorted to using water from the ocean to combat the flames. However, others attempted to create “firewalls” by demolishing buildings with dynamite. This often made the problem worse.

In the meantime, additional fires stemmed from rather absurd scenarios. For instance, the so-called “Ham and Eggs Fire” began when a survivor of the quake tried to cook breakfast for her family. But little did she know that her flue had been incapacitated — and that her wall would soon be set on fire. Before long, the flames had spread to other buildings. 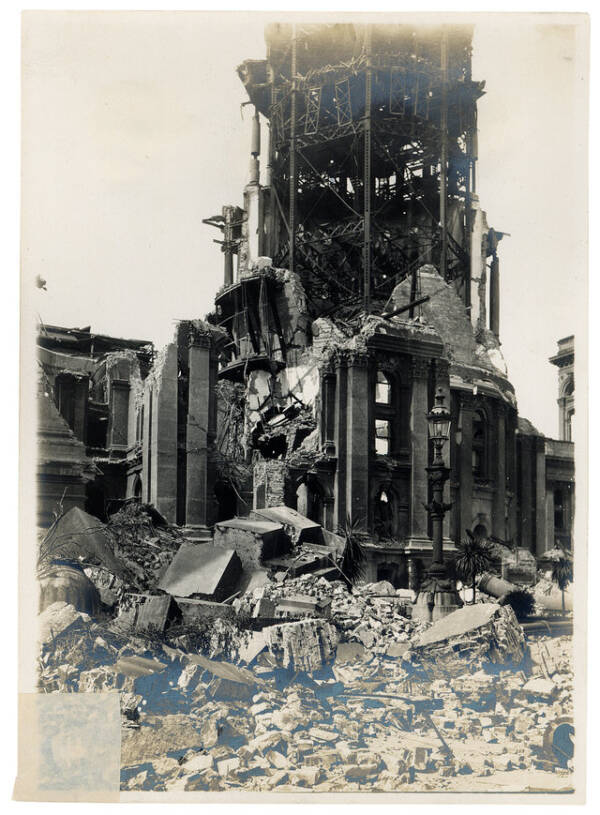 This non-contained kitchen blaze turned into a sizable fire that destroyed what was left of City Hall, leaving it in ruins. But of course, government buildings weren’t the only structures affected by fires.

Countless buildings left standing after the earthquake were engulfed in flames. People’s homes, family businesses, and iconic hotels alike all fell victim to the raging fires. Survivors took refuge in city parks, but even those seeming oases had to be evacuated as the blazes made their rounds.

It took a stunning four days for the fires to die out. But as one might expect, the aftermath would prove a challenge of its own — as firefighters, police officers, and the military scrambled to help those who survived.

Unfortunately, some residents in San Francisco received little help from authorities at all. In fact, hundreds of deaths initially went completely ignored — just because the victims lived in Chinatown.

Not only did most authorities refuse to help rescue Chinatown residents, but many of them didn’t bother to record the deaths that had already occurred in the area. One man who didn’t even live in San Francisco was quoted saying that he was “glad Chinatown will be cleared out for good.”

The Aftermath Of The San Francisco Earthquake 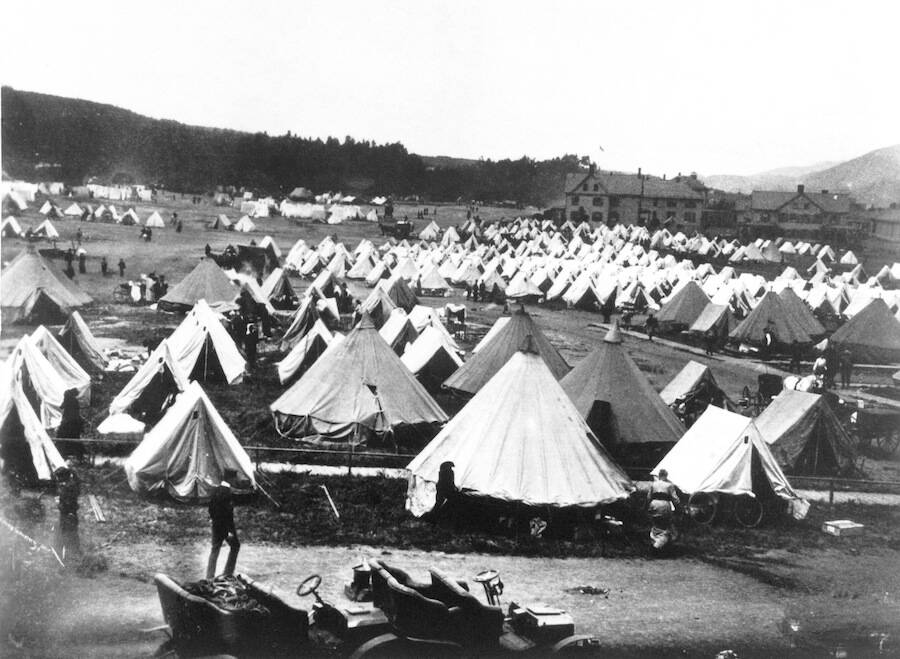 National ArchivesA refugee camp set up by the U.S. military in the aftermath of the 1906 San Francisco earthquake.

When a semblance of tranquility returned to San Francisco’s streets, the final figures regarding the disaster’s destruction were staggering. Around 3,000 people had been killed. About 28,000 buildings were obliterated, and an estimated 225,000 people had become homeless.

The 1906 San Francisco earthquake was historic not only because of its figures, but also because it helped experts better understand earthquakes as a whole. For example, it led to the elastic-rebound theory, which hypothesized that the quake was the result of the “elastic rebound” of previously stored elastic strain energy on either side of a nearby fault.

But despite the lessons learned, San Francisco was clearly eager to move on and forget the past. After the dust settled, authorities were far more concerned with rebuilding quickly than they were with rebuilding safely. They also prioritized fire safety over earthquake safety — because they didn’t want to admit that the city was at risk of more earthquakes.

(This would later come back to haunt San Francisco in 1989, when the city was hit with another major earthquake. Although the death toll was lower and the damage less extensive, most of the severe destruction happened in the same places as the 1906 quake. This finally forced authorities to change the seismic code and rethink how buildings were constructed there.)

Another thing that made the 1906 earthquake notable was the fact that it was one of the first natural disasters to be thoroughly recorded in photographs. According to Business Insider, most of the photography captured in the aftermath of the earthquake was quite spontaneous.

Amateur photographer Louis P. Selby was working at his family confectionery shop when the quake hit San Francisco. Selby left the building with his camera and started photographing his disastrous surroundings. The images were only published over a century later by his grandson.

Ultimately, the San Francisco earthquake left hundreds of thousands of unsuspecting citizens without food, water, or shelter. While the military set up refugee camps to help people get back on their feet as the city rebuilt, many residents opted to leave the city entirely — never to return.

In the years since then, there has been some debate about the specific figures pulled from reports on the 1906 quake. Since the instruments used to measure earthquakes weren’t as advanced then as they are now, some question the quake’s true magnitude. While many believe it was 7.9 on the Richter scale, others think it was as low as 7.7 — or as high as 8.3.

But regardless of how powerful the magnitude was, there’s no question that the earthquake was an unspeakable tragedy. Even today, it remains infamous as one of the most destructive natural disasters in American history.

After reading about the 1906 San Francisco earthquake, see the unbelievable aftermath of the Nepal earthquake of 2015. Then, check out 55 stunning photos of San Francisco in the 1960s.