PE teacher Khing Hnin Wai was filming in her usual location not far from parliament when she captured history in the making. 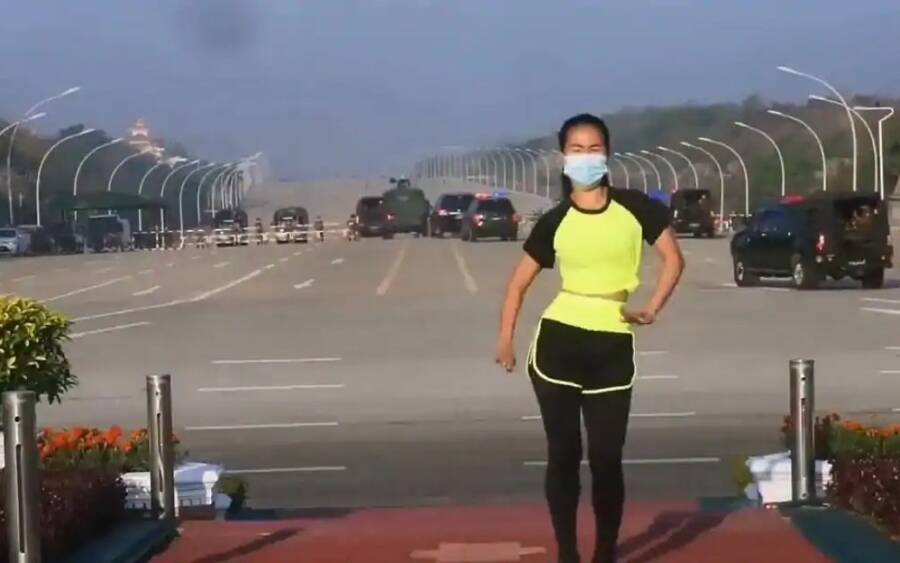 It was shortly after dawn on Monday that Myanmar’s military staged a coup and took control of the country. After a convoy of black SUVs careened toward Parliament, top officials like de facto leader Aung San Suu Kyi were detained. In a bizarre sign of our times, one aerobics teacher accidentally caught the whole thing on video.

As Khing Hnin Wai was filming her exercise routine, the coup was captured playing out in the background behind her. According to The Guardian, the instructor didn’t even realize what she had captured that day until the video went viral on social media — with astounded viewers in disbelief that the footage was real.

According to Al Jazeera, Hnin Wai was just as shocked by the fortuitous timing of the video as everyone else. A resident of Myanmar’s capital Naypyidaw, she started filming her lessons in the picturesque location before the nation’s parliamentary building 11 months ago.

Little did she know that the road behind her, which leads up to a security checkpoint for the Assembly of the Union, would make her Twitter famous.

The video managed to yield more than 630,000 views on Facebook, with the most popular tweet garnering more than 11.7 million views within 24 hours. Perhaps most fascinating about the video, however, is how oddly in tune her choreography is with the events unfolding behind her.

“How harmonic with the background music and background scenery!” Hnin Wai wrote. “Before I heard the news in the morning, the video I made for the aerobic dance competition has become an unforgettable memory.”

At one point, the energetic electro-pop song Hnin Wai chose rises in momentum just as the flood of ominous SUVs multiply in the background. The enthusiastic mood of the song itself lies in stark contrast to the seriousness of the event behind her.

Hnin Wai’s video was not without criticism, however, and she explained that she in no way aimed to disrespect anyone, but found the video worth sharing.

“I wasn’t dancing to mock or ridicule any organization or to be silly,” she later wrote. “I was dancing for a fitness dance competition. As it isn’t uncommon for Naypyidaw to have an official convoy, I thought it’s normal so I continued.” 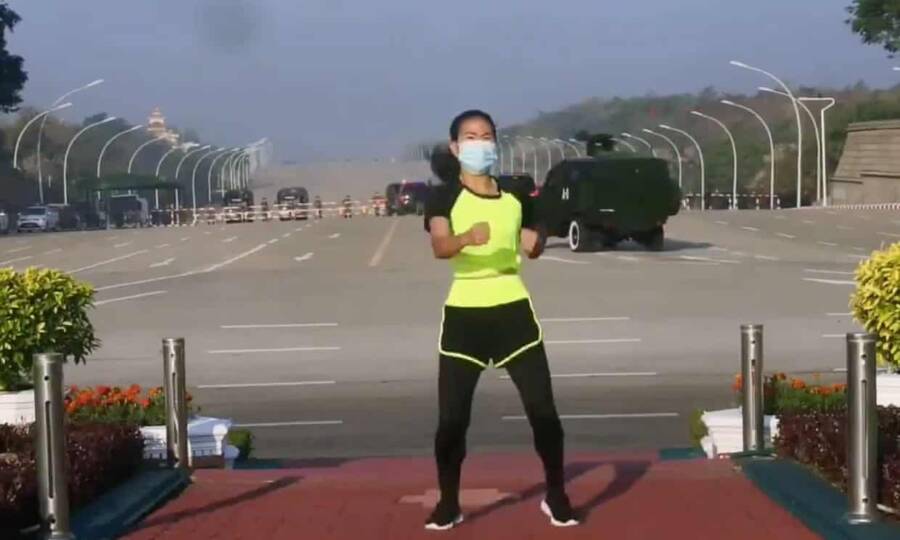 FacebookHnin Wai made sure to clarify she didn’t mean to disrespect any group or political power with her video — it was simply a coincidence.

The coup has reversed a 10-year period of democracy in Myanmar that began following 50 years of military rule. The coup was reportedly staged following the military’s refusal to accept the results of the nation’s November 2020 parliamentary polls.

As it stands, Senior General Min Aung Hlaing has “legislative, judicial and executive powers” in his hands, and has cut off the internet, shut down banks, the stock market, and seized control of the airports. The coup then declared a state of emergency, which will see Hlaing govern for a period of one year.

Suu Kyi, who was once widely considered a democratic freedom fighter, has fallen from grace on the world stage in recent years. She has been accused of jailing journalists and rationalizing her nation’s genocide of Rohingya Muslims. On the other hand, Myanmar’s military has been sharply demonized by critics, as well.

As it stands, one miraculous aerobics video has brought worldwide attention to these matters — a true testament to how information is spread in the digital age.

After watching this Myanmar aerobics instructor unwittingly dance through a military coup, check out the 2,000 surviving temples of Bagan in Myanmar. Then, learn about three countries where military coups (eventually) brought back democracy.