Inside The Mysterious Death Of Alfred Loewenstein, The Multimillionaire Who ‘Fell’ Out Of His Own Plane

Belgian financier Alfred Loewenstein was the third-richest person on Earth when he supposedly fell out of his private plane on July 4, 1928, in a bizarre “accident” that left aviation experts baffled. 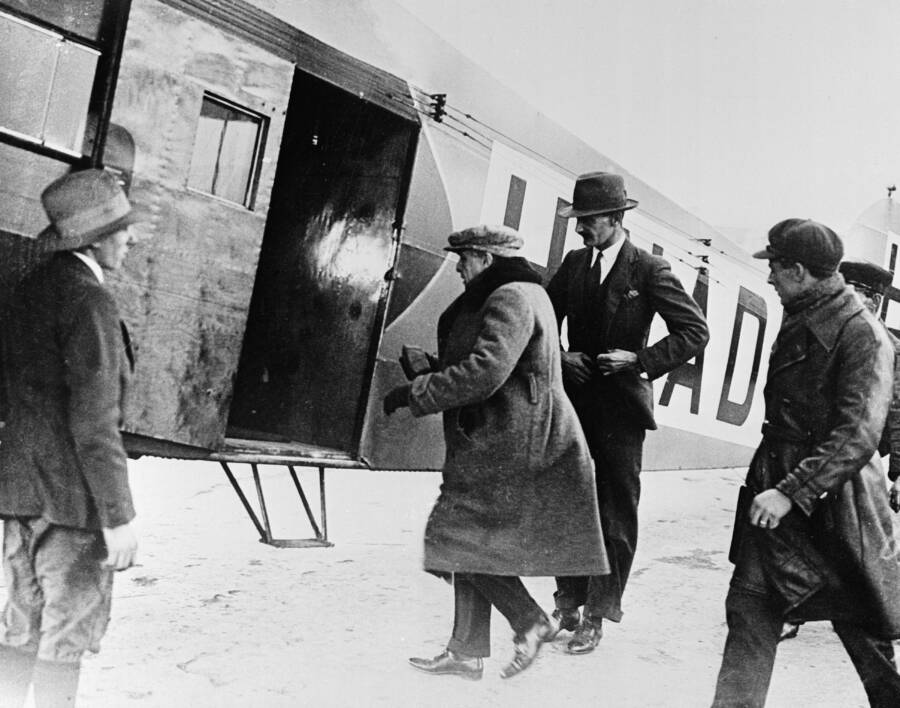 Bettmann/Getty ImagesA professional airman himself, Alfred Loewenstein mysteriously fell out of an airplane in 1928.

The disappearance of Alfred Loewenstein is one of the most baffling mysteries in modern American history. The third-richest man in the world, the Belgian-born banker epitomized the wealth and excess of the Gilded Age. One year before the 1929 stock market crash led to the Great Depression, however, he vanished by allegedly falling out of an airplane.

On July 4, 1928, Loewenstein boarded his private plane and departed Croydon Airport in England to return to Brussels. It was a routine trip that he took quite often with his staff. The skies were clear as Loewenstein rose to use the lavatory, only to reportedly mistake the rear aircraft exit for the door and step right out of the plane.

Loewenstein’s pilot, mechanic, and four passengers were allegedly unaware of what had happened until his secretary Arthur Hodgson found the rear door flapping in the wind. But the mystery of what truly happened to Alfred Loewenstein remains unsolved to this day.

Born on March 11, 1877, Alfred Léonard Loewenstein came from a long line of blue-blooded bankers. Taught well by his father Bernard, a German-Jewish financier, he established the Belgian-based banking concern Société Internationale d’Énergie Hydro-Électrique — which targeted developing nations across the globe.

By supplying third-world countries with electric power facilities, Loewenstein made a fortune. He invested in commodities like synthetic silk precisely before they skyrocketed. With a passion for aviation and hundreds of flights under his belt, Loewenstein was christened the “flying financier” of Belgium.

When World War I erupted, Loewenstein had become one of the most powerful men in Europe. This was evident when, after the Belgian government went into exile as a neutral country following Germany’s invasion, Loewenstein offered the government $50 million without interest — to buy all the country’s debt himself. 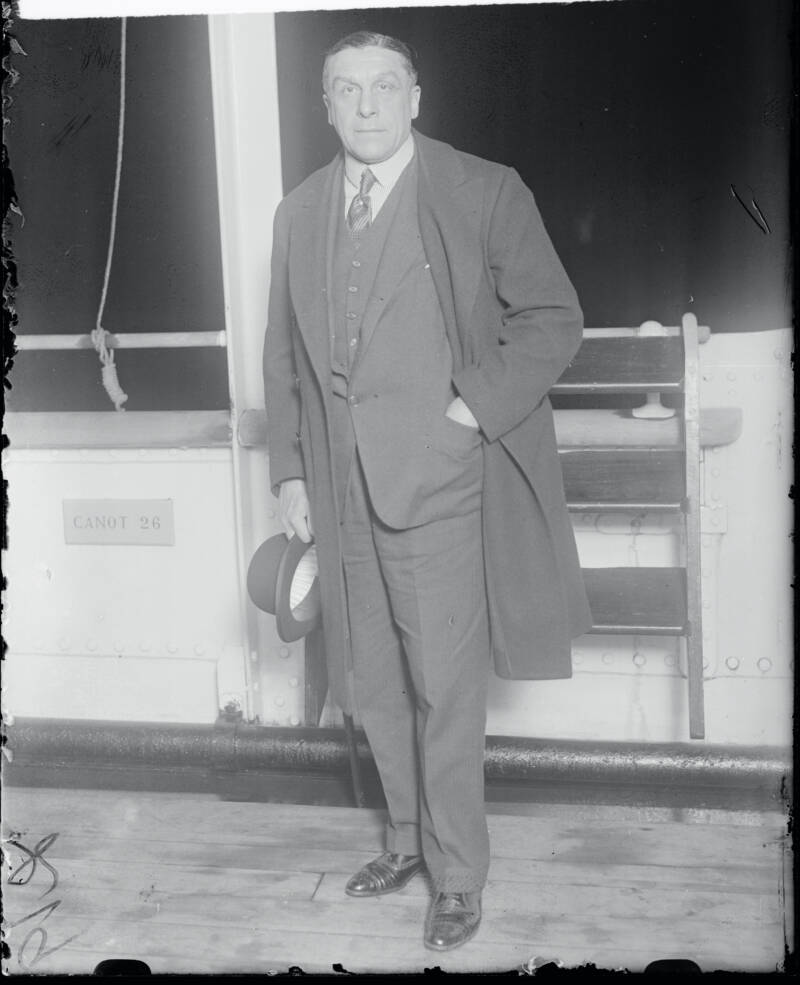 Bettmann/Getty ImagesLoewenstein controlled rubber plantations in the Congo, coal properties in Germany, and was a chief shareholder in Belgium’s railway system.

With the offer declined, he moved to England and opened a holding company in 1926. One investment during the roaring 1920s alone earned him more than $1 million. He was now being consulted by heads of state, and was made a “Companion of The Most Honourable Order of the Bath” by the British government.

Alfred Loewenstein also became known as the “mystery man of Europe” and the “Belgian Santa Claus.” His private stable of thoroughbreds would win the 1926 and 1928 Grande Steeple-Chase de Paris competitions. Right before his death, the third-richest man reportedly had his sights set on profitable deals in America.

“I have always made use of what are called American methods,” said Loewenstein. “I like American energy and American efficiency. In many ways my point of view is similar to that of the American businessman; that is why I like to deal with him and feel at home in his country.”

The World’s Third-Richest Man Falls From The Sky

The airplane was cruising over the English Channel at an altitude of 4,000 feet when Loewenstein excused himself to go to the lavatory. He never returned from the rear of the plane, and when his absence was discovered, Drew made an immediate emergency landing on a beach near Dunkirk. 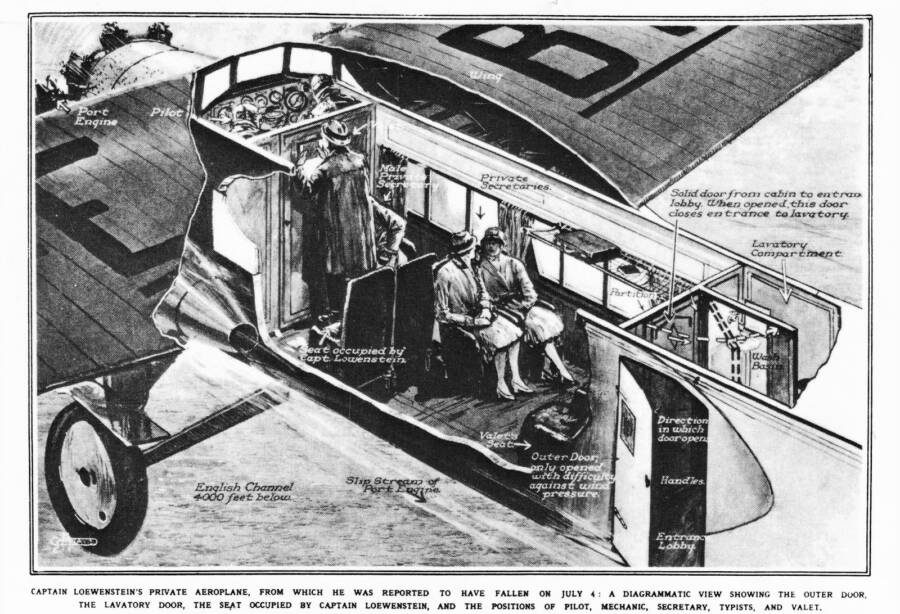 Seized by the French military which occupied the territory, all six passengers were questioned. The British Air Ministry conducted tests on the plane on July 12, concluding it would’ve been impossible to open the rear door without the slipstream slamming it shut. Loewenstein’s body was fished from the water near Boulogne a week later.

Identified by his wristwatch, Alfred Loewenstein’s body showed no signs of foul play. His fractured skull and broken bones were blamed on the impact, and his death was ruled an accident. Still, theories proliferated that he had been killed at the behest of his inheritors or committed suicide before his empire collapsed.

“Even supposing he had lost a few tens of millions of francs,” one his friends argued, “that would never have influenced him to take the leap into the void.”

Ominously, his son Robert would shoot one of his servants for mysterious reasons a few years later — and also die in an airplane accident in 1941.

Before Alfred Loewenstein’s death, the friend of kings and colossally wealthy tycoon controlled rubber plantations in the Congo, coal properties in Germany, and was a chief shareholder in Belgium’s railway system. And while to this day, there is no official indication of foul play, Loewenstein had certainly made his enemies — who stood to benefit vastly from his fall.

After learning about Alfred Loewenstein, read about Emanuela Orlandi’s chilling disappearance from the Vatican. Then, learn about 11 mysterious disappearances that remain unsolved to this day.