Vanished From The Vatican: The Disturbing Story Of 15-Year-Old Emanuela Orlandi

From the Mafia to a Vatican pedophile ring, the suspected culprits behind the 1983 disappearance of Emanuela Orlandi make this a truly chilling tale.

Emanuela Orlandi has been missing since June 22, 1983, when this 15-year-old daughter of a Vatican official was last seen after a music class in Rome.

Theories surrounding Orlandi’s disappearance have seen amateur sleuths point the finger at culprits ranging from the Catholic Church to the Mafia to a Turkish fascist group. And though the mystery has never been solved and her body has never even been found, the case has gained renewed attention thanks to chilling new evidence.

Listen above to the History Uncovered podcast, episode 1: The Disappearance of Emanuela Orlandi, also available on iTunes and Spotify.

A promising 2019 lead involving Vatican City bones believed to be hers seemed to point authorities in the right direction for the first time in more than 35 years, though investigators’ hopes were quickly dashed once again. Today, the disappearance of Emanuela Orlandi remains no closer to being solved — and no less haunting of a mystery. 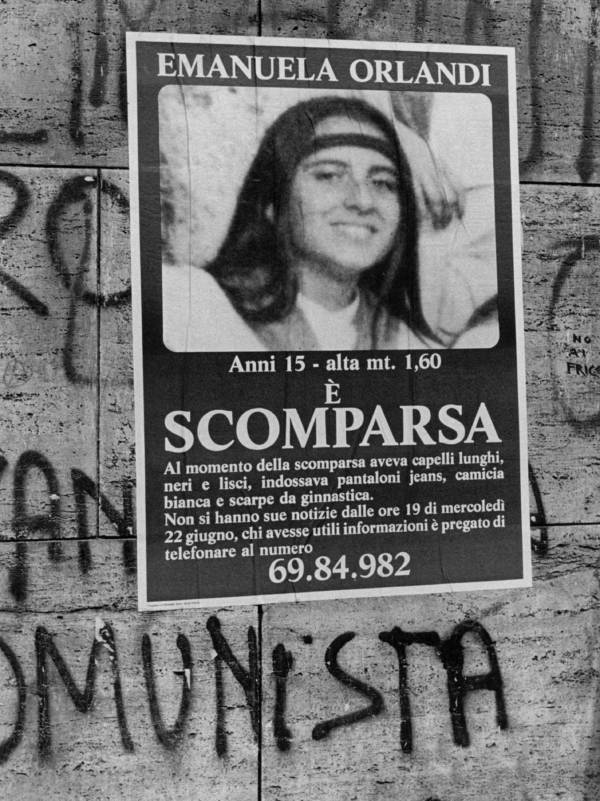 “We thought we were in the safest place in the world,” recalled Emanuela Orlandi’s brother Pietro of their Vatican upbringing. And though they lived in a small, tight-knit community where their father was a powerful official, their home turf proved anything but safe on June 22, 1983.

She’d been taking flute lessons three days a week at a local music school and that’s precisely what she was doing on the day that she vanished. She made it to class and called her sister afterward, but never showed up back at home. That call to her sister was the last known contact anyone ever had with her. 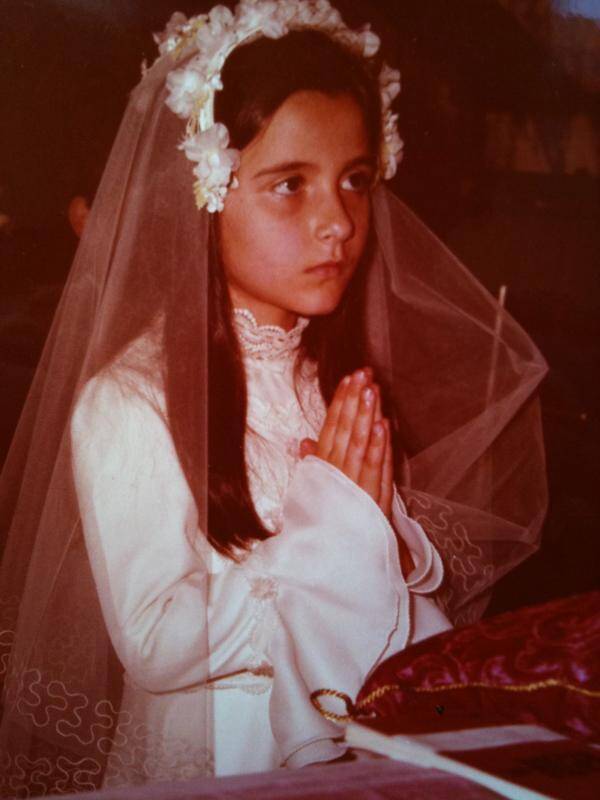 ROPIEmanuela Orlandi praying as a little girl. Though the Vatican City bones supposedly uncovered in 2019 gave investigators hope of solving the mystery of her disappearance, the lead quickly proved to be a dead end.

Emanuela Orlandi was officially declared a missing person the next day and the investigation was now underway as a number of tips quickly rolled in. Two tips in particular — one on June 25 and another on June 28 — seemed like they might lead investigators in the right direction.

The first caller, referring to himself as “Pierluigi,” said he’d seen Orlandi in Rome that day and actually provided details about her flute and her clothing that made investigators believe he was telling the truth. He added that the girl was calling herself “Barbarella” and had run away from home to sell Avon products, which is something Orlandi had mentioned to her sister before disappearing. 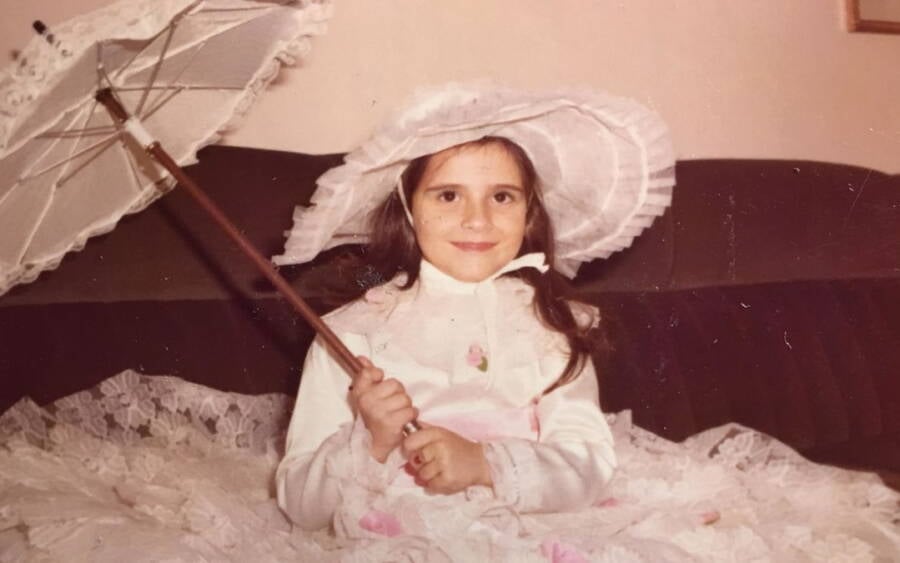 Pietro Orlandi/CNNEmanuela Orlandi, pictured here as a child, about a decade before her 1983 disappearance.

The second caller, on June 28, told authorities that he had also met a young woman similarly named “Barbara” who had run away from home. This man claimed to have seen her at a bar near the music school, lending some credence to his story.

But then, subsequent tipsters started talking about a conspiracy involving a Turkish terrorist group called the Grey Wolves and their plan to kidnap and then exchange Emanuela Orlandi for one of their own, an assassin who’d been imprisoned for shooting the pope two years earlier.

Perhaps there was no more to this case than a teenage girl who’d decided to run away. 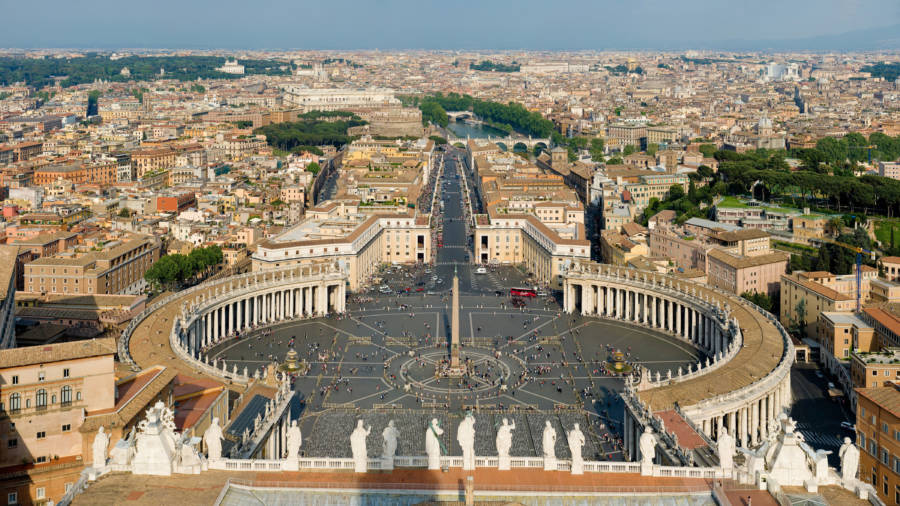 Besides those involving the Turkish terrorist group, there is no shortage of intriguing theories surrounding Emanuela Orlandi’s disappearance and presumed death. With the Vatican and the surrounding area a hub of both religious power and Mafia power, those groups most often come under suspicion.

The Mafia theories largely revolve around a Rome-based criminal syndicate known as the Banda della Magliana, led by Enrico De Pedis. The theory states that the syndicate had loaned large sums of money to the Vatican Bank but weren’t being paid back what they were owed, so they decided that taking a Vatican official’s daughter for ransom was the way to get their money back.

Anonymous tips to authorities have come in supporting this theory and De Pedis’ one-time girlfriend later went on the record claiming that he told her that he had indeed kidnapped Orlandi. However, hard evidence is thin and a police search of the gangster’s tomb — which one tipster claimed would contain DNA evidence proving the theory — turned up nothing. 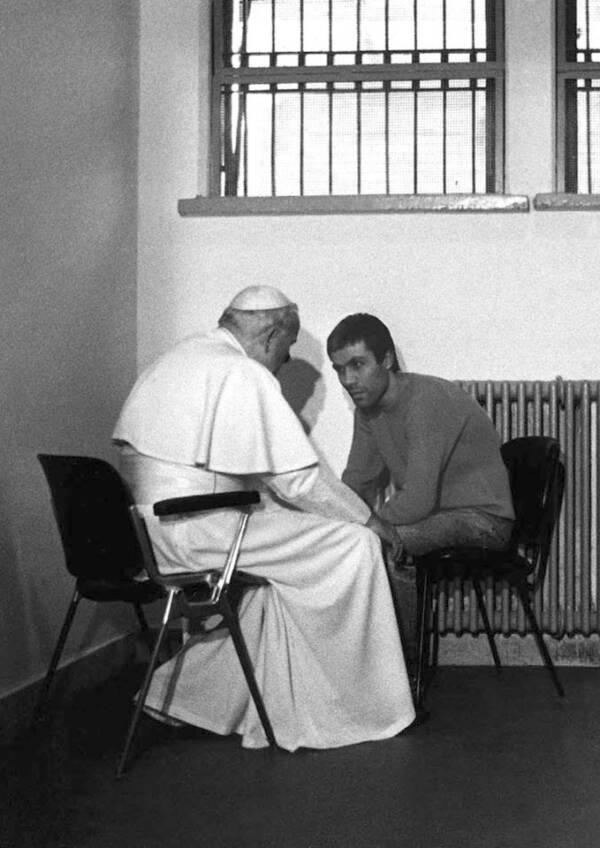 The evidence for the Grey Wolves theory seems to have more evidence behind it. Grey Wolf Mehmet Ali Ağca had tried to assassinate Pope John Paul II in the Vatican on May 13, 1981, shooting him four times but not managing to kill him, and was captured immediately.

Several anonymous calls to authorities in the weeks following the disappearance suggested that the Turkish terrorists were holding Orlandi in hopes of exchanging her for Ağca. One particular set of calls from a man identified by authorities as “The American” (due to his accent) even identified the June 25 and June 28 tipsters as part of his organization and spoke of an actual plan for the exchange for Ağca within 20 days. However, the Vatican didn’t take the calls seriously and nothing ever came of it.

But perhaps the most disturbing theory about the Orlandi case states that the Vatican, local police, and regional lawmakers had a plot to kidnap young girls like Emanuela Orlandi and force them into sexual servitude. These sex parties, the theory claims, also involved foreign diplomats, The Telegraph reported. 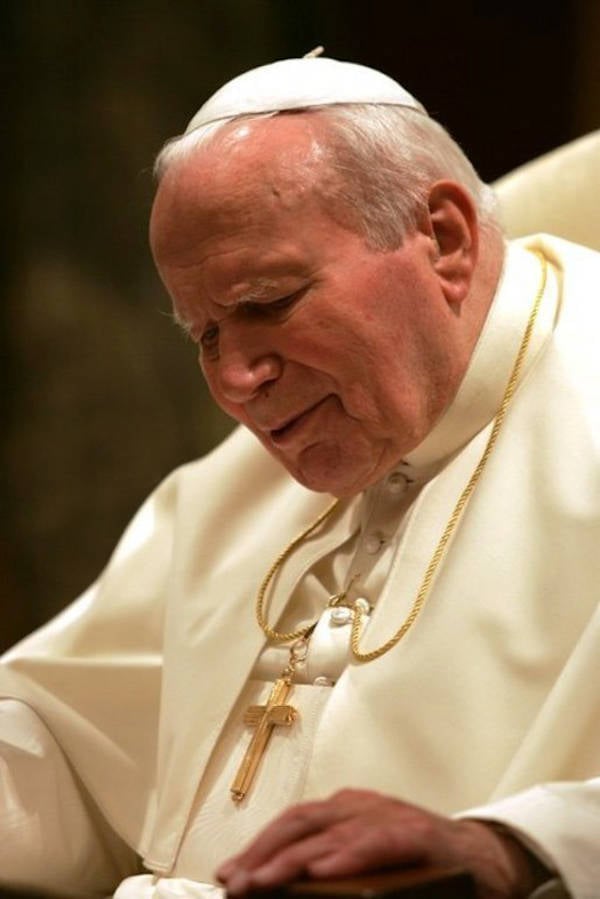 Wikimedia CommonsThe late Pope John Paul II, who has been involved in at least two of the predominant theories surrounding the disappearance of Emanuela Orlandi. June 2004.

The allegation isn’t entirely dismissible, as the one who came forth with it was Father Gabriele Amorth — the Vatican’s chief exorcist, who was appointed by John Paul II himself. Amorth said Orlandi was sexually abused and eventually killed and disposed of.

“This was a crime with a sexual motive,” he said. “Parties were organized, with a Vatican gendarme acting as the ‘recruiter’ of the girls. The network involved diplomatic personnel from a foreign embassy to the Holy See. I believe Emanuela ended up as a victim of this circle.”

But whatever the motive, Orlandi’s family has been largely focused on recovering her remains and finding some kind of closure. And plenty of those kinds of tips have come in since 1983.

An NBC News report on the 2019 lead in the Emanuela Orlandi case.

Over the nearly four decades since Emanuela Orlandi disappeared, authorities have followed countless leads and fielded scores of tips in hopes of finally putting this mystery to bed. And perhaps no tip was more exciting than that of the 2019 letter claiming to reveal her final resting place.

Orlandi family lawyer Laura Sgro received an incredibly ominous note early that year that contained a photograph of a tomb beneath the Vatican — and directions to “look where the angel is pointing,” in reference to the marble angel guarding the crypt in question.

The anonymous tip garnered the attention of the Vatican’s highest-ranking officials, with spokesman Alessandro Gisotti chiming in to diplomatically address the situation. “I can confirm that the letter by Emanuela Orlandi’s family has been received,” said Gisotti, “and the requests it contains will be studied.” 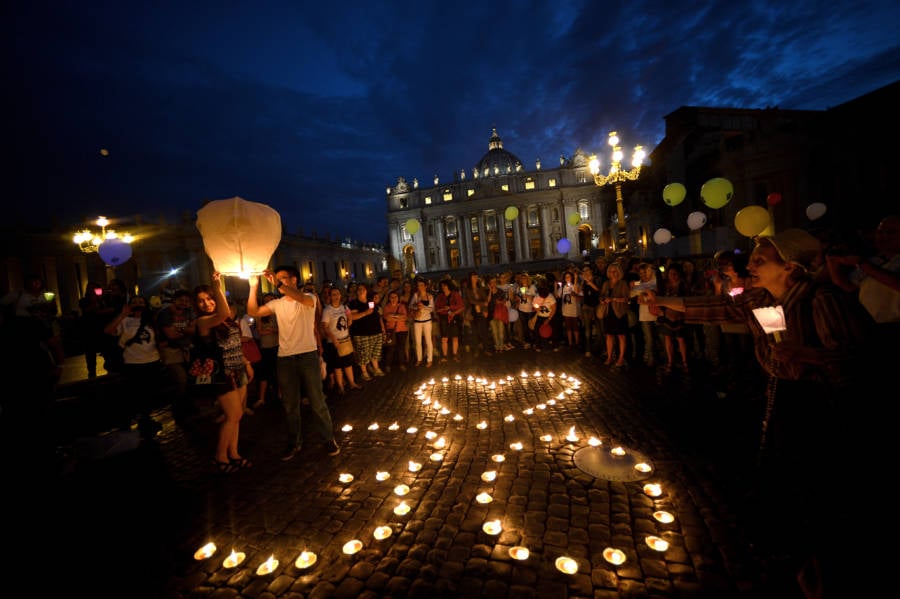 FILIPPO MONTEFORTE/AFP/Getty ImagesCrowds participate in a vigil on the 30th anniversary of the disappearance of Emanuela Orlandi in Saint Peter’s Square, Vatican City. June 22, 2013.

What made this tip especially intriguing is that scientific tests on the tomb following the delivery of the letter suggested that the tomb had been opened at least once recently enough for Orlandi’s remains to have been stashed inside. Furthermore, in a letter to the Vatican, Sgro said that she had been able to “verify that some people knew there was a chance Emanuela Orlandi’s body had been hidden in the [tomb].”

There was even additional evidence that unidentified visitors had been frequenting this particular tomb as flowers had been left behind at the site.

All that was left to do was search the crypt and see if the remains of Emanuela Orlandi were actually inside.

The Future Of The Investigation 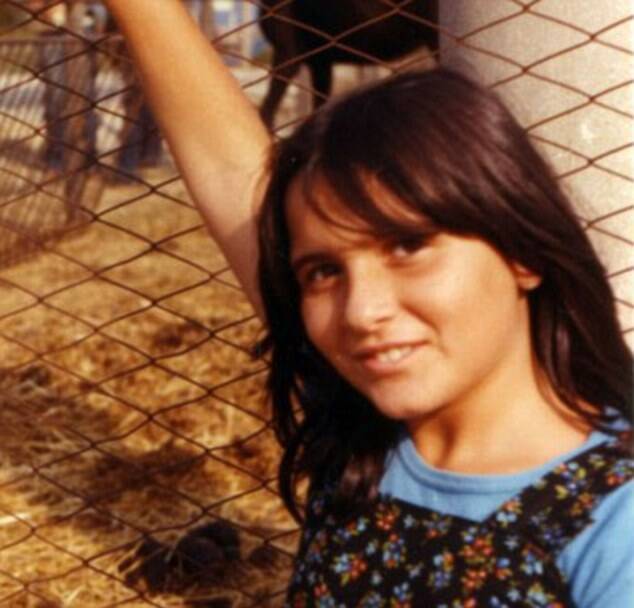 TwitterOnly recently have Vatican officials finally begun cooperating in any way with the search for the remains of Emanuela Orlandi, according to her brother, Pietro.

When the angel letter came to light in 2019, it wasn’t the first time that the Orlandi family had gotten their hopes up thanks to an anonymous tip. Most recently, the family collectively held its breath when the Vatican discovered human remains on its property in October 2018 — only to be left disappointed when the remains turned out to belong to unrelated victims.

Sadly, this is what happened once again in July 2019 when the search of the tomb turned up no remains.

“There were no human remains nor funerary urns,” said Vatican spokesman Alessandro Gisotti. The tomb led to an expansive underground space that was “completely empty,” and “had no human remains.” 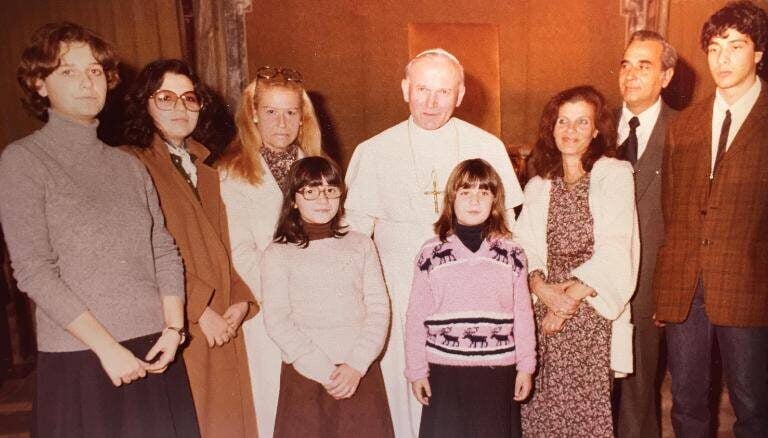 For the Orlandi family, who had been searching for the missing girl’s remains with much dedication and patience for nearly four decades, it was a huge blow.

“We expected everything today, but not to find two empty tombs,” said Sgro on behalf of the family. “We want to know why we were sent there, and why there was nothing.”

For his part, brother Pietro Orlandi said, “Part of me was relieved that Emanuela was not there,” adding that his family has gotten used to the “illusions and disillusions” of this wild goose chase.

“Still,” he said, “I was surprised that there was nothing at all.” 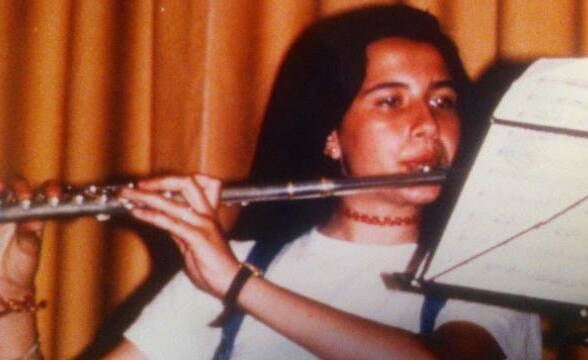 Pietro Orlandi/CNNEmanuela Orlandi disappeared on her way home from a flute lesson. She’s pictured here playing her instrument not long before her disappearance.

But though nothing was found, it remains noteworthy that the Vatican showed a sudden change of heart in terms of their cooperation in this matter. Pietro Orlandi said he asked the Vatican multiple times to assist in the search for his missing sister and was “positively surprised” when they finally gave in.

“For the first time in 36 years, the Vatican has concretely done something important,” which “signals a change of position.” He explained that when he asked Pope Francis for help in 2013, he was merely told that his sister was “in heaven” and that was that.

Pietro Orlandi even speculated the Vatican’s refusal to help seemed like “an admission that there is a possibility of internal responsibility” on their part.

But even with the Vatican’s cooperation, the case of Emanuela Orlandi’s disappearance has once again gone cold. But the search will continue at least as long as the missing girl’s family is around to keep hope alive.

“Even if nothing was to be found,” Pietro Orlandi said before the tomb was opened in 2019, “it cannot be the end of the story.”

After learning about the vanishing of Emanuela Orlandi and the msytery of the Vatican City bones, read about the disappearances of Maura Murray and Jennifer Kesse.