Despite their 255-year age difference, not to mention the fact that one of them is dead, Teague claims the marriage is as normal as any other union. 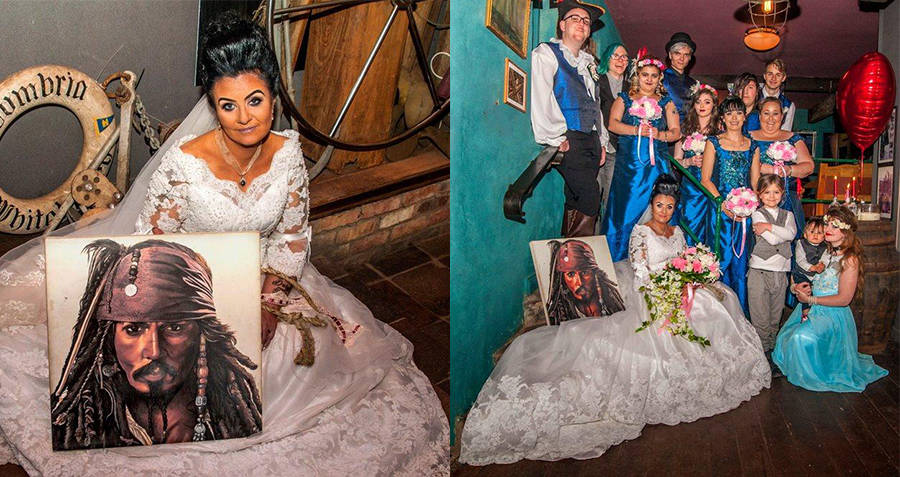 NewsweekAmanda Teague, the woman who married a 300-year-old ghost.

An Irish woman named Amanda Teague made headlines last week, after revealing that she had married the ghost of a 300-year-old Haitian pirate.

Amanda Teague, 45 years old and unbothered by the 255 year age difference, married the ghost of Jack Teague, a Haitian pirate who allegedly sailed the seven seas in the early 1700s. Ironically, Mrs. Teague works as a Captain Jack Sparrow impersonator in Ireland.

The pair first met – if you can call it meeting – in 2015, when Teague was lying in bed at her home in Drogheda, Ireland. She said she felt a ghostly presence in her room and continued to do so almost every night after. Six months after first feeling the ghost’s presence, Teague said she developed feelings for him. Together, they made plans to wed.

The wedding took place on a stormy day in July of 2016, and was “short, small, and functional.” The registrar who recorded the marriage was present, as was a medium who Jack Teague was communicating through.

“We sailed into international waters so we could legally marry,” Teague said. “It’s not legal in the U.K. or Ireland to marry a deceased person, so we spoke to some lawyers and did it officially.”

To be clear, the marriage is not expressly recognized by the law, though Teague says she followed procedures instructed to her by her lawyers that allowed her to bypass certain rules.

“I haven’t been challenged yet,” Teague said. “There was one government agent who asked me to explain my situation and I told him about spirituality and our connection. He just accepted that.”

“If in the future I am challenged,” she continued, “[legal advisors] have told me that there are certain routes we could go down to try and get our marriage recognized by law. I am willing to do it and fight [for our right to be married].”

Shlomit Glaser, a lawyer who has not been directly involved in the case, said that marrying a dead person and marrying a ghost are two different things – though both unions are not legally recognized.

“It’s not illegal. It’s not a criminal act and you are not committing an offense, but the government doesn’t recognize it. They won’t be allowed the benefits of a married couple,” she said.

Teague, however, remains unbothered by the legal ramifications of the union and is now focusing on the personal relationship between her and her new husband. She claimed that their relationship is no different than any normal one, as they both fight when jealous, argue about responsibility, and take weekend vacations to Dublin together.

Next, check out the story of Amethyst Realm, who claims to have had sex with over 20 ghosts. Then, read about the only time a murder was solved thanks to the victims ghost.