Inside The Shocking Origins Of The ‘America First’ Movement

The original America First Committee began as an anti-war movement devoted to keeping the U.S. out of World War II. But it quickly evolved into something far more ugly.

Donald Trump was not the first leader to rally crowds behind the slogan “America First,” nor was he the only person to ever support it. In fact, at one point during the 20th century, nearly one million Americans were paying members of an organization by that same exact name.

Given the potpourri of participants, it makes sense that one single cause united them: Keep America out of World War II. But the most commonly remembered of the movement’s supporters were vocal anti-Semites. 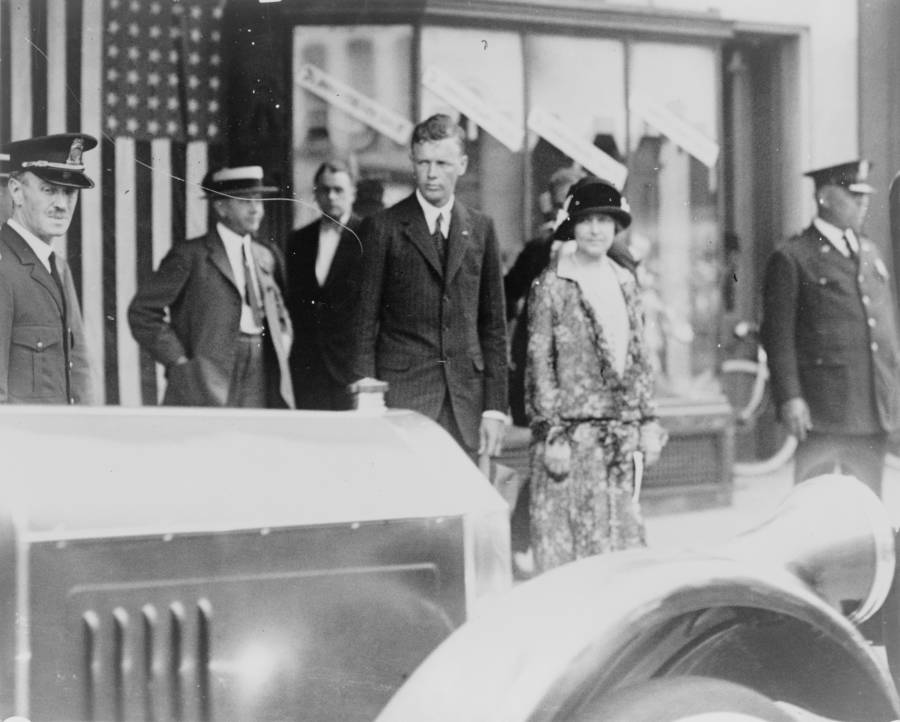 Though the America First Committee initially counted a diverse group that rallied around a common cause, it didn’t stay that way for long.

This was largely due to the group’s most prominent — and controversial — spokesman, Charles Lindbergh. A fiery orator who was strongly opposed to American involvement in World War II, Lindbergh had initially gained fame for piloting the first solo nonstop flight across the Atlantic.

But his speeches for the America First Committee led many to accuse him of being a Nazi sympathizer — or even a full-blown Nazi.

During one infamous 1941 rally in Iowa, Lindbergh said, “The British and the Jewish races, for reasons which are not American, wish to involve us in the war… Their greatest danger to this country lies in their large ownership and influence in our motion pictures, our press, our radio, and our government.”

This anti-Semitic sentiment was by no means echoed by the majority of committee members. In fact, Lindbergh’s speech was met with loud boos. And before long, the once-beloved pilot was decried in the press.

“The voice is the voice of Lindbergh, but the words are the words of Hitler,” the San Francisco Chronicle wrote. And a New York Herald Tribune columnist declared, “I am absolutely certain that Lindbergh is pro-Nazi.”

Meanwhile, famed cartoonist Dr. Seuss criticized the movement as a whole, dedicating an entire series of political cartoons to the infamous committee.

And at the height of the controversy, Texas decided to pass a resolution that banned the pilot from the entire state.

The Decline Of The Isolationist Movement

UC San Diego LibraryDr. Seuss was not a fan of the original America First movement.

Most anti-war Americans did not promote — or at least they did not admit to — harboring any ill will against Jewish people. Rather, they echoed an argument with roots that stretch all the way back to George Washington: America is not the world’s police or the world’s caretaker.

But as the atrocities being committed by Nazi Germany became more well-known in America, the number of anti-interventionists — who had always been in the minority — began to shrink even smaller.

Within that dwindling populace, the America First Committee had to contend with the additional PR problem of being continuously associated with its most radical anti-Semitic members. And on top of all of that, the logic of the group’s founding principles began to look shaky.

Avoiding the war was the safest option for protecting Americans, they had argued. But as Nazi Germany knocked out ally after ally, it became increasingly clear that the United States would never be able to defend itself should it ever have gotten to the point where it was facing Adolf Hitler alone.

Unwilling to bend to this increasingly obvious fact, the group lost nearly all of its moderate supporters and, along with them, its political leverage.

Still — in some ways similar to Donald Trump — Lindbergh persisted in the face of negative coverage. Sometimes, he even cited false statistics, which supposedly showed that most Americans were on his side.

That is, of course, until Pearl Harbor. On December 7, 1941, the attack on American soil made it indisputably clear that America was indeed involved in World War II, whether it wanted to be or not.

How The America First Committee Disbanded

After the attack on Pearl Harbor, the America First Committee was ready to give their support to the United States entering World War II.

“The period of democratic debate on the issue of entering the war is over,” the committee chair announced shortly after the attack. “[The committee] urges all of those who have followed its lead to give their full support to the war effort of the nation, until peace is attained.”

Lindbergh was no exception.

“I can see nothing to do under these circumstances except to fight,” he wrote in his diary a few days after the Pearl Harbor attack. “If I had been in Congress, I certainly would have voted for a declaration of war.”

He went on to fly more than 50 combat missions in the Pacific.

In America, the war triggered a sharp ideological shift away from isolationism. The United States played pivotal roles in forming the North Atlantic Treaty Organization (NATO) and the United Nations (UN). It also established open trade agreements, which ushered in an era of globalization that propelled the world forward at a previously unimaginable rate.

Still — in spite of the past — the pendulum continues to swing. And the United States, along with many of its allies, have begun to question the value of these once-treasured, America-saving bonds.

In recent years, the phrase “America First” has become better known as one of Donald Trump’s slogans, rather than the name of the committee that disbanded decades ago. But while some have insisted that the new slogan is simply a way to promote improving the country and putting its citizens “first,” others say that the dark origins of the phrase cannot be ignored.

After reading about the America First Committee, learn about the life of George Lincoln Rockwell, the founder of the American Nazi Party. Then, check out these true stories from Japanese American internment camps.