America is marked by long stretches of highway, which pass through large, developed cities and small, sleepy hamlets. Wherever your trek takes you, you can be sure to spot a little bit of strange roadside Americana on the way.

From fairy-tale statues to museums dedicated to tinned pork products, travelers can always find an interesting place to stretch, imagine and learn. 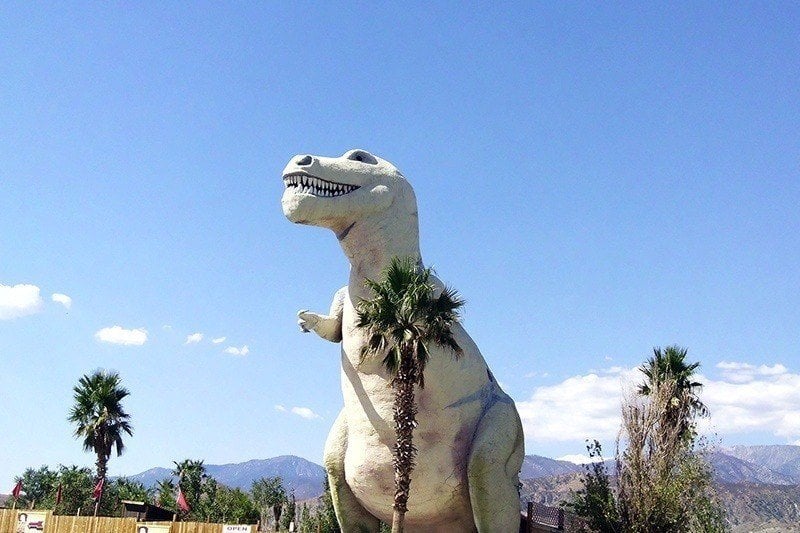 The Cabazon Dinosaurs tower over Interstate 10 in California, right outside of Palm Springs. Claude K. Bell, Knotts Berry Farms’ sculptor, built them to drum up visitors to his restaurant called the Wheel Inn Café. Source: Wikimedia 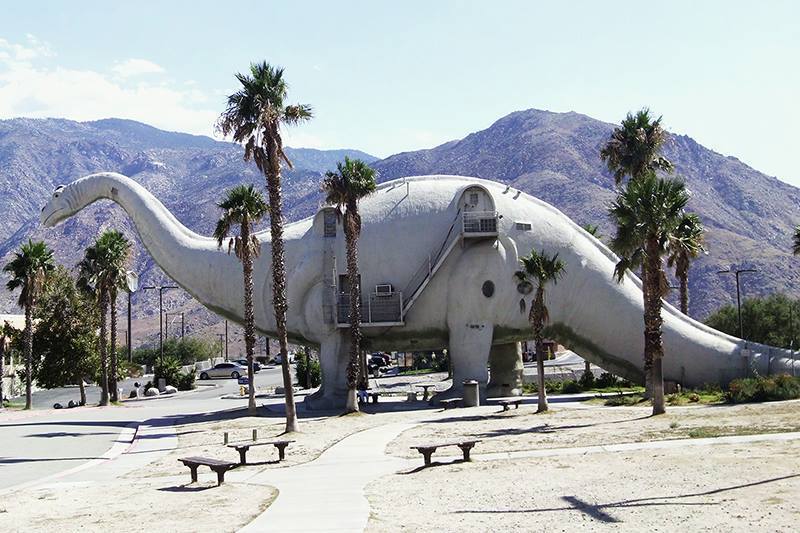 In 1988, Bell died and the attraction was sold to the Cabazon Family Partnership and MKA Cabazon Partnership. They remodeled the dinosaur attraction and soon transformed it into a…creationist museum. However, they did not remove Bell’s original frescos and sculptures that promote an evolutionary viewpoint. Source: Wikimedia 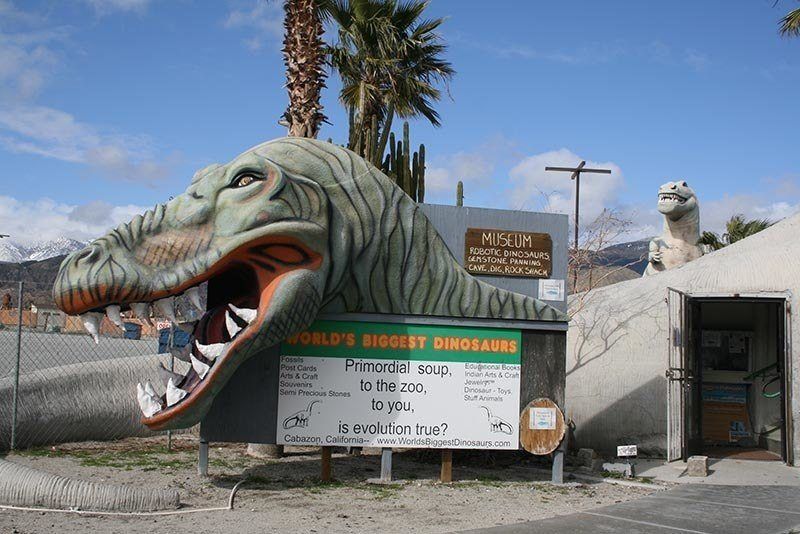 The current ownership expresses a belief in Young Earth creationism that states dinosaurs were created 6,000 years ago, with Adam and Eve. The gift shop in the Apatosaurus’ belly sells dinosaur toys under labels that state, “Don’t swallow it! The fossil record does not support evolution.” Source: Wikimedia 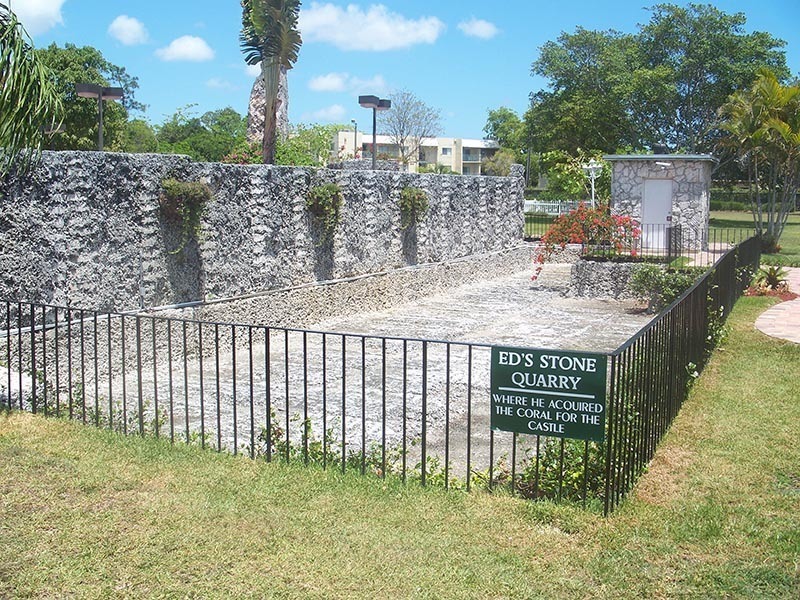 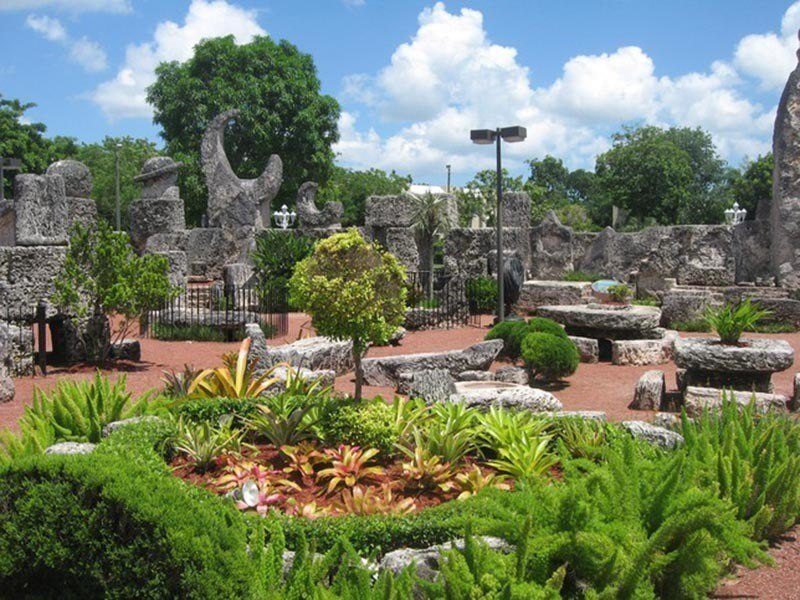 Legend says that he built the castle to impress a young girl who left him the day before their wedding. Leedskalnin was a secretive man who worked by lantern light and never revealed his construction secrets. Source: Virtual Tourist 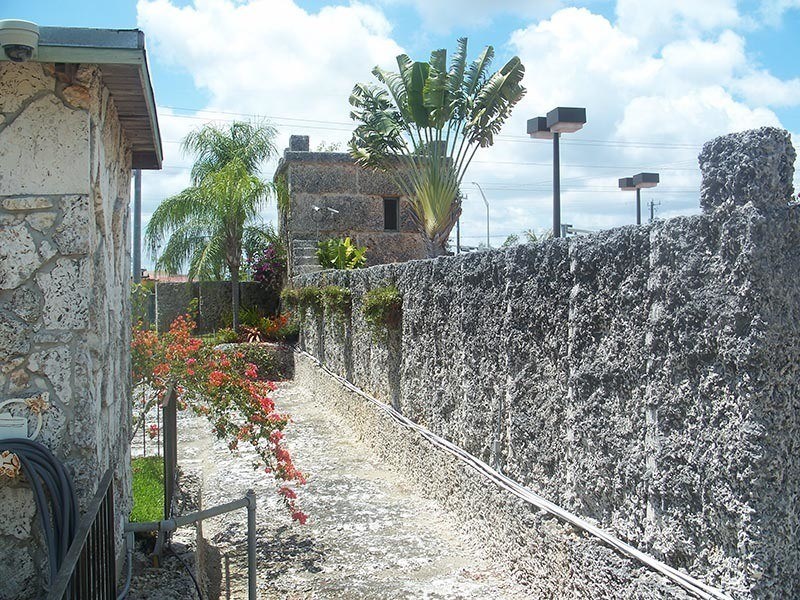 The Castle has many incredible and functional carvings, including an accurate sundial, a Polaris telescope, a barbecue, a bathtub and a table in the shape of Florida. Source: Wikimedia 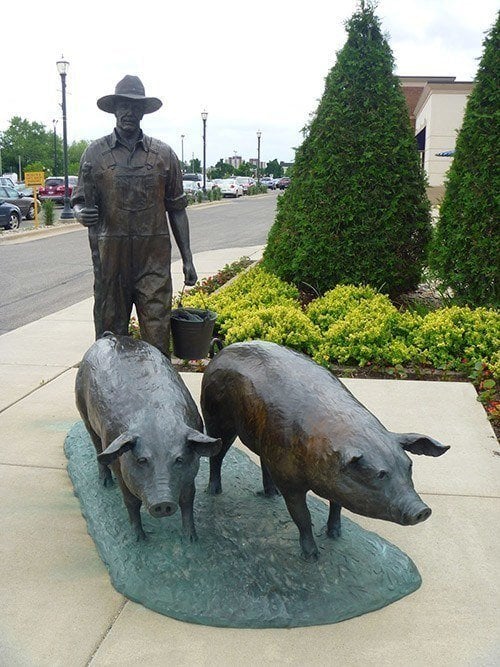 Austin, Minnesota is known as SPAM City USA because Hormel, the parent company of SPAM is headquartered there. It also features a museum dedicated to the mystery meat. Source: Blogspot 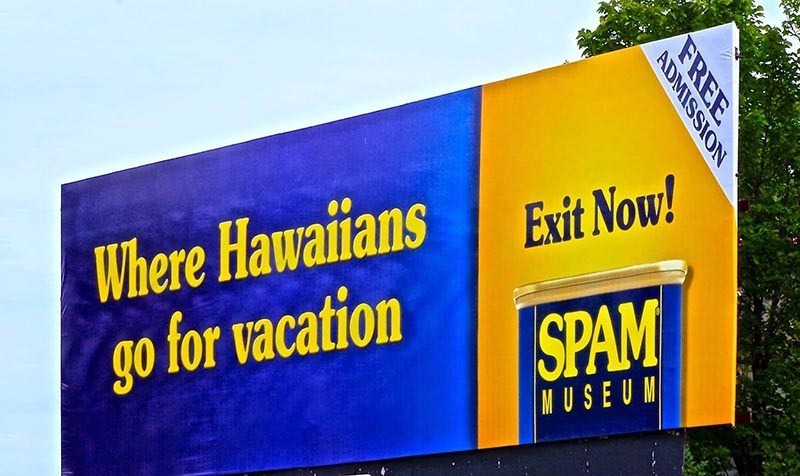 The museum catalogues the history of SPAM and its part in winning World War II. SPAM is sold in 41 countries and is popular in places without reliable refrigeration because of its long-lasting shelf life. Source: Champagne Wishes 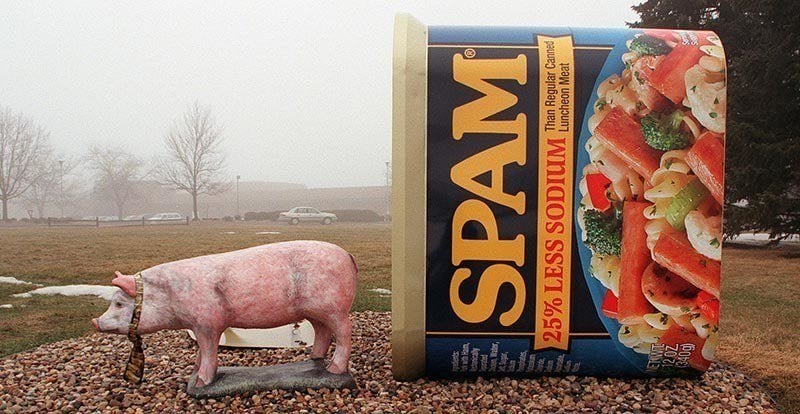 The museum has been entertaining SPAM lovers since 2002. Wanting to improve the visitor experience, the museum closed in September 2014 for renovations and relocation. The new pork-centric museum will open in 2016. Source: Star Tribune 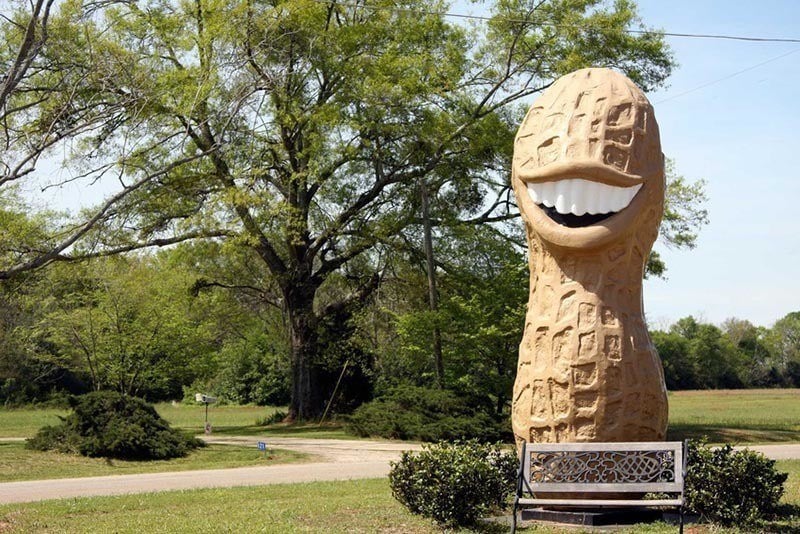 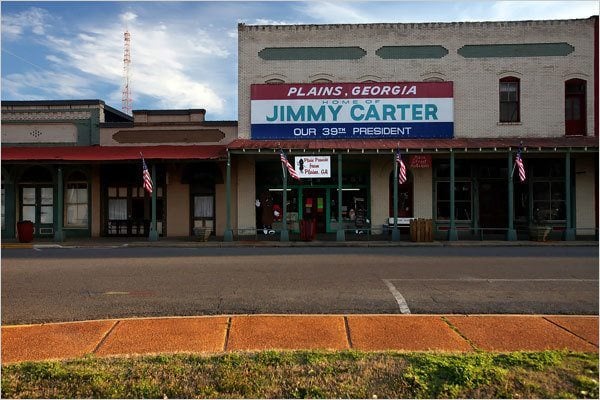 The peanut statue was originally built in Indiana to honor Carter as he visited the state during his 1976 presidential campaign. It was later moved to his hometown. Source: The New York Times 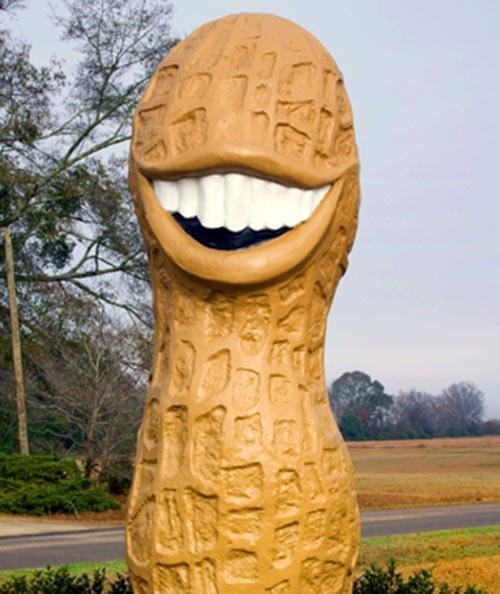 The giant peanut sits outside of a convenience store and welcomes every visitor with its big toothy grin. Tour the rest of Plains to experience Carter’s Georgia, where he still resides. Source: Travel and Leisure 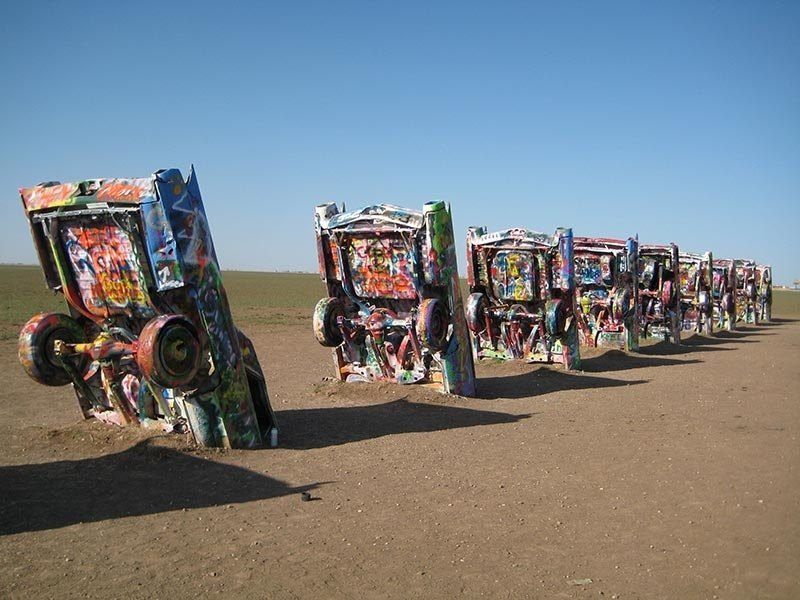 Cadillac Ranch is a sculpture and public art installation built in 1974 by the art group Ant Farm. Cadillacs from 1949 to 1963 are buried nose first in the ground, corresponding to the Great Pyramid of Giza. Source: Wikimedia 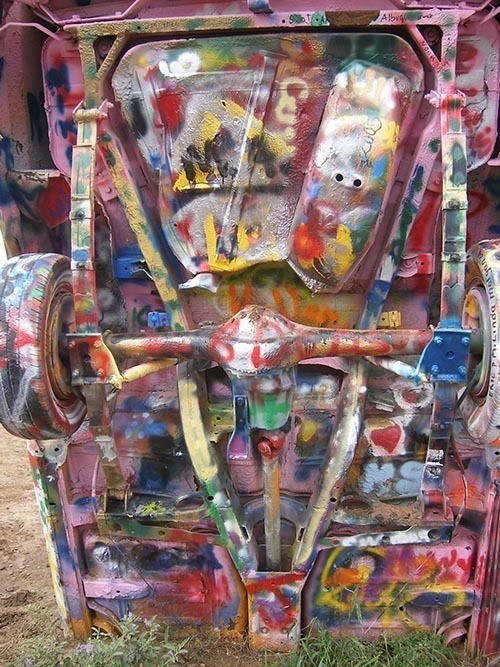 Visitors have spray-painted the cars multiple hues over the years. Source: Wikimedia 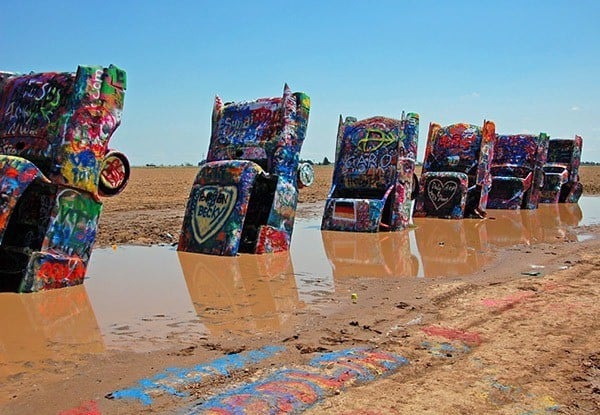 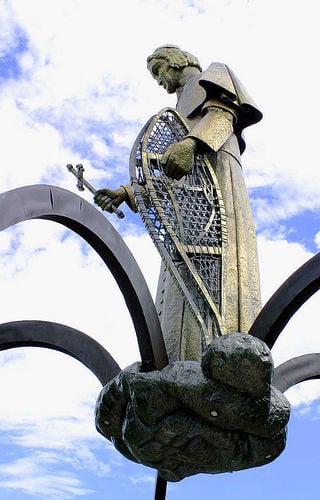 The Bishop Baraga statue towers six stories over visitors like a Catholic Doctor Octopus about to bring the knowledge of snowshoeing. Source: Sacred Heart Radio 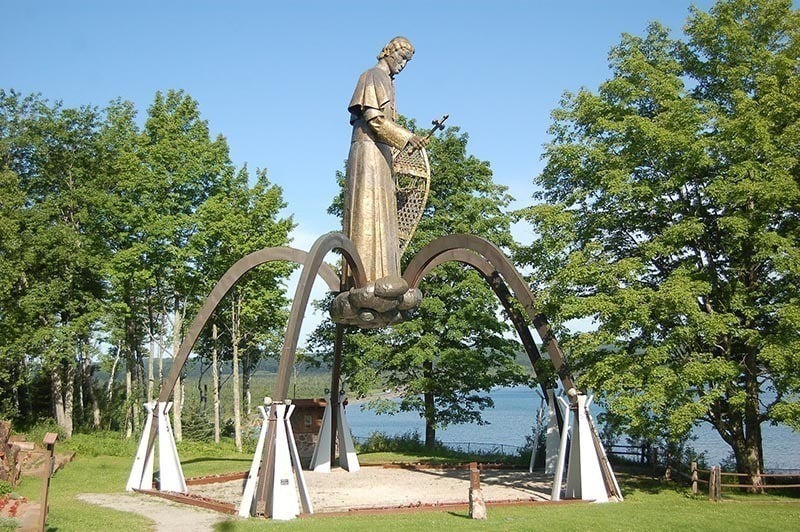 Baraga was a Slovenian priest who came to Michigan to serve as a minister for the Great Lakes Indians and copper miners in 1830, and often traveled by snowshoe. Source: Wordpress 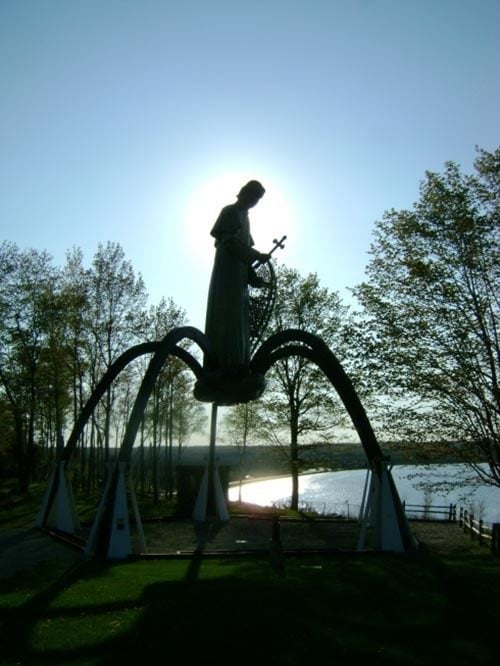 Baraga was the first bishop in the Upper Peninsula and was able to minister to multi-ethnic communities because of his mastery of eight languages. The Catholic Church later deemed him venerable. Source: Blogspot 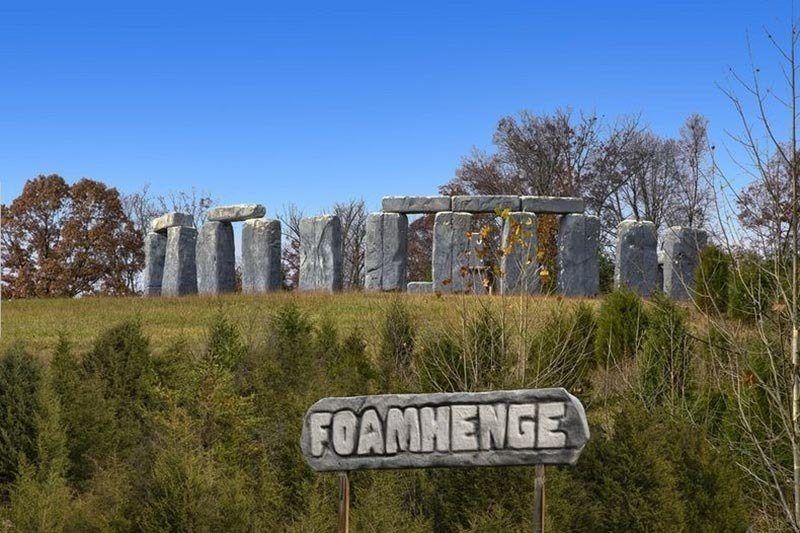 Natural Bridge, Virginia is home to Foamhenge, a full-size foam replica of Stonehenge and its imaginative creator, Mark Cline. Cline is the owner of Enchanted Castle Studio and known for his creative exploits. Source: Amusing Planet 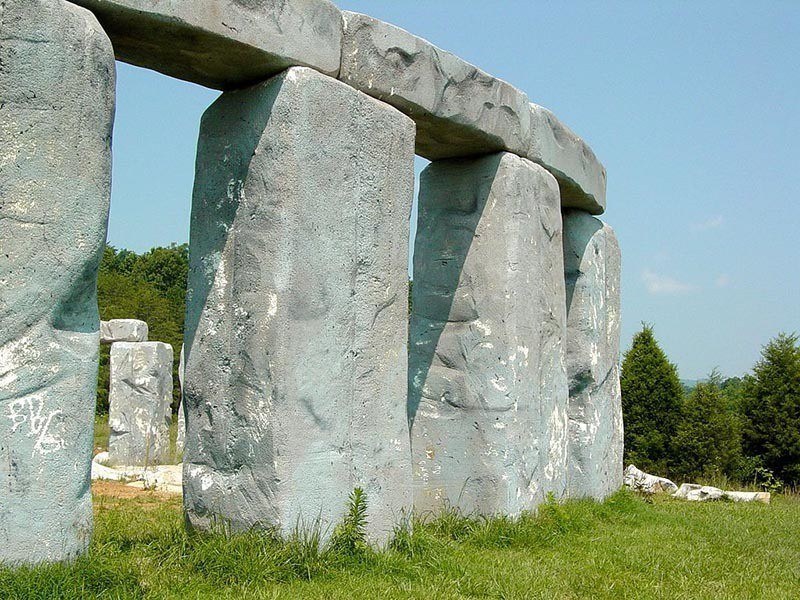 Foamhenge’s “stones” are placed in astronomically correct positions to correspond with the real Stonehenge. Cline considers Foamhenge to be his masterpiece. Source: Wikipedia 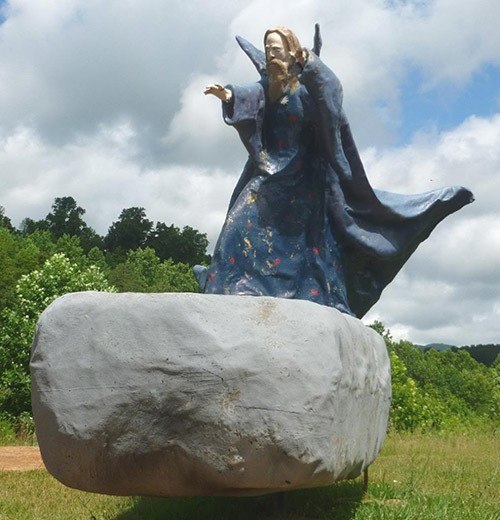 Foamhenge took only 10 days build, but continues to be a favorite destination for visitors. The attraction also hosts a statue of Merlin standing on a floating stone, because why not? Source: Blogspot 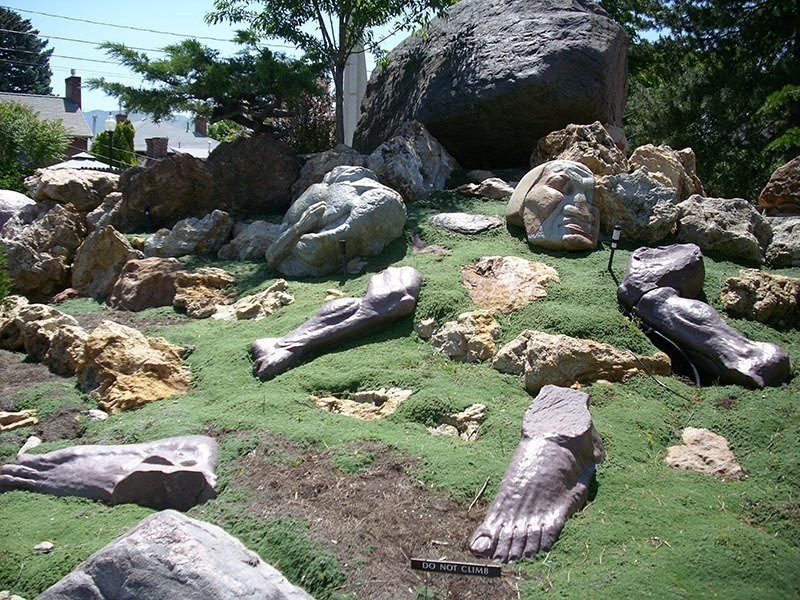 The fascinating Gilgal Garden was the brainchild of Thomas Battersby Child Jr., former bishop of the Church of Latter Day Saints, and seeks to give physical shape to his spiritual beliefs. Source: Wikimedia 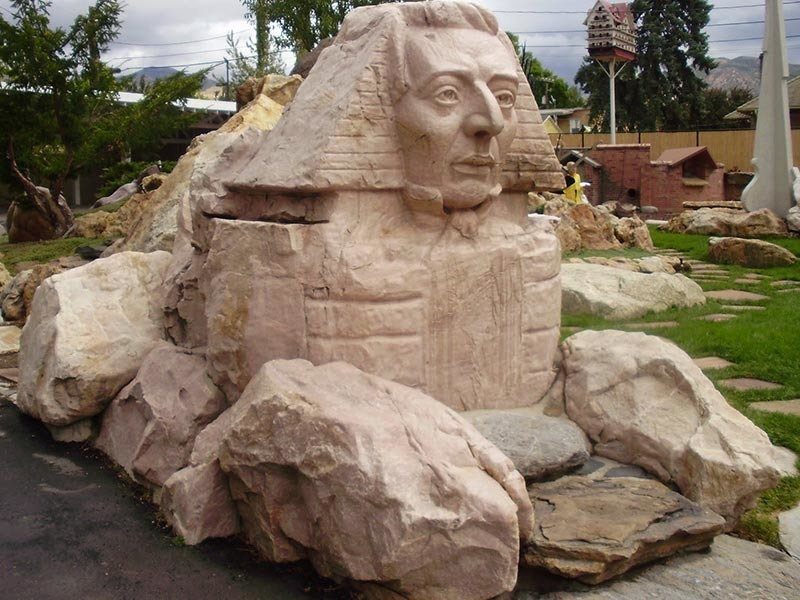 The garden consists of 12 sculptures and over 70 inscribed stones. A sphinx features the face of Joseph Smith, the founder of Mormonism. Source: Blogspot 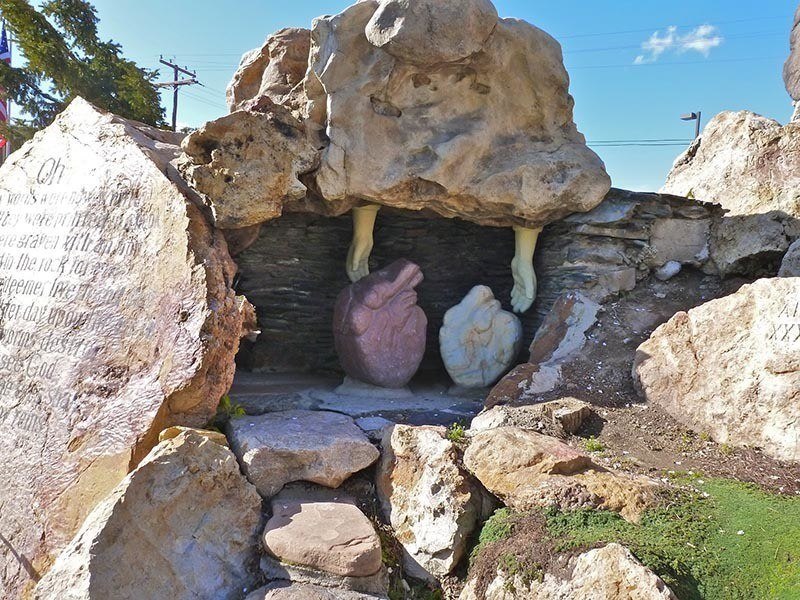 After years of neglect and vandalism, he garden went through a renovation in 2000 and Utah Master Gardeners cleaned up the gardens. Source: Blogspotv 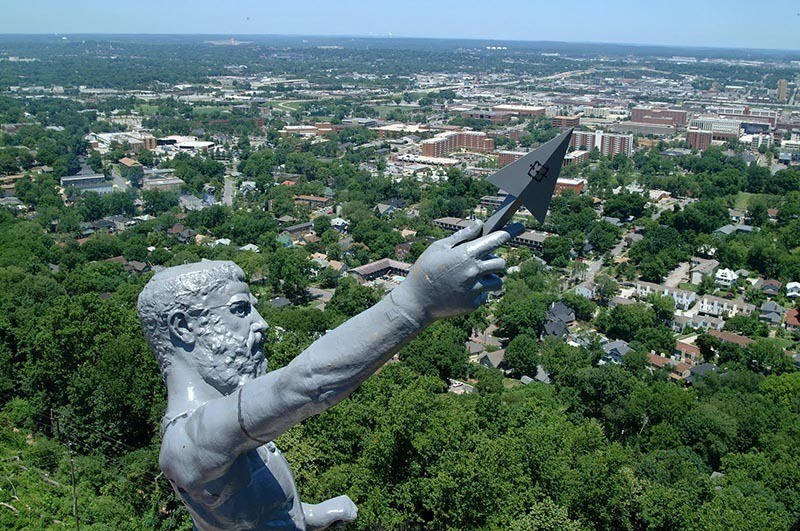 Vulcan is the largest and sexiest cast iron statue in the world. This symbol of Birmingham depicts the Roman god in a backless loincloth and harkens back to the city’s iron and steel industry. The statue was built in 1904 by sculptor Giuseppe Moretti as Birmingham’s entry to the World’s Fair. Source: Birmingham Business Alliance 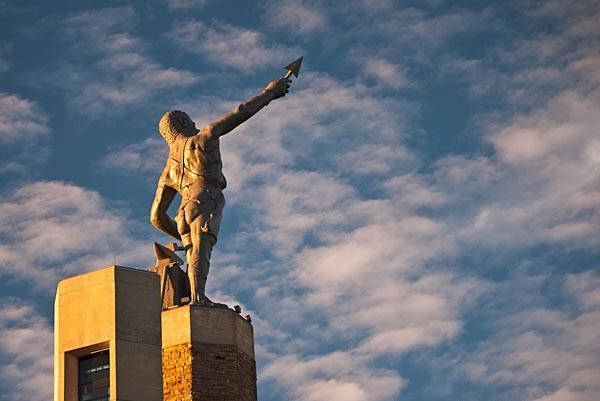 Following the fair, the 51-ton statue was abandoned alongside railroad tracks due to lack of city funds and no agreed plans. He was eventually moved to the fairgrounds for storage. Though Vulcan’s time at the fairgrounds was intended to be temporary; he spent thirty years there, advertising soda and pickles. Source: Eye Flare 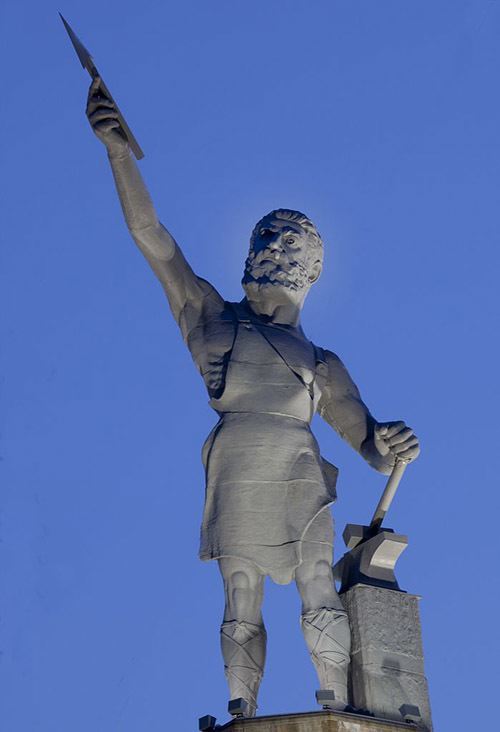 Vulcan was freed from servitude and brought back into the city after people fought to return his dignity. His park would take years to complete due to the Depression, but he would find his permanent home in 1939 on top of Red Mountain, overlooking the city. Source: CDN 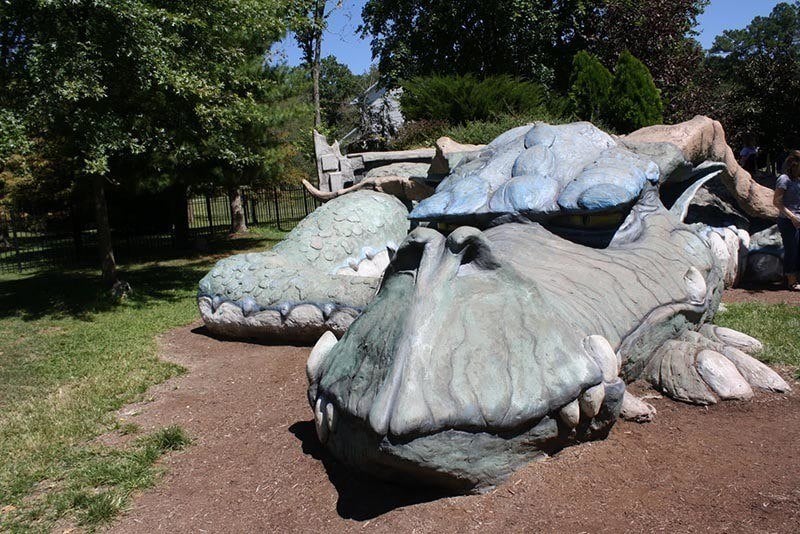 When we think of the suburbs, strip malls—not snoozing dragons—tend to come to mind. This is not the case for the Dungeons and Dragons Park in a Carbondale, Illinois suburb. Here, wizards fight epic battles, dragons take naps and goblins lurk in Jeremy “Boo” Rochman Memorial Park. Source: Blogspot 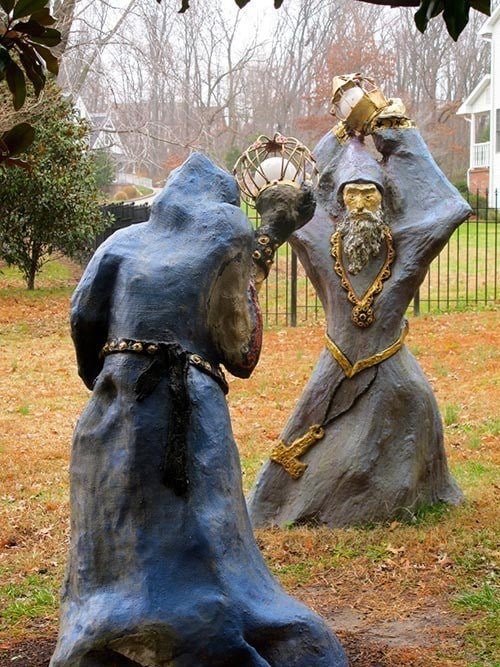 Rochman, for whom the park is named, died in a car accident in 1993 at only 19-years old. Afterwards, his father bought the land and established a memorial park themed around his son’s favorite game, Dungeons and Dragons. Source: Blogspot 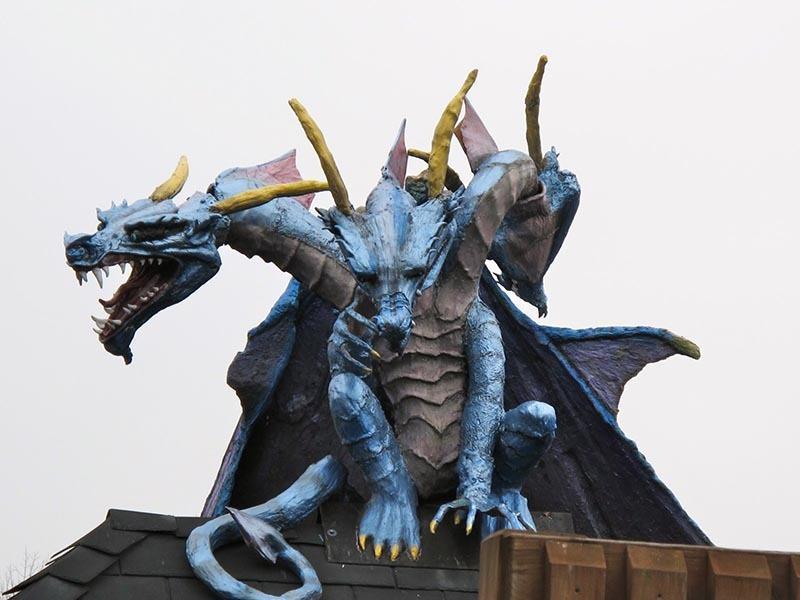 The park’s jungle gym castle is designed with secret doors, hidden passageways and bridges. People are invited to explore, but no adult LARP’ing is allowed. Source: Blogspot