Puppies Found In Ancient Chinese Tombs Were Used As Cheap Sacrifices, In Lieu Of Humans

"If it's not your puppy and if you're living in a society where you don't have the same assumptions of dogs and cuteness...it's a cheaper investment." 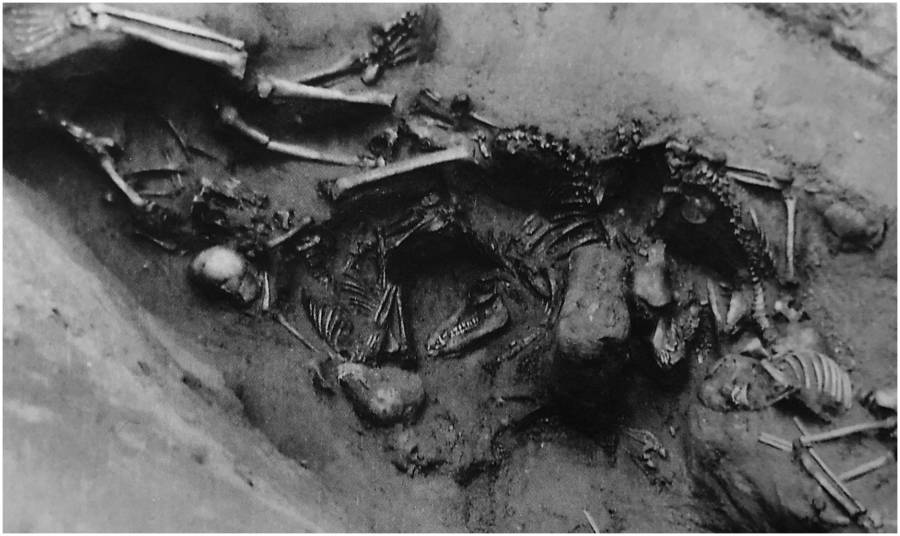 Long ago, human and animal sacrifices were a predominant ritual in many cultures. Now, according to Live Science, researchers have found that puppies as young as six months old were sacrificed and buried — sometimes alive — in human tombs during China’s ancient Shang Dynasty.

The Shang Dynasty ruled China sometime between 1766 and 1046 B.C. The society practiced both animal and human sacrifice, and the remains of these sacrifices were then usually laid in the tombs of the dead.

Pigs and dogs were among the animals that were usually used for religious sacrifice. Over time, perhaps because of increasing trade between China and western Eurasia, livestock like sheep, goats, and cattle become more popular.

Archaeologists Roderick Campbell and Zhipeng Li scoured old archeological data from past excavations in China and discovered that most of the dogs that had been sacrificed and buried were just pups at the time of their deaths. The discovery dispels the previously held belief that the sacrificed dogs were beloved pets that had been buried with their owners.

Furthermore, the young age of the canine victims suggests that dogs may have even been bred specifically for sacrificial use.

“Why would you sacrifice a cute little puppy?” muses Campbell, an archaeologist at New York University’s Institute for the Study of the Ancient World.

“On the other hand, if it’s not your puppy and if you’re living in a society where you don’t have the same assumptions of dogs and cuteness … it’s a cheaper investment in the animal. You don’t have to raise it yourself.”

The study, which was published in the journal Archaeological Research in Asia, conducted an analysis of the animal bones found in human tombs. They found that 73 percent of the buried puppies were less than a year old when they died, while 37 percent were not even 6 months old. Only 8 percent had an adult-like skeleton. If the dogs were pets, Campbell notes, they would have been of all ages.

The archaeologists examined about 2,000 gravesites in Xiaomintun, under the modern city of Anyang. About one-third of the sites contained the remains of dogs. The findings raise some potential theories how and why the Shang Dynasty sacrificed animals. 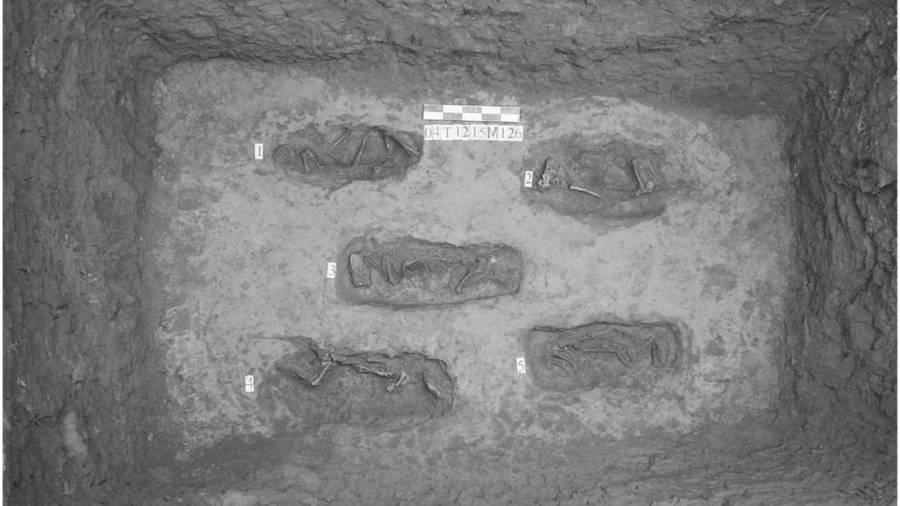 Dog burials have a long history in China; the earliest dog burial site is 9,000 years old, at the Neolithic settlement of Jiahu, in northern China. Canine bones started showing up in human tombs in China during the Erligang culture, in an area that includes the Jiahu site, sometime around 1500 B.C.

In one particular noteworthy excavation happened nearby the ancient city of Zhengzhou where archaeologists uncovered eight pits containing the remains of 92 dogs. The dogs had been bound and some of them showed signs that they had been buried alive.

The dogs that were found in the human tombs were often buried just below the torso of the deceased which led researchers to believe that it symbolized the close connection between the dog and the buried human. But this new evidence points to a more practical reason behind the burial of these canine companions.

The of the Shang Dynasty were known to sacrifice humans, too — usually concubines, slaves, or prisoners of war. Examination of sacrificed human remains show markings of individuals who suffered prolonged bouts of severe injuries, which suggests they had been tortured before their death.

These human sacrifices were then buried with the dead bodies of the society’s most rich and powerful deceased as an offering to the gods, most commonly to the sky or earth gods.

But if you weren’t rich enough to own a slave, offering up a stray puppy may have been a cheaper offering alternative. Since spaying and neutering weren’t common practice during those times, an abundance of puppy litters could very well have made puppies a cheap and accessible sacrifice.

In other words, buried pups may have been stand-ins for human sacrifices.

According to Campbell, his team’s findings underscore the importance of expanding the typical scope of archaeological study, beyond emperors and elites.

“We’ve been focused on palaces and kings for pretty much 100 years in Shang studies,” Campbell argued. “I think that’s given us a really warped perspective on that society.”

Next, discover 44 stunning photos from China’s Qing Dynasty. And then, learn to separate fact from fiction about human sacrifice in pre-Columbian America.