Andrea Yates, The Texas Woman Who Drowned Her Kids To Save Them From The Devil

Despite drowning her five children in the bathtub in 2001 after suffering a psychotic break, Andrea Yates now lives at a low-security psychiatric facility, where she is free to leave anytime. 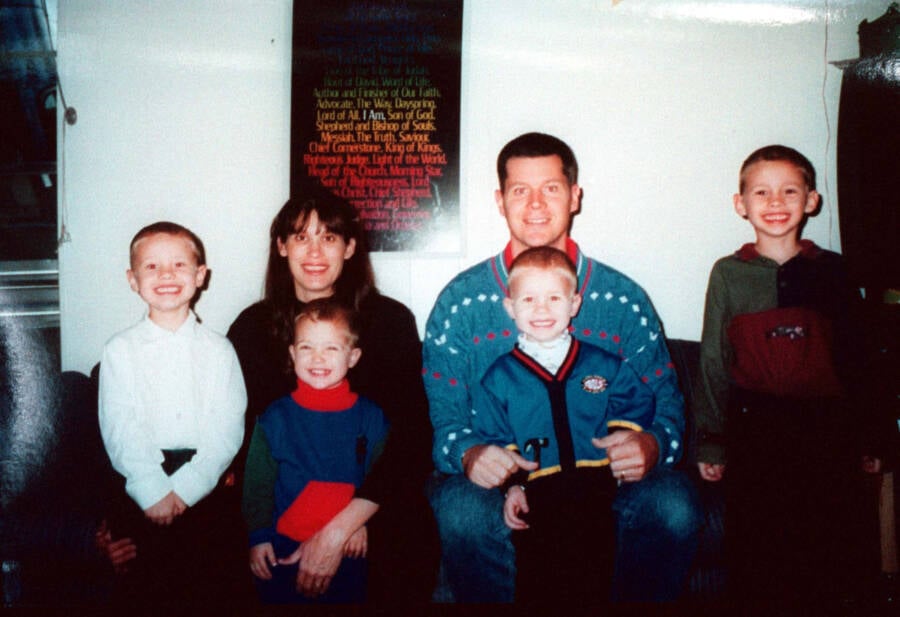 Yates Family/Getty ImagesRussell and Andrea Yates with four of their five children (left to right): John, Luke, Paul and Noah.

On the morning of June 20, 2001, Andrea Yates drowned her five children in the family’s bathtub. Then, she called 911 and waited for the police to arrive. But her crime — and the court proceedings that would follow — spurred a reckoning with women’s mental health issues and the justice system in the United States.

Before Andrea Yates became the woman who drowned her kids, she had struggled with mental health problems all her life. As a teenager, she suffered from bulimia and suicidal ideations. And as an adult, she would be diagnosed with depression, delusional thinking, and schizophrenia.

Still, she lived a relatively stable, simple, and devoutly religious life with her husband, Russell, and their family in a Houston suburb. But by 2001, Andrea Yates was convinced that she and her children were destined for hell.

Andrea, her psychosis fueled by the biblical teachings of a family friend, came to believe the only way to save her children and prevent Satan from returning to Earth was by killing them — and being executed for the crime.

Who Is Andrea Yates? 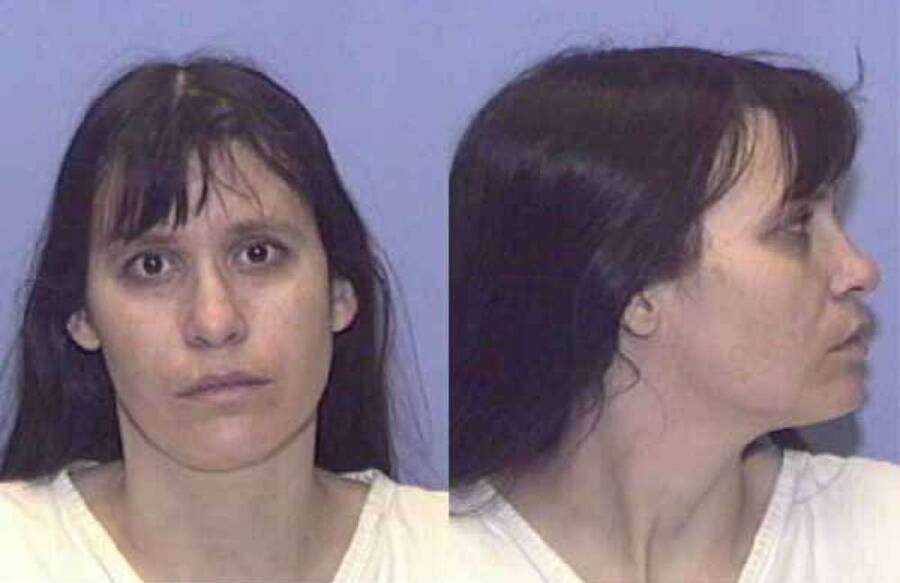 Texas Department of Criminal JusticeAndrea Yates, the Texas woman who drowned her kids.

Born Andrea Pia Kennedy on July 2, 1964, in Houston, Texas, Andrea thrived at Milby High School. She was valedictorian, a member of the National Honor Society, and the swim team captain. However, she also had an eating disorder and considered suicide.

Andrea Yates forged ahead and graduated from the University of Texas School of Nursing in 1986. She met Russell Yates while working as a registered nurse in 1989. Both 25 years old and religious, they moved in together shortly after — and married on April 17, 1993.

The couple vowed to have “as many children as nature would allow.” Over the next seven years, they had four boys and one girl, each named after a biblical figure: Noah, born in 1994, followed by John, Paul, Luke, and Mary, who was born in 2000.

But with every birth seemed to come another, more severe, bout of postpartum depression. And by the time Mary was born, however, Andrea Yates had already become dangerously influenced by the religious teachings of Michael Woroniecki. 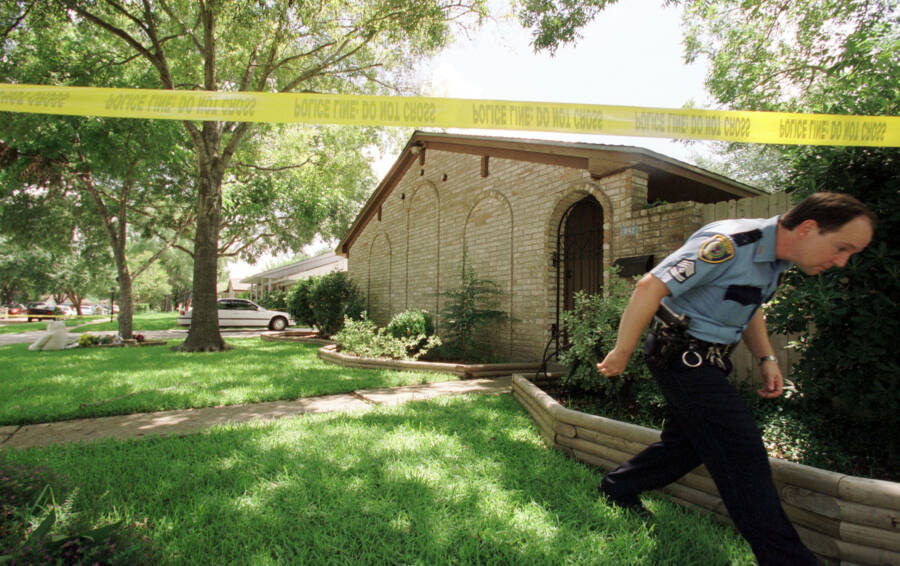 Russell Yates had met Woroniecki in college. Woroniecki was an unaffiliated cleric who preached a zealous form of righteousness that could only come from the immediate family living austerely.

By 1997, the Yates family lived in close quarters in a camper van purchased from Woroniecki, and Andrea began homeschooling her children in the 38-foot mobile home. But she was also suffering increasingly severe bouts of postpartum depression. In 1999, with the birth of Luke, she was prescribed Trazodone for treatment.

Then, on June 17 of that year, Andrea intentionally overdosed on the antidepressant, leaving her in a coma for 10 days. And on July 20, after she was released from the hospital, Russell found her holding a knife to her throat, pleading to die.

Andrea was convinced, as she had heard Woroniecki preach, that women derived from sin and that hell-bound mothers would see their children burn in hell.

“It was the seventh deadly sin,” said Andrea Yates from prison. “My children weren’t righteous. They stumbled because I was evil. The way I was raising them, they could never be saved. They were doomed to perish in the fires of hell.”

“It’s a delusion she probably wouldn’t have had had she not met the Woronieckis,” Russell said. “But certainly they didn’t cause the delusion. The illness caused the delusion.”

Under subsequent observation, Dr. Eileen Starbranch said she found Yates “among the five sickest patients” she ever had, and she prescribed the antipsychotic Haldol, which appeared to improve Yeats’s condition. Andrea seemed to improve. She was exercising again and resumed a stable homeschooling schedule.

The Woman Who Drowned Her Kids 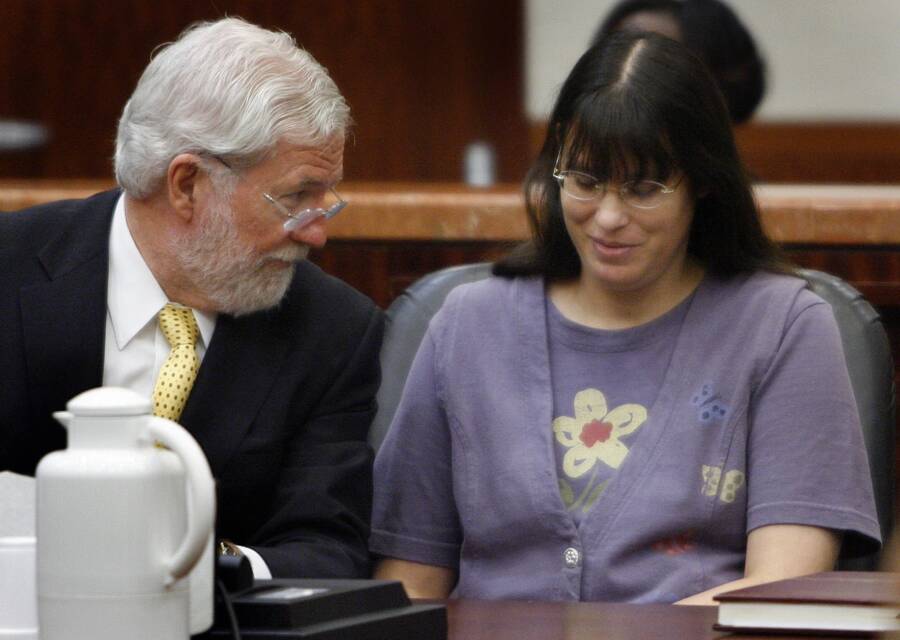 Brett Coomer-Pool/Getty ImagesAndrea Yates and her attorney George Parnham during her July 2006 retrial.

Because of her depression, psychiatrists urged Andrea Yates not to have any more children, but the family disregarded that advice. Andrea gave birth to Mary on Nov. 30, 2000. By that point, the family had bought a modest house in Clear Lake, Texas.

In March 2001, Andrea turned to scripture following her father’s death, but she also began engaging in self-mutilation and refused to feed her daughter.

She was hospitalized several times during this period, but the stays only resulted in unenforceable recommendations for psychological evaluation. And on June 3, 2001, Yates stopped taking Haldol.

Less than three weeks later, on the morning of June 20, 2001, Russell Yates left for work around 8:30 a.m. He had plans for his mother to take over parenting duties from Andrea an hour later. Tragically, it had already been too late.

After saying goodbye to Russell, Andrea Yates prepared cereal for her four eldest boys. Then, she took six-month-old Mary to the bathtub, which she had filled with nine inches of cold water, and drowned her, leaving her body floating in the tub.

Then, she returned to the kitchen and, beginning with the next-youngest, systematically killed the rest with Mary still visible, in order of age, and laid their bodies on the bed. Noah, the eldest, tried to run when he saw his lifeless sister, but Andrea caught him too.

After leaving Noah in the tub and placing Mary on the bed, Yates called the police. Then she called Russell and told him to come home.

Where Is Andrea Yates Now? 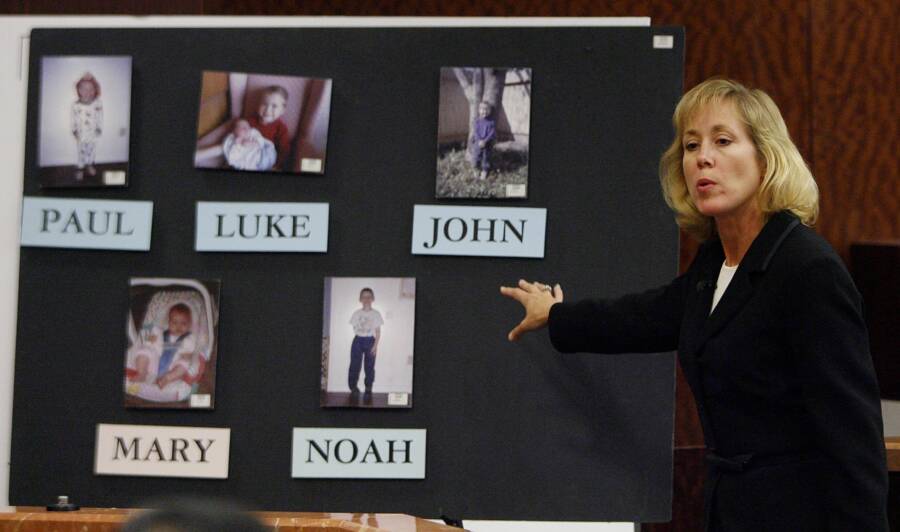 After police arrested Andrea Yates, she told psychiatrist Dr. Phillip Resnick that her children “would not grow up to be righteous.” She believed killing them before they turned sinful had saved them from hell — and that only her own execution for killing them would defeat Satan on Earth.

Andrea Yates immediately confessed that she was the woman who drowned her kids, and she even explained that she waited for her husband to leave before committing them. She had even locked the family dog in the kennel that morning to keep him from interfering. George Parnham, a lawyer hired by a family friend, took up her defense.

The three-week trial in 2002 saw Yates’ attorneys mount an insanity defense to save her from execution. Under Texas law, however, this required the subject to prove they were incapable of telling right from wrong — with her failure to do so resulting in a guilty verdict of capital murder.

At the time, Russell Yates remained true to his faith: “The Bible says the devil prowls around looking for someone to devour,” he said. “I look at Andrea, and I think that Andrea was weak… and he attacked her.” 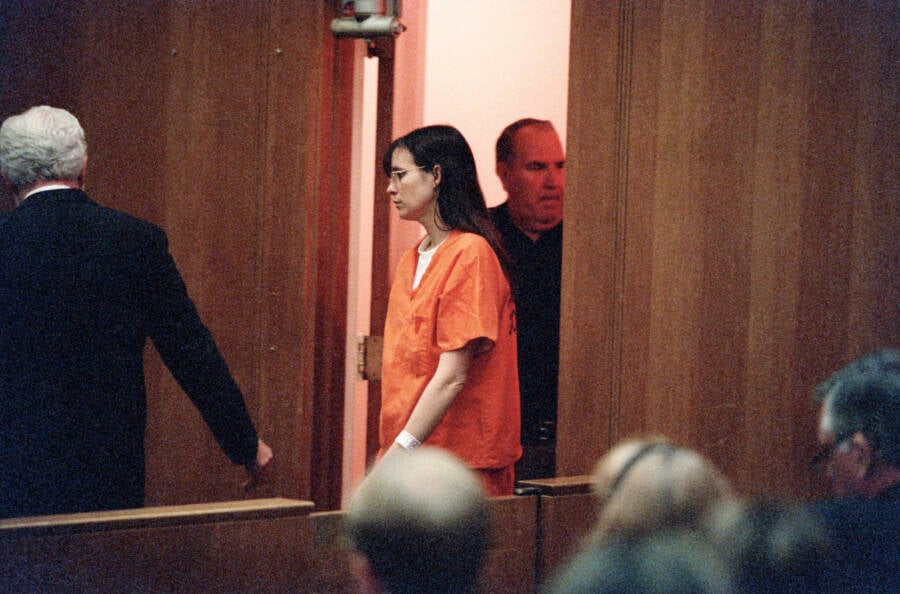 While prosecutor Kaylynn Williford sought the death penalty, jurors were unconvinced that Yates met that criterion. They sentenced the woman who drowned her kids to life in prison with parole eligibility in 2041.

In 2005, however, an appeals court discovered that false testimony by an expert for the prosecution had tainted the 2002 trial.

Jurors had been told that Yates had likely seen an episode of “Law & Order” in which a mother who drowned her children was found not guilty by claiming insanity, but no such episode existed.

As a result, Yates earned a new trial where she was declared not guilty by reason of insanity. She was sentenced to remediation in the Kernville State Hospital, a low-security mental health facility in Texas, which one of her lawyers described as a “watershed event in the treatment of mental illness.”

To this day, her release comes up for review every year, and each year, Andrea Yates waives that right. Texas law dictates that the court has jurisdiction for as long as her prison sentence would have been. In Andrea’s case, that is the rest of her life.

After learning about Andrea Yates, read about Betty Broderick, who shot her ex-husband and his new wife in their bed. Then, learn about Louise Turpin, who kept her 13 children in a “house of horrors” for decades.