Ann Marie Burr, The Missing Eight-Year-Old Who May Have Been Ted Bundy’s First Victim

Ann Marie Burr disappeared from her bedroom one night in 1961 — while living in the same Tacoma, Washington neighborhood as 14-year-old Ted Bundy. 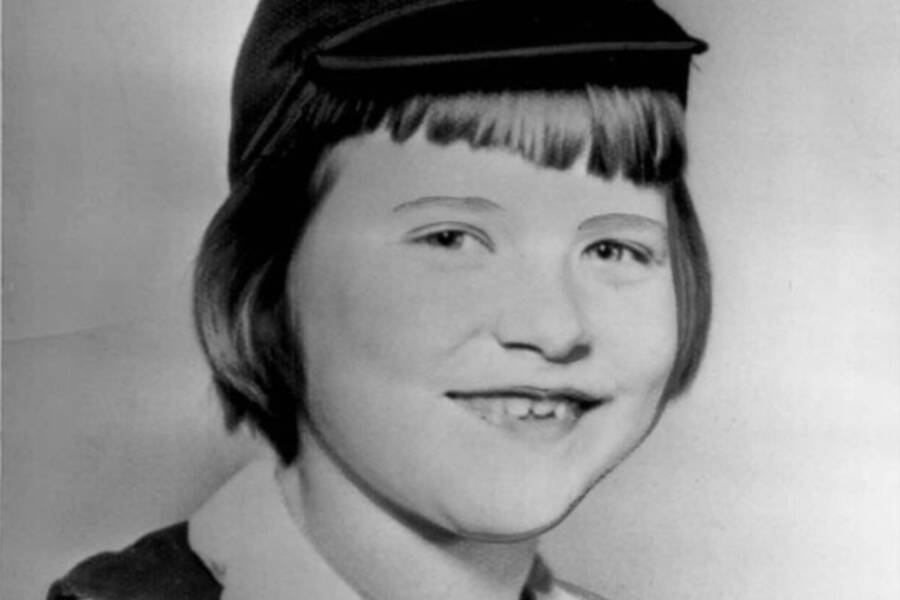 Charley ProjectAnn Marie Burr was eight years old when she vanished in 1961.

During a violent summer storm in August 1961, eight-year-old Ann Marie Burr vanished from her family’s Tacoma, Washington home. In the decades since, a disturbing theory about her disappearance has risen to the surface. Some believe that Ann was abducted and murdered by a 14-year-old who lived in the same neighborhood: Ted Bundy.

Bundy, of course, grew up to become one of the most notorious serial killers in American history. By the time he was executed in 1989, he’d readily admitted to killing 30 women between 1974 and 1978, and hinted that he was responsible for more murders. But did Bundy kill Ann?

Though the serial killer outright denied it when asked by the Burr family, he also implied during interviews with investigators and academics that he had once kidnapped a young girl from her home, assaulted her in a nearby orchard, and disposed of her body in a ditch.

This is the story of Ann Marie Burr’s life and disappearance, and the theories of what may have happened to her in August 1961.

Who Was Ann Marie Burr?

Born on Dec. 14, 1952, Ann Marie Burr grew up with her parents, Beverly and Don, and her three younger siblings, Julie, Greg, and Marie, in Tacoma, Washington. Ann and her siblings had friends in the neighborhood, and Beverly taught the children that the world was a good and safe place. 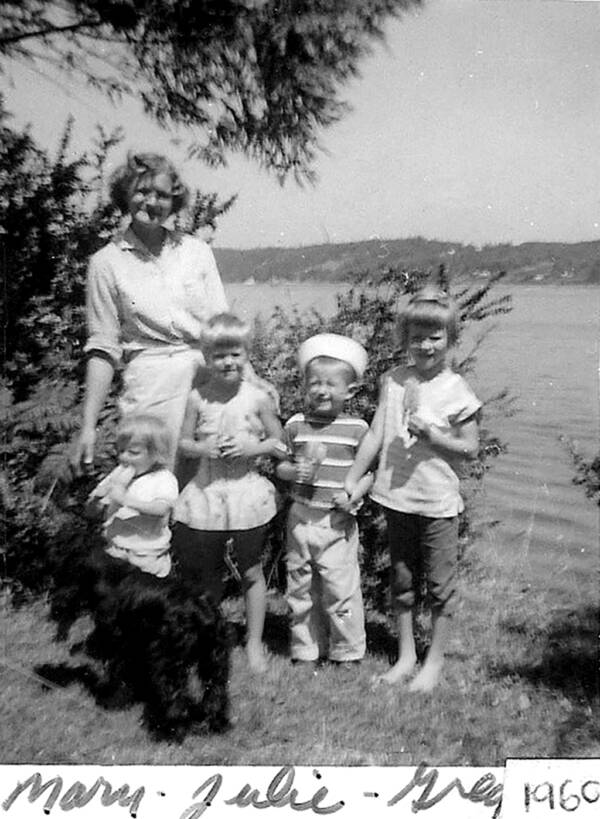 Beverly BurrAnn Marie Burr, far right, with her mother and siblings in 1960, the year before she disappeared.

“Ann was so trusting,” Beverly later told the Seattle Times, noting she regretted not warning Ann about the world’s evils. “It was a big mistake. We taught her everyone was good. We didn’t teach them that people could be bad. I still think [her abductor] was probably someone she knew.”

As the summer of 1961 waned, Beverly started preparing her four children for the new school year. Ann was about to start third grade at Grant Elementary School, so when she asked her mother if she could spend the night of Aug. 30 at a friend’s, Beverly said no. According to History Link, she wanted the children to start preparing for the end of summer and the start of school.

That night, Beverly and Don locked up their house on the 3000 block of North 14th Street around 11 p.m. Don put their cocker spaniel, Barney, out on the landing by the kitchen, and Beverly made sure that the front door was securely locked.

Then, as a summer storm raged outside, Don and Beverly went to sleep. They didn’t know it, but it was the last night they’d ever see their oldest daughter.

Inside Tacoma’s Most Enduring Mystery

Beverly saw her daughter just one more time before Ann Marie Burr disappeared. During the night, Ann brought her younger sister, Mary, to their parents’ room because Mary had a cast that was bothering her. Beverly spoke to them both, then sent them to bed.

Around 5 a.m., Beverly awoke with a bad feeling. She checked on the children and found that Ann was not in her bed. While the rest of the family slept, Beverly discovered that a window in the living room, usually kept open a crack for a TV antenna wire, was fully open.

More alarmingly, Beverly found that someone had placed a garden bench beneath the window. And the front door, locked during the night, was ajar.

Beverly roused her husband, and the search for Ann Marie Burr began. 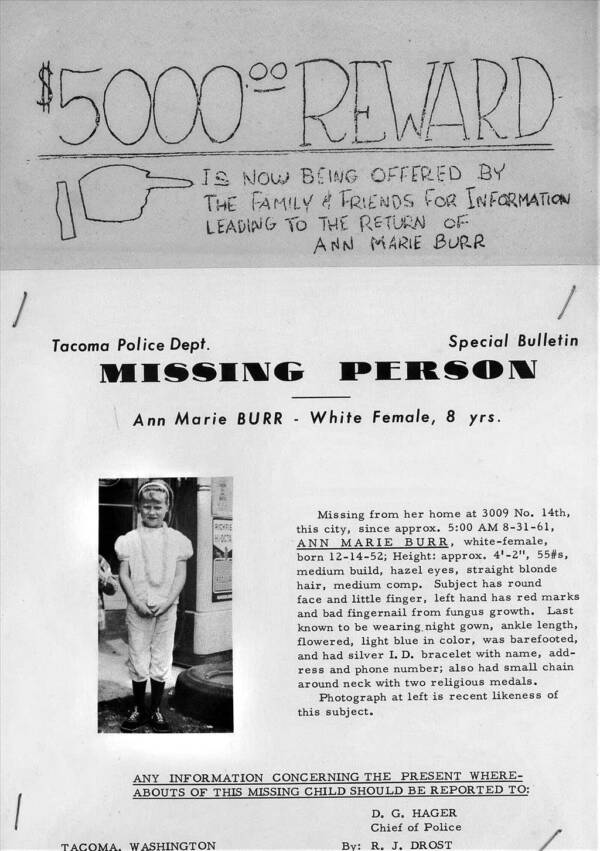 Tips quickly poured in. History Link reports that three neighbors claimed they’d seen someone peering in the Burrs’ windows, and Don and Beverly recalled hearing strange noises in their yard during the night that summer.

What’s more, police investigating the scene documented a smallish footprint about the size of a teenage boy’s on the overturned bench found beneath the window outside, and collected red thread from the sill.

But despite questioning thousands of people and launching the largest manhunt in Tacoma’s history, Ann Marie Burr was nowhere to be found.

She added: “When they were searching, I thought, ‘What’s the point?’ I knew she was gone, and we would never see her again.”

Indeed, by the time Beverly died in 2008, five years after her husband, the investigation into Ann Marie Burr’s disappearance remained as cold as ever. But multiple theories about Ann have emerged. And one of the most disturbing is that she was killed by her teenage neighbor, Ted Bundy.

As time passed after Ann Marie Burr’s disappearance, the police weighed multiple suspects. According to the Seattle Times, there was another teenage boy living nearby who flunked, then passed, a polygraph test. There was the Oklahoma inmate who claimed he’d buried Ann. And there was a 14-year-old named Ted Bundy, who grew up to be a serial killer. 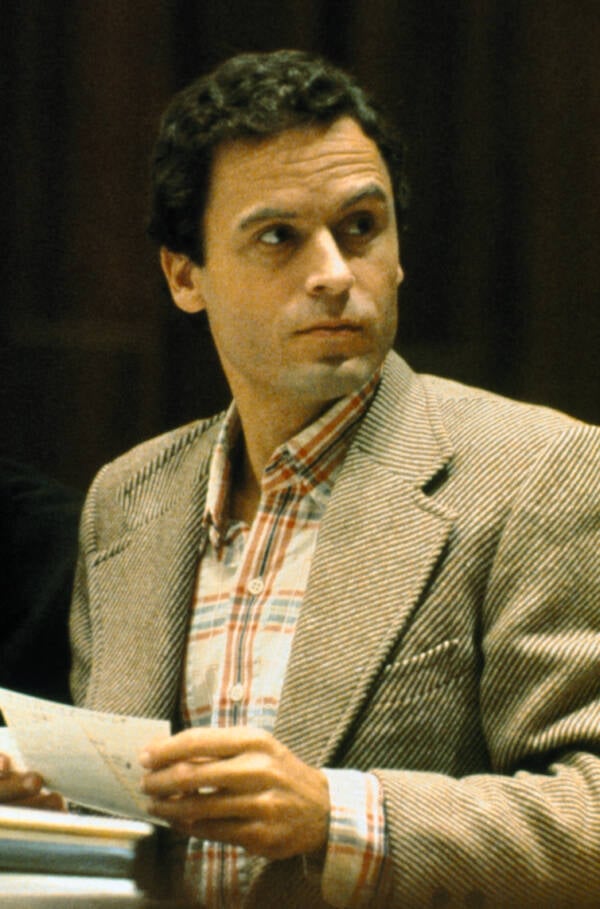 By the time Ann vanished, Bundy lived two miles away from the Burr family. Q13 Fox reports that Ann and Bundy knew each other and that Ann often trailed after the older boy when he delivered newspapers.

After his arrest in 1978, History Link reports that Beverly and Don Burr learned that Bundy had told investigators a chilling story about killing a young girl in an orchard. When Ann disappeared, the family had lived next door to an orchard full of apple trees and raspberry bushes.

So, Beverly reached out. In a 1986 letter, she wrote Bundy directly and told him that she suspected him of killing Ann. “You have nothing more to lose in this world,” Beverly wrote. “[W]ill you write to me regarding Ann Marie?”

Bundy swiftly responded and outright denied killing Ann Marie Burr. “First and foremost, I do not know what happened to your daughter Ann Marie,” Bundy wrote. “I had nothing to do with her disappearance.”

But as History Link notes, Bundy often told a different story. Dr. Ronald Holmes, of the University of Louisville’s School of Justice Administration, claimed that Bundy had admitted that he’d “stalked, strangled, and sexually mauled his first victim, an eight-year-old girl.”

Bundy also said he’d buried her in a muddy pit near the University of Puget Sound, where Don Burr happened to have seen a suspicious young man, who he says smirked while he searched for his daughter. Don urged the police to search the site, but the ditches were soon filled in as part of the university’s construction.

Though the Burr family hoped that the serial killer might make a last-minute confession, Ted Bundy was executed on Jan. 24, 1989 without saying anything more about Ann Marie Burr.

Since then, her family has been left to wonder if Ann was Bundy’s very first victim. In 2011, some of Bundy’s blood was even tested against tiny amounts of DNA found at the Burr family home, but the Huffington Post reports that the results were inconclusive.

To date, Ann Marie Burr’s case remains unsolved. Did Bundy kill her? Or was it someone else? Sadly, the world may never know what happened to the eight-year-old girl who disappeared in the middle of the night.

After reading about Ann Marie Burr, discover the tragic stories of Ted Bundy’s known victims. Or, see how Ted Bundy used his infamous Volkswagen to help him commit his crimes.