Inside The True Story Of Rob Roy MacGregor, The Legendary ‘Scottish Robin Hood’

Famously portrayed by Liam Neeson in a 1995 film, Rob Roy MacGregor was painted as a hero, but in reality, the 18th-century outlaw was a more complicated figure.

The Victorian author Sir Walter Scott captivated his readers with tales of a debonair, gallant rogue by the name of Rob Roy — an outlaw likened by many to the famous Robin Hood, a man of the people who stole from the rich to give to the poor.

Unlike Robin Hood, however, whose name had been attached to multiple people throughout history, the fictional character of Rob Roy was based on a real individual who was most certainly an outlaw, though perhaps not quite as chivalrous as in Scott’s works.

The real Rob Roy MacGregor was a freebooter who frequently engaged in cattle stealing and blackmail, even running a protection racket in which he would charge farmers five percent of their annual earnings to stop men like himself from stealing their cattle — certainly a far cry from the sort of noble thievery with which he came to be associated.

Regardless, Rob Roy MacGregor’s notoriety undoubtedly solidified him as one of the most legendary folk heroes in Scottish history — and made him the namesake of an 80-mile walking trail and a famous cocktail.

So, which parts of Rob Roy’s history are fact, and which are fiction?

The History Of Clan MacGregor — And The Banning Of Their Name

Much of Scotland’s history revolves around the great clans: groups of people who were not quite families but allied themselves with a powerful house and clan chief, adopting their surname and swearing fealty in exchange for protection and kinship.

Among these powerful clans was Clan MacGregor (or Clan Gregor, if you prefer), whose lineage, according to Scotland Magazine, traces back to Grigor, the son (or brother) of Kenneth MacAlpin, the first King of the Scots — hence the family’s motto: “Royal is my race.” 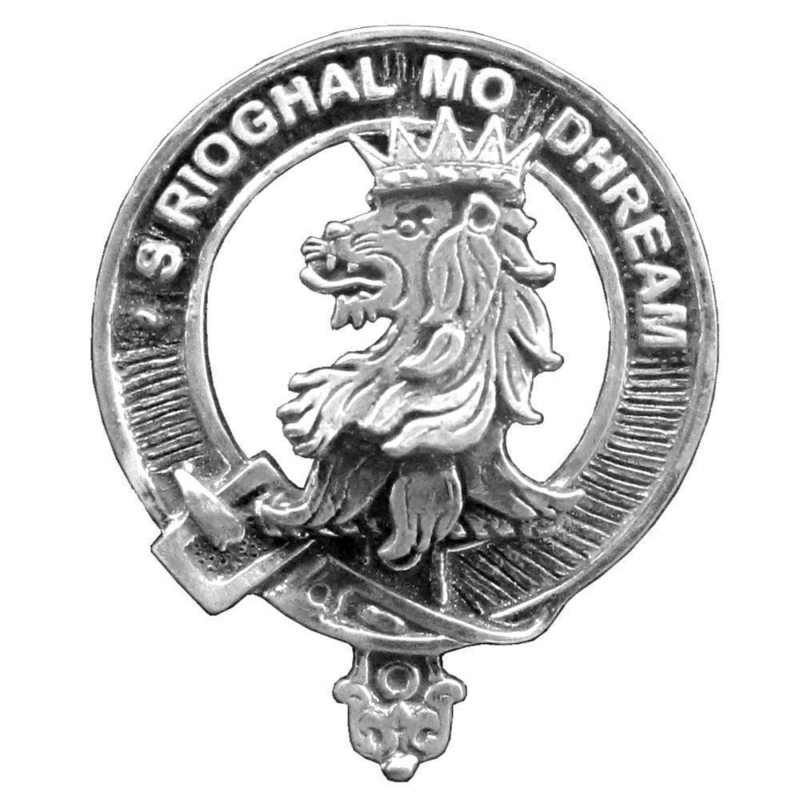 TwitterThe insignia of Clan Gregor, with the motto ‘S Rioghal mo dhream, “royal is my race.”

Clan MacGregor once controlled land in the regions of Glenorchy, Glenlochy, and Glenstrae in Argyll and Perthshire, but come the 14th century, as the Campbells rose to prominence, Robert the Bruce stripped the MacGregors of a significant portion of their lands around Loch Awe — and gave them to the Campbells, leaving the MacGregors in control only of Glenstrae.

Naturally, this made the MacGregors and the Campbells sworn enemies, and the MacGregor clan frequently raided Campbell cattle.

As a result, many members of Clan MacGregor were forced to take other names, or resort to living a life outside the law. In addition to their persecution, MacGregors were not allowed to gather in groups of more than four, nor were they allowed to carry arms.

Those who did not find a new clan often turned to thieving as a means of getting by.

Although the rules against the MacGregors loosened a bit as the century went on, the prejudice remained; MacGregor was a tarnished name, which is why despite being born in 1671, Rob Roy regularly used his mother’s maiden name: Campbell.

Before He Was An Outlaw, MacGregor Was A Simple Cattle Herder

At the time of Rob Roy MacGregor’s birth in March 1671, the persecution of the MacGregor clan had largely died down. His parents were Donald Glas, a MacGregor chieftain, and Mary Campbell, who affectionately referred to their son as Ruadh (later anglicized to Roy), the Gaelic word for red, due to his reddish hair.

The MacGregors were Jacobites loyal to the recently deposed King James II, with both Rob Roy and his father fighting in the Battle of Killiecrankie in July 1689 during the uprising against King William III. 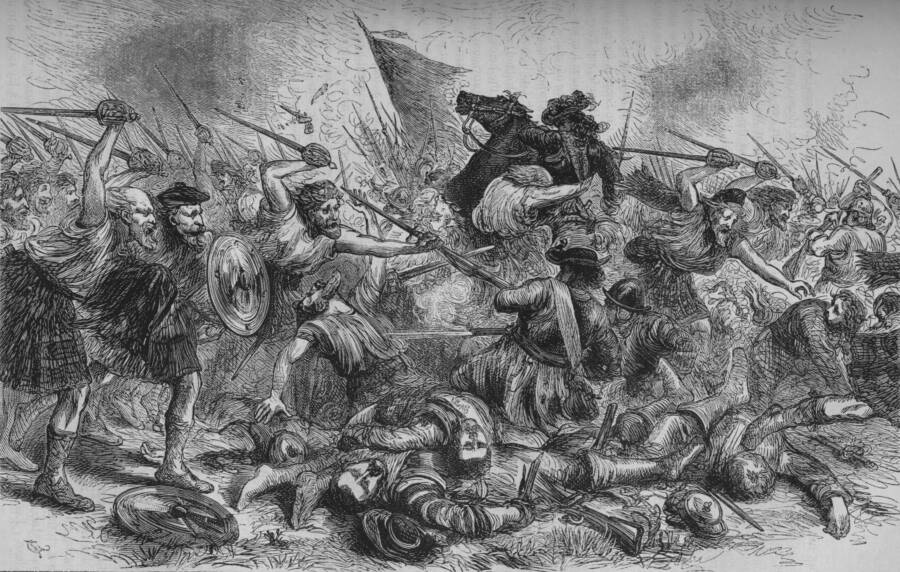 The MacGregor clan’s role in the Jacobite uprising was not well tolerated, however, and following the rebellion, in 1693, their name was once again banned, prompting Rob Roy to start using his mother’s surname.

Rob Roy, at this point, shied away from the realm of politics, instead marrying his cousin Mary Campbell of Comar and starting his own cattle trading business under the patronage of the Duke of Montrose.

And for a time, MacGregor’s life was peaceful and successful. He earned the land and title of Laird of Inversnaid, and the location of his land between the rival clans Argyll and Montrose proved fruitful.

However, this blissful period did not last long. In 1711, after borrowing £1,000 from the Duke of Montrose, Roy was betrayed by one of his own — his chief drover stole the money and fled. Roy assured Montrose that he would catch the thief and repay the money, but the damage was done.

Montrose denounced Roy as a thief, bankrupting the cattle farmer and repossessing his lands. Some versions of the story allege that the soldiers who arrived at MacGregor’s house to evict him subsequently raped and branded his wife.

Rob Roy blamed the Duke of Montrose for his misfortune, and left with no choice but to turn to the life of an outlaw, he became a consistent thorn in the Duke’s side.

Rob Roy, The Outlaw And Friend Of The People

MacGregor pursued an aggressive vendetta against the Duke of Montrose, rustling cattle on Montrose’s lands, thieving, and robbing those loyal to the Duke — including once kidnapping Montrose’s representative who was transporting £3,000 of rent money.

Eventually, according to Undiscovered Scotland, MacGregor’s banditry turned to landowners, whom he would offer to “protect” for a fee. Those who didn’t pay, however, soon found themselves missing quite a number of belongings. 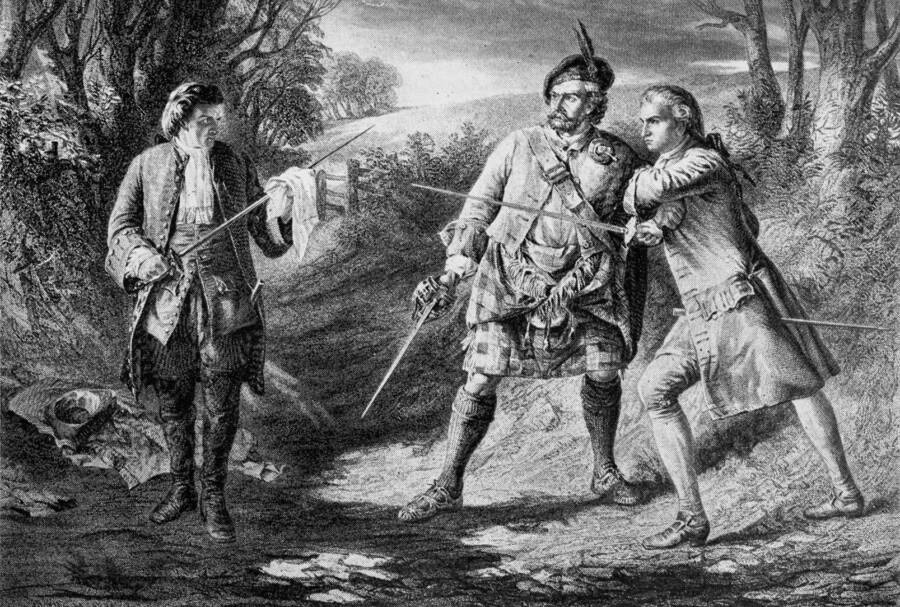 Yet many accounts say that MacGregor was kind to the common folk during this period, especially the poor who had similarly been mistreated by the Duke of Montrose, and it is likely that these accounts are part of the reason for his folk hero status.

Fortunately for MacGregor, his actions against the Duke of Montrose earned him an ally in Montrose’s rival, John Campbell, the Duke of Argyll.

Of course, this alliance was cut short in 1715 during the Jacobite uprising when Rob Roy was used to rally the MacGregor clan in Aberdeenshire and lead the Jacobite army from Perth towards Stirling.

Argyll, however, was not sympathetic to the Jacobites’ cause — and in fact sent a small army to stop the Jacobites as they tried to reach the Lowlands. Naturally, this put MacGregor in a conflicting situation, with his loyalties to the Jacobites and the Duke of Argyll being tested. During the battle, he did not fight for either side.

This did little to help his reputation, though, and soon after, a bounty was placed on Roy’s head for his role in the rebellion, in addition to his already-present charges of banditry. Luckily, Campbell remained an ally to MacGregor, and allowed the brigand to live near an Argyll base in Inveraray.

While living under Campbell’s protection, Rob Roy MacGregor continued his revenge-fueled crimes against the Duke of Montrose, during which he was captured multiple times, always managing to escape.

This went on until 1722, when Argyll and Montrose reconciled, ultimately leading to MacGregor’s arrest and confinement in Newgate Prison, London.

Then, in 1723, MacGregor’s fate changed once again when the English writer Daniel Defoe published Highland Rogue, an exaggerated and slightly fictitious biography of Rob Roy MacGregor — a book that was evidently popular enough to warrant a Royal Pardon for MacGregor by public acclaim in 1727, just as he was about to be sent to Barbados.

Following the pardon, Rob Roy spent the last seven years of his life living peacefully into old age. He died on December 28, 1734, at age 63. 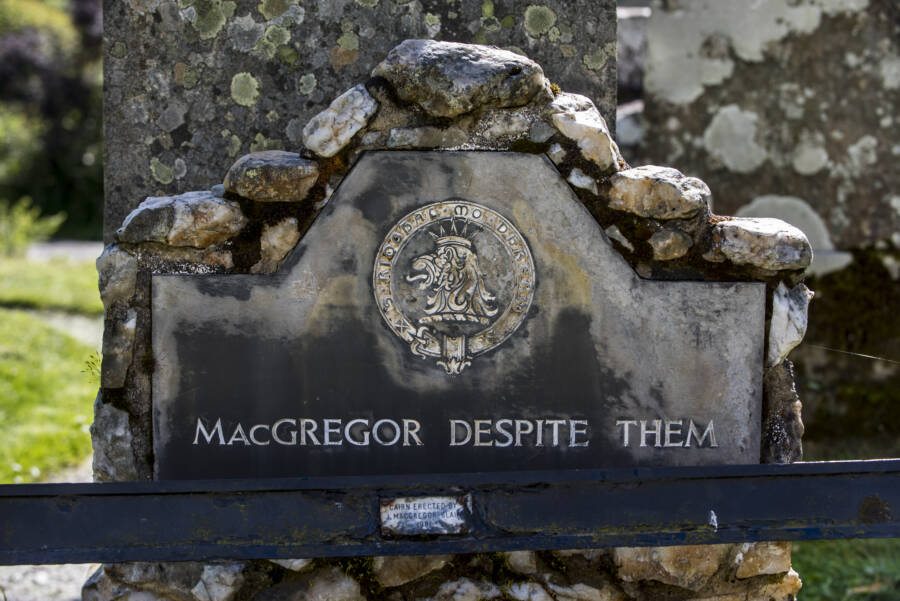 He was later used as a character in a series of popular novels by Sir Walter Scott in the early 19th century, and the subject of two Hollywood films in the 20th century. In 1981, a new gravestone was erected, proclaiming, “MacGregor Despite Them,” quoting lyrics written by Sir Walter Scott:

“While there’s leaves in the forest,
and foam on the river,
MacGregor, despite them,
shall flourish forever.

After exploring the story of this outlaw-turned-hero, read about another notorious Scotsman: Robert the Bruce. Then, learn about Gregor MacGregor, the Scottish con artist who convinced the British he was prince of a nonexistent colony.