Robert The Bruce: The Story Behind The Scottish Ruler Of ‘Braveheart’ And ‘Outlaw King’

In the early 14th century, Robert the Bruce became the King of Scots and ensured his country's independence after repulsing several English invasions.

Robert the Bruce’s place in history was sealed long before Chris Pine starred in the Outlaw King, but how well does Netflix portray the infamous Scot?

The story of the Scottish national hero is far messier — and bloodier — than has been portrayed.

Trouble With The Scottish Crown 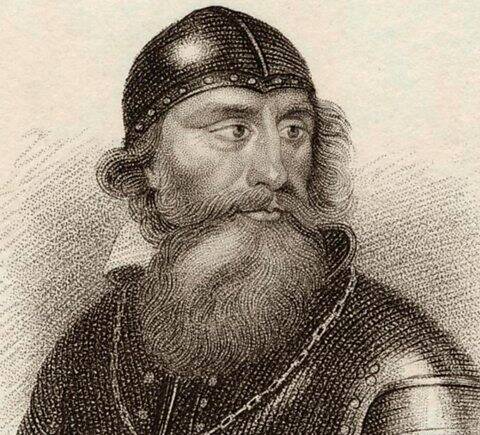 An 19th century engraving of King Robert the Bruce.

When King of Scotland Alexander III died without a male heir in 1286, he consequently left behind a power vacuum on the throne.

Various contenders, including within Scotland and abroad, fought to claim his empty crown. Two of the most powerful contenders were “Robert the Competitor,” who was the grandfather of Robert the Bruce, and John Balliol, who was endorsed by England.

The Bruces of Scotland were originally “de Bruses” of Normandy. Robert the Competitor made his claim to the throne of Scotland based on the fact that he was Alexander III’s closest living male relative by one generation.

As various Scots declared their support for one claimant or another, the country seemed on the brink of civil war until finally the Scottish “Guardians of the Realm,” a set of noblemen who had been appointed to keep order, asked King Edward I of England to intervene. 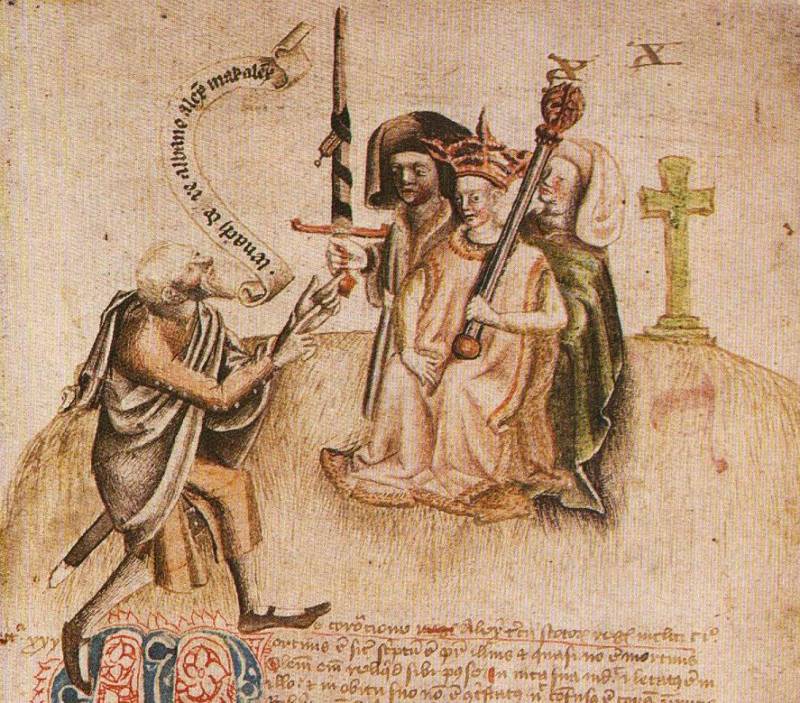 King Edward I, who was also dubbed “Longshanks” for his imposing height, was described as “a lion in pride and fierceness” but a “panther in fickleness and inconstancy.” He saw an irresistible opportunity to expand his own power upon the Scottish king’s death.

Edward shrewdly decided in favor of Balliol, who became little more than a vassal under the Longshank’s control.

The Rebellion Of The Bruces

Robert the Bruce VIII, born in 1274, grew up in the tempestuous climate following Alexander III’s death. He was constantly reminded that “in his veins ran the royal blood,” nor did he forget the great insult done to his family by the rejection of their claim to the throne.

Many other Scottish lords were less than thrilled that their king had turned out to be an English puppet. This frustration peaked in 1294 when Edward demanded Scottish military support for his war with France.

The Scots were outraged that they were being ordered to fight and die for a foreign king. In response, the Guardians of the Realm reconvened and sent their own envoys to France to negotiate a separate treaty of alliance.

This in turn so infuriated Edward that in 1296, he decided it was time to sweep aside Balliol and invade Scotland for himself. 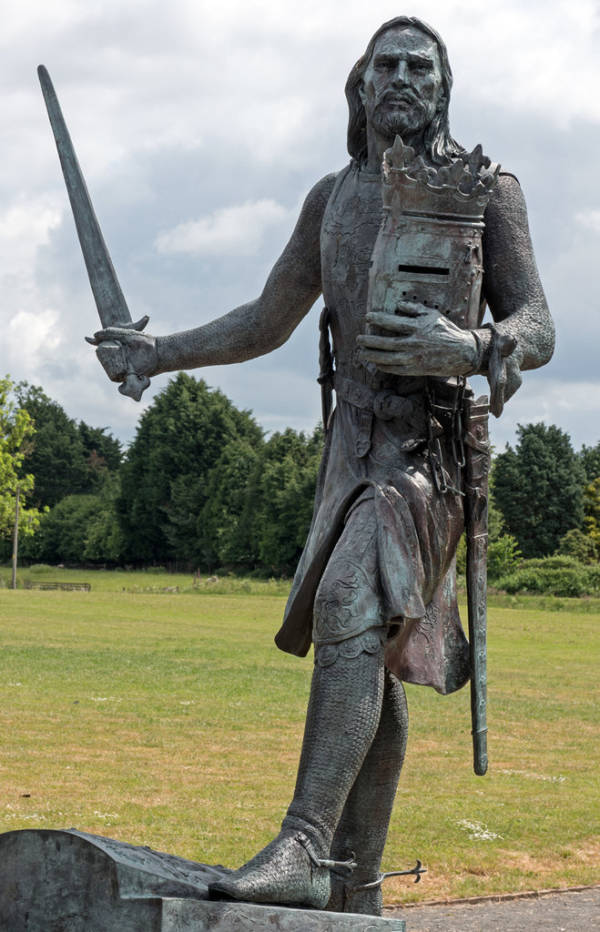 geograph.org.ukEdward I was dubbed “Longshanks” because he towered over other men, and he would soon become known as “The Hammer of the Scots.”

Edward and his armies tore through Scotland with such ferocity and swiftness that the English king was dubbed “the Hammer of the Scots.” He was determined not only to conquer the Scots but to utterly crush and humiliate them.

One account of his sack of Berwick describes how:

“When the town had been taken in this way and its citizens had submitted, Edward spared no one, whatever the age or sex, and for two days streams of blood flowed from the bodies of the slain, for in his tyrannous rage he ordered 7,500 souls of both sexes to be massacred…So that mills could be turned round by the flow of their blood.”

Edward’s viciousness did not entirely have the effect he intended. Rather than submit, in 1297 the enraged Scots rose up against the English under the leadership of William Wallace.

Although always an important cultural figure in his home country, Wallace’s place in popular history was cemented by Mel Gibson’s 1995 movie, Braveheart. The film was a smash hit and turned Wallace into a household name, but its story of the Wars of Scottish Independence, and particularly Robert the Bruce’s role in them, is not entirely accurate.

The Bruce family had actually initially supported Edward’s invasion, thinking that the dethroning of Balliol would at least clear their own path to the crown. When it became clear Longshanks intended to rule the country himself, then 21-year-old Robert the Bruce decided to throw his lot in with the rebels, seemingly against his father’s wishes.

In 1297, William Wallace dealt the superior British forces a stunning defeat at the Battle of Stirling Bridge. But this was followed by a defeat of his own at the Battle of Falkirk in 1298 and Wallace was then forced to flee. He was declared an outlaw.

The English and Scots continued to battle until 1304 when Robert the Bruce and the rest of the Scottish nobility finally submitted to Edward.

Robert The Bruce, The Outlaw King, Rises In Power

Braveheart portrays Robert the Bruce as a cowardly politician who betrayed Wallace to advance his own interests. While it can be reasonably concluded that Bruce always had his own claim to the throne at the forefront of his mind, he supported the rebellion as long as it was feasible, and he was far from the only nobleman to submit.

William Wallace was executed in 1305. Just when it seemed that any hope of an independent Scotland had been snuffed out, a new torch-bearer for the cause emerged.

Robert the Bruce had been appointed a joint guardian of the realm along with John “The Red” Comyn after Wallace was forced to resign. It is unknown how exactly the Bruce managed to regain Edward’s trust after his initial rebellion, but it is possible the Longshanks was attempting to cultivate allies among the Scottish nobility by granting a select few power.

What he did not realize was that Robert the Bruce had never given up on his right to the throne and was finally prepared to make his move.

The last obstacle that stood between Robert the Bruce and the Scottish crown was Comyn, who also had a claim to be king. In what was perhaps an attempt to overcome the infighting that had plagued the Scottish nobility for so long and hindered their chances at independence, Bruce and Comyn met at Greyfriars Kirk church in early 1306.

Whatever peaceful intent the meeting might have had, it ended in argument and bloodshed. Bruce stabbed Comyn in front of the altar and thereby eliminated his last obstacle to the throne.

This time it was Bruce who was branded an outlaw and forced to flee, but not before he was hastily crowned by Bishop Wishart in March of 1306.

It was hardly an auspicious start to his reign. With his brothers slaughtered, his sisters and wife imprisoned, and his supporters forced into hiding, things looked bleak for the man who was king in name only. It wasn’t until the “Outlaw King” began to make use of the guerrilla tactics that had brought Wallace his early successes that he began to garner any support from his countrymen.

His success against the British at the Battle of Loudoun Hill would further cement his legitimacy amongst the Scots.

As Robert the Bruce’s victories tallied up and the legend surrounding him grew (with tales of him being forced to hide in caves and mountains), so did his popularity.

Without any serious rivals, the Scottish people began to rally behind him as their last hope for liberation from England. Fate seemed to further favor Bruce when the Hammer of the Scots died en route to crushing this final rebellion. 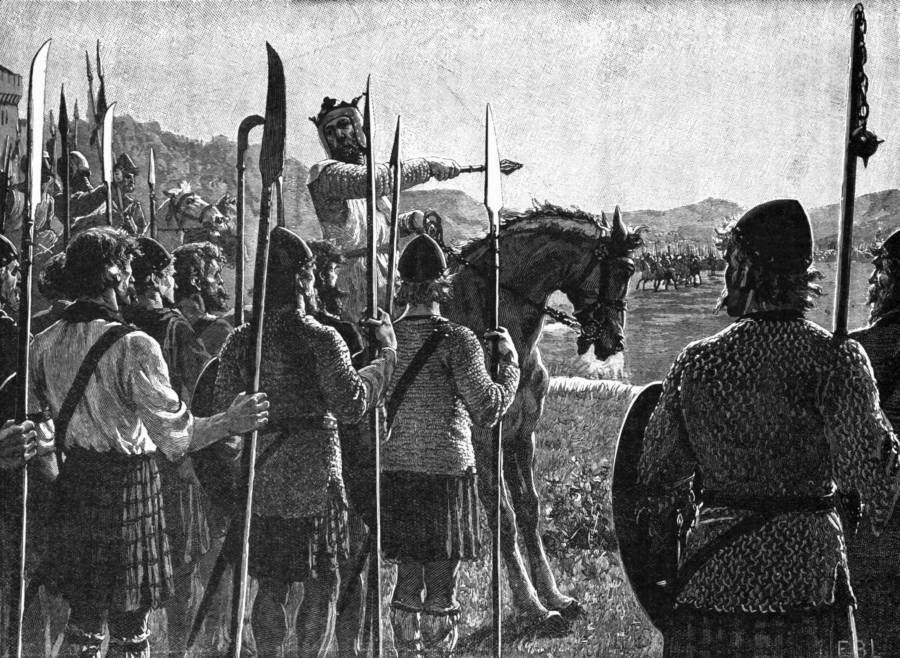 Wikimedia CommonsRobert the Bruce led the Scottish Army to victory and ultimately, independence from England.

His heir, Edward II, proved far less adept at warfare than his father and suffered a humiliating defeat during the Battle of Bannockburn in 1314 at the hands of Robert the Bruce and a finally-united Scottish force.

The Battle of Bannockburn proved to be a decisive victory for the Scots and marked the effective end of English control of their country.

However, England did not officially relinquish their claims on Scotland until 1328, when King Robert the Bruce took advantage of the country’s internal crisis and invaded northern England, forcing Edward III (who had recently replaced Edward II) in 1328 to declare Scotland an independent country with Robert the Bruce as its king.

A year later, the Scottish king was dead, having finally made good on his promise to seize the throne after three decades of fighting.

After learning about Robert the Bruce, the outlaw king of Scotland, check out the botched execution of Mary, Queen of Scots. Then, take a look at the mysterious disappearance of two of King Edward’s descendants.