Meet William Wallace, The Scottish Rebel Who Became A Martyr For His Country

The heroic Scottish warrior who inspired Braveheart, William Wallace led his people in their rebellion against the English until his torturous death in 1305.

In 1995, Mel Gibson rode to box office riches as William Wallace, the legendary Scottish warrior who fought for his country’s independence in the late 13th century. But how much of the movie Braveheart is true?

Much of what we know about William Wallace comes from the tales of a minstrel named Blind Harry. His stories about Wallace were so popular that, for centuries, his book was outsold only by the Bible in Scotland.

Although the 1995 film captures some parts of Wallace’s story accurately, it greatly exaggerates others. The historical inaccuracy of the costumes, for example, led one historian to compare Braveheart to “a film about Colonial America showing the colonial men wearing 20th-century business suits.” 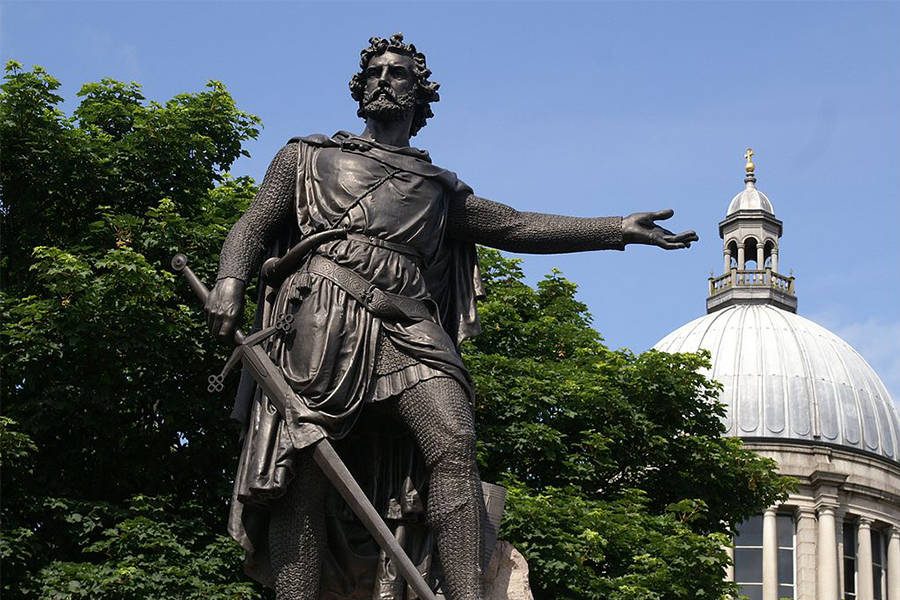 But on the flip side, Braveheart also downplays some real-life events — such as the goriness of Wallace’s execution. As a Scottish knight who rebelled against English rule, Wallace was condemned to a death that was brutal even by Medieval standards. Much of the reason why his story still resonates in Scotland today is that he was willing to sacrifice himself for his country.

This is William Wallace’s remarkable story. 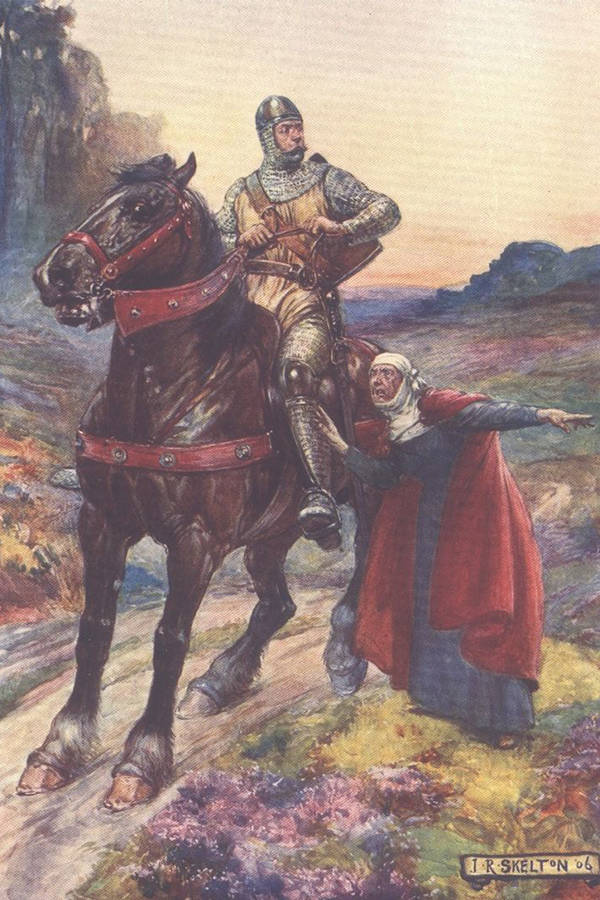 William Wallace was likely born between 1270 and 1275, the younger son of a Scottish landowner and knight.

Little is known about his early life. However, it seems that Braveheart took great liberties in describing the deaths of his father, brother, and even his wife. They were most likely not mowed down by the English. And some scholars have even questioned whether his wife actually existed.

So, if thirst for revenge didn’t set Wallace on his fatal course, then what did? To put it simply, politics.

The burning issue of Wallace’s day had to do with succession. The Scottish King Alexander III died unexpectedly in 1286. And then the heir, his granddaughter, died unexpectedly while she was en route to claim the throne. Scotland burst into a Game-of-Thrones-type jostle for power and the country threatened to teeter toward civil war.

The English king, Edward I, took advantage of the instability. To the horror of many Scots — including Wallace — he invaded the country and imposed himself as Scotland’s ruler. But Wallace soon fought back. 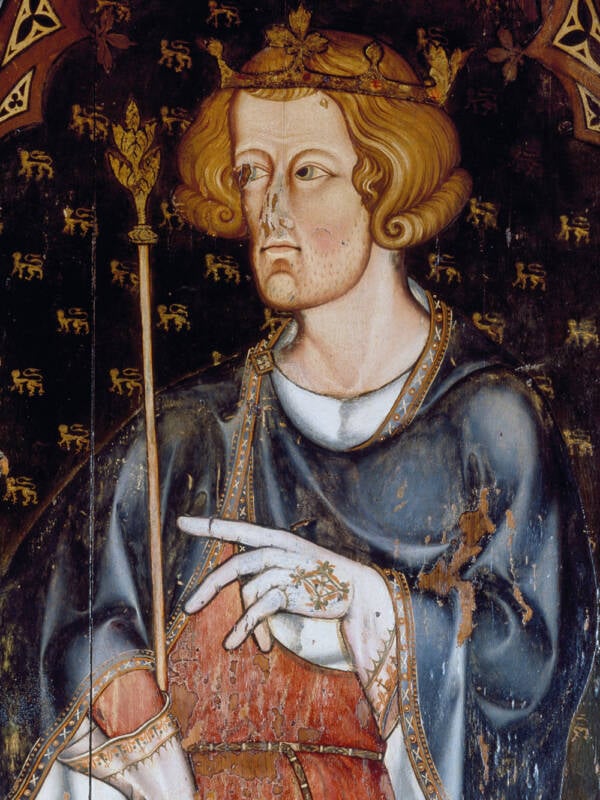 Wikimedia CommonsKing Edward I of England invaded Scotland in 1296 and assumed power.

But Wallace’s first act of rebellion was not, as Braveheart suggests, defending the honor of his wife. Instead, it was the assassination of an English High Sheriff in May 1297. Many young Scottish men were inspired by Wallace’s actions — and quickly flocked to his side to fight under his banner.

What made Wallace such an inspiring leader? It’s certainly possible that he had prior military experience. He may have even once fought for the King of England, instead of against him, as a mercenary soldier. But legend also describes Wallace as a very tall man — who likely stood out during a time when the average male height was on the shorter side.

In Blind Harry’s telling, Wallace is seven feet tall. Centuries later, Wallace was described by Walter Brower — who wrote a history of Scotland in the 14th century — as “a tall man with the body of a giant, cheerful in appearance with agreeable features, broad-shouldered and big-boned… pleasing in appearance but with a wild look, broad in the hips, with strong arms and legs, a most spirited fighting-man, with all his limbs very strong and firm.”

So, even if Wallace had no military experience, it seems that he at least looked like he could become a mighty warrior. And the men in Scotland who were “oppressed by the burden of servitude under the intolerable rule of English domination” rushed to Wallace’s side “like a swarm of bees.”

Scotland Strikes Back At England 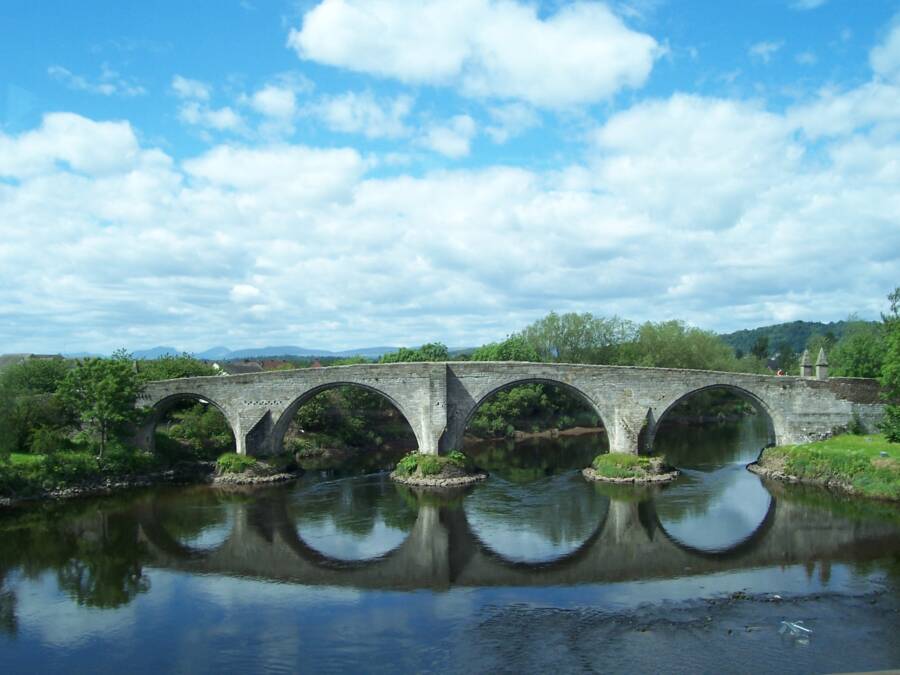 Wikimedia CommonsStirling Bridge today. In September 1297, it served as the background for a Scottish victory against the English.

The uprising had begun.

As William Wallace and his men fought the English in the south of the country — at Scone, Ancrum, and Dundee — a separate rebellion had begun in the north. A young Scotsman named Andrew Murray — who is not mentioned in Braveheart — had formed his own powerful army.

Wallace and Murray’s combined efforts succeeded in liberating most of Scotland. And on September 11, 1297, they faced off against the English together at the Battle of Stirling Bridge.

During this battle, Wallace and Murray relied on their superior knowledge of the terrain to win the day. The Scots lay in wait as the English began to make their way over the Stirling Bridge, a narrow stone overpass that served as the only way to cross the river.

When the English forces were cut in half — divided by the narrow bridge, which would have taken the army hours to cross — the Scots pounced. They easily slaughtered the men who had already crossed.

The Scottish victory was enormous. Some 5,000 Englishmen were killed. As Bowers later boasted: “The Scots adopted a stout heart at the instigation of William Wallace, who taught them to fight…[and] the Scots vanquished the English.” Today, the battle is marked by the National Wallace Monument.

But the Scots would not escape the battle entirely unscathed. Andrew Murray was seriously wounded and would die two months later. Even Wallace’s victory would prove to be short-lived. The English, shocked at the Scottish win, rallied around King Edward. 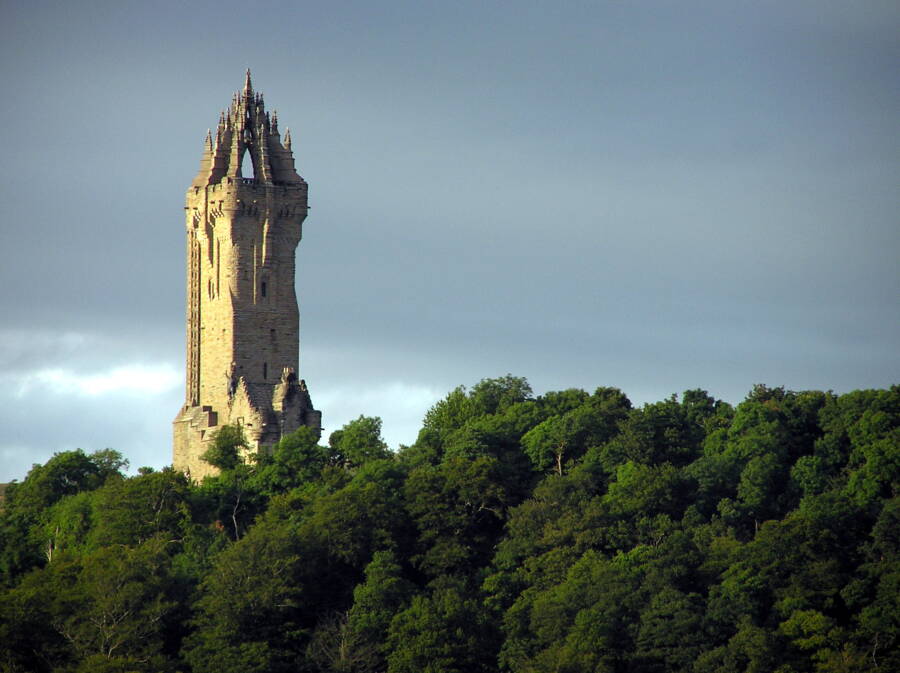 Wikimedia CommonsThe Wallace Monument in Scotland marks the spot where William Wallace defeated the English at the Battle of Stirling Bridge.

Following his victory, William Wallace’s political prospects skyrocketed. He was now a knight, the “Commander of the Army of the Kingdom of Scotland,” and named the “Guardian of Scotland” by the Scottish royals. This gave Wallace military power, political power, and a great social standing — not bad for a young man in 13th-century Scotland.

Brimming with confidence, Wallace wasn’t satisfied to wait for the English to strike Scotland again. Instead, he led his troops into English territory, ravaging Northumberland and Cumberland counties and terrorizing the general public. Stories quickly spread about the horror that Wallace could unleash upon Englishmen. In one story, he was accused of flaying a dead English soldier and keeping his skin as a trophy.

The English weren’t necessarily happy with King Edward I as the leader. But they feared William Wallace more — and united behind Edward as he plotted a return to Scotland.

When Edward invaded, Wallace danced back out of his grip. He was determined to pull the English king deeper and deeper into Scottish territory, where Wallace would have the upper hand. But in July 1298, the English caught up to the Scottish at Falkirk — with devastating results. 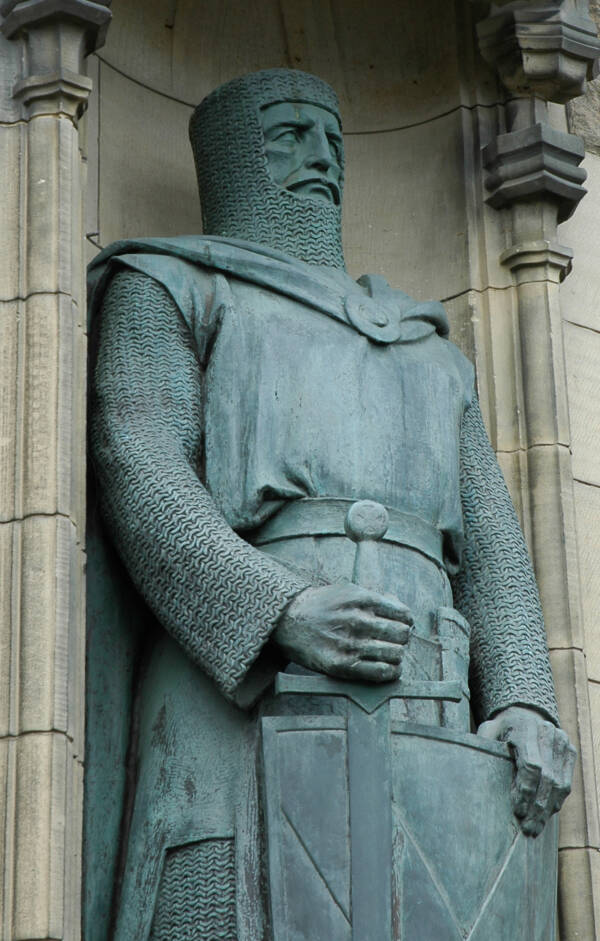 Wikimedia CommonsThe statue of William Wallace at Edinburgh Castle. The inscription below reads in part: “His bold companions call’d to free/ The Realm from Edward’s Iron Yoke.”

William Wallace is alleged to have rallied his men by saying: “I hae brocht ye to the ring, now see gif ye can dance.” One historian later remarked that what happened next was a “dance of death.”

This time, the English were ready. William Wallace had severely underestimated his foes. Not only were the Scots greatly outnumbered, but the English possessed a new weapon of war: Welsh longbows. The Scottish spearmen didn’t stand a chance. Wallace escaped the battle with his life. However, his military reputation wasn’t so lucky.

But Wallace was just down — not out. Although he resigned his guardianship, he was determined to remain useful to Scotland. He worked as a diplomat for the next several years, trying to convince European powers, especially in France, to support Scottish independence.

The English weren’t going to let Wallace get away so easily. While he was abroad campaigning for Scotland, Scottish leaders at home were making deals with the English. They, unlike Wallace, were willing to compromise.

King Edward I offered a reward to anyone who could kill or capture Wallace. And on August 3, 1305, Wallace was arrested at Robroyston, near Glasgow, by a fellow Scotsman, Sir John Menteith.

The Trial, Death, And Legacy Of William Wallace 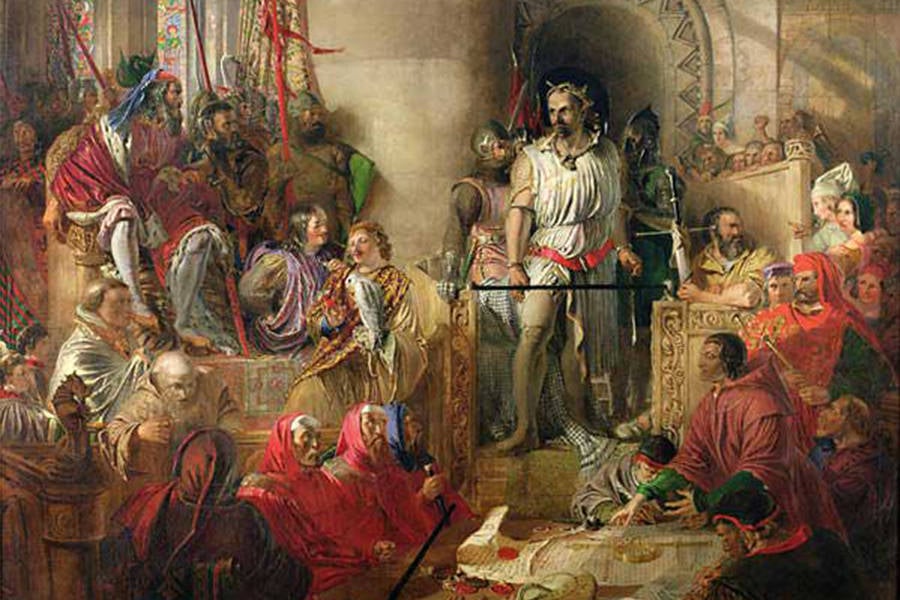 After his arrest, Wallace was brought to London and charged with being an outlaw and a traitor. Wallace furiously denied this. Despite not being allowed to speak in his own defense, he cried that he was “a Scot, born in Scotland, and did not recognize England as his sovereign nation.”

In his mind, an English king had no right to charge a Scottish citizen with treason. Unsurprisingly, the English were unmoved by this plea. Wallace was sentenced to be hanged, drawn, and quartered.

This punishment — for treason — was one of the worst ways to die during Medieval times. And Wallace’s death is portrayed with gruesome detail in Braveheart. In the movie, he is hanged until he almost loses consciousness, stretched, disemboweled, and then beheaded.

But the true story behind his execution is actually much worse.

Before he was chopped up into pieces, Wallace was dragged to his execution by four different horses that were each tied to one of his limbs. (This was usually done to prisoners the king despised most.) This went on for miles and miles before he was hanged to the point of near-death.

He was then brutally mutilated. Not only did he have his genitals sliced off, but he also had his entrails pulled out — while he was still breathing.

Wallace’s innards were then burned in front of him before he was finally decapitated and dismembered. After the execution, his remains were famously scattered all over the land as a warning to other potential traitors. The English stuck his head on a spike and then sent the rest of his body parts around the country to be put on display.

But the Scots did not put down their weapons just because Wallace was gone. They continued actively fighting against English rule well into the 14th century. And the country would fiercely defend its independence until they ultimately joined England in the United Kingdom in 1707.

There’s no question that Wallace met an inglorious end. But even though he died a horrific death — and his beloved country would eventually lose its independence — his legacy is alive and well in Scotland in modern times.

When American film screenwriter Randall Wallace was on a tour of the Edinburgh Castle, he noticed an impressive statue of a warrior who had the same last name. He asked his Scottish guide if he knew anything about this “William Wallace.”

The guide responded: “That sir, is our greatest hero!”

After learning about William Wallace, check out Sawney Bean, Scotland’s most infamous cannibal. Then, read about the Darién scheme, Scotland’s failed attempt to build a colonial empire in the Americas.