Condemned as a traitor to the English king in August 1305, William Wallace faced a torturous execution that was considered gruesome even by medieval standards. 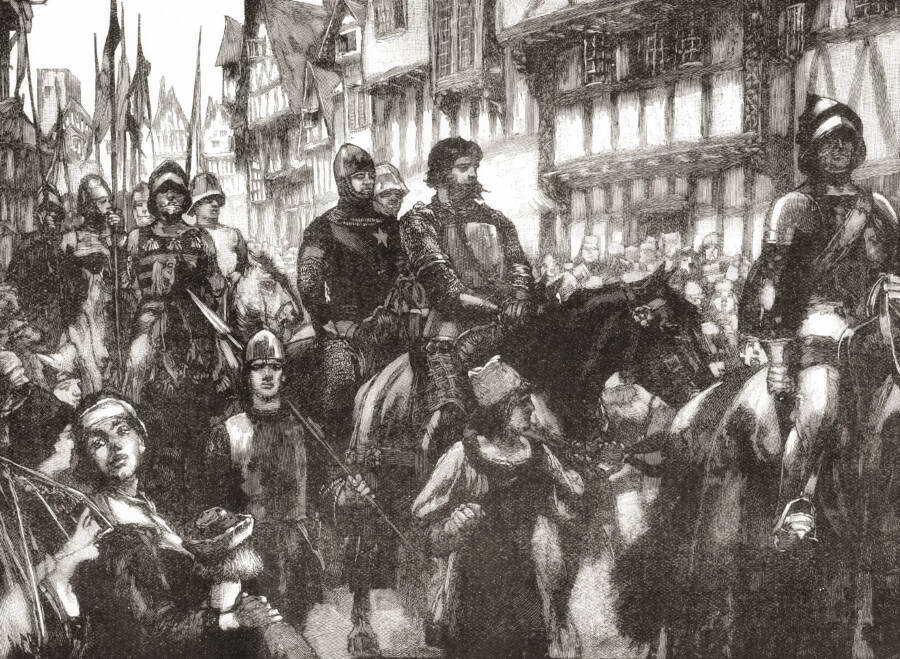 Universal History Archive/Universal Images Group via Getty ImagesLegendary Scottish warrior William Wallace depicted shortly before he was tried for treason and put to a gruesome death in 1305.

Anyone who has seen the 1995 film Braveheart knows that William Wallace died in an especially gruesome fashion. But the Scottish warrior’s real-life execution was even worse than in the movie.

Born in 1270, Wallace rose to fame during the First War of Scottish Independence from the English. Perhaps motivated by patriotism, and perhaps by the death of his wife at the hands of the English, Wallace wowed his countrymen by leading them to victory at the Battle of Stirling Bridge.

Then, William Wallace upped the stakes. Named as Guardian of the Kingdom of Scotland, Wallace led raids into English territory and attracted the ire of the English king, Edward I. But when England responded at the Battle of Falkirk, Wallace and his men were defeated by English longbows.

From there, William Wallace’s death was inevitable. Though the warrior resigned his guardianship, he remained a threat in the eyes of Edward I. In 1305, Wallace was betrayed by a fellow Scot, captured, and put on trial.

Found guilty, Wallace was stripped naked, dragged behind horses for miles, and castrated — all before the English tore out his heart, lungs, and other organs, and beheaded and quartered his body in front of a roaring crowd.

This is the grisly true story of William Wallace’s death.

How William Wallace Became The Rebel King Of Scotland 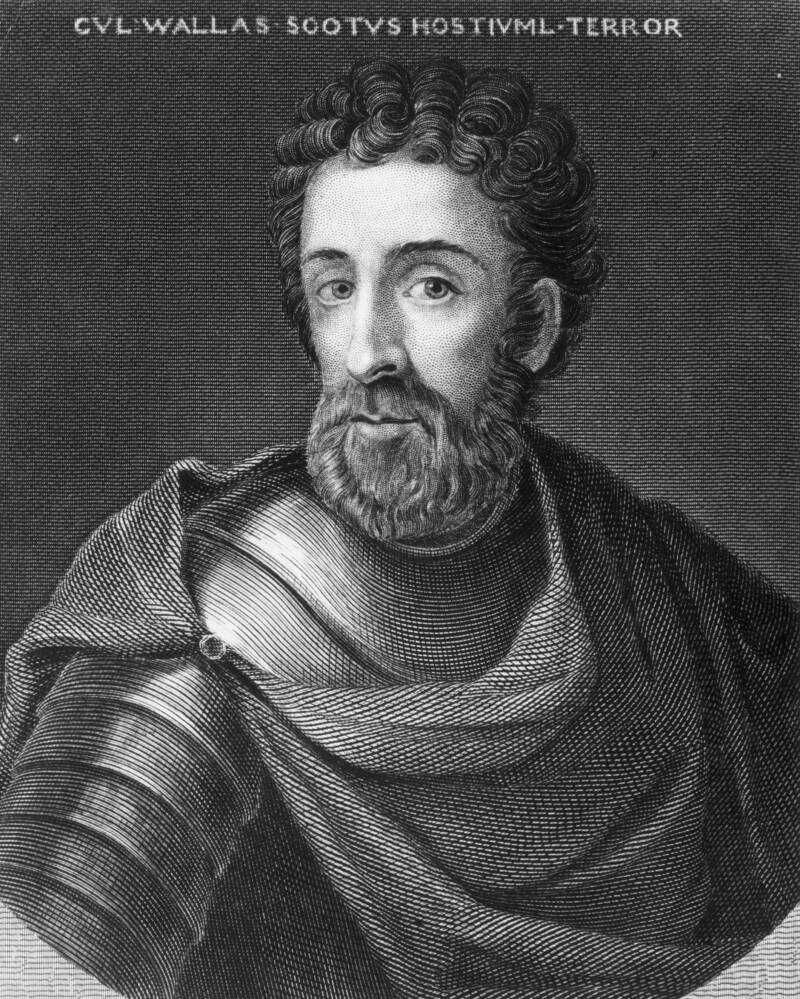 Most of what we know about William Wallace today comes from a 15th-century poem by minstrel Blind Harry entitled, Actes and Deidis of the Illustre and Vallyeant Campioun Schir William Wallace.

Written 172 years after William Wallace’s death, the poem suggests that Wallace was born around 1270 in Elderslie, Scotland. Though the exact details of Wallace’s early life are unclear, one thing seems certain — he despised the English.

The Scotsman noted that Wallace refused to sign the Ragman Rolls, documents that pledged the allegiance of Scottish gentry and nobility to the English crown. Additionally, Undiscovered Scotland reported that Wallace became an “outlaw” for killing a number of Englishmen long before he became a “freedom fighter.”

And Wallace’s ire for the English only increased in May 1297. Then, possibly following the death of his wife Marion Braidfoot at the hands of English troops, Wallace led a group of Scots to Lanark Castle, where they slaughtered the High Sheriff Sir William Heselrig and every English soldier there they could find.

Just a few months later, in September 1297, Wallace and another warrior named Andrew de Moray met the English at the Battle of Stirling Bridge. Though two English friars attempted to convince the Scots not to fight, Wallace refused to back down.

“Return to thy friends,” Wallace told the friars, “and tell them we come here with no peaceful intent, but ready for battle, determined to avenge our wrongs and to set our country free. Let thy masters come and attack us; we are ready to meet them beard to beard.” 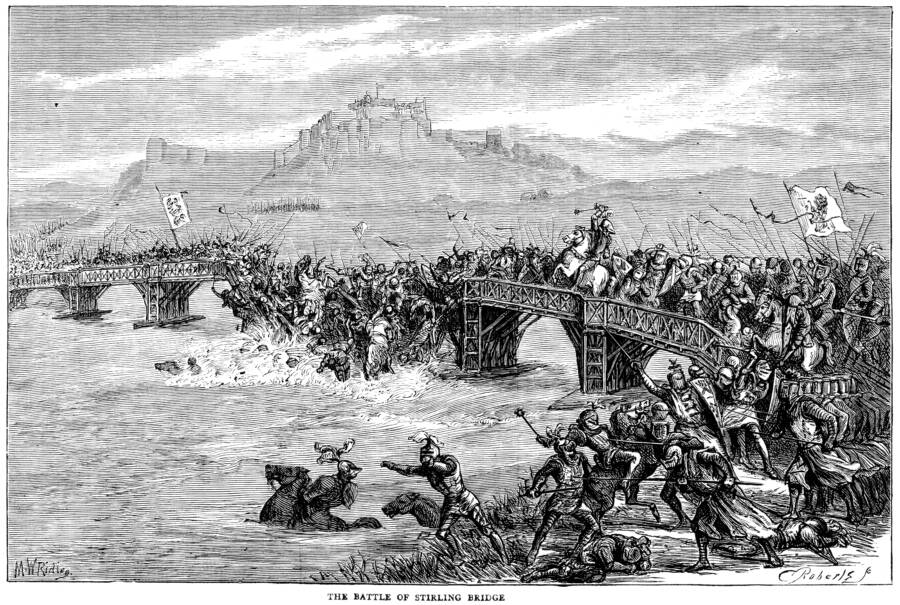 Getty ImagesA depiction of the Battle of Stirling Bridge, which took place on Sept. 11, 1297.

William Wallace decisively defeated the English at the Battle of Stirling Bridge and was named a Guardian of the Kingdom of Scotland. But his victory was short-lived.

Less than a year after the Battle of Stirling Bridge, English troops led by King Edward I met Wallace and his men again at the Battle of Falkirk on July 22, 1298. And this time, they were ready.

Twice the size of Wallace’s forces and armed with longbows, the English troops made quick work of their Scottish foes. Edward I’s troops decimated one-third of Wallace’s men.

Though Wallace’s reputation was in ruins — he went on the run and resigned his guardianship following the battle — Edward I was determined to punish the Scottish rebel nonetheless. In August 1305, the king got his chance.

The Gruesome Death Of William Wallace 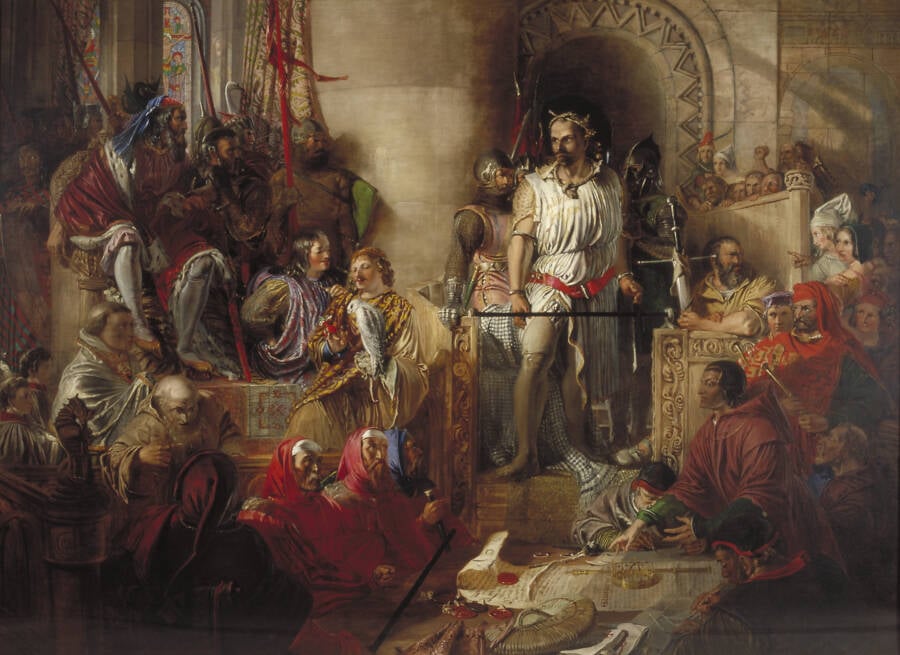 On August 3, 1305, William Wallace was captured by English troops after years on the run. Betrayed by a friend loyal to Edward I, Sir John Menteith, Wallace was put in chains and sent on a 17-day-journey to London.

There, at Westminster Hall, Wallace stood trial for treason and other charges. The Scottish warrior was forced to wear a garland of oak as the “king of the outlaws” and stood accused of “sparing neither age nor sex, monk nor nun” as he raided the country.

Though Wallace admitted that he’d “slain the English” and had “mortally opposed the English king,” he denied that he was guilty of treason. Wallace is said to have adamantly declared, “I can not be a traitor, for I owe [Edward I] no allegiance. He is not my Sovereign; he never received my homage; and whilst life is in this persecuted body, he never shall receive it.”

After a brief trial, the Scottish warrior was found guilty on August 23. And Edward I made sure that William Wallace’s death would set an example for anyone tempted to follow in his footsteps. 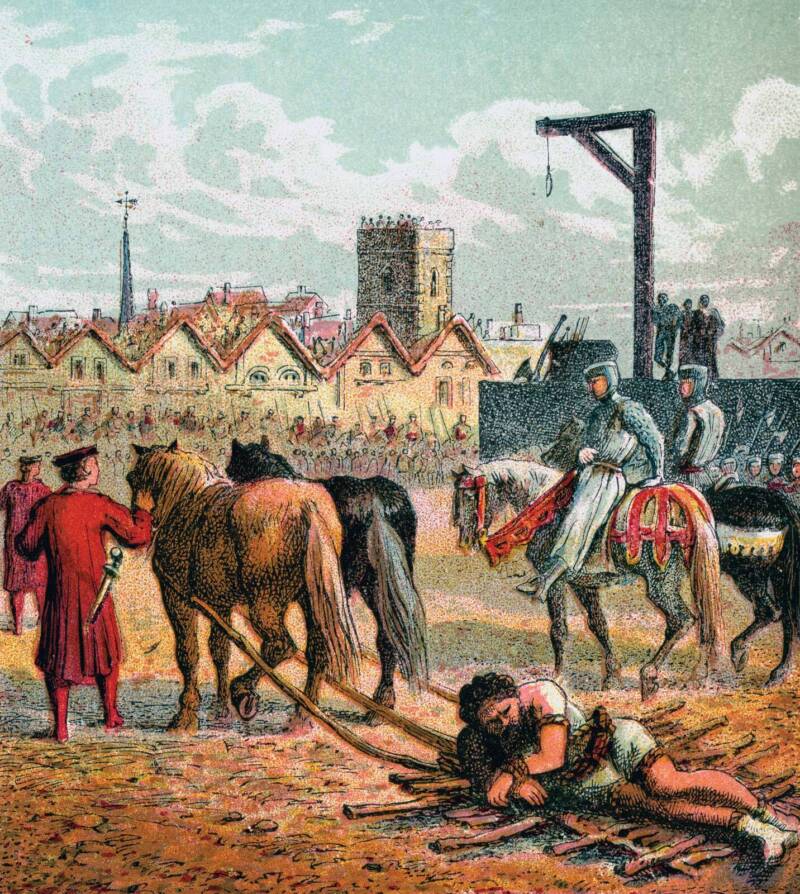 Wallace was promptly stripped naked and tied to a hurdle attached to two horses. He was dragged for six miles from London toward the gallows in Smithfield as crowds jeered, threw trash and excrement, and beat him with sticks.

According to Undiscovered Scotland, William Wallace’s death didn’t end his suffering. His body was also cut into quarters and put on display in Newcastle, Berwick, Stirling, and Perth. The English also triumphantly stuck Wallace’s head on a spike at London Bridge.

But though William Wallace’s death ended his life, it didn’t smother his legacy. Today, he’s seen as a national hero in Scotland. 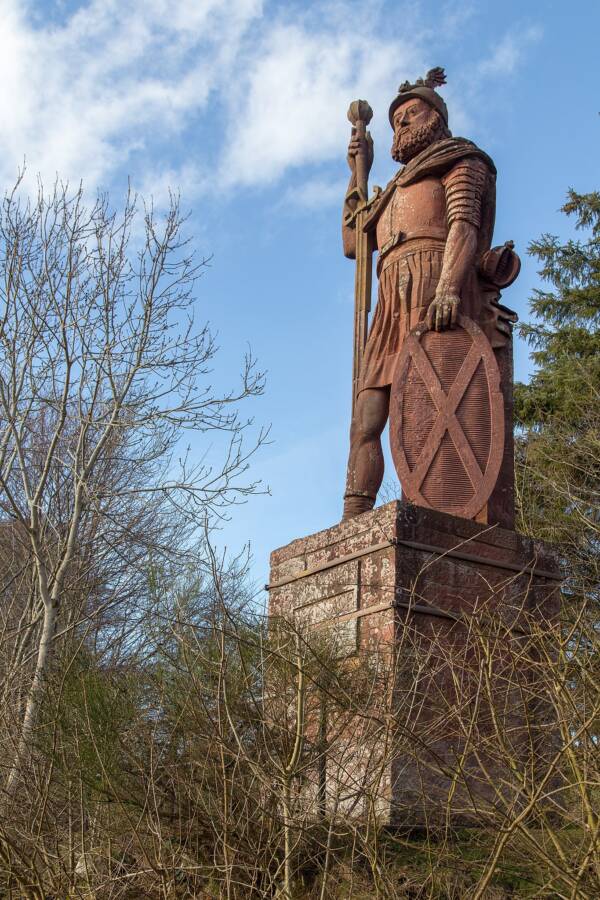 A year after William Wallace’s death, his fellow Scotsman Robert the Bruce, successfully raised a rebellion. Wallace’s gruesome execution had convinced his countrymen to stay the course, and Bruce’s uprising eventually led to Scottish independence from England.

As such, William Wallace is seen as a national hero in Scotland today. And the depiction of his story in the 1995 film, Braveheart, arguably rejuvenated the cause of Scottish nationalism.

Since the 18th century, Scotland and England have existed under the banner of Great Britain. But Undiscovered Scotland argues that, following Braveheart‘s release, there was a new appetite for Scottish independence. Two years later, in 1997, Scotland voted to have its own parliament.

“The point is that the historical accuracy of the film doesn’t really matter,” Undiscovered Scotland noted. “What matters is the fact that it sparked a resurgence in a sense of Scottish national identity that during much of the 20th Century had appealed to only a minority of Scots.”

And the cry for Scottish independence has only gotten louder in recent years. In 2014, Scottish voters narrowly decided to stay in the United Kingdom, with 55 percent voting to stay and 45 voting to leave. What’s more, the First Minister of Scotland, Nicola Sturgeon, has pushed to have a second referendum on Scottish independence in 2023.

It’s been more than 700 years since William Wallace’s death, but this Scottish national hero casts a large shadow over his country. His fight for independence, and gruesome execution, make up an important part of Scotland’s past — and maybe even its future.

After reading about the death of William Wallace, discover the true story of Mary, Queen of Scots. Or, learn about the Picts, the ancient Scottish people who held off the Romans.