Mary, Queen Of Scots: From The Infant Queen To A Grisly Execution, The Tragic True Story

She endured three husbands' deaths, was betrayed by Elizabeth I, and ultimately suffered a gruesome execution. This is the tragic story of Mary Stuart, Queen of Scots.

Mary, Queen of Scots, also known as Mary Stuart, was born into conflict. She assumed the throne as queen of Scotland when she was just six days old, upon the death of her father.

From the beginning, her life was mired in struggle as she grappled with the demands of the Scottish throne and the deaths of several husbands. The next act of her life was dominated by a war of wits against her own cousin, Queen Elizabeth I, and a painful series of betrayals as her own family plotted against her. 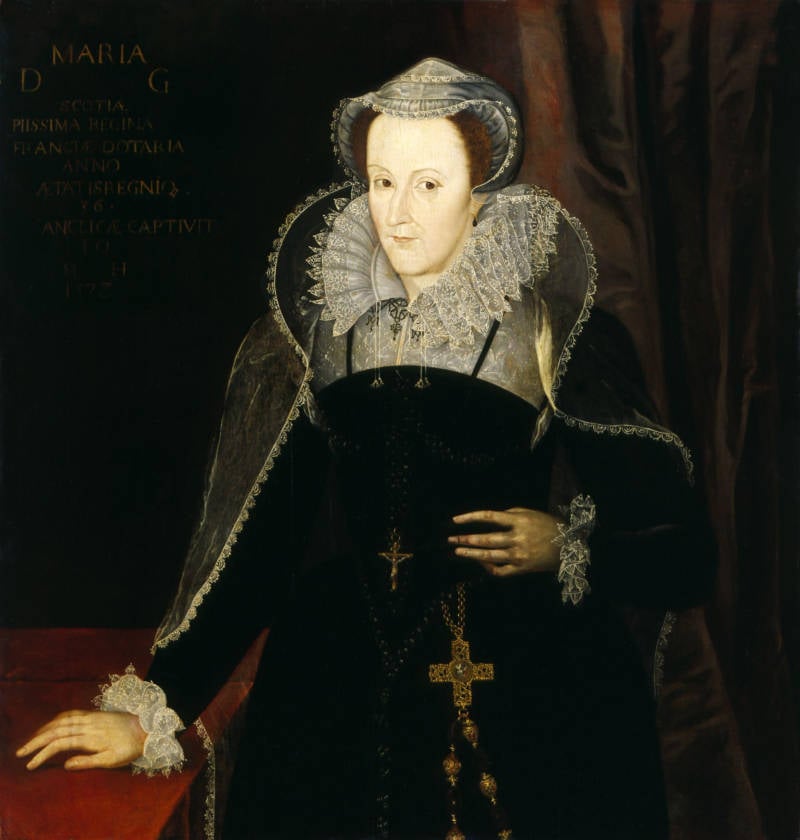 Mary, Queen of Scots’ life was marred by poor decision-making and political strife.

This long struggle ended after she was forced to abdicate and her own son, James VI, betrayed her. She then met one of the most gruesome deaths in the history of European royalty.

But though the life of Mary, Queen of Scots was marked by tragedy, her courage in the face of her dark fate remains remarkable 450 years after her untimely demise. 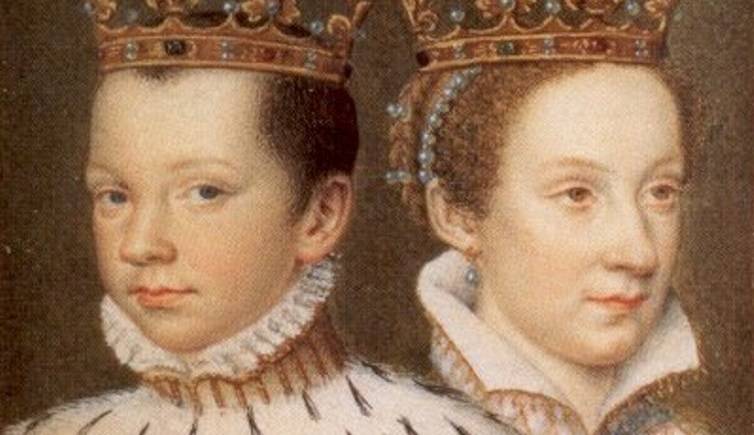 Mary, Queen of Scots was only six days old when she was crowned queen in 1542: she weighed the same as the crown on her head. She was also born in a tumultuous time, as King Henry VIII of England invaded her homeland of Scotland.

At the height of this war though, Mary’s father King James V of Scotland died. He was left with no other living heirs than his infant daughter. But his death made Mary more than just the Queen of Scots.

Her cousin, Henry VIII, had converted to Protestantism so that he could divorce his first wife. His conversion fractured his relationship with his family and erupted the British Isles into a series of furious conflicts between Catholics and Protestants.

But the Catholic Church still didn’t recognize any of Henry’s marriages after his divorce. His children, they believed, were the illegitimate bastards of a bigamist. As far as they were concerned, Mary was the heir to his throne.

To combat this and maintain his power, Henry VIII demanded a marriage between the infant Mary and his son, Edward VI. The marriage would have forced Mary to convert to the Protestant faith and would have put an end to her claim to the throne. But the Scots refused. Mary, instead, was married off to the Catholic Prince of France in a bid for France’s support. Thus her claim to the British throne was signed over to France.

To the Catholics, the French, and the Scottish alike, Mary, Queen of Scots symbolized a chance to take over the English throne. This meant that to the English, she was the greatest threat imaginable.

She was just a baby, but she was already at the center of a massive, continental war. Her fate was inextricably tied to the fates of not only England, Scotland, and France, but to also Catholics, Protestants, and Monarchies at large.

The Two Queens Of England 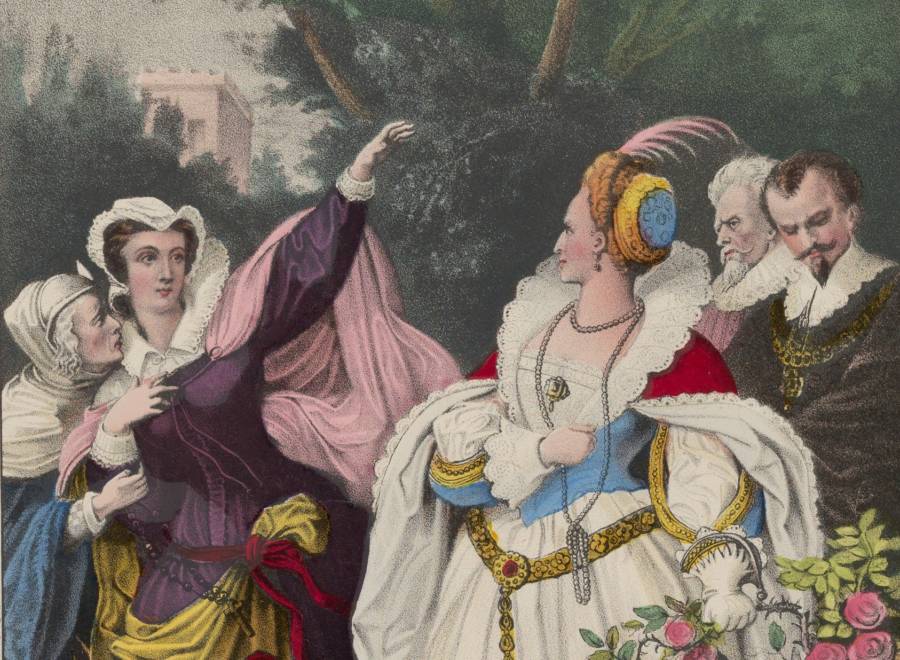 For the first 18 years of her life, Mary barely set foot in Scotland.

She had been rushed off to France when she was just five years old where she spent 13 years as a French princess and eventually as the Queen of France after the death of the French King Henry II.

She didn’t return to Scotland until her husband, Francis II, died of an ear infection, leaving her a widow at age 18. The throne of France was passed on to her brother-in-law, Charles IX, and Mary was sent back to rule over the country of her birth; a place she hadn’t seen since she was a child.

Scotland wasn’t the place she’d known as a child any longer. A growing faction of Scottish Protestants had sided with the English and was becoming an officially Protestant country under the religious reforms led by John Knox — a Scottish minister, theologian, and writer.

To make matters worse, though England was now under the rule of Mary’s cousin, Queen Elizabeth I, the kingdom of France had declared that they recognized only Mary, Queen of Scots, as the rightful ruler over England. Neither woman gave much ground. Mary refused to sign a treaty recognizing Elizabeth as the ruler of England, and Elizabeth refused Mary’s request to recognize her as her heir. 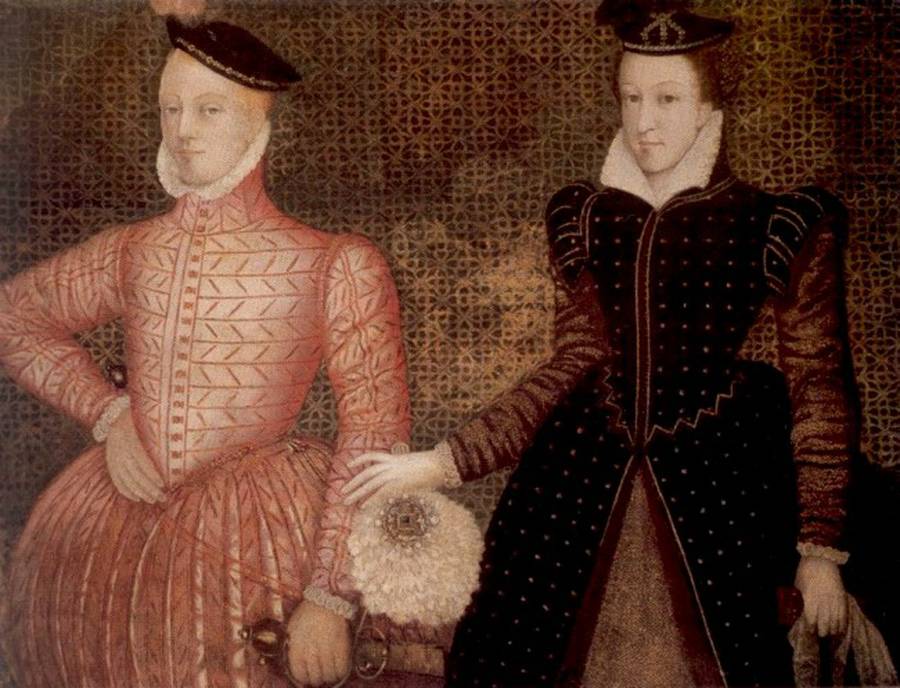 Mary, Queen of Scots tried to keep the peace and win the love of Scotland’s citizens by promoting religious tolerance toward the Protestants. She even married an Englishman, her first cousin Lord Darnley, in 1565. Likely, this was a way for her to strengthen her claim to the English throne; but instead, the marriage put in motion a series of events that would end in her grisly demise.

Lord Darnley was brutally abusive and jealous. He became convinced that Mary was having an affair with her secretary, David Riccio. Lord Darnley consequently had Riccio murdered. Mary’s secretary was stabbed 56 times as she, heavily pregnant, was forced to look on. 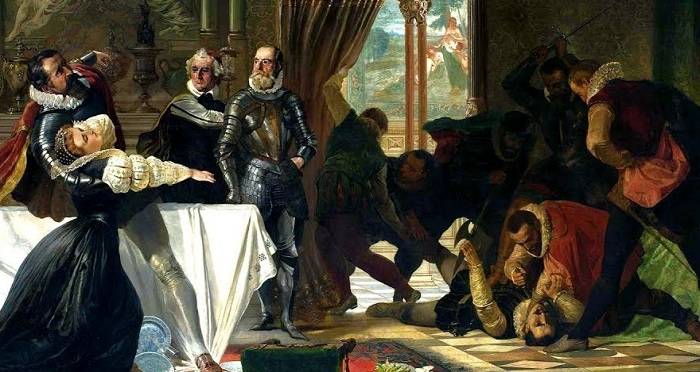 But Darnley was the father of her firstborn son, and under Catholic rules, she was forbidden to divorce. The only way she could get away from Darnley was if he died.

On the morning of February 10, 1567, a mysterious explosion at Kirk o’ Field house outside Edinburgh, killed Lord Darnley. Mary was an immediate suspect. Rumors spread that Darnley had been killed under Mary’s orders by her confidant James Hepburn, the 4th Earl of Bothwell and a prominent adviser to Mary.

Bothwell was acquitted of any charges of Darnley’s murder, but any lingering doubts were merely strengthened when, almost immediately after the trial was over, he married the Queen of Scots. 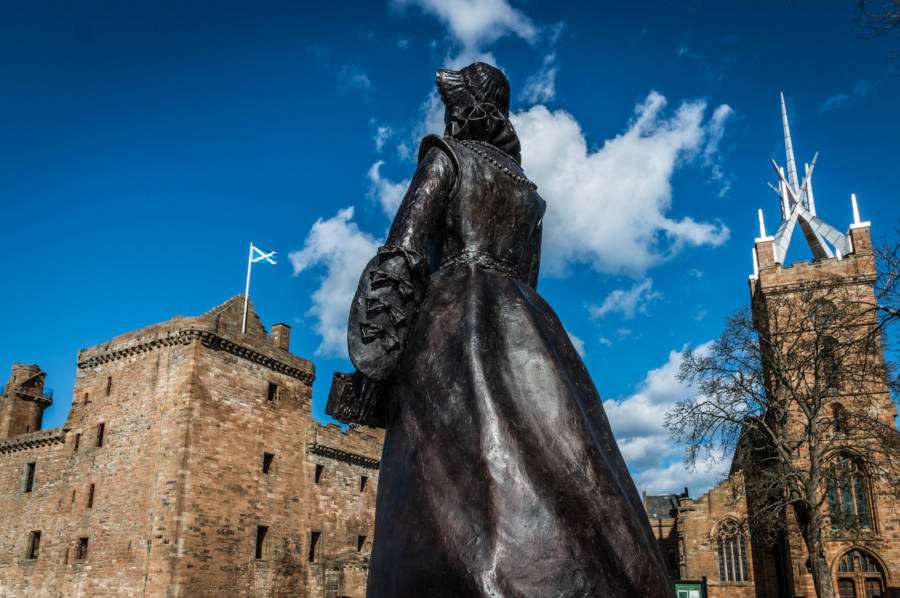 Mary’s third marriage to Bothwell was no happier than her second. By some accounts, she didn’t even enter it willingly. Though he had become a close confidant of Mary’s, it’s said that Bothwell also possessed a great influence over her. He also had his own ambitions to become King and used his power over Mary to try to realize those ambitions.

But their marriage was seen by most as proof that the two had conspired in Darnley’s death.

Mary was denounced as an adulteress and a murderer. Her Protestant Lords revolted against her. This led to a confrontation between her army and the Scottish Nobility at Carberry Hill, near Edinburgh, on June 15, 1567. Mary’s army was defeated and she was subsequently imprisoned in Loch Leven Castle.

Her new husband Bothwell fled to Scandinavia where he was captured and imprisoned as well. Mary would not see him again.

Her son James, who was but one year old, was taken from her and given her crown. While imprisoned, Mary gave birth to stillborn twins.

She made a brief attempt at escape from Loch Leven. George Douglas, her prison warden’s brother, helped her to raise a small army and break out of prison. This attempt was thwarted.

Mary fled to England, eventually. The ties of blood, she believed, were stronger than all else that had come between her and Elizabeth, and she was convinced that her cousin would help her win back her throne.

But Mary was wrong. Queen Elizabeth had Mary dragged into custody again and thrown into the formidable fortress of Sheffield Castle for 14 years followed by 5 years at various other fortresses.

In the years leading up to her impending doom, Mary begged her cousin to pardon her and show mercy. But Elizabeth’s court was growing increasingly paranoid about their hold over the crown and ignored Mary’s pleas. Mary would spend 19 years in captivity under the hawkeye of her own cousin.

The Grisly Execution Of Mary, Queen Of Scots 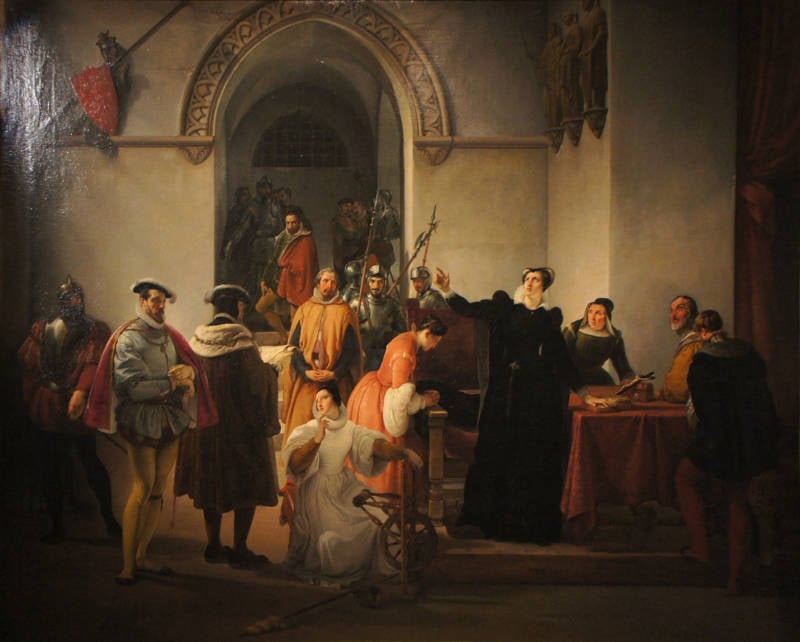 Many believed Elizabeth to be an illegitimate queen to England, as her father Henry VIII’s marriage to her mother, Anne Boleyn, was not recognized by the church. As such, plots against Elizabeth’s reign were not unusual. The queen, consequently, was typically anxious.

With Mary under her charge, Elizabeth grew only more paranoid. When letters regarding a plot against Elizabeth were discovered between Mary’s jailer and a Catholic priest, Mary was immediately implicated in having plotted against Elizabeth herself. She was thus deemed guilty of treason in what became known as the Babington Plot.

Elizabeth declared of her cousin: “so long as there is life in her, there is hope; so as they live in hope, we live in fear.”

Mary’s son, now pursuing his own ambitions as a politician, recognized that an alliance with Queen Elizabeth I would ensure his own ascension to her throne upon her death. He thus signed an alliance with England and began to cut ties to his Scottish ancestry. This included abandoning his mother, now facing execution.

She would receive only formal protests from her son on her behalf. 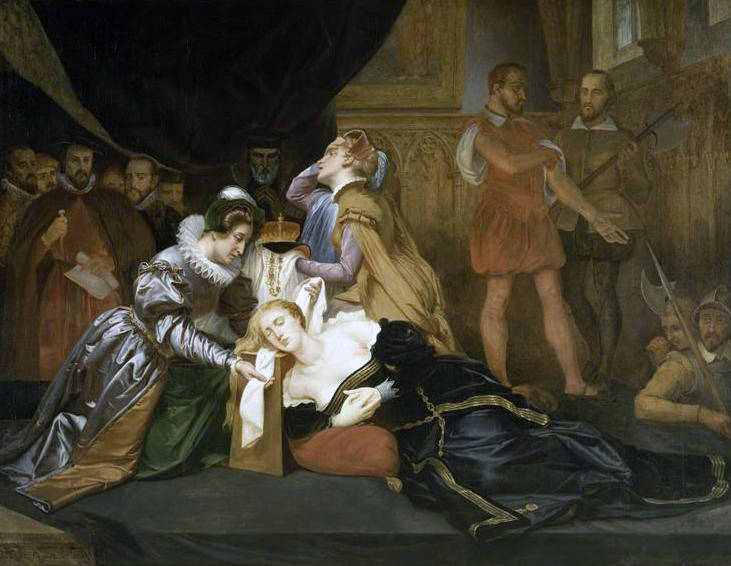 On February 7, 1587, Mary was sent to the gallows at Fotheringhay Castle.

“Look to your consciences,” she told the courtroom, “and remember that the theatre of the whole world is wider than the kingdom of England.”

Elizabeth signed the death warrant herself.

Mary spent hours in prayer, not stopping until they dragged her off to the scaffold where she would die. She smiled, in her last moments. Before placing her head on the block she told the executioner: “I hope you shall make an end of all my troubles.”

It wasn’t quick. The first blow of the ax missed Mary’s neck and became wedged in the back of her head. The second was too weak and left her neck severed but the woman still agonizingly alive. But the third did it.

The grisly details didn’t stop there. As one eyewitness recorded: “Her lips stirred up and a down a quarter of an hour after her head was cut off.”

Soon, her dog even showed up, with that same eyewitness saying:

“Then one of the executioners, pulling off her garters, espied her little dog which was crept under her cloths, which could not be gotten forth by force, yet afterward would not depart from the dead corpse, but came and lay between her head and her shoulders, which being imbrued with her blood was carried away and washed.”

When it was over, the executioner held up her severed head and told the crowd: “God save the Queen.”

But the Queen wasn’t there.

The official trailer for Mary, Queen of Scots.

The tumultuous and complicated relationship between the two women was dramatized in the 2018 film starring Saoirse Ronan as Mary, Queen of Scots and Margot Robbie as Queen Elizabeth I. The movie has been criticized for historical inaccuracies as it displays the two women meeting one another.

But this never happened. Even at her execution, Queen Elizabeth was not present. For although all their lives had revolved around one another, the two women never once stood in the same room.

The body and head of Mary, Queen of Scots are currently interred at Westminster Abbey, where they were brought initially at the request of her son, James. From James’ betrayal to all the death that surrounded Mary’s story — especially her own demise — she remains a tragic figure to this day.

After this look at Mary, Queen of Scots, read about Mary Boleyn, the other Boleyn girl who wooed Henry VIII. Then, brush up on your British royal history trivia and review all of King Henry VIII’s wives.