Christmas Tree History: The Origins Of A Strange Tradition

Like many Christmas traditions, evergreens were once used in pagan winter solstice celebrations.

Few symbols encapsulate the Christmas season quite as well as the Christmas tree. Each year, homes throughout the world are illuminated by festive lights; strands of tinsel and ornaments reflecting brightly in the window as the people inside warm themselves by the fire sipping eggnog and awaiting the arrival of Santa Claus.

Then, in January, when the pine needles have overstayed their welcome, those same trees decoratively line the curb, awaiting the arrival of waste management. But, why?

As a tradition, chopping down a tree, bringing it into your home, and covering it in decorations is, frankly, a bit odd. Yet, it’s a pervasive element in Christmas celebrations across the world despite having seemingly little to do with Christianity itself — in fact, the tradition predates the religious ceremony to which it has become attached.

Indeed, the surprising history of Christmas trees originates with pagan winter solstice celebrations, a fact that once made the now-popular symbol a point of contempt in Christian cultures.

So, how did this once controversial symbol become a central element to Christmas celebrations?

The Importance Of Evergreen Trees In Pagan Yule Celebrations

Like many pagan traditions, the exact birthplace of and meaning behind symbolic evergreen trees has been muddied by history, but historians have been able to at least somewhat identify the where and why in a broad sense.

“Evergreens at midwinter festivals were traditional since the ancient world, signifying the victory of life and light over death and darkness,” Carole Cusack, a professor of religious studies at the University of Sydney, told National Geographic 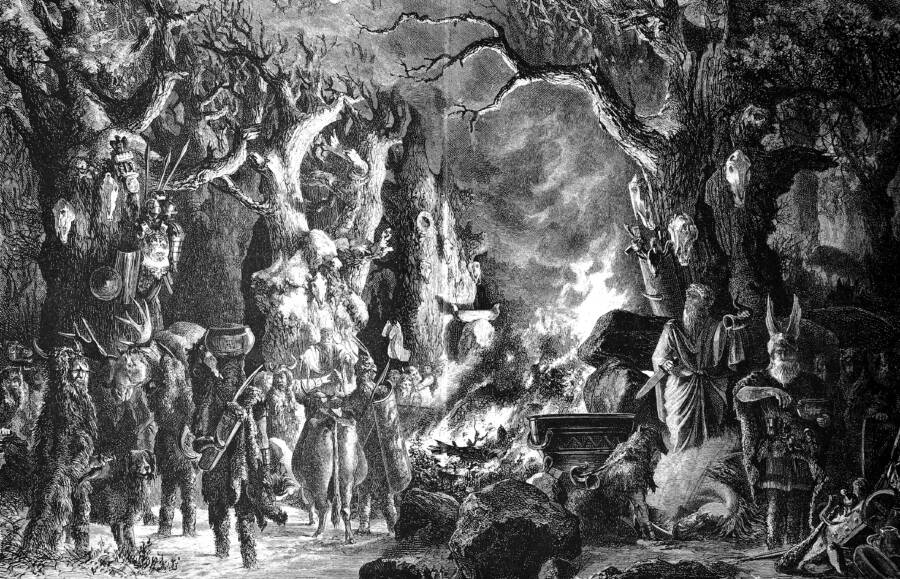 Multiple countries have laid claim to originating the tradition, but historians have been able to trace it, at the very least, to Northern Europe, where the forests were flush with evergreen trees.

Evergreens likely held a special significance in pagan cultures because they retained their color in the winter months; whereas other trees shed their leaves and appeared like dead, gnarled things springing from the ground, evergreens were a symbol of life.

Many pagan cultures adorned their homes with evergreen boughs to keep evil spirits at bay, a common element among many pagan winter solstice rituals. In fact, according to the Society of Ethnobiology, the period now known as the 12 Days of Christmas were considered by pagan cultures to be the darkest and most dangerous days of the year.

Pagan myths say that during those 12 days, Odin and the Wild Hunt would ride through the sky, concealed by dark storm clouds, ready to abduct anyone unfortunate enough to have failed to find a hiding place.

Fearful believers would cover their homes in aromatic plants like pine and fir, smudging the walls with resin as a protective measure.

The importance of these protective trees was detailed in the writings of 12th-century German scientist and Catholic saint, Hildegard von Bingen: “Wherever the fir wood stands, the spirits of the air hate it, and shun it. Enchantments and magic spells have less power to effect things there, than they do in other places.” 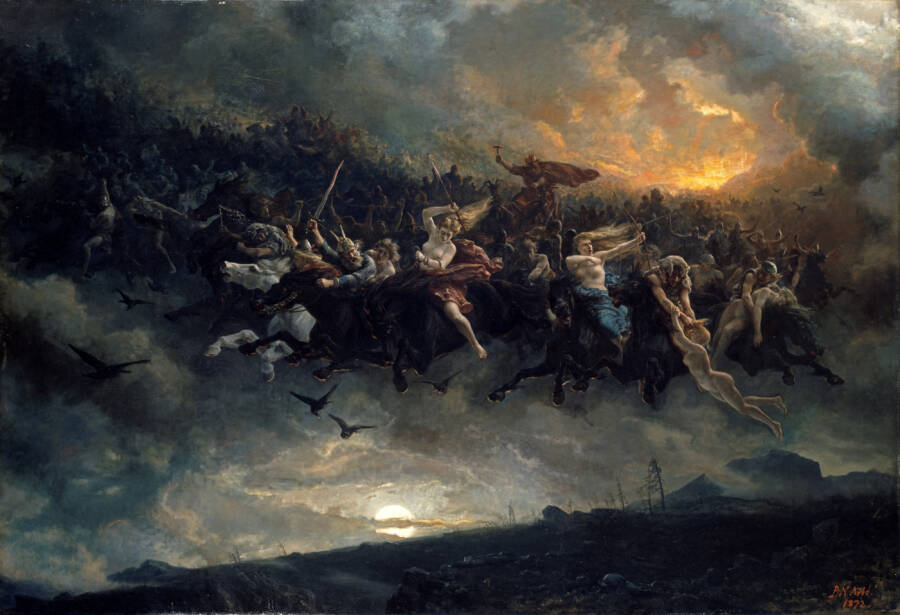 There are variations of this story in many ancient cultures, including ancient Greek myths that speak of the Kallikantzaroi, a race of elves who spend the year attempting to cut down the World Tree and surface only during the 12 Days.

Similar beliefs can be found in the cultures of ancient Rome and Egypt, where greenery served an equally protective and spiritual role. And despite Christianity’s eventual overtaking of many pagan religions, elements of the tradition lingered on — and eventually became the Christmas tree as we now know it.

Although many countries have declared themselves the home of the first Christmas tree — Latvia and Estonia each claimed a guild called the House of the Black Heads carried a tree through town, decorated it, and burned it down — historians have said it’s much more likely that the first Christmas tree was in 16th-century Alsace in modern day France. 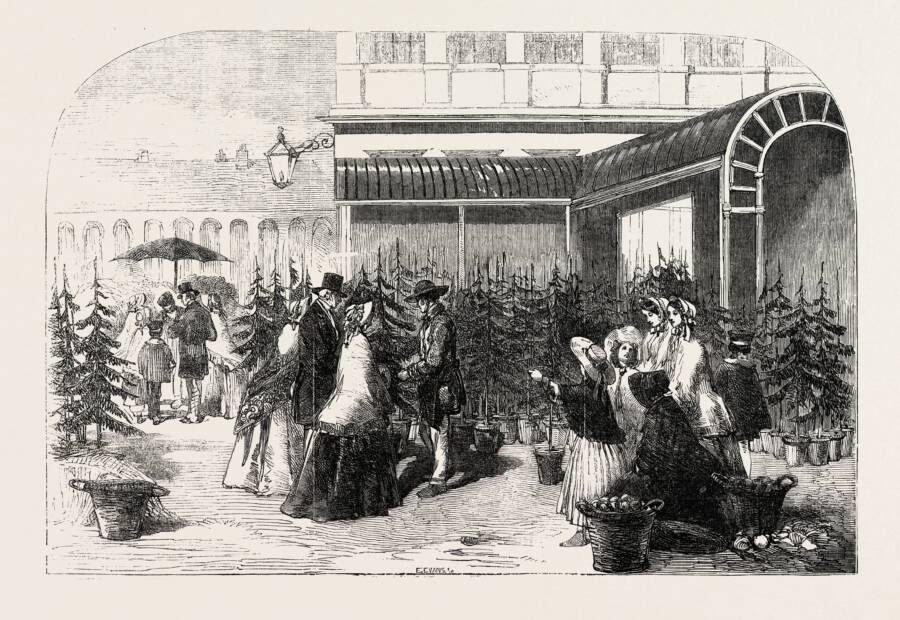 At the time, however, Alsace was a part of German territory, and so the tradition technically belongs to the Germans.

Historical records show that a Christmas tree was indeed put up in the Strasbourg Cathedral in 1539 and the tradition quickly became popular throughout the region.

In fact, the tradition became so popular that laws had to be put in place banning the cutting of pine branches, and, according to Time, limiting each house to one tree.

The Protestant reformer Martin Luther is also commonly credited with being the first person to put lights on a Christmas tree, decorating it with candles after a long walk at night through a forest where he became entranced by the stars above him.

As Germans settled in other countries across Europe, they brought the tradition with them and by the 18th century, Christmas trees were a common staple in European countries.

It was around this time, in the mid-18th century, that George III’s wife, Queen Charlotte, supposedly brought the first Christmas tree into the royal palace, but it wasn’t until 1848 that the common image of a decorated Christmas tree with presents beneath it took hold.

That year, the Illustrated London News published an engraving of Queen Victoria and Prince Albert gathered around a tree with their children eyeing the presents beneath its branches. 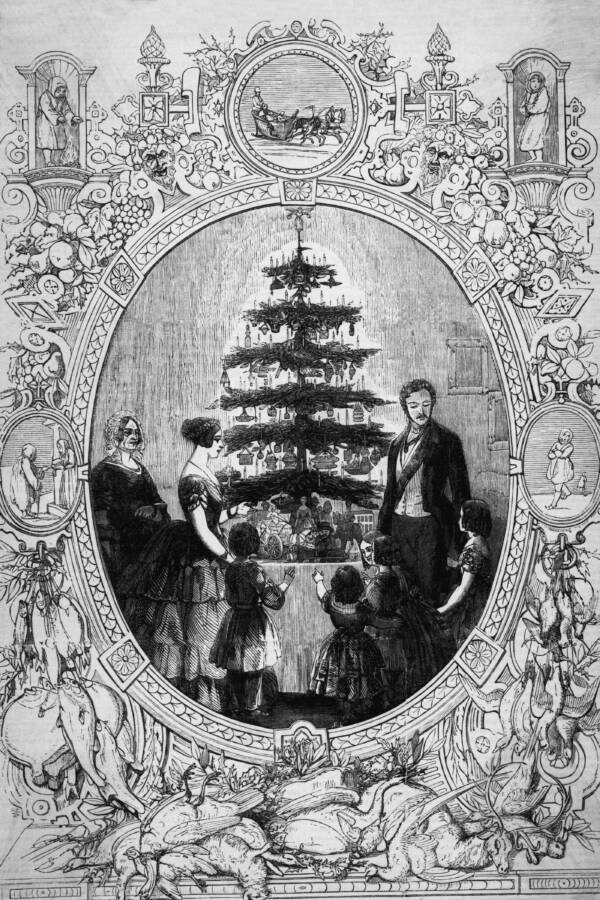 That image was later reprinted by an American women’s magazine called Godey’s Lady’s Book with the title, “The Christmas Tree.”

Christmas trees had been referenced in American history since the late 18th and early 19th centuries, as Germans likely brought the tradition with them to America as well, but following the publication in Godey’s, Christmas trees grew in popularity in America.

But they weren’t always so readily accepted.

Christmas Trees In The United States

The Christmas tree made its way to the States following German immigration patterns, but unfortunately wasn’t well received largely due to entrenched cultural attitudes and a fear that a leisurely celebration such as Christmas would reduce labor productivity.

In fact, in 1621 Puritan governor William Bradford wrote that he tried to stamp out the “pagan mockery” of the Christmas tree, arguing that it promoted excess and lacked any origin in Scripture. 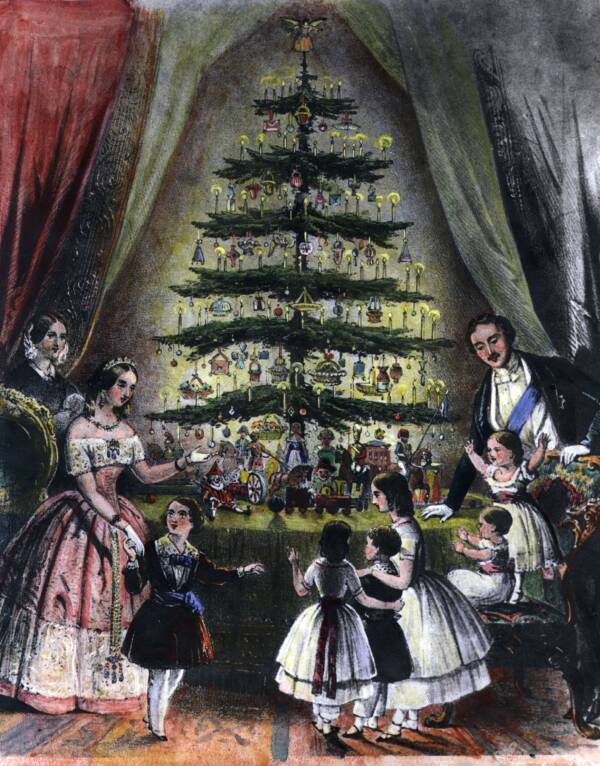 A few years later, the Puritans of New England made observation of the holiday illegal, and if anyone was caught celebrating they would have to pay a fine. Even after the ban was repealed, New Englanders sustained their disdain for the Christmas tree and the holiday, to the point that carolers would be prosecuted for “disturbing the peace.”

This vitriol for the Christmas tree continued well into the 19th century, but popular icons, technological innovations, and a desire to unite the U.S. would all play a role in tempering it.

Then, the Godey’sillustration was published, with some editing to remove the Queen’s crown and other references to the royals so that it would better resonate with American workers.

It was an evident success, and then in the late 19th century, the advent of Thomas Edison’s long-lasting carbon filament lamps brought about Christmas lights, replacing Luther’s 16th-century fire hazard.

Electricity lobbyists led the push for a “National Christmas Tree” at the White House to show off the wonders of electricity, decorating a 60-foot-tall balsam fir tree with 2,500 light bulbs. 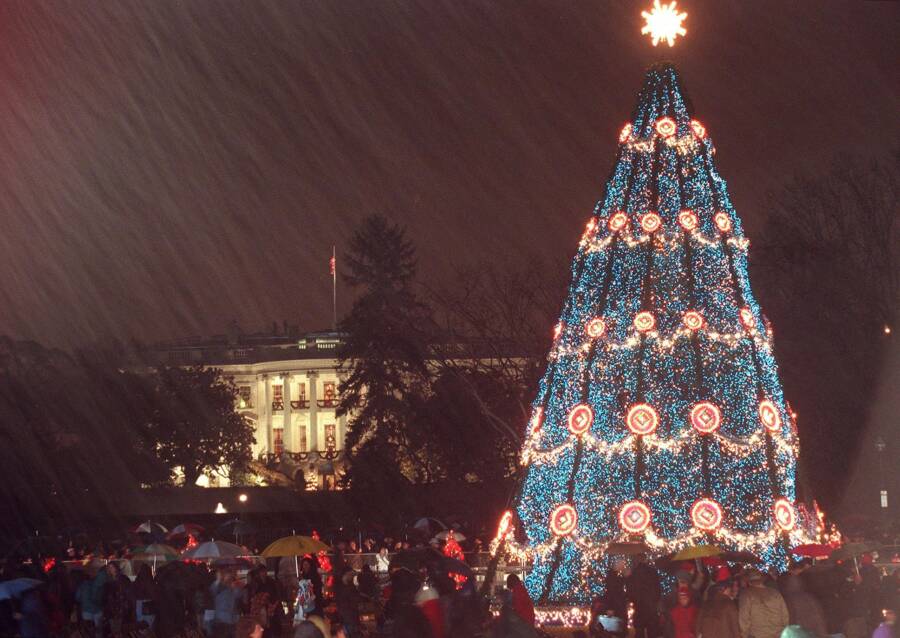 Not long after, a 20-foot-tall Christmas tree was displayed at the still-under-construction Rockefeller Center, and soon enough, Christmas trees began to appear in town squares across the country.

Now, over 25 million real Christmas trees are sold per year in the United States, representing around $1.3 billion in annual sales — and that’s not to account for the families who put an artificial tree on display each year in their homes.

After this look at Christmas tree history, read up on 15 bizarre Santa Claus legends from around the world. Then, see where your Christmas decorations come from in this look inside the Chinese factories responsible for making them.