From motorcycle adventurer to Nazi hunter to surfer, Mad Jack Churchill lived quite the life.

Wikimedia CommonsJack Churchill at his desk, where he worked for the Army after his retirement from active duty.

Lieutenant Colonel John “Mad Jack” Churchill had a motto: “Any officer who goes into action without his sword is improperly dressed.”

He was referring, of course, to the basket-hilted Scottish broadsword that he armed himself with during battle. And no, Mad Jack Churchill was not a Viking warrior or a medieval knight. He was a British Army officer who fought during World War II.

That’s right, while everyone else was firing rifles and loading their tanks, Jack Churchill preferred some good old fashioned hand to hand combat. In addition to his sword, he occasionally used a longbow.

Churchill’s life was badass from the beginning. He was born in 1906 in Hong Kong. His father Alec was appointed the Director of Public Works in Hong Kong, and the family followed him to Asia, where they lived until 1917.

During this time, Churchill got his first taste of adventure. He would often explore the rural areas around the city. When his family moved back to their native England, the desire to explore continued.

Churchill entered the Royal Military College in Sandhurst, and graduated in 1926, moving to Burma with the Manchester Regiment. While in Burma, he rode his motorcycle up and down almost the entire country, exploring what it had to offer. He also learned to play the bagpipes while there. 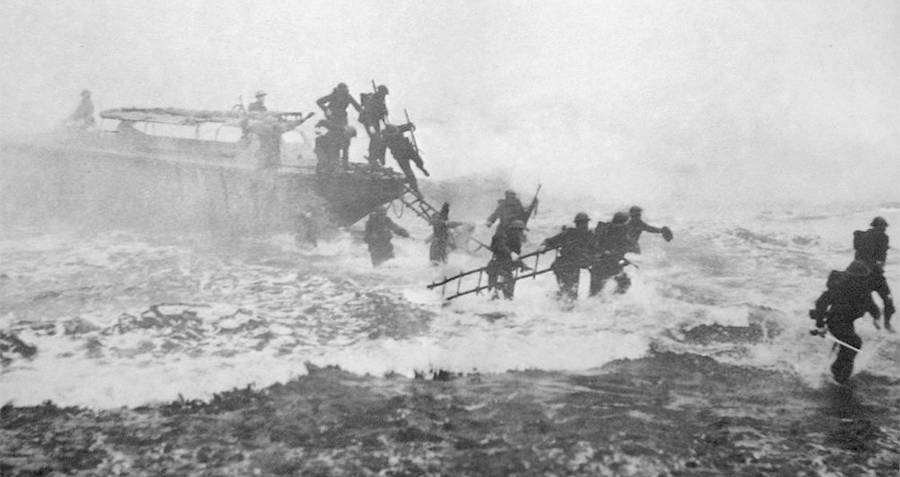 In 1936, his sense of adventure became too great for the Army, and he left, moving to Nairobi, Kenya. While in Nairobi, he worked as a newspaper editor and a male model. He also put his archery and bagpipe skills to work during his time as an actor. He appeared in two films, The Thief of Bagdad and A Yank At Oxford, before moving on from the film industry.

He did not, however, give up his talents, as he competed in the military piping competition — taking second place — and the World Archery Championships in Oslo, Norway.

Churchill’s adventurous spirit was put on hold in 1939 at the dawn of World War II. After Germany invaded Poland, he resumed his post in the British Army, this time as part of the British Expeditionary Force to France.

During one of his force’s raids, he ambushed a German patrolman, shooting him with a barbed arrow. His shot earned him the title of the only British soldier to have felled an enemy with a longbow during the war.

After serving in the British Expeditionary Force, Churchill volunteered for the Commandos, a special forces division dedicated to carrying out raids against German-occupied areas of Europe. As a commando, Churchill gained notoriety for charging into battle, playing the bagpipes, and throwing grenades.

Churchill led the Commandos across Europe, from Norway to Italy, to Yugoslavia, all the while armed with his longbow, bagpipes, and a Scottish broadsword. At one point as he was marching through Sicily, with only his sword, he and a Corporal managed to capture 42 German soldiers.

For his service with the division, Mad Jack Churchill was awarded the Military Cross and Bar.

At one point, during a commando raid, Churchill’s team was ambushed. The Germans launched a mortar shell that killed or wounded the entire team. Churchill, miraculously, managed to escape death, as he was a little ways away from his camp playing the bagpipes, though he was captured by the Germans and sent to the Sachsenhausen concentration camp.

However, it seemed there was no concentration camp strong enough to hold a man like Jack Churchill. Just days after being captured, Churchill and another army officer crawled under the wire fence and through an abandoned drain to escape the camp. They even managed to make it almost all the way to the Baltic coast on foot, before being picked up near the city of Rostock.

Though they’d been recaptured, they were soon released, after a sympathetic army unit called off the SS guards. After his release, Churchill walked 93 miles to Verona, Italy, to meet back up with the American troops.

Despite being captured twice, Churchill remained in the army. In 1944, just months after being reunited with the American forces, he was sent to Burma, to participate in the land battles against Japan. However, by the time he had arrived, the war was ending, as Nagasaki and Hiroshima had just been bombed.

According to fellow soldiers, Churchill was disappointed in the sudden end to the war, and exclaimed: “If it wasn’t for those damn Yanks, we could have kept the war going another 10 years!”

So, in order to continue his adventurer/explorer lifestyle, Churchill got qualified as a parachutist, and joined the Highland Light Infantry, moving to British-occupied Palestine to train with the Army against the Arab forces. While there, he coordinated rescue efforts and evacuation efforts for civilians and Jewish citizens who were under attack.

After his time in active duty military, he moved to Australia, where he became an instructor for the military school there. It was also where he took up surfing. He studied the techniques and upon returning to England, he became the first person to ride the River Severn’s tidal bore.

Eventually, even Jack Churchill realized it was time to slow down, and in 1959 at the age of 53 he officially retired from the Army. However, he remained as eccentric as he always had.

Every time he would take the train from the city to his home, he would toss his briefcase out the window. When questioned why he would do such a thing, he explained to the conductors that he was simply throwing his briefcase into his own backyard, so he wouldn’t have to carry it home from the station.

Aside from throwing personal belongings from moving train cars, Jack Churchill spent his retirement years sailing the Thames and playing with radio-controlled model warships. In 1996, at the age of 89, he passed away, leaving behind his legacy as one of the most eccentric badasses of all time.

After learning about Mad Jack Churchill, read about Peter Freuchen, the real most interesting man in the world. Then, check out these badass Revolutionary War women. Finally, read the story of Desmond Doss, the real-life inspiration for the movie Hacksaw Ridge.