An unassuming tan 1968 Volkswagen Beetle, Ted Bundy's car played a pivotal role in his murder spree — and it may have been one of his best weapons.

Ted Bundy’s car helped him commit gruesome murders. He used it to transport victims, move from state to state, and store weapons.

But the tan 1968 Volkswagen Beetle was perhaps his deadliest weapon of all. When police pulled Bundy over in 1975, they got a first look at how he had transformed the car into a murder machine. While the full extent of his crimes had yet to be discovered, the truth would soon be revealed.

This is the story of Ted Bundy’s car, a vehicle almost as infamous as him. 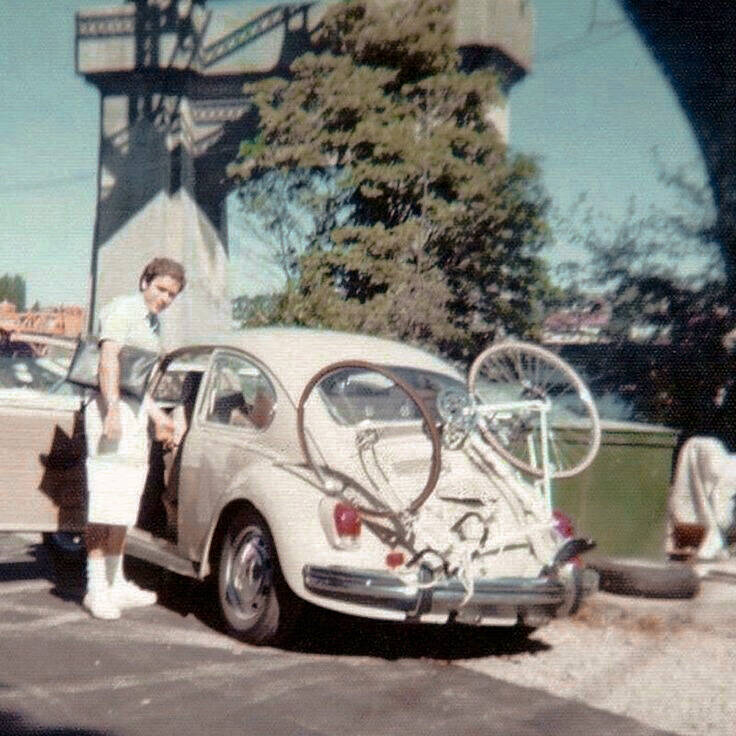 Pinterest A rare photo of Ted Bundy with his Beetle.

Ted Bundy’s car played a crucial role in his murders from almost the very beginning. After breaking into apartments in Seattle — where he killed his first known victim Lynda Ann Healy — he soon switched up his tactics.

Using his car as a trap, Bundy would often wear a sling or walk on crutches while luring potential victims toward his vehicle. He’d ask unassuming women for help with a simple task, like putting books in his trunk. And when they obliged, he’d bludgeon them and force them into his Beetle.

Over time, Bundy essentially transformed the car into an accomplice. He removed the passenger seat so he could easily lay semiconscious women on the car floor. On the off chance they woke up, Bundy also took out the inside door handle so that they wouldn’t be able to escape.

The victims would usually be handcuffed to the car frame to further prevent them from getting up and alerting any passing cars to their distress.

Bundy also stuffed the trunk with tools like handcuffs, rope, and an ice pick.

It wasn’t long before witnesses started describing a brown-haired man named “Ted” who drove a Volkswagen Beetle. Bundy’s former colleague, Ann Rule, thought that this “Ted” sounded suspiciously similar to the Ted she knew. However, since Bundy had always asked for rides home, Rule believed that he didn’t have a car. She didn’t learn the truth until later.

By then, it was much too late. At the end of the summer of 1974, Bundy had already murdered multiple women in Washington and Oregon. In August, he took his Beetle and relocated to Utah, where he soon started killing again.

How A Simple Traffic Stop Caught A Killer 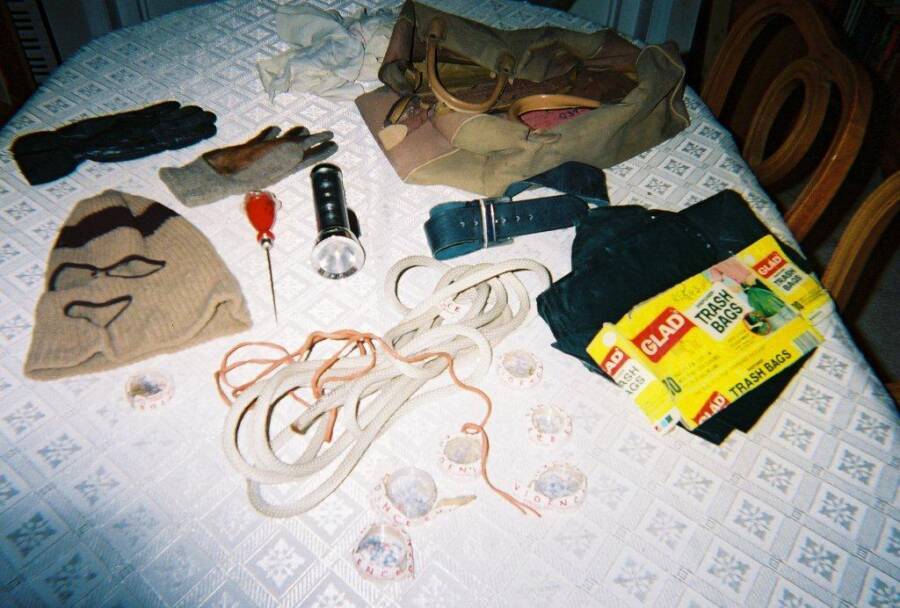 In Utah, Ted Bundy’s car allowed him to continue to kill. But he wasn’t always successful. Eighteen-year-old Carol DaRonch narrowly escaped from the Beetle after Bundy posed as a policeman and attempted to kidnap her. A rare Bundy survivor, DaRonch would later become the first to identify him.

But the dominoes that led to Bundy’s arrest and execution wouldn’t start to fall until August 15, 1975. Then, police pulled Bundy over in Granger, Utah for driving without his headlights on and for ignoring two stop signs.

Something about the charming man in the Volkswagen disturbed the officers. Upon noticing the removed passenger seat, they asked to see the rest of the vehicle. Bundy agreed — and watched as they found an ice pick, a ski mask, handcuffs, and other suspicious items in his trunk.

At first, the police took him as just a burglar. Bundy was briefly arrested, after which he posted bail and walked free. Seemingly aware that it had been a close call, he cleaned out his car and sold it to an unassuming buyer.

But despite the new ownership, Ted Bundy’s car was inextricably tied to him. He did not clean it thoroughly enough to get rid of all the evidence. And when DaRonch, one of Bundy’s would-be victims, picked him out of a line-up in October 1975, police tracked down his Volkswagen.

Inside, they found hair from three of Bundy’s victims as well as bloodstains. Before long, authorities realized that Ted Bundy was no run-of-the-mill thief. He was a merciless serial killer with victims in multiple states.

Where Is Ted Bundy’s Car Today? 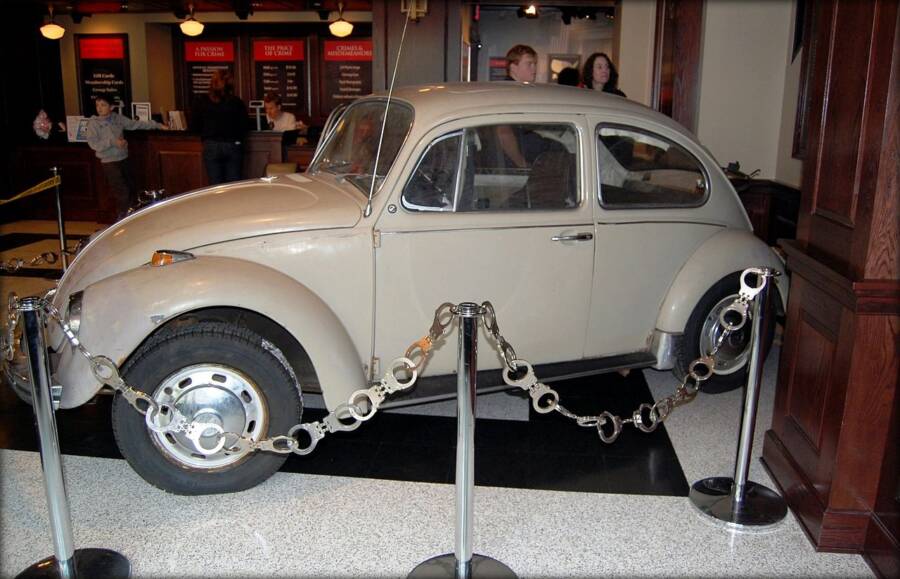 Though Ted Bundy was subsequently arrested for attempted kidnapping and eventually charged with first-degree murder, he managed to escape from prison — twice. The second time in 1977, he made it all the way to Florida.

Bundy continued his murder spree there, viciously attacking co-eds in their sleep at Florida State University in January 1978. Though Ted Bundy’s car remained in the hands of police, he soon stole another vehicle while he was on the run: a second Volkswagen Beetle, this one in orange.

But Bundy’s murder spree came to an end behind the wheel of that car.

In February 1978, police pulled him over for a traffic violation in Pensacola, Florida. Authorities soon realized that the car had been stolen, and the thief was none other than Ted Bundy. This time, he wouldn’t be able to escape from prison again. After years of claiming innocence, Bundy eventually confessed to 30 murders and was executed on January 24, 1989.

So — what happened to Ted Bundy’s car? The tan 1968 Volkswagen Beetle that had once helped him kidnap and kill women?

At some point after Bundy’s arrest in Utah, a Salt Lake Sheriff’s Deputy named Lonnie Anderson snatched up the car at a police auction for $925. Twenty years later, he decided to sell the vehicle for $25,000.

Though the sale of Ted Bundy’s car repulsed his victims’ families — one called it “sadistic” — the car has since become a popular exhibit at crime museums. Today, it’s on display at the Alcatraz East Crime Museum in Pigeon Forge, Tennessee. Its presence there remains controversial.

After learning about Ted Bundy’s car, discover the story of Ted Bundy’s daughter. Then, read about Carole Ann Boone, the woman who married him.