After leaving the film industry twice due to bigotry, Anna May Wong became an advocate for the rights of Chinese American citizens.

Anna May Wong was Old Hollywood’s go-to Asian American actress. She was the first Chinese American lead in an America television series and appeared in 50 films both domestically and abroad, including the industry’s first all-color, full-length feature.

But despite her impressive resume, the industry’s rampant racism stunted her career. 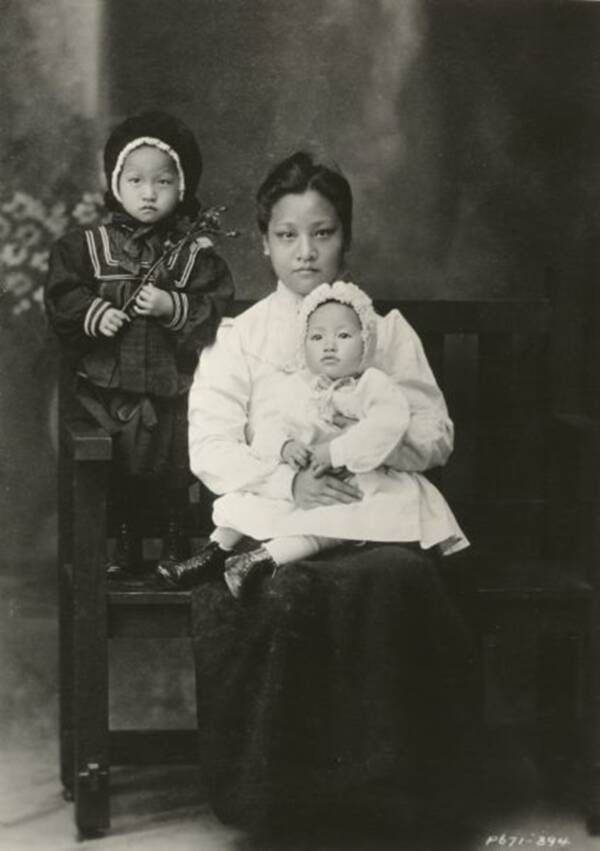 Wikimedia CommonsAnna May Wong as an infant on her mother’s lap with her older sister to their right.

Anna May Wong was born Wong Liu Tsong in Los Angeles on January 3, 1905. Her grandparents had emigrated from China in the 1850s.

Wong’s father, Sam Sing, was born in California where the family had settled during the height of the Gold Rush. Her mother, Gon Toy Lee, was also a native Californian. Together, the couple opened a laundromat on North Figueroa Street in Los Angeles.

Anna May Wong was the second of seven children. Her birth name, Wong Liu Tsong, meant “Frosted Yellow Willows” but, like many immigrant families hoping to assimilate into their new home, she was given the English name “Anna May.” 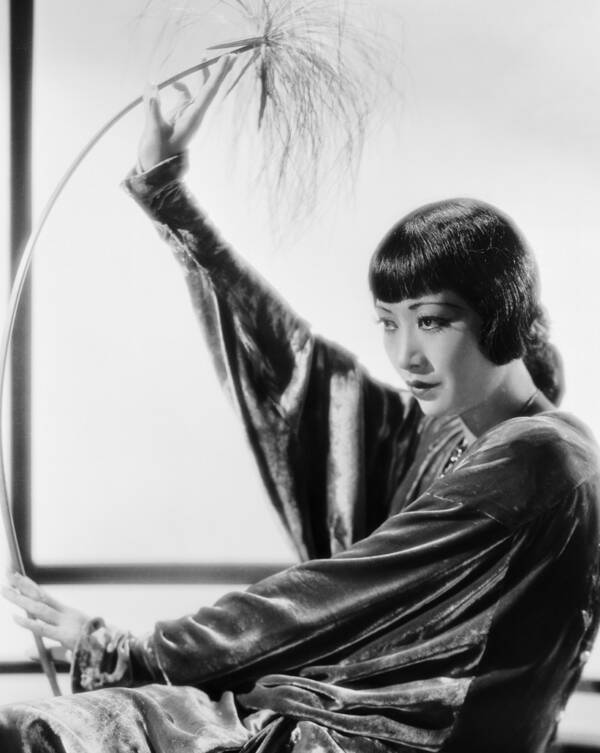 Otto Dyar/John Kobal Foundation/Getty ImagesGrowing up in Los Angeles, Anna May Wong had always wanted to star in films.

As a child, Wong worked at her family’s laundromat and learned to speak Cantonese. While her family lived in a diverse neighborhood, Wong and her older sister still endured racism from their classmates.

Xenophobia permeated the West as Asian immigrants arrived in the States looking for work on the transcontinental railroad. European American laborers referred to this as the “yellow peril” and these anti-Chinese sentiments were reinforced by policies like the Chinese Exclusion Act of 1882, which limited the immigration of Chinese citizens to the continental United States.

As a result of these attitudes, Wong and her siblings were bullied so severely as schoolchildren that their parents moved them to the Chinese Mission School in L.A.’s Chinatown. 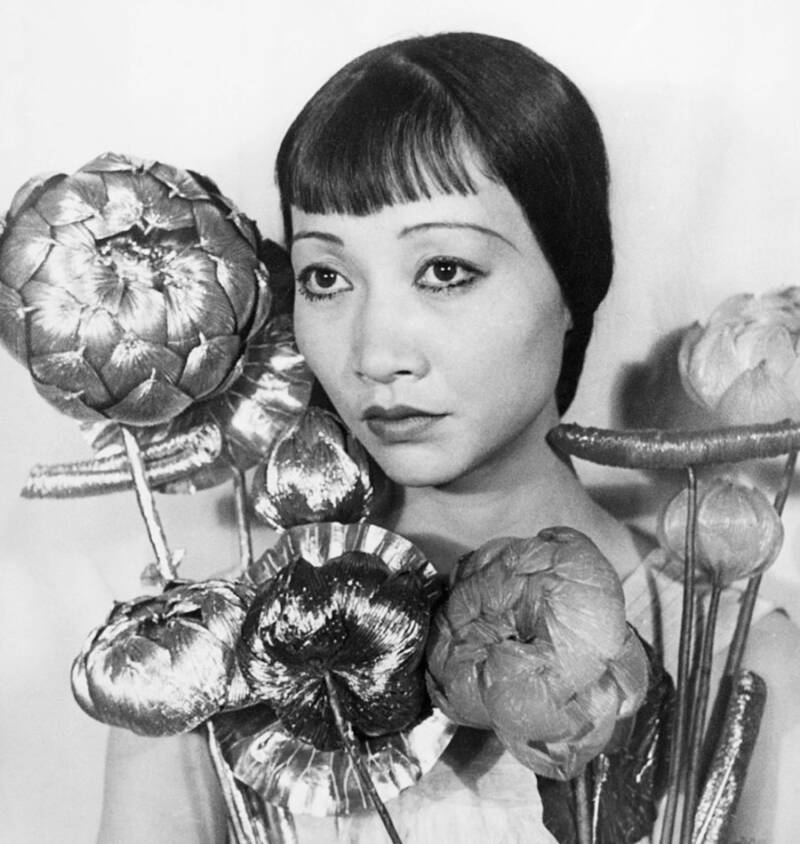 Like many who grew up in Los Angeles, Wong became infatuated with filmmaking, a career prospect on which her parents weren’t keen.

“The good Chinese family does not want a son to be a soldier because it’s so dangerous, or a daughter to be an actress…in this time, actresses were equated at best with courtesans and more often with prostitutes,” Wong’s biographer, Graham Russell Gao Hodges, explained. 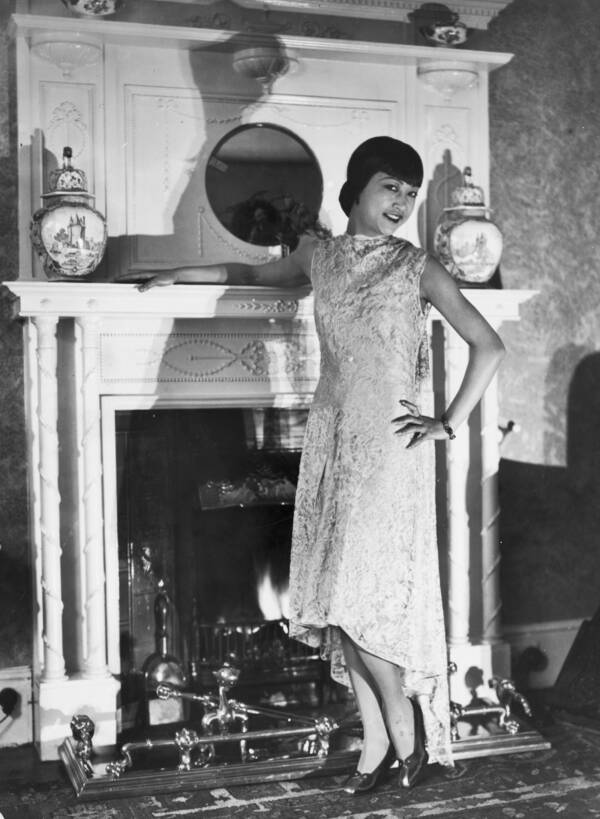 William Davis/General Photographic Agency/Getty ImagesAnna May Wong in her London flat after she moved to Europe.

Nevertheless, the aspiring actress spent her free time visiting movie sets and saving her lunch money to go to the cinema. She combined her Chinese and English names to come up with her stage name: Anna May Wong.

At 14, Anna May Wong was recruited by acting agent James Wang to play an extra in the film Red Lantern. It was Wong’s first chance to be onscreen. 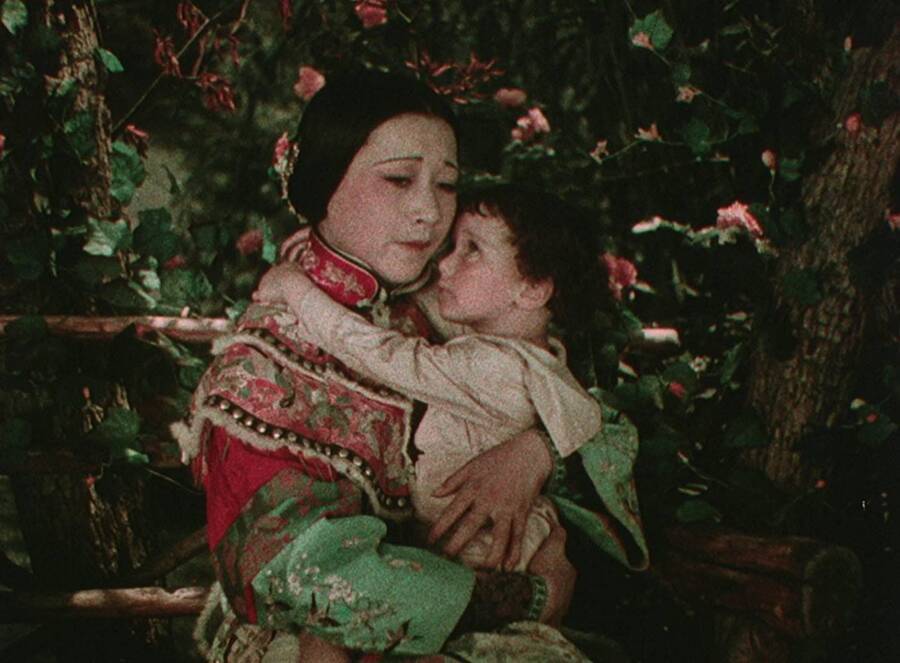 Metro Pictures CorporationA still of Wong as “Lotus Flower” in Toll of the Sea.

Anna May Wong landed more roles as an extra and left home at the age of 17 to audition for more work, supporting herself by modeling. She finally got her big break when she was cast as the lead role in 1922’s The Toll of The Sea.

In the film, Wong plays a Chinese woman named Lotus Flower who embarks on an intense love affair with a white American (played by Kenneth Harlan) who she saved after he washed ashore on the beach. They have a child together and he promises to bring her back to America with him, but he abandons her, taking a white wife instead and their son back home with him to America.

Lotus Flower ends her life by drowning herself in the sea.

The Toll of the Sea was the first full-length, Technicolor, narrative feature produced in Hollywood.

The Toll of The Sea made a huge splash in Hollywood as the first all-color, full-length, narrative feature. The film was also unique in that it included an Asian American actress in the lead role. At the time, whitewashing, or employing white actors to play non-white characters, was common practice.

The film went on to become a critical and commercial success, but instead of going on to star in more lead roles, Wong found herself frequently cast in supporting ones — even for films that emphasized Eastern culture. 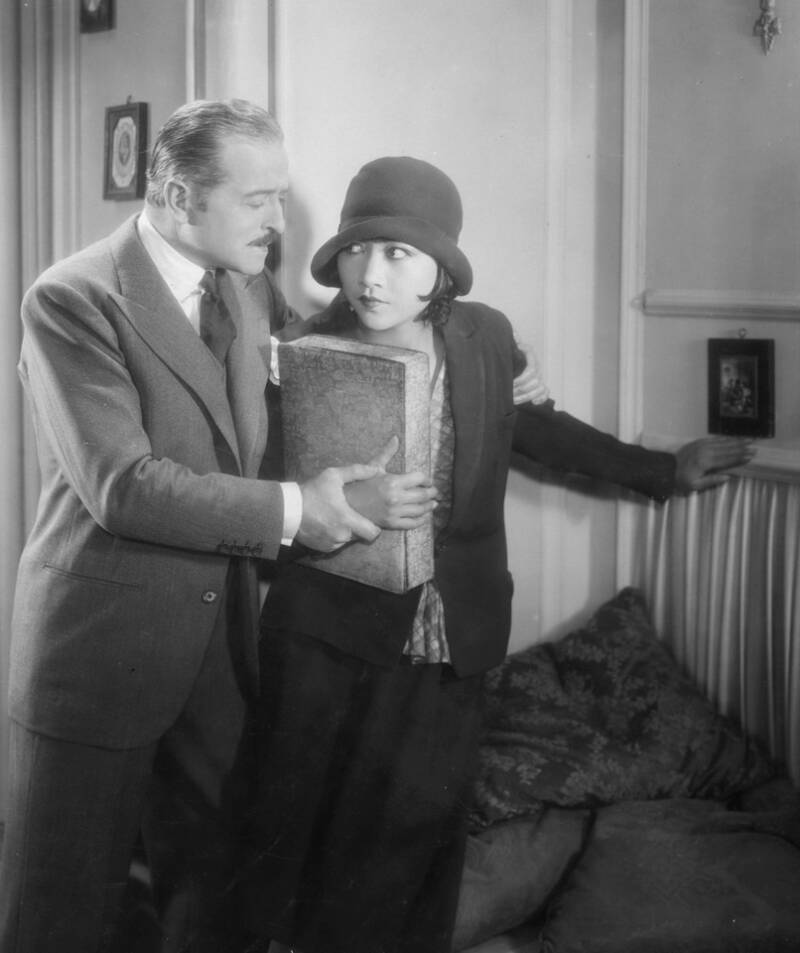 Furthermore, her characters were often caricatures of what white Americans thought Asian characters were supposed to be like. Wong was cast in roles that exotified her Asian ethnicity, like the “exotic untamed beauty” in The Thief of Bagdad, 1924, or the “villainous Dragon Lady” in Daughter Of The Dragon, 1931.

“Why is it that the screen Chinese is nearly always the villain?” she posed rhetorically during a 1933 interview. “And so crude a villain — murderous, treacherous, a snake in the grass. We are not like that. How could we be, with a civilization that is so many, many times older than that of the West.”

Tired of fighting for scrap parts in Hollywood, Anna May Wong left. 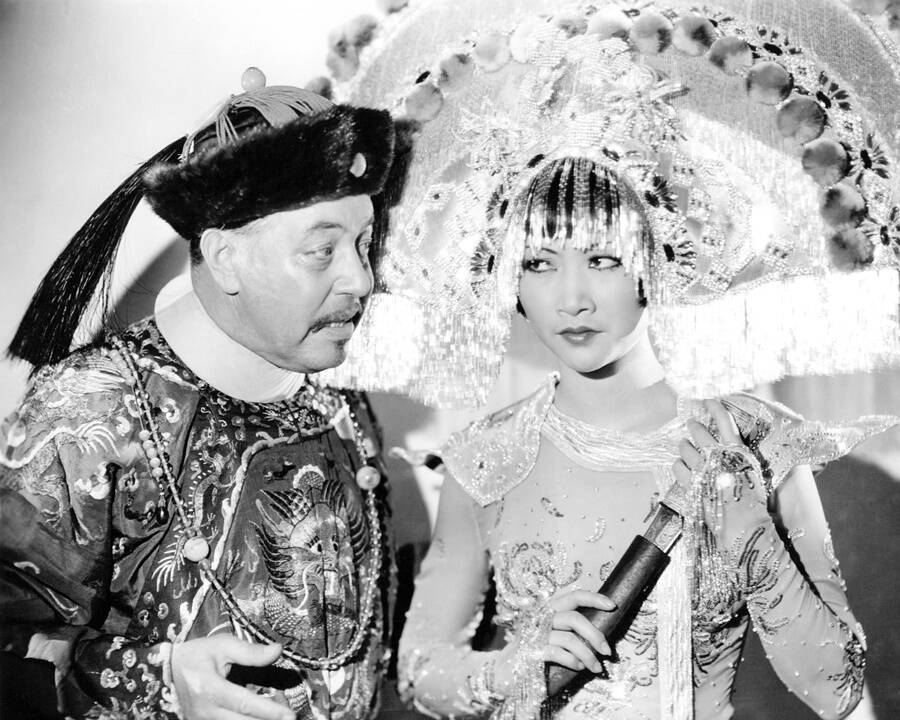 Anna May Wong settled into her new life in Europe fairly quickly during the early 1930s. She secured roles both on stage and on screen in England, France, and Germany, opposite lauded actors like Laurence Olivier and Marlene Dietrich.

In London, Wong mixed with British high society and was known as “one of the best-dressed women in Mayfair” due to her polished makeup and sophisticated wardrobe. Among her most notable European productions was E.A. Dupont’s 1929 melodrama Piccadilly in which she played a nightclub dishwasher named Shosho who becomes entangled in a love triangle with the club’s owner.

The film took Europe by storm. As Variety wrote of the feature, “‘Piccadilly’ is okay for a week or a day, this due to Miss [Gilda] Gray’s name, the story, and Anna May Wong, who outshines the star.” 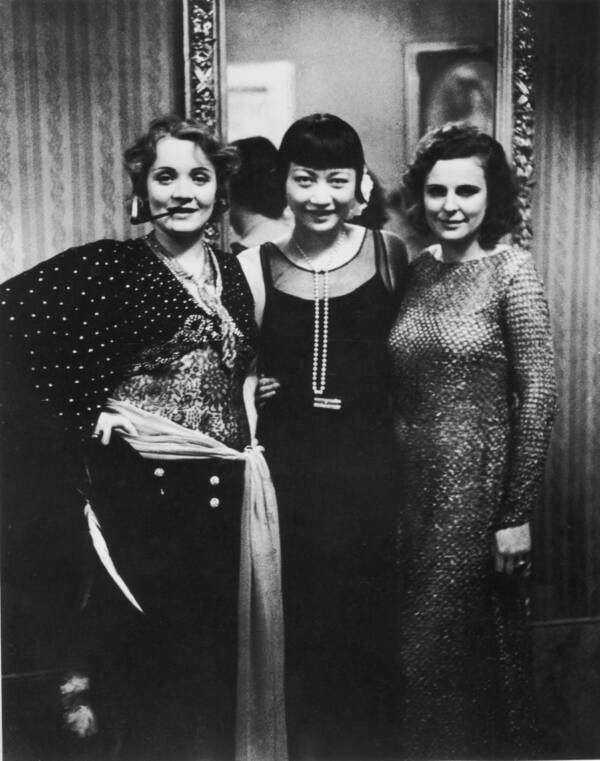 Anna May Wong also visited her extended family in China. She wrote a series of articles reflecting on her trip there for the New York Herald Tribune, candidly sharing her reality of being caught in-between two cultures.

“It’s a pretty sad situation to be rejected by Chinese because I’m ‘too American’ and by American producers because they prefer other races to act Chinese parts.”

Anna May Wong longed to be back home in Los Angeles with her family so she returned to the States. One of her first auditions after her return was for the lead role in The Good Earth, a Hollywood-produced Chinese drama adapted from the novel by Pearl S. Buck. 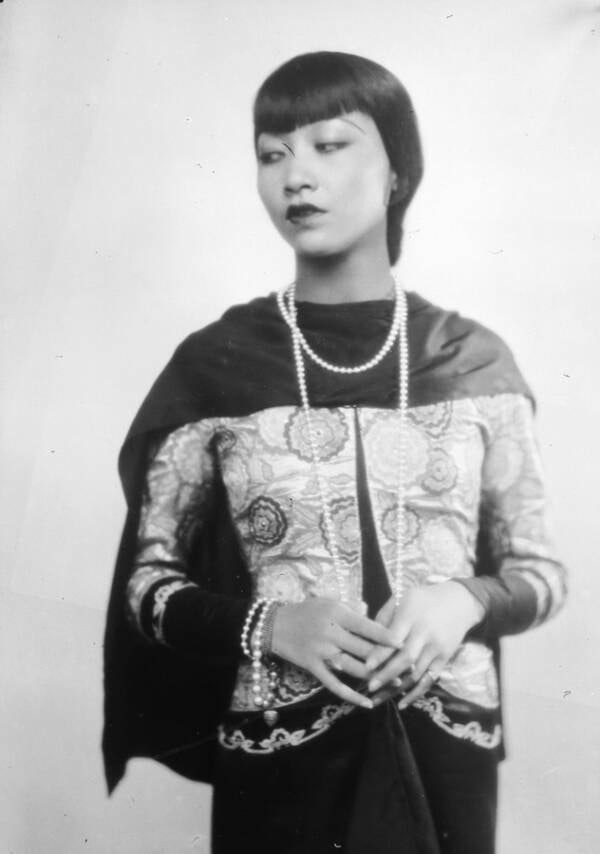 General Photographic Agency/Getty ImagesIn 1937, Anna May Wong was famously rejected for the lead role in a Chinese drama when the part was given to a white actress instead.

Despite her talent and hefty resume, Wong was passed over for the lead part of a Chinese farmer. Instead, the role was given to Luise Rainer, a white actress. The studio offered Wong the part of an exotic concubine named “Lotus” but the seasoned actress refused.

“You’re asking me – with Chinese blood – to do the only unsympathetic role in the picture featuring an all-American cast portraying Chinese characters,” Wong reportedly said. In spite of her achievements as an international film star, it was clear little had changed since her departure from America.

Anna May Wong opposite Marlene Dietrich in Shanghai Express.

Wong took a big step back from Hollywood in 1942 and poured her energy into advocacy. She became an active voice for the rights and needs of Asian Americans in the U.S. and worked with the United China Relief Organization, an American charity that raised money for humanitarian aid in China during World War II.

She briefly returned to show biz in 1951 to star in The Gallery of Madame Liu-Tsong, the first-ever U.S. television show with an Asian American lead.

Wong made her last onscreen appearance opposite Lana Turner in the 1960 feature Portrait in Black. She died the following year due to a heart attack at age 56 even though she was planning to continue her onscreen career. 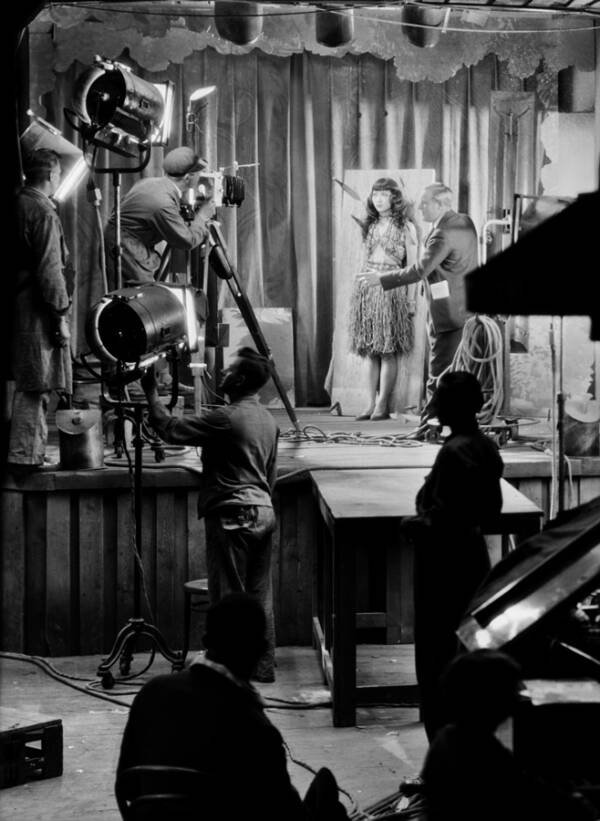 E.O. Hoppe/Hulton Archive/Getty ImagesWong on set while shooting in Germany.

In an obituary for the actress, Time magazine dubbed her “the screen’s foremost Oriental villainess,” proof that she could not shake this caricature of herself in Hollywood despite all her efforts.

“Anna May Wong represents not only a Chinese American woman trying to make it in film. She represents an entire generation,” explained Elaine Mae Woo, a Los Angeles-based filmmaker who spent years researching the actress’ life for a documentary. 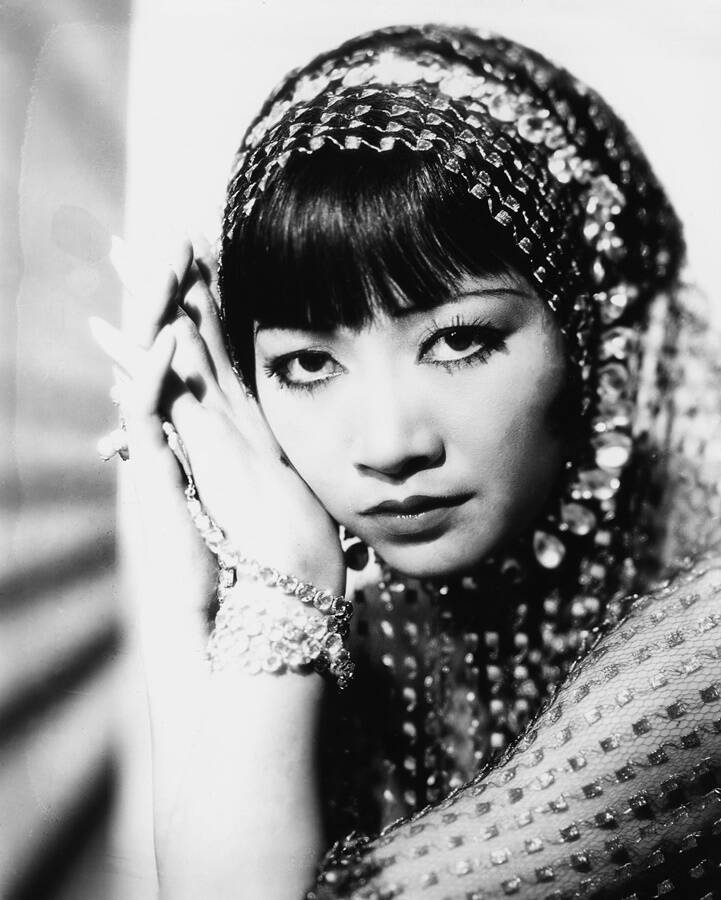 Silver Screen Collection/Getty ImagesIn spite of her critical and commercial success, Anna May Wong was unable to escape the racist stereotypes that hindered her career.

“She wasn’t trying to be the dragon lady or to make herself the biggest star ever. She wanted to learn a craft. That’s why she went on stage, did radio programs and television — it was a struggle for her, but she really wanted to be an artist more than anything.”

Anna May Wong’s ambitious career was battered repeatedly by racism yet she persisted. She blazed a trail for contemporary Asian American actors who still fight against the industry’s stereotyping and whitewashing nearly a century later.

After learning about Anna May Wong, explore the roaring twenties in 33 images that capture the Jazz Age in full swing. Then, read about the tragic tale of Clara Bow, the original flapper girl who took Hollywood by storm.