These heart-rending, life-affirming Anne Frank quotes and photos can teach us all about courage and reveal that hope is always possible.

Of all the books we’re made to read in high school, Anne Frank’s The Diary of a Young Girl is perhaps the one high schoolers are least equipped to fully appreciate. While it’s counterintuitive to think that the writings of a teenager wouldn’t resonate most with other teenagers, it’s only as adults that we can truly understand just how profound and wise-beyond-her-years Frank was.

Of course, this makes Frank’s story — and of her betrayal — all the more poignant and devastating: She had the poise and maturity of an adult, yet never actually got to reach adulthood.

Nevertheless, these 29 soul-stirring Anne Frank quotes can teach us all, no matter your age, a few essential things about life. 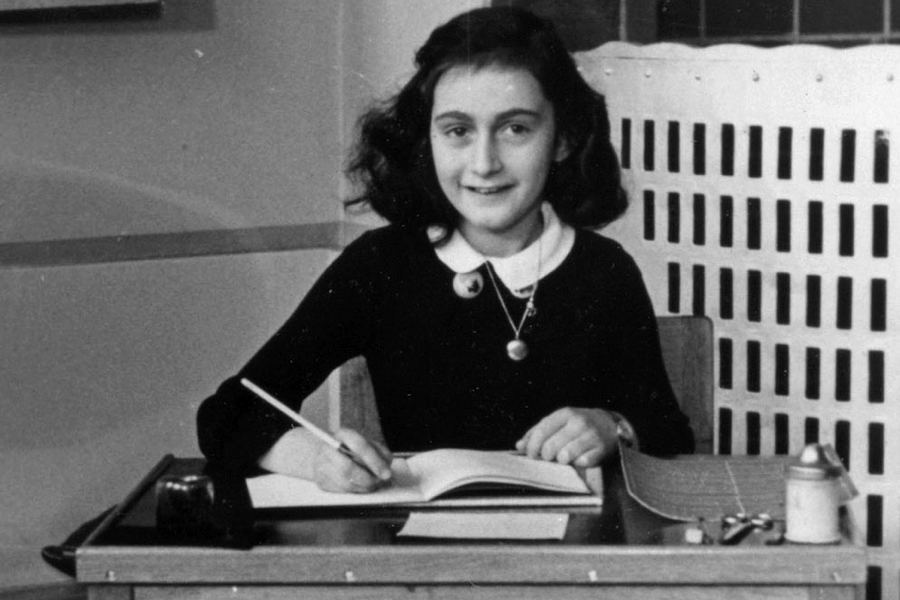 "How wonderful it is that nobody need wait a single moment before starting to improve the world."

Above: Anne Frank in 1940.Wikimedia Commons 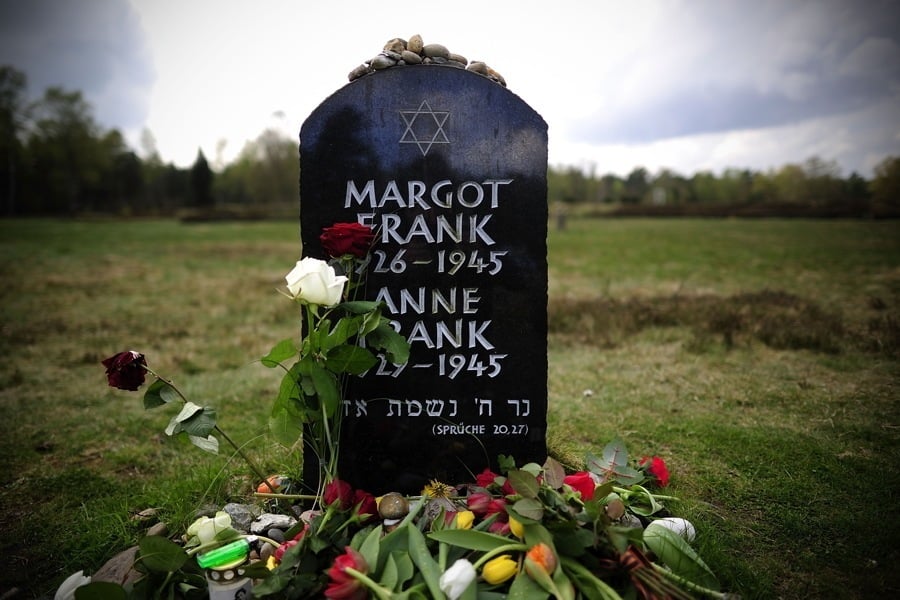 "In the long run, the sharpest weapon of all is a kind and gentle spirit."

Above: The gravestone of Anne Frank and her sister, Margot at the former site of the Bergen-Belsen concentration camp near Lohheide, Germany, where the two girls died in 1945.Alexander Koerner/Getty Images 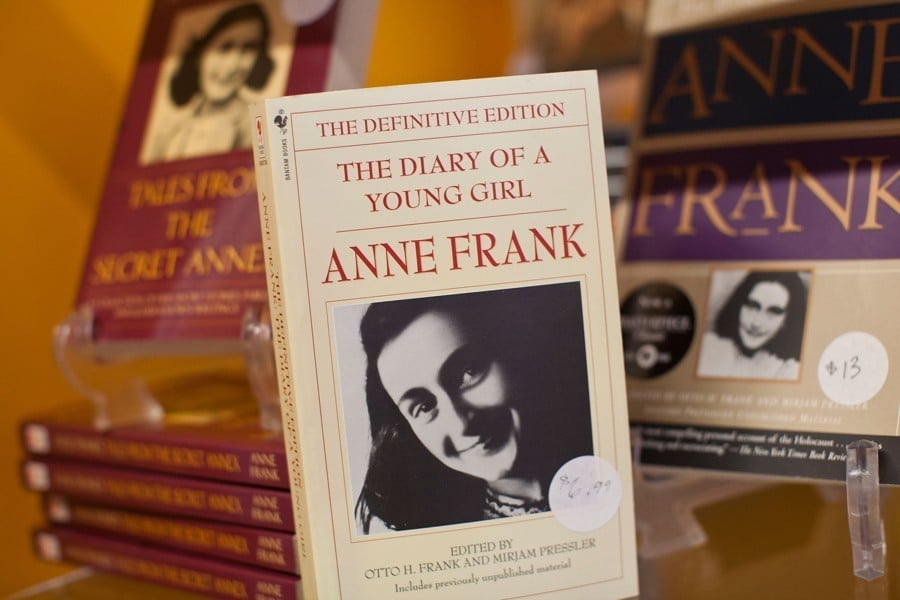 "Who would ever think that so much went on in the soul of a young girl."

Above: A copy of "The Diary of a Young Girl: Anne Frank" is displayed at the Anne Frank Center in New York City.Andrew Burton/Getty Images 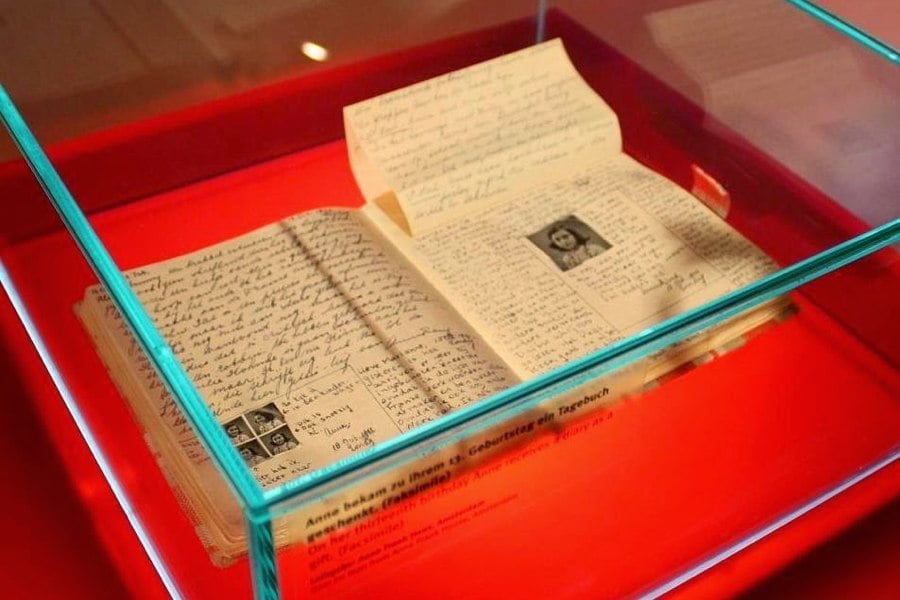 "Whoever is happy will make others happy too." 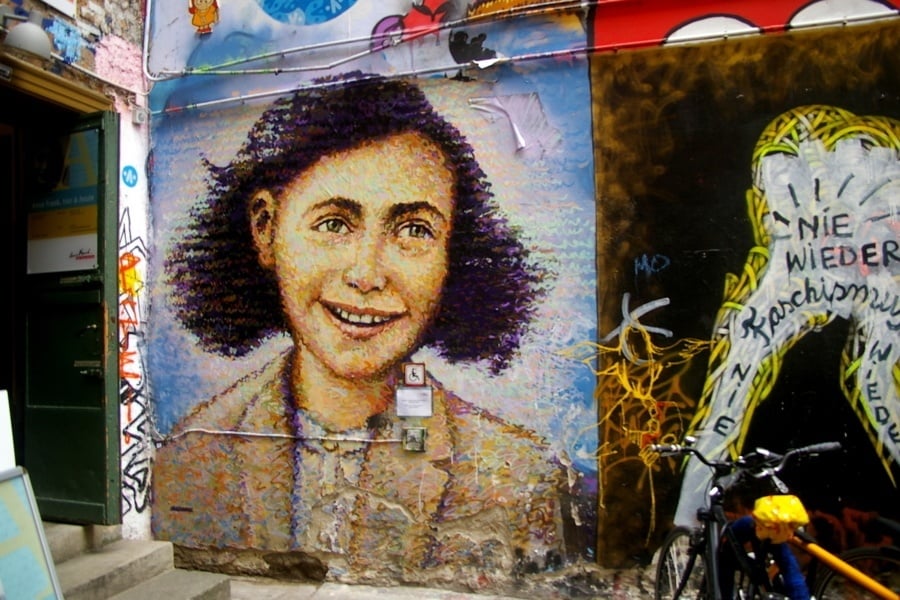 "I don't want to have lived in vain like most people. I want to be useful or bring enjoyment to all people, even those I've never met. I want to go on living even after my death!" 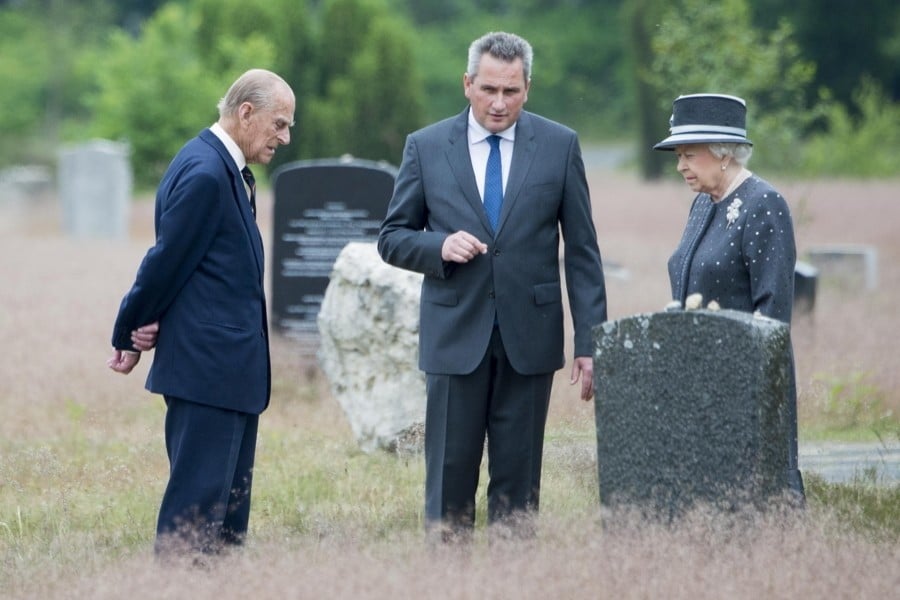 "Look at how a single candle can both defy and define the darkness." 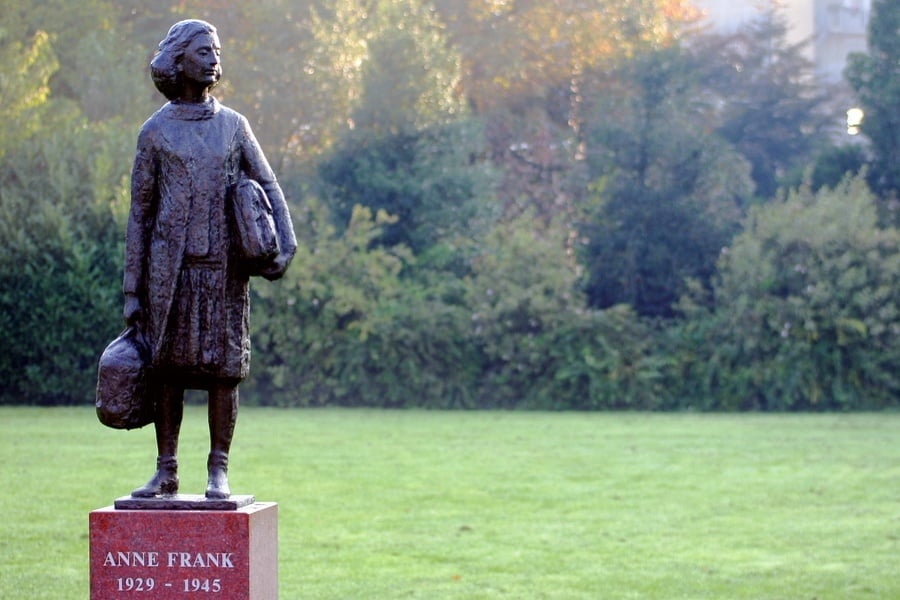 "As long as this exists, this sunshine and this cloudless sky, and as long as I can enjoy it, how can I be sad?" 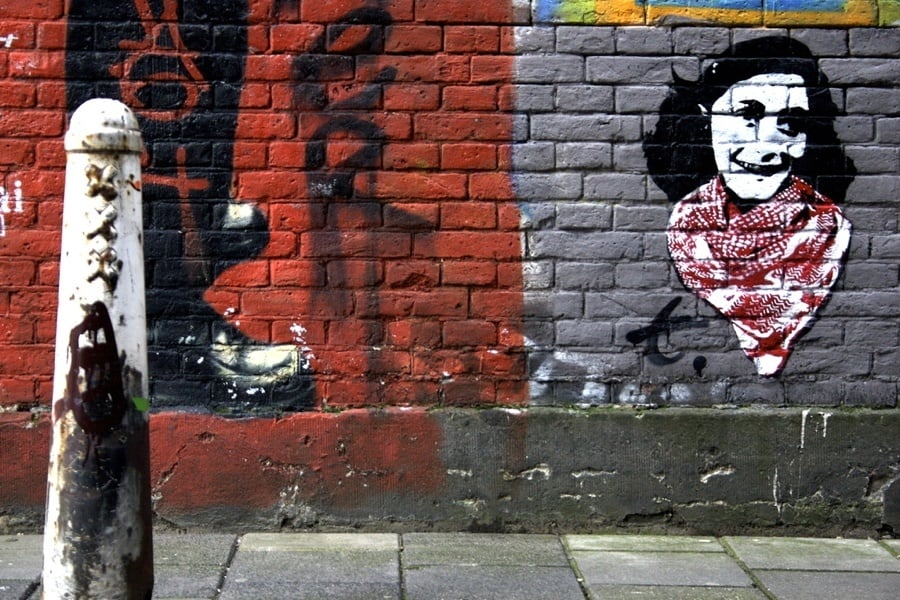 "I simply can't build my hopes on a foundation of confusion, misery, and death...and yet...I think this cruelty will end, and that peace and tranquility will return again." 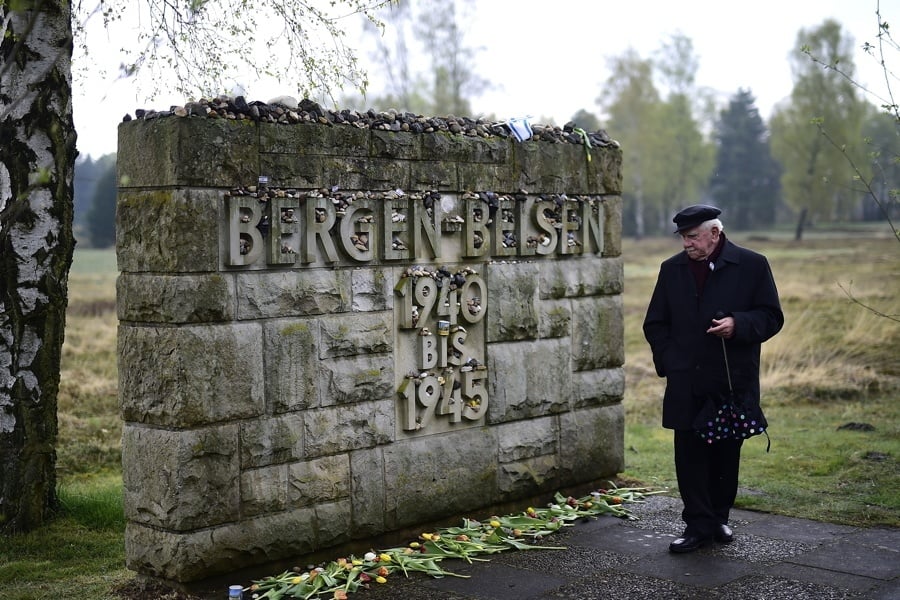 "He who has courage and faith will never perish in misery!"

Above: The memorial plaque at the former site of the Bergen-Belsen concentration camp.Alexander Koerner/Getty Images 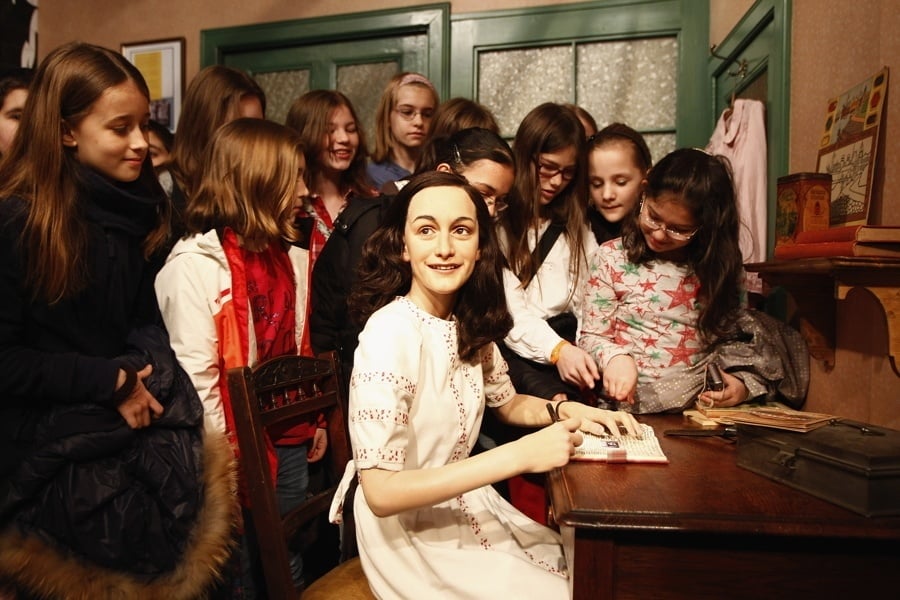 "I've found that there is always some beauty left -- in nature, sunshine, freedom, in yourself."

Above: Children gather around the wax figure of Anne Frank in the reconstruction of her hideout at Madame Tussauds in Berlin. Andreas Rentz/Getty Images 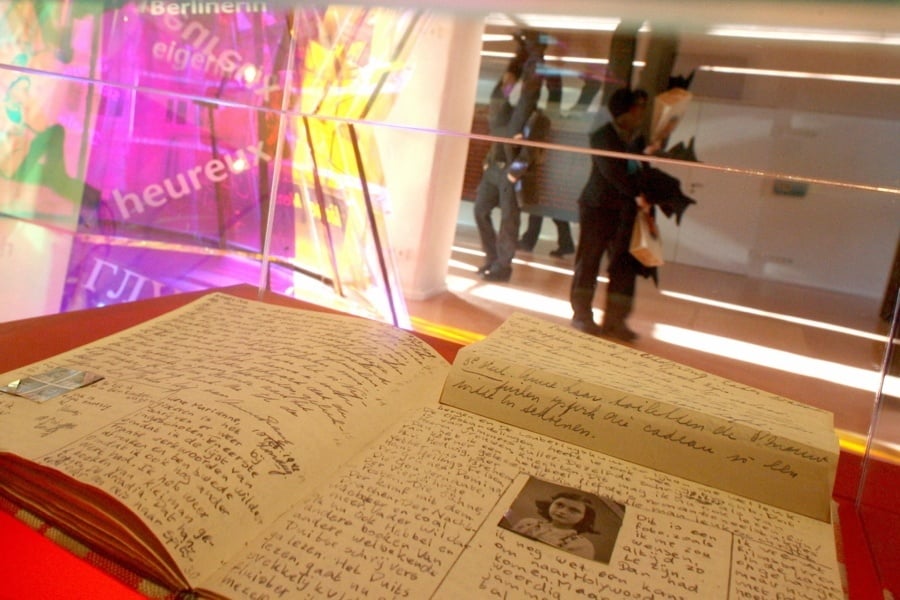 "Men are held in great esteem in all parts of the world, so why shouldn't women have their share?"

Above: A copy of the diary of Anne Frank at the Anne Frank Centre in Berlin.MICHAEL KAPPELER/AFP/Getty Images 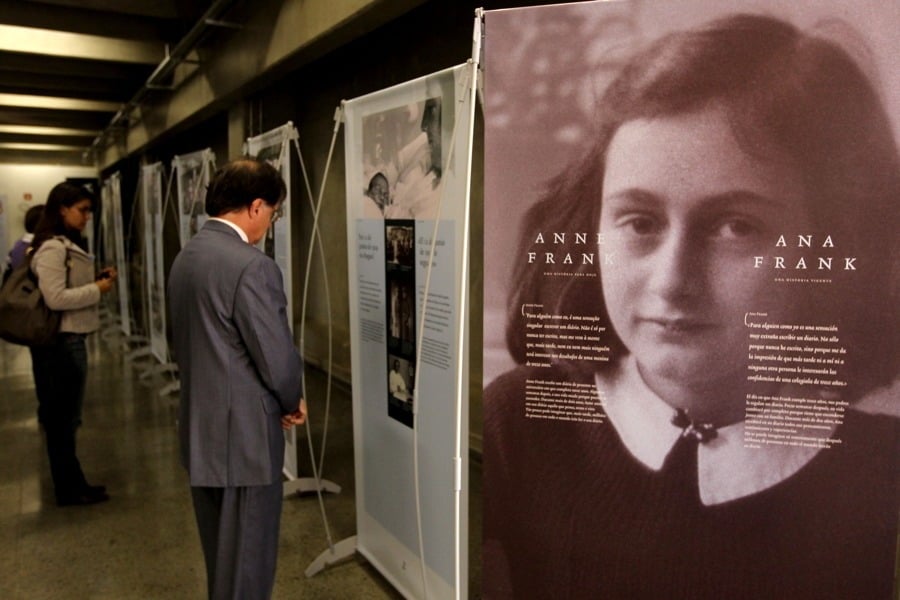 "Riches can all be lost, but that happiness in your own heart can only be veiled, and it will still bring you happiness again, as long as you live."

Above: People visit the exhibition "Anne Frank - A Story For Today," organized by the Anne Frank Foundation, at the Unified Educational Center (CEU) in São Paulo, Brazil.NELSON ALMEIDA/AFP/Getty Images 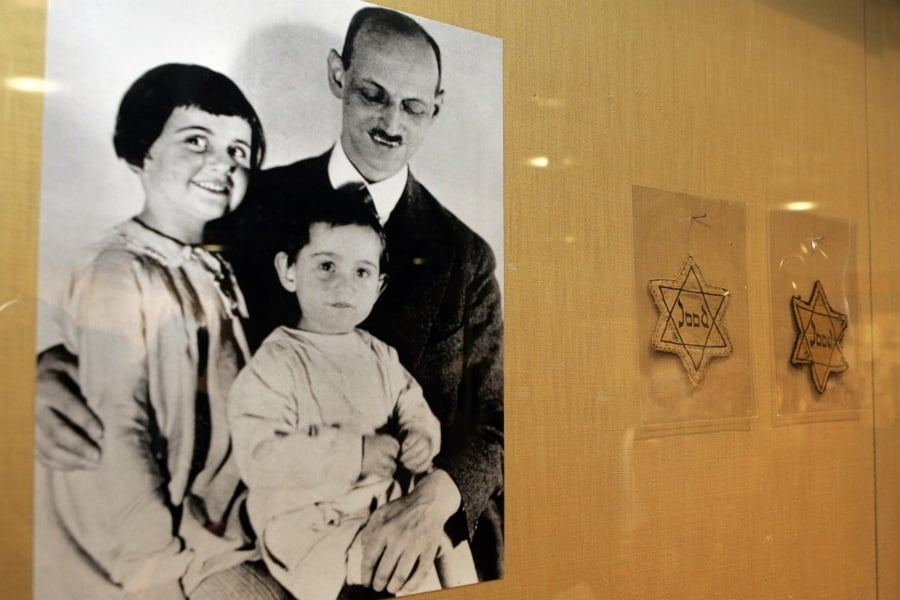 "I must uphold my ideals, for perhaps the time will come when I shall be able to carry them out."

Above: A photograph of Otto Frank (right) with his daughters Anne (center) and Margot (left), along with yellow stars worn by Dutch Jews (far right), on display at the YIVO Institute for Jewish Research in New York.STAN HONDA/AFP/Getty Images 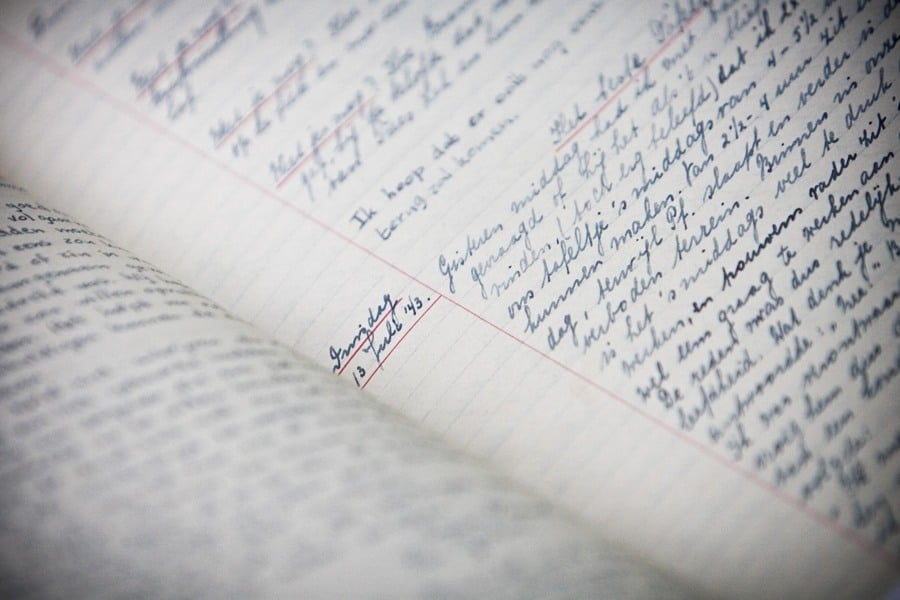 "As long as you can look up fearlessly into the heavens, as long as you know that you are pure within...you will still find happiness."

Above: Anne Frank's facsimile diaries on display at the Anne Frank House in Amsterdam.ADE JOHNSON/AFP/Getty Images 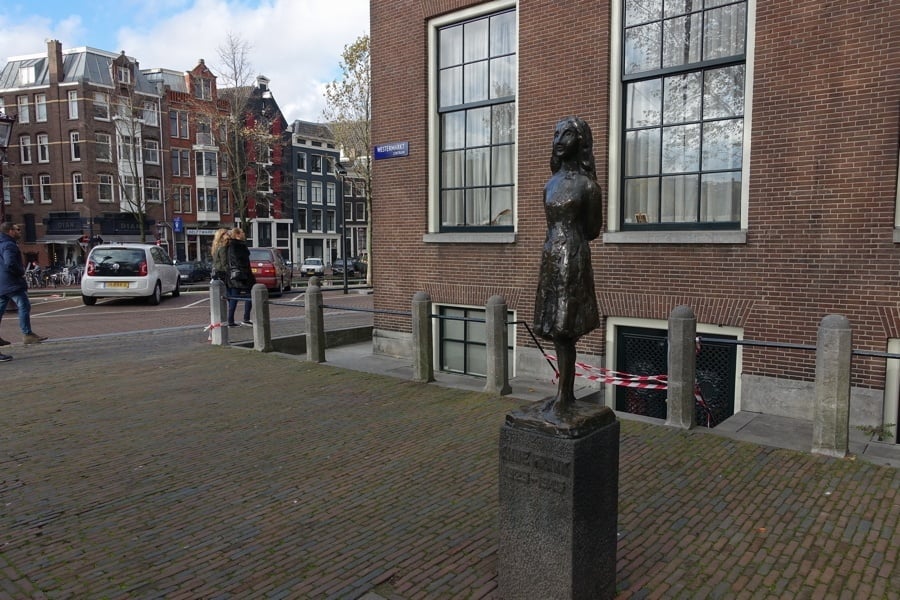 "I know that I'm a woman, a woman with inward strength and plenty of courage." 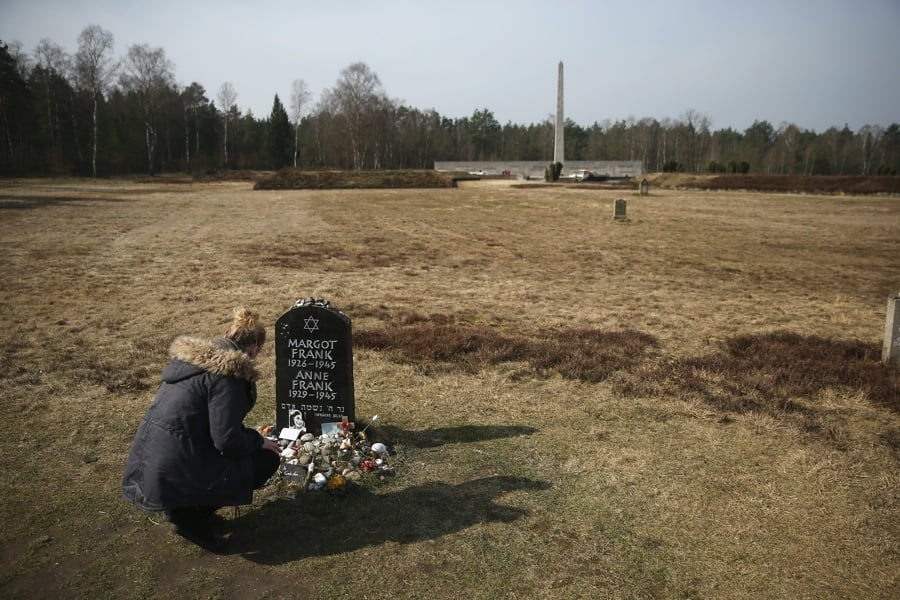 "I firmly believe that nature brings solace in all troubles."

Above: The grave of Anne Frank and her sister Margot.Sean Gallup/Getty Images 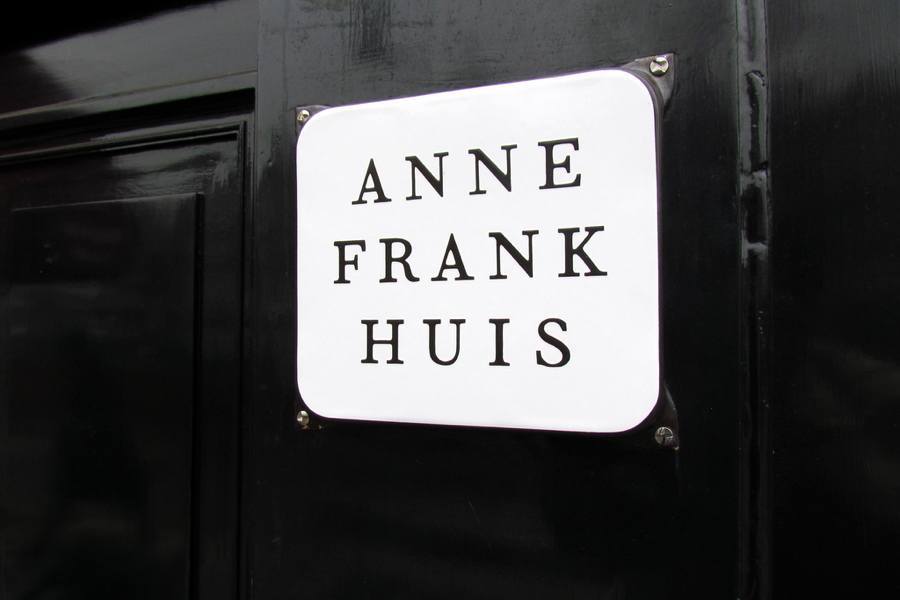 "I don't think of all the misery but of the beauty that still remains."

Above: The placard outside the Anne Frank House in Amsterdam.David Berkowitz/Flickr 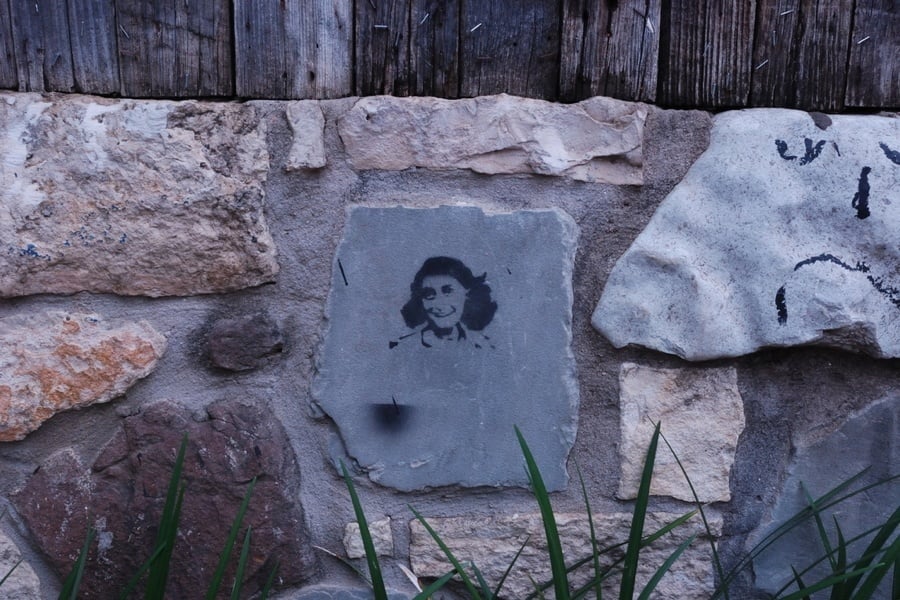 "Even if people are still very young, they shouldn't be prevented from saying what they think." 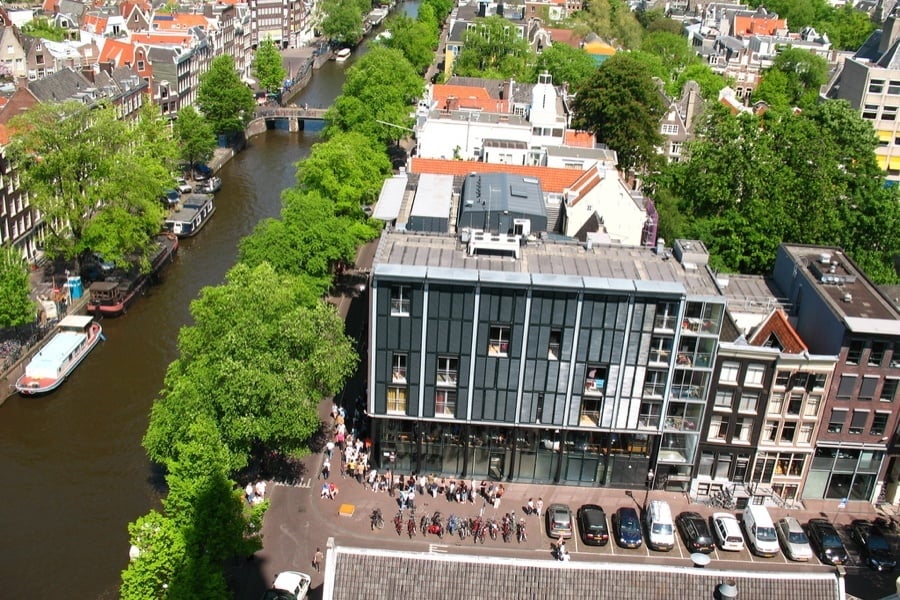 "Parents can only give good advice or put them on the right paths, but the final forming of a person's character lies in their own hands."

Above: The line at the Anne Frank House in Amsterdam wraps around the block.Bogdan Migulski/Flickr 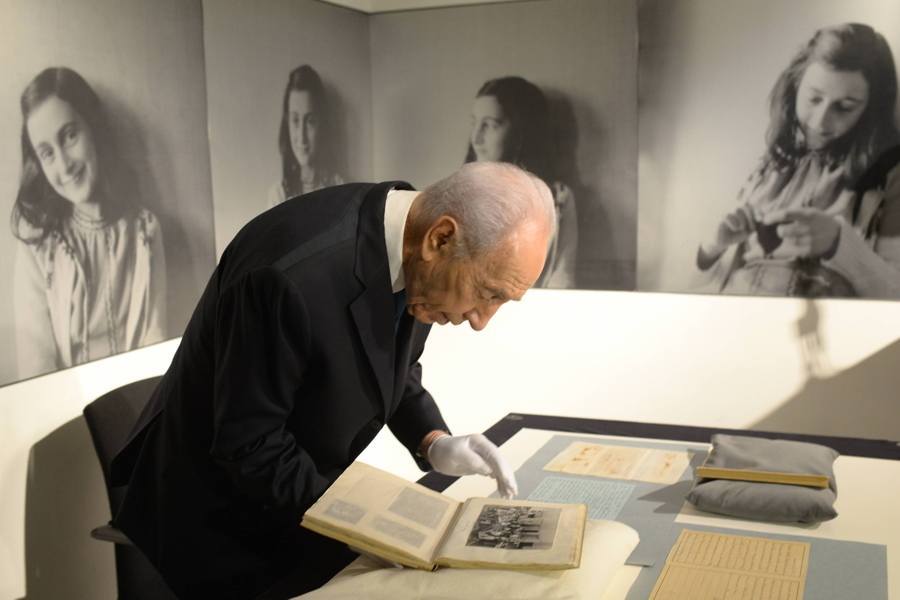 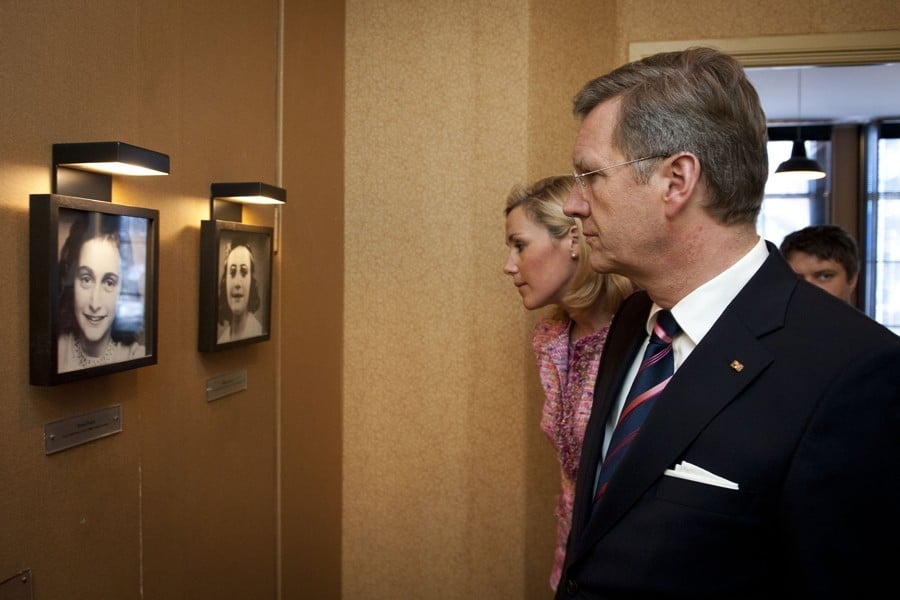 "We're all alive, but we don't know why or what for; we're all searching for happiness; we're all leading lives that are different and yet the same."

Above: German President Christian Wulff and his wife Bettina look at a photo of Anne Frank at the Anne Frank House in Amsterdam on March 23, 2011.Steffen Kugler/Bundesregierung-Pool via Getty Images 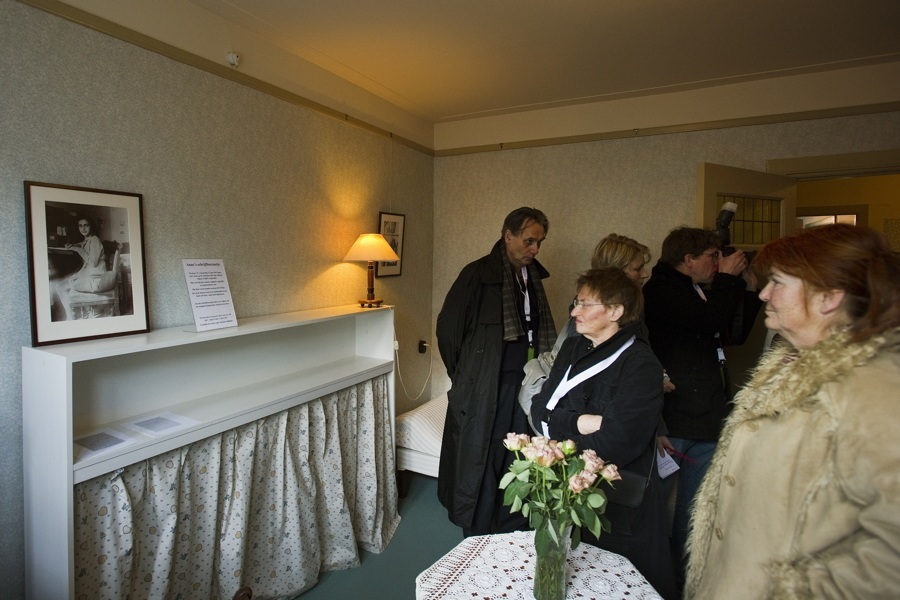 "People are just people, and all people have faults and shortcomings, but all of us are born with a basic goodness."

Above: Visitors look at the picture of Anne Frank in the Amsterdam apartment where she and her family lived for nine years before going into hiding due to the Nazi occupation.TOUSSAINT KLUITERS/AFP/Getty Images 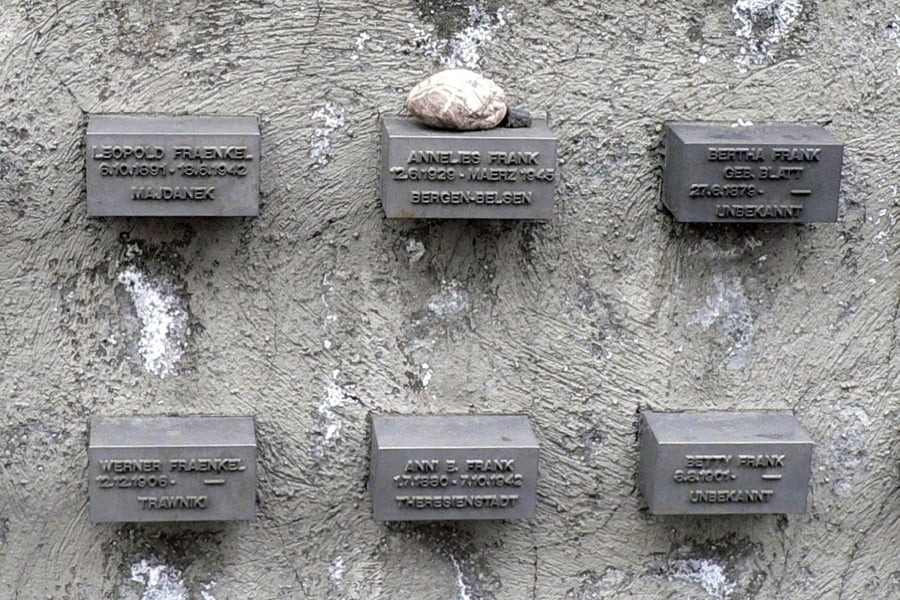 "It seems to me that later on neither I nor anyone else will be interested in the musings of a thirteen-year-old girl. Oh well, it doesn't matter. I feel like writing."

Above: A memorial to all the victims of the Holocaust from Frankfurt, Germany, with Anne Frank's at top center.Wikimedia Commons 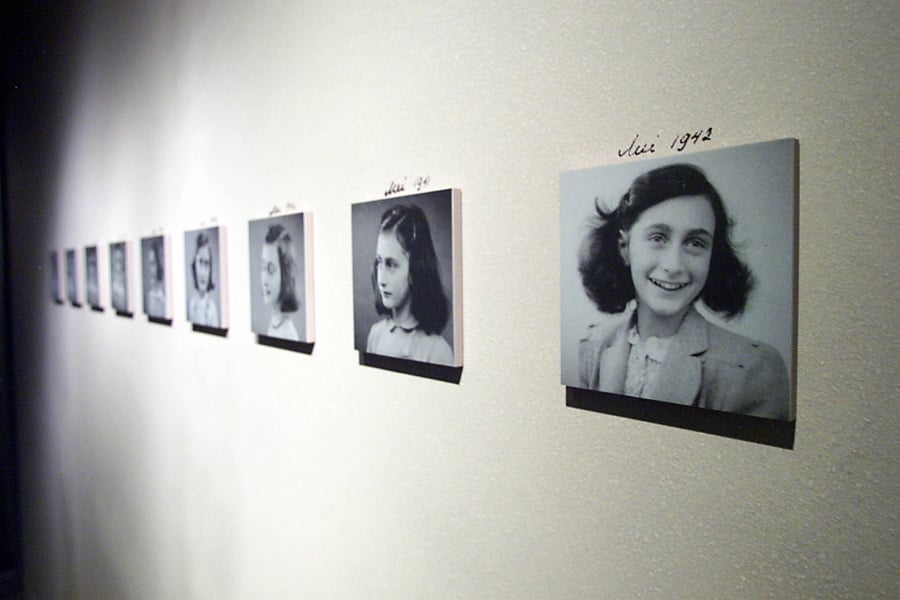 "What is done cannot be undone, but one can prevent it happening again." 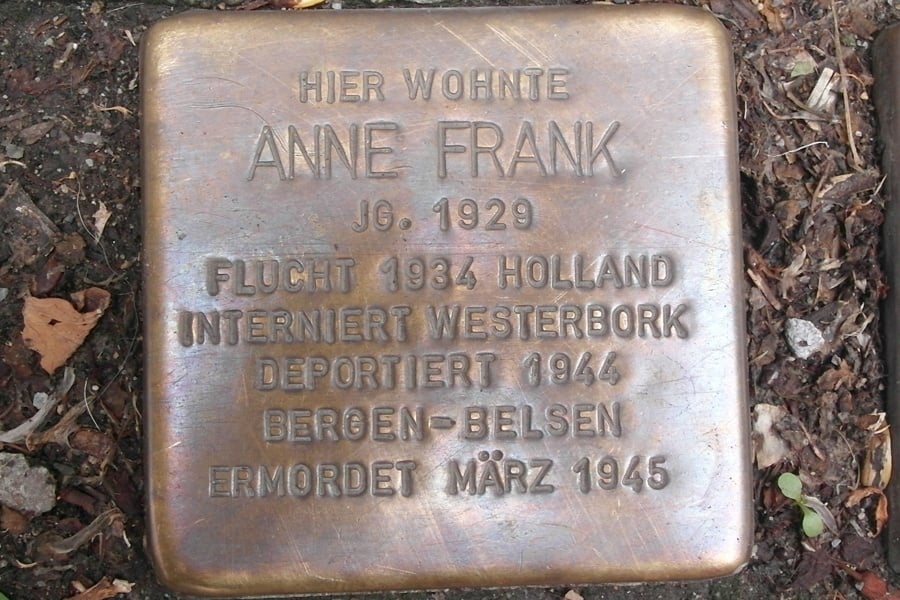 "Let me be myself and then I am satisfied."

Above: Memorial stone outside the house in Aachen, Germany where Anne Frank lived with her grandmother in 1933.Wikimedia Commons 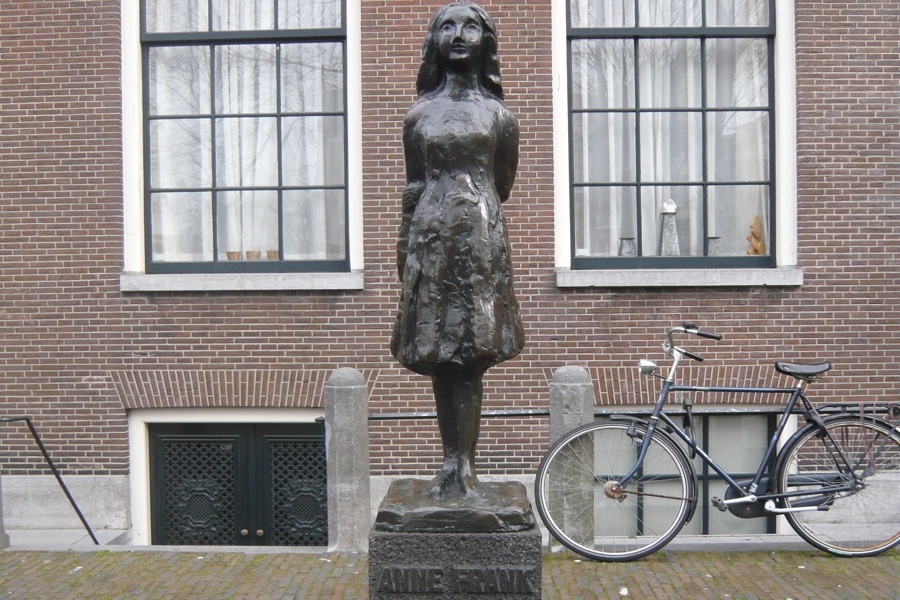 "Laziness may look inviting, but only work gives you true satisfaction." 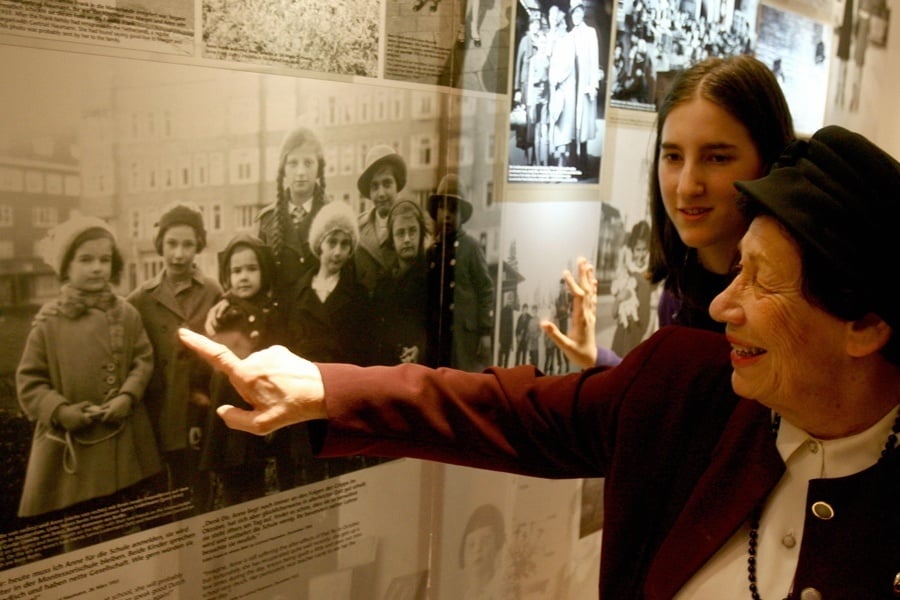 "It's a wonder I haven't abandoned all my ideals, they seem so absurd and impractical. Yet I cling to them because I still believe, in spite of everything, that people are truly good at heart." 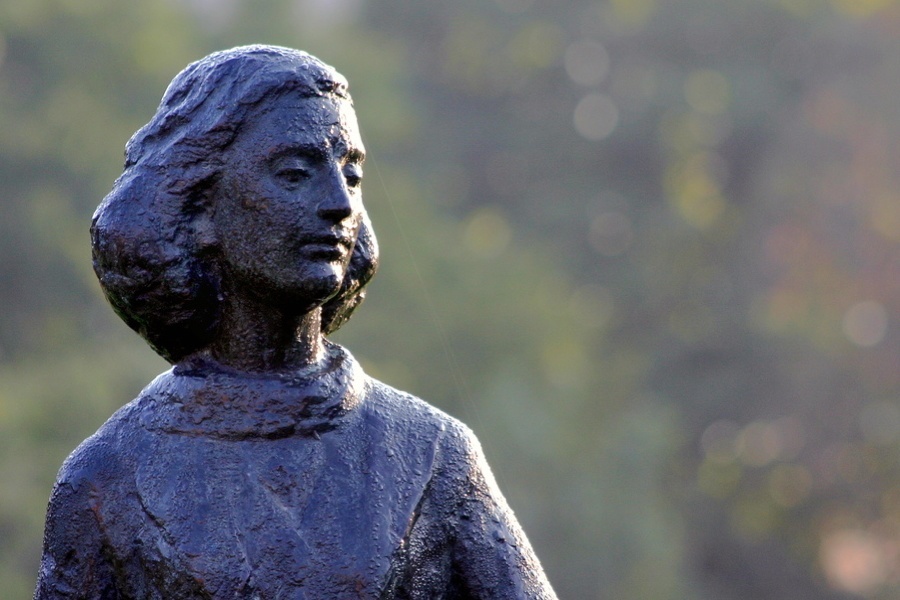 "People can tell you to keep your mouth shut, but it doesn't stop you from having your own opinion."

Above: Anne Frank statue in Amsterdam.Thomas/Flickr 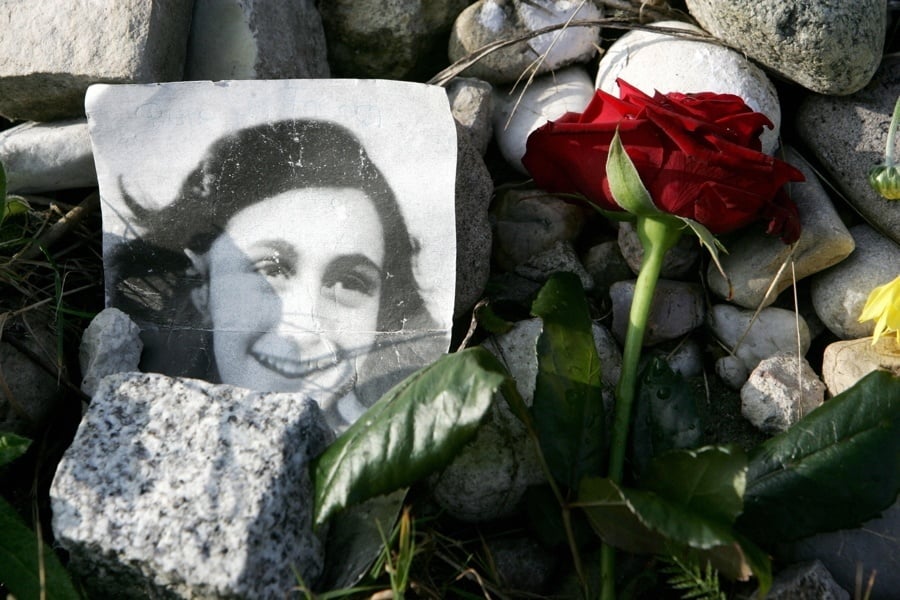 "Human greatness does not lie in wealth or power, but in character and goodness."NIGEL TREBLIN/AFP/Getty Images

After reading these quotes by Anne Frank, see photos of Anne Frank's life, then check out some more of our best quotes galleries, from interesting quotes that changed the world to 45 of history's most famous and hilarious insults.